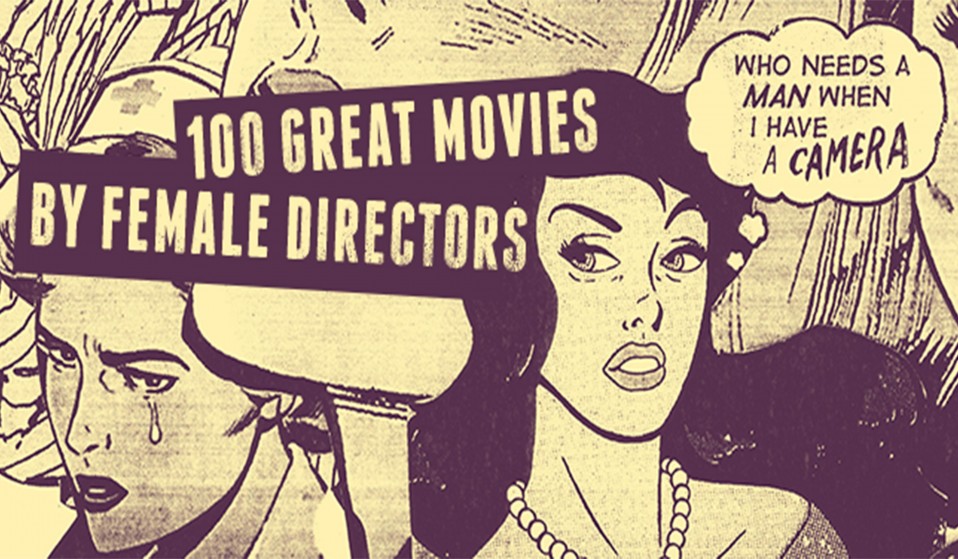 There was a scramble at Huck HQ when Little White Lies told us about their 100 Great Movies by Female Directors series. We saw their list, spanning more than a century of cinematic excellence, and then fought (quite nicely) amongst ourselves over our favourites.

In the end it was impossible to agree on ten true standouts – the list was too long and too strong for any real compromise. So we offered the process up to the gods of personal preference, leaving it to each writer’s whims rather than any sort of mathematic process. Some of of these directors – Miranda July and Tamra Davis, for example – have featured in Huck before. Others, we’ve been waiting for years to write about.

The debut flick from artist, punk, writer and all-round indie culture queen, Me and You and Everyone We Know is a strange and unsettling tale about the ambitions, visions and desires of a bunch of repressed characters living in the suburbs. It launched July as the auteur of her own genre – a sort of surrealist normcore – and follow-up projects The Future and The First Bad Man show the evolution of her style; raw, kitsch and soul-searching. Shelley Jones

As the daughter of iconic director Francis Ford Coppola, Sofia Coppola had a lot to live up to. Thankfully – instead of attempting to imitate her father’s epic, macho oeuvre – Sofia burst onto the ’90s movie scene with The Virgin Suicides, showing a totally different approach. Her second film Lost in Translation is, in my opinion, one of the greatest films of the naughties, exploring globalised culture and modern malaise with patience, pathos and space for contemplation. Sofia’s films are stylish, subtle and intellectual; the authentic observations of a child brought up in hotels and on red carpets. SJ

Ever felt trapped as a teenager? Andrea Arnold’s gripping Fish Tank takes place on a forgotten Essex estate where everyone, in one way or another, is searching for an escape. For lead Mia (stunning newcomer Katie Jarvis), her way out is cheap corner-shop cider until she spots a dance audition which offers her the chance to reveal her talent. But suffocated by her toxic surroundings, including her mother (Kierston Wareing) and her suspect new partner Connor (Michael Fassbender), everything seems set up to shatter her hopes. Alex King

Meth addiction has long been a muse for Hollywood and TV, but where Breaking Bad rendered the epidemic in saturated glamour shots and cartoonish caricatures, filmmaker Debra Granik takes a subtler approach, casting drug addiction in it’s rightful role as a slow-creeping and insidious, poisonous tumble-weed. Winter’s Bone is a stark portrait of the Ozarks – a rural abyss between Missouri and Arkansas where America’s poverty line drops dangerously low – as captured through the eyes of seventeen-year-old Ree Dolly (Jennifer Lawrence), who is forced into the role of family guardian thanks to a catatonic mother and an absent meth-manufacturing dad. Echoing Ken Loach, Winter’s Bone forgoes neat endings – the resolution-and-redemption story arc that pays Hollywood’s bills – and instead leaves you with the suckerpunch of a bleak and haunting realism that never ends. Andrea Kurland

Euphoria comes from many places; a perfectly-timed song soaring through a party soundsystem, driving along the coast of a fine-as-hell beach with a sea breeze lapping your cheeks or flinging yourself from a plane 1000 feet above the earth. It’s also an emotion that’s notoriously difficult to recreate on film, especially when triggered by music. Mia Hansen-Løve’s Eden is one of the few films in recent memory able to capture the sweeping bliss that washes over you when time, space, and mood collide: that moment when you lose yourself in soul-stirring sound. Based on the true story of Hansen-Løve’s brother, an aspiring Parisian DJ during the late ‘90s and early 2000s, the film is strongest when characters and plot take a backseat to the arresting visuals mixing with a stellar soundtrack filled with the likes of Frankie Knuckles, Aly-Us and Byron Stingly. Worth a watch for the opening sequence alone, an emerald tribute to the power of house and disco, set in a forest straight out of an electronic fairytale. Gabriela Helfet

Clio Barnard’s debut used an innovative blend of documentary and re-enactment to tell the tragic story of working class playwright Andrea Dunbar. Actors brought to life audio interviews with Dunbar’s family as they recall conflicts with their talented but troubled mother on a deprived estate in Bradford, West Yorkshire before her early death aged just 29 in 1990. AK

In the two decades since Billy Madison’s release, Adam Sandler’s career has descended into a farce. But in 1995, he was still a valuable commodity, fresh from a hugely successful stint on Saturday Night Live and untarnished by the slurry of hackneyed trash that would come to define his career. The now-familiar tropes are all there in Billy Madison, Sandler playing a fish out of water, dragged over the line by a buxom but safe love interest. But Davis drew out every ounce of his potential, pushing him to the comic extremes that he’d so revelled in on SNL, turning almost every scene into an exercise in oddly endearing absurdity. It invented the clichés that now seem so obvious, like the Casablanca of dumb, sophomoric mindlessness. A worthy addition to Davis’ bizarre and unpredictable directorial career. Alex Robert Ross

Maya Deren’s Meshes of the Afternoon is a spookily ethereal, 13 minutes of surrealism through a creepy sieve. To boot, Deren was a pioneer of novel editing, distinct camera style and special effects techniques, at a time when ‘editing’ film meant physically slicing up the reel itself to rearrange the parts of each and every single frame you wanted to change. Technical achievements aside, over 70 years after its creation it still feels every bit as fresh and experimental as any released today which speaks to just how innovative Deren was, both as a storyteller, an editor, and a director. Meshes of the Afternoon has inspired countless others since its creation — a recent favourite is Janelle Monae’s kooky ‘Tightrope‘ music promo. GH

Before bringing two Aurora, Illinois rawk homebros to the masses, director Penelope Spheeris was best known for her documentaries on UFOs, prison life, and the LA punk scene. The entire film feels like a budget lo-fi cable access doc – in the best sense. Started as a short bit on sketch comedy show Saturday Night Live, Wayne’s World catapulted Mike Meyers into the Hollywood superstardom. But he couldn’t have done it without Dana Carvey, Tia Carrera and Co. The world was never to be the same after Wayne and Garth riffed on the iterations of The Babe, The Babe-raham Lincoln, The Babia Majora… or Cassandra threw down metal guitar riffs heavier than any dude in the place. Wayne’s World is what you wish and hope and pray suburban America is like: fuckin’ weird, but totally loveable, and always filled with endless schwingin’ babes. GH

“What if there is nothing to choose?” shouts hermaphrodite teen Alex as her parents clumsily attempt to push her towards gender-reassignment surgery and choosing whether to live the rest of her life as male or female. Lucia Puenzo’s blistering debut XXY addresses the fear of otherness and how people who don’t fit society’s neat categories often fail to find support, even from those closest to them. Inés Efron’s strong performance as Alex established her as an Argentine indie darling, when a new wave of Latin American cinema was putting the continent back on the map with refreshing new characters and perspectives. AK

Head over to Little White Lies for the full list of 100 Great Movies by Female Directors.

Linkedin
RELATED ARTICLES
OTHER ARTICLES
Photographer David Corio’s archive offers a glimpse inside a revolutionary era of music and nightlife.
Thousands of protestors gathered in Westminster to express their sadness and fury at the fatal police shooting of a young Black man in Brixton.
As the Scottish government announces a rent freeze, an activist with Living Rent who fought and won shares how they did it, and what must come next.
For over a decade, gamblers have won big by employing people to place live bets from the court. But does this dubious method still work?
Thousands attended the annual event this year to wheelie through the city and call for ‘knives down, bikes up’.
In his 2008 series, the photographer pictured himself as Angela Davis, Martin Luther King Jr., Malcolm X, and other prominent figures.