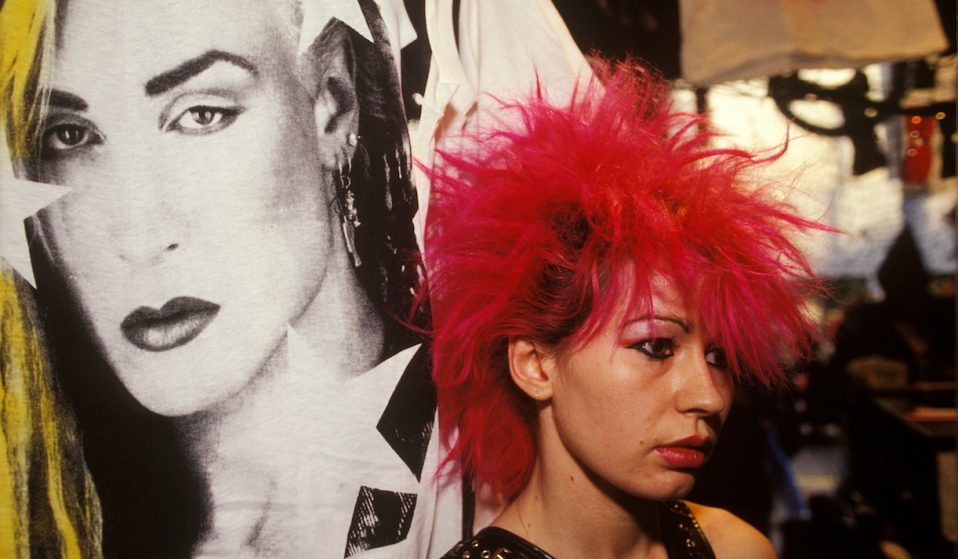 Photographer Homer Sykes is crowdfunding for a new book consisting of some his most striking magazine commissions, which together form a vibrant patchwork of the many different sides to life across the country during the Thatcher era.

Photographer Homer Sykes is crowdfunding for a new book consisting of some his most striking magazine commissions, which together form a vibrant patchwork of the many different sides to life across the country during the Thatcher era.

The 1980s and ’90s was a golden age for magazines, and at the time, British-Canadian photographer Homer Sykes was riding high on a wave of commissions. “People seemed to have a lot of money, and they were spending very freely,” recalls Sykes of the Thatcher era. “It was a very good time for some and not so good at all for others – and it was defined by that kind of contrast.”

Sykes first took to photography at school, where he grew up admiring the “more journalistic photographers” – among them, Henri-Cartier Bresson, Robert Frank and Garry Winograd. He later went on to study at the London College of Printing and Graphic Arts, which was where he developed a reverence for social documentary photography, a style he has stuck with for the duration of his 50-year long career.

Working mainly on magazine and editorial commissions, Sykes says he was “very, very rarely” in the studio, and “always out and about doing stuff”. Now, a Kickstarter has been set up for a new book, titled Colour Works – a collection of mainly commissioned images from Sykes’ time working as a busy photographer covering real-life stories, as well shooting hard news features, covering a period spanning the ‘80s and ‘90s.

From Manchester Pride to a Mayfair ball, many of the photos in the book show people celebrating and at leisure. “The pictures in the book are, by and large, of that hedonistic society,” confirms Sykes. It was also a politically fraught period: one photo in the book shows a billboard with a graphic of a blindfolded Margaret Thatcher, which reads: ‘2162000 UNEMPLOYED’. “In a way, sums up my view on the time,” says Sykes. “From Thatcher’s perspective, she just wasn’t seeing what was going on.” 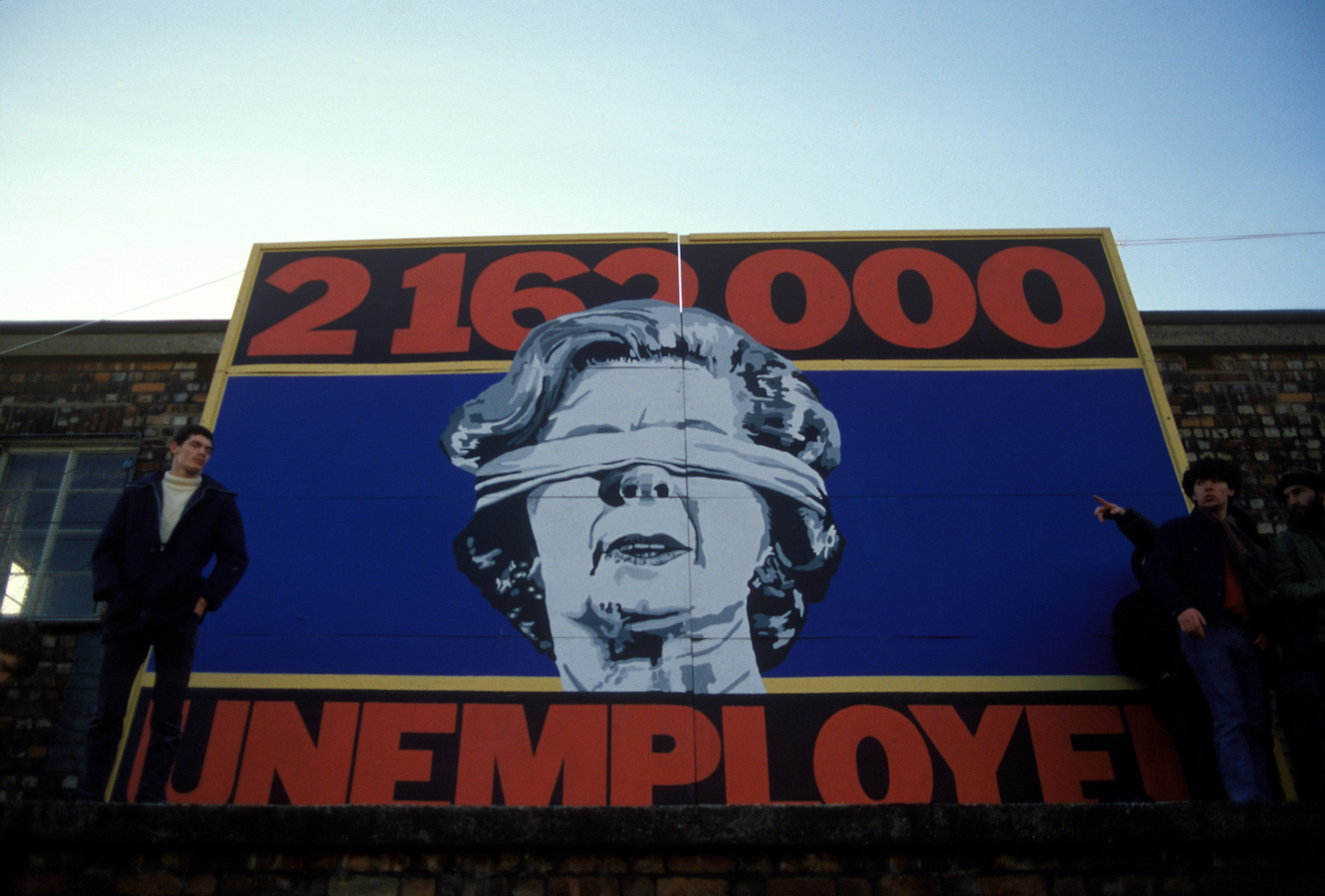 Liverpool, Lancashire, 1981. This banner was commissioned, designed and painted by Ian Denning for the Labour party. 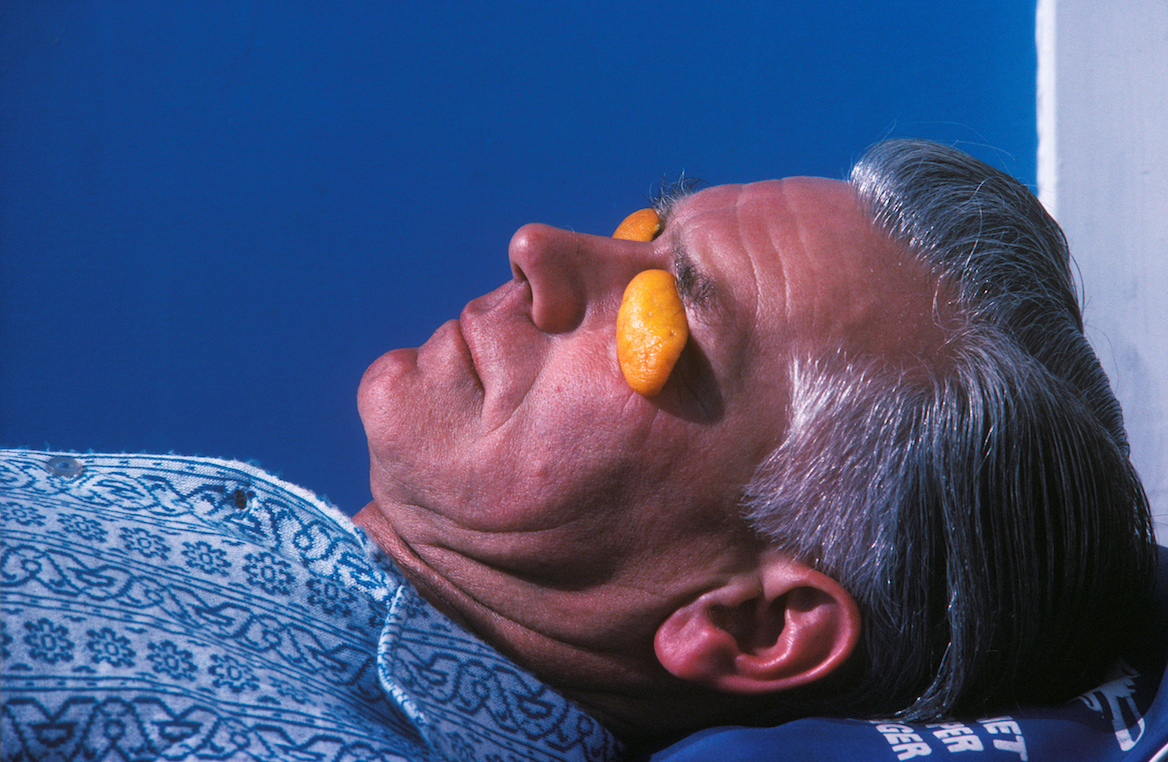 Sykes describes wanting to create images that would outlive their magazine shelf life, to serve as important social documents. This led him to cover major lifetime events, such as the Troubles in Northern Ireland. The photographer was in Ireland on-and-off over the year of 1981, covering the events there for American magazines such as Time and Newsweek, typically shedding light on stories that weren’t being covered in mainstream newspapers.

He recalls a particularly frightening moment during his time in Derry, when, after being invited by a group of Irish women he’d just met, he went to a party where he was pushed up against a wall and searched by the IRA. At the time, people were kneecapped or shot dead if they were suspected of being British informers. “You get into some scraps occasionally, and you’re lucky to get out,” he says, “and that’s just the way the cookie crumbles.” 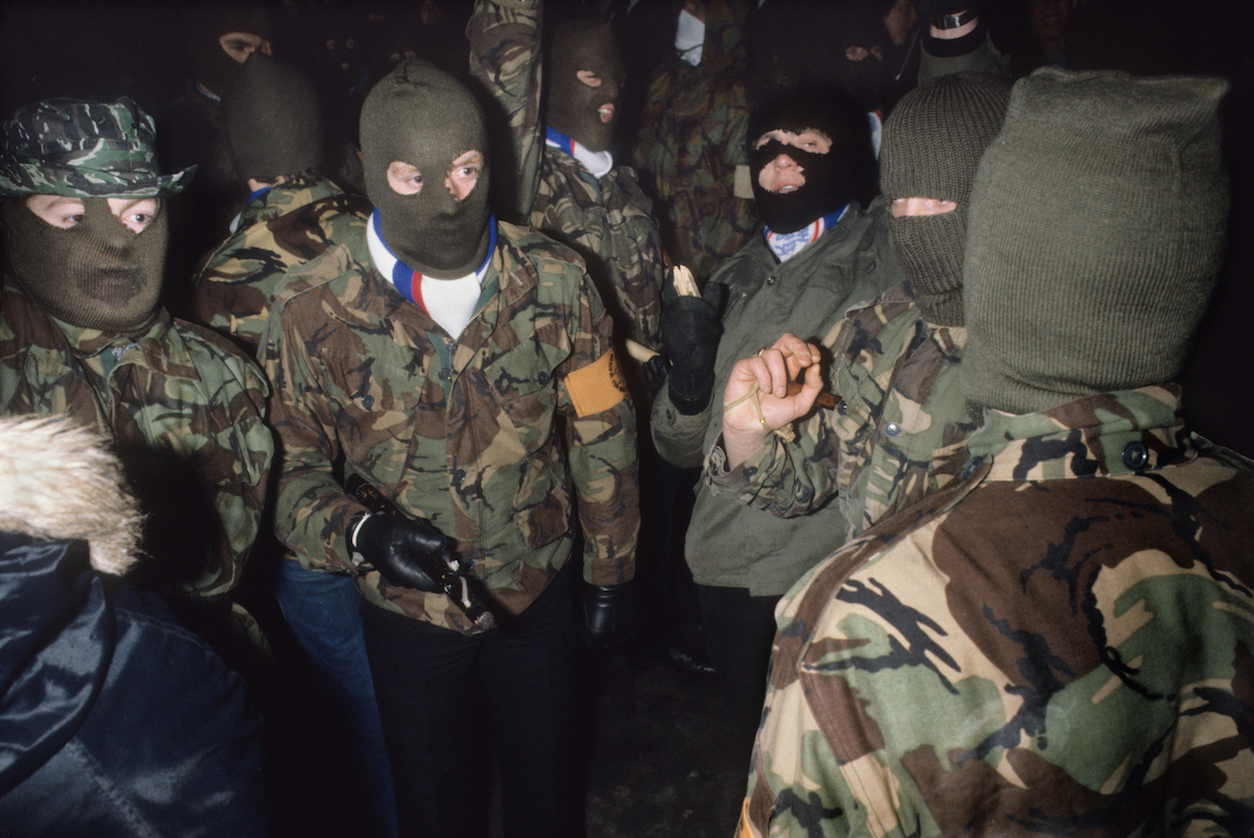 By travelling extensively across various parts of the UK and Ireland, Sykes’ books offers a diverse and colourful portrait of the country, with photographs of stockbrokers and lavish parties in Sandhurst and Belgravia placed alongside images of poverty and deprivation elsewhere. Rather than pitying his subjects, his photographs of working-class neighbourhoods constitute some of the most tender and empathetic in the book.

Among them, is a striking image taken of a heavily-pregnant woman, who can be seen holding hands with her child in an area of Hull home to fishermen and dockworkers. “I wanted to show the many different qualities of life,” Sykes says, “and to encapsulate a feeling in a single picture.” 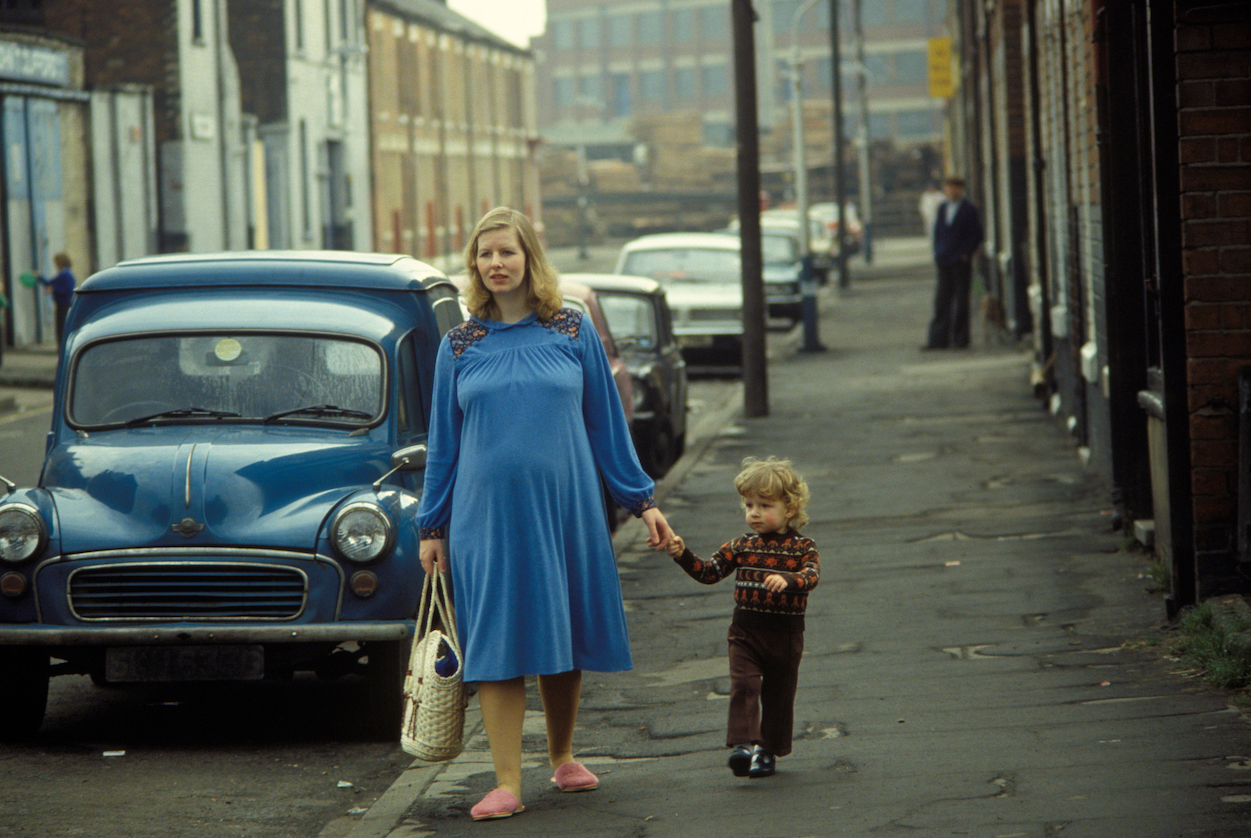 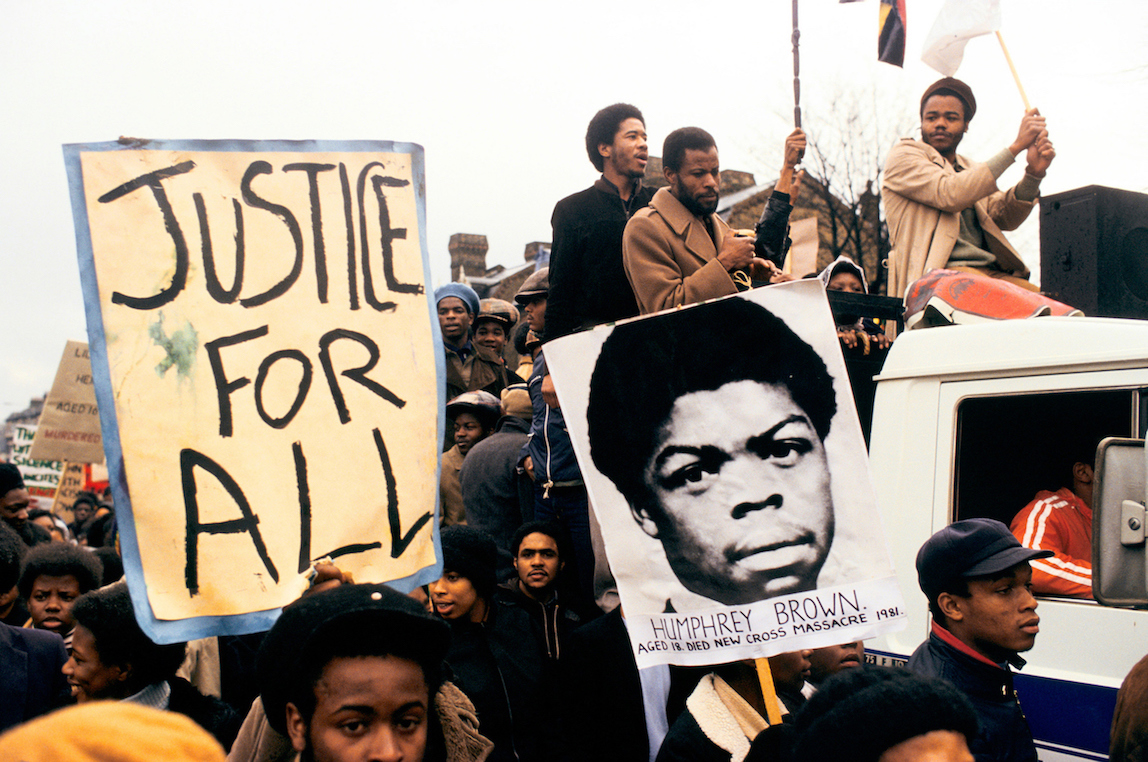 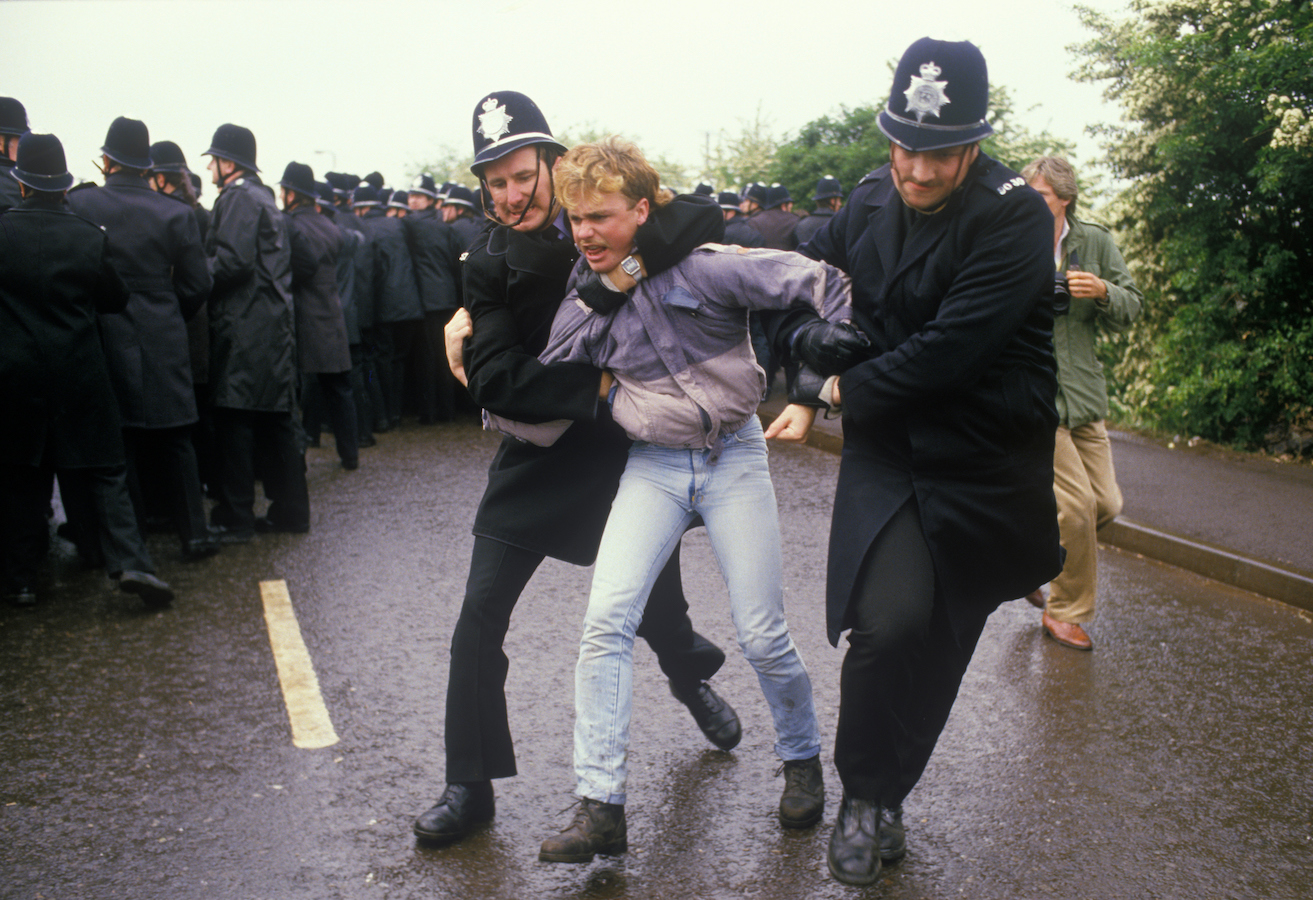 Orgreave, Yorkshire, 1984. The Battle of Orgreave was a violent confrontation on 18 June between police and pickets at a British Steel Corporation coking plant. 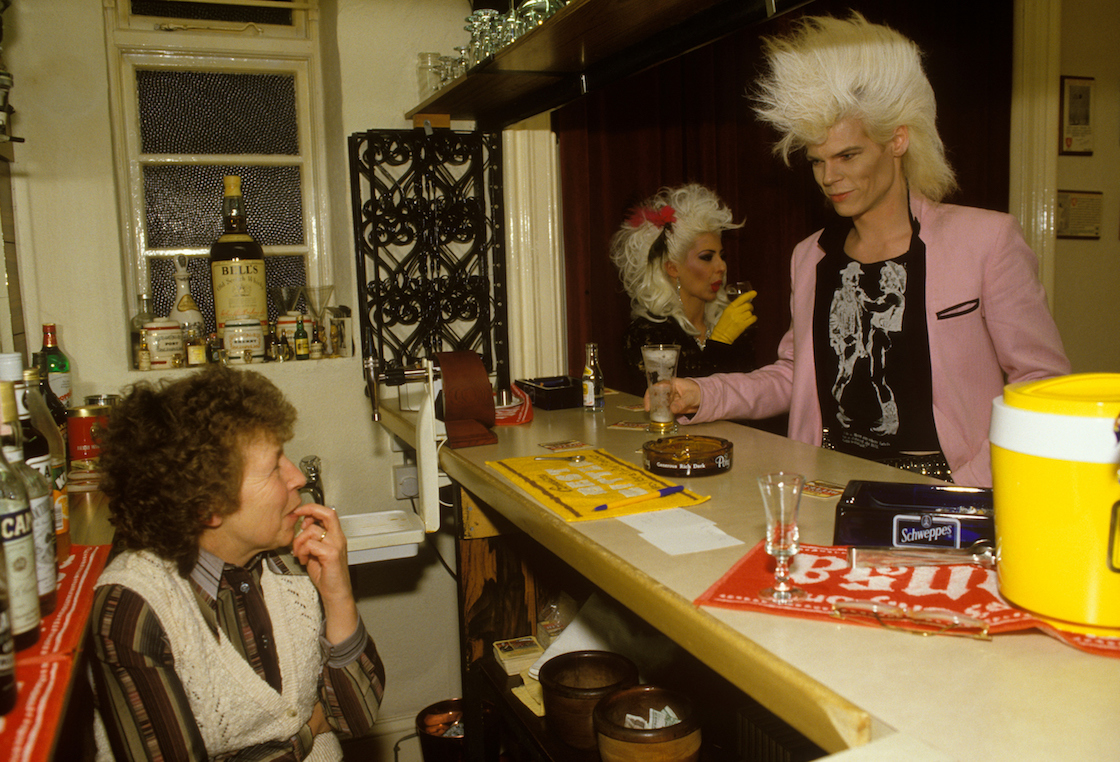 Newcastle upon Tyne, Tyne and Wear, 1986. Sigue Sigue Sputnik band members at the bar of a Cherton Hotel. 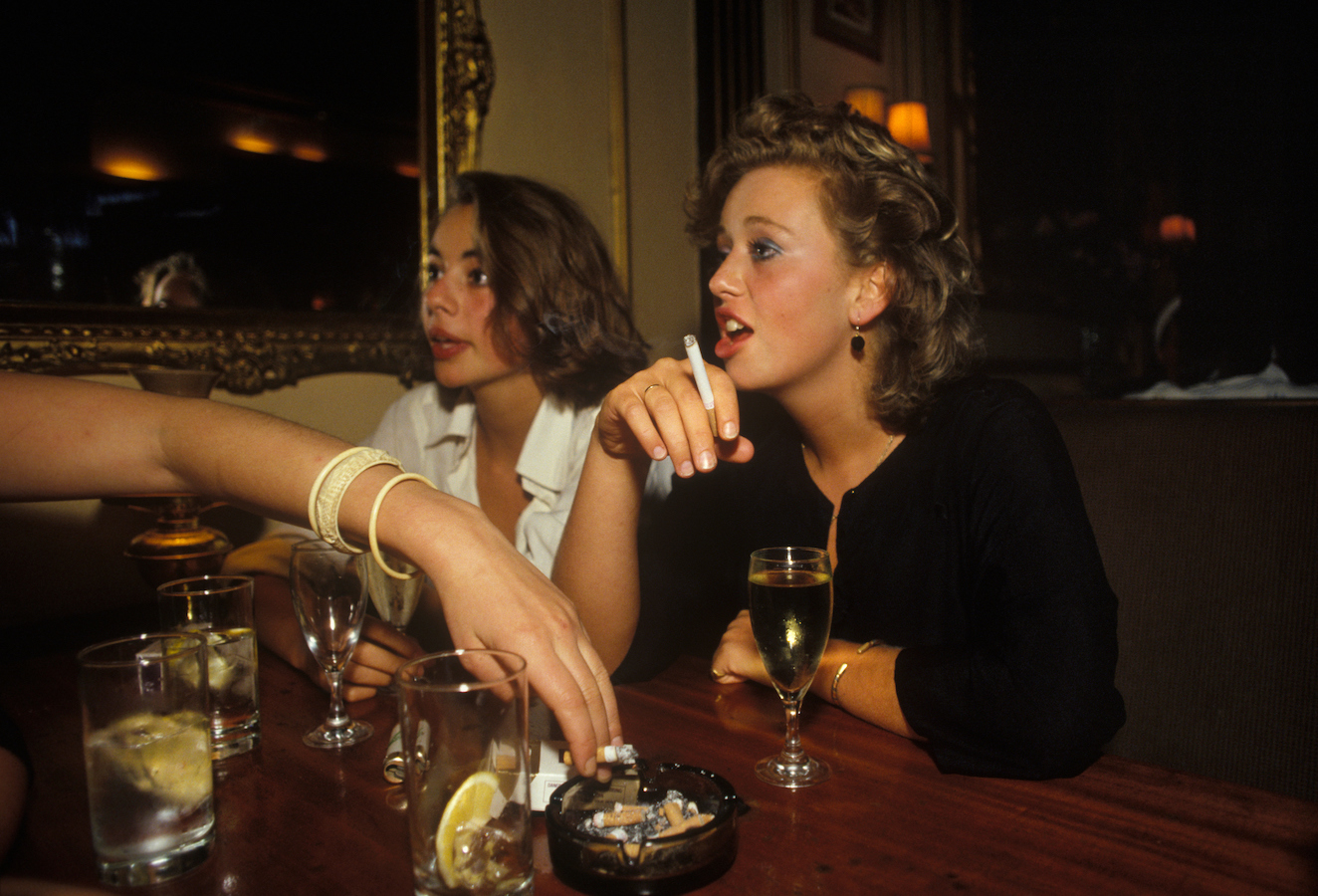 Kensington, London. 1983. Lucretia and her sister Sophie have been sent down to London from Shropshire to get a job. “Daddy will be furious unless we get one.” Meanwhile, they are living in a flat off the King’s Road in Chelsea, and are having a, “frightfully good time.” 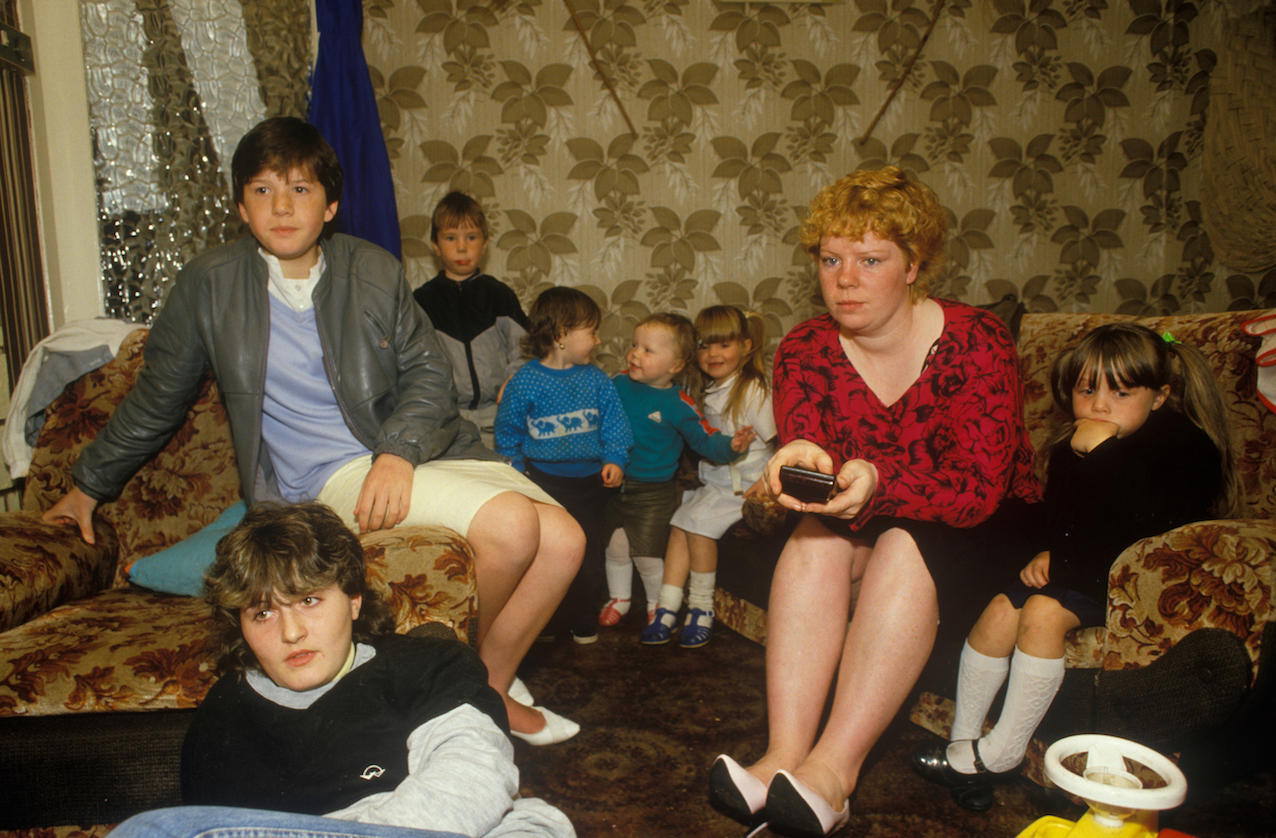 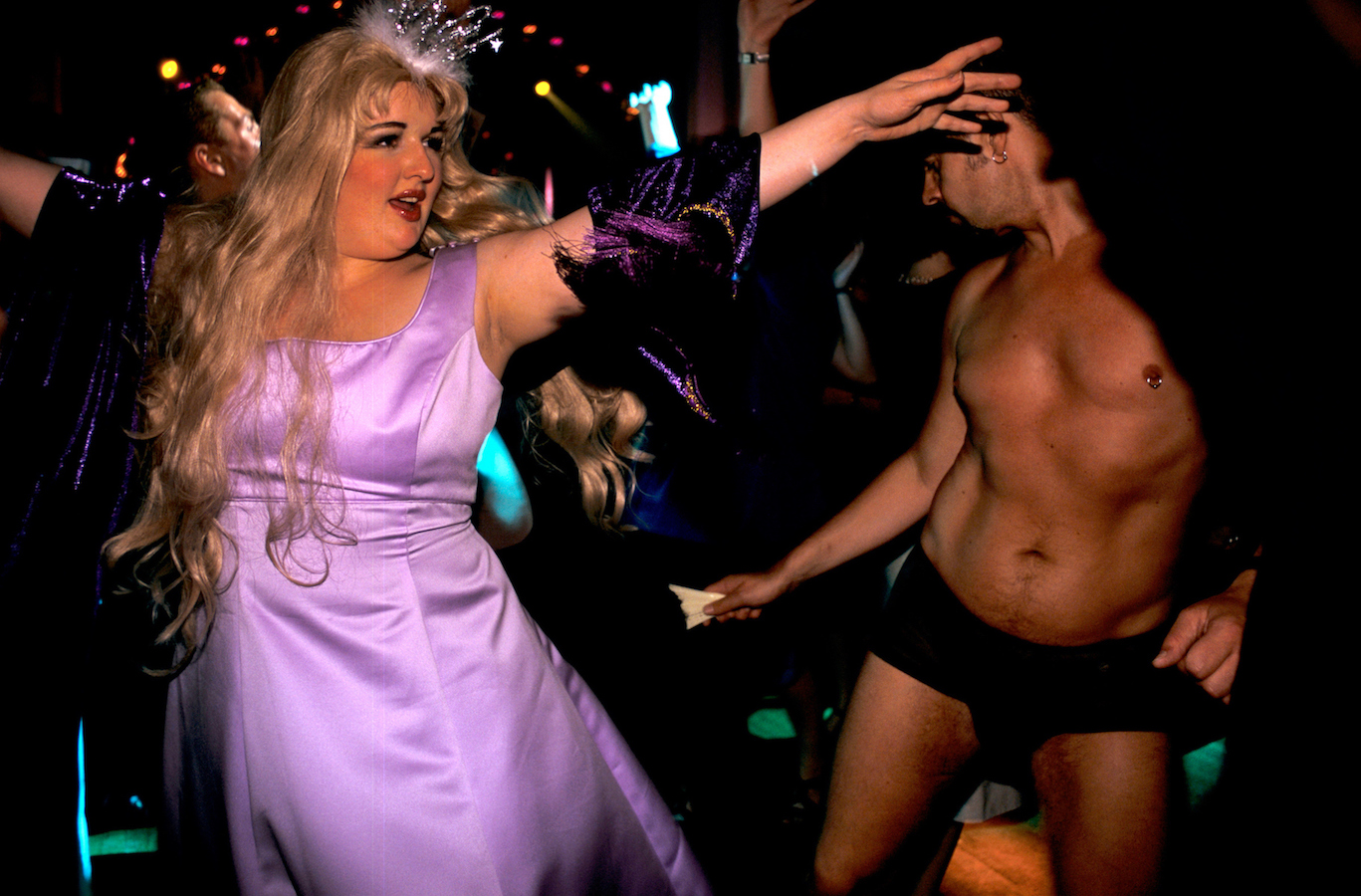 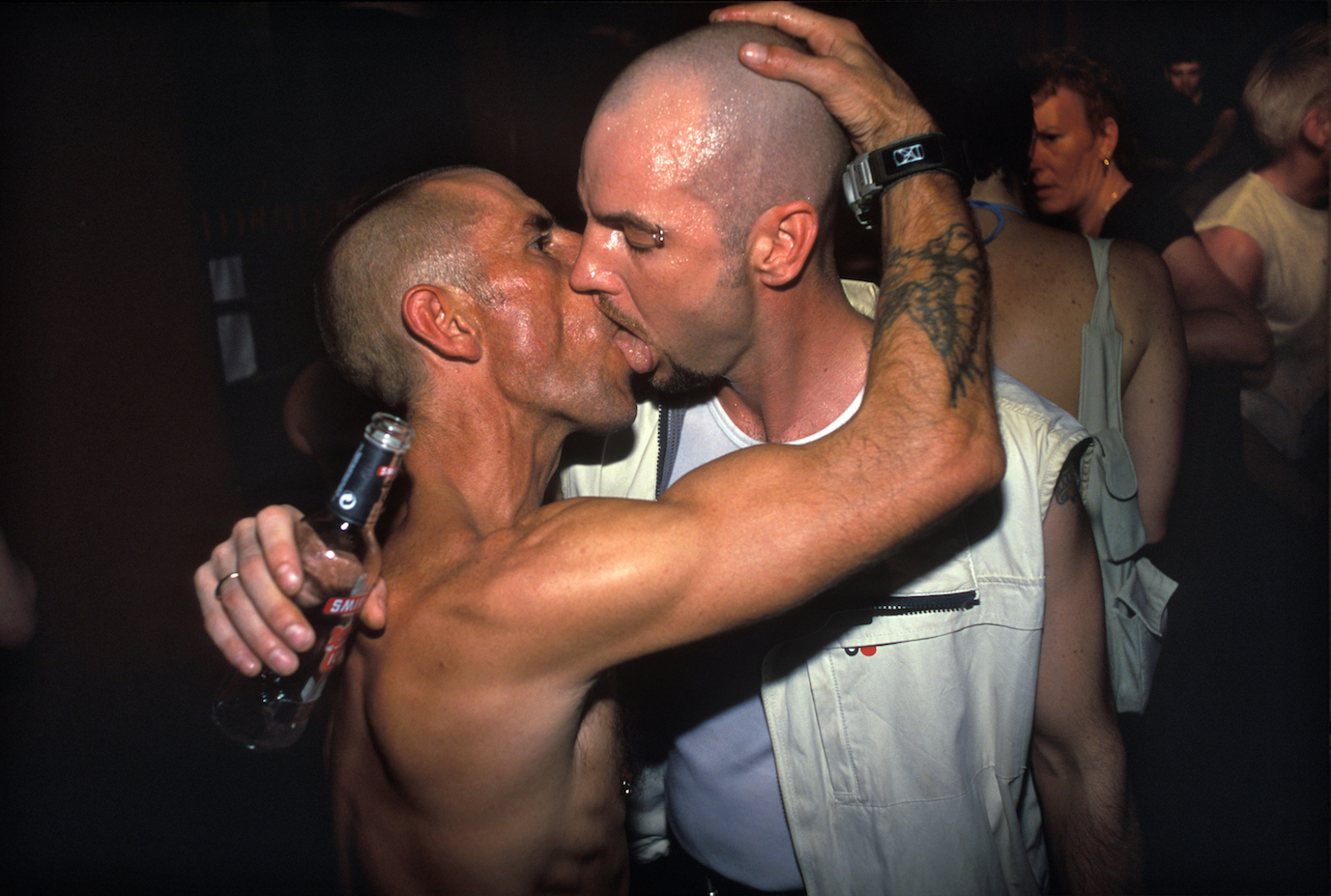 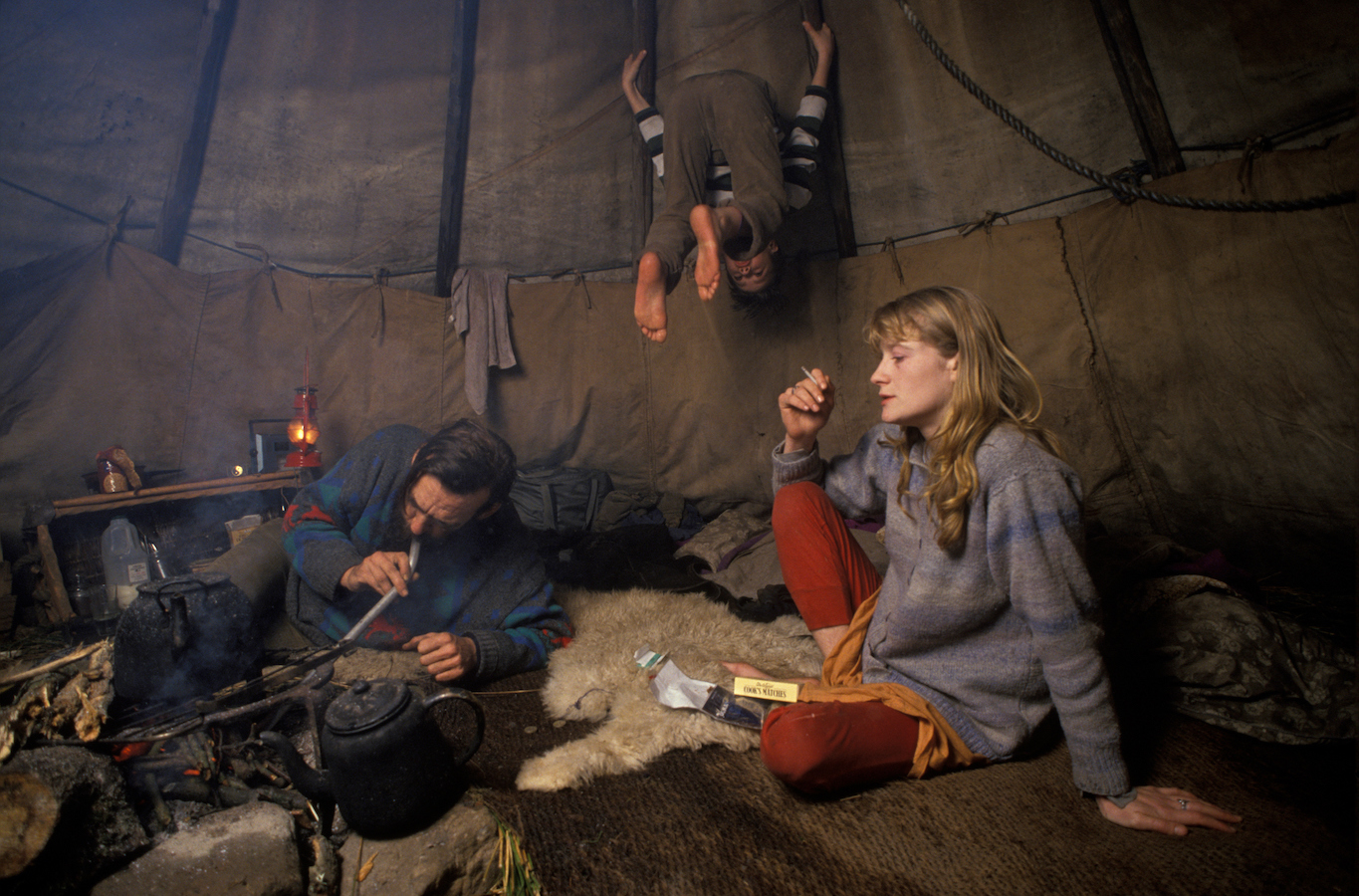 Llandeilo, Wales, 1980. Set in 70 acres, this eco-friendly Welsh hippy community was home to around 120 free spirits.

Donate to the Kickstarter for Colour Works here.

Linkedin
RELATED ARTICLES
OTHER ARTICLES
Following the release of his latest album God Don’t Make Mistakes, the rapper talks horror villains, police brutality and being unafraid to show his vulnerable side.
After news broke last week around an expected reversal of the 1973 landmark law that made abortion legal in the US, protestors gathered in the UK in support of American women.
Satirical culture in the UK routinely protects the powerful and punches down. It’s time people stopped laughing along, writes Elia Cugini.
Writers Matt Foot and Morag Livingstone explore how four decades of collusion between the government and the police have slowly eroded our right to protest.
Shifting the focus from the cost of living crisis to tackling obesity while many starve or freeze is farcical and pointless, writes Fatzine founder Gina Tonic.
Following the release of his newly republished 1991 book, Redheads, the American photographer reflects on his celebration of ginger people and their magnetic power.