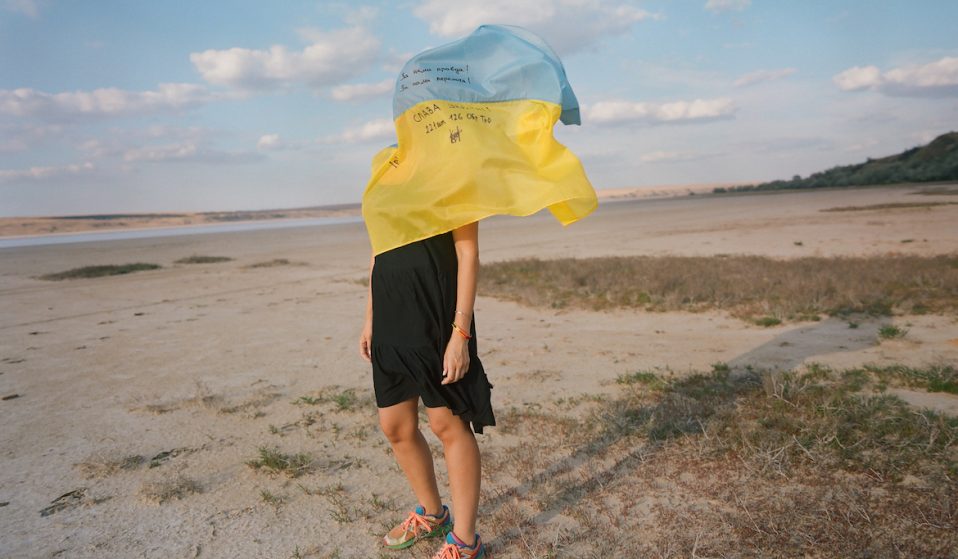 Photographer Ira Lapu recalls returning to her home country to document the lives of ordinary Ukrainians amid a brutal conflict.

Around 10pm on February 24 2022, Ira Lupu was sitting on a sofa in New York, the city where she had lived since beginning her photography studies. She was scrolling through Instagram, catching up on her emails when the worst possible news dropped. Russia had launched a full-scale invasion of Ukraine, her country of birth and where she had grown up and lived until just a few years before.

Her instant reaction was shock. “I don’t even remember the first two days – it was such a crazy stress,” she says. “There’s an enormous amount of reactions in the body that makes it completely useless – but the interesting side effect is you cannot resist of trying to be helpful.”

She quickly set about to work, creating a large shared document with a set of resources listing the different avenues people could assist in the war effort and organisations or volunteers to support. Posting it on social media, it quickly went viral as many Ukrainians and non-Ukrainians donated and co-ordinated efforts. 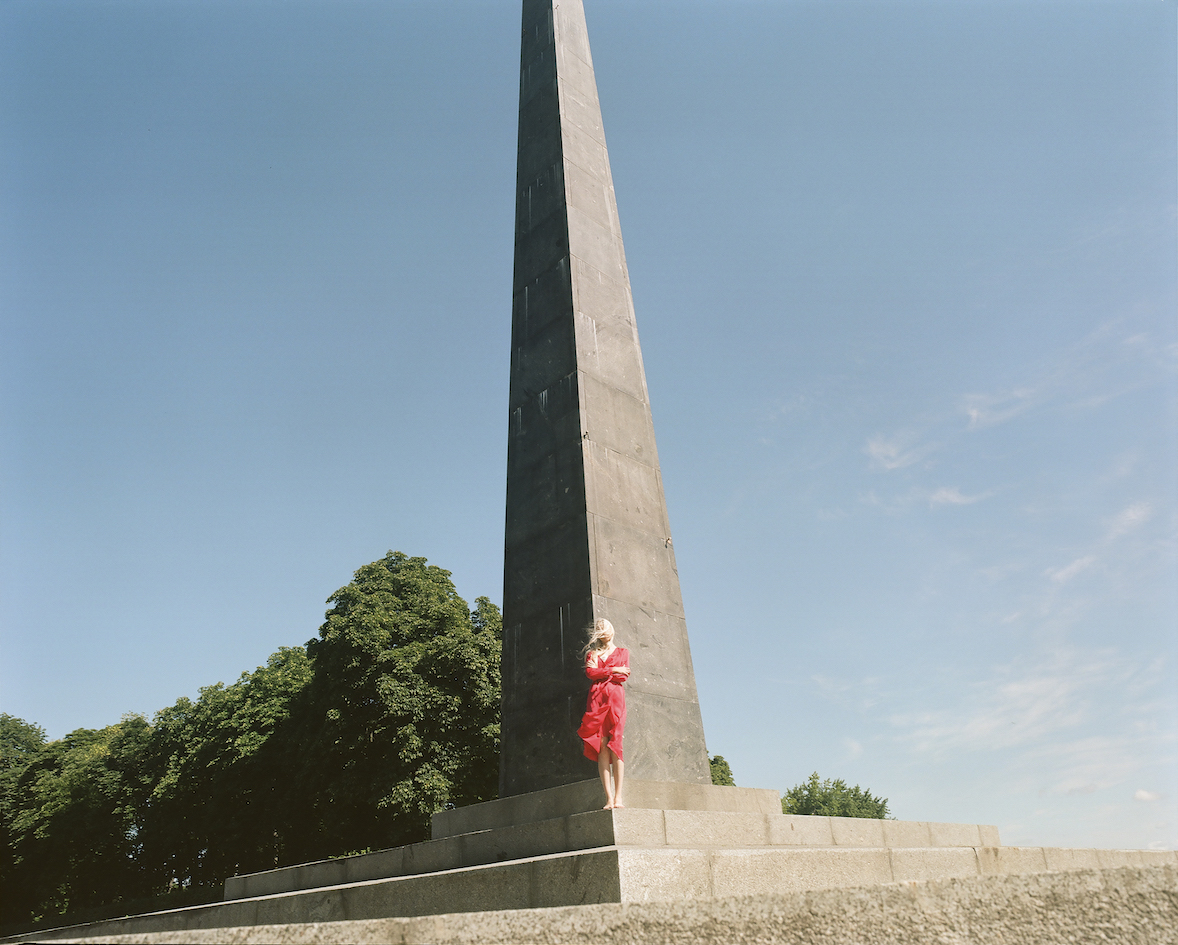 Artist Ksenia Bilyk by the Monument to the Unknown Soldier in Kyiv, Ukraine. 2022

While trying to help in any way she could from afar, a couple of months later she received some tragic news. Her mother, who had stayed in Lupu’s familial city of Odesa, contacted her to say that her grandmother had passed away. Despite the fact that the city was essentially under siege and at risk of falling, she decided to travel into the firing line to go to her funeral and help get her mother out of the country.

“I packed my whole New York life in two days,” she says. “By the morning I was in JFK [Airport] flying.

“My dad was calling me saying: ‘Don’t come – they could capture Odesa, it could happen now – it’s crazy,’ and I was like: ‘No I will go, I need to say goodbye,’” Lupu continues.

After attending the funeral, she made the journey to the border with her mother, but the two short days she spent in Ukraine sparked something within her. “I felt this very intense desire to come back,” she explains. “I needed to go back to spend time with my people – my country.” 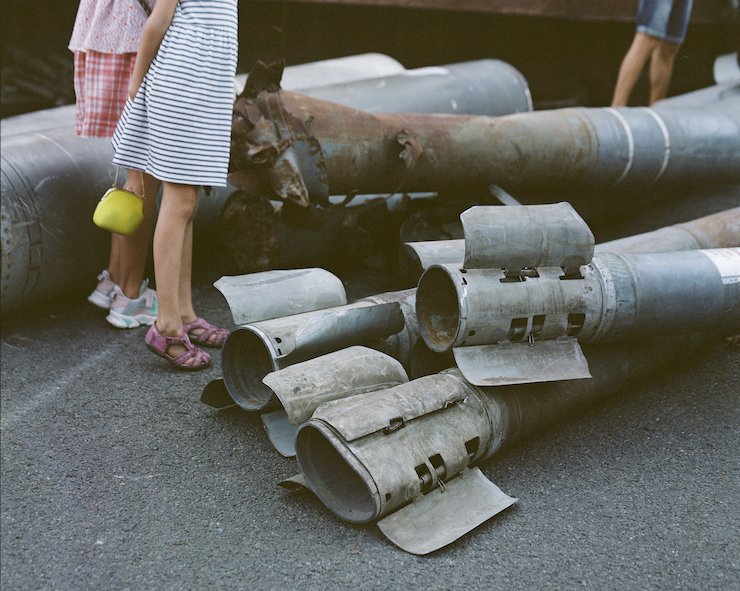 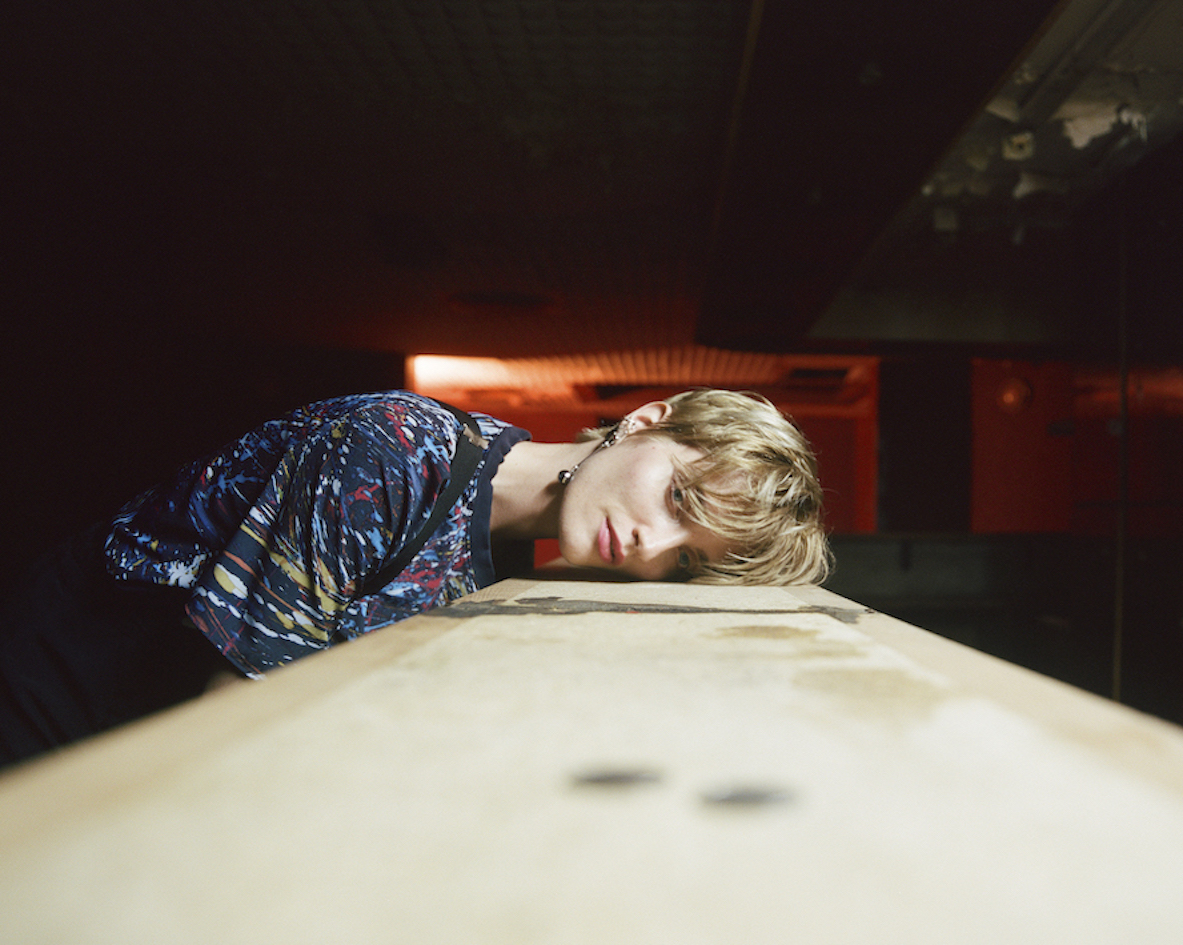 Anna Domashyna at the Hotel Zakarpattia. Myrhorod-born and Odesa-based, she had to relocate to Western Ukraine as an internally displaced refugee. Uzhhorod, Ukraine. 2022

So a month later in May, she returned to Ukraine along with her camera, while she roamed across the country, seeing family, friends and making new ones – starting in Odesa, to Kyiv, Irpin, Lviv, Bucha, Hostomel and beyond. Throughout her travels she documented the places she visited and the people that she met, with a number of Lupu’s pictures being exhibited at London’s Wembley Park in her new exhibition Time of Phoenix.

The photographs showcase a defiance and resilience in the face of conflict, destruction and brutality. Among the flipped cars, burnt out buildings and the unavoidable military presence, is a society dedicated to living their lives – despite a war that could take everything away without a second’s notice. 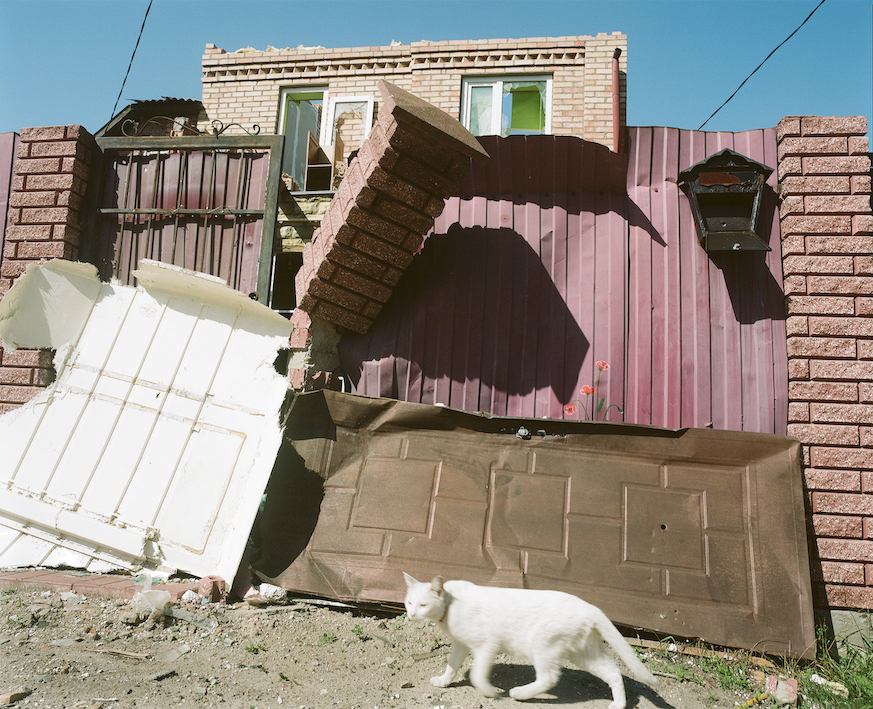 “When I was in Odesa they started shooting the sea ports, and I heard really loud explosions over my head – and you don’t know they may be shooting you and you might die,” Lupu says, nonchalantly. “But 10 minutes after that when it stopped I went to do my nails and facials because that’s life, you know?”

One photograph features a close up shot of a break dancer on Kyiv’s main square, with a crowd gathered around him as he contorts his body backwards. Although on first glance it looks like it could have been taken in a square in Paris or Berlin – its context is wildly different to a normal day in a western European city.

“It was Independence Day in Ukraine, which is always a big celebration but particularly on that day everyone was waiting for a big attack to happen,” she says. “A lot of people left Kyiv – but a lot of people went to celebrate, and those dancers were celebrating.

“Literally behind my back as I took this picture there was this huge parade of destroyed Russian military tanks,” she continues. “I felt a lot of this willingness to live a normal life regardless of what was happening – a lot of resilience, being fierce – like you’re not going to break us.” 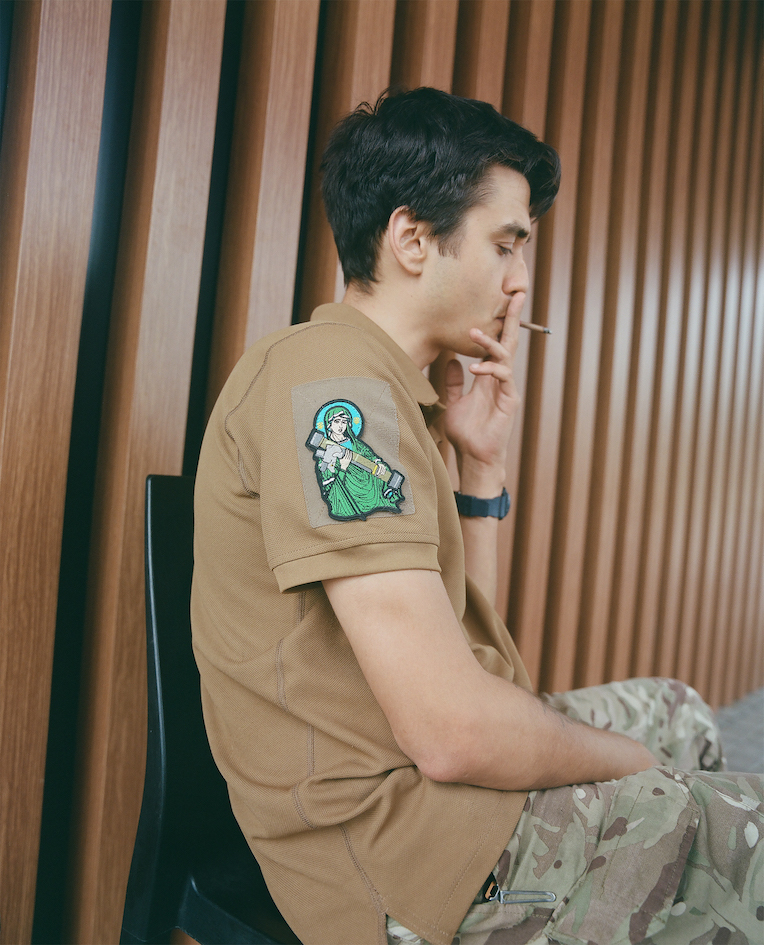 Tymur A., a 26 y.o. tech project manager who volunteered to join the Armed Forces of Ukraine as a platoon commander. He is pictured at a gas station in Vinnytsia, Ukraine, wearing a Saint Javelin patch. 2022 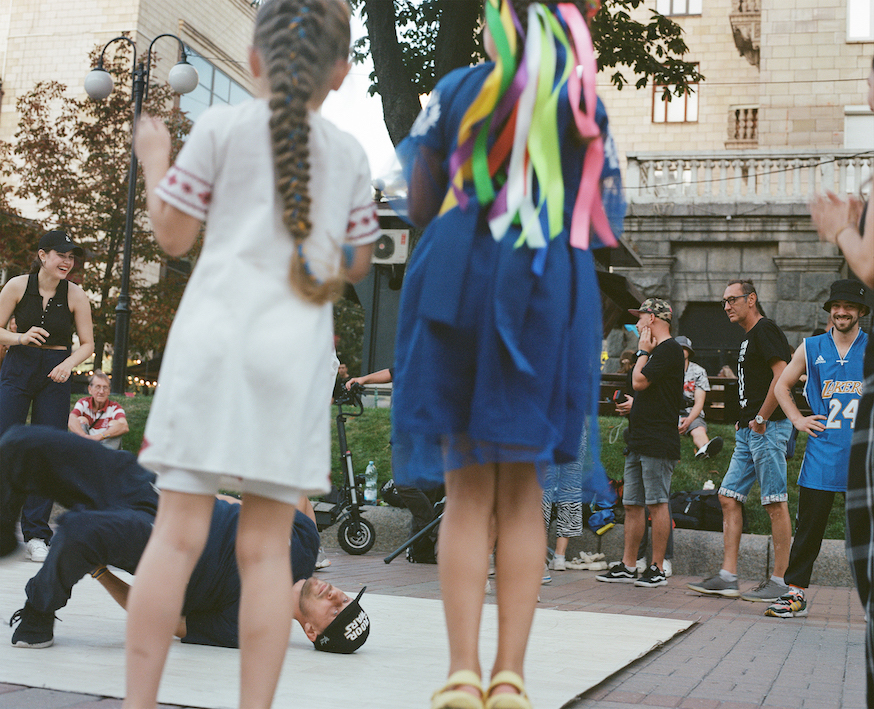 Street dancers on the Independence day celebration on the capital’s main Khreshchatyk street. The performance has been stopped because of the air raid alert. Kyiv, Ukraine, 2022 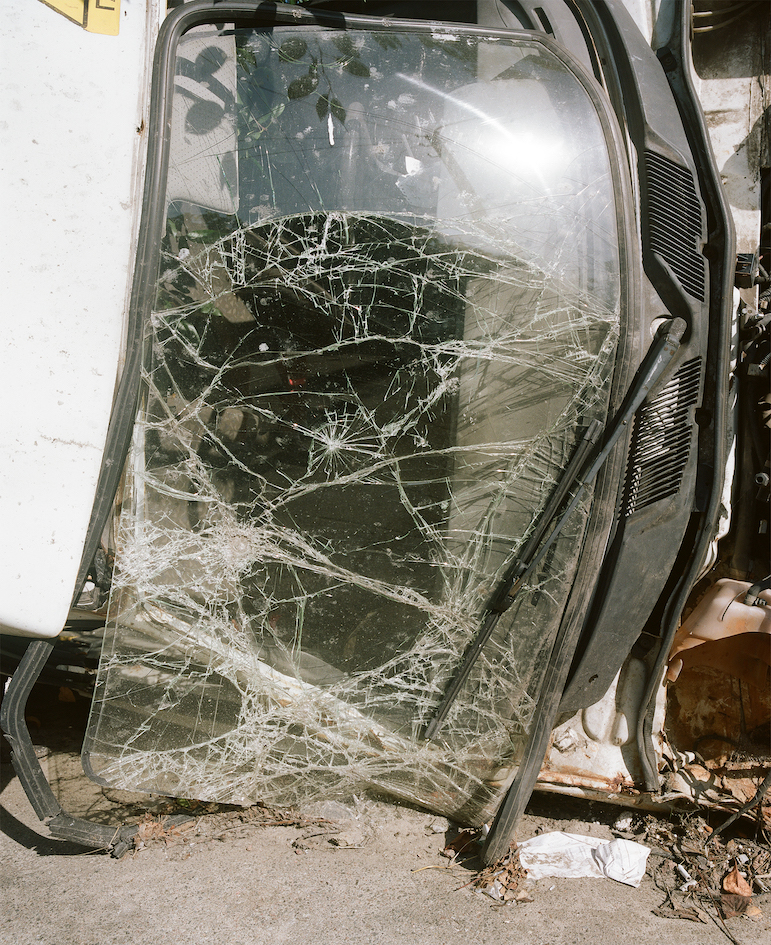 A car overturned as a result of Russian fighting on the streets of Irpin, Ukraine. 2022 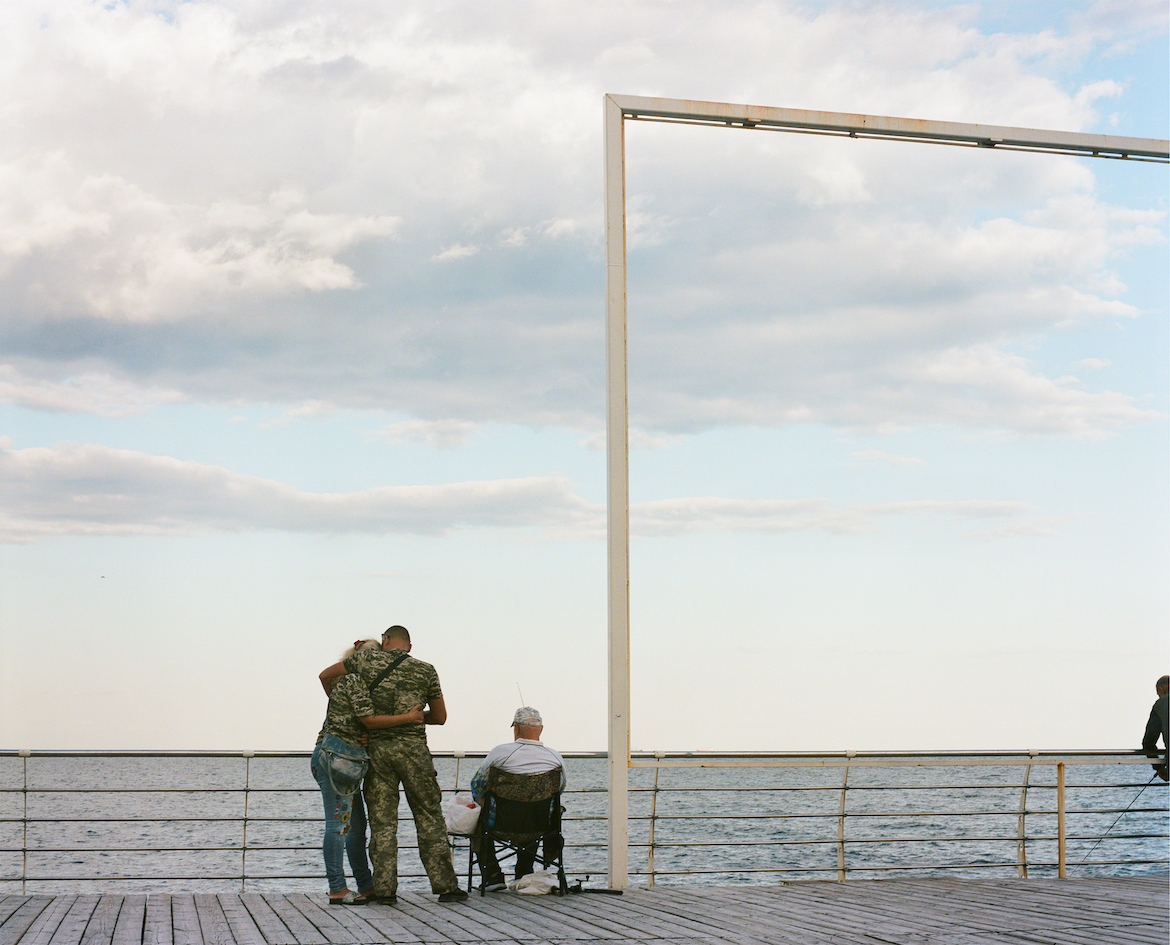 Time of Phoenix is on view at Wembley Park until November 15, 2022.

Linkedin
OTHER ARTICLES
Ireland’s national sports are modernising. At the forefront of this movement is Na Gaeil Aeracha, the country’s first ever queer GAA club.
Hackney Bumps is a DIY sanctuary in the heart of East London, home to a thriving diverse community of skateboarders – and beyond.
As the cost of living crisis bites, letting go of treats to keep us going is proving difficult – but we should’t just blame ourselves for our financial worries.
We sat down with trans comic Jordan Gray to discuss the power of portraying complex characters, giving humanity the benefit of the doubt and getting naked on live TV.
Recent research is highlighting the drug’s enormous potential for treating substance abuse.
Photographer Nico Froehlich’s series documents South London’s diverse communities, while also reflecting on their fragility amid rapid gentrification.