Art & Culture / A rare glimpse at life among the Bruderhof community 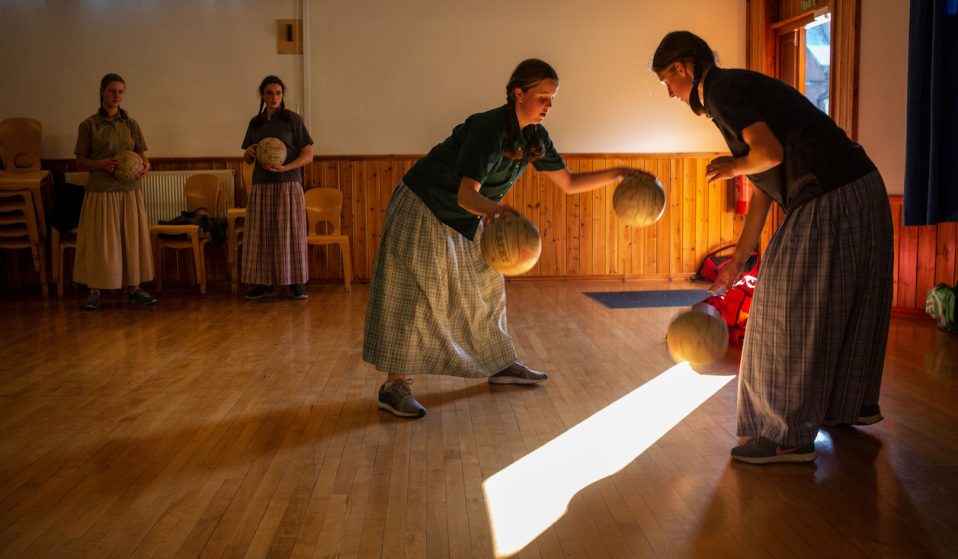 Danny Burrows discusses his new series of images documenting an pacifist anabaptist community who lead an alternative way of life.

Danny Burrows discusses his new series of images documenting an pacifist anabaptist community who largely shun the outside world to lead an alternative way of life.

British photographer Danny Burrows and former Editor-in-Chief of Onboard magazine first encountered the Bruderhof community in Calais in 2015. As well as documenting the refugee crisis in Northern France, he’d teamed up with a friend – Alexis De Tarade of Method Mag – to set up a grassroots NGO (Riders For Refugees) that redistributed second-hand mountain wear to refugees in the camps, and it was during one of their deliveries that he came across some teenage volunteers that immediately stood out: the boys in mid-western style jeans and T-shirts and the girls in ankle-length dresses and headdresses. They also had distinctive American accents. “Not something that you would expect to see or hear in the mess that was Calais at the time,” noted Danny.

When he learned that they were from the Bruderhof community, his intrigue sparked a deep dive into their origins and way of life. Established in 1920 in post-war Germany as a pacifist Anabaptist community, the Bruderhof – meaning “place of the brothers” – eschew personal possessions and technology and practices a unique community of goods and wealth.

Collectively, there are around 3,000 Bruderhof living in cloistered communes worldwide, where they practice sustainable farming and fund their lifestyle through lucrative businesses manufacturing toys and furniture. “I am not religious but the pacifism and community living was a really interesting paradox to the world I was experiencing at the time,” says Danny. 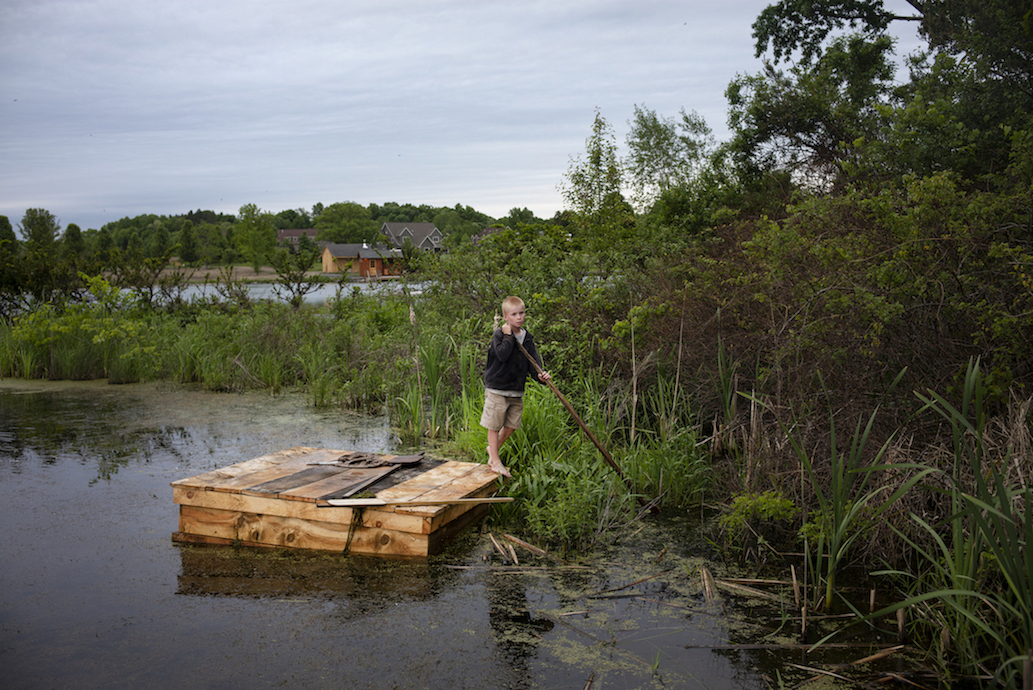 After reaching out to the community, Danny became the first outsider photographer to be granted access and spent two years recording their alternative way of life in Australia, Germany, the USA and the UK. While he was mostly welcomed, Danny also experienced scepticism from some individuals, who believe they have been poorly represented in the past.

“The first thing I am asked whenever I speak about the Bruderhof is, are they a cult? This word has such negative connotations and they certainly don’t apply to the Bruderhof,” he says. “Yes, they live in closed communities, but then this is how they are able to exist without personal possessions or wealth and it also means that they can shield themselves against the influence of the digital age.”

“That might sound odd, but when I was in the community it dawned on me how freeing it was to exist without the constant beckoning of a device in your pocket … I was also taken by how the Bruderhof were actually practising what they preached … and committing themselves to caring for all in their community, as well as those in need beyond the walls of the communities.” 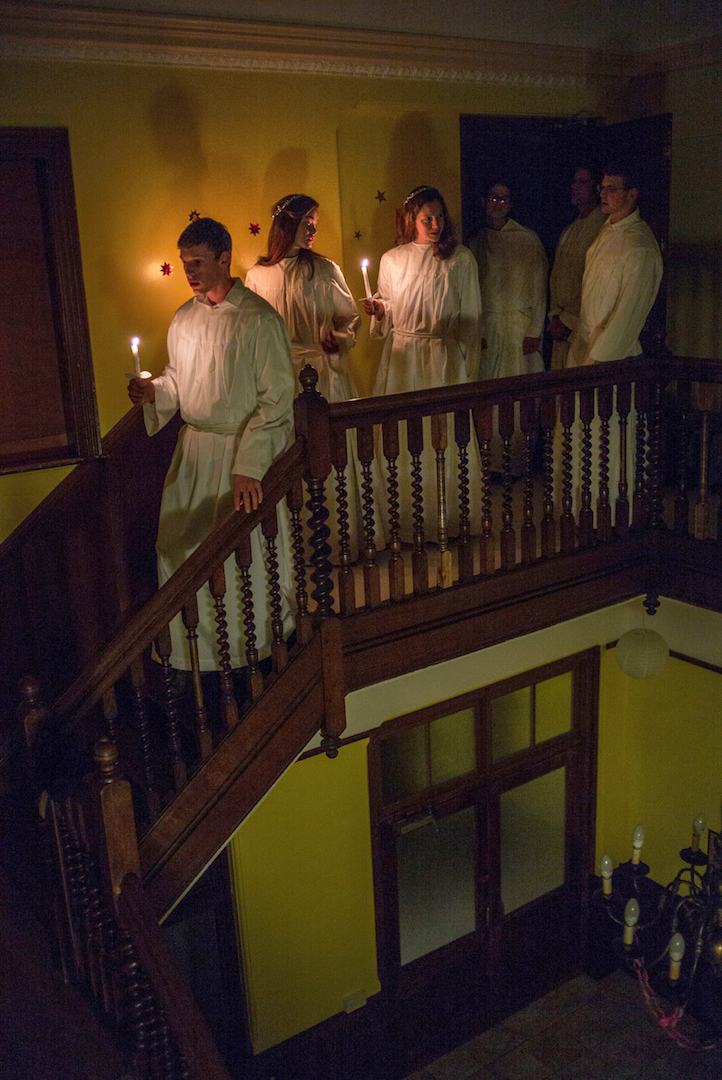 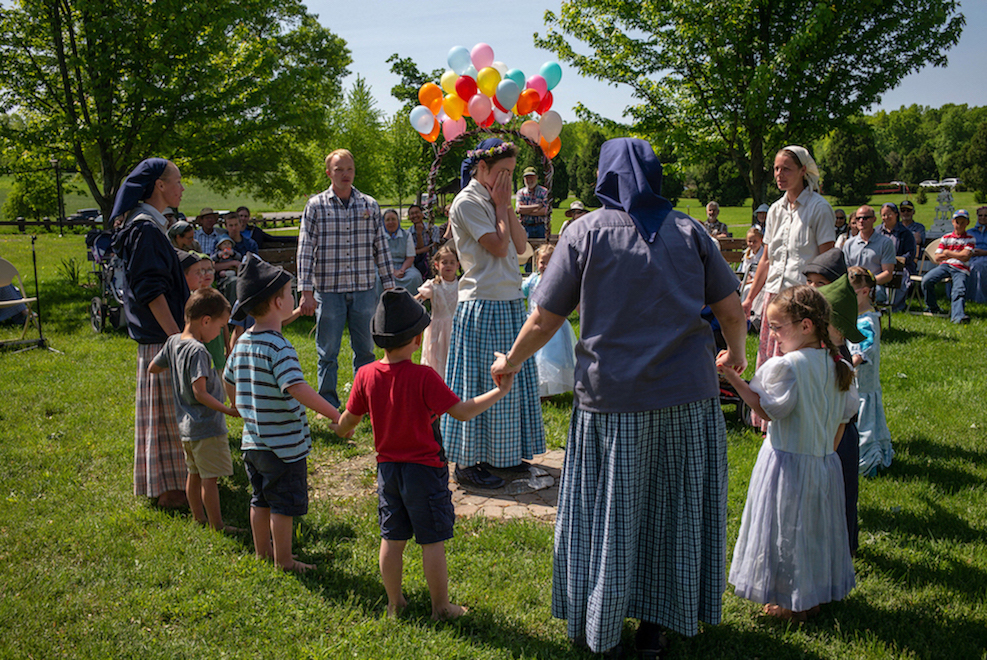 Children play games with the bride and groom at the ‘wedding tea’.

Despite disagreeing with many aspects of their conservative Christian doctrine – such as their anti-abortion stance and their opinions on the sexual preferences of others – Danny was still able to form lasting bonds with members of the community, staying with families and chatting into the late hours.

“As a documentary photographer I don’t think it is one’s place to question; you are there to record and convey the stories you see in your own visual language or an image language that is representative of your subjects,” he says. “It is a process of trust and collaboration.”

Danny is currently fundraising to publish a resulting book, TOGETHER (A)PART, which will offer a rare and intimate insight into the Bruderhof. Immersing himself in their daily lives, he was able to capture the essence of community spirit through its quieter moments, whether it’s a mother and her two daughters at a baptism spring, a high school basketball team embraced in a pre-game prayer or a teacher reading to kindergarten kids at a forest school in upstate New York.

“The individual is secondary to the wellbeing of all,” explains Danny. “It is a pretty selfless existence which I think a lot of us would find hard. Of course there is also plenty of time for family, sports and fun but this is levered in between the work. Think of a bee hive with Christianity as its structural bond and I guess you have it.” 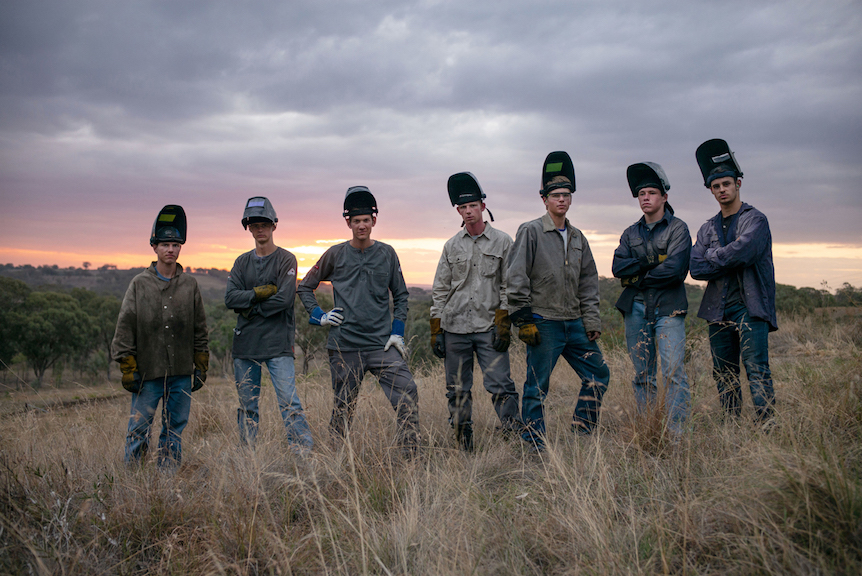 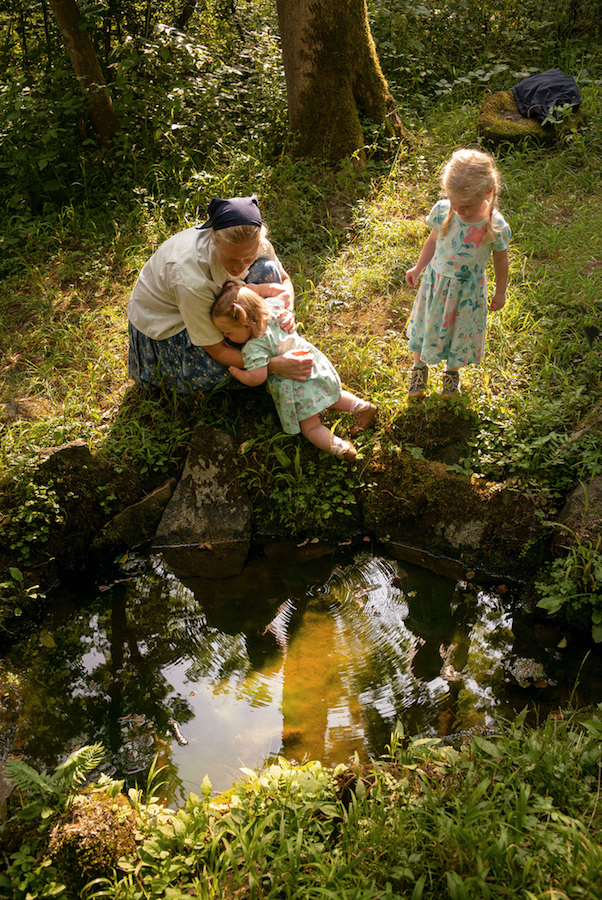 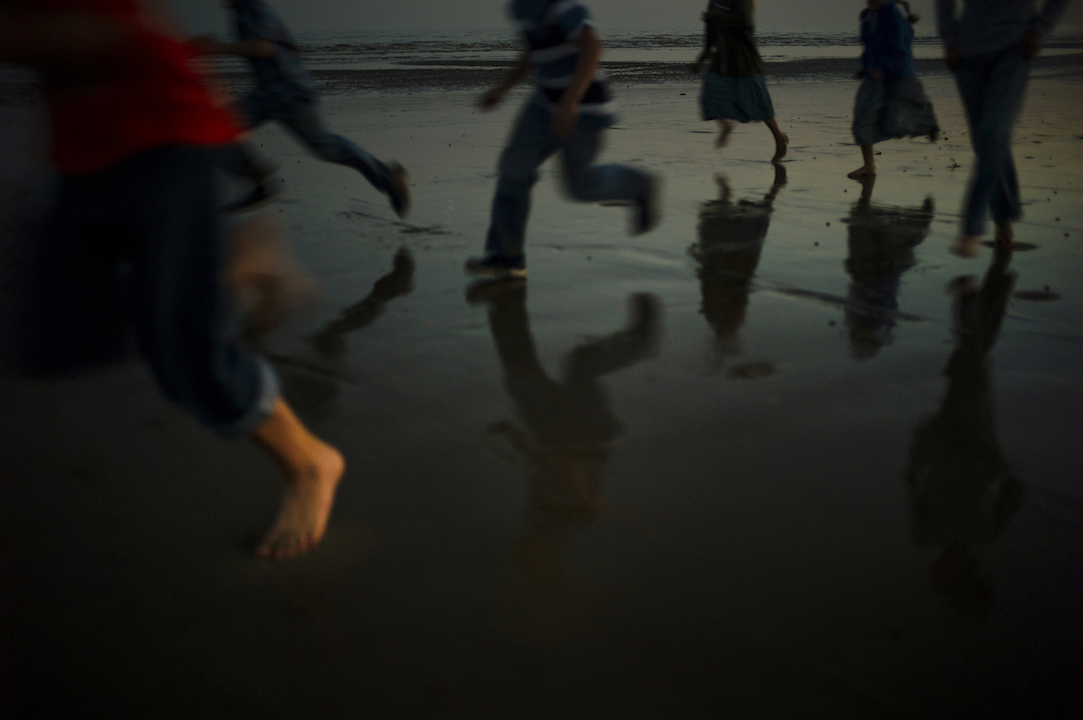 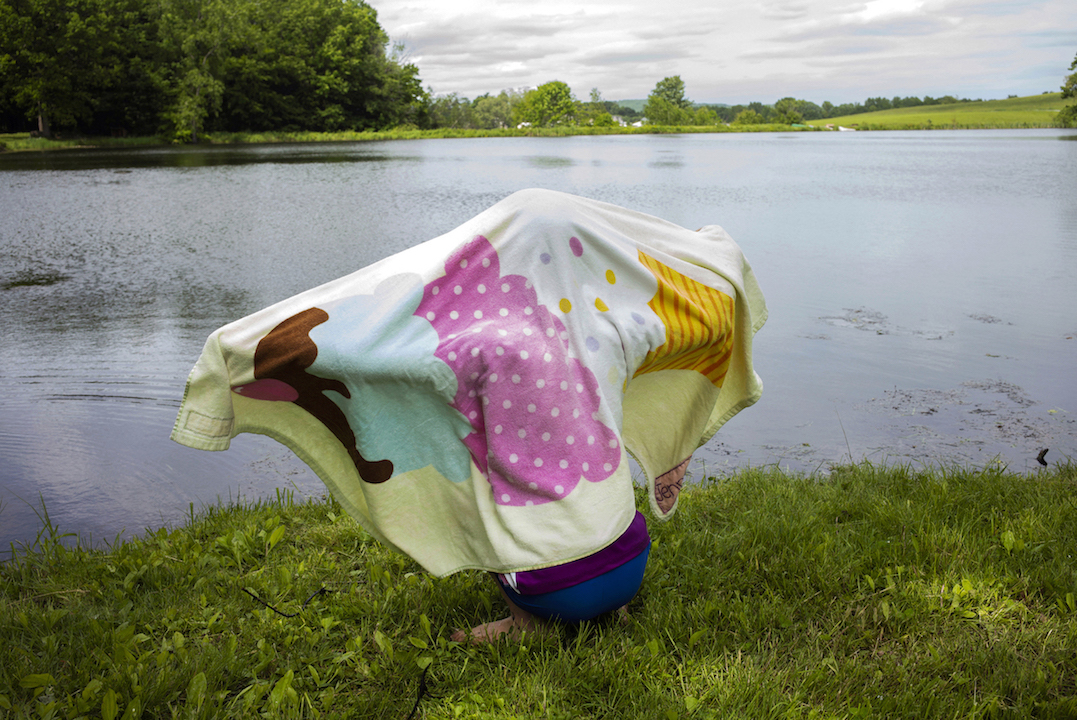 Jenny shelters from a shower under her towel, by the lake in the Foxhill community, Upstate NY 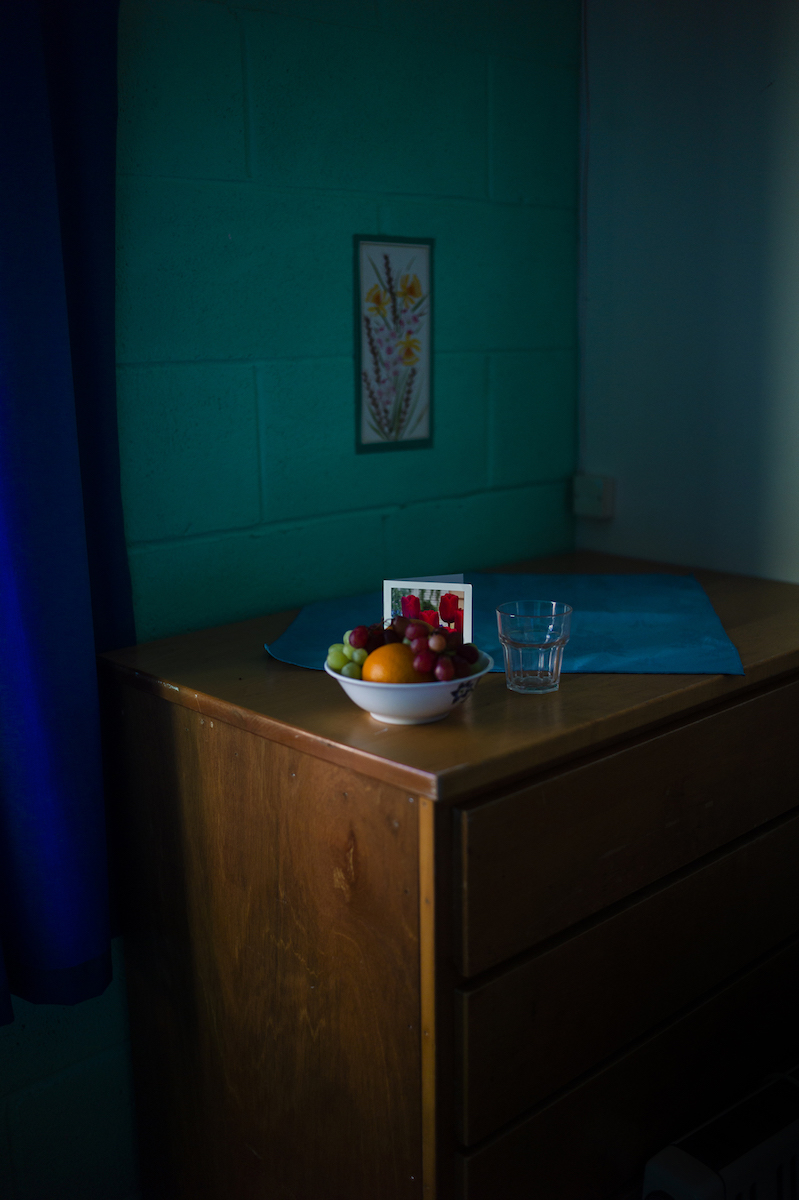 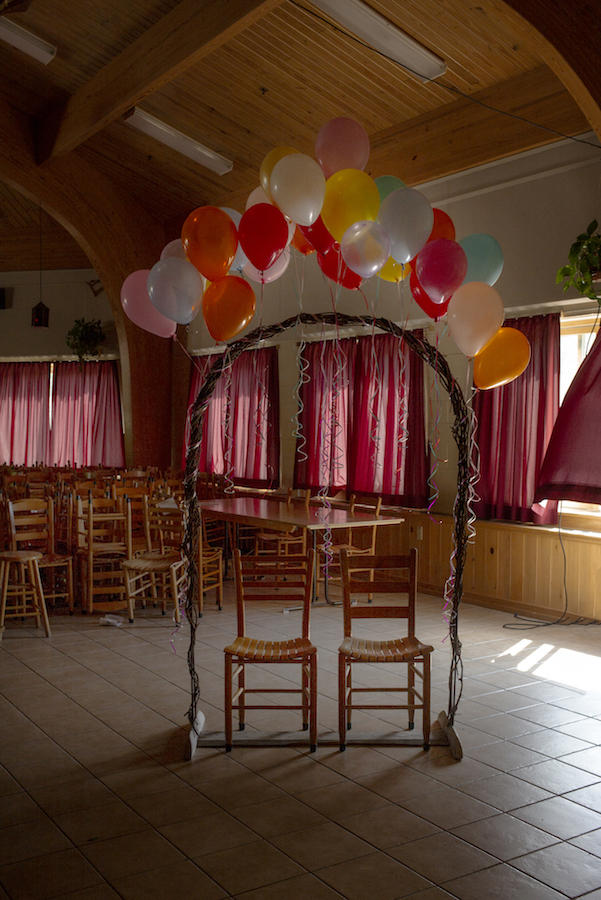 Support the Crowdfunder for TOGETHER (A)PART here. To see more of Danny Burrow’s work, visit his official website.

Linkedin
RELATED ARTICLES
OTHER ARTICLES
The idea that a younger generation is abandoning work has become a popular narrative online, but it doesn’t necessarily reflect reality.
A new project is documenting formerly incarcerated people as they transition back into civilian life.
Rogue landlords are exploiting young and inexperienced renters and leaving them in mental and financial turmoil, reports Niall Hignett.
For over a decade, gamblers have won big by employing people to place live bets from the court. But does this dubious method still work?
As the Scottish government announces a rent freeze, an activist with Living Rent who fought and won shares how they did it, and what must come next.
Financial turmoil is pushing people who work in the sex industry into more dangerous and desperate situations as a means of survival.