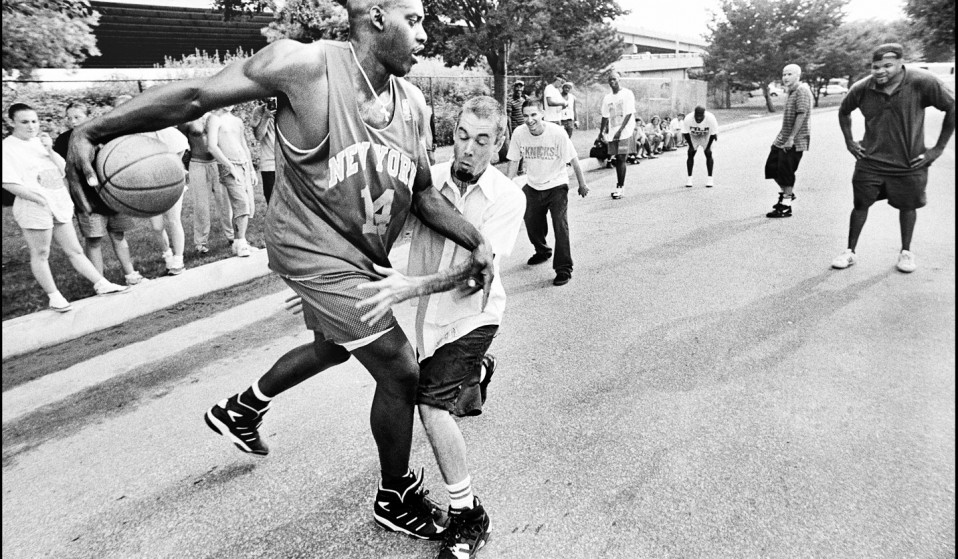 When the Beastie Boys brought their own basketball court to Lollapalooza ’94, writer Tim Donnelly found himself earning some on-court respect. To commemorate MCA's passing, this is a heartfelt hoops tribute.

When the Beastie Boys brought their own pop-up basketball court to Lollapalooza ’94, writer Tim Donnelly found himself earning some on-court respect from hip hop's most famous trio. To commemorate MCA's passing, four years ago today, this is a heartfelt hoops tribute.

In the summer of 1994, I was assigned a job that no man had ever done before: to be the first online travelling reporter for MTV.com. My assignment was to go on the Lollapalooza tour, take photographs on the first Apple digital camera, write daily tour journals and interview the musicians.

Sounds easy? Not in 1994, when dial-up ruled the world. Lollapalooza ’94 was supposed to be the year of Nirvana, their victory lap, but we all know what happened that spring.

Instead, a formidable line-up of Smashing Pumpkins, Beastie Boys, The Breeders, A Tribe Called Quest, Nick Cave and The Bad Seeds, L7, George Clinton and P-Funk and a snotty, young trio of punks called Green Day left an indelible tribal tattoo on cities all over the United States and Canada from July 5th through Labour Day Weekend.

Despite the daily displays of musicianship from every act, Lollapalooza ’94 was owned by the Beastie Boys, who were now men. Nearing thirty years of age, they were accomplished musicians, no longer the bratty rappers who, when they first formed, took glory in being a ‘bad band’.

Forty-ounce malt liquor and whippets were replaced by juicing and meditation. They owned and apologised for their immature and misogynistic behaviour during their ‘Fight For Your Right (To Party)’ days. The nightmare of parents everywhere had evolved into renaissance men.

Their artistic, activist and spiritual pursuits were complemented by their passion for sport, namely the game of their NYC ancestral home, basketball, as well as skateboarding and snowboarding.

The Lollapalooza schedule was brutal, but the Boys had a positive and healthy way of dealing with the grind: playing hoops.

A portable basketball hoop was stowed underneath their tour bus, helping the B-Boys bring the West Fourth Street playground to the backstage of amphitheaters and parks in places like the majestic Gorge in Washington State and underneath the 1-95 in South Philadelphia.

As a former high-school player from the Jersey Shore, I loved street ball and was desperate to play in these three-on-three games, even if it was to work off the tour bus shenanigans from the night before.

After inquiring daily, I was told to “be behind the buses at noon”. It was the three Beasties against their videographer Evan Bernard, DJ Hurricane and me.

After endearing myself to my teammates by setting the table for them, and then getting blocked by Adam Horowitz’s (Ad-Rock) stifling defense, I got pissed and decided to turn it up.

I hit three in a row from deep, set up Bernard down low and we won in an intense 15-13 game. After the game, Adam Yauch (MCA) came up to me and said, “Come play anytime you want, man. That was a good run.”

The Lollapalooza powers-that-be would cringe every time the hoop was set up. Here’s the band 20,000 people have come to see and they are playing basketball – not just ‘shooting hoops’, but going all out, all the time. What if one of them got injured? They nearly had a collective coronary when 6”6’ Billy Corgan – frontman for the Smashing Pumpkins, the headlining band – decided to play.

And he didn’t just play; he dunked. Yep, in polyester pants and Doc Martens. And to make it worse, he dunked on me and my teammate for the day, MCA. Not too many people in this world can say they got dunked on by Billy Corgan. But Adam and I could.

I ran game with them every chance I got, enduring the heckling from the ‘fourth’ Beastie Boy, photographer and documentarian Ricky Powell.

During a rather scrappy game in Milwaukee, I was on fire; don’t ask me how, because I spent the previous night sampling Milwaukee’s best.

“You gonna let some hungover, small Irish guy from Jersey do that to you?” Powell yelled to MCA, who was now guarding me.

With that, MCA backed me down like Ewing, wrapped his razor-sharp elbows around my hips, dug in, turned and took me to the hole, possession after possession, until they beat us into submission.

“Come up and watch us from the stage today man. Come up with us,” said MCA, his long arm on my shoulder.

As a writer, being privy to their pre-show rituals and hearing the roar of the crowd as I walked up with them, was incredible access. As a fan of their music, it was stupendous. And as an ‘official’ posse member for the day and the rest of the tour, it was unforgettable.

Our basketball opus across America culminated at the tour stop at FDR Park in Philadelphia with a visit from Beastie Boy favourite Anthony Mason of the NY Knicks for a feature for the now defunct Slam! Magazine.

Fresh off their stunning loss in the NBA Finals to the Rockets (weeks later in Houston, Evan Bernard would save me from being chased by drunk, sunburned Texans for wearing my John Starks jersey) Mason and two buddies took on the Beastie Boys underneath the 1-95 overpass in South Philly.

It was a comical affair, the hulking Mason being guarded by the rail-thin Beastie Boys. But, the game wasn’t a skit in a music video (though footage of this and other pick-up games did make it in the video for ‘Root Down’), the Beasties were heated competitors and refused to give up even though they were outmatched by a foot and a ton.

Mason toyed with them, Meadowlark Lemon-style, holding the ball over his head outstretched from the prying hands of the Beastie Boys. Yauch was getting frustrated so he tried to back Mason down, like he did to me countless time from Denver to Boston.

This time I was sitting on a curb, wondering if his magical “chicken wing” move would work on Mason. Nope. Mason swatted the ball away, out of bounds, like twenty yards out of bounds.

The Boys and everyone around, including Adam Yauch, hit the ground in laughter. From then on, getting your shot blocked was to be “Mased”.

At this stage of his life, Adam Yauch had devoted his life to Buddhism; he brought Tibetan monks on the tour with him, who in turn blessed the Lollapalooza stage before each show.

This was not some self-indulgent rock star move by Yauch. It was a real and ingenious way to introduce the plight of these humble, religious and persecuted men to the youth of America.

Adam would meditate and pray with them, play soccer with them, throw a Frisbee, kick the hacky sack, eat with them and be their guide into a world that was completely upside down to them.

After weeks of nodding and smiling to the monks, I joined them and Adam for a potential ankle-busting barefooted soccer match in Charlotte.

We ran, laughed and played our own style of kick-and-chase with the highly skilled and impeccably trained monks. Looking back on it, I can only recall the laughter and the smiles, the non-verbal happiness between all participants.

I didn’t see much of MCA personally after their legendary performance and after party at the 1994 Video Music Awards. I ran into him on at his Tibetan Freedom Concerts and supported his New Yorkers against Violence show directly after 9/11. Then I literally bumped into him in Soho one afternoon.

We spoke of his upcoming snowboarding trip to British Columbia and my recent surf trip to Puerto Rico. He invited me to run ball with him at a downtown school.

Of course I got the day wrong when I showed up weeks later. We re-connected via email for an election feature I did for Huck in 2008 and looked forward to seeing him soon.

I knew he got sick and had battled the cancer hard. I became concerned when he wasn’t at the induction ceremony for the Beastie Boys at the Rock ‘n’ Roll Hall of Fame. Then I saw a mutual friend in New Orleans who confirmed my fear. Four days later, Adam Yauch left us.

As I watched the Knicks play the Heat one Sunday afternoon from my couch, heard the Beastie Boys being played over the PA and saw his picture on the big screen at MSG (a picture, that incidentally, was shot for Huck in 2008 when Adam was doing the rounds with his basketball documentary, Gunnin’ For That #1 Spot), I knew that the 15-0 run the Knicks went on to turn the game around was heaven sent.

To me it wasn’t Mike Bibby who nailed that big three; it was Adam Yauch, with that whack-ass but highly effective jumper of his.

How else could you explain a thirteen-game post-season losing streak coming to an end in a game where they had no chance?

This story originally appeared in Huck 33 – The Identity Issue. Get it now from the Huck Shop or subscribe to make sure you don’t miss another issue.

Linkedin
RELATED ARTICLES
OTHER ARTICLES
The government’s failure to take long Covid seriously has led to the formation of a group campaigning for the thousands of forgotten victims of the illness.
The revered showbiz chronicler recalls his journalistic beginnings, documenting subcultural scraps in the ’80s.
Over the weekend, London locals came together to resist a pre-planned police raid targeting delivery drivers.
The author discusses her blistering new novel about history, revolution and queer love.
A group of Ukrainians living in Poland are helping Ukraine withstand Russia’s brutal invasion by buying supplies and shipping them directly to the war’s frontlines.
In the latest OFFF Dispatch, the enigmatic designer dives into his process, connecting the dots between his unique and varied creative output.