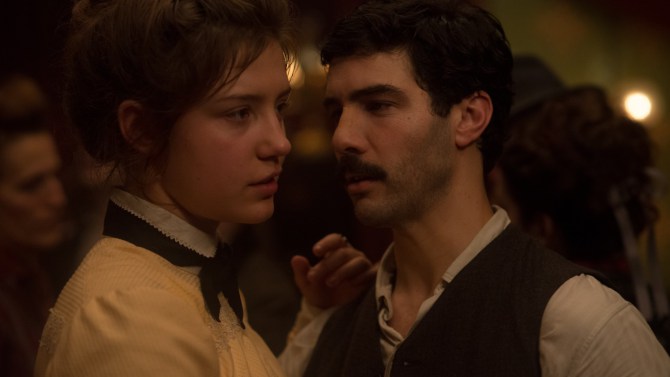 Palme d'Or winning French actress, Adèle Exarchopoulos, is back on the big screen with an anarchist drama set in 19th century France.

Palme d'Or winning French actress, Adèle Exarchopoulos, is back on the big screen with an anarchist drama set in 19th century France.

Last time that 21-year-old actress, Adèle Exarchopoulos, was in Cannes she made the record for being the youngest artist to win the Palme d’Or. It was 2013 and her film was the passionate and painfully comprehensive lesbian love story, Blue is the Warmest Colour. Along with director, Abdellatif Kechiche, and co-star, Lea Seydoux, she deservedly walked away with the top prize.

Now she is back with Les Anarchistes by second-time feature director, Elie Wajeman. Tahar Rahim stars as a police constable who goes undercover among a group of anarchists in 19th century France. After winning the trust of a man named Biscuit down at the nailworks, he is moved into a shared house where, what-do-you know, a beautiful potential love interest dwells. Enter Adèle.

It’s galling to see an actress with form in inhabiting the screen in a way that is (to quote Blade Runner) “more human than human” compressed into a role where her main function is to abet the arc of a male character. Her ‘Judith’ has one scene in which she shows creative autonomy. She reads a speech to a pub full of angry men in flat caps and braces before this facet of her character is superseded by the demands of having secretive sex. Exarchopoulos drums up serious chemistry with Rahim and in doing so makes the most of her unrewarding part.

Linkedin
OTHER ARTICLES
The government’s brutal crackdown on NGOs has left victims of rape without anywhere to seek help. And now, as the country plays a key role is Russia’s war, things are only getting worse.
As the Criminal Bar Association enters its fifth week of action, criminal barrister Russel Fraser explains why the legal professionals have walked out and how action is likely to escalate.
RaD was inclusive, underground and unapologetically British. Almost three decades after it ceased publication, the people behind its success remember its influence.
With the Women’s Euros in full swing, last week saw glorious, sweaty celebrations take place in a dedicated, safe space for female and non-binary fans.
The author discusses her new memoir, which offers a sobering reflection on the racism and otherness she’s experienced along with a joyful celebration of her culinary heritage.
Photojournalist Fiora Garenzi spoke with people still living in Eastern Ukraine, an area which seen some of the heaviest fighting since the war began.