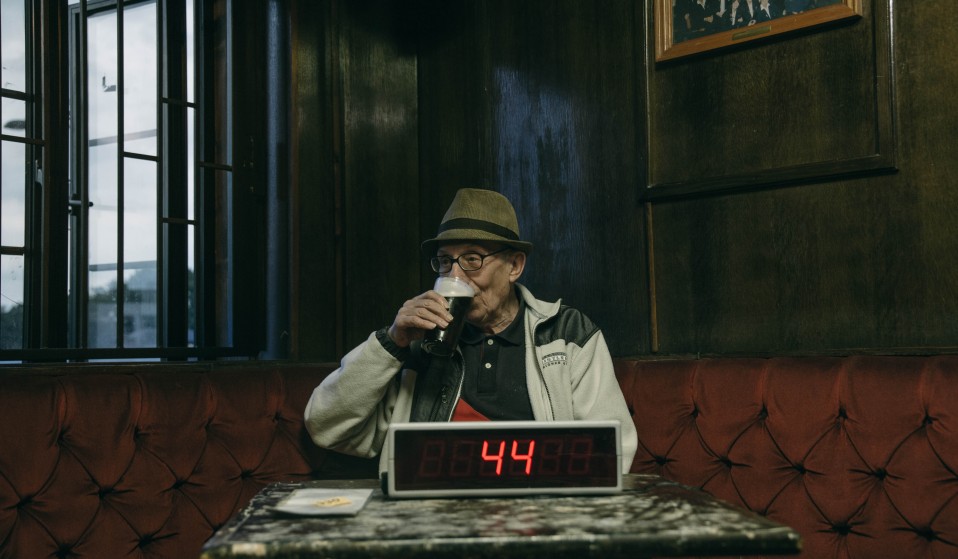 London’s declining traditional venues are surviving by providing a home for threatened alternative nightlife, from live music to LGBTQ parties.

London’s declining traditional venues are surviving by providing a home for threatened alternative nightlife, from live music to LGBTQ parties.

“Up your bum, twenty-one,” calls Bob, the 75-year-old bingo caller.

“Up yours,” the players respond, with varying degrees of energy.

We’re upstairs at M.O.T.H., an ex-serviceman’s club in central Hackney, East London. Nine of the club’s members, in their sixties, seventies and eighties, are seated at tables spread around the wood-panelled room, decorated with fading group photographs of members from decades past and a domineering painting of Winston Churchill. Sitting in the corner, the older M.O.T.H.s are joined by Amelie, Margot and Ali, all in their late 20s and from Paris, who are new additions since the club was forced to open its doors to non-members a year ago to stave off closure. 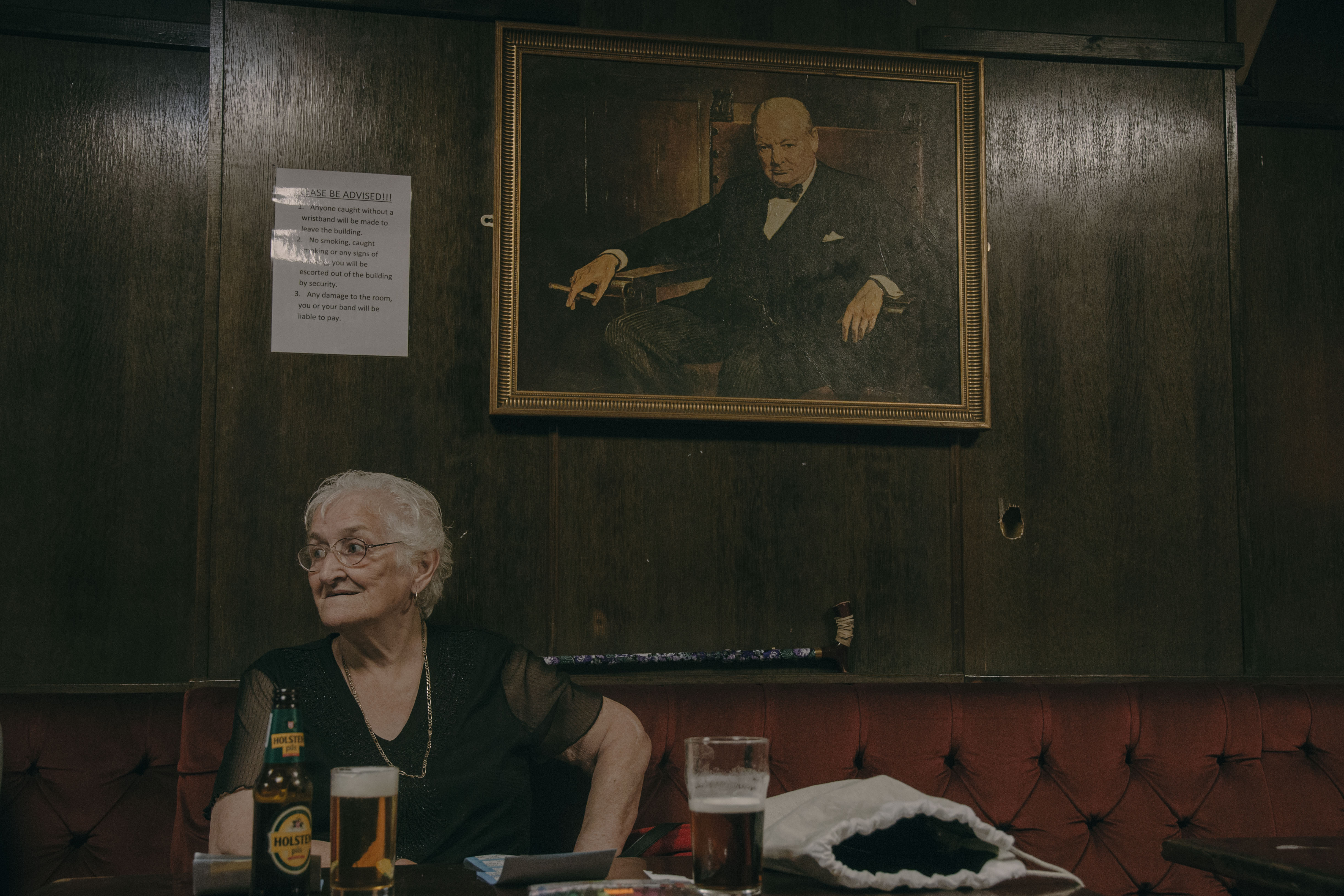 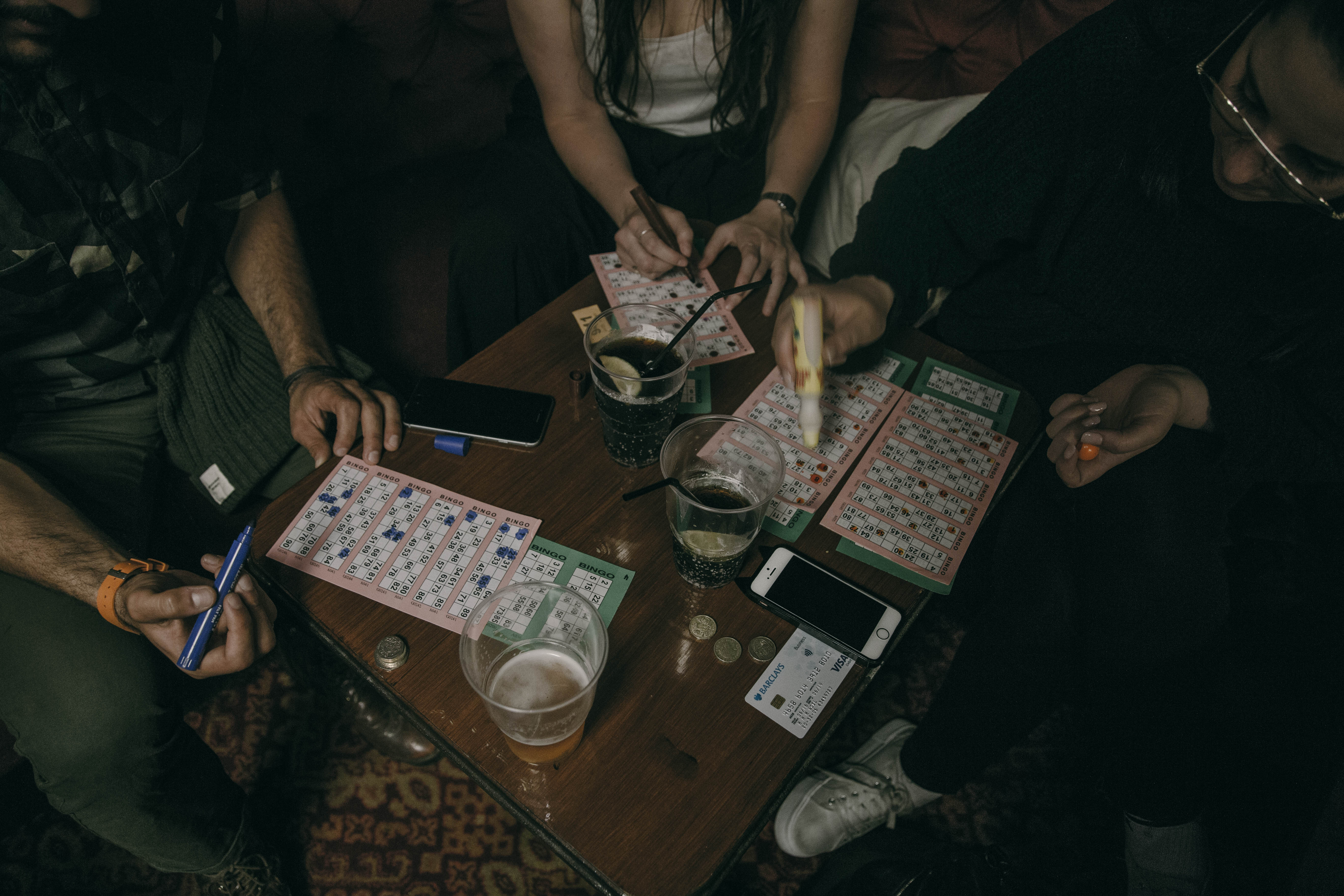 Across the country, thousands of pubs, nightclubs, music venues and traditional working class social clubs have closed their doors in recent years. Live music, working class culture and alternative nightlife is in decline for a host of reasons, including strict licensing laws, a changing population, rising property prices and gentrification.

Bethnal Green Working Men’s Club pioneered sharing their space with a younger, alternative crowd to survive over a decade ago and newer openings like M.O.T.H. have followed a similar model. In a city so often divided by class, race and age, they’re providing rare opportunities for generations to come together and supporting fringe events and communities that would also struggle to survive on their own, like live music, comedy, alternative cabaret and gay and drag nights.

Based in a fortress-like red brick building the General Browning shellhole, the Hackney chapter of the Memorable Order of Tin Hats (M.O.T.H.), was opened in 1972 for ex-service-people and their families. The medals, paintings of generals and military regalia that decorate its walls hark back to a bygone era when Britain ruled the waves and threw its weight around in colonies across the globe. 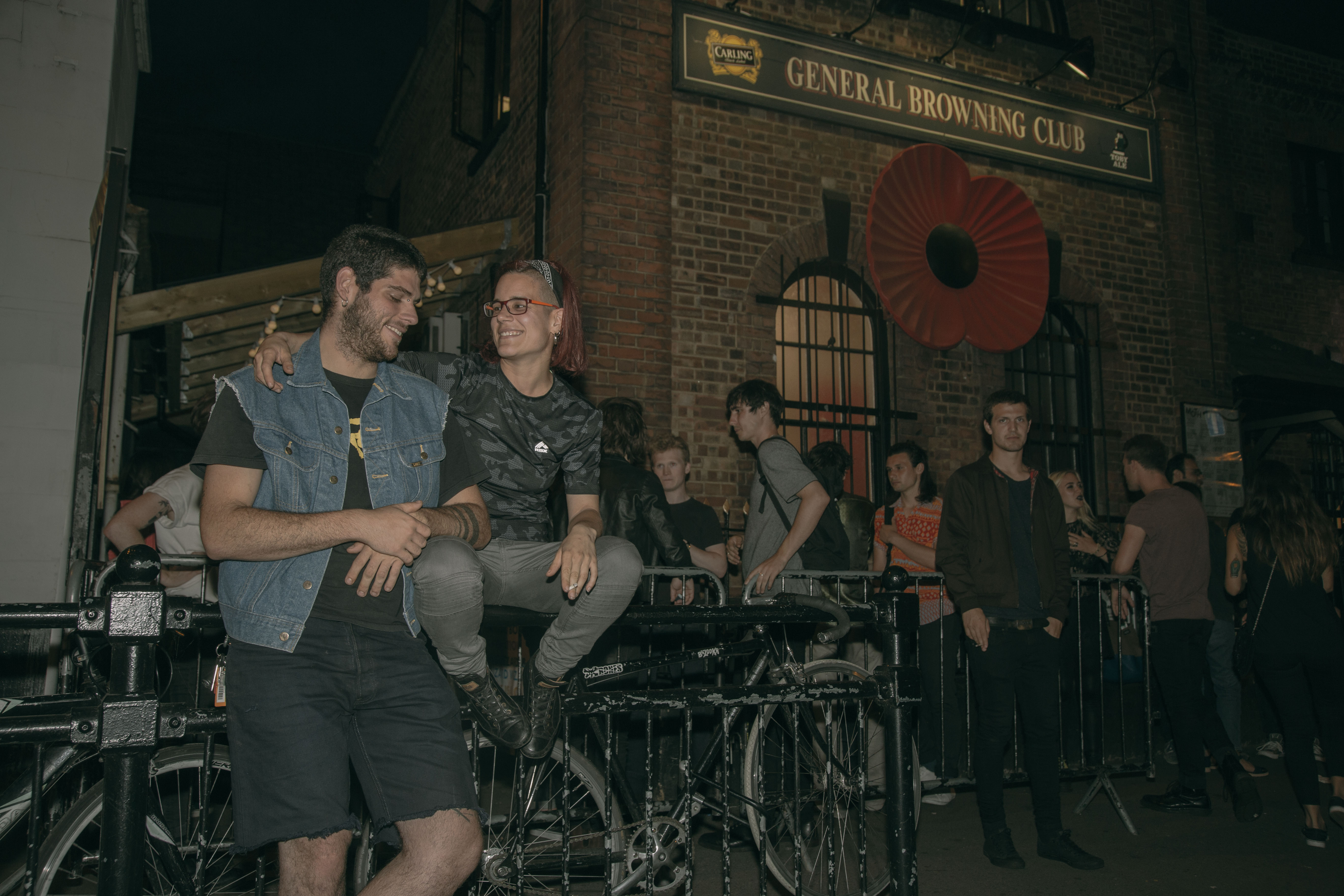 Faced with a dwindling membership and hefty repair bills, the bulk of the once-packed venue was sold to live music promoters who put on gigs, quizzes and film nights, while promising to preserve the M.O.T.H. club events and the venue’s unique interior. Today, there’s bingo upstairs for the members, and Long Beach rock trio, the Tijuana Panthers, playing downstairs.

So, why did Amelie and her friends head down?

“I love the atmosphere, it’s really fantastic,” adds Ali. “There are so many people you wouldn’t usually hang out with. We don’t really have this in France.”

“They laugh at us a lot because we’re French,” Margot says, “and we laugh at them because they have very specific bingo jokes that we don’t get.”

“But we’re learning,” Ali adds with a smile, before the next round begins and everyone becomes locked into concentration again. 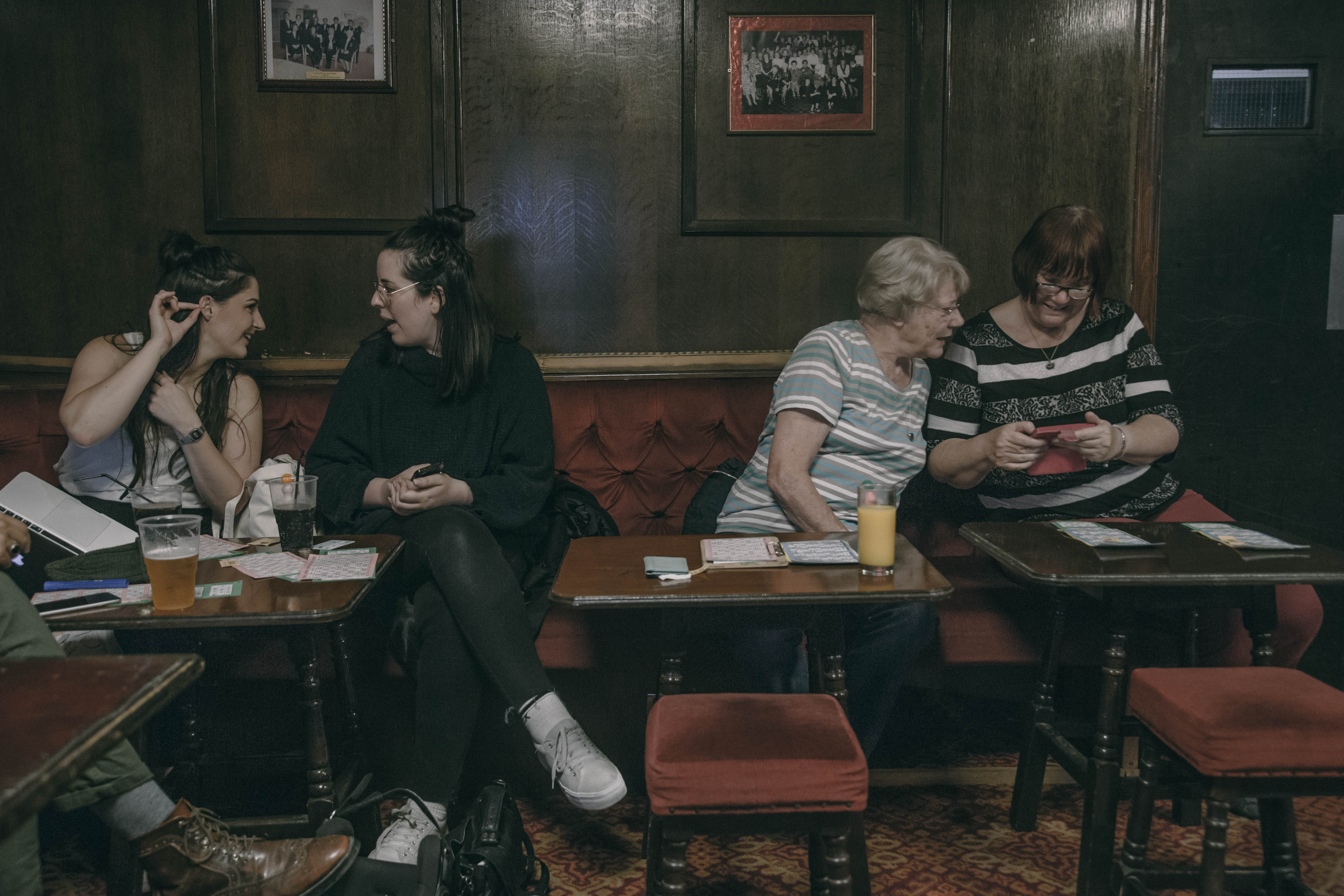 Downstairs in the bar, John, 75, and Sadie, 79, are sipping glasses of beer. They share fond memories of the club in its heyday, when there would be queues around the block for the Saturday night dances and singalongs that were the club’s staples, until numbers started to dwindle in the late ’90s.

“I used to love listening to the stories the older M.O.T.H.s who’d served in the war used to tell,” Sadie remembers. “It was a place to see all your mates, coming here was just what everybody did.”

“I’ve been coming here almost as long as I can remember and I have a lot of fond memories,” John says. “The M.O.T.H.s kept it going for a long time but I’ve thought it would die the death for years now.” 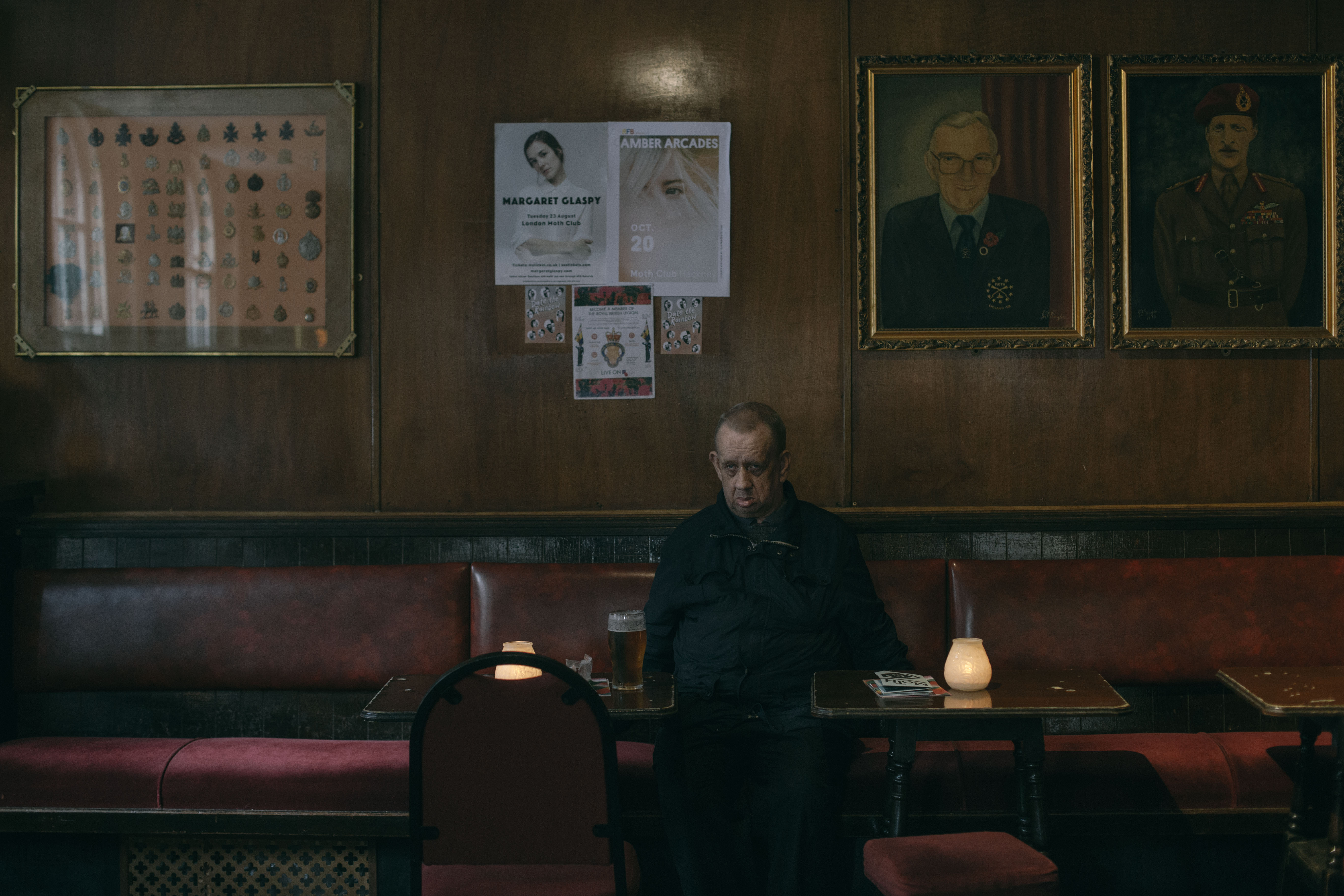 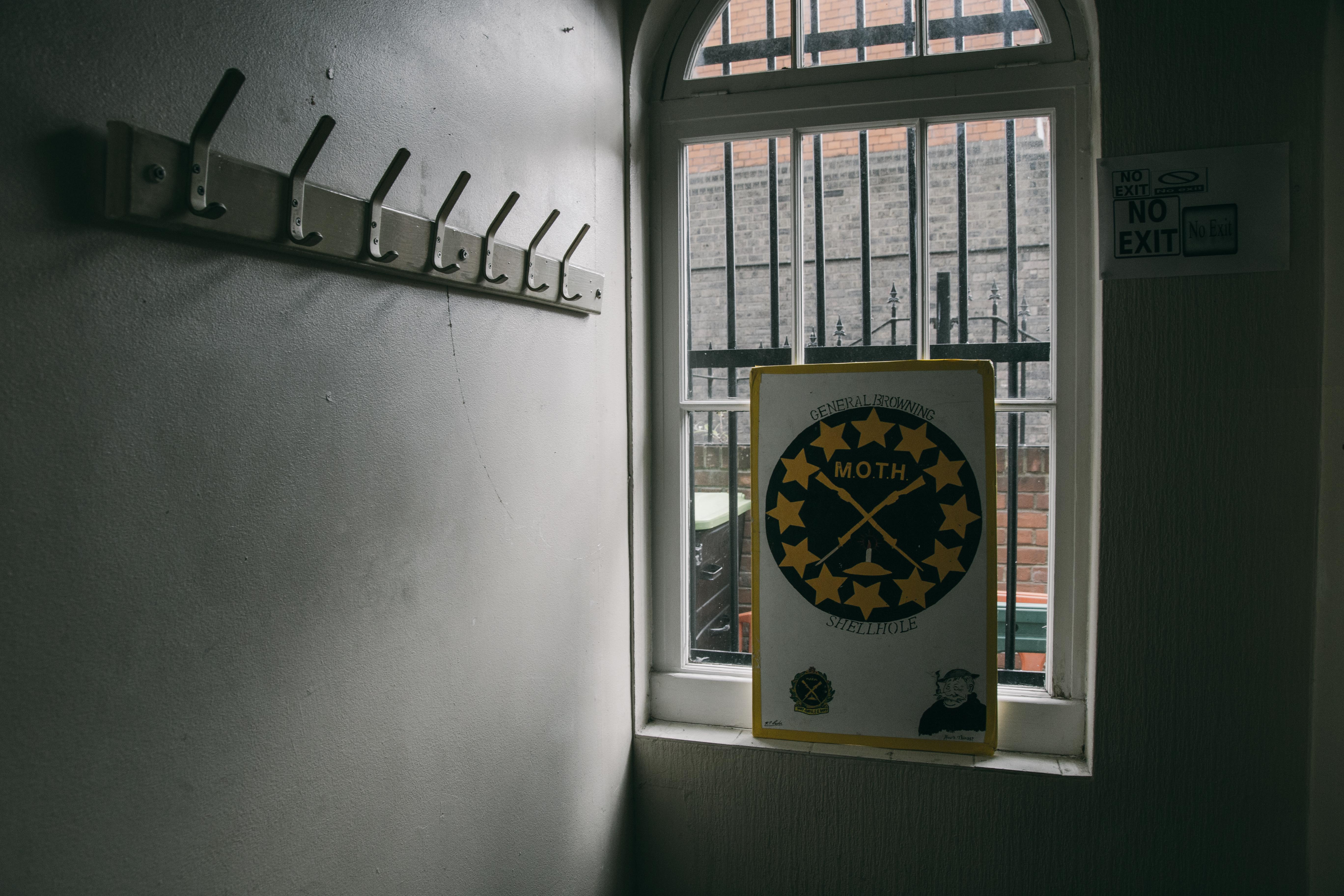 So, how do they feel about sharing the club with the new crowd? Does it still feel like home?

“The youngsters love it and that’s what it’s all about – they keep the place open,” John explains. “I’ve always felt comfortable coming here but that’s not true of everywhere in East London.” 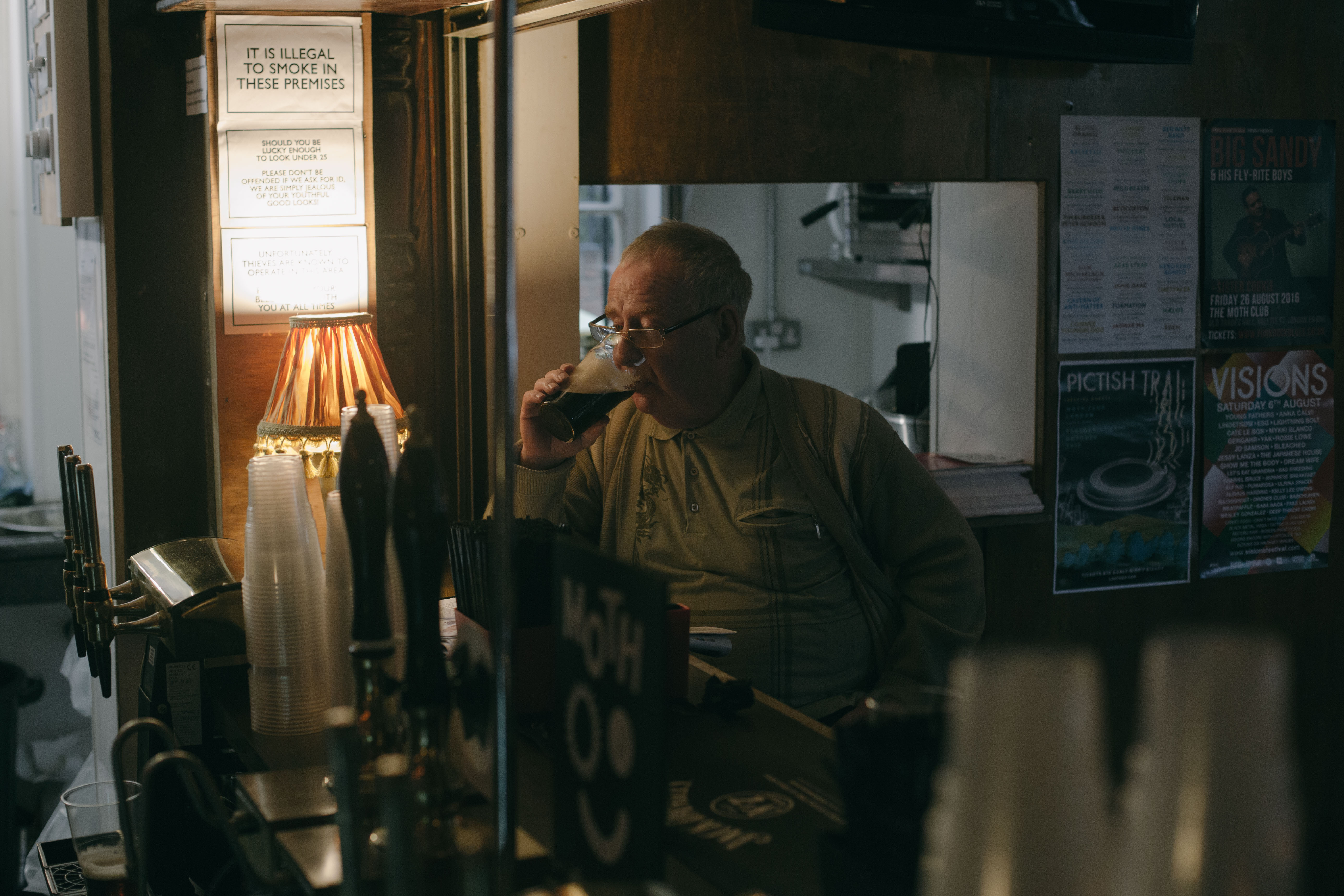 Next door in the concert hall, the Tijuana Panthers are loading their equipment on to the stage. “There’s something of a slightly surreal, David Lynch feel to it,” explains Chad Wachtel, the band’s singer and guitarist, capturing the vibe perfectly – which the new owners were keen to preserve. 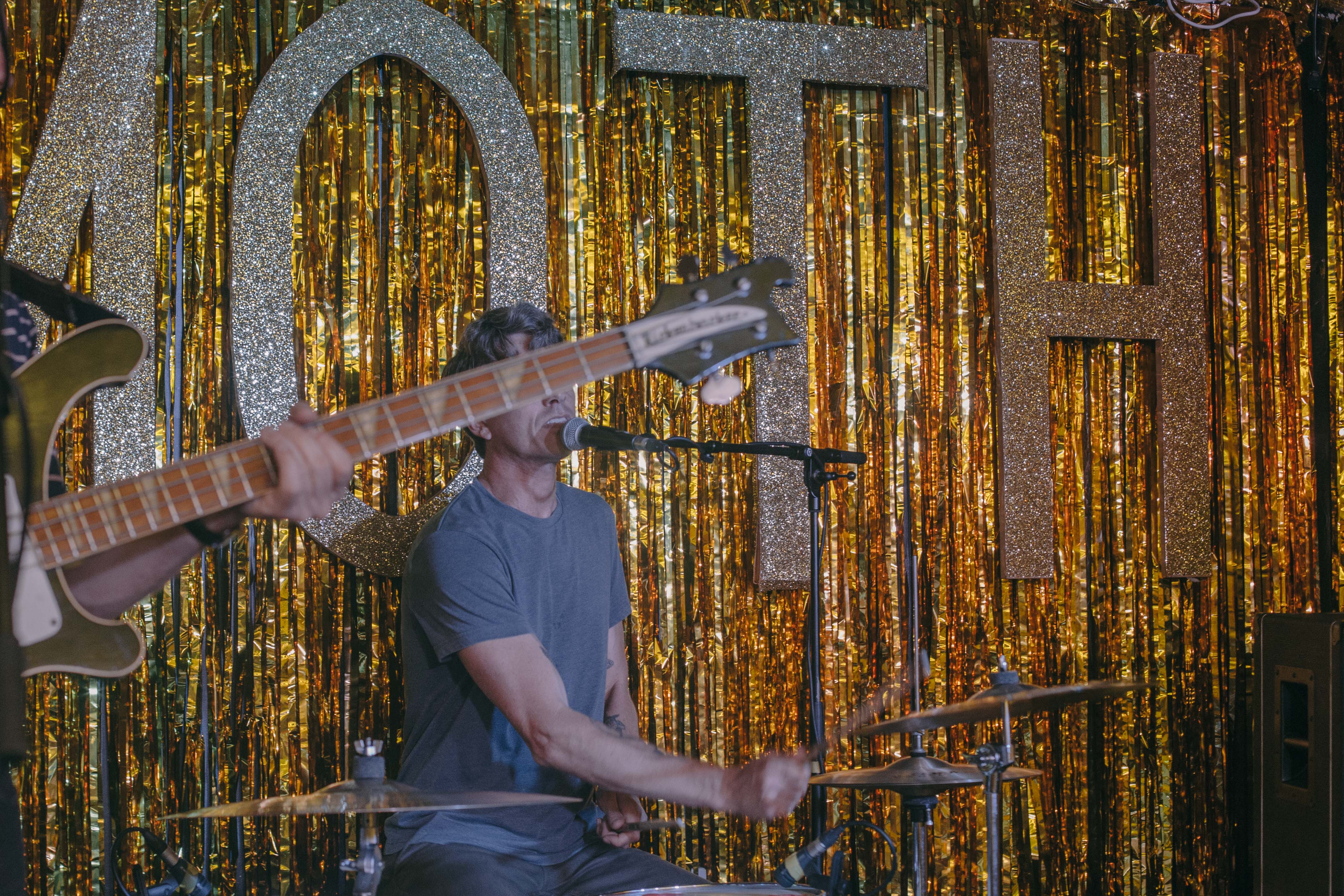 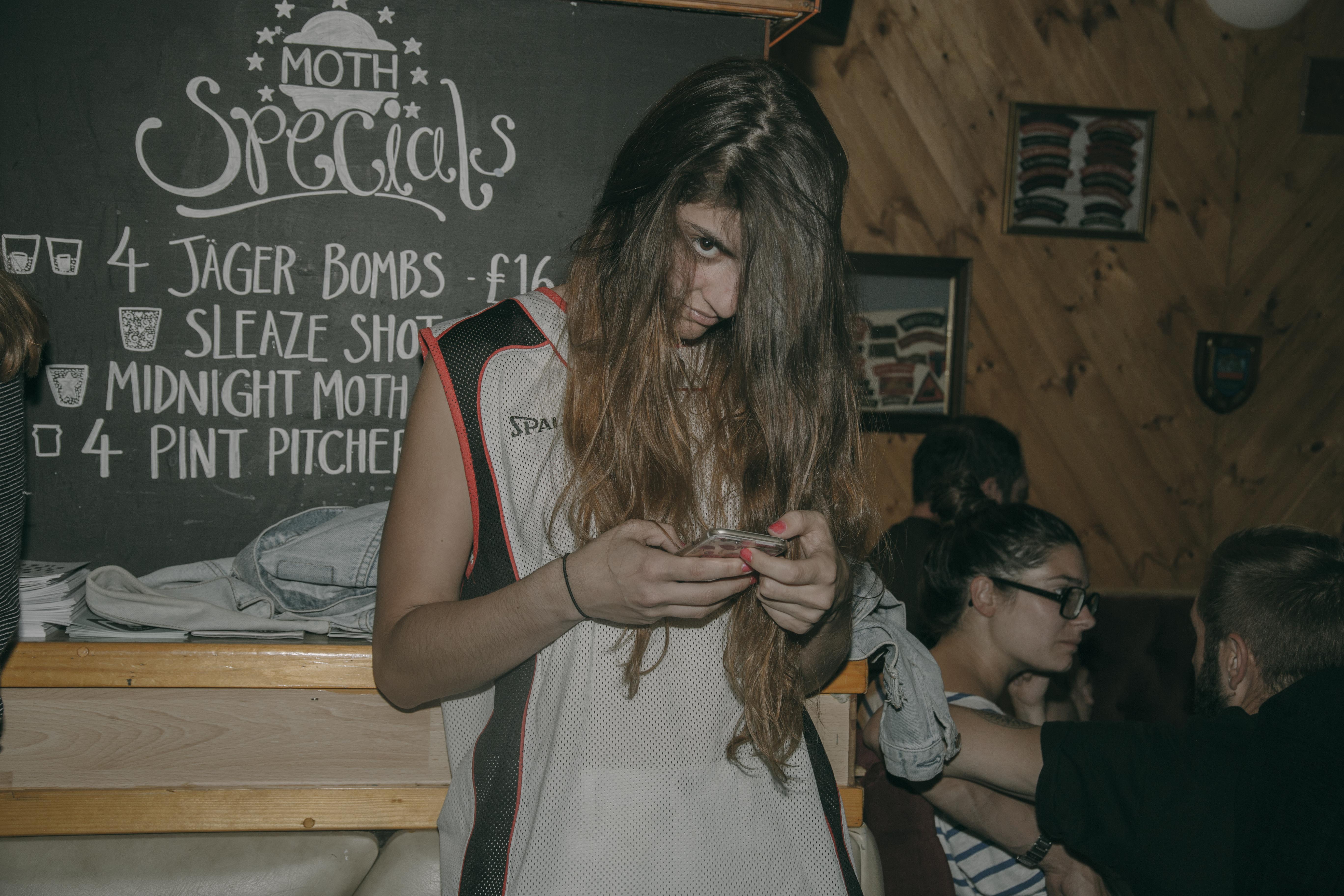 A short way down the road, in neighbouring Tower Hamlets, lies Bethnal Green Working Men’s Club, which was founded in 1887 and is still owned by its members, unlike many other venues. Like M.O.T.H., its faded ‘70s decor gives it a feel of being left behind by the world outside. The club once boasted around two-thousand members but today just 70 pay their dues, with only 15-20 putting in regular appearances.

The area’s traditional white, working class has declined as the docks and factory work that used to sustain them have gone. Many moved on to places like Essex as house prices rose and have been replaced by the area’s newer Asian community. Today, the club’s most popular events include the David Lynch-themed alternative cabaret night the Double R Club, a number of LGBTQ nights and drag event Sink the Pink. 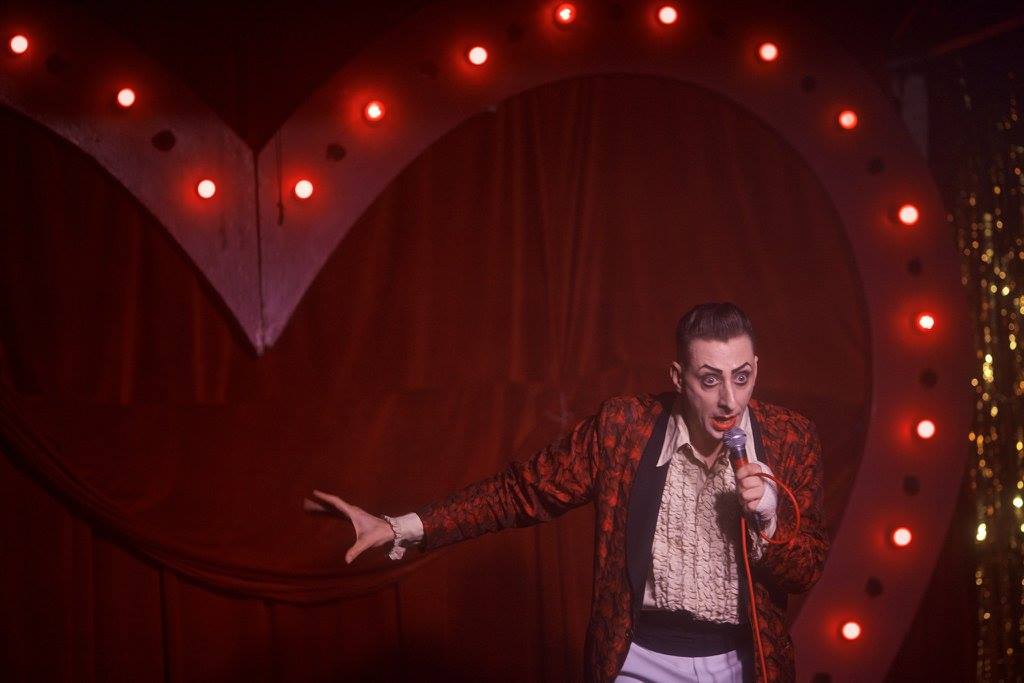 On a quiet Sunday afternoon, downstairs a group of members in their 60s are playing cards for small change on one side of the darkened room, stained by decades of cigarette smoke.

On the other side of the room, I sit down with Brian and Richie. Richie, 68, has been coming down since he was six. So, what does he make of the left-field events that are keeping the club in the black?

“It’s all keeping it alive and that’s great,” says Richie. “They’re enjoying theirselves and I like to see the place full again. People come down and say, ‘We didn’t know anything like this was around here.’ It fascinates them because it’s like a timewarp.”

But how long can a relic like this survive?

“What they’re doing now is working,” Brian explains. “It’s shabby chic, bordering on crap but the new crowd seem to love it. Although, eventually when the fads change, the club will have to change. But there can’t be many places that would hold all these different sexualities and groups together.”

The previous evening, there was a queue down the street just like in the club’s ’80s heyday, but the new Saturday night crowd were a glittered-up, technicolour bunch of all genders and sexualities, who turned out for the riotous Miss Sink the Pink, a Miss World parody for drag queens. 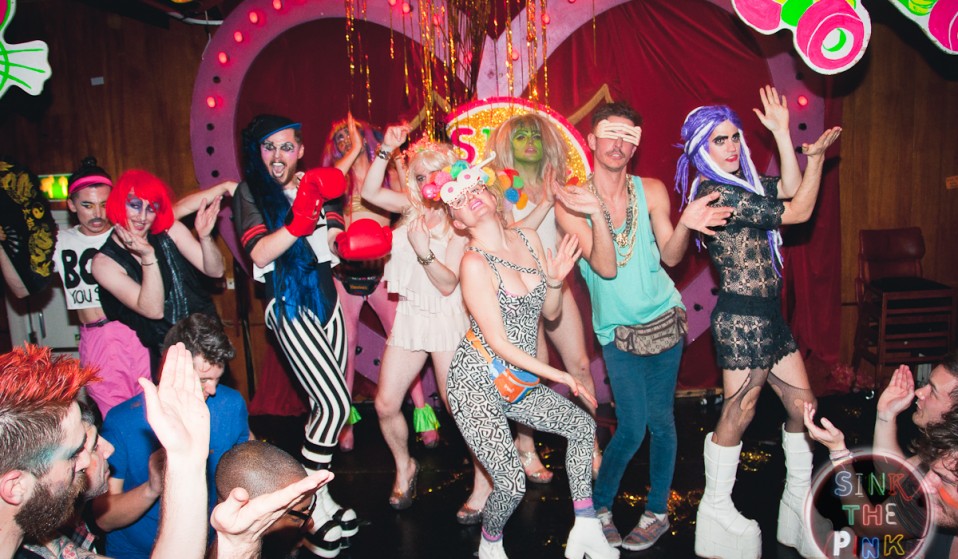 Inside, I spot queer style icon Sean Miley Moore who brought drag to primetime TV when he competed in the X-Factor last year. Born in Australia, he’s spoken out about how London is the only place he feels accepted and able to be himself. While LGBTQ events have been particularly affected by the closure of independent venues, the tolerance and openness of places like BGWMC have allowed all-inclusive events like Sink the Pink to thrive, provided a home for alternative communities and, perhaps most importantly, given many like Sean a place to be themselves.

They might rarely share a drink together, but East London’s fading working class have found a way to co-exist with the capital’s alternative bright young things, whose culture is also threatened by ongoing gentrification. It’s a live-and-let-live attitude that’s allowing each community to survive and providing a counterweight to the homogenisation of London’s nightlife.

“I don’t mind anybody coming down here,” Brian says, the following afternoon. “If they run round here stark bollock naked I wouldn’t care a toss. At my age, I don’t like to see some of the full-on things that happen here, but as long as I can have my pint in my own little area, what goes on around us is OK.”

Linkedin
RELATED ARTICLES
OTHER ARTICLES
David 'Dee' Delgado’s photo project is about honouring and uplifting the city of his youth, and a world rapidly disappearing under the relentless onslaught of gentrification.
Jeffrey Henson Scales intimate portraits and protest images of the BPP and its leaders offer a rare insight into organisation at a time of societal upheaval.
A new podcast is opening up the conversation between trans women and trans amorous men in the hope of building coalitions.
After building his reputation covering the US civil rights movement in the 1960s, the photographer went on to produce some of the most enduring images of the past century.
Zsófia Sivák’s ongoing project documents the country’s tavern culture, preserving a once defining part of rural life.
After blocking the Scottish government’s gender recognition reform bill, Westminster is now devising further changes to the law to make it harder for trans people to self-identify.