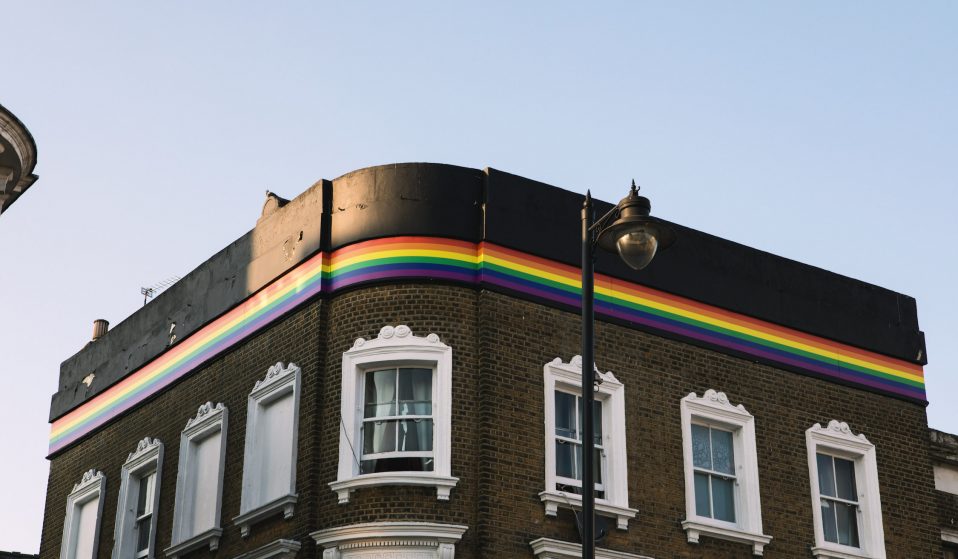 Alim Kheraj discusses his new book celebrating the capital’s vibrant LGBTQ+ scene and the patchwork of bars, clubs, shops, Pride events, saunas and sex shops that have catered to the queer community.

Alim Kheraj discusses his new book celebrating the capital’s vibrant LGBTQ+ scene and the patchwork of bars, clubs, shops, Pride events, saunas and sex shops that have catered to the queer community – both past and present.

Alim Kheraj’s debut book, Queer London: A Guide to the City’s LGBTQ+ Past and Present, arrives at an anxious time for London’s queer spaces, communities, and cultures. As Kheraj writes in his introduction: “Over the years I had spent venturing onto the queer scene, nearly 60 per cent of London’s LGBTQ+ venues closed. This was thanks to a mixture of redevelopment, rising business rates, sky-rocketing rents and change of ownership.”

Indeed, London’s queer scene has been subject to tumultuous change over recent decades. Conditions were already precarious, with staples such as Madame Jojo’s and The Joiners falling to the insatiable demand for gentrification. But the devastation wreaked by Covid to the hospitality sector at large has increased the threat against these spaces tenfold, with new questions arising around the future of much-loved historical venues, such as The Admiral Duncan, Retro Bar and the King’s Arms.

What feels certain is that the queer London which fell into stasis in March last year is not the same queer London we’ll return to over the coming months. Commercial mainstays like Heaven and G-A-Y are unlikely to be affected, but it’s far from defeatist to imagine that more closures are on the horizon. While some LGBTQ+ venues have benefited from the government’s Cultural Recovery Fund, it’s hard to know whether that will be enough to prevent further shuttering.

Nevertheless, there’s room for cautious optimism. Perhaps going out will change radically: there were signs before the crisis that London’s queer scene was embracing nomadism, as evidenced by such popular pop-ups as The Chateau, and you can certainly see a future in which that becomes de rigueur. Some might even suggest that the London scene has become musty, and a bit of fresh air could do it some good. With all of this in mind, we spoke to Kheraj about the past and future of queer London, the monopolistic grip of the G-A-Y empire, and the ever-evolving nature of language within queer communities.

The book is, partially, a Time Out-esque guide around queer nightlife in the city, but you also write about the histories that undergird queer London in the present.

Yeah, because people just don’t know these things. And how would they know? People talk about the queer community, but it’s not a community in the traditional sense. Because there are usually no familial bonds it’s very much a found thing, and we tend to gravitate towards people our own age. Not everyone [has an interest in queer histories], or they do, but they think: “I don’t know how to find out about that?”

So I always thought what if people do have an interest in this, but don’t want to pick up a really big, scary academic historical text, or read an Alan Hollinghurst novel? I think it helps people understand the position that queer London is in right now, with all the different scenes, and all the closures. You can look at the figures and think “Oh god, this is so depressing,” but it’s not anything new.

Despite the closures, there’s something exciting about how the scene is increasingly nomadic. I’m thinking about pop-ups like The Chateau, previously in Camberwell. I think there’s room for cautious optimism, actually.

I completely agree with that. When I was a teenager, growing up in London, it was all gay, male, white. And I don’t see it that way anymore. I mean, it still is, I would say eighty to seventy per cent that, but other communities are making space for themselves. And they have the opportunity to do that, because they’re not limited to physical venues.

They can think: ‘Well, perhaps we’re not welcome here, but we will do something elsewhere’. And that’s why you see things like Bbz and Pxssy Palace. Now, I would call them London institutions. They’re not that old, but they’re so important to the city’s cultural landscape.

Yeah, and Sink The Pink. It’s a global phenomenon now.

Of course, a certain gay business owner [Jeremy Joseph, owner of Heaven and G-A-Y] has been very vocal about the difficulties that his venues have faced. But I saw someone on Twitter say that if his venues were to close, there would be so many more opportunities for smaller spaces, because they wouldn’t be undercut.

If they were to close, what could crop up in their wake? Obviously, you want a venue like Heaven to stay as Heaven, because it’s a historical cultural institution. But does Heaven have to be G-A-Y? Or could it be something else? 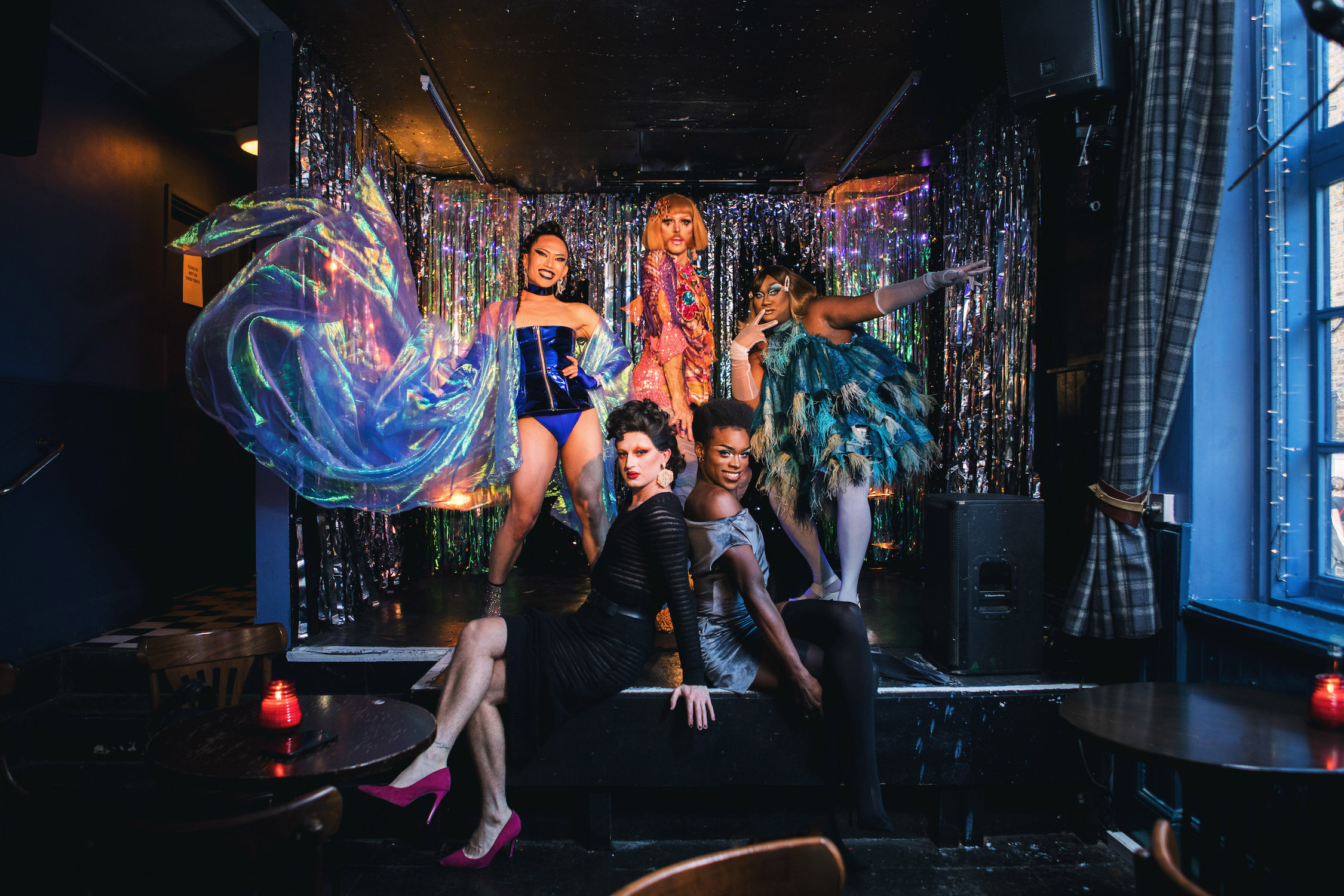 G-A-Y is frequently derided, is that fair?

Yeah, I think it is fair. Only because [Joseph] did it to himself. You know, not even ten, twelve years ago, you would hear multiple stories about queer women and lesbians who wouldn’t feel welcome in that space. And that man [Joseph] did post racist things. The door staff are aggressive and have been abusive, and I think behaviour has gone unchecked in those spaces.

That said, he [Joseph] has done a lot of fundraising for charity, he listened and learned and reached out to UK Black Pride, and he’s done a lot for the community. He made the scene more commercially appealing, which is a double-edged sword, isn’t it? The derision during the pandemic has been a bit cruel. It’s easy to laugh at G-A-Y becoming a vaccination centre, but it speaks more to a wider issue of the government’s mishandling of the pandemic. I think all the other stuff, that it’s a white twink haven, that it’s for people under the age of, like, sixteen, and all of that – I think that’s justified because that’s what has been…

You don’t use “queer” solely as an umbrella term in the book – it also serves that function, but you deliberately differentiate between “queer” and “gay”. Is it important that we don’t treat them as synonymous?

Yes. But you can also treat them as synonymous. The reason I was careful around that is because I know a lot of lesbians feel erased when they’re called queer women, [they feel]: ‘I’m not a queer woman, I’m a lesbian.’ The same with some gay men, too, they think: ‘I’m not queer, I’m a gay man.’

Particularly of the older generation, right? “Queer” is often felt to be derogatory among our elders, and there’s a reluctance to use it.

Yeah. I think some of that discourse verges on transphobia, and can come from a transphobic place. But some of it doesn’t, and I didn’t want anyone to pick up the book and think that they’re being erased. So I’ll often say ‘queer women and lesbians,’ or ‘queer and gay men’ in the book, so that it was as all-encompassing as possible – and no one tries to cancel me. 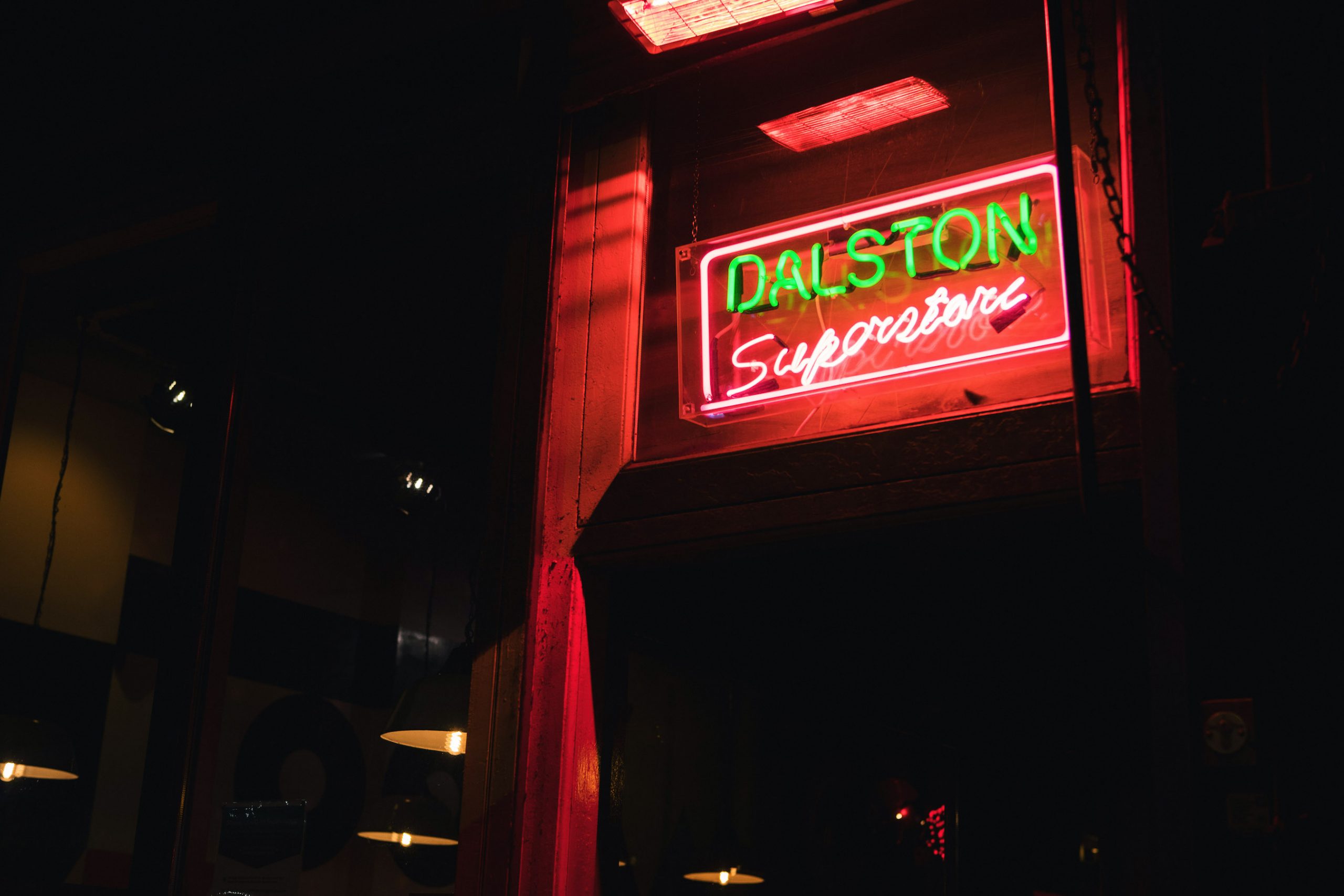 Queer lexicon can be such a minefield to navigate. A word I wouldn’t ever use is “dyke,” but that’s still such an important identifier for a lot of lesbians of the older generation. I have a lot of sympathy.

I think it comes down to intention, doesn’t it? I’ve really worried about this. Actually, this has been my biggest worry. A couple of weeks ago, I had real kittens, just thinking: ‘Oh my god, what if I’ve said something that people think has transphobic connotations, or is anti-bisexual,’ or whatever. But I know what my intention was when I wrote it. And I think you can get that intention from the book.

If there is a term [in the book] that people don’t like, that didn’t come from a place of ignorance or a place of derision, but from the fact that language, especially around LGBTQ+ subjects, is constantly evolving. People aren’t going to like everything, and that’s fine, because it was just me, I had to do it all myself. It’s not published by one of the big, major publishing houses.

But it’s also one book, right? It’s a Sin, for example, was criticised for not being more broadly representative. But we should focus on the lack of a more expansive queer media. It shouldn’t be the work of one book, or one film, to cover all of these topics.

I agree. If you just go, ‘That doesn’t represent me’ rather than think ‘What can I do to make something that does,’ I think you’re going to go around in circles.

Obviously, there are limitations to that, because of gatekeeping and lack of access and institutionalised racism and, you know, a whole encyclopaedia of reasons why those things don’t happen. But I think we’re seeing more of that action now, especially with some of the brilliant creative forces that are out there. 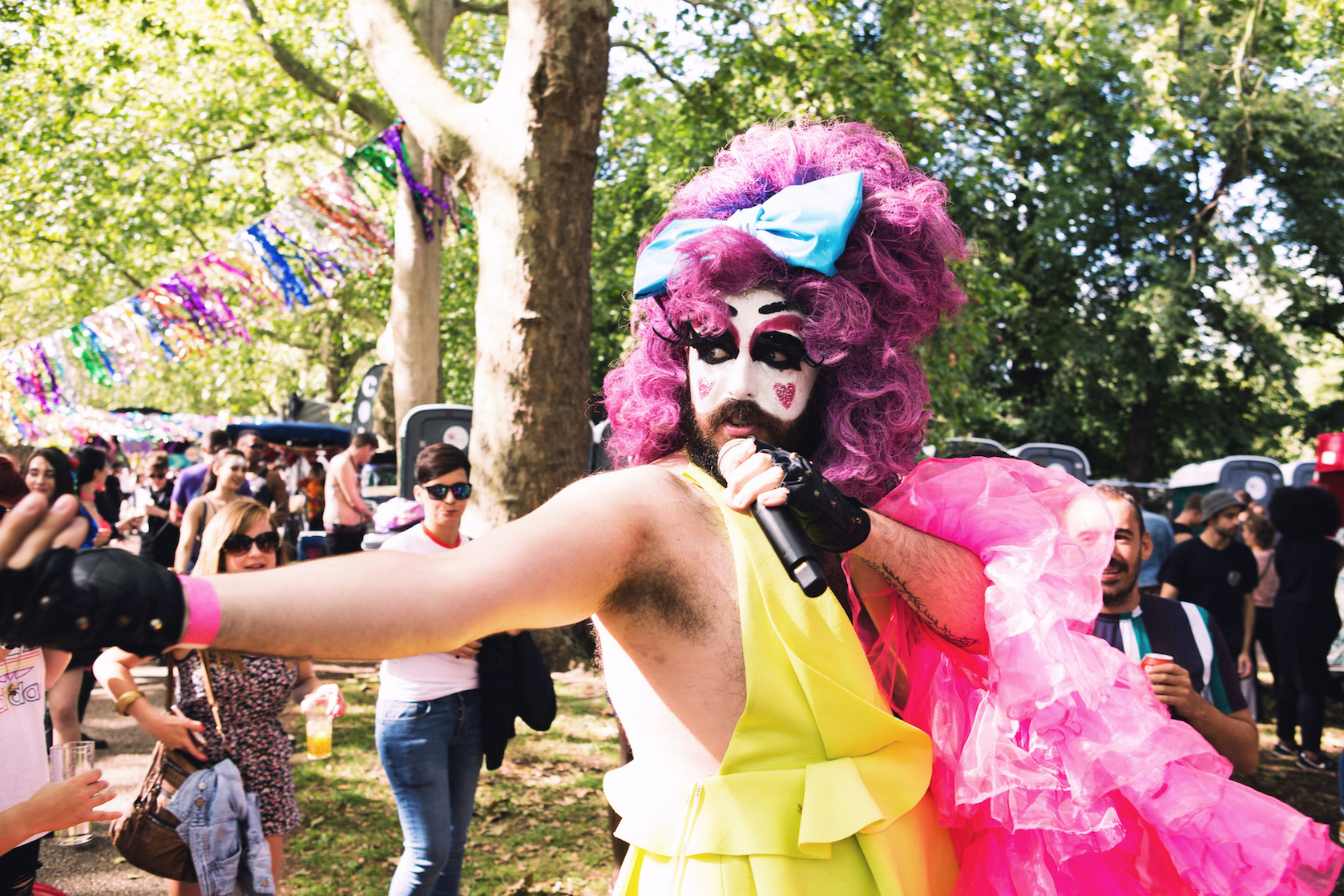 The most popular queer histories and myths tend to be quite US-centric, the best known, obviously, being Stonewall. Is that something to disrupt?

Yeah, I think so. Even Stonewall wasn’t the birth of gay liberation. You know, there were the trans riots in San Francisco before then…

Yeah, exactly. There were things before Stonewall. The UK is interesting because so much of the pre-1967 stuff is just… gone. You know, it was all very secret. And there wasn’t such a momentum as there was in the US until after Stonewall. This is why you can look at Stonewall in the UK and think this was the birth of gay liberation, because the year after we got the [Gay Liberation Front]. But it’s a revisionist history, isn’t it?

I think so. If we lived in a society where people weren’t still being persecuted, and there wasn’t a rise of LGBTQ+ hate crime, and trans people weren’t being demonised – if we lived in a utopia, basically – then fine, don’t engage with the history, you don’t need to learn anything because we’ve already got everything.

But we don’t have everything. I think you need to look at the mechanisms and examples from the past to know how to handle the present pushback, because no one’s going to teach you how to fight oppression. No, you’re going to have to look at how other groups have done it and borrow from them.

Queer London: A Guide to the City’s LGBTQ+ Past and Present is out now.

Linkedin
RELATED ARTICLES
OTHER ARTICLES
Photographer Alice Mann reflects on capturing the camaraderie and discipline it takes to succeed in a highly-competitive sport.
Ahead of the policing bill reaching its final stages in the Lords, protestors came together to rally against the legislation.
From Brooklyn gang members, to Welsh miners and the residents of East Harlem, Bruce Davidson used his camera to shine a light on the most marginalised.
Those set to be impacted by the governments ’undemocratic’ bill explain why it risks silencing them.
The novelist discusses his electrifying debut, which offers a deft examination of masculinity under late capitalism.
Despite the easing of Covid-19 restrictions, the issue of over-policing on university campuses remains.