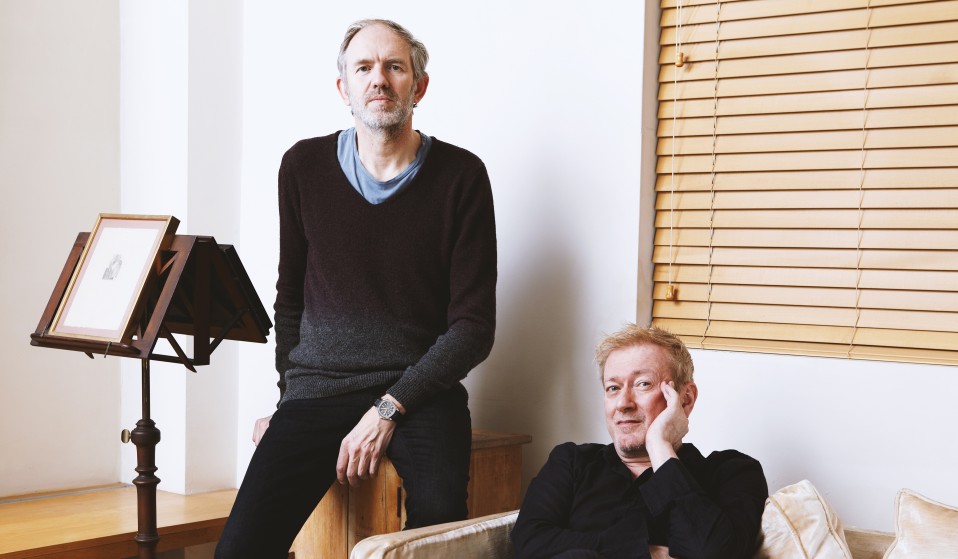 Growing up on the outskirts of a scene spurred Gang of Four’s Andy Gill and music photographer Anton Corbijn to cement themselves at the centre of their own creative worlds.

Andy Gill of iconic post-punk band Gang of Four and Dutch photographer and film director Anton Corbijn – whose music photography, videos and films have helped shape popular culture since the ’70s – have been good friends since meeting in the underground New York scene in 1979.

Corbijn’s latest film, Life, is about a pre-fame James Dean and his friendship with photographer Dennis Stock. Gill has recently put out a new album, What Happens Next. One cold February day, we joined them as they chatted over the kitchen table at Andy’s house and found out that longing for something you don’t have can be as influential as being in the thick of it.

Anton: I was born on an island [Hoeksche Waard, in the Netherlands], where I lived until the age of eleven. Even in the mid-’60s on an island there was a notion of The Beatles, you saw pictures and there was excitement. To me this thing that came from outside the island really intrigued me and was like a promise of a more interesting life than living in a very religious community. My father and uncles and grandfathers were all ministers.

Andy: As a teenager we lived in Sevenoaks in Kent and I remember hanging out the window, smoking cigarettes and looking at the orange glow of London thinking that’s where I wanted to be. It’s a much milder version of what Anton was talking about. I was in bands with my brother playing drums and we’d play at parties and village halls or even at school, so by the time I was at Leeds University it wasn’t at all an unnatural thing to do that again. […] I think the turning point was in 1976, when we went to New York.

We stayed with [filmmaker] Mary Harron at her Greenwich Village place on the sofa, and went to CBGBs in the evenings to chat with Joey Ramone or John Cale or The Patti Smith Group – these people we thought were amazing. After that we came back to Leeds and began Gang of Four basically. […] Meeting certain people and being inspired by them does change the way you think and changes your life. Much more than anything else I can think of.

Obviously things like films and books and photographs and pieces of music can change the way you think about things but meeting people gives you the feeling of, ‘I can do that.’ It gives you confidence and inspires you in your own field. The thing that holds you back is not being able to see yourself doing something. You have the idea but you think you can’t really do it. You get the confidence to do it when you see other people do it and you figure out how to get from A to B. Usually it involves a lot of work. It always does, it always does. 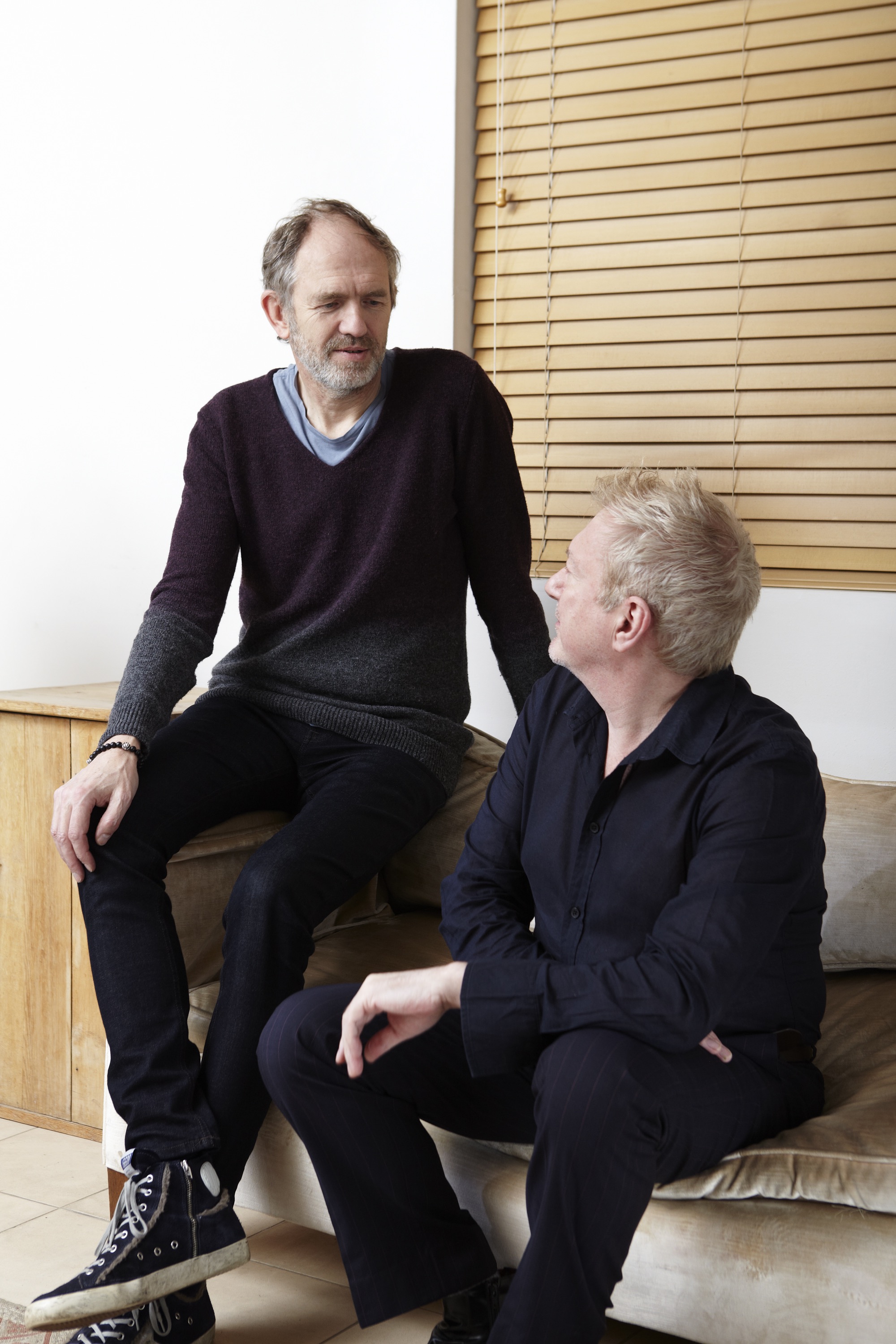 Anton: I had no idea what I wanted to be, I just wanted to be near music but I accidentally borrowed my father’s camera to overcome my shyness to walk up to the stage. I took a few pictures and sent them to a magazine and they printed them. Eureka! […] I was just excited to be near music, that was a big mission for me in life. I was excited to do portraits and photographs in environments that were not so common in the music world – it was kind of half-documentary, I’d still set up but then I’d let people loose.

It’s partly because of my governistic upbringing that I was always interested in man and his environment but I took it visually. […] I’ve never been a studio photographer so every picture I take is like reinventing the wheel almost. You go to a place and you’ll see how the light works for you, there’s no constant in my photographs and so you always have to find something. That keeps me on my toes.

Andy: It’s funny you say that actually, as I feel that about songs. I think when I start a song I don’t know what it’s going to sound like, there are no rules. It’s always starting from scratch and you ask similar questions but you go in a different direction. It is like reinventing the wheel, every time.

Anton: With all the things that I didn’t like in my youth, I’m very happy of what came out of it. Because if I was very happy as a kid and wanted to study – it’s kind of a desperation that drives you. When you’re happy it’s an exaggerated state of mind I think, and I’m always partly unhappy and happy. I’m very grateful for everything I’ve been given and moments I’ve shared. If you know more, then you do things differently, but the beauty is that you don’t know and you find it out.

Andy: And that’s life isn’t it? Obviously I’d say probably piss around less, work harder, be more focused and then you can achieve more. But that takes time to learn.

Anton: It took me forever to realise where I was.

Andy: There’s no one to tell you how you do this stuff, there’s no mentors, you’re going out on a limb.

Anton: If everything was very purposeful and you know how things will work then it’s not going to be the same journey

Linkedin
RELATED ARTICLES
OTHER ARTICLES
Following the release of his debut single, Deyaz talks battling addiction, dealing with his struggles through music, and building a budding music career from his living room.
After building his reputation covering the US civil rights movement in the 1960s, the photographer went on to produce some of the most enduring images of the past century.
Theo McInnes’s photos of the annual event provide an intriguing snapshot of contemporary Britain.
After fleeing the war in Ukraine, people are finding it impossible to secure affordable and decent housing in the UK.
AI companies that develop image-generators using copyrighted artwork from the internet are coming under fire from artists who say that it amounts to theft.
Activists and campaigners are fighting back against new laws that would seriously undermine the ability to take industrial action, calling it an attack on fundamental workers' rights.