Art & Culture / Art / A portrait of love, life and community in the South Bronx 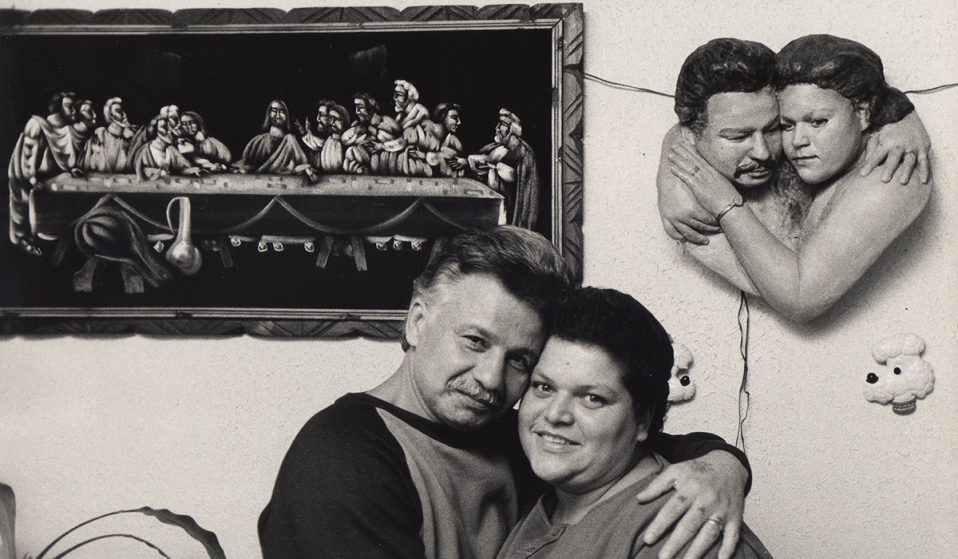 In the ’70s, New York’s South Bronx was in a state of extreme disrepair. But – as artists John Ahearn and Rigoberto Torres realised – creativity provided a welcome remedy.

In the ’70s, New York’s South Bronx was in a state of extreme disrepair. But – as artists John Ahearn and Rigoberto Torres realised – creativity provided a welcome remedy.

During the ’70s, the South Bronx became the face of urban blight, as the federal government systematically denied basic services to Black and Latinx communities under the Nixon White House policy of “benign neglect.”

As neighbourhoods fell into extreme states of poverty, crime, and disrepair, landlords realised they would make more money torching their buildings and recouping the insurance money than they ever could from rent — leaving the South Bronx with vast swaths of empty lots, burned out buildings, and mounds of rubble.

The stark struggle for survival experienced by regular people in the Bronx inspired artists to create incredible feats, like John Fekner’s epic stencils, Gordon Matta-Clark’s first architectural interventions, and the explosion of graffiti across whole cars. In the late 1970s, Stefan Eins moved his gallery, Fashion MODA to Third Avenue near 147th Street and the Hub in the heart of the South Bronx, where he began exhibiting emerging downtown artists like David Wojnarowicz, Keith Haring, and Jenny Holzer, as well as graffiti artists such as Richard Hambleton, John Crash Matos, and Chris Daze Ellis. 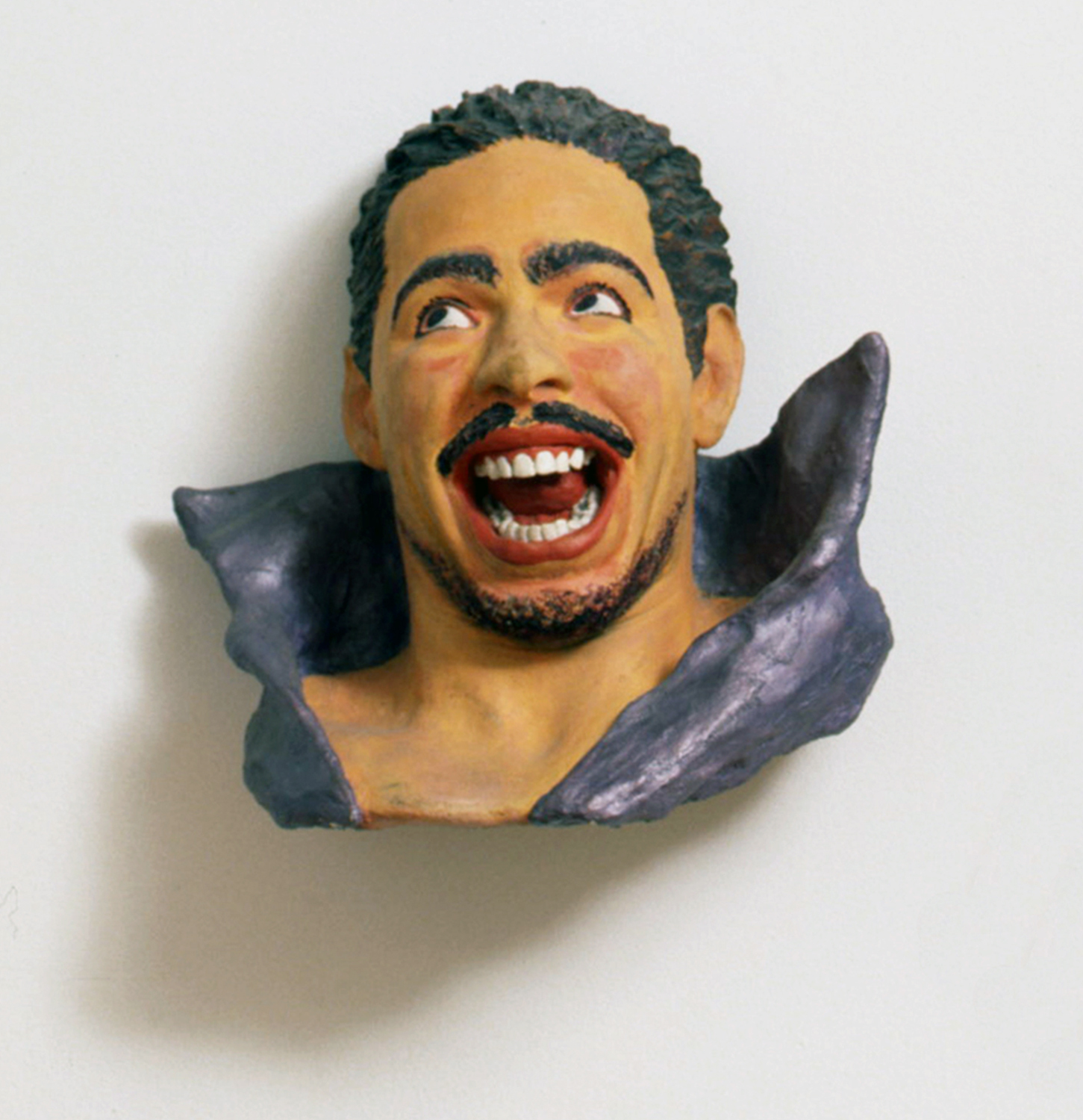 In 1979, Fashion MODA became the site of the “South Bronx Hall of Fame” after Eins invited artist John Ahearn to do a live casting session in the big storefront windows. “There was a lot of commotion because people thought it looked like there was an accident and someone was hurt,” Ahearn recalls. “People were asking, ‘What is going on?!’”

Ahearn followed his identical brother Charlie Ahearn (creator of Wild Style, the first Hip Hop feature film) to New York in 1974. He had had the idea to lifecast faces while paging through Make-up for Film and Television while staying at Patti Astor’s downtown apartment. Inspired, Ahearn went on Manhattan Cable television to do a face cast of artist Robert Cooney as part of a performance – but it was at Fashion MODA that Ahearn’s process was honed to perfection.

People gathered outside Fashion MODA to watch the scene, witnessing a practice most people in and out of the art world had never seen. One by one, local people from the neighbourhood were invited to model for a cast by laying on their back and inserting straws in their nose in order to breathe as Ahearn prepared then poured plaster over their faces. When the plaster dried, it would be peeled off and painted to become a portrait bust that could be mounted to the wall. 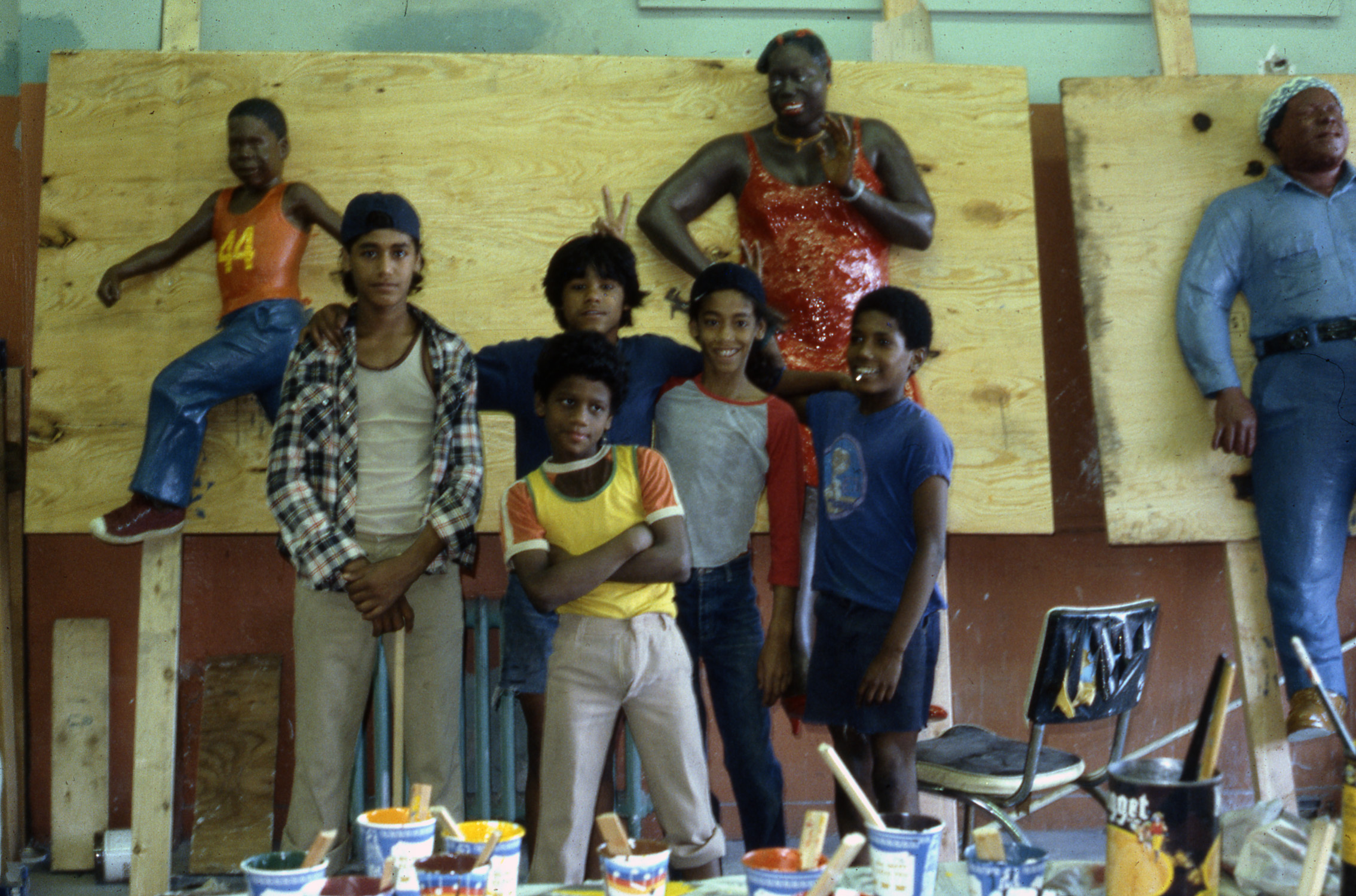 “KBA Youth Center with kids and figures for the Life on Dawson St. mural” 1983. Photo by John Ahearn

“The idea of the South Bronx Wall of Fame came naturally,” he says. “The Wall was a way to show off what we were doing. These were the treasures being accumulated as part of the project. I wanted them to look casually made and more like the kind of things you would have seen in the neighbourhood.”

The South Bronx Wall of Fame became an on-going installation at Fashion MODA that paid homage to the everyday people who persevered against the odds. Once local people saw casts of people they knew, they began commissioning Ahearn to make portraits of themselves and loved ones that they could hang in their homes.

Ahearn spent the better part of 1979 working in the Bronx. One day, an enthusiastic teenager named Rigoberto Torres asked if he could work with me. His uncle Raul Arce had a large statuary factory nearby and Torres inherently understood the connection. 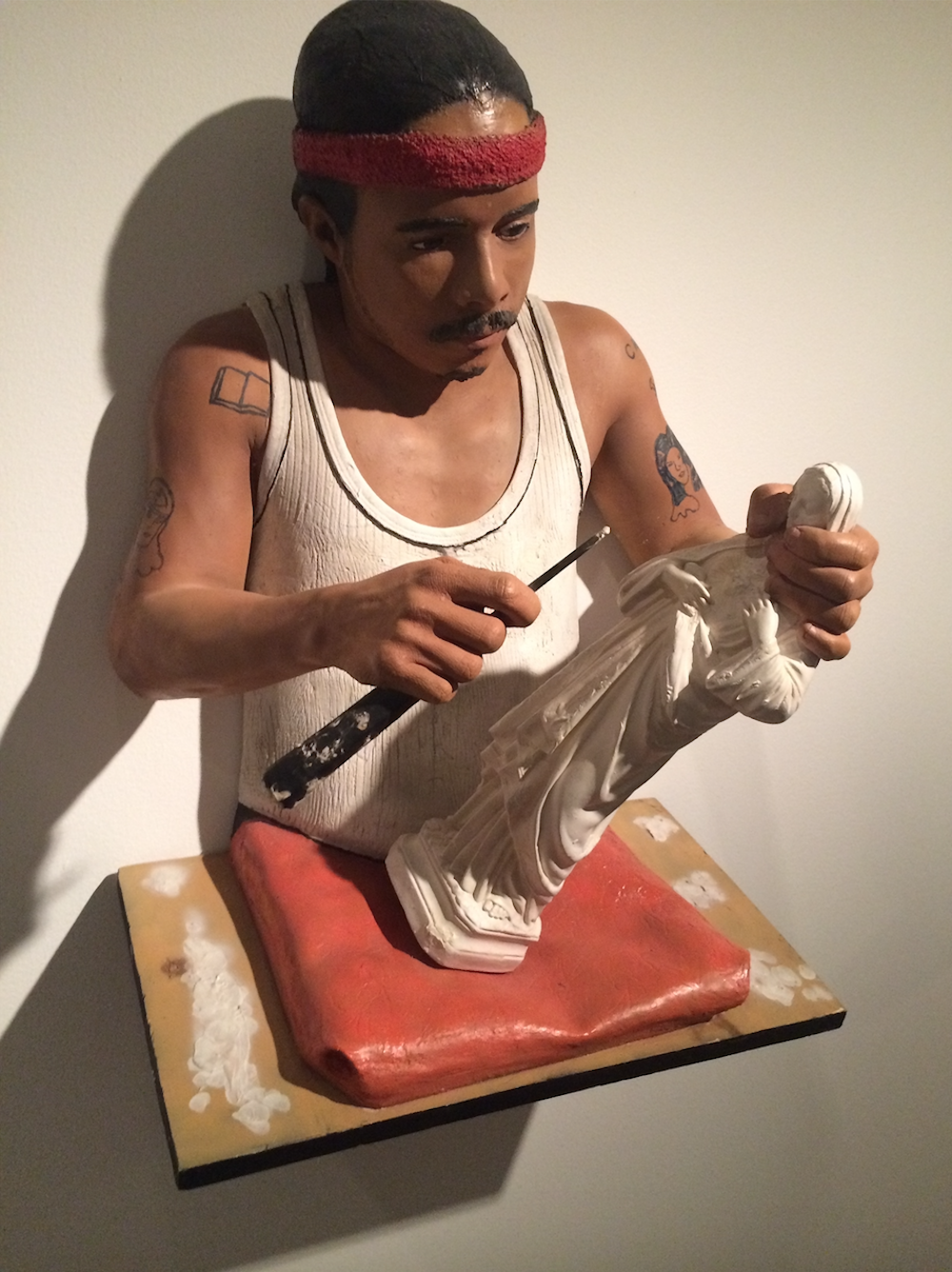 “Shorty at La Fabrica” 1985 by Rigoberto Torres. Photo taken at the Met Breuer by John Ahearn

The following year, Ahearn moved to Walton Avenue near Torres’ family home and they opened a studio together. In 1981, they began a series of collaborations with various community groups, including Art in Public Places, which resulted in the creation and installation of Double Dutch Girls on Intervale and Kelly Streets in 1982.

“When we stepped out on Intervale Avenue and looked around in all directions, there were abandoned buildings, lots, and broken down areas – but in the middle of it all, there was a lot that seemed to be in good condition with one single wall facing straight out that had sightlines for hundreds of feet in all directions. It had great visibility and seemed to represented survival,” Ahearn explains.

Over the past 35 years, Double Dutch Girls has weathered the test of time, not only maintaining its physical and aesthetic integrity, but also defying the onslaught of gentrification. The abandoned area became a city park, but the artwork had fallen into disrepair, so the pieces were brought down six months ago to be restored. 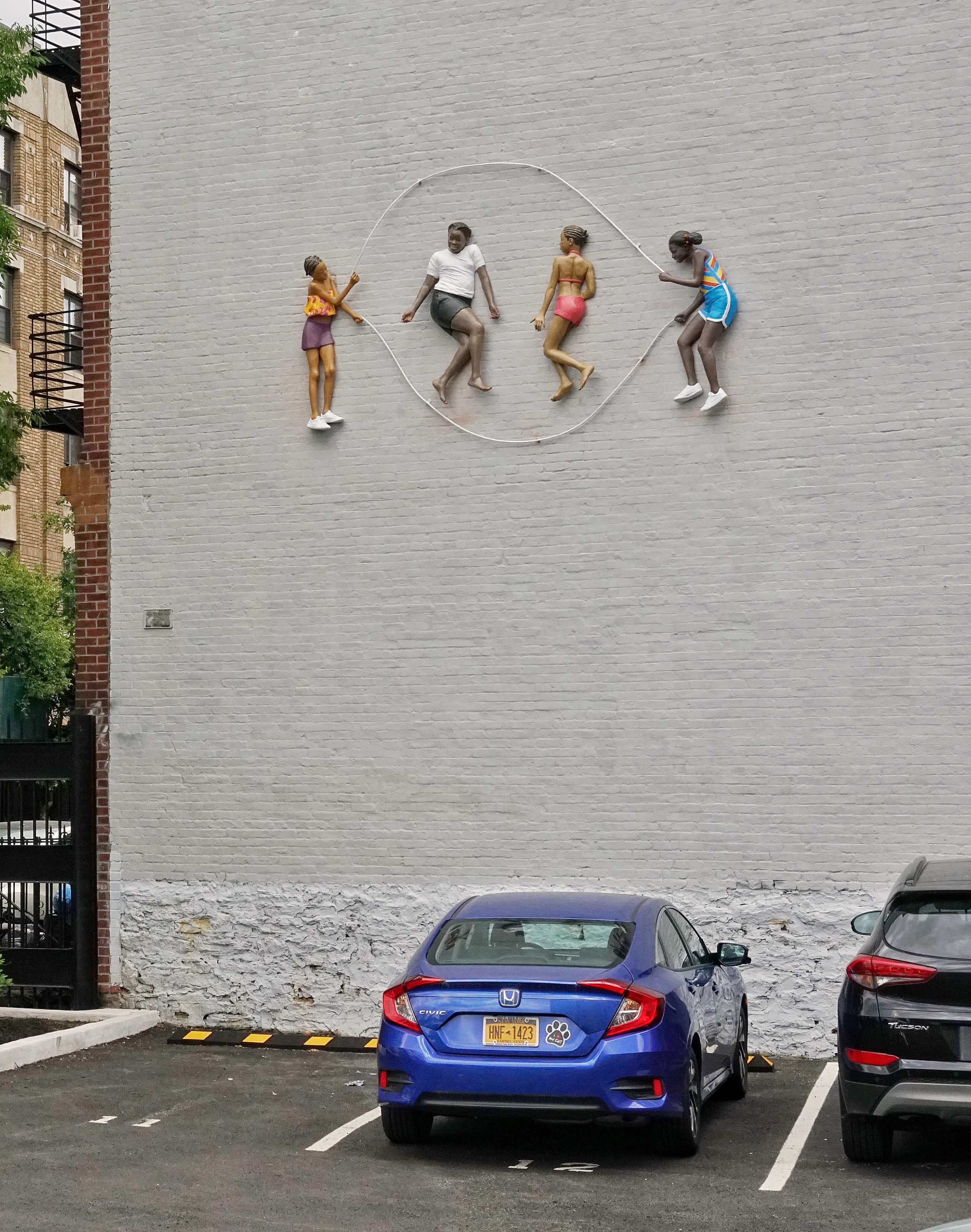 Together, Ahearn and Torres repaired and reinstalled the work so that another generation can enjoy this perfect symbol of the great pleasures to be found in the simple things in life.

“The neighbourhood becomes like a family,” says Torres. “You know everyone and everyone knows you. It’s a beautiful gift to give to people who have not seen art before. We are the gallery; we bring it to them. They get to understand that regular people are in famous places and they feel proud. It brings good memories. It was wonderful to reinstall the Double Dutch Girls. To recognise that you were part of this thing in the beginning, wow. Lost memories came back again.”

Ahearn adds: “It’s a dream and an honour. The pieces look beautiful and have a sense of innocence that I find is just right.” 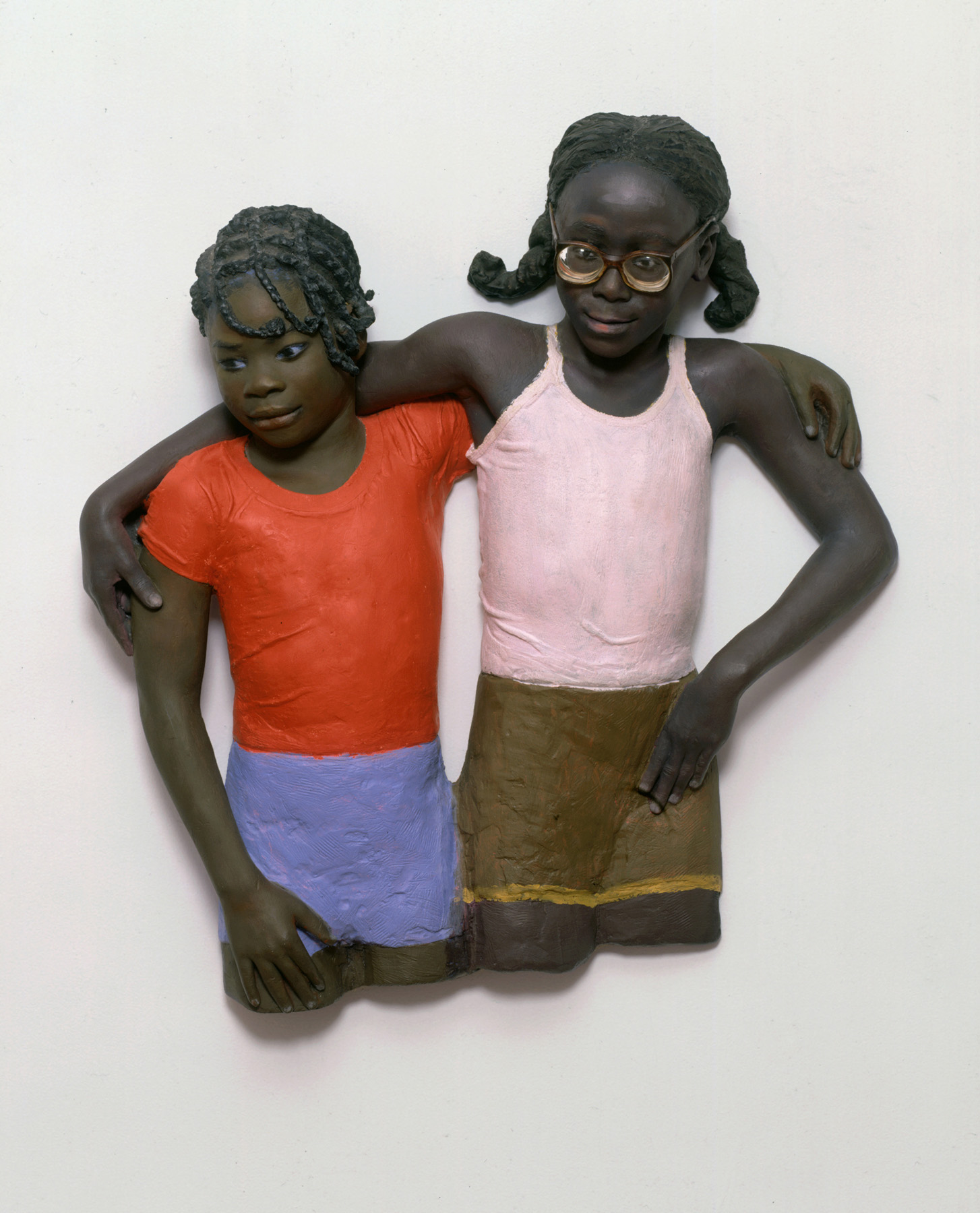 “Janelle and Audrey” JA 1983. Courtesy of Alexander and Bonin Gallery 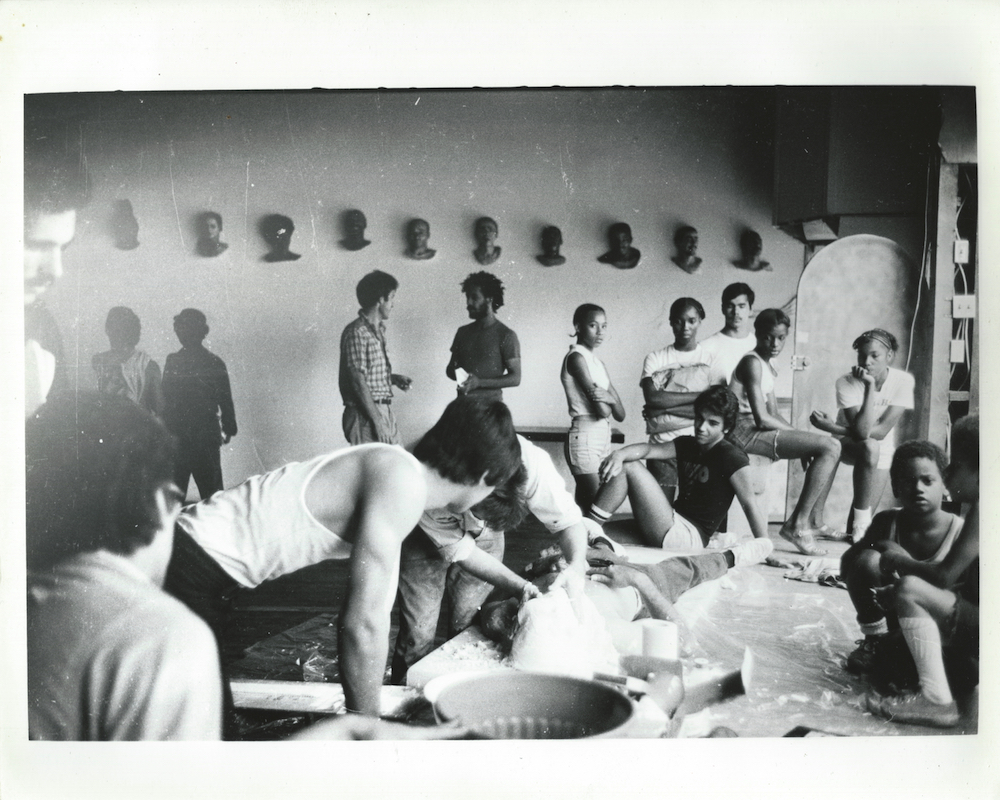 Fashion Moda 1979 with part the South Bronx Hall of Fame on the wall. Bottom foreground Tom Otterness, Rigoberto Torres leaning, and Stefan Eins and Joe Lewis in the background. Photo by Christof Kohlhofer. 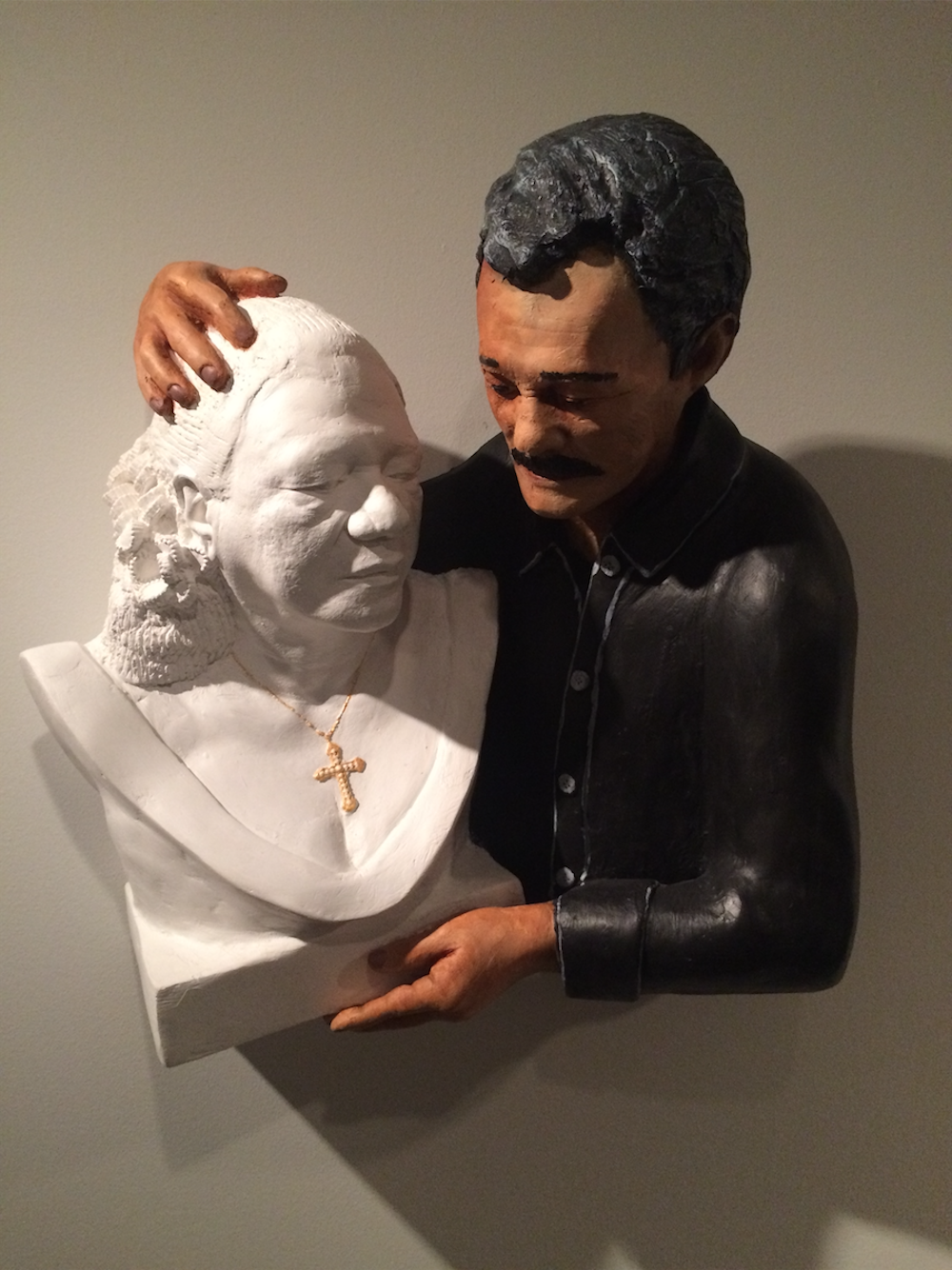 Raul Arce with bust of Ruth Fernandez 1998 by Rigoberto Torres. Photo taken at the Met Breuer by John Ahearn 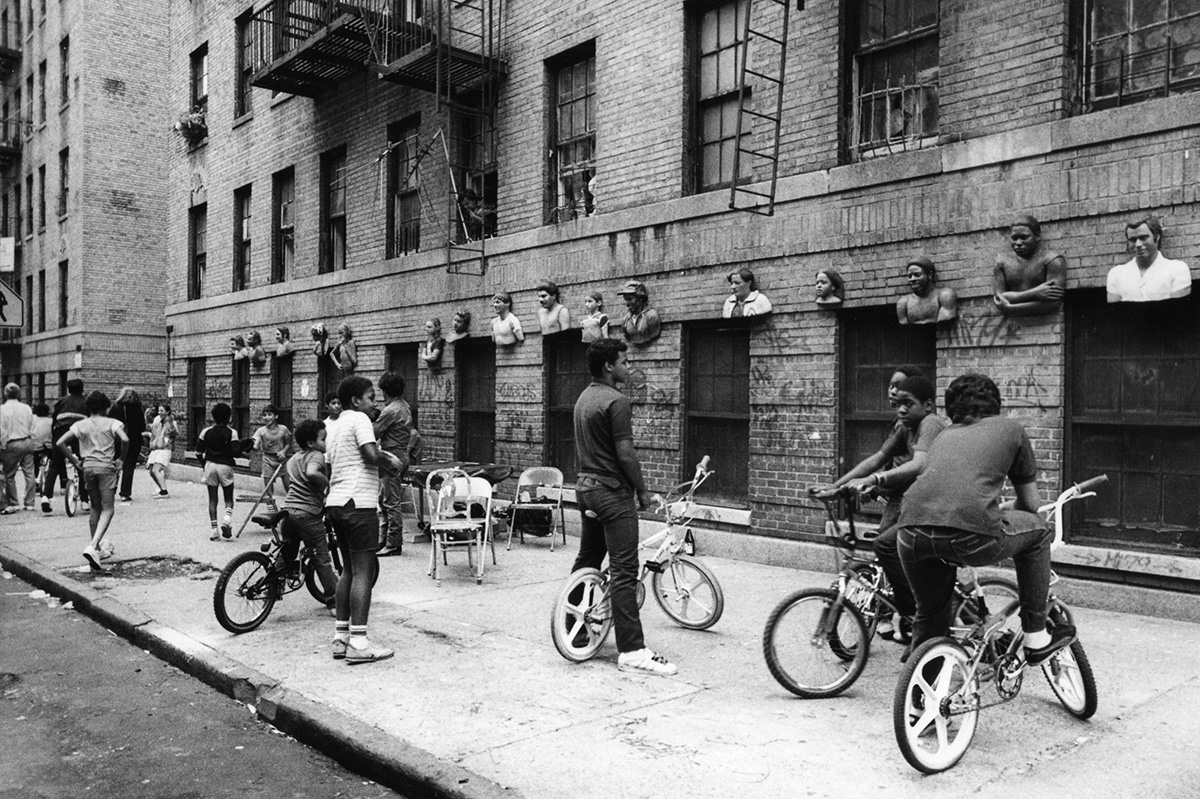 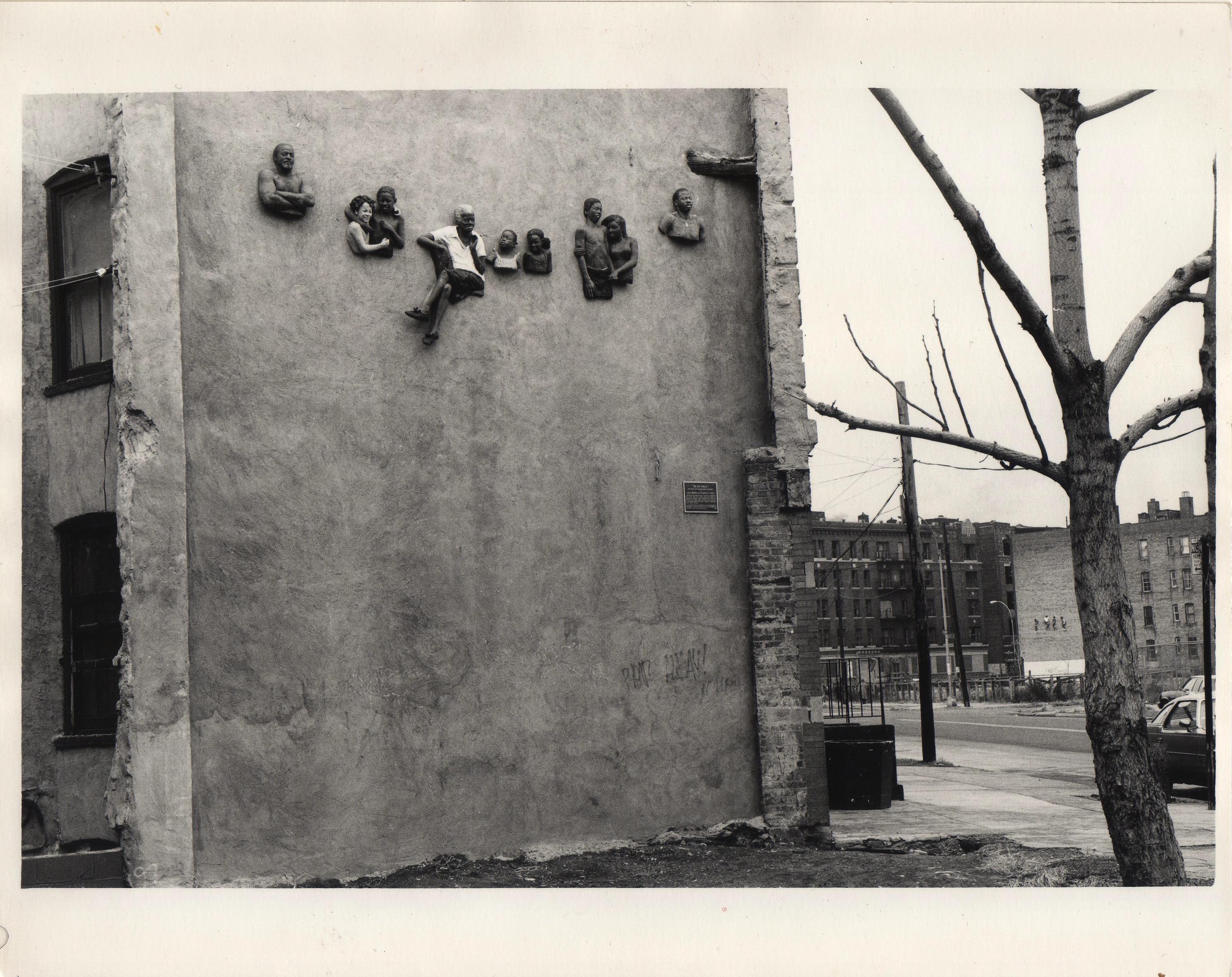 “We Are Family” with “Banana Kelly Double Dutch” seen in the distance 1982. Photo by Ivan Dalla Tana

Linkedin
RELATED ARTICLES
OTHER ARTICLES
Thomas Hoepker‘s images taken during a road trip across America provide a searing social commentary about a divided country.
In the latest instalment of Photographers in Conversation, the chronicler of raves, protests and beyond explains why he’s drawn to such specifically visceral environments.
Proposals to introduce a minimum GCSE threshold for student loans will disproportionately affect those from marginalised backgrounds.
Whether it's partygate, the climate crisis or the spiralling cost of living, the fightback begins on the picket lines writes Tommy Vickerstaff
LGBTQ+ students are keeping the spirit of the original Pride alive by fighting for liberation for everyone, not just their community.
For decades, an area of East London has served as a community hub for Vietnamese people looking for a taste of home.