Aaron Kai tells us why art is the best response to the age of emergency.

Artist Aaron Kai is one of 200 creative people around the world collaborating with Adidas on their [FUTURECRAFT.LOOP] initiative. We met him in Los Angeles to find out why he believes art is the best response to the age of emergency.

“It’s very important to keep a smile on your face and a positive attitude… if we’re all just down and out, nothing’s going to get solved and we’re not going to fix anything.” Los Angeles-based artist Aaron Kai’s work is all about colour, impact and environment. And walking with him through the broad streets of Inglewood you can see  the colourful juxtapositions of tone, line and outlook that come together in the canvases, murals and objects he creates.

“Sometimes just to make people laugh is the best response to any emergency you’ve got,” he says. Aaron’s roots are in the fertile earth of Hilo on the Big Island of Hawaii. “Pretty much everyone around me growing up spent time in the water, surfing, paddling, fishing,” he says, “The big takeaway is not only a knowledge of the ocean’s beautiful fragility — but it’s also a knowledge of the power of the community that can be built around the sea.” 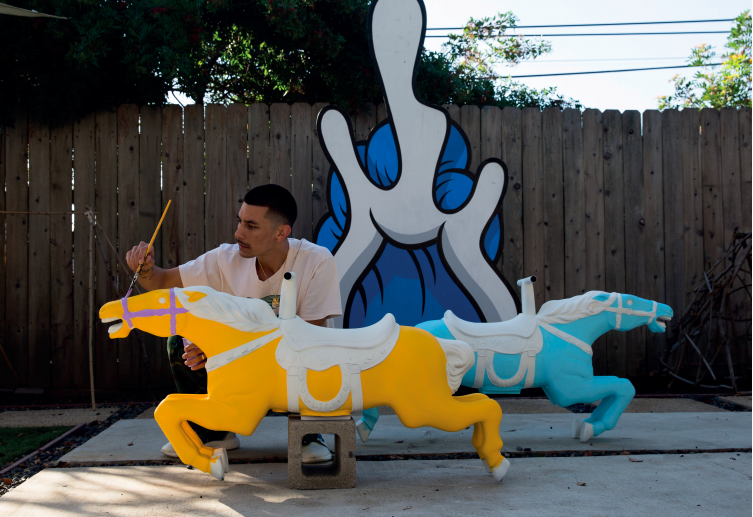 Influenced by the dynamics of Keith Haring’s bugged-out figures as much as the cascading waves of Hokusai, the Aaron Kai aesthetic takes its cue from the offbeat textures and contrasts of the contemporary world. “If my work can put a smile on people’s face but also add another layer of understanding about the environment around us, then I think my job will be done…”

Linkedin
RELATED ARTICLES
OTHER ARTICLES
Thousands attended the annual event this year to wheelie through the city and call for ‘knives down, bikes up’.
By turning a real-life crisis into daytime television fodder, TV bosses have once again shown themselves to be completely out of touch with audiences.
In his 2008 series, the photographer pictured himself as Angela Davis, Martin Luther King Jr., Malcolm X, and other prominent figures.
Ahead of the release of their first collaborative album, the producer and rapper talk psychedelics and the state of UK hip hop.
A new project is documenting formerly incarcerated people as they transition back into civilian life.
As the Scottish government announces a rent freeze, an activist with Living Rent who fought and won shares how they did it, and what must come next.