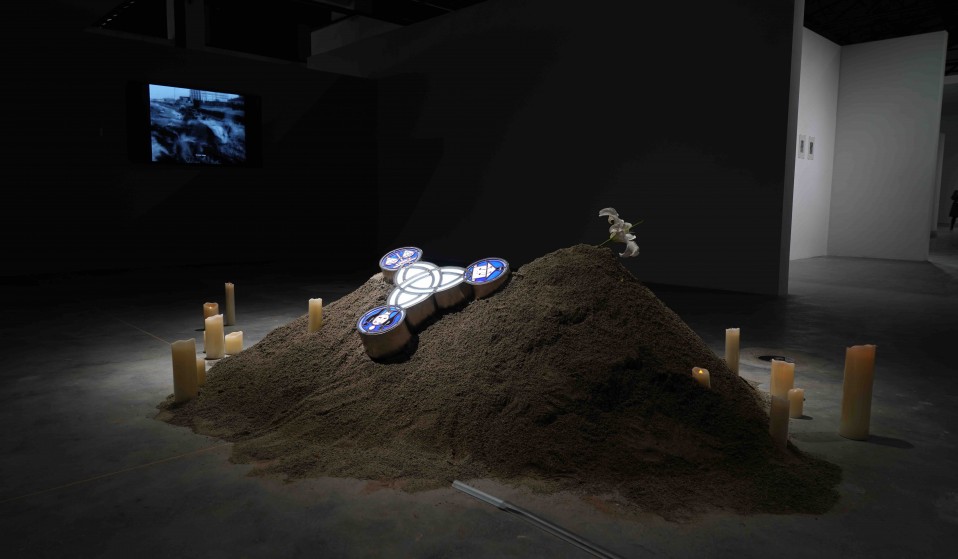 Ever get the feeling the end of the world is coming? London-based, Chinese-born artist Yorkson is trying to help us all navigate our way through.

All too often these days it feels like the end of the world is coming. London-based, Chinese-born artist Yorkson is trying to help us all navigate our way through it.

I was at work last month when the sun turned red.

It was a Monday, about 2pm, the middle of that dreamlike hour after lunch when your digesting body falls into a stupor and your mind levitates away from it. I was abruptly awoken with a loud “what the fuck”. I found myself staring across the office at my colleague who was stood looking out of the open door, soaked in a pool of luminous, rust-coloured light.

A moment later and I was looking out too, my eyes adjusting to this eerie sepia landscape, a dense red sun hanging low in the sky above us. A strange, hot wind licked my skin as I watched the burnt orange sky. It felt like the last dusk before the apocalypse, the sky over the desert in Dune; like we had just been pulled into a purgatory zone between the realm of the living and the upside-down. Outside in the square, the energy had changed along with the light. People had left their workplaces and were wandering about, a cautious excitement in the air. Those gathered were testing out this new environment and speculating about what might now happen.

Like a blackout or a snow day or a strike, regular time seemed to be faltering. Everything stopped as people walked about under this fiery sky, imagining for a brief instant that this moment might change our futures. It might sound strange, but in that instant it felt as if this was the end of the world as we know it. The day turned to darkness, nothing actually happened. 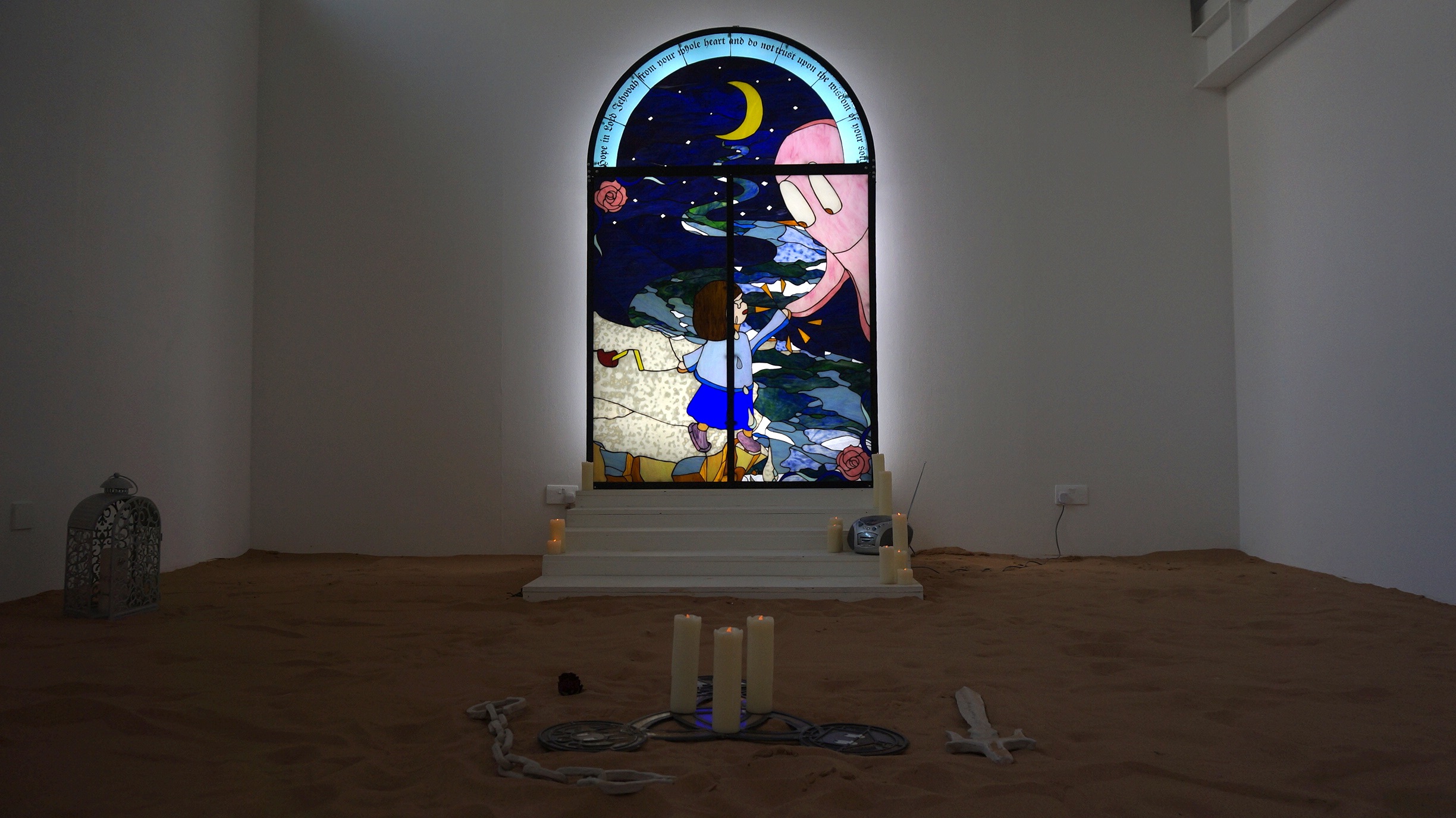 For Chinese-born, London-based artist Yorkson (born Yimin Chen, 1992), the end of the world is the starting point for creative work. Fusing together performance, video, installation, sound and sculpture, Yorkson’s practice pieces together the broken shards of contemporary subjectivity into a new form of self-portraiture and apocalyptic storytelling. It’s fitting, really, given the state of our planet right now.

“I think the apocalypse is basically the global political situation right now,” Yorkson tells me when we meet at her favourite cafe, The Delaunay Counter in London’s Aldwych. “It feels really hopeless,” And it’s hard to argue with her. From the election of Trump and impending nuclear war, to spiralling natural disasters and environmental catastrophe, the apocalypse does feel like an all too regularly recurring theme. And yet the world continues, as if doomsday has become the new normal.

Yorkson describes her sadness at the recent death of the theorist Mark Fisher and “the spread of depression across our generation.” She has a point: it feels like everyone I know is finding it hard to live at the moment. I ask if she believes this is a generational outlook. 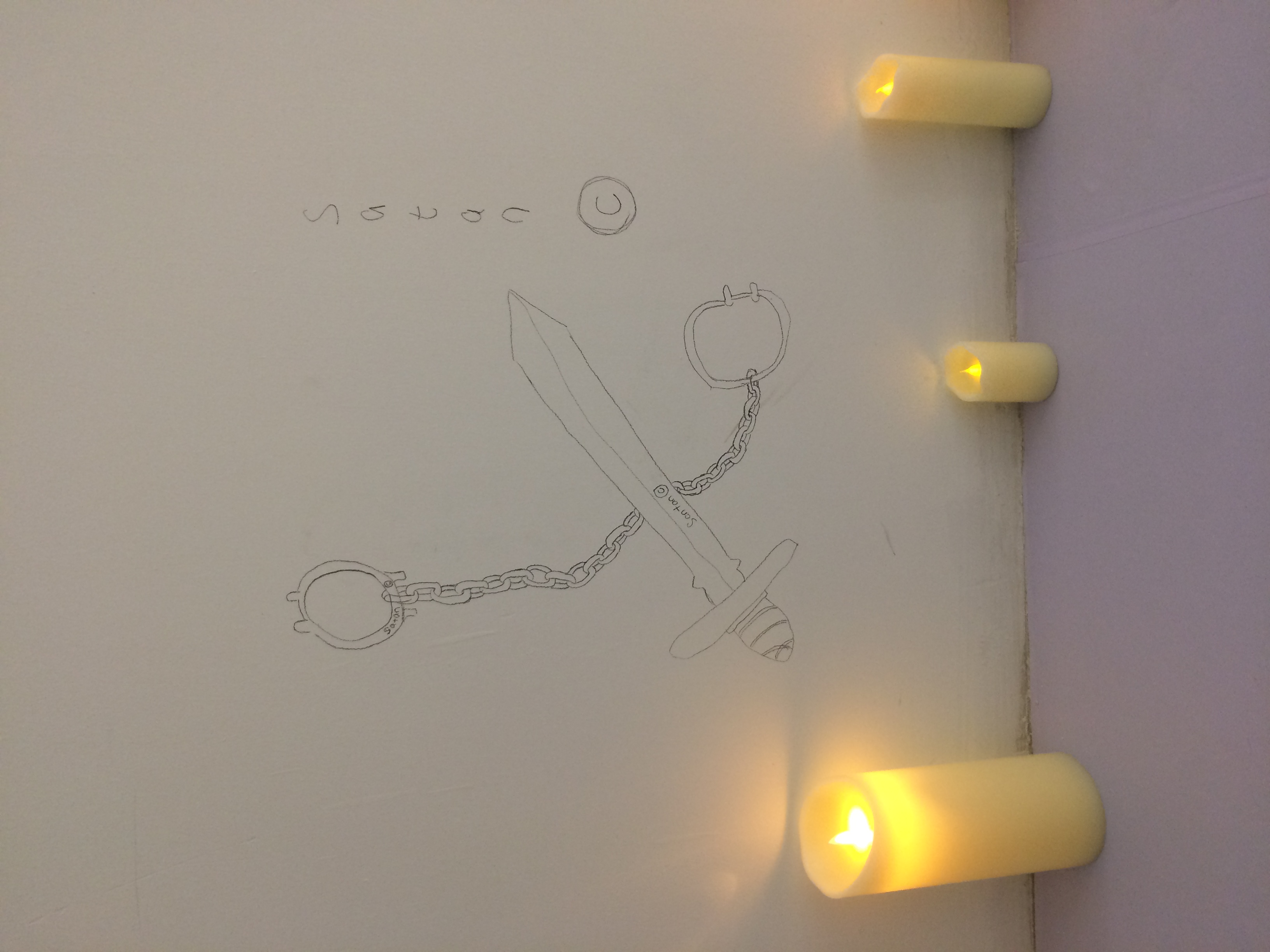 “I was born in the aftermath of 1989, Yorkson says, taking a bite on a chocolate eclair. “The year which saw the start of the post-Cold War period and the emergence of the World Wide Web. Growing up, I witnessed the radical changes which the millennium brought – from the mass geopolitical violence of the “war on terror” in the wake of 9/11, to the exponential acceleration of technology and media proliferation, violence became more and more visible and normal.”

We talk about the global market in anti-depression drugs, and the recent uptake of “mindfulness” as two among many coping strategies sold to us as a means of dealing with the experiences Yorkson is describing. And what about art, can it offer a more meaningful response to these problems? “I see it as a kind of shelter for myself,” Yorkson says, “to ease the pain of the current political situation, and the ways that intersects with my own situation – my race, my immigration status, my gender. I create my own world in my work, and in that world those issues are not issues anymore.”

I think back to Yorkson’s recent performance at London’s ICA for ASP3, in which she wandered the stage in a fairytale nightdress, singing childlike nursery songs in-between aggressive segments of harsh noise. It looked painful for her. “The things I’m sheltering from, they always creep in, but maybe that can communicate how far away we’ve got from happiness.”

In the gap in conversation that follows, Yorkson pulls a small candyfloss pink, blob-like plushy toy from her bag and sits it on the table between us – “this is my dear friend Barba”, she states, as calmly as if she was introducing me to a real live person. Barba – full name Barbapapa, I learn – is a central character in the world created by Yorkson, a fictional creature who began his life as the star of a 1970’s children’s book and TV series of the same name, and who now appears, in a range of forms, as a character and friend to Yorkson across both her artwork and her Instagram feed @100_percent_sad.

In the original children’s story, Barba mysteriously find himself on earth and befriends some kids who set out to help him fit in. But upon introduction to members of the community, Barba is promptly captured and imprisoned as an attraction at the local zoo, where he is pictured alone in his cage in the rain, crying.

The twist, however, is revealed when Barba realises that he can shapeshift at will into any form imaginable. After escaping his cage he proceeds to use his powers to transform, from fire engine to taxi to lifeboat, saving people’s lives and helping those in need. By his good deeds Barba finally wins over the people, who come to recognise his difference no longer as a threat but as a valuable asset, thereby granting him the status and freedom of subject and citizen among equals. 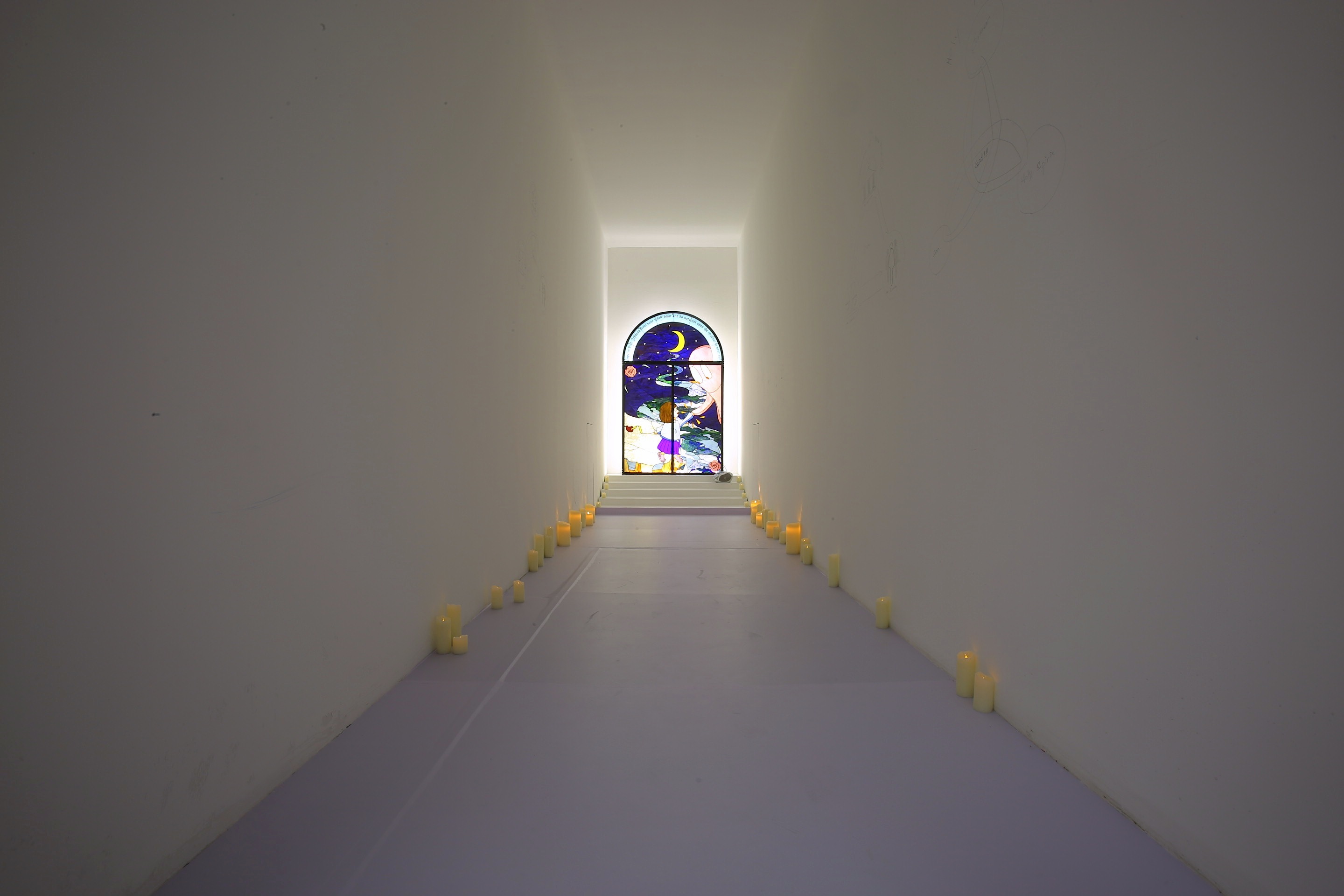 I ask Yorkson about Barba and she describes him as a way to rediscover how she looked after her toy. “These were my friends when I was a child: [they provided] those heartwarming feelings which I haven’t felt since I grew up”. Nostalgia then, for a return to the sheltered innocence of childhood? “That’s something people always talk about in my work – I think that this idea of a lost world, what came before this constant apocalypse we seem to be living through, informs a lot of my practice.”

But just as harsh noise seeped into her carefully constructed world of make-believe song, even Barba can’t completely escape the violence of the world outside. In an Instagram post from January 13th, captioned “when I went home today…”, the back of a small Barbapapa, slightly out of focus, is seen hanging in an apparently successful suicide attempt from the light fixture of a dark bedroom, his makeshift noose a pair of handcuffs.

Granted freedom on the condition that he is useful to the humans in the Barbapapa universe, Yorkson’s redeployment of the story of Barba can’t but then serve as both a parody and a critique of the reduction of human value to the terms of mere productivity. Our worth only the profit we produce.

Describing her recent work, Dear Job: Leave God Alone, Yorkson says: “I try to navigate the violence that seems inherent to both religion and government, and transform this set-up into a visual elegy, a kind of mourning for the loss of a different world to the one we are currently living in.” In the work in question, a huge stained glass window sits in the centre of desolate sandy landscape, on it the image of a huge smiling Barba beckoning a small crying child towards a sheer cliff edge. As their hands touch and the child’s foot slips over the precipice, sparks of energetic yellow light burst into the glass.

Today, we face an ultimatum, between the ongoing apocalypse or a new and different life. Yorkson’s work forces us to decide: catch the hand of Barba – use our imaginations to bring about a different world – or fall to our deaths. I know which I’ll be picking.

Linkedin
RELATED ARTICLES
OTHER ARTICLES
Following the release of his debut single, Deyaz talks battling addiction, dealing with his struggles through music, and building a budding music career from his living room.
A new exhibitions brings together the work of photographers who documented the deep unrest of these pivotal decades.
After building his reputation covering the US civil rights movement in the 1960s, the photographer went on to produce some of the most enduring images of the past century.
A new podcast is opening up the conversation between trans women and trans amorous men in the hope of building coalitions.
A recent High Court ruling against the right to wild camp in Dartmoor National Park sparked the largest land protest in history – and campaigners say their fight is not over yet.
Filmmaker Laura Poitras discusses her new documentary which traces the remarkable life of the artist-activist and the impact of her battle against the US opioid crisis.