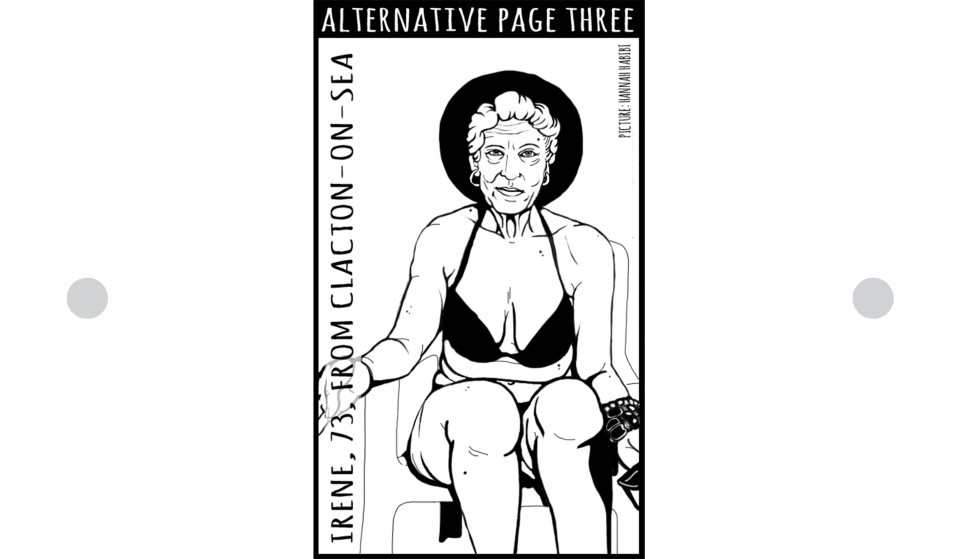 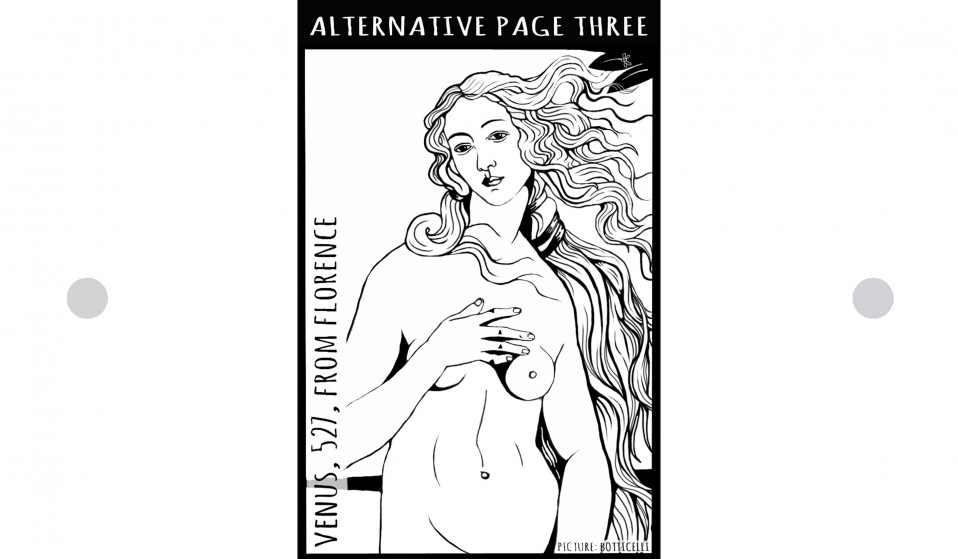 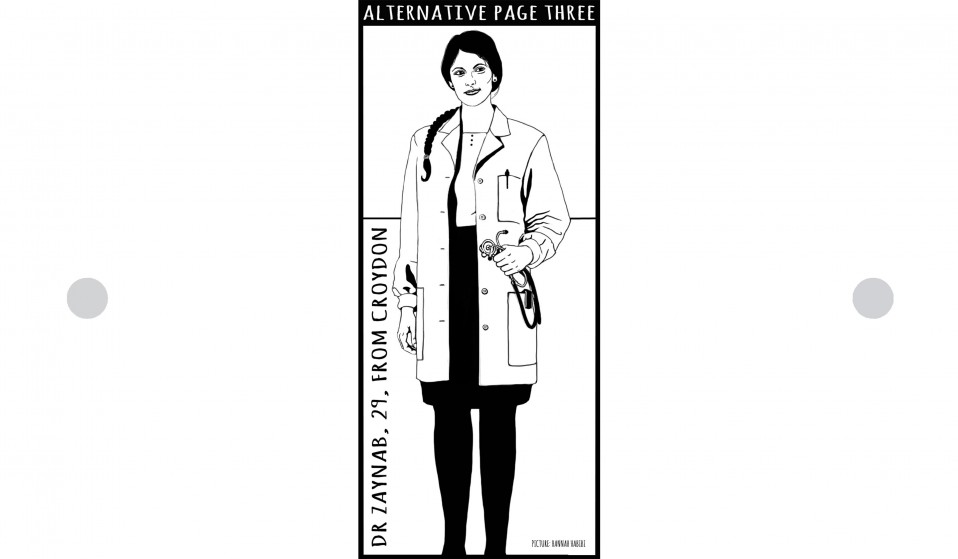 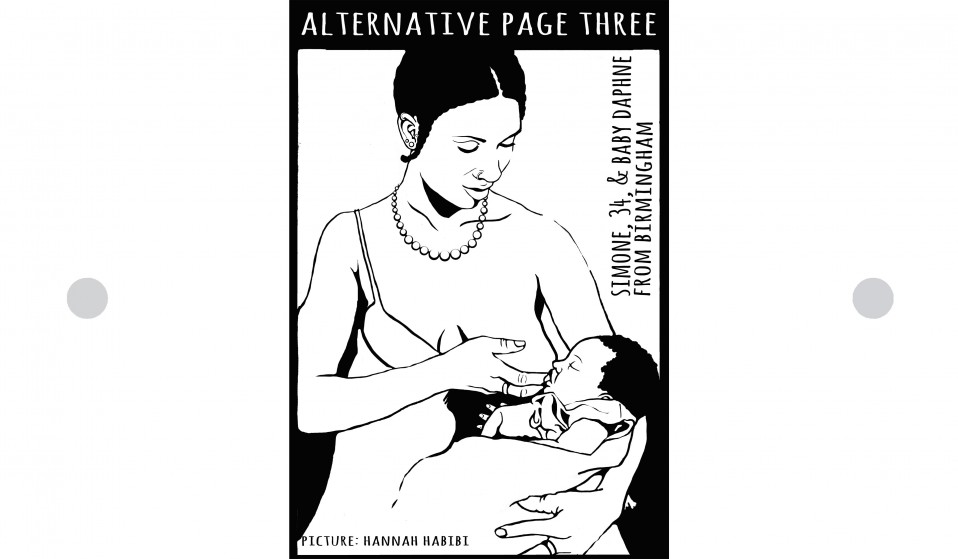 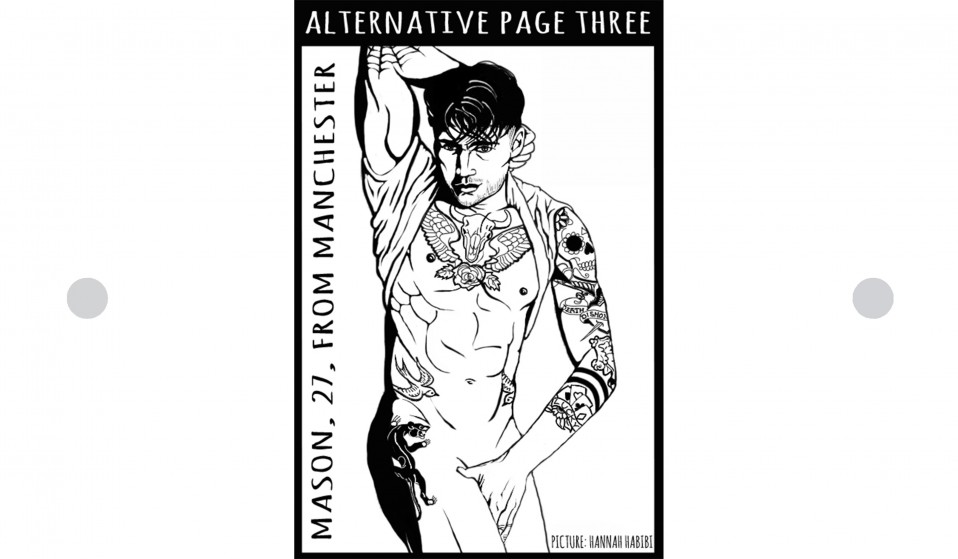 Page 3 belongs to another era. Gone are the days when men in smoke-filled rooms ran the show and having to flick past a pair of airbrushed tits was an accepted part of informing yourself about current affairs. London-based artist Hannah Habibi has challenged this outdated, sexist institution by sketching out her alternative vision for Page 3 in a series of illustrations for OOMK zine.

“Anti-Page 3 campaigners are often accused of being prudish and not wanting to see nudity or breasts because they’re offended,” Hannah explains. “I wanted to look at in a more humorous way because I’m not offended by nudity and I’m not a prude and I’m not old fashioned. I don’t feel it’s the appropriate place for it, but if you want to say, ‘nudity is OK in the newspaper’, then why not have various types of nudity? Why not have breastfeeding women or nude men or older women?”

She looked beyond the identikit twenty-something blondes featured in The Sun and The Daily Star to sketch out a broader and more honest picture of women today, including a female doctor, a breastfeeding mother and a granny in a bikini.

Hannah converted to Islam aged 24 and explained the project was also about challenging one-dimensional portrayals of Muslim women. “In western media there has been an almost fetishised obsession with Muslim women as victims and oppressed or having no agency in their own lives,” she says. “Because of the really reductive stereotypes that abound, people sometimes struggle to understand that wearing the hijab is my choice. I would champion someone wanting to wear a mini-skirt or a niqab, because upholding people’s ability to choose and make their own decisions about the way they present themselves to the world is the most important.”

Hannah’s artistic action is part of a growing grassroots movement of young women (and men) who are increasingly prepared to counteract sexist and disempowering media representations of women with their own new visions of female identity. “We’re bombarded with images of young female bodies in the media, advertising and even on Instagram,” Hannah explains. “It’s got to a saturation point where we can’t really stand this anymore, it’s unbearable. We live in a society where women’s opportunities are higher than they ever have been in the past. We have the power to make changes in the real world and not just be valued for our physical appearance, so women are standing up and saying, ‘Yeah, let’s do something about this.’”

Check out Hannah Habibi’s work or get involved with the No More Page 3 campaign.

Linkedin
RELATED ARTICLES
OTHER ARTICLES
Theo McInnes’s photos of the annual event provide an intriguing snapshot of contemporary Britain.
Filmmaker Laura Poitras discusses her new documentary which traces the remarkable life of the artist-activist and the impact of her battle against the US opioid crisis.
Photographer Becky Tyrell went down to the fading banger and stock raceway to meet a community desperate to keep it alive.
A new law change is enabling Britain’s donor-conceived children to know the truth about their origins – but campaigners say the fertility industry must do more to protect people.
At his West Bank restaurant, Fadi Kattan established himself as the voice of modern Palestinian cuisine. Now, he’s bringing his innovative, bold flavours to the UK’s capital.
Following the release of his debut single, Deyaz talks battling addiction, dealing with his struggles through music, and building a budding music career from his living room.