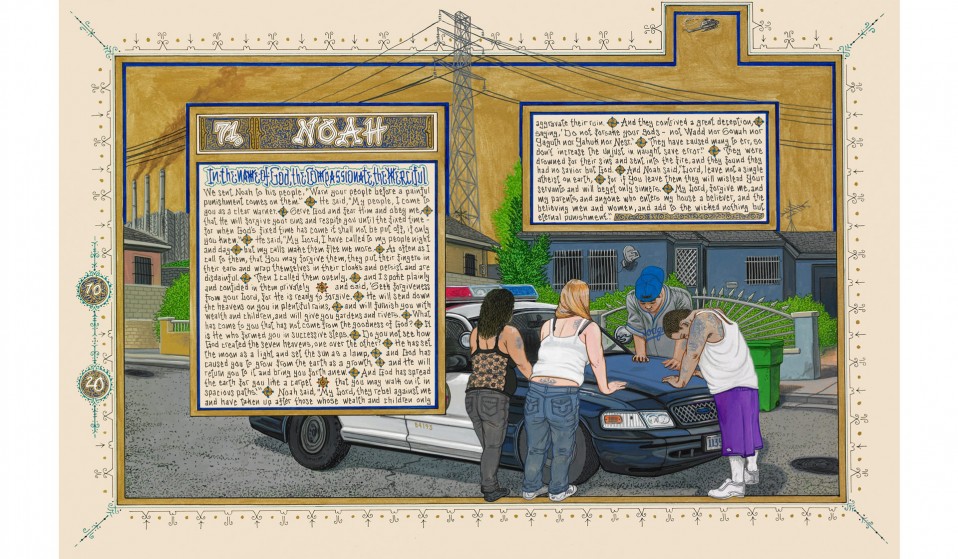 “Everyone should go and read the Qur’an,” states artist Sandow Birk. “No matter what you think about anything, the Qur’an has been the most important book on planet Earth in recent decades, by far – for a host of reasons, good and bad. I think it’s shameful for educated, politically engaged human beings to have no idea what it says inside the most important book in the world.” Los Angeles-based artist Sandow Birk’s American Qur’an is a monumental project, nine years in the making, which translated Islam’s holy text into English and illustrated every verse with scenes from modern America. It’s Sandow’s most important project yet, but extends a practice he’s been developing throughout his career: drawing on historical paintings and references to update them with a burning social critique of the present. 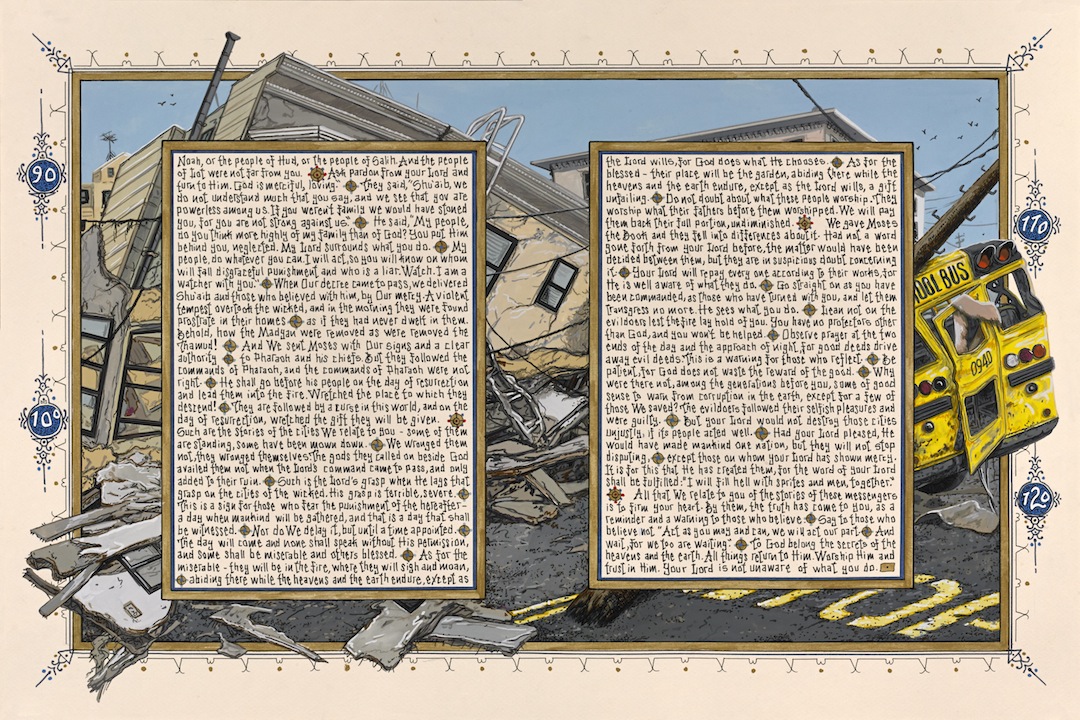 Whether he’s bringing together Caravaggio and the Crips to comment on the ’92 LA riots, updating 17th century etchings to highlight the disasters of the Iraq war, or subverting American social realist paintings and military propaganda posters for a fictional Californian civil war, Sandow’s work is always provocatively satirical and reveals his profound political insights. Chasing better swell than he could find at the local surf break near his Southern California home was the spark which developed his hunger for travel, which led to seeking adventure on the beaches and bars of Mexico as a teenager before embarking on a land-based journey from California through Mexico and Central America to Rio de Janeiro in Brazil. Sandow then crossed the Atlantic to study at the Parsons Institute of Art in Paris, where he acquired his expansive knowledge of art history and further developed his well-travelled perspective on the world. 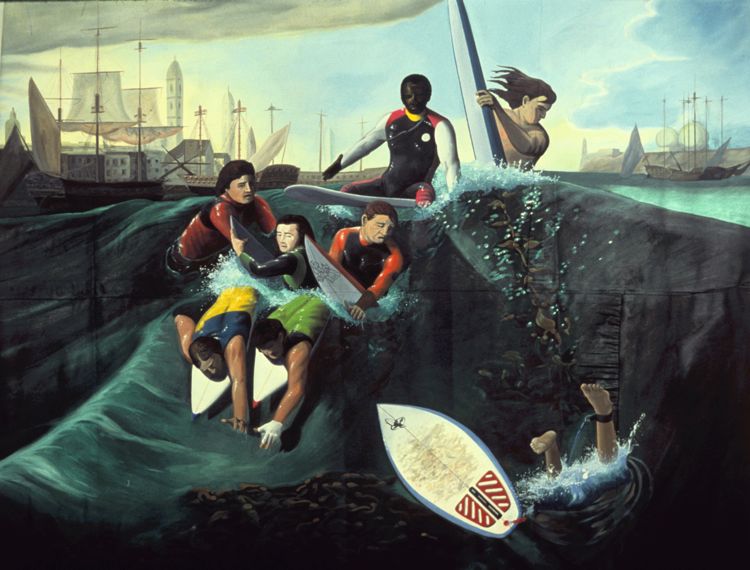 “Aggro Crowd at Lower Trestles (Watson and the Shark)”

Back in Los Angeles after graduating, he began fusing his classical inspirations with his contemporary experience, painting surfers and breaking waves into updated versions of medieval seafaring paintings, to place surfing in to the history of the ocean and maritime exploration. But seeing rising violence in his neighbourhood and elsewhere in LA during the late ‘80s and early ‘90s; drive-bys, the rise of the Bloods and the Crips, the crack epidemic and ultimately the ’92 LA Riots, the worst riots in American history, pushed his work in a far more political direction. “The romanticisation of death and violence in historic paintings, French romanticism or early American colonial paintings, for example, seemed to parallel what was going on in hip hop and gangster rap,” Sandow reflects. “I began just spoofing the glorification of violence and making fun of romantic history painting. But I came to see I was living in monumental times, so I started doing real history paintings, painting what was actually happening all around me.” 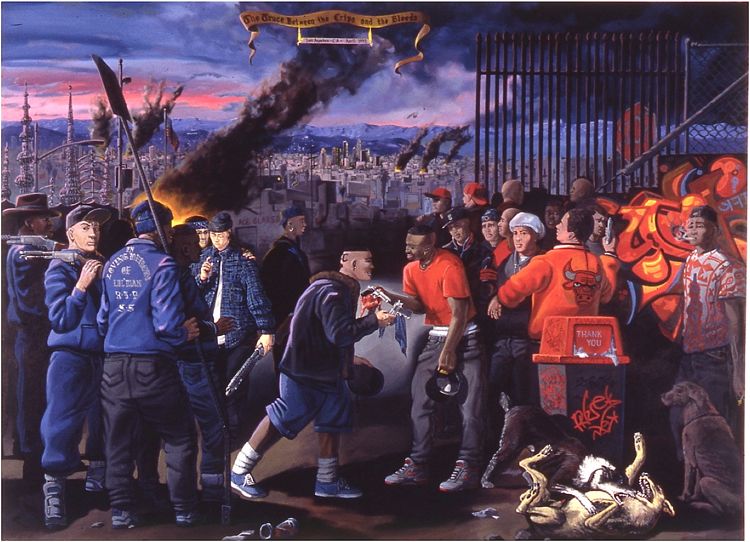 “The Truce between the Crips and the Bloods” 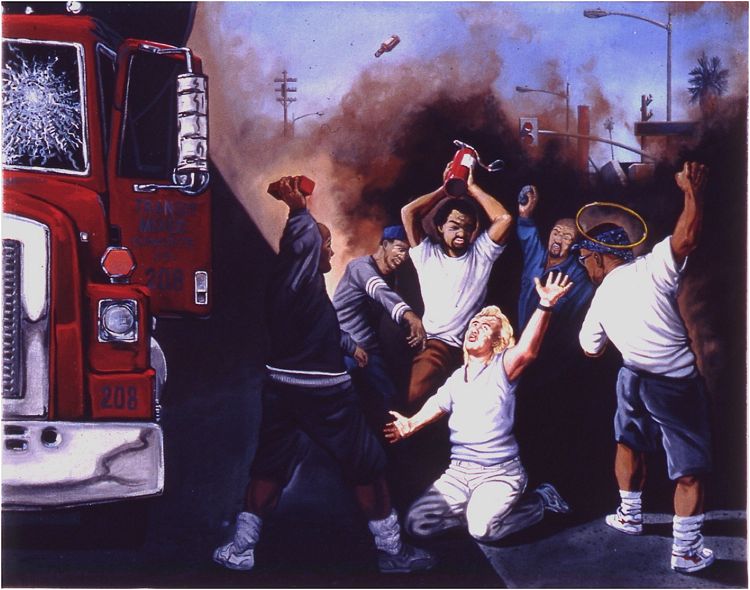 “The Bashing of Reginald O. Denny”

He imagined the short-lived truce between the Crips and the Bloods that occurred during the riots and painted the beating of Reginald Denny, capturing the controversy around the trial of the four men who beat him, whom some argued should have been let off, like the cops who beat Rodney King and whose acquittal sparked the riots. “I’m a political person and I think about politics all the time,” Sandow explains. “To me it seems the natural way of working is to do paintings about what I’m thinking about or obsessed about. All my work has my opinions in it, I just say what I think, be damned.” It was a series of 17th Century etchings by French artist Jacques Callot that provided Sandow with a starting point to explore the tragedy of the US invasion of Iraq in 2003. Callot’s The Depravities of War is a series of 15 large scale woodblock prints of the European Thirty Years’ War, which depicted the destruction and suffering unleashed on civilians by war for the first time. Sandow created his own series of huge woodblock prints at Hui No‘eau Visual Arts Center in Hawaii. They chronicle the disastrous conflict, from the burning desert oil fields of the invasion to the Iraqi civil war it sparked, the ham-fisted American counter-insurgency campaign and detainee abuse in prisons like Abu Ghraib. 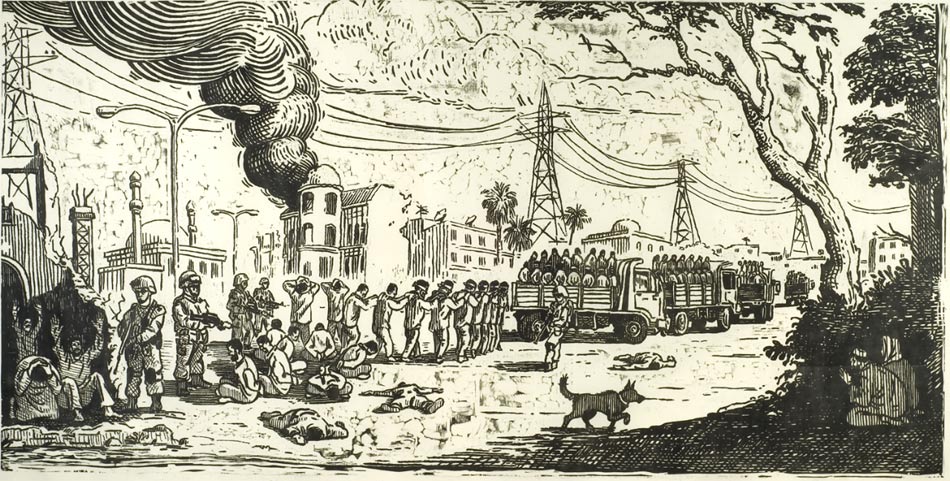 From “The Depravities of War” series

After 9/11, Sandow began to notice the growing disparity between the caricatured and fear-mongering portrayal of Islam in the media and his own positive experiences of the Islamic world – surfing in Indonesia and the Philippines or exploring the souks of Morocco, for example. “I must have been to over ten Muslim countries and the way Islam was being presented was nothing like the experiences I’ve had in these countries,” he explains. “There’s this big ignorance about Islam in America, when you say ‘Islam,’ all people can picture is the Middle East, deserts, camels, people with turbans. The vast majority of Muslims live outside the Middle East, with over 60% living in Asia-Pacific, often in fantastic, progressive, cosmopolitan places, like Kuala Lumpur and Singapore – not all in the backroads of Afghanistan. There are a lot of political problems in the Middle East, but to say what is happening in this one tiny corner of the world is representative of the second biggest religion is just erroneous.” 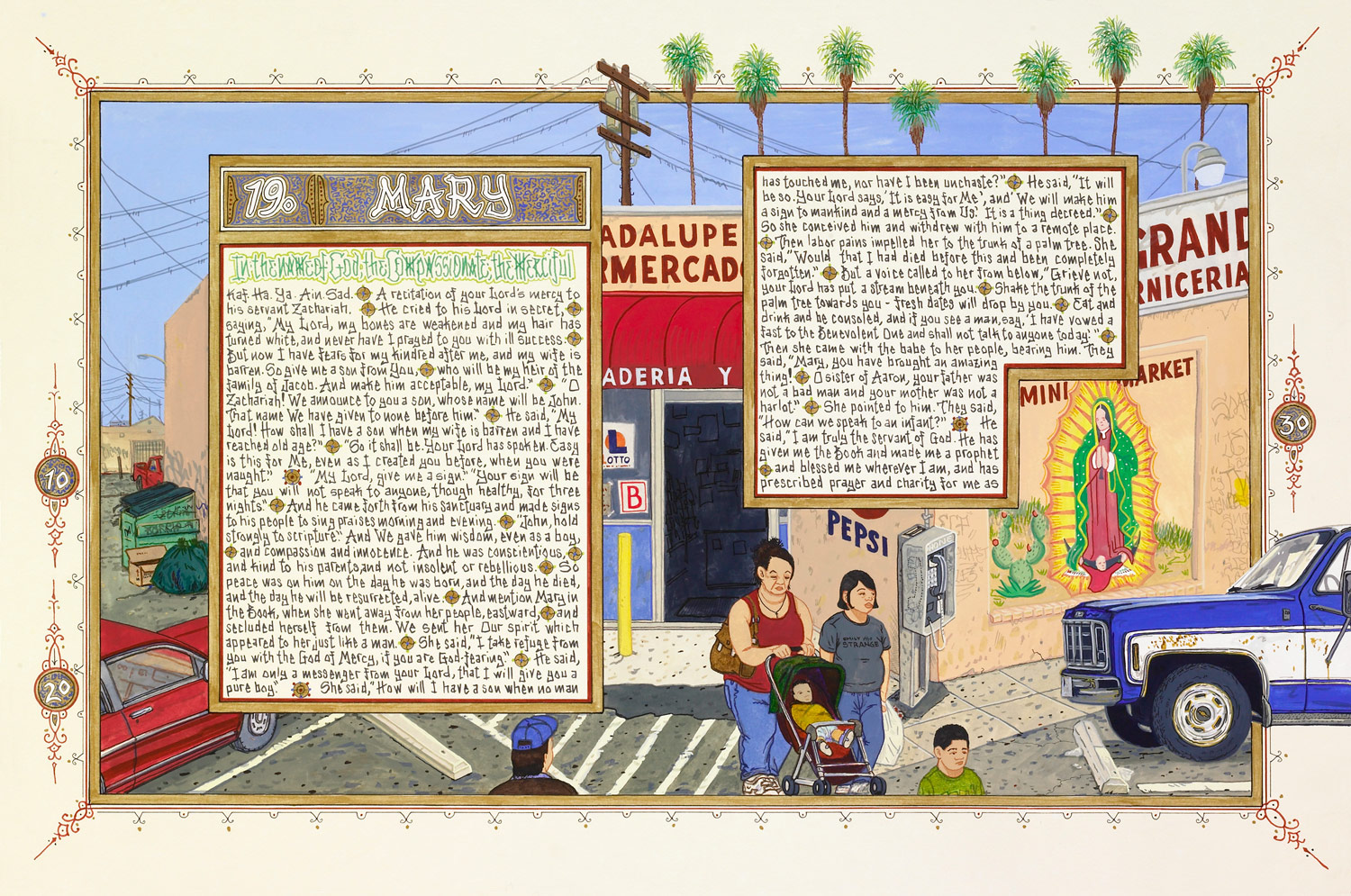 After years of hearing that Islam was an evil religion, fundamentally at odds with western civilisation, finally Sandow had had enough. “One day I said, I’m sick of listening to this, I’m not going to be told what Islam is, I’m going to find out for myself,” he remembers. “I forgot everything I had heard about Islam. I took the Qur’an for exactly what it says it is: a message from God coming down from the sky to all human beings in the world – take the message for what you will. I began thinking what does the Qur’an’s message mean to me as a person living in California in the 21st Century?” Sandow has spent the last decade reading the Qur’an, and travelling throughout the Islamic world to study Islam and the production of Qur’ans. Producing his own version was an early idea, but it wasn’t until he saw the mistakes and corrections in the handmade Qur’ans at the Chester Beatty Library in Dublin, one of the finest collections of hand-illuminated Qur’ans in the world, that he felt up to the task. 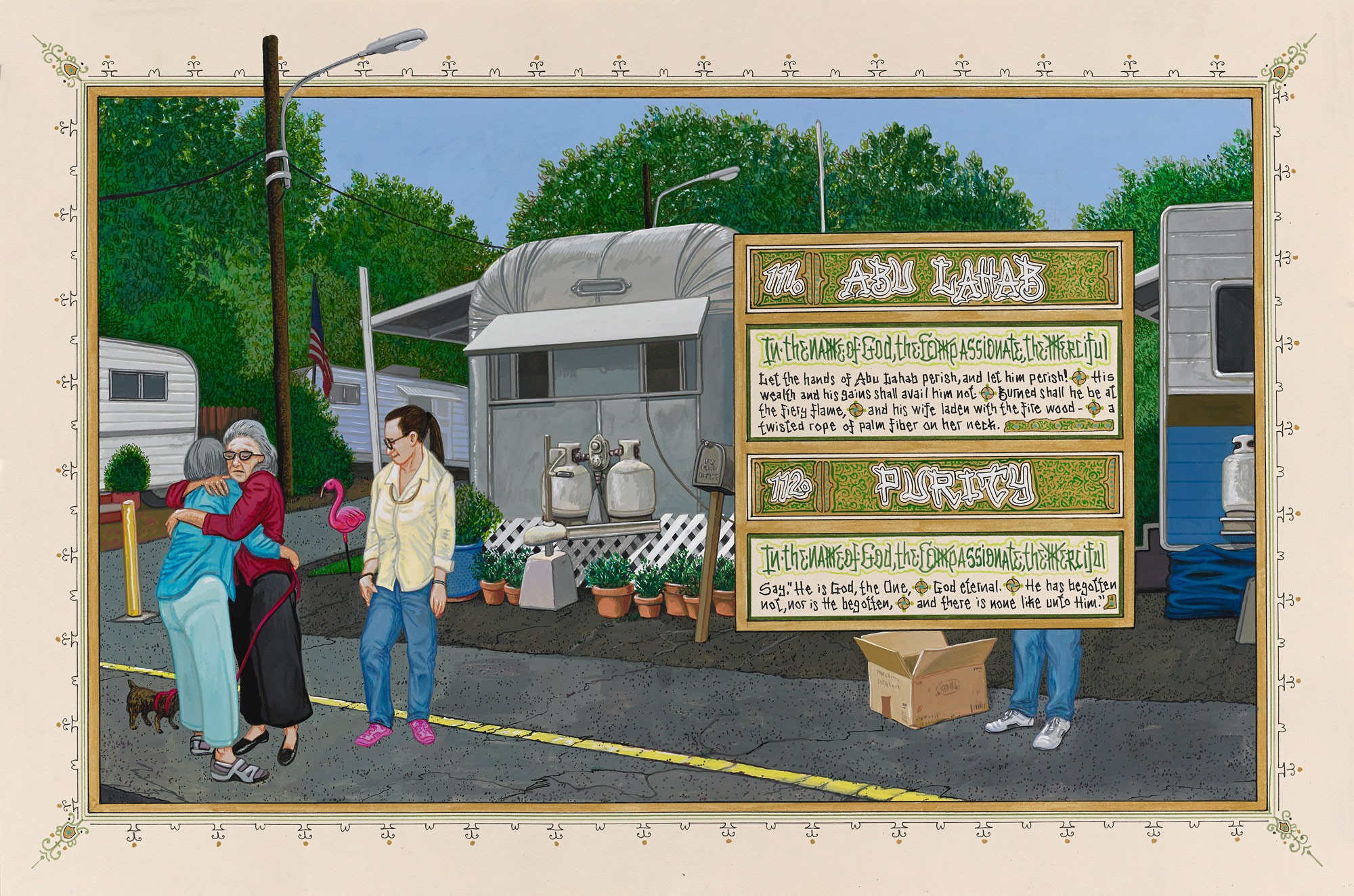 Flash forward nine years and the astounding American Qur’an project was finally completed in 2015, before touring the world as an exhibition. Sandow has hand-lettered and hand-illustrated all 114 chapters, or suras, that comprise the Holy Qur’an, representing Noah and the Great Flood as Hurricane Katrina, Judgement Day as people being arrested by the LAPD and Jacob’s wanderings in the desert represented as two Mexicans sneaking into the US, attempting to evade Border Patrol. Sandow’s interpretation of the Qur’an has been embraced most positively by young American Muslims. “When I talk about the project they often come up to me and say, ‘I grew up my whole life skateboarding and being Muslim, but I always felt like an outsider. Suddenly here’s this book: it’s my life, my daily activities and my religion all in one thing,’” he explains. 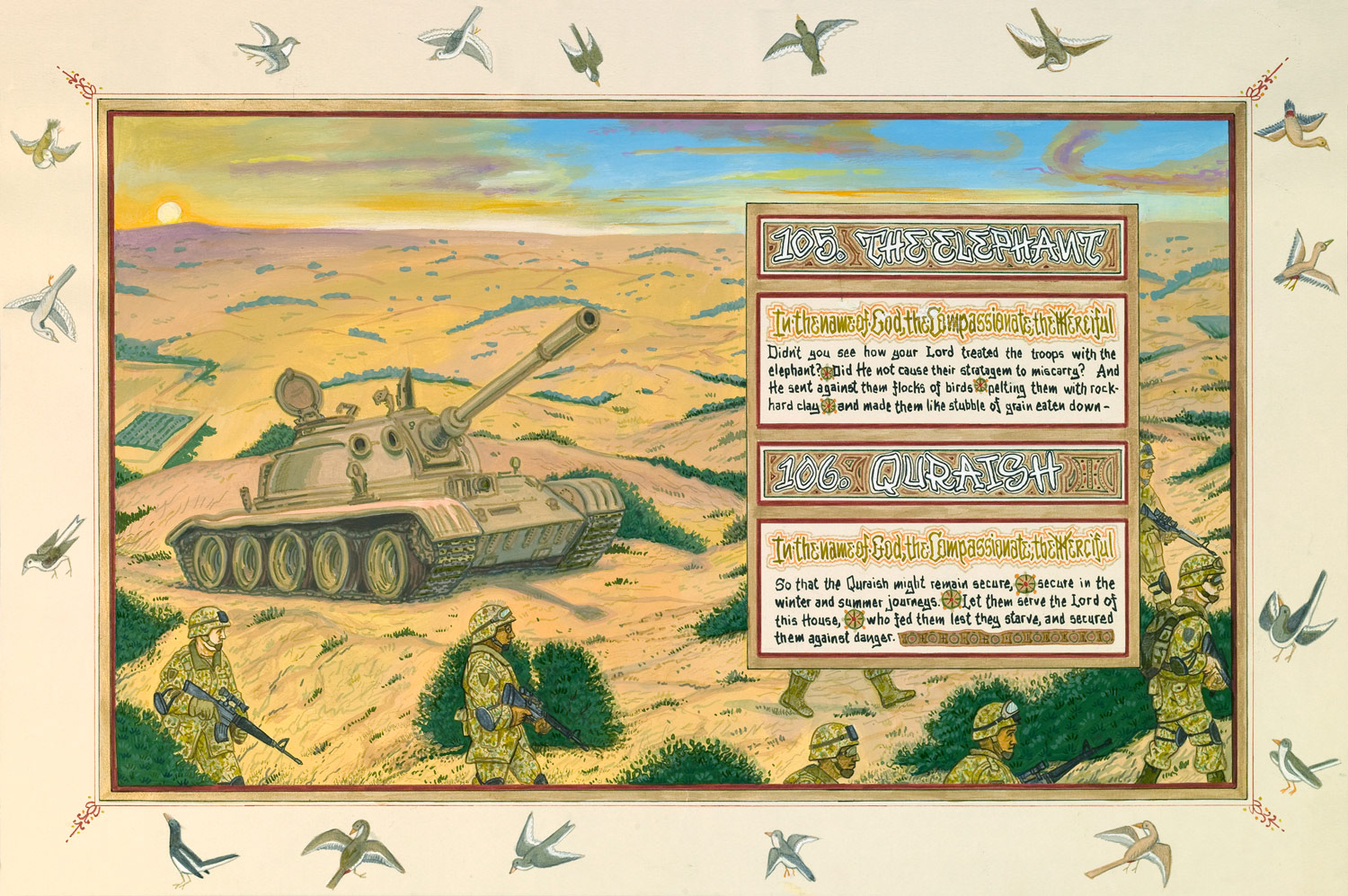 In the decade since he embarked on the project, hoping to encourage a greater understanding of Islam, hostility towards Muslims has only increased. Today, Donald Trump is exploiting rising tensions to whip up Islamophobia to new levels and dissenting voices like Sandow, who is pushing for respect and dialogue are, sadly, all too rare. “When I showed the first part of this project around nine years ago, people said, ‘Oh it’s so timely,’” he reflects. “Now a decade has gone by and people say, ‘Oh it’s so timely.’ It’s sad that it is constantly timely…”

Huck caught up with Sandow at Sagres Surf Culture, Portugal.

Linkedin
RELATED ARTICLES
OTHER ARTICLES
As the Criminal Bar Association enters its fifth week of action, criminal barrister Russel Fraser explains why the legal professionals have walked out and how action is likely to escalate.
Following the release of his latest album, the rapper talks about finding a new approach to songwriting, attitudes to poverty, and why his music is more than a political statement.
Protestors gathered outside Downing Street following the latest atrocities committed by Israel against Palestinians living in the besieged strip.
A sharp increase in officers armed with the electrical weapon is resulting in serious injuries and deaths.
Last week, Tower Hamlets council removed its nudity-restricting licensing conditions in a huge win for London’s kink community.
Photographer Bud Glick recounts documenting everyday life in the area, and what it taught him about the Chinese immigrant experience.