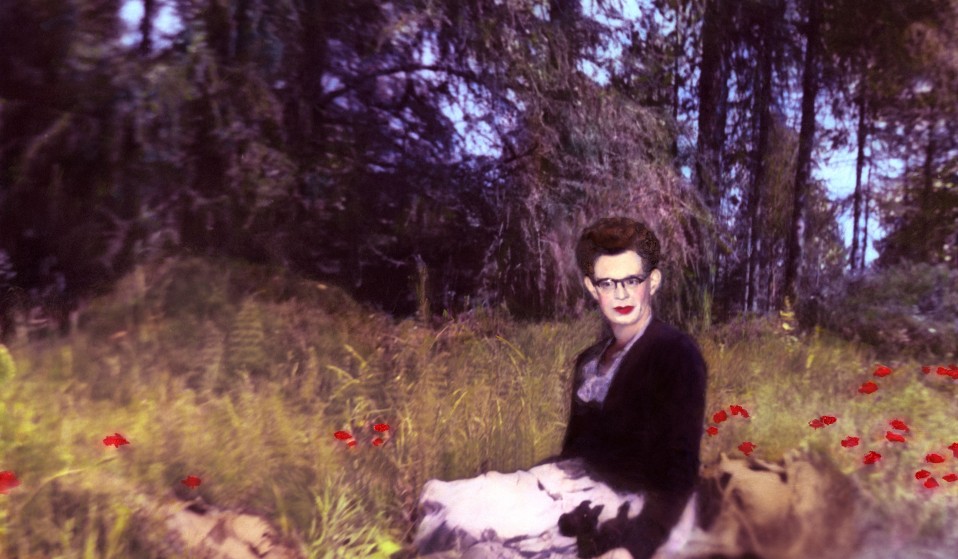 When Sara Davidmann discovered old documents that made it clear her uncle Ken was a transgender woman, she set out to explore and celebrate her life.

When Sara Davidmann discovered old documents that made it clear her uncle Ken was a transgender woman, she set out to explore and celebrate her life.

“In 2011 my mother moved into nursing home,” explains Sara Davidmann. “It was then that my bother, sister and I found in the garage of her house in Oxfordshire an archive that she’d pulled together of papers and letters about my uncle Ken.”

It’s not unusual to find unknown pockets of family history lurking in nooks and crannies of the homes of our elder generations, but with the words “to be destroyed” plastered so clearly on the contents, Sara was right to think something here was different.

“These documents made clear the fact that my uncle Ken had been transgender.” Sara had no idea during her uncle’s life, but since becoming aware has referred to her uncle as K, a mark of respect for the gender with which she identified. 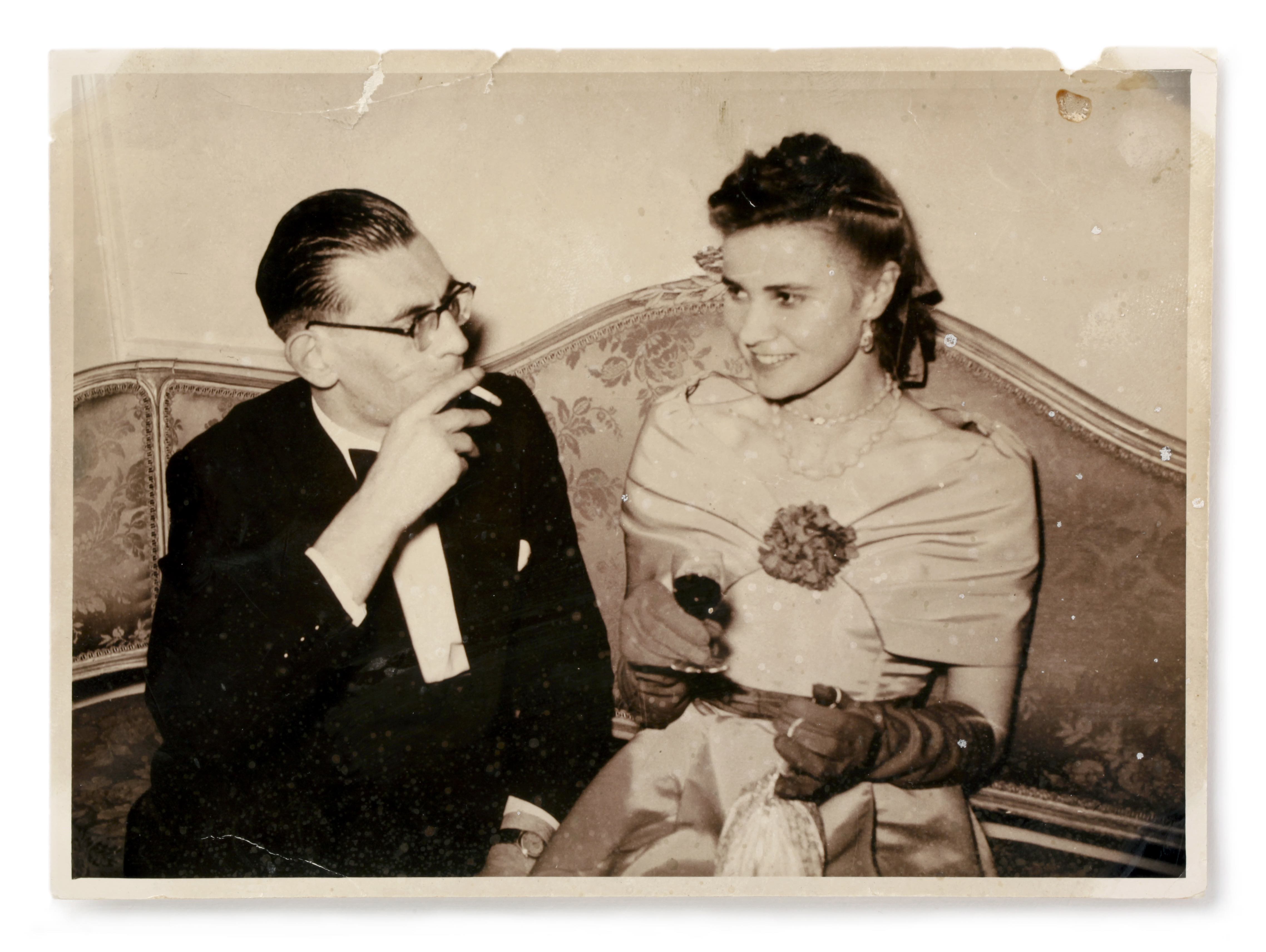 In Ken. To be destroyed, an exhibition that opens tonight at London College of Communication, Sara presents snapshots of the archive alongside photographs that celebrate, remember and explore K’s life. Sara is an artist, photographer, and Research Fellow in Photography at London College of Communication, and upon learning more about K has been passionate about sharing her story.

With so much of K’s life and character kept hidden for decades, Sara has worked on the surfaces of the photographs using ink, chalks, magic markers and correction fluid to bring them to life. In other works Sara tries to visualise how Ken might have looked as a woman: fictional photographs are made with digital negatives, hand colouring, darkroom chemicals and bleach.

“Part of what I’m doing with the work is not only making K’s female side visible,” says Sara, “but it’s also getting in touch with that person I never knew, which still pains me.”

Trans or third gender experiences might have been documented in cultures across human history, but it’s taken western societies centuries to become more accepting of trans people.

The word “transexual” wasn’t coined until 1949, the word “transgender” in the early 1970s, and there’s still a long way to go before prejudice and oppression are resigned to the history books. 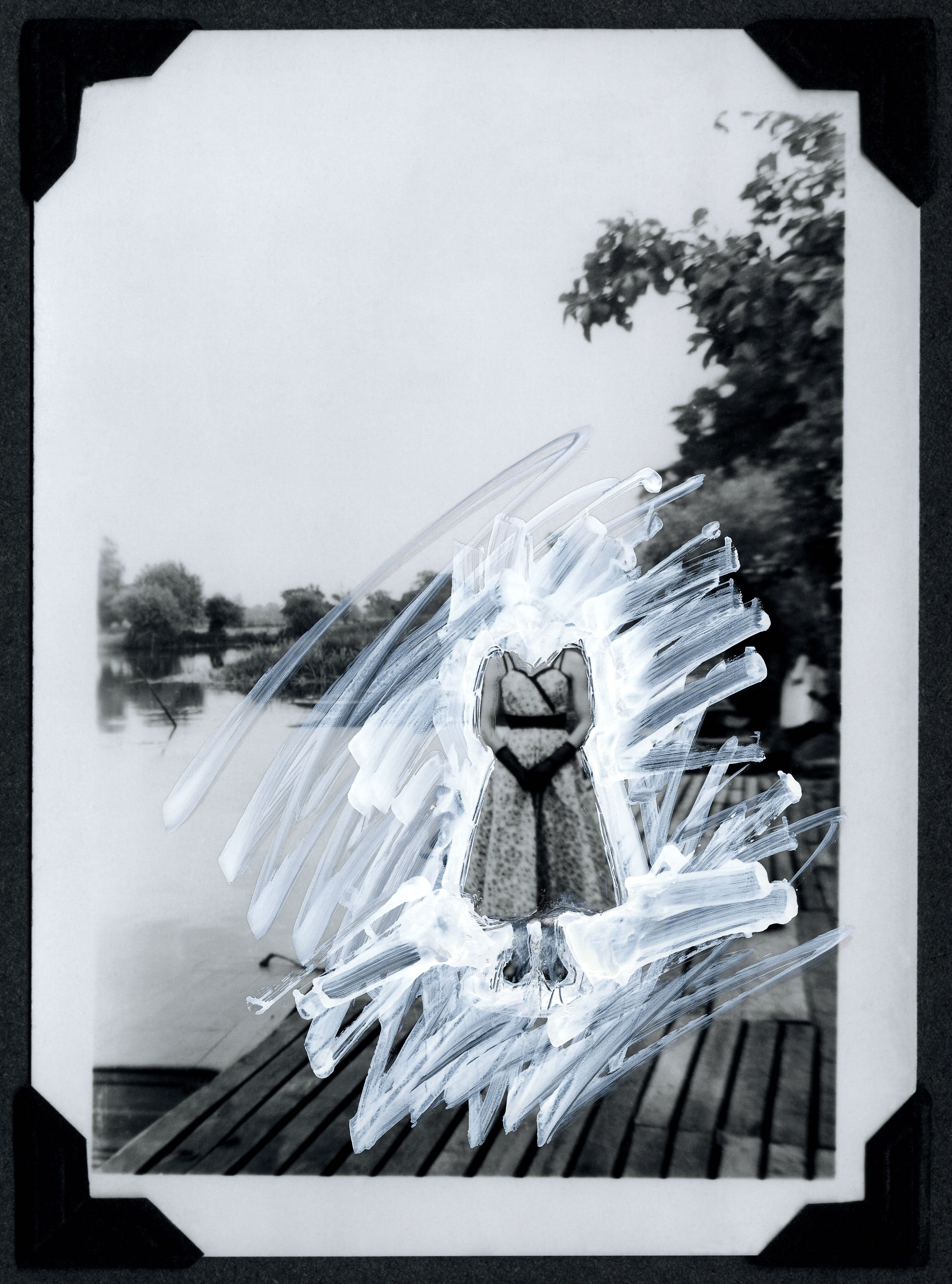 “It was first discovered that my uncle was transgender in 1958,” says Sara. “K had married my mother’s younger sister Hazel in 1954, and at that time K thought that she’d been able to hide her true gender identity.”

As a child in the 1920s, K always knew she was a woman. From a very young age she’d collected women’s clothing and hid it in a secret draw, basking in the freedom she found when her family was out the house. Under a vail of secrecy she was free to truly express herself. Otherwise she was forced to suppress it.

“Four years after marriage K realised that burying her identity would no longer be possible,” Sara explains. “K had to tell Hazel.”

The archive that Sara discovered gave her an insight into what happened next, as a young couple in love navigated what must have been an unexpected new chapter in their relationship. 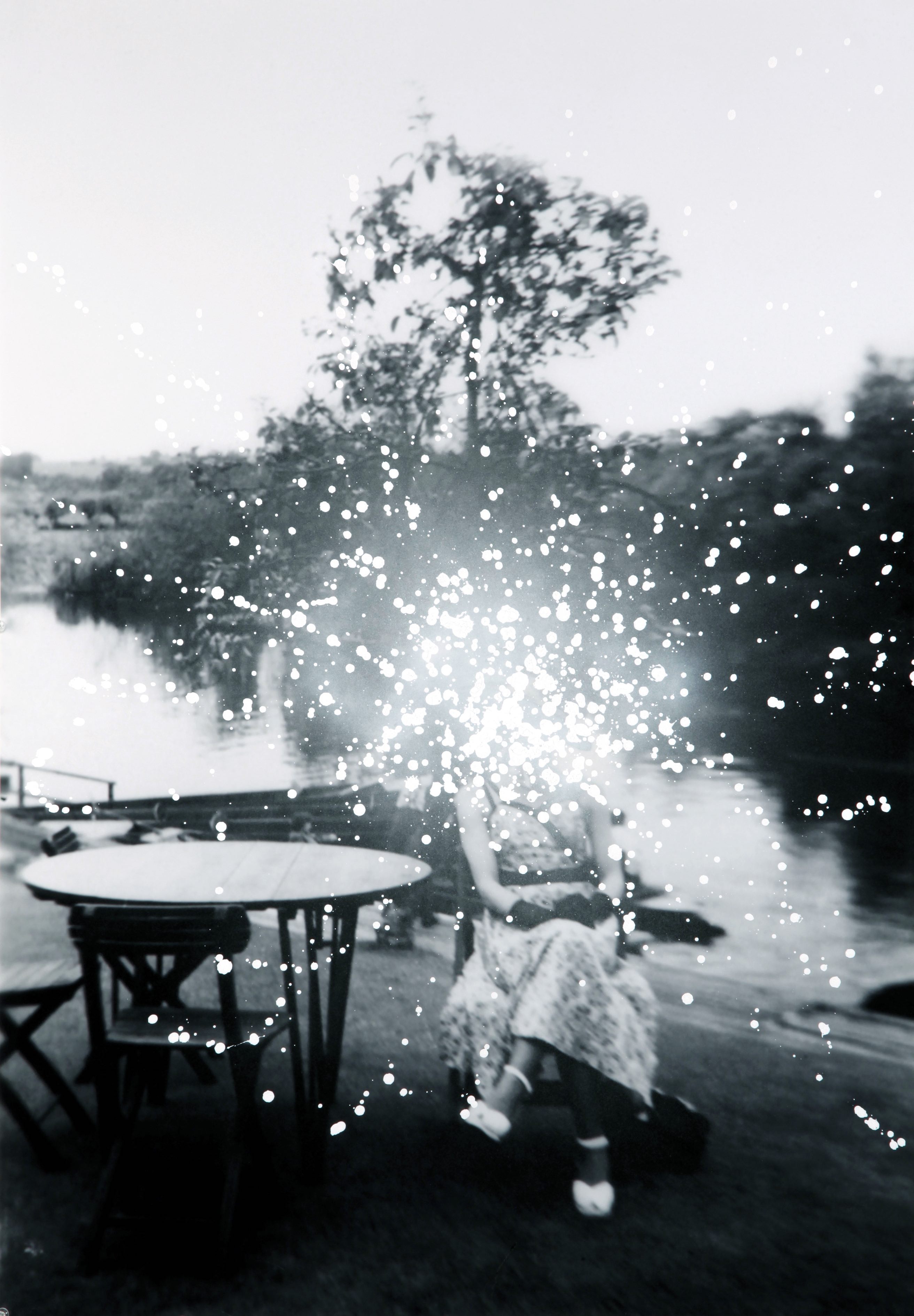 “By the early 1960s it seemed that Hazel had accepted K for who she truly was,” Sara continues. “In a letter she wrote to my mother Audrey, it’s clear that the news was shocking, but Hazel had come to accept it.” In public K continued to present as a man, but in the comfort of the home K was free to be a woman.

“One of the things I learnt from these letters was that K didn’t feel comfortable masquerading as a man. As time went on K withdrew socially.” For Sara and her siblings K was a figure rarely seen; while she and her parents had moved to London, Hazel and K remained in Edinburgh.

The archive itself isn’t just a rare insight into a trans persons life from a time when they were even more marginalised in our history, it tells the story of acceptance and love prevailing. K came out as trans, and her loving marriage with Hazel continued. 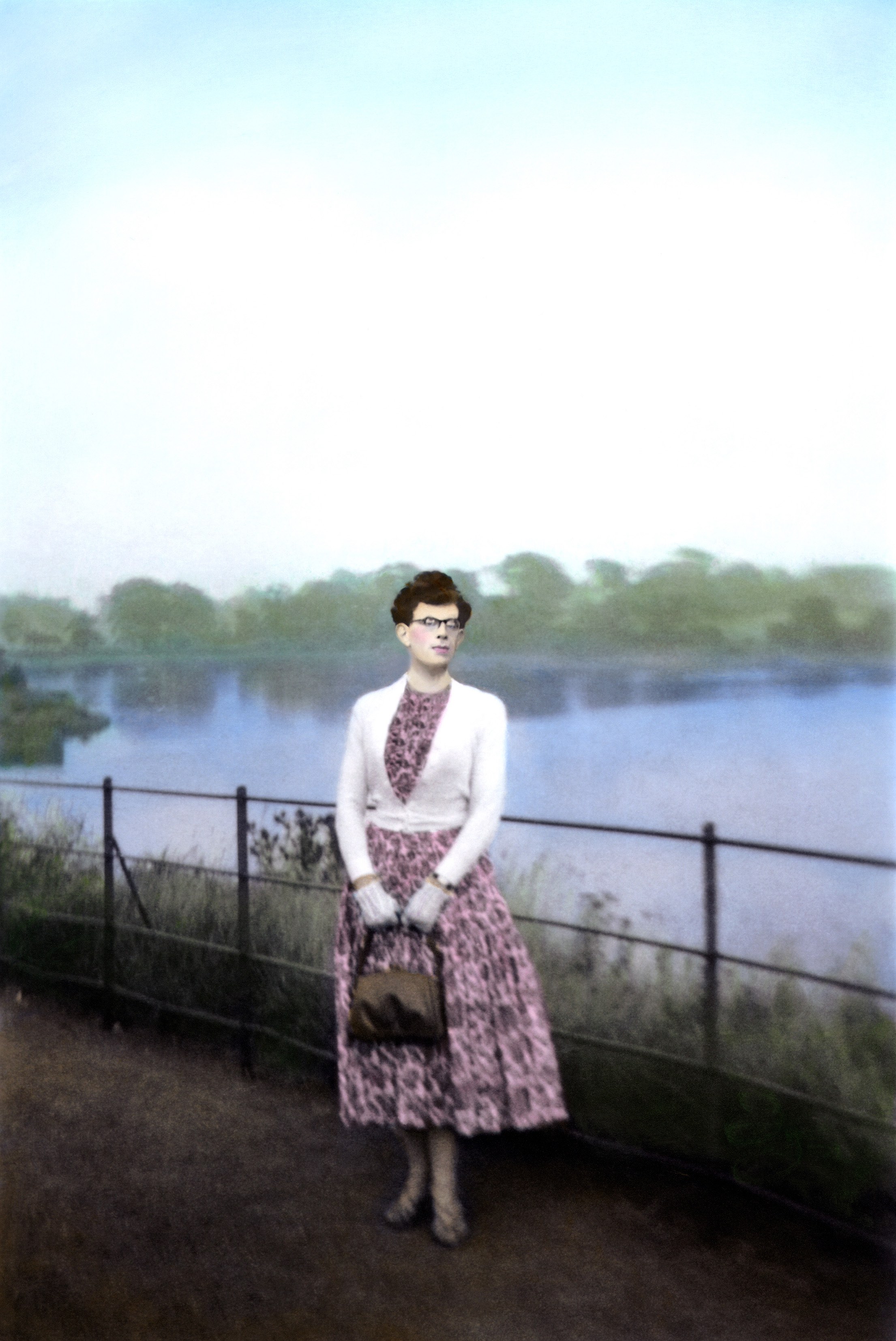 “It’s been very important to me, the fact they stayed together for the rest of their lives,” says Sara warmly. “My parents thought Hazel should leave K, with the best of intentions. I have a sound recording of my mother saying how much she liked K, there was no judgement at all, but what they thought was that the marriage wouldn’t last.”

Hazel however has other ideas. Two of the most pertinent letters see K explain how she wants more than anything to be buried alongside her wife, a sign of their commitment and adoration. “Then I discovered that is exactly what happened,” Sara tells me. “K died in 1979, Hazel died in 2003, and they now lie together in a graveyard in Edinburgh.” 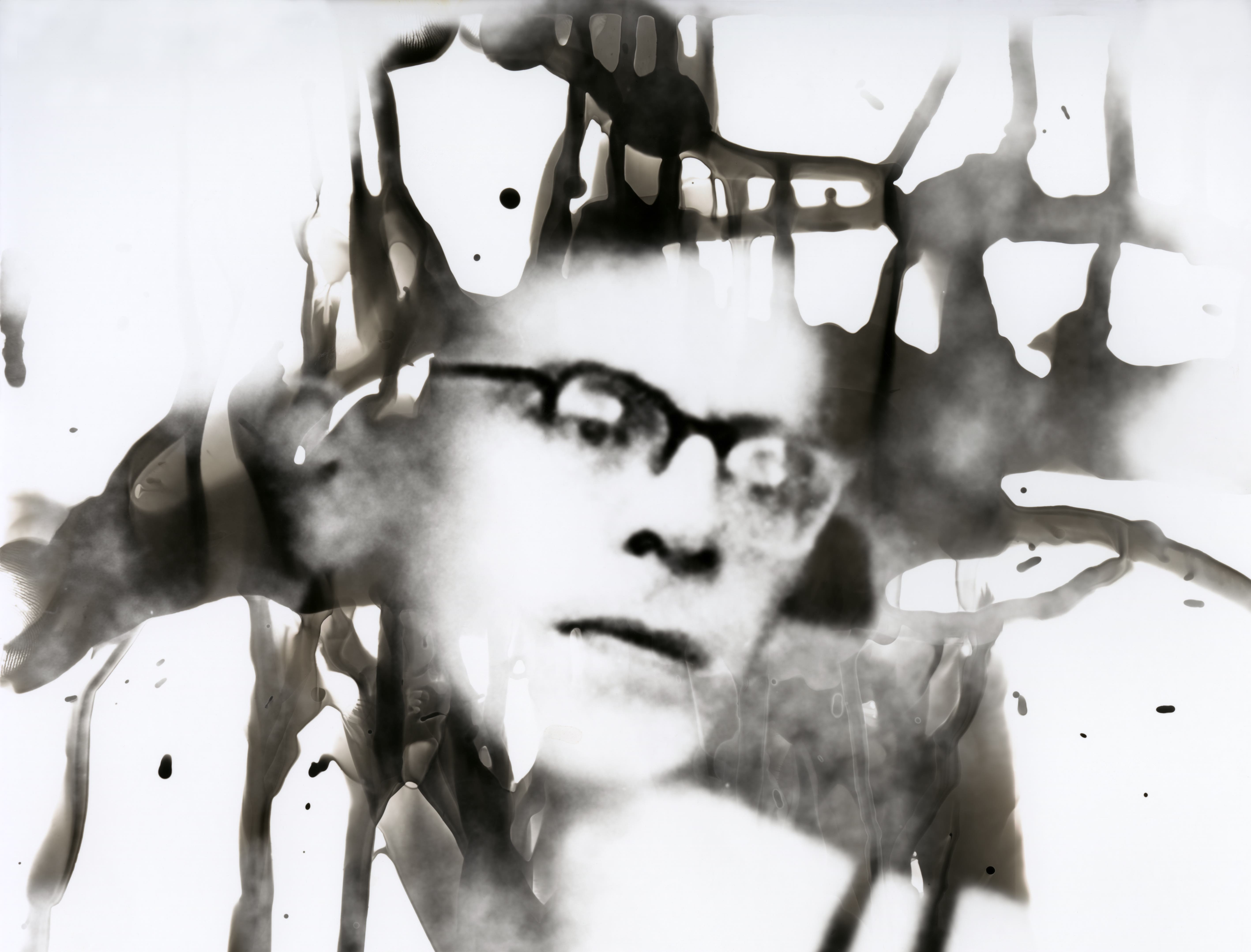 The archive undauntedly leaves gaps in the story, archives all too often do. This exhibition however provides a personal insight into a world that for trans people was, and remains to this day so unwelcoming, presenting a story of how love and acceptance can endure in the process.

Ken. To be destroyed is open 17 February – 24 March 2017 at the Upper Gallery, London College of Communication, Elephant and Castle, London SE1 6SB.

Linkedin
RELATED ARTICLES
OTHER ARTICLES
A new law change is enabling Britain’s donor-conceived children to know the truth about their origins – but campaigners say the fertility industry must do more to protect people.
A new film from Berghaus traces the story of Adam Raja, who left behind a turbulent upbringing to discover the healing power of climbing.
AI companies that develop image-generators using copyrighted artwork from the internet are coming under fire from artists who say that it amounts to theft.
Filmmaker Laura Poitras discusses her new documentary which traces the remarkable life of the artist-activist and the impact of her battle against the US opioid crisis.
The action took place in response to the 200 asylum-seeking children who were placed in hotels run by the Home Office who have gone missing.
At his West Bank restaurant, Fadi Kattan established himself as the voice of modern Palestinian cuisine. Now, he’s bringing his innovative, bold flavours to the UK’s capital.