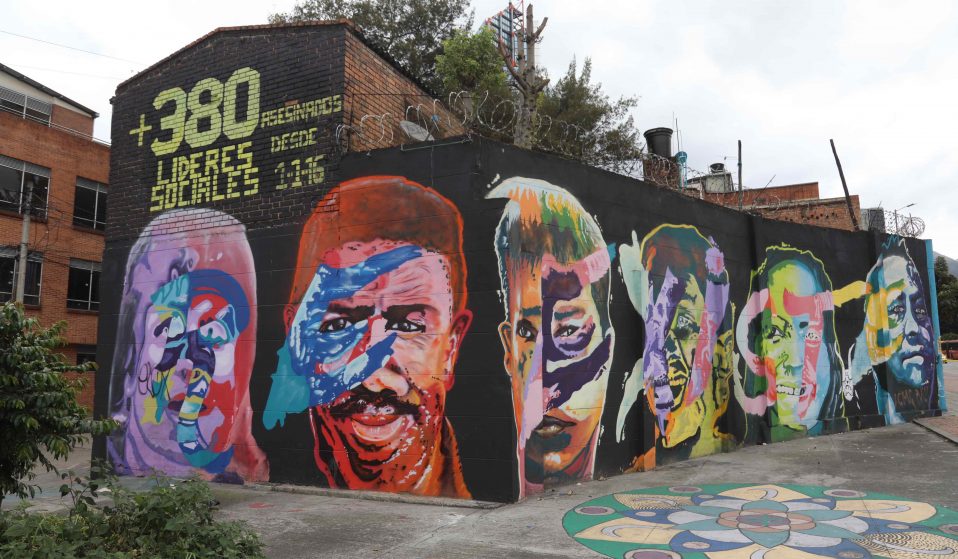 In Bogotá, the soft blue eyes of Diego Felipe Becerra gaze out from a gritty building flanked by high-rise apartments.

On August 19 2011, the 16-year-old street artist was painting a mural of Felix the Cat, his signature motif, on an underpass along Avenida Boyacá when the police arrived. The young grafitero, nicknamed Tripido, tried to run away – graffiti was technically illegal in the city – but he was shot dead.

It was later reported that the officers involved had fabricated an elaborate story with fake witnesses, and forced a bus driver to testify that Becerra tried to stage a robbery. A gun was also allegedly planted on the scene. It appeared to be the latest case of a “false positive”, whereby Colombia’s police killed innocent citizens, tampered with the crime scene to make it seem to be legitimate combat, and claimed the rewards of killing a gangster.

In the years after Becerra’s death, events snowballed. Thousands took part in marches to demand justice, and street artists defied the ban by painting messages across the city. As a result, the municipality decriminalised graffiti in Bogotá, and the striking, impressionist mural of Becerra is a pointed reminder of state violence in Colombia’s capital.

“Graffiti has been around in Bogotá since the ’60s,” says Ana Villa, a street artist and political science PhD student at the Universidad Nacional de Colombia. “But that was such an important moment for the scene here. We actually won. It showed that we could change things by ourselves.” 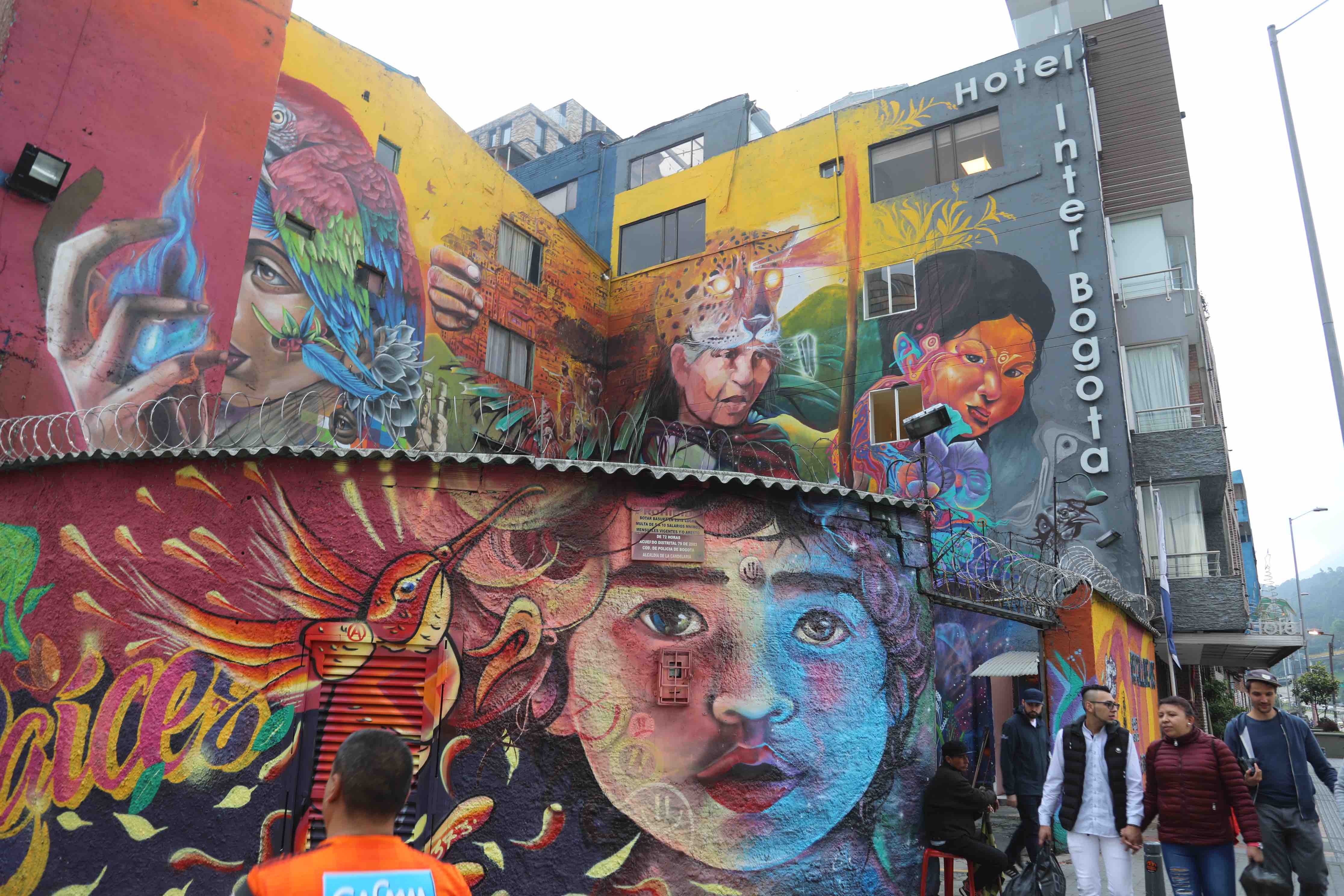 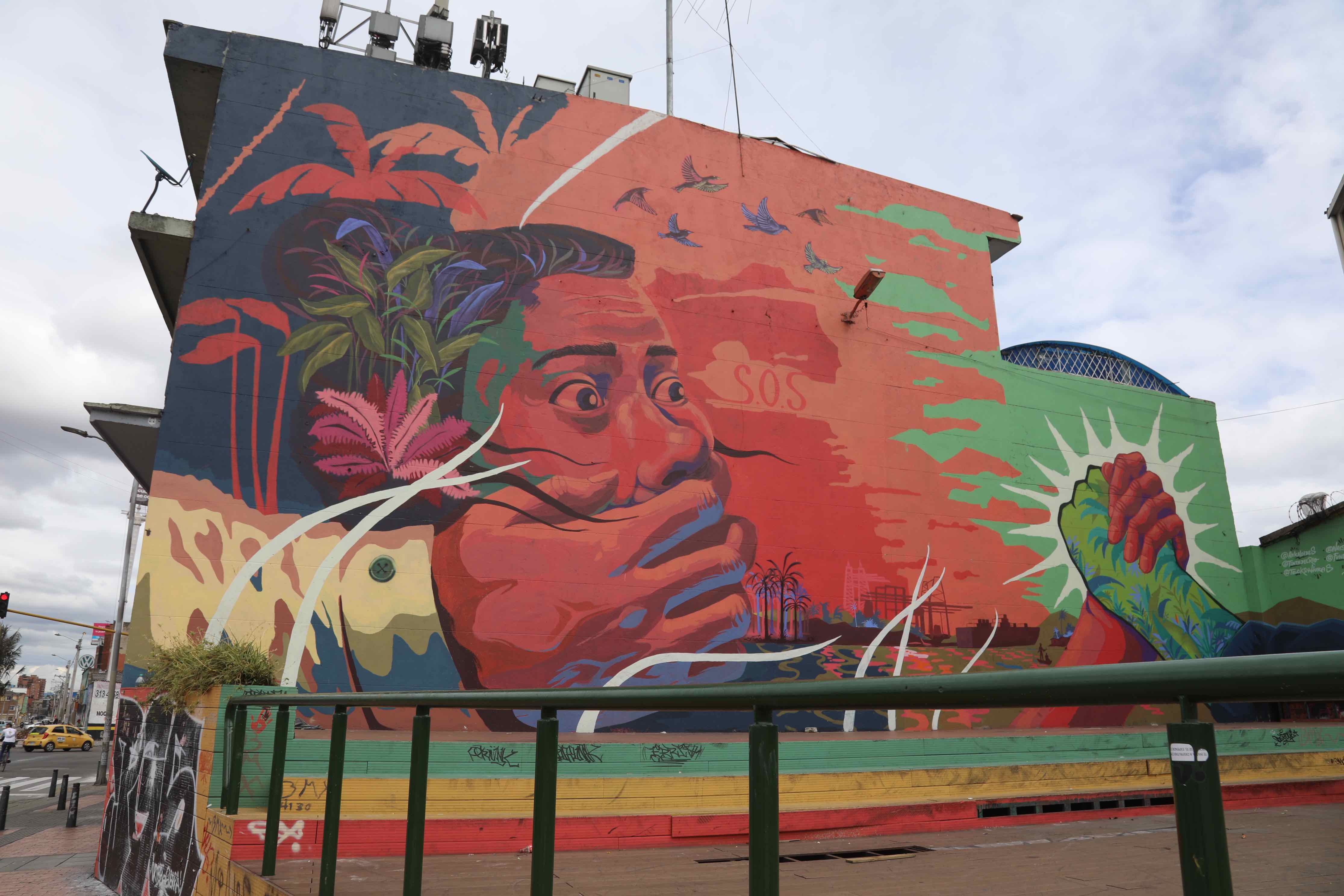 Ever since then, tag-style graffiti, inspired by ’60s US working class communities and hip hop culture, and mural-style street art, influenced by the art of the 1968 Paris protests, have blossomed as a form of political thought and critique writ large on the walls of Bogotá. According to Villa, there are now between 4,000 and 5,000 grafiteros in the city.

The works raise a broad range of problems, including the long-standing suffering of Colombia’s indigenous peoples, government-sanctioned mass killings, the privatisation of healthcare, the corruption of the narco-state, and Bogota’s dizzying inequality. But all, in their own way, constitute a rewriting of the state narrative.

“The graffiti here is often painted in a way to disguise the politics,” says Bill Rolston, a former professor of sociology at Ulster University, who wrote a study about the street art of Colombia in 2017. “If you walk by quickly you might just notice the colours, but actually there’s a serious message there. It’s a clever disguise, but quite deliberate.”

Toxicómano, a stencil collective, deal with themes that are anti-capitalist and anti-imperialist. One bold work features several portraits of Colombia’s most maligned: indigenous women and rural workers, above a background of bright red and orange shapes. Pineapples that look like grenades represent the war that has for decades ravaged the countryside; assault rifles are turned into dollar signs in a blunt reference to the money-making militia.

“It’s a way to open the mind of someone else,” says Juegasiempre, who was one of the artists to paint the mural. “Art in the street is much more open to people than it is in a gallery or a book, which can be elitist. The street is a space of freedom and democracy.” 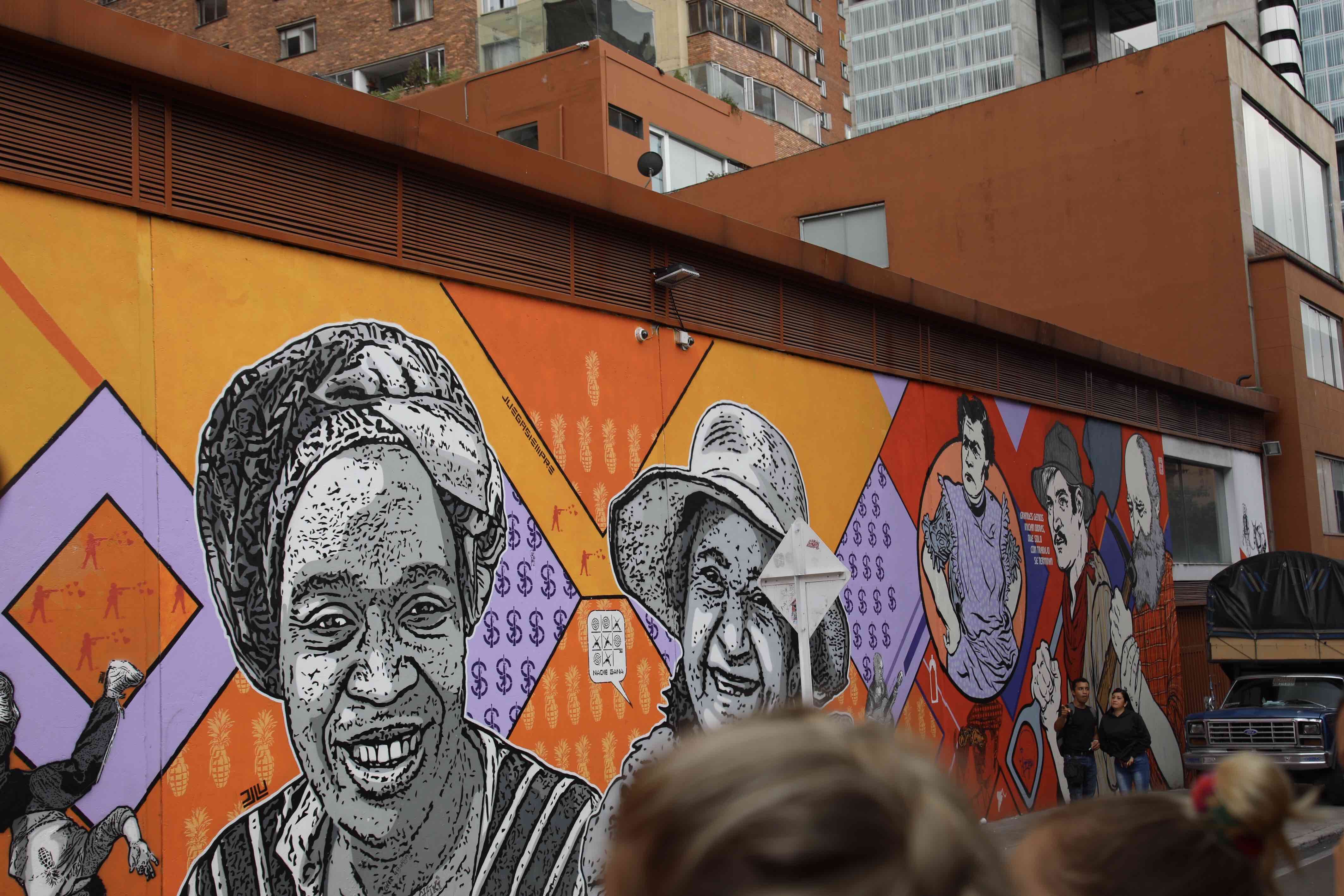 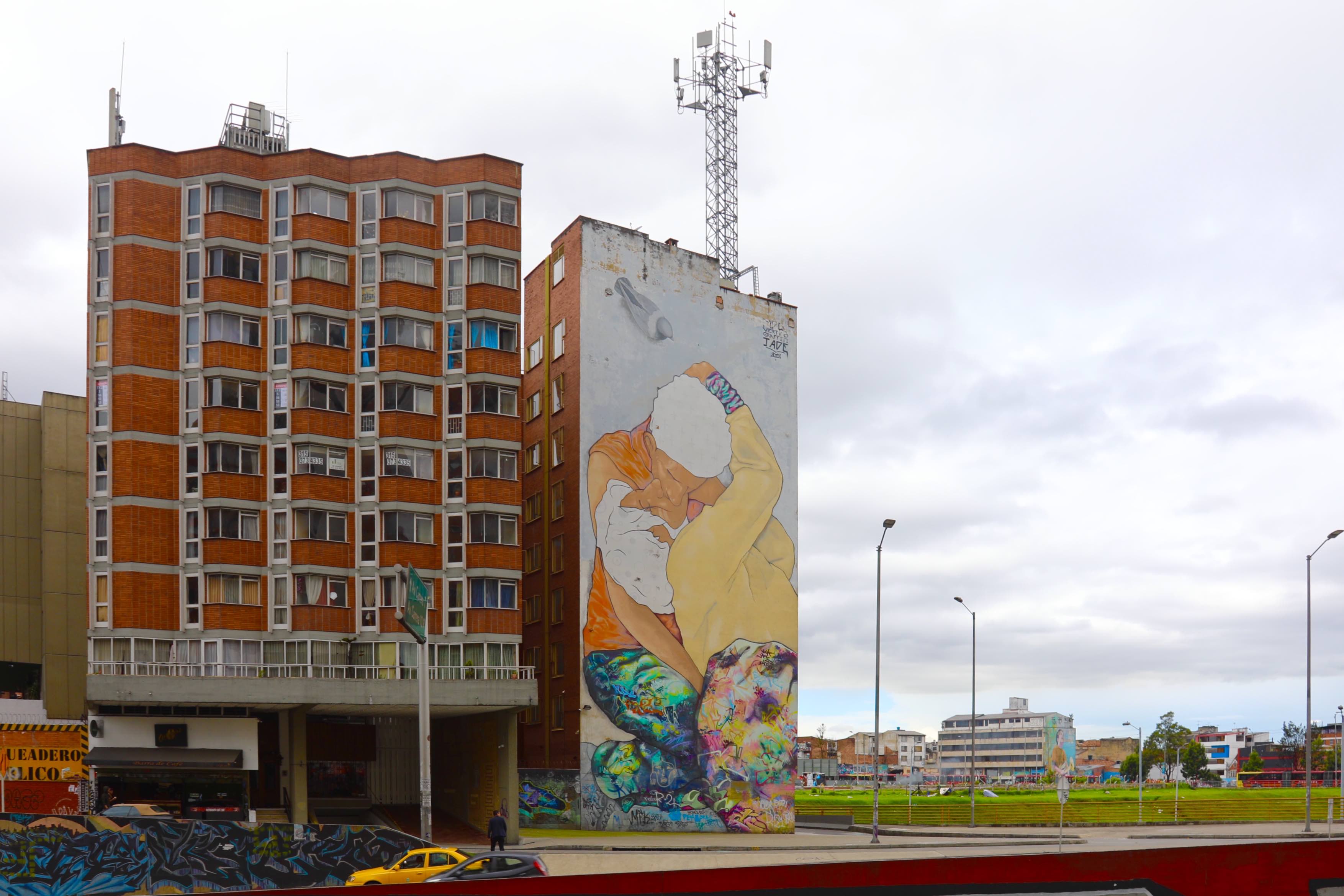 The fleeting kiss of two homeless drug addicts from Bogotá is the subject of a 10-storey-high mural created by Vértigo Graffiti. Known as “The Kiss of the Invisibles”, it is based on a photograph that became famous for its depiction of hope in the face of desperation. Their bodies intertwine for more than 100 feet, lips locked tightly.

“This is about respect and dignity for everyone,” says Camilo Fidel López, who founded the group. “By changing our daily habitat, we can change society.”

But Bogotá’s graffiti has played its part in even the most pressing politics of today. Over the past few months, the city has been rocked by hundreds of thousands of bogotanos protesting tax reforms, privatisation, and the right-wing government’s attempts to block a historic peace agreement that would end a decades-old civil war. Even old ladies joined in the protests, filling entire neighbourhoods with the sound of cacerolazo, the act of loudly bashing kitchen pots as an act of dissidence.

During the peak period last November, an 18-year-old named Dilan Cruz, who took part in a protest march to demand better access to education, died after being hit on the head with a gas canister fired by riot police, bookending the authorities’ habit for murdering teenage boys. “Dilan didn’t die, Dilan was killed,” was chanted through the streets.

Now his name is found all across the city, in portraits, spray-painted signs and on small stickers bearing the words: “Dilan Cruz. They serve as an alternative history to that of the Colombian state, for everyone to see and to never forget.” 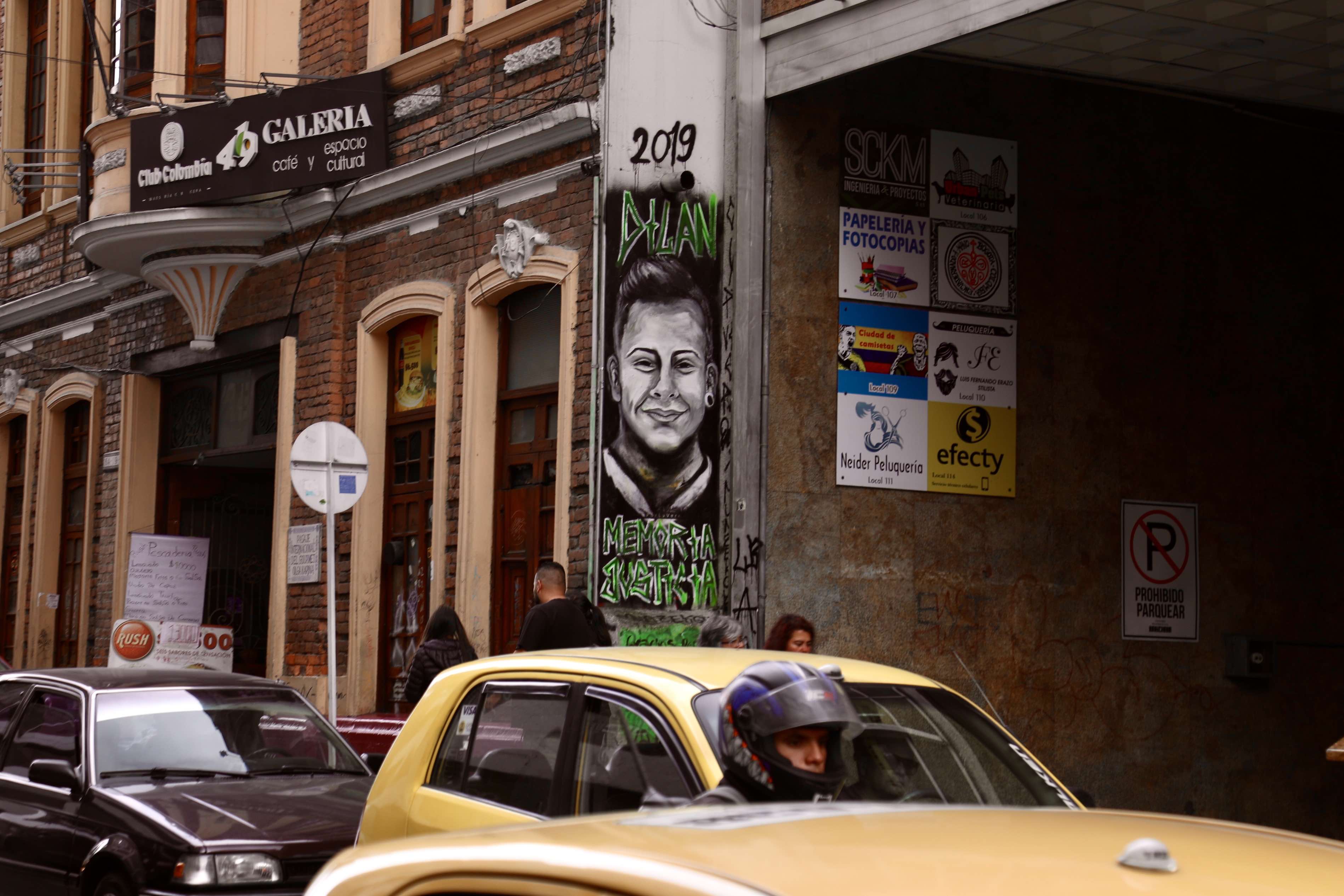 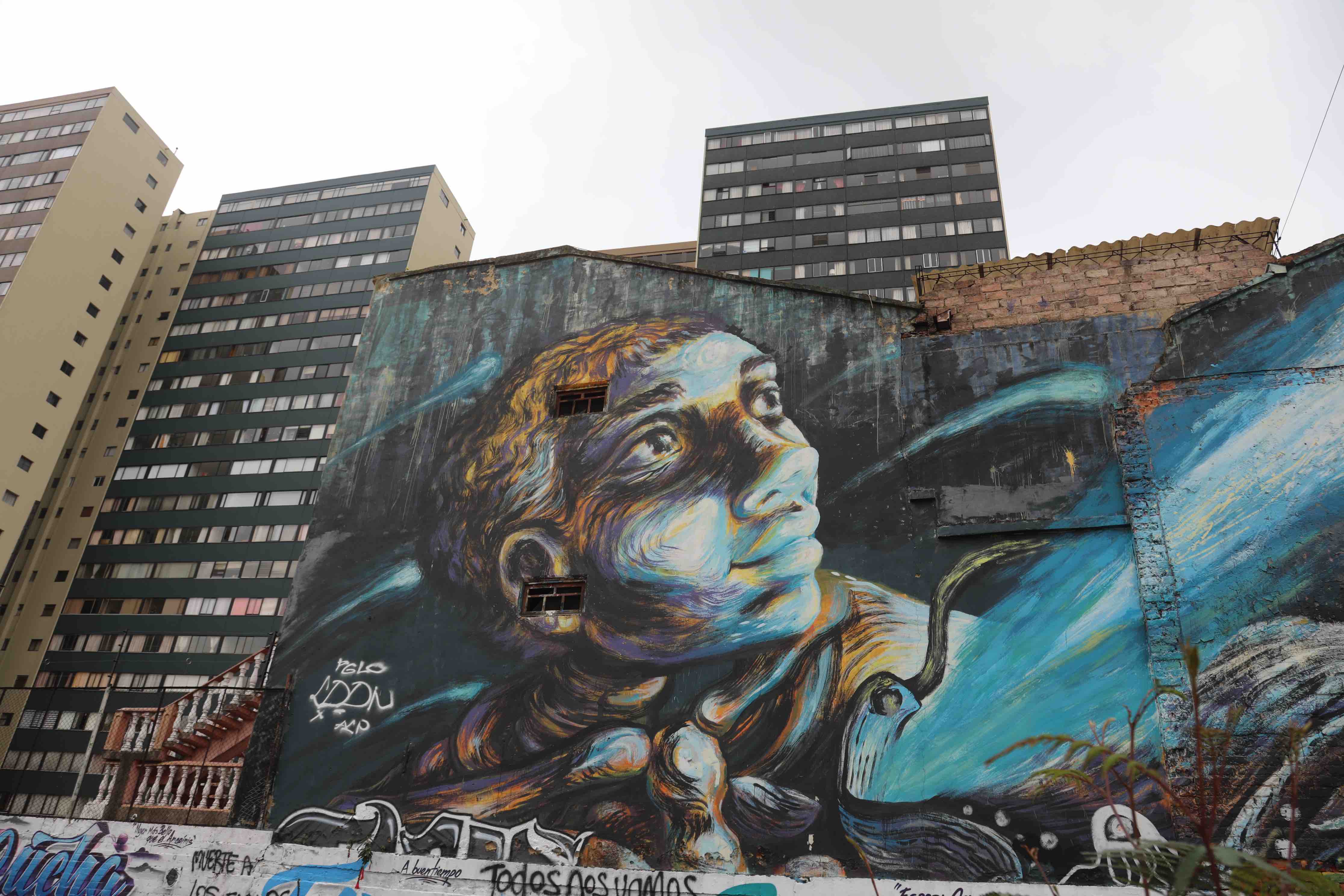 Linkedin
RELATED ARTICLES
OTHER ARTICLES
In her new book, the author explores the country’s housing crisis in human terms and calls for radical action to address a broken system.
With inflation now at a 40-year-high of 9 per cent, demonstrations organised by TUC took place to demand action from the government.
Freddie Miller’s new series of photographs investigates who today’s trainspotters are and what drives their unfettered enthusiasm.
On the fifth anniversary of the tower fire, around 18,000 joined the walk to remember the 72 dead and to demand justice.
Writers Gracie Mae Bradley and Luke de Noronha take on the callousness of borders, arguing for a world beyond them.
Finland-born photographer Sirkka-Liisa Konttinen looks back on her decades-long documentation of life in Northern England.