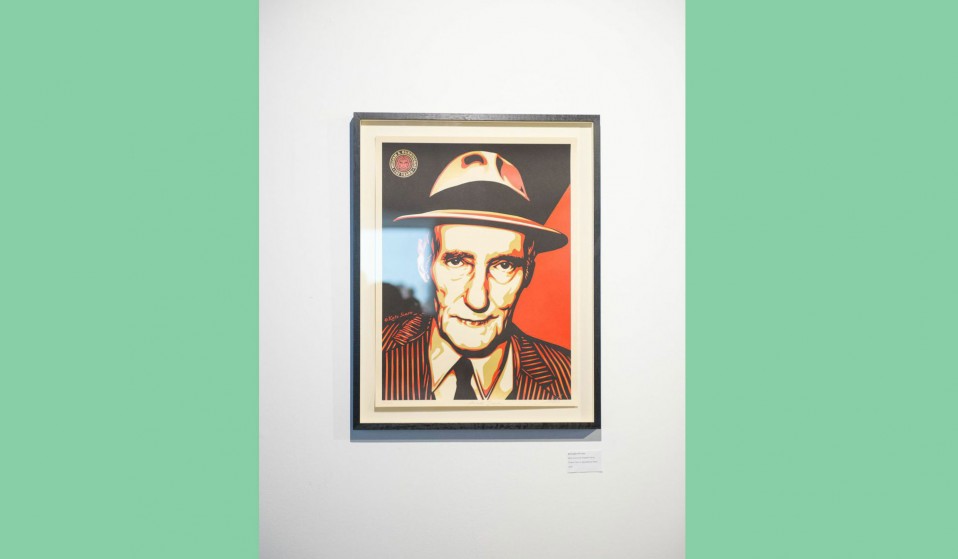 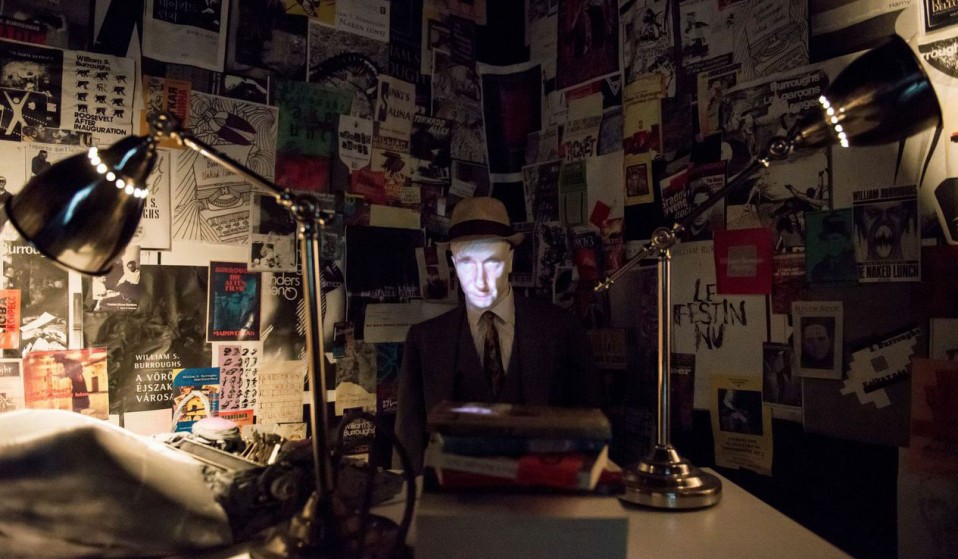 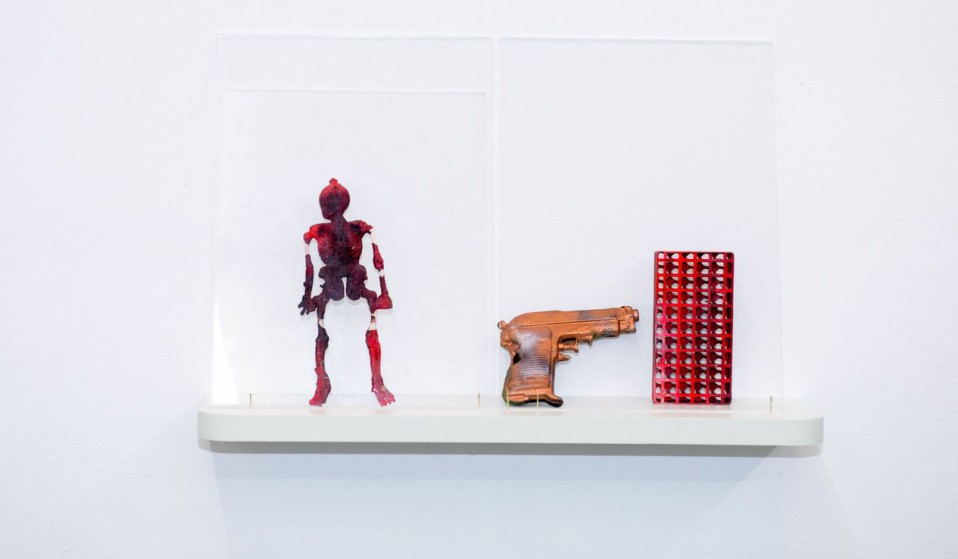 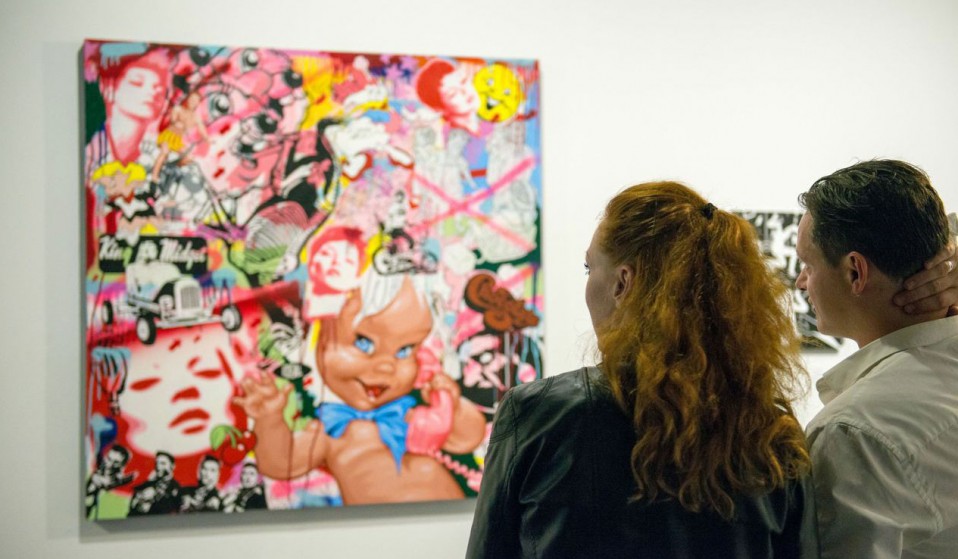 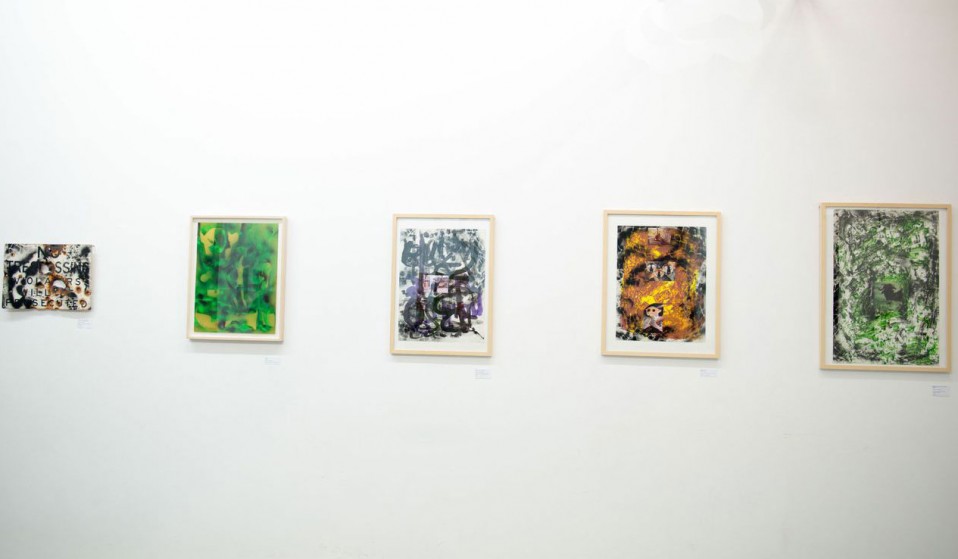 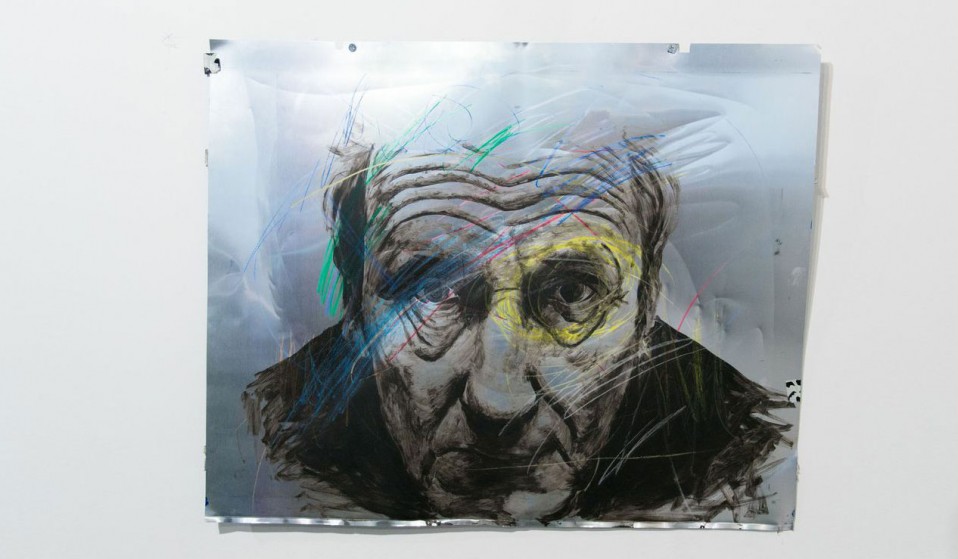 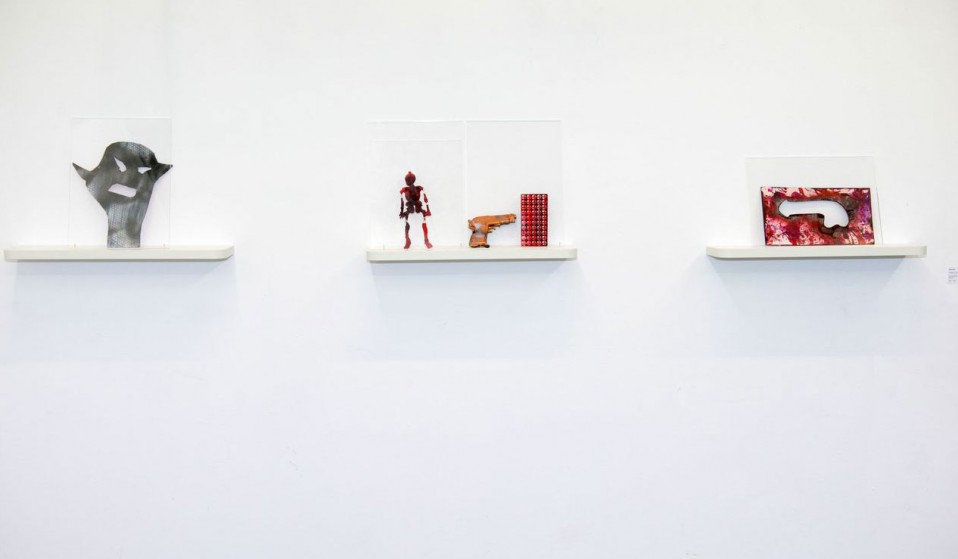 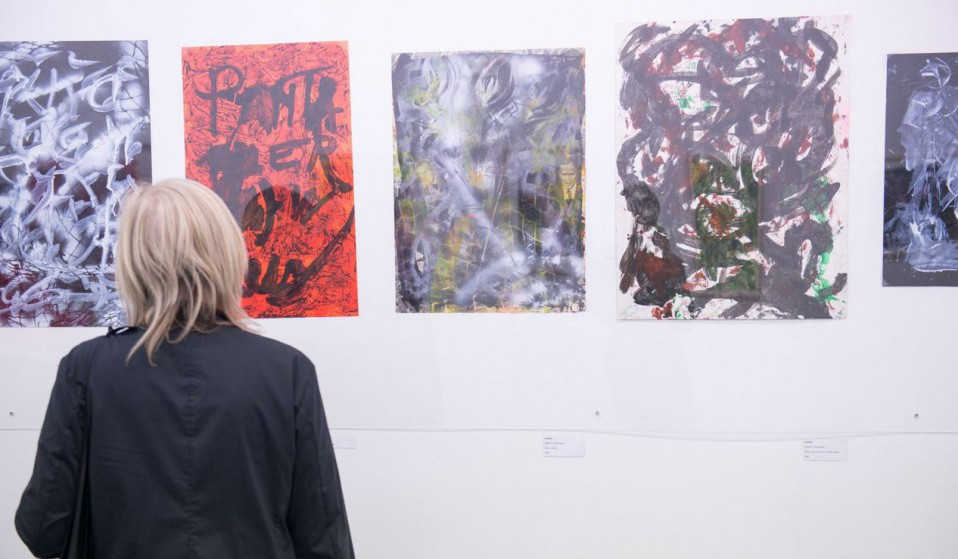 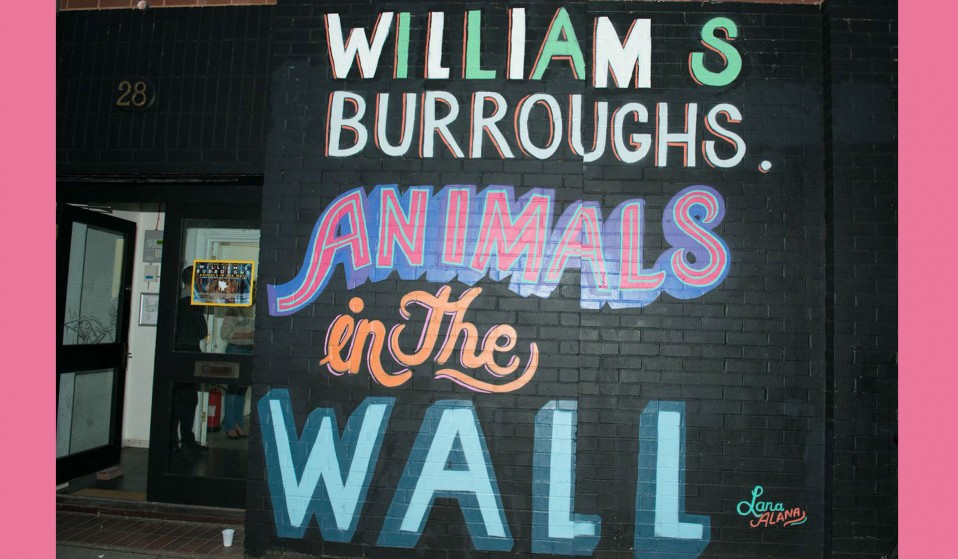 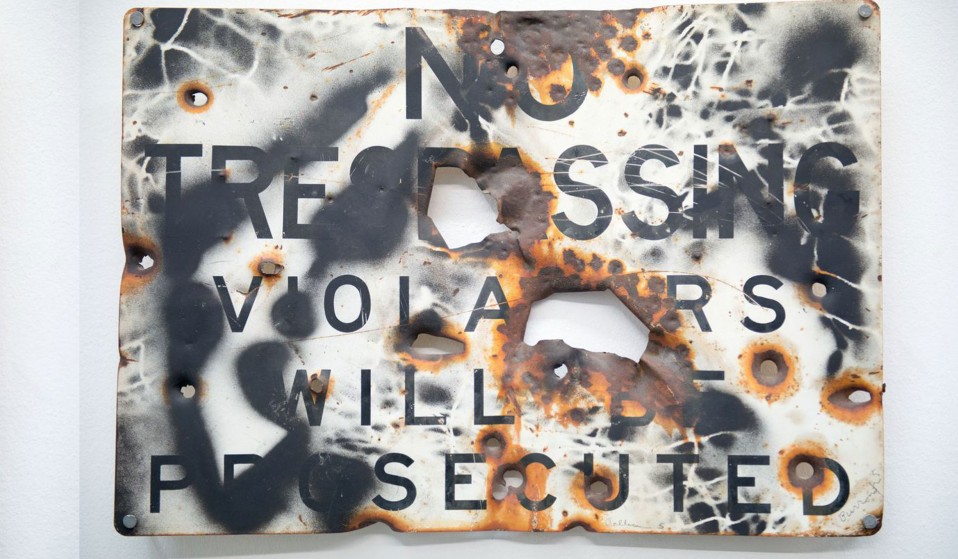 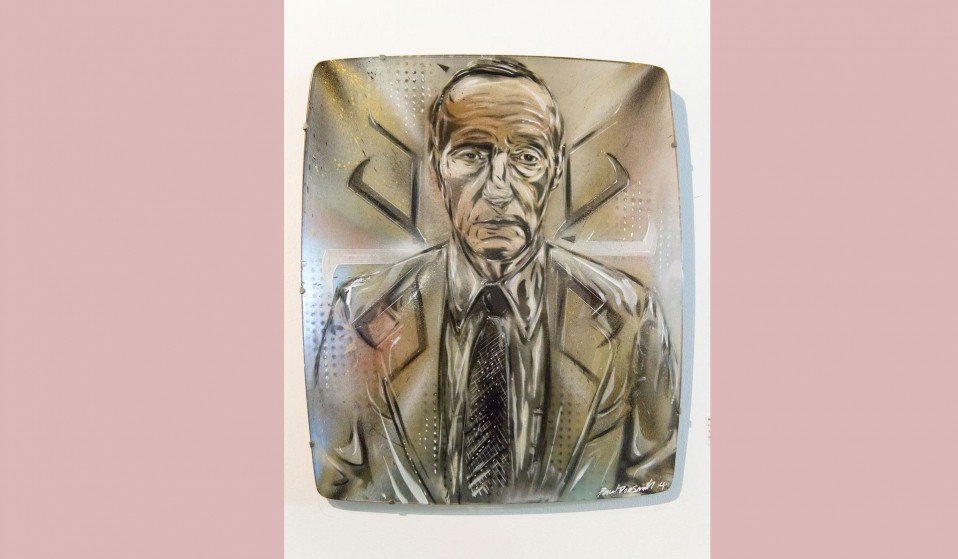 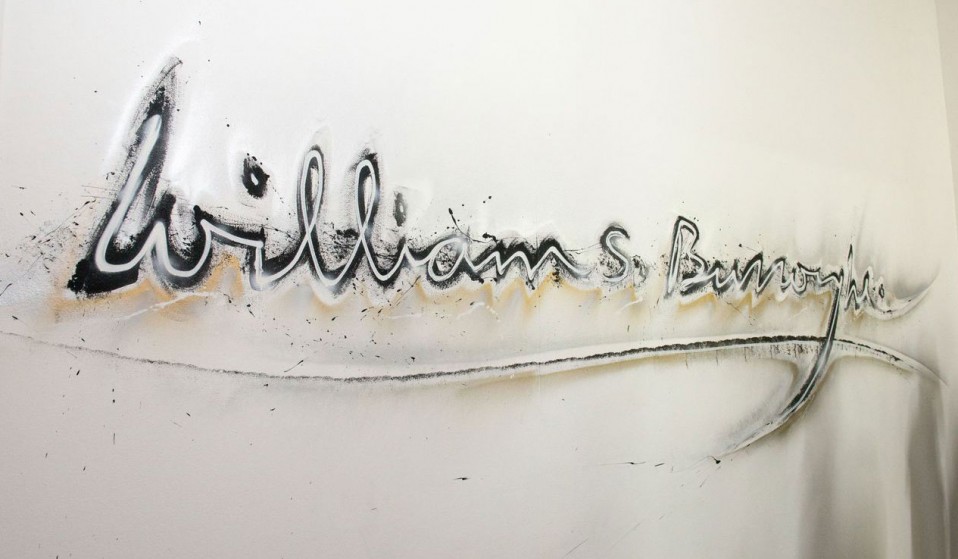 Dark, surreal and subversive pieces by William Burroughs and friends to celebrate 100 years since the birth of the antihero.

Dark, surreal and subversive pieces by William Burroughs and friends to celebrate 100 years since the birth of the antihero.

A new exhibition Animals in the Wall at LondoNewcastle gallery space in Shoreditch brings over 40 of beat iconoclast William Burroughs’ artworks – some never seen before – together with new work by affiliated visionaries like Shepard Fairey, Brion Gysin and Matt Black (of Coldcut) to celebrate 100 years since Burroughs was born.

The show, which runs until September 7, was curated by Burroughs aficionados James Elphick and Yuri Zupančič. We caught up with the beat lovers to find out more.

What is Animals in the Wall all about?
YZ: Animals in the Wall is a new exhibition of Burroughs’ paintings presented alongside multimedia installations and works of other relevant artists to create a vibrant and immersive experience. The title alludes to Mr B’s childhood visions of animals crawling in the wallpaper of his bedroom. These experiences inspired him at an early age to explore portals into the ‘magical universe’ just beyond consensus reality. These ‘animals’ also represent subversive underground characters breaking through walls of cultural ‘control’. This show is the latest and largest to debut in 2014, Burroughs’ Centenary year.

Why did you decide to put it on?
YZ: After working for the Burroughs Estate for over 10 years, I’ve sensed a need to present his paintings in a new light and context according to the spirit in which they were created and interacted with by the artist. Burroughs used these paintings as portals into the unseen and wished for others to use them in the same way. He also took a direct and unapologetic approach to art-making which resonates with recent revolutions in graffiti, multimedia art and cultural consciousness.

JE: We wanted to approach the works from a different angle and make them accessible to a new audience. Introducing the scope of Burroughs’ worlds to a younger generation that might not have discovered the Beat Generation and its exploration of the human condition. In the spirit of creation we invited a number of artistic responses from the likes of Shepard Fairey, Matt Black (of Coldcut), Ben Frost, Mobstr and others.

How do you hope the show will have an impact?
YZ: It’s important – especially for artists and thinkers of today – to see how diverse and far-reaching a single man’s work can be. We hope this show encourages viewers to keep pushing the envelope and expanding the scope of creative exploration.

JE: The location was also an important choice, with the surrounding streets covered in spraypaint, collages, letter forms and stencils, mirroring the techniques used by Burroughs in the ’80s and ’90s. He was an predecessor to the prevalent street art forms which are ever so popular in the contemporary art world.

What’s the contemporary Beat art scene like?
YZ: We’re fortunate to be exhibiting art from Beat ‘survivor’ Terry Wilson and receiving invaluable guidance from James Grauerholz and other folks who spent heaps of time working with Burroughs and crew. We’ve relished the opportunity to directly connect these influences with younger contemporary artists who resonate with the Beat ideals of total freedom and critical thought to the point of subversion. The questions and concerns of Burroughs, Ginsberg, et al, are still incredibly prescient, thus inspiring generations of younger artists to think outside the box and carry the torch. The energy and creative output in these directions is going strong and ‘the beat goes on’. The characters involved come from diverse backgrounds but generally pursue their questions and exploits with intense scrutiny and little regard for societal constructs: a nebulous band of intelligent rebels, you might say.

What were the challenges in bringing the show to life?
YZ: In order to maintain the integrity of our vision, James Elphick and I have orchestrated this whole exhibition with minimal financial support or sponsorship. Fortunately a few like-minded organisations and characters have come forward to lend a hand, etc, but in the end, the vast majority of our efforts are self-funded and pulled off by the skin of our teeth. We only had about 36 hours to install this sprawling show, so the two of us worked full-on, non-stop with a rogue band of volunteers to pull it together. We’re catching up a bit on sleep now and very proud of the way it came together.

JE: Indeed the funding of the show outside of an institution has been a challenge, but we had to make this show happen and it’s been a real pleasure to bring it to the public. The unique artistic responses from international and local artists has kept the show in constant evolvement and I’m excited to see how it develops and reacts differently in each new city.

What were the major inspirations for the show?
YZ: Burroughs said that, in art, he wanted to create ‘a beast, a very dangerous beast’, and we can affirm that he succeeded in that! The more you look at these works, the more you notice that they are looking BACK at you. As a curator, this triggers a distinct longing to free these beasts from their solitary confinement in the archive. Furthermore, they need to eat, so we’re implored to put them in a context where people are feasting their eyes upon the works, and vice versa.

JE: Burroughs’ explorations and influences have wrapped their unseen tentacles around so much of contemporary culture, from music, film and books to computer games, art, photography and more. Being in a gallery surrounded by his art is truly inspiring – each piece is like a portal into another realm and connecting them together to tell a hidden narrative is one of the great pleasures of curating this show.

What’s next?
YZ: We’re beginning discussions with galleries and museums around the world to put this show on the road. It’s been a dream come true to premiere it in Shoreditch, but there are many, many other places which could benefit even more from the experience of this exhibition. Aside from that, I’ll be continuing other Burroughs curation with an upcoming show opening in Chicago in late October and working with October Gallery here in London to present another exciting show in December.

JE: Guerrilla Zoo is also working with the October Gallery’s show to create a special event to celebrate Burroughs 101st birthday. More details on this soon.

What are your favourite works by Burroughs?
YZ: I have personal attachment to ‘Boot Hill’, Spray Paint and Shotgun Blasts on Plywood, because it’s named after a cowboy cemetery close to my childhood home in Dodge City, Kansas. I particularly like also LA Riots, Ink on Paper, because it’s hardly been seen by anyone and in this work Burroughs serendipitously managed to depict striking likenesses of crying faces and shadowy figures in burning streets with only a few quick swipes and dabs. ‘No Trespassing’, Spray Paint and Gunshots on Found Sign, is a real standout as it perfectly captures the surreal and desolate sense of wild west ruins and bears particularly poetic shadows of warped grids and a gun rendered in spray paint. Also, the gnarled gunshot holes on this one are rusted over, showing that the gunshots themselves are now a distant memory. We liked this one so much that we made a limited edition lithograph print which we’re selling online and at the gallery.

JE: So many pieces, it’s very difficult to choose. We selected an entire exhibition of works! I do really like the pieces we created for the limited edition lithograph prints – each has a different angle to Burroughs’ techniques and it’s been a privilege to produce them. For those that can’t afford the artworks, get hold of a print before they are all gone, forever!\

You can see Animals in the Wall at LondoNewcastle until September 7. Check back to Burroughs 100 for more events around the artist’s centenary anniversary.

Linkedin
RELATED ARTICLES
OTHER ARTICLES
Photographer Becky Tyrell went down to the fading banger and stock raceway to meet a community desperate to keep it alive.
Since 2007, Gideon Mendel has made 20 trips to document floods in 13 countries. The result is an alarming record of what has already been lost to the climate emergency.
Filmmaker Laura Poitras discusses her new documentary which traces the remarkable life of the artist-activist and the impact of her battle against the US opioid crisis.
Activists and campaigners are fighting back against new laws that would seriously undermine the ability to take industrial action, calling it an attack on fundamental workers' rights.
A new exhibitions brings together the work of photographers who documented the deep unrest of these pivotal decades.
AI companies that develop image-generators using copyrighted artwork from the internet are coming under fire from artists who say that it amounts to theft.