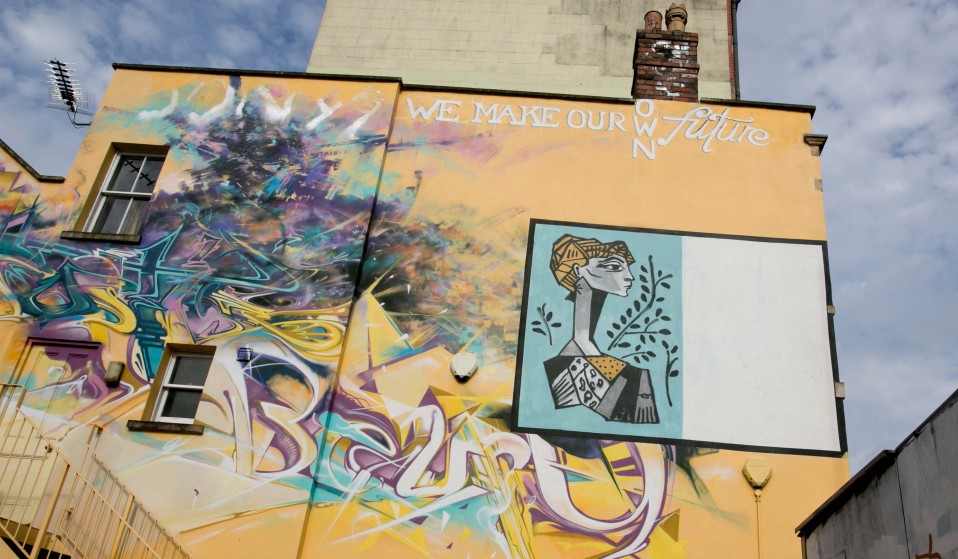 The People’s Republic of Stokes Croft is using street art to preserve the identity of Bristol’s most culturally diverse neighbourhood.

The People’s Republic of Stokes Croft is using street art to preserve the identity of Bristol’s most culturally diverse neighbourhood.

“You can chart the takeover of this city by the corporates,” explains Chris Chalkley, founder of The People’s Republic of Stokes Croft in Bristol. “It’s a battle that I never envisaged we would be getting involved with. And basically what this is, this is the physical manifestation of the fightback against globalisation.”

From where we’re standing, outside the PRSC HQ in the centre of Stokes Croft, the battle looks like a colourful one. And Chris’ weapons of war are step ladders, paint, rollers and spray cans. Stretching down the block is a giant public street art wall which gets repainted by a new artist each month – and is the centrepiece of PRSC’s efforts to transform Stokes Croft peacefully, through street art.

Stokes Croft popped on to most people’s radars during the so-called Tesco riots in 2011. The area had long been one of the most deprived, neglected and derelict areas in the city, but very much alive culturally. “This area was seen as the place you would walk through as quickly as possible, neither looking to the left nor right,” Chris explains. “But I realised it was probably the most interesting place in the city and the most vibrant.” 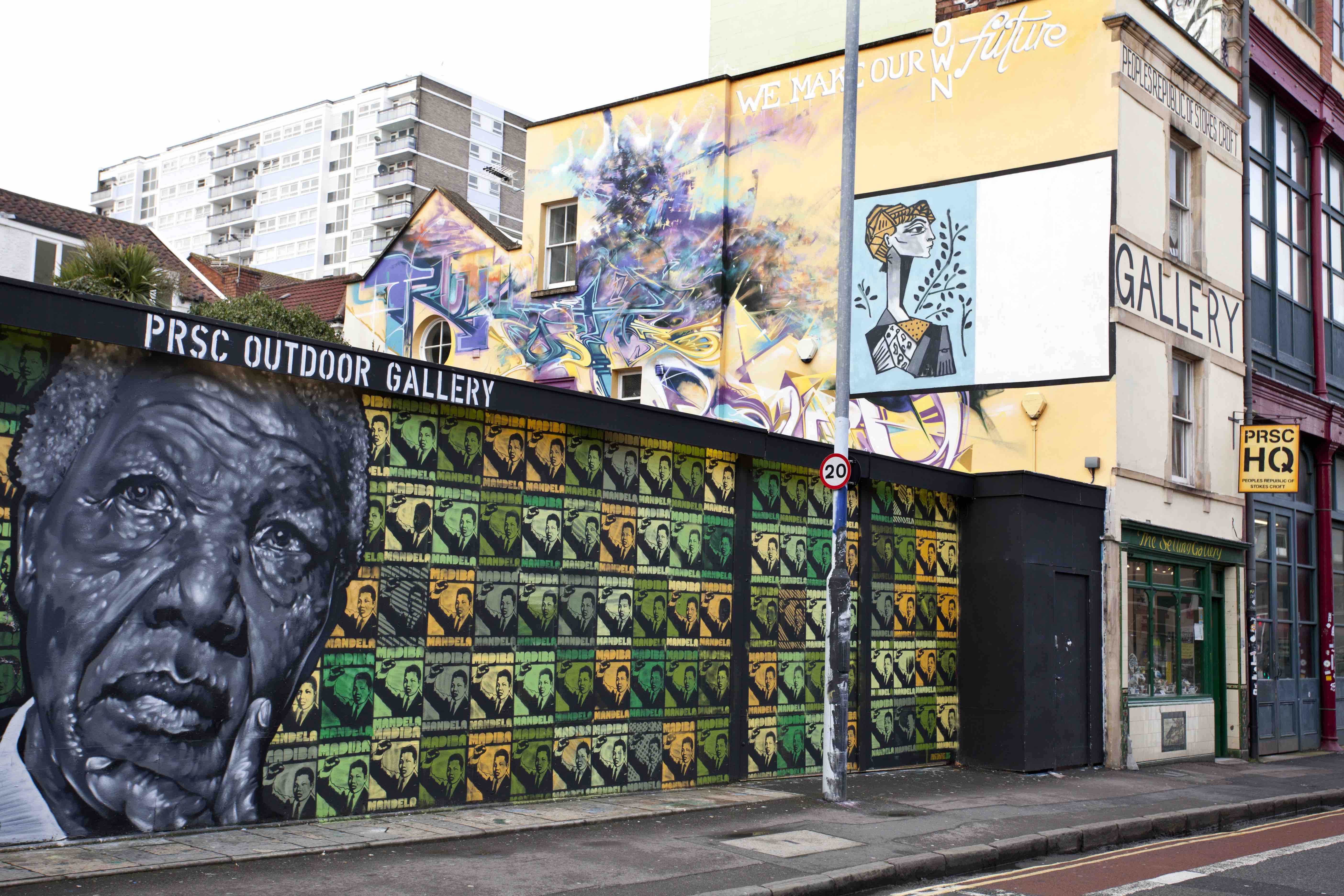 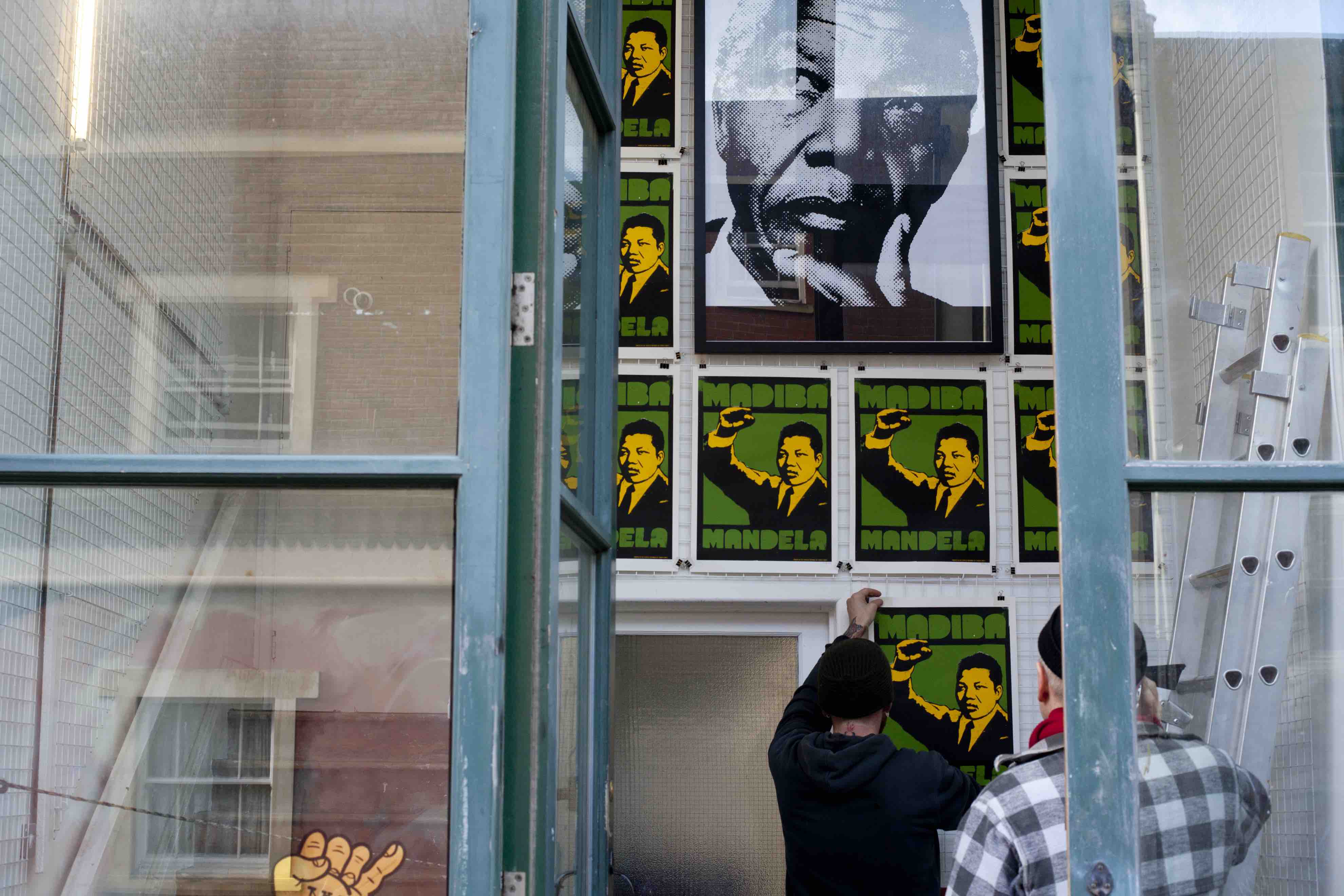 The area’s low rents provided sanctuary to artists and small businesses, but inevitable gentrification started to create frictions – which came to a head when Tesco rolled into town. Despite passionate public protest, the supermarket chain opened a new store on a street that had previously been one of the longest uninterrupted stretches of independent shops in the world. Tensions erupted after a heavy-handed police raid on a squat across the road, Tesco was ransacked, a police jeep was wrecked and 52 people were arrested.

Chris and many others condemned the violence, but it reflected a widely-held sense of betrayal at the community’s voice being ignored in favour of outside business interests. The debate gave PRSC an opening to push for asserting real community ownership over their neighbourhood. The volunteer-led organisation runs galleries, studios, a Dutch auction house and hosts events – all for the local community.

In the yard next to PRSC’s gallery-come-cultural centre-come-base of resistance, each of the high walls are covered with murals. “This is a yard we built, and we did this dead sneaky, no planning permission,” Chris explains. Just after the Tesco riots the council’s planning enforcement officers tried to raise a stink. “I said, ‘Well, you’ve just shafted us with Tesco, so you’re now going to prosecute a community group who have clearly been doing positive things in the area for the last five years?’” he explains.

“That’s been at the heart of the ethos of what we’ve been doing,” he continues. “You do something illegal, but you do it so beautifully and so well that they would look stupid trying to prosecute you for it, which is how we’ve taken on, how we’ve developed an ethos of looking after the area’s public spaces. Which is complex, because there are also the forces of negativity and destruction as well.” 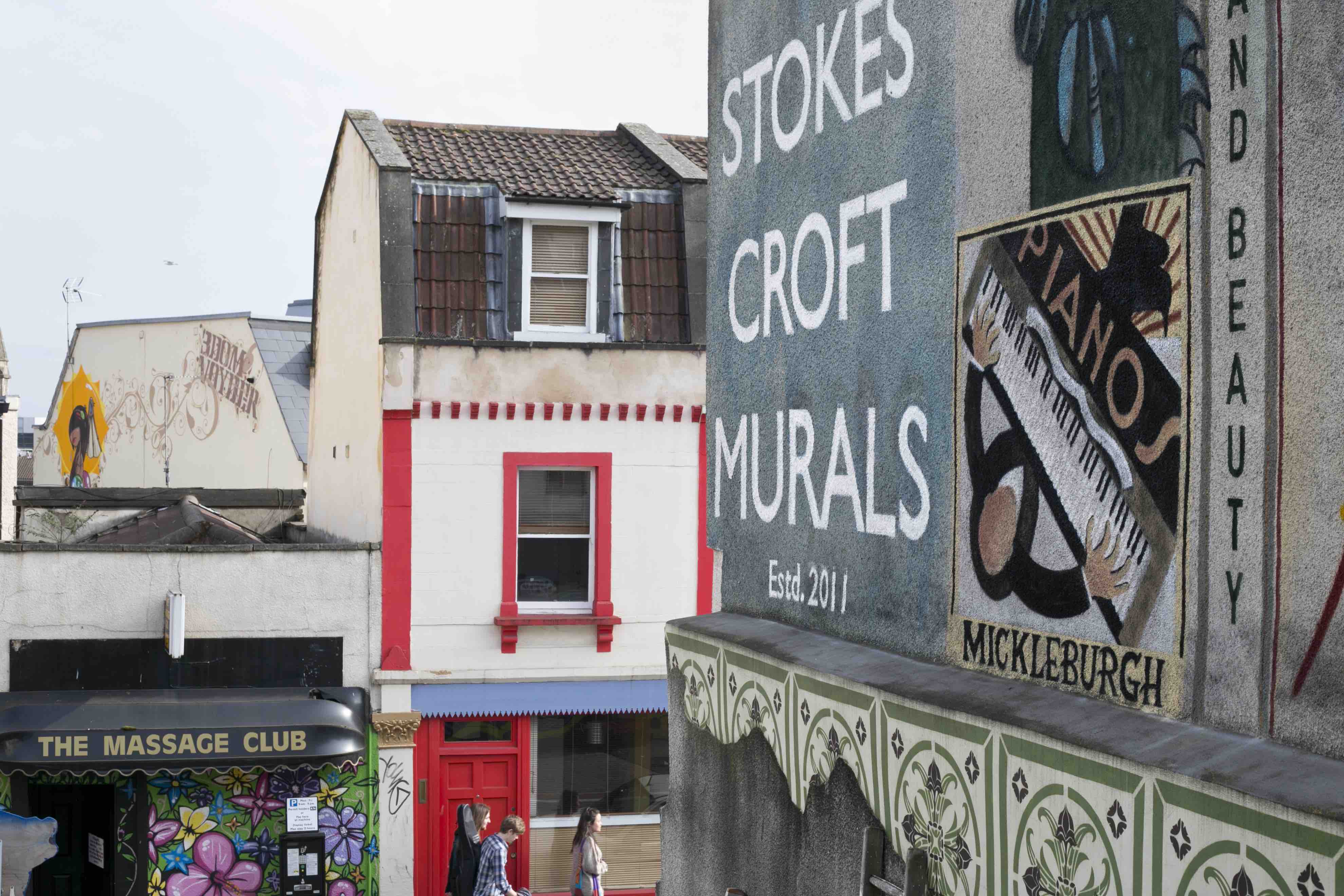 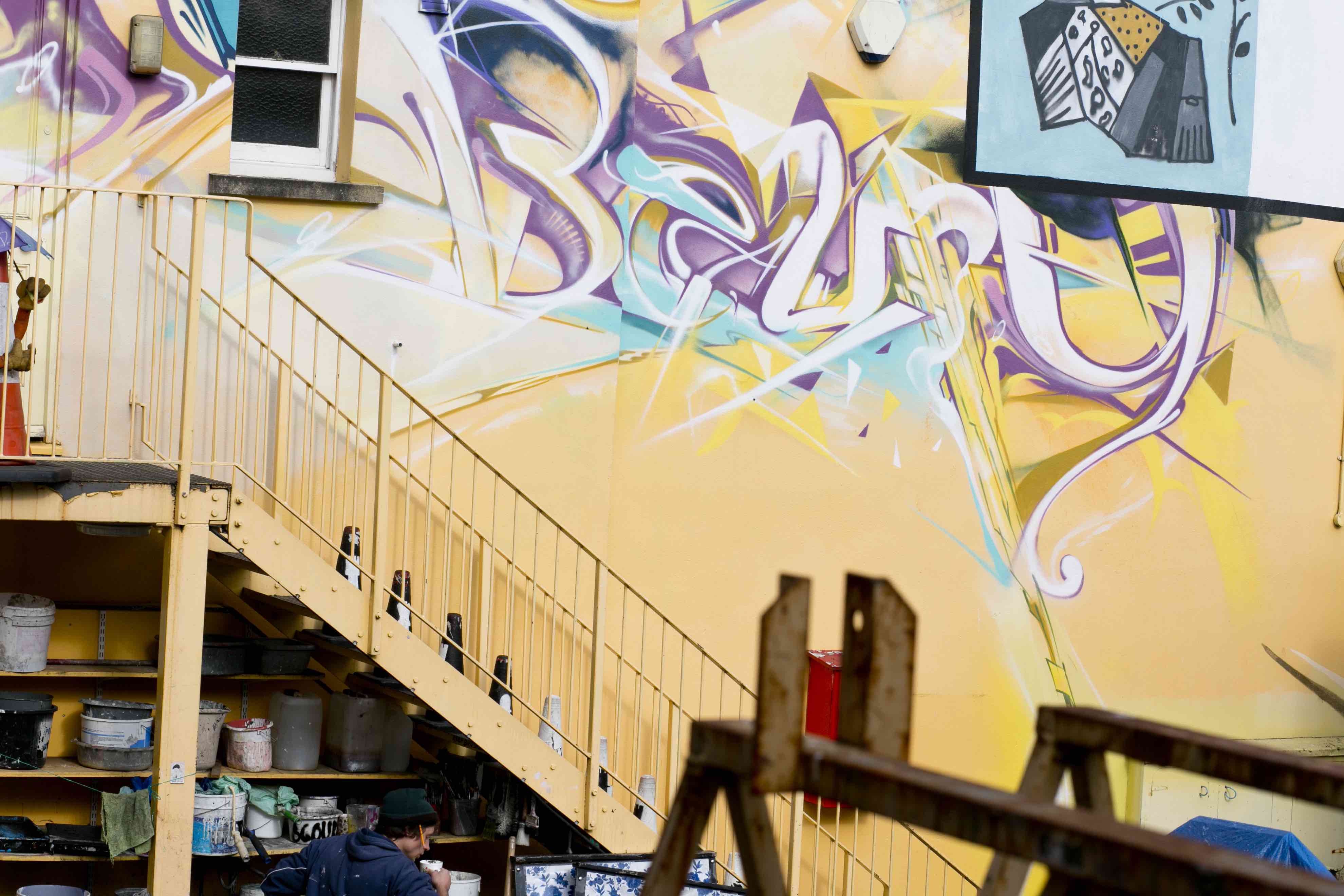 PRSC began by opening up spaces for street art throughout the neighbourhood, providing a counterweight to the advertising images that otherwise dominate the era. They helped revitalise many derelict buildings and gave the area an image refresh, providing a platform to artists to celebrate provoke discussion and celebrate the cultural heroes to to the area’s diverse residents.

Some have seen PRSC’s contribution as fuelling the gentrification boom that has created winners and losers in Stokes Croft, but Chris is conscious of avoiding the problems seen elsewhere. “I’m hoping that we don’t go the way of Hackney and Shoreditch, the full gentrification route,” he explains. “The only way that I can see that happening is through the ownership of property – property owned by the community.” PRSC are expanding and have turned their new buildings into community and studio spaces. They’re encouraging others to do the same: take ownership and ensure development serves the needs of local people and not outside interests.

“When you look at the huge things are happening you think the world is too big for you to have an effect,” Chris explains. He looks up to the giant slogan that dominates the yard. “[We Make Our Own Future] was the first thing we wrote back in 2007,” he remembers. “It’s a slogan that sums up everything: it’s up to all of us. Here, we’re actually making stuff to make our own future. Everything we do is laden and layered with meaning and is participatory – it’s political. Building this creates possibility. It’s essentially to be pilots for our own destiny.”

Find out more about The People’s Republic of Stokes’ Croft.

Linkedin
RELATED ARTICLES
OTHER ARTICLES
For decades, an area of East London has served as a community hub for Vietnamese people looking for a taste of home.
A new report has found that the majority of Britains approach trans issues with compassion. It’s about time this was reflected by our media landscape.
Freddie Miller’s new series of photographs investigates who today’s trainspotters are and what drives their unfettered enthusiasm.
On the fifth anniversary of the tower fire, around 18,000 joined the walk to remember the 72 dead and to demand justice.
In her new book, the author explores the country’s housing crisis in human terms and calls for radical action to address a broken system.
The past five years have seen a staggering increase in foodbank usage across the UK. Now, staff fear things are set to get much worse.