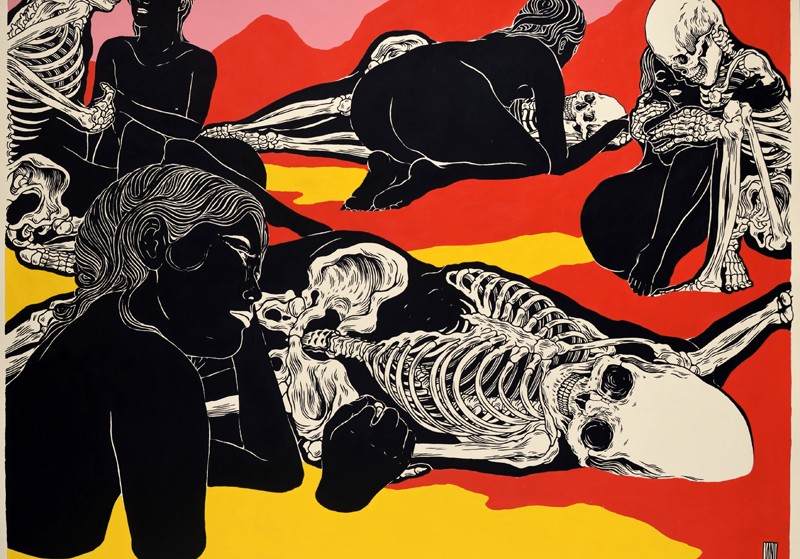 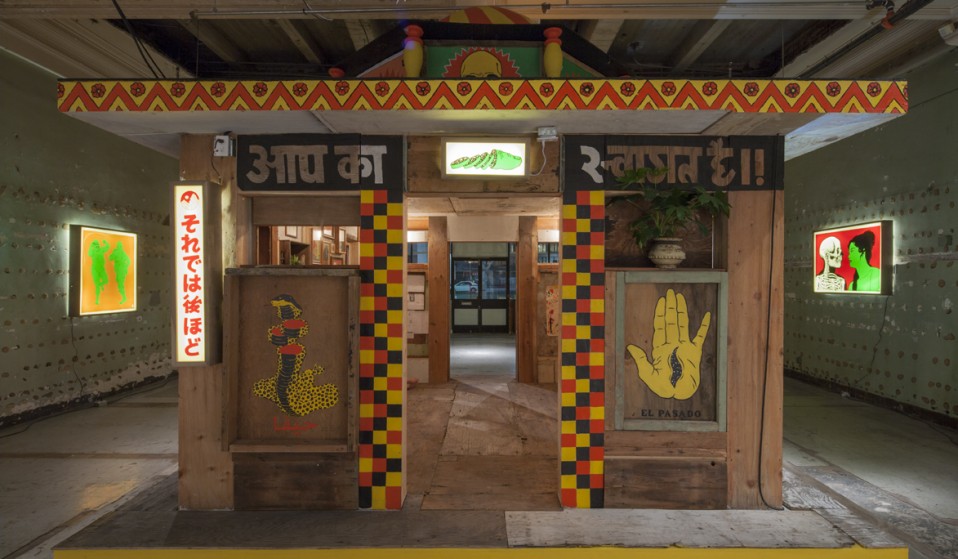 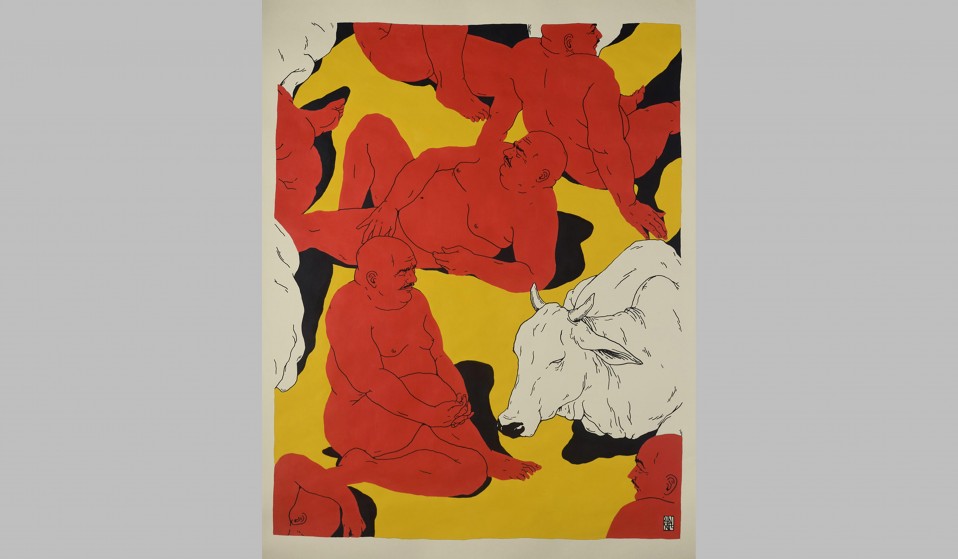 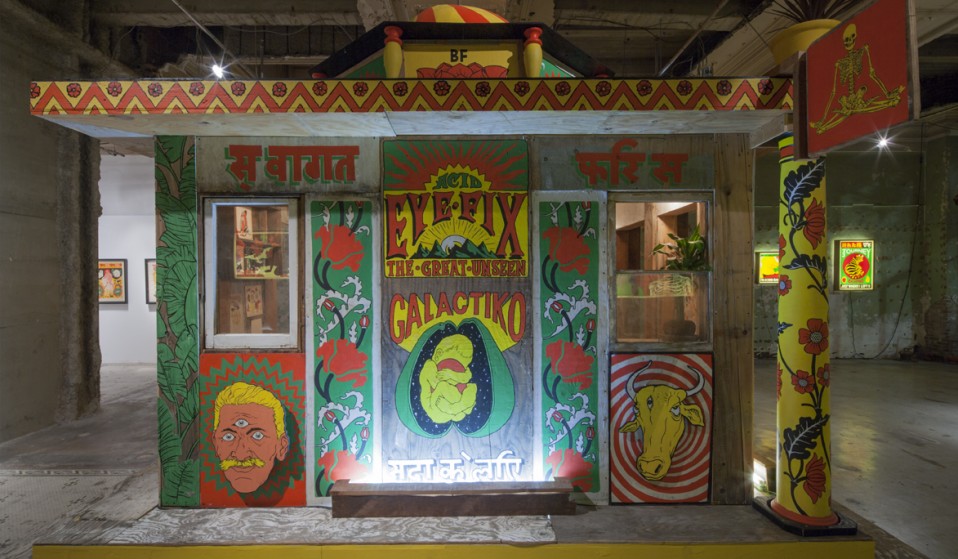 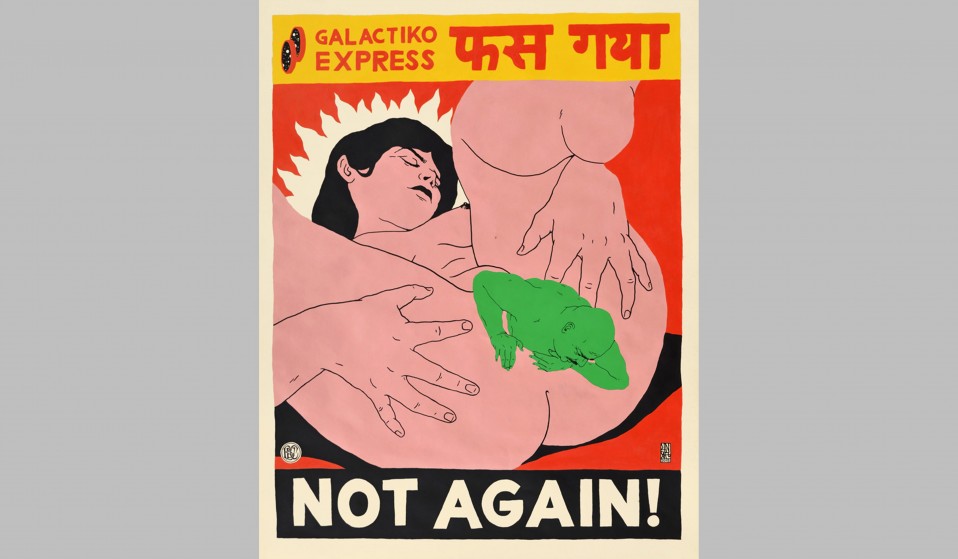 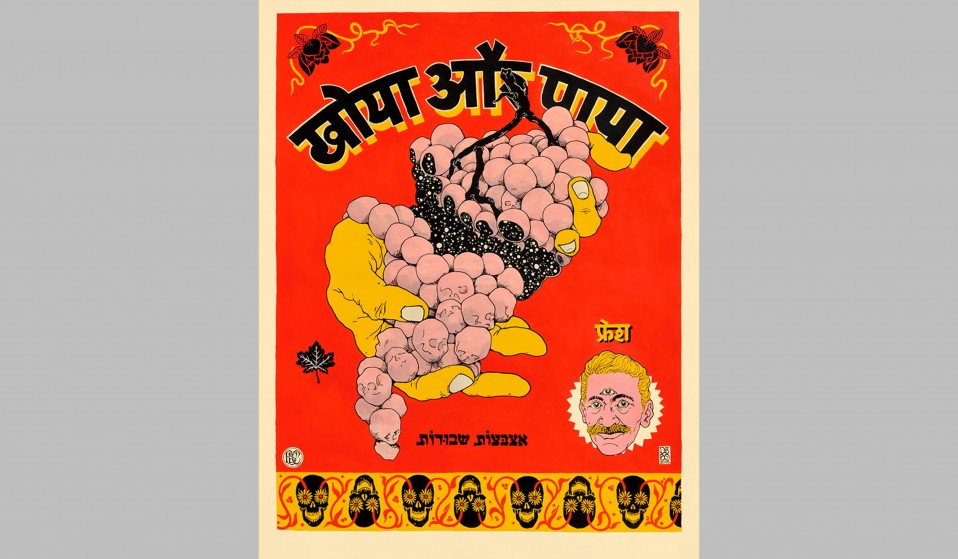 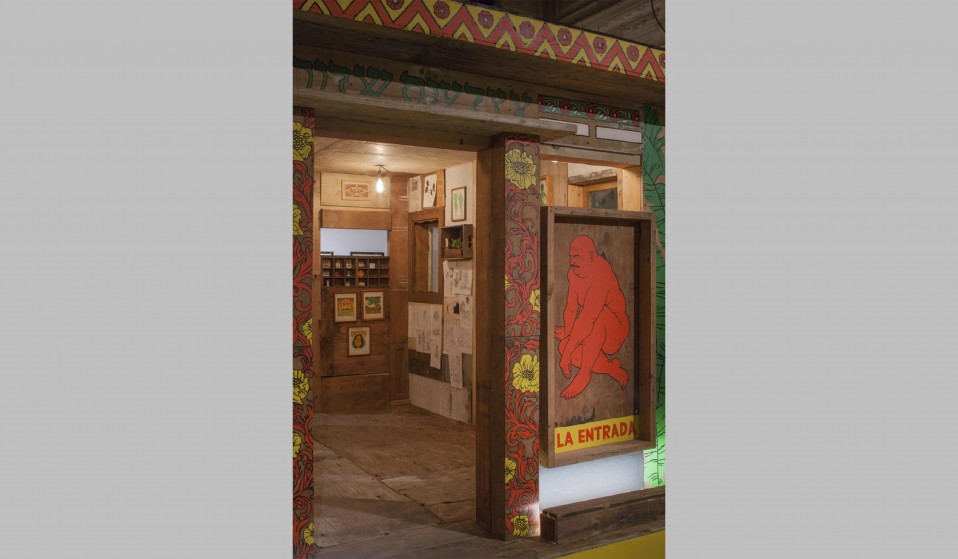 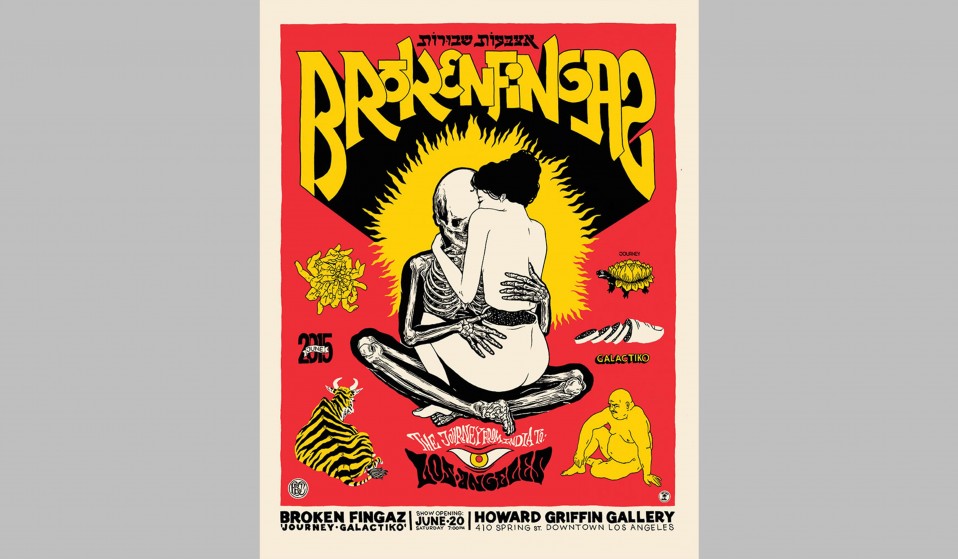 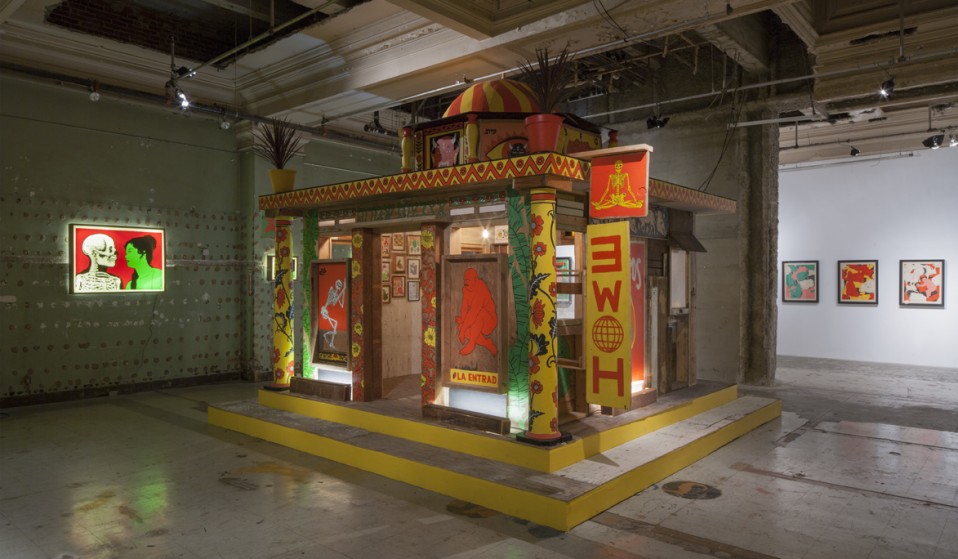 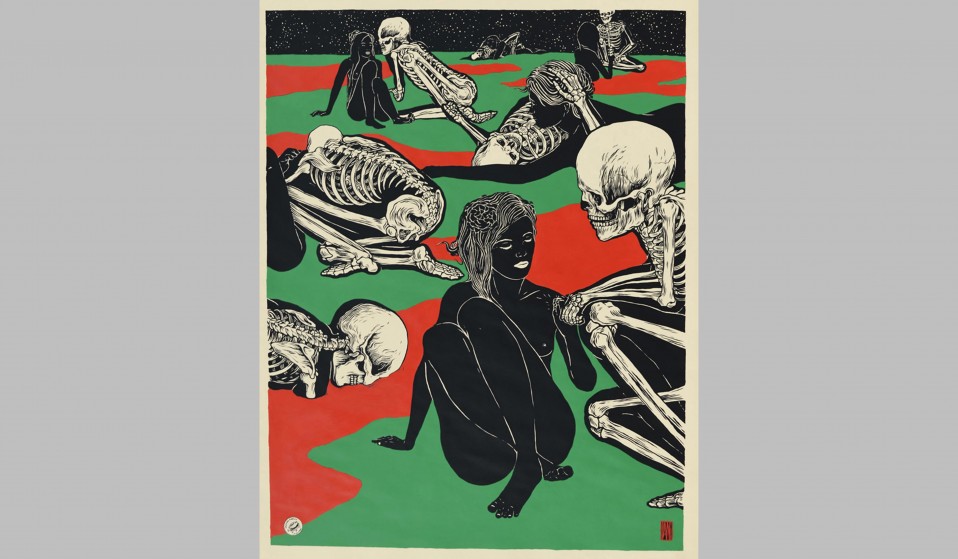 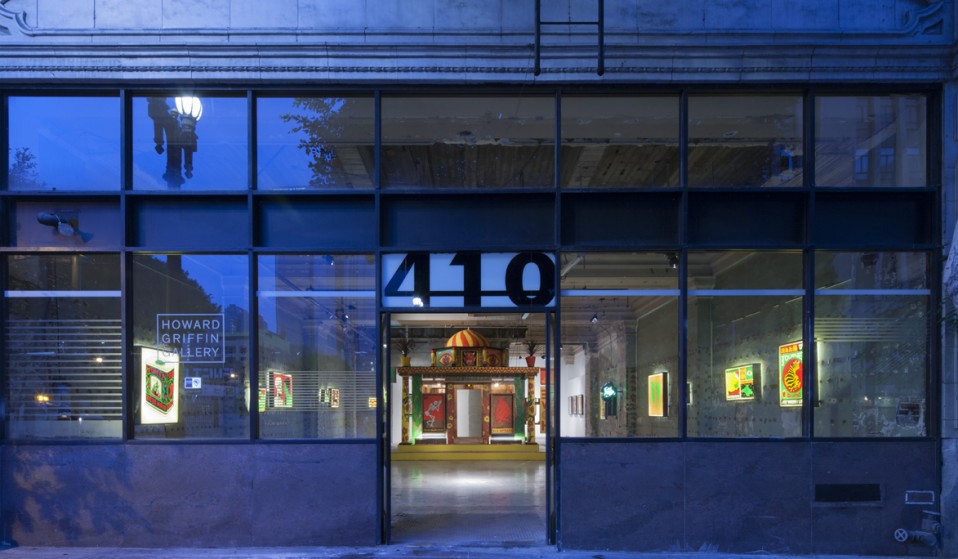 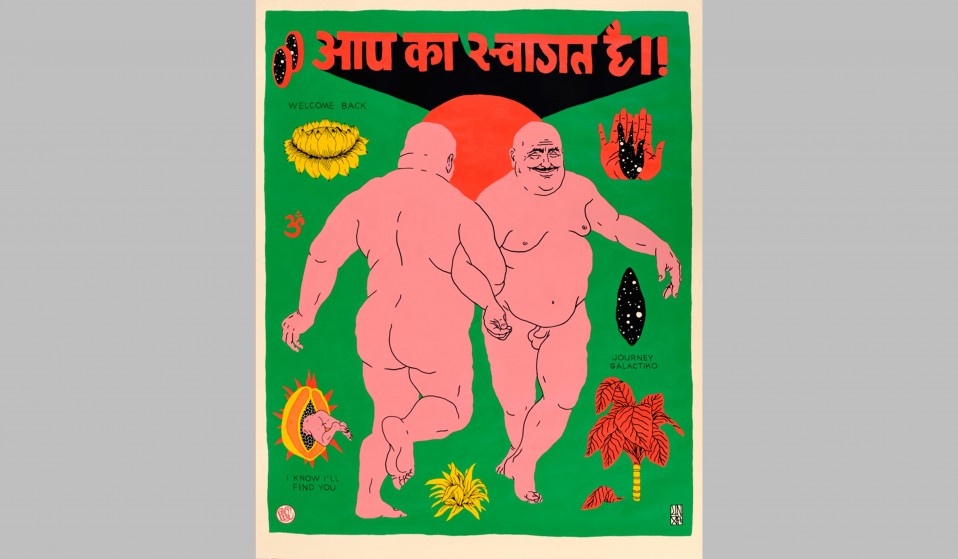 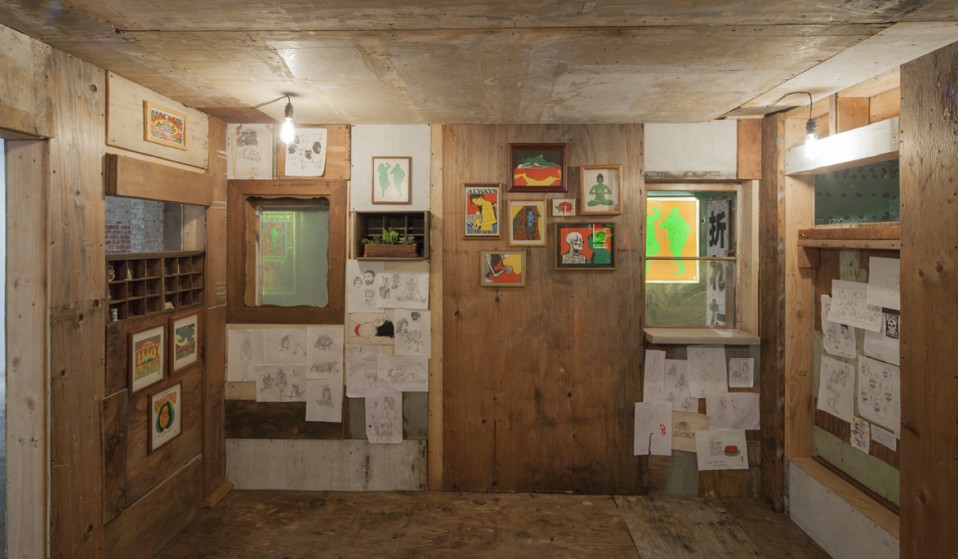 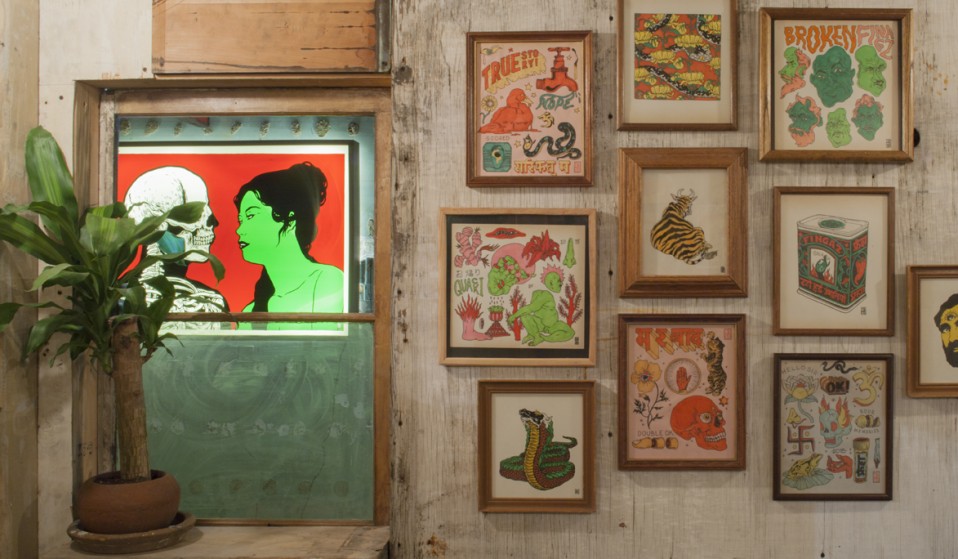 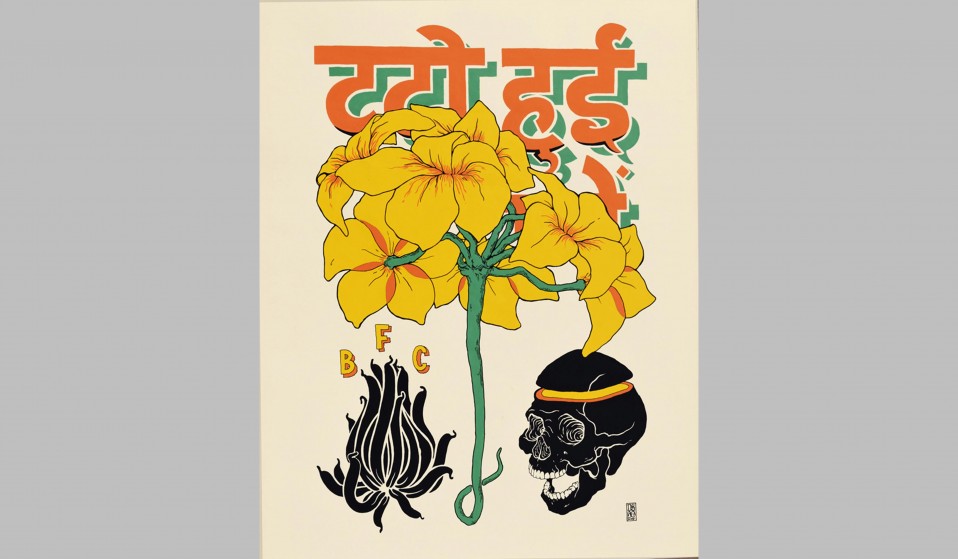 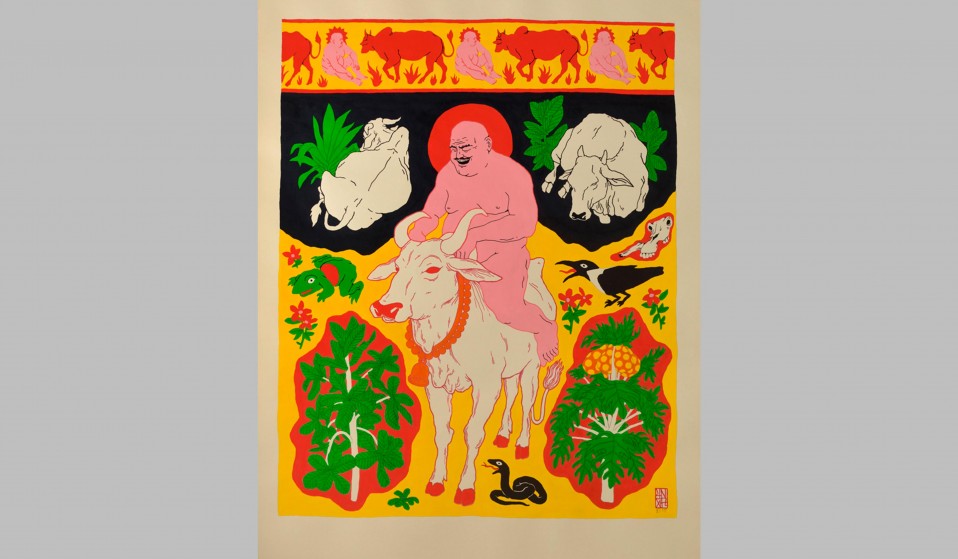 Underground graffiti collective Broken Fingaz spring up in LA for a mesmerising show that takes on sex, death, Indian spirituality and capitalist advertising.

Underground graffiti collective Broken Fingaz spring up in LA for a mesmerising show that takes on sex, death, Indian spirituality and capitalist advertising.

Haifa graffiti collective Broken Fingaz emerged from the Israeli underground in 2001, fighting their way out of the technicolour mishmash of rootless imagery surrounding them in a country which fits neatly into neither east nor west.

With acid pop colours, profanity and a willingness to travel, founding members Unga, Kip, Tant and Deso have attempted to make sense of their place in our globalised, image-saturated world.

Their new show sprang from a trip the crew made to Los Angeles, via the visual feast of street advertising and sacred imagery they discovered travelling through India.

Journey Galactiko centres around an imposing temple in the middle of the gallery space whose inner sanctum might offer sanctuary from the bombardment of hyper-commercial imagery – or something completely different entirely.

What were you hoping to find in India and how did you approach the trip? Did you always plan to create a show from the experience?
We didn’t come with many plans or a fixed idea but we knew we had a show and we wanted to try to disconnect ourselves from the western world for a few months. We decided on India because just from seeing Indian folk art, we knew that it must be a colourful place, we hoped that it would be something you could still see around you and that you wouldn’t have to go to a museum to see… When we arrived we were happy to discover that inspiration is all around you, from the packaging of the medicines in the pharmacy to the hand-painted shop signs to the goddesses in the temples. Everywhere is just colourful and psychedelic. When you are there it naturally becomes a part of your art, you don’t need to think about it; it’s just there.

Were there any moments or special people that stood out on the trip?
The first morning in India was really strong… We arrived in Mumbai in the middle of the night and we didn’t have any place to stay, so after a few guest houses refused to let us in we decided to just go to sleep on the street. In most places you’d be woken up by police telling you you can’t sleep there or by someone trying to rob you but everyone was just coming to offer us chai and weed. We really felt like we woke up on a different planet.

Graffiti and advertising share a lot of common features and have influenced and borrowed from one another over the last couple of decades. Right now, who’s leading the creative charge, graffiti artists or advertisers?
Most ads are really ugly and most graffiti is also really ugly. But at least graffiti doesn’t try to sell you stuff. They will forever influence each other. We have met a lot of hardcore bombers who nobody knows does ads for Nike or whatever during the day. If you’re good then you can channel it in more than one way. It’s kind of up to each person whether they want to take part in this game.

What effect do you hope the show will have on viewers? What do you want people to walk away with?
We really hope people will get the chance to take great selfies with our work…. No, but really. We hope that it will be an experience that will leave people with something, even small. It’s not like a specific message we’re trying to deliver but more of an overall approach and energy.

Linkedin
RELATED ARTICLES
OTHER ARTICLES
Photojournalist Fiora Garenzi spoke with people still living in Eastern Ukraine, an area which seen some of the heaviest fighting since the war began.
The author discusses her new memoir, which offers a sobering reflection on the racism and otherness she’s experienced along with a joyful celebration of her culinary heritage.
A series of photos by the late Jerry Dantzic taken in 1957 show a tender side to the iconic Jazz musician.
Photographer Bud Glick recounts documenting everyday life in the area, and what it taught him about the Chinese immigrant experience.
Last week, Tower Hamlets council removed its nudity-restricting licensing conditions in a huge win for London’s kink community.
A sharp increase in officers armed with the electrical weapon is resulting in serious injuries and deaths.