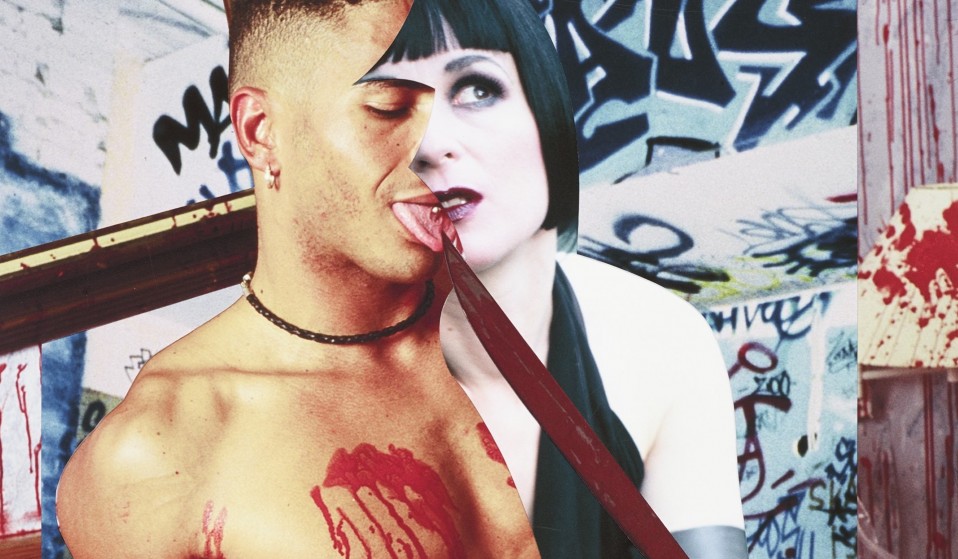 Ahead of his first UK exhibition, iconic queer filmmaker and artist Bruce LaBruce talks taboos, personas, and staying in your discomfort zone.

Ahead of his first UK exhibition, iconic queer filmmaker and artist Bruce LaBruce talks taboos, personas, and staying in your discomfort zone.

Bruce LaBruce’s work is – to put it lightly – divisive. His films have been picketed and banned, his exhibitions threatened with closure, and his artworks almost destroyed by hyper-religious Christians.

It was to be predicted, really – Bruce’s works tend to address the more extreme sides of sexuality; his muses and protagonists being zombies, reprobates, skinheads and misandrist schoolgirls. Bruce’s work, both onscreen and on paper, embraces the unacceptable openly. It puts the visceral, sometimes ugly, reality of human sexuality into a universe of fantasy. Safe to say, his creations are not here to cater to the faint of heart.

“It’s not always easy, but ultimately you just have to be able to defend your work,” he tells me, when asked about how to handle criticism. “As a filmmaker or artist, I always look for that discomfort zone. I push myself into areas where I’m feeling uncomfortable about what I’m representing. That’s when I know I’m in that sweet spot for me, artistically, that I’m really pushing.”

“At the same time, that is a scary space – one where you’re questioning yourself: Should I be doing this? Am I going too far? What am I actually saying? I definitely have pushed myself to places where I thought I’d gone too far, but then ultimately – you smelt it, you dealt it.” 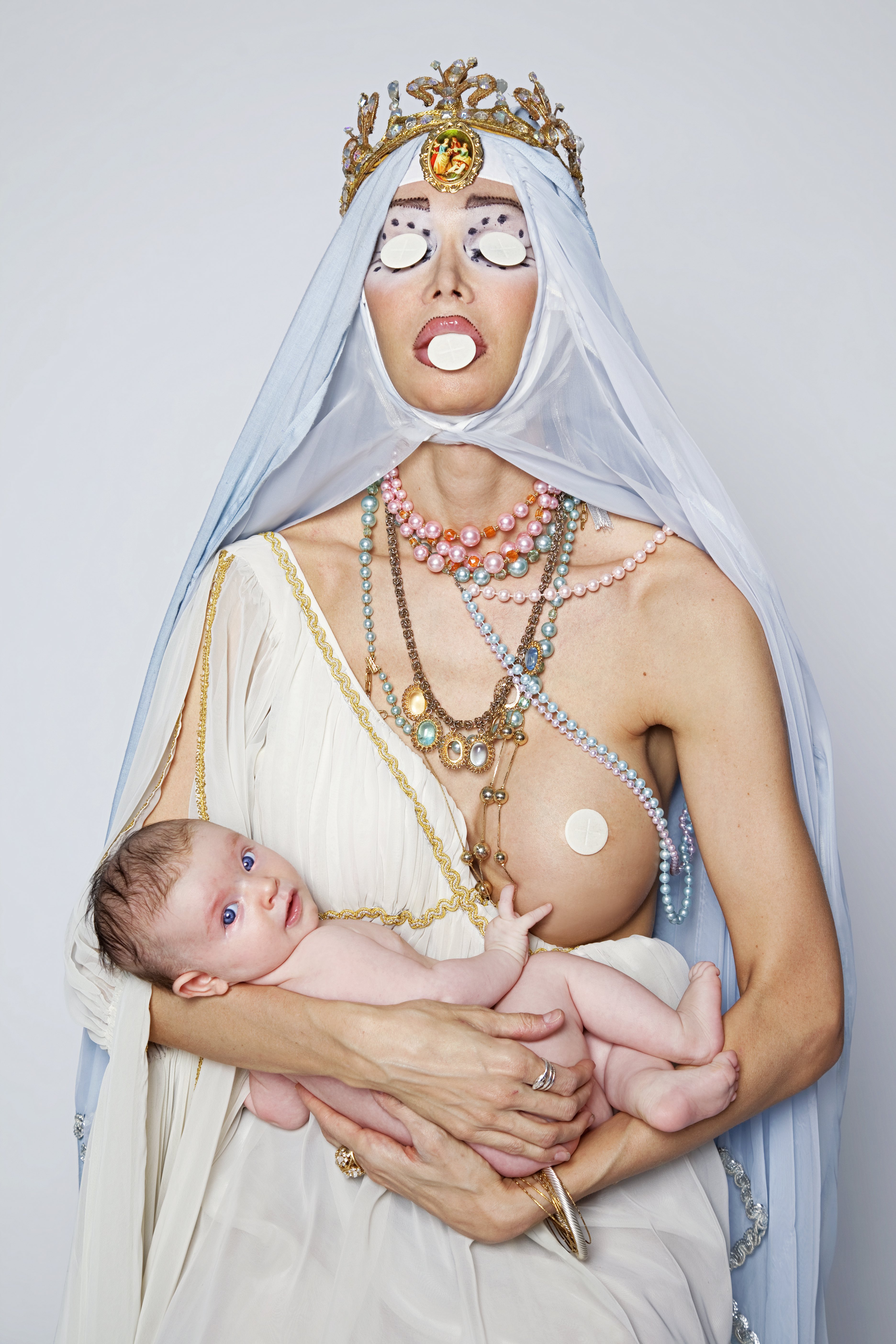 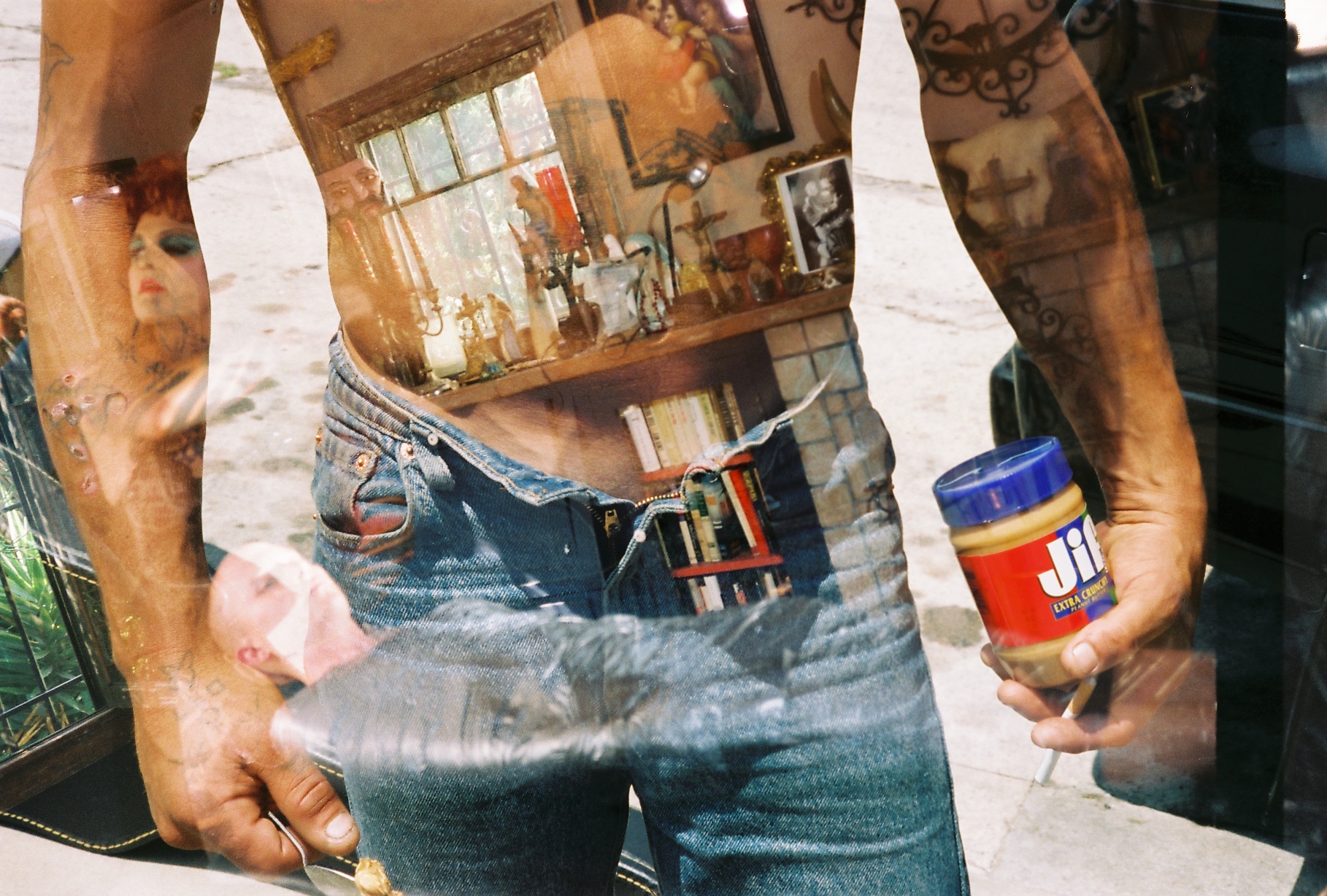 Currently on his way to opening his first ever UK exhibition, Bruce – who self-identifies as a “reluctant pornographer” –started his foray into the world of film during the mid-80s, making super8 experimental shorts and queer punk fanzines in Toronto, Canada. One of his zines of the time, J.D.’s, co-published with artist G.B. Jones, rose to notoriety and became known as one of the catalysers of the queercore movement – which challenged both the heteronormativity of the punk scene and the mainstream classism of the LGBTQ scene.

“I think it [my initial attraction to punk] had to do with queer identity,” Bruce says. “I didn’t feel I fit into the mainstream gay world, which I found very cliquey and bourgeois and white middle class. I was from a working-class background, so I gravitated more to these punk anarchists who were fighting against all sorts of institutions and corporate interests.”

It was while he was exploring his identity that the persona of Bruce LaBruce was born –  a punk character invented by the filmmaker, whose honest-to-god registered name remains a mystery. Created out of necessity, to legally protect himself at a time where shipping pornography across state lines was severely frowned upon, the character LaBruce also helped the filmmaker create a necessary divide between the private and the public aspects of his life – but not without going through what he calls a “mini nervous breakdown” first.

“It got a bit schizophrenic – I ended up interviewing myself in a few magazines. I was losing track of my core identity,” he explains. “My film, Super 8½, is partially about that, about losing track of where one ends and the other begins. Because I was performing sexually on my early films, or because my persona was this out of control, hard-partying, super political queer punk, people would make a lot of assumptions about me, but the reality was much more mundane. I was just introspective and a little socially awkward.” 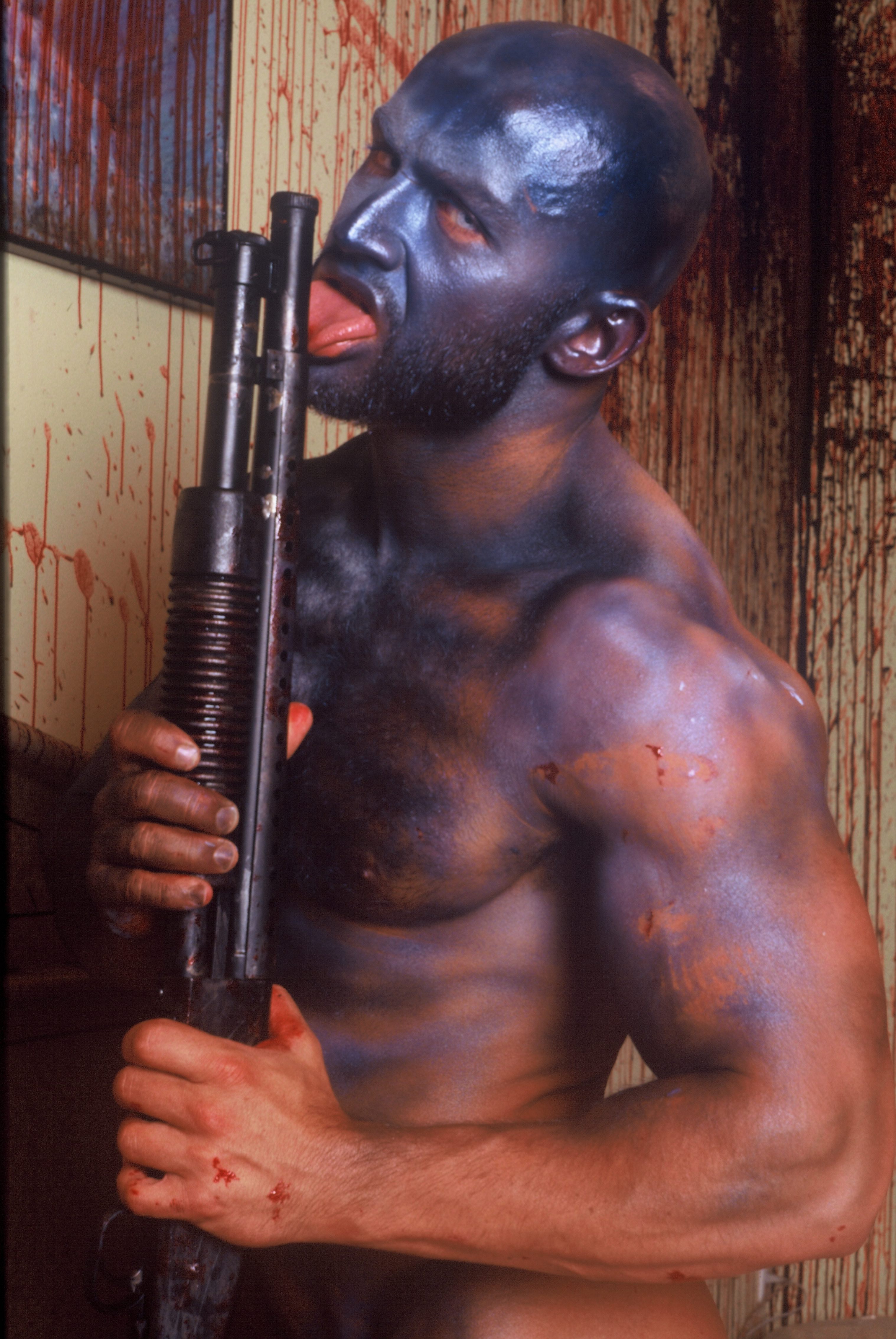 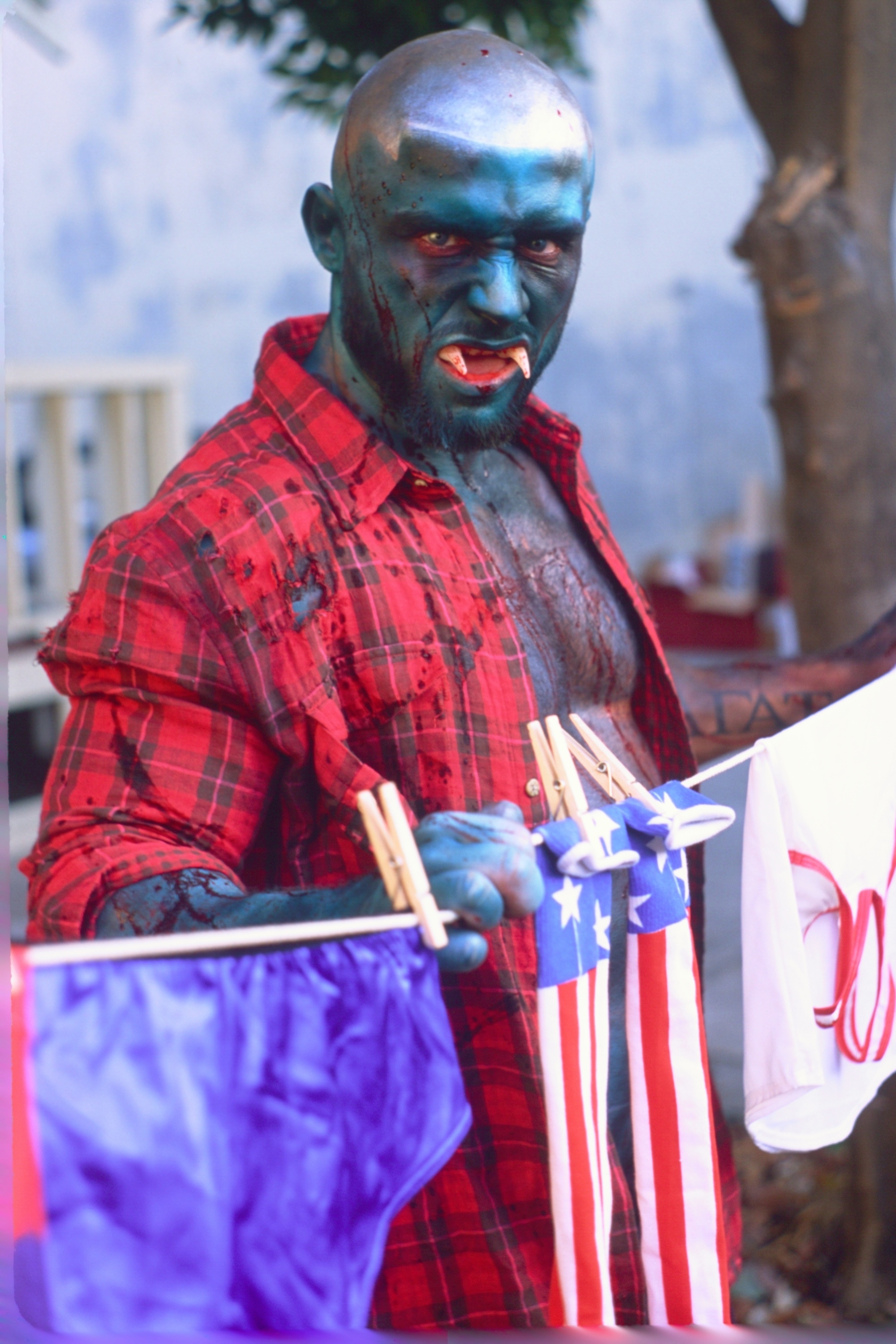 Bruce’s relationship with the punk scene went through many shifts – from being accused of selling out by friends for spending $14,000 on his first feature film, No Skin Off My Ass back in 1993, to today, where he incorporates the values he learnt when tackling sex and fetish in his current artistic practice. His work oscillates between direct statements and implied meanings.

“Even if I no longer feel directly connected to any kind of scene or political movement, I do still feel like I have a strong punk ethos – which is when you have a very strong style and aesthetic, and you do have a political stance, but it’s expressed more in style and very much in terms of both ambiguity and ambivalence,” he explains. “Ambiguity in the sense where the work is open to interpretation: A lot of times people are not sure whether or not my work is to be taken seriously or if I’m being sarcastic. In fact, quite often, a key to my work is: if you think I’m being sincere I’m actually being sarcastic, and if you think I’m being sarcastic I’m actually being sincere.”

For Bruce, pornography, fetish and sexuality ended up being the chosen avenues through which he addresses his aforementioned ambivalence. Using an extremely human, sometimes unpleasant lens, the narrative is key to explore aspects of fantasy and morality that exist in the cultural landscape but are often left unspoken. Through clear tropes – like nuns, dominatrixes, zombies and saints – Bruce offers his own, sometimes veiled, perspective on the zeitgeist. 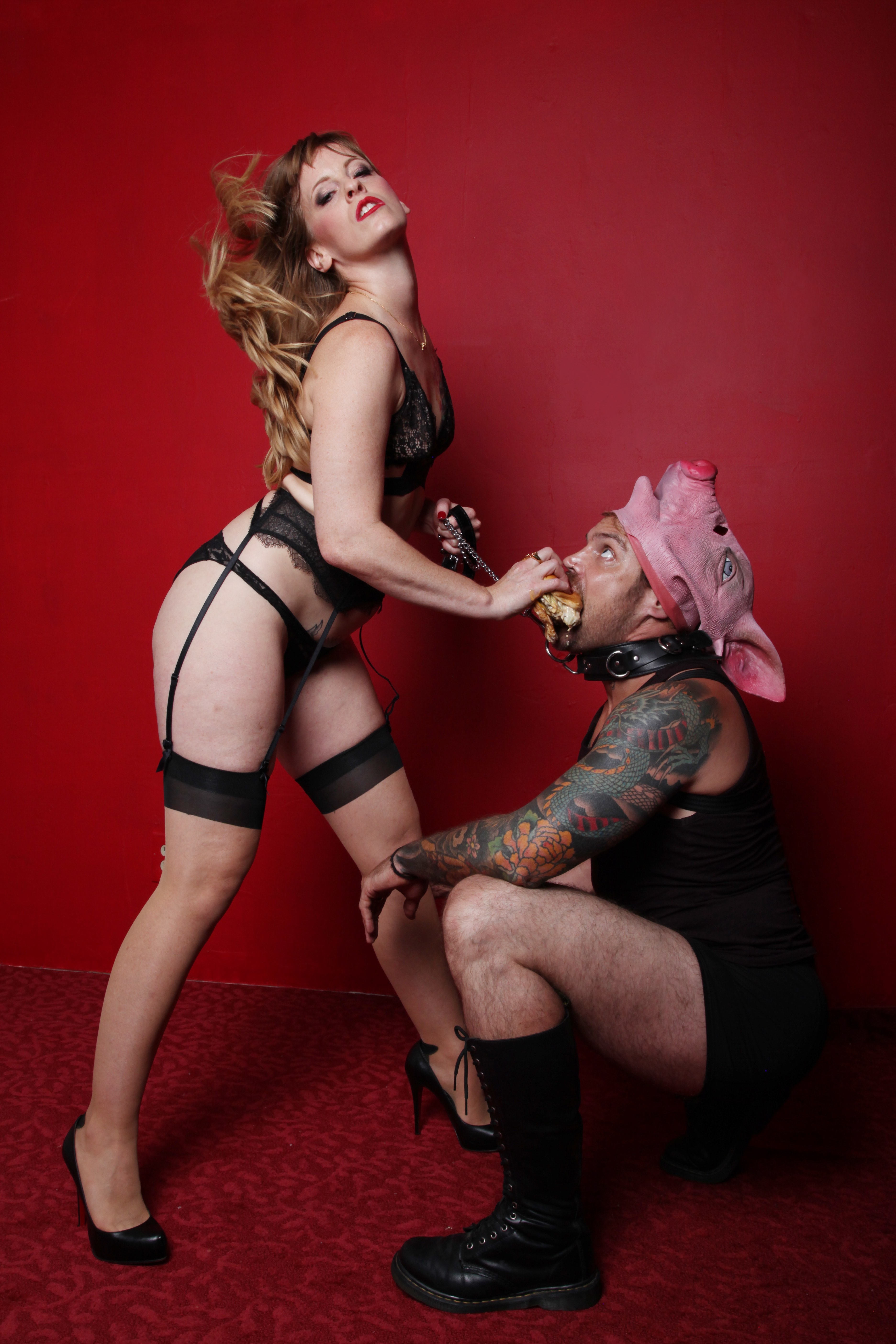 It is also fundamental to note that, although that exploration can be uncomfortable for viewers, Bruce’s priority as an artist is always on respecting the limits of his actors – one of the rules he had set since the beginning being never asking an actor to do something in front of a lens that he himself would not do.

The Haus of Bruce LaBruce is on from October 28 to November 12, at Gallery 46 in London.

Linkedin
RELATED ARTICLES
OTHER ARTICLES
As she gears up for the release of her first book, the 24-year-old climate activist talks standing up to authority and building a more inclusive movement.
The action took place in response to the 200 asylum-seeking children who were placed in hotels run by the Home Office who have gone missing.
At his West Bank restaurant, Fadi Kattan established himself as the voice of modern Palestinian cuisine. Now, he’s bringing his innovative, bold flavours to the UK’s capital.
Theo McInnes’s photos of the annual event provide an intriguing snapshot of contemporary Britain.
Filmmaker Laura Poitras discusses her new documentary which traces the remarkable life of the artist-activist and the impact of her battle against the US opioid crisis.
A new podcast is opening up the conversation between trans women and trans amorous men in the hope of building coalitions.