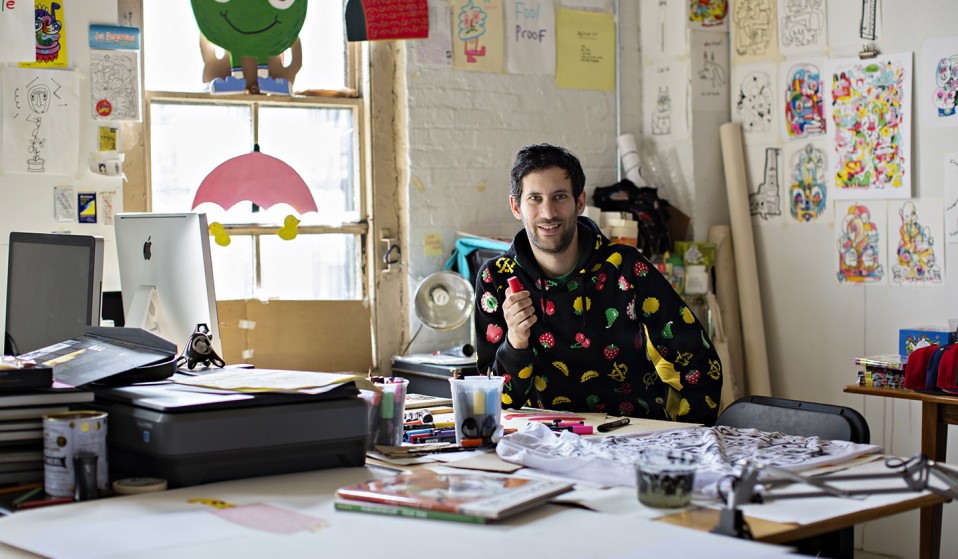 Huck catches up with British-born Jon Burgerman in his Brooklyn apartment to find out why he's hell-bent on rescuing art from its own self-serious vortex.

Huck catches up with British-born Jon Burgerman in his Brooklyn apartment to find out why he's hell-bent on rescuing art from its own self-serious vortex.

An Englishman in New York, Jon Burgerman is not an alien so much as from another planet. The eccentric British artist cross-steps around all mediums, producing a prolific array of cartoon-coated solo shows, murals and performance art pieces for establishments both high and low. His wild sense of humour has been taken very seriously, from London’s V&A Museum nabbing pieces for their permanent collection to delivering creative workshops at festivals around the globe. And now, having just collaborated with Pull-In Underwear, there are even Burgermans on butts.

But it’s his public interventions that are really spinning heads – like Head Shots, a parody of Hollywood violence that saw Jon photographing himself having his brains blown out in front of action movie billboards. So is there method to his squiggly madness? Jon let Huck into his cranial notebook to chat art, life and the power of funny cats.

You’ve made a fine art career out of the humble doodle. How?
Like many young people, I had a lot of energy once I was free from the heavy institutional cloud of the British education system. I didn’t need much inspiration. I was less worried back then because I had no idea what was out there, in terms of possibilities or limitations, I only started to feel stuck as my career progressed and I began to over-think everything. Sometimes less thinking and more doing is preferable.

Are your characters based on people you know?
Everything comes from something. I think the people I see and meet go into my brain and through a Jon-filter and come out as my characters. I’m a big fan of people-watching and, for fun, silently judging them. That’s a joke. Sort of. But I do like to imagine their backstories. That’s how I pass the time at airports.

If you were being people-watched, how do you think you would come across?
I’m quite normal in public, if a little nervous. When I get excited I talk a lot, get very animated and flap my arms around wildly, so perhaps people would think I’m on drugs?

Does being an outsider in New York give you a fresh perspective that filters into your art?
I think all artists are outsiders to some degree. But yes my perspective has definitely evolved living here. I’ve seen a lot of stuff I’m not familiar with, and it’s kept my brain buoyant and my ideas nimble, which I think has been beneficial to my wellbeing overall. Wellbeing is the main thing I aim to achieve.

Do you go through the same process, whether you’re working on a fine art show or commercial project for brands like Pull-In?
The artwork we used for Pull-In’s underwear came from a print I made called City Girl, which was about the energy, noise, confusion and fun of living in an urban mega city. It’s crazy that people’s most private body parts will be snuggling up against my artwork, but that strangely turns me on a little. Many people have my work tattooed on their body and there’s no greater compliment I can think of. It’s like they’ve adopted a child of mine and will see it every day as they get older, for the rest of their lives.

You participated in the Imagine Children’s Festival at the Southbank Centre and produced work inspired by children’s drawings. Why do you think some people lose their playful creativity as they grow older and how do you hold onto it?
There’s a purity and joy in kids’ work that’s impossible to fully replicate as an adult – we are too lumbered with self-knowledge. All we can do is distract ourselves and try and work in ‘the moment’, becoming children briefly once again.

You say your work is largely spontaneous – why do you feel the need to keep things off-the-cuff?
I think that’s how my brain is wired. I think and make at the same time. It’s a dance, a song, a riff, a jam, an improvisation all at once. Only when I’m not fully concentrating can I surprise myself and create something unexpected – unhindered by my awareness of being me. As the great twenty-first century philosopher Eminem said ‘Lose yourself’.

You often create animations or fictional work that engages with the real world, like subverting movie posters or cartoonifying commuters – do you think art is more powerful in public than in a gallery?
Art is powerful, whether in a gallery or not. The idea, for me, is that art is about describing a world, a view or an idea and inviting others respond, share and continue with that thought. It’s the original open-source language.

Since moving to New York, you’ve been experimenting more with public interventions. Street artist Swoon once told us, “By putting a little tiny change in an environment you can change all the associations people have and create an opportunity for connection?” What connection were you trying to affect with your billboard project, Head Shots?
I love that Swoon quote. My billboard project started off with the notion that by suggesting different ways to view the world around us we can begin to see things differently, and in turn change our worlds. The project then took on a new direction as all the posters featured violent imagery – why is so much violence displayed in our public spaces and how is that affecting us? It was meant to be a funny project but with a serious question attached to it.

Is wit an underrated force in the art world?
Humour probably is underrated even though there are a lot of artists for whom humour plays a large role in their work. The only problem with being funny is that sometimes people tend to not take your work seriously. I think humour is one of the best vehicles for an idea; you can say meaningful things – just look at South Park. The world is so punishingly cruel that you have to laugh if only for relief. My brother laughs when he doesn’t know what emotional response to give a situation, which in itself is funny to witness because it’s awkward.

Who do you feel uses humour well in their work?
People like David Shrigley, Maurizio Cattelan, Ai Weiwei, Kris Martin, Jeremy Deller, Martin Creed, Richard Prince, Jeff Koons, Peter Fischli and David Weiss all make works that are funny, or have a darkly humorous side to them. But outside of art, I love comedy – I’m a big fan of Andy Kaufman.

Should art always elicit a response from the viewer?
Art doesn’t need to have these things but of course it’s great when it does and when it works. When people laugh it’s a guttural reaction they cannot contain, so there’s something powerfully honest in it. I think it’s amazing when humans from different places all find the same thing funny, like cat videos on YouTube – it unites us. The power of humour is that it makes us relate, it invites us in, and then you’re part of the work, too.

Linkedin
RELATED ARTICLES
OTHER ARTICLES
A homemade video by The Gonz of him painting a new piece of art.
Swoon’s street art may be designed to fade away, but the trail it leaves behind is far from fleeting.
Design icon Geoff McFetridge talks plain and simple sense.