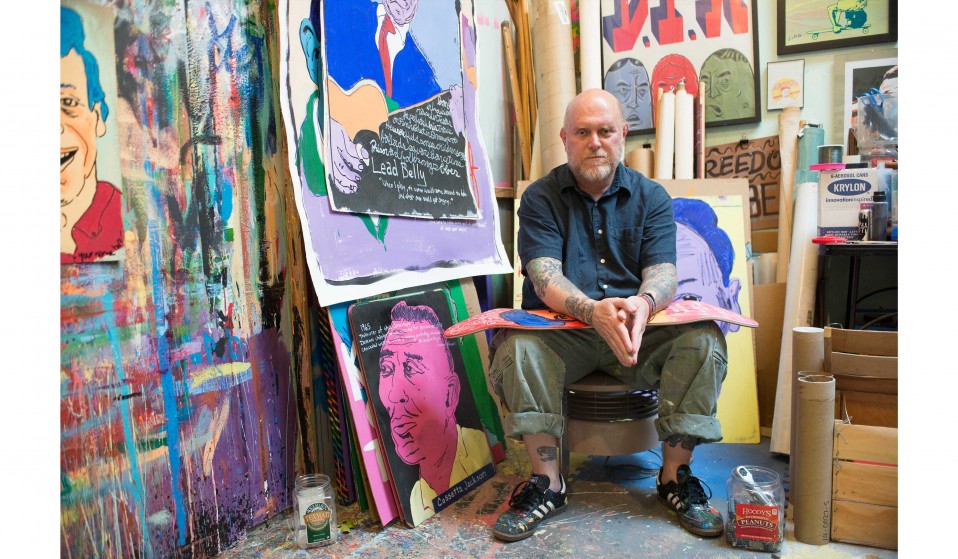 As a formative influence in independent music, Big Boys founder Tim Kerr helped to develop styles varying from punk-funk to skate-rock. Yet the artist has always resisted categorisation, repeatedly asking: 'If self-expression has no boundaries, why do people keep putting labels on it?' This is the story of Kerr's journey as an artist and the responsibility that comes with it.

On a quiet street just blocks away from Austin’s North Loop, Tim Kerr’s home is crammed with tokens of a life richly lived within the DIY underground.

He casually points out a pair of Misfits skeleton-gloves sitting atop a pile in the corner – a keep-sake from a visit by Glenn Danzig.

On the living room wall hangs the original cover art for Minor Threat’s classic Out of Step LP – a gift from the artist, Kerr’s friend Cynthia Connolly.

The house could be a punk-rock museum. Yet it overflows with piles of brand new books and records. Old show posters can be found alongside recent artwork by Chris Johanson and Barry McGee.

An acoustic guitar leans against a wall and, while we talk, Kerr grabs it several times to show me new music he’s working on.

Standing there amidst it all feels like stepping into a river flowing with underground spirit, one that stems far beyond the inception of punk and winds towards an undetermined future. 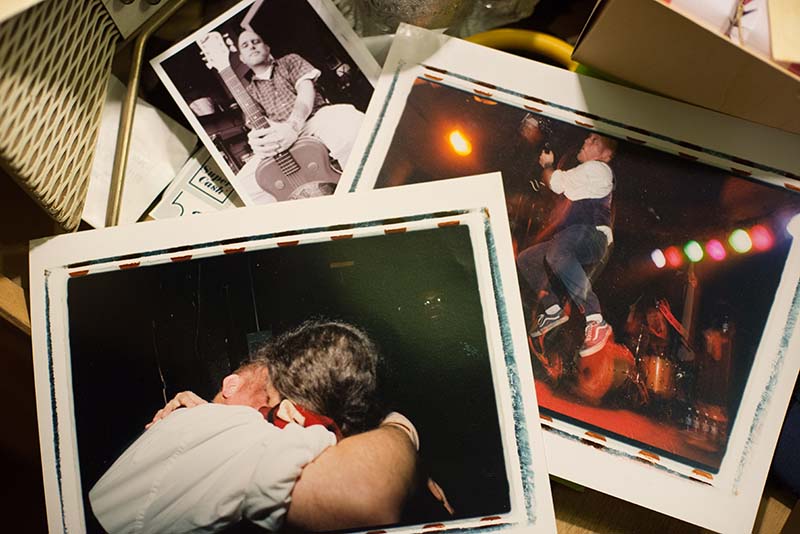 Back in Texas during the mid-1970s, there were few choices for a teenager yearning for something more than college football and country music. Looking for any form of self-expression, Kerr and his friends would take road trips around the state in search of small-town skate spots.

“It was ‘pre-punk’, I guess,” says Kerr. “It was just all the weirdos together in one tiny scene. We didn’t sit around a table and say, ‘What are we going to do to be punk?’ We just did what we wanted to do.”

When a clearer concept of punk finally began to filter down to Austin from bigger cities, Kerr and his friends embraced the new movement – not so much for its style as its spirit. “We saw that in punk, the crowd was just as important as the people on stage,” he says.

Kerr and his skating buddy, Chris Gates, decided to start a band called Big Boys in 1979. Along with groups like the Butthole Surfers and the Dicks, they would pioneer a wild and provocative brand of punk unique to Texas.

Rather than limit themselves to three distorted chords and the anti-Reagan sentiment popular at the time, Big Boys favoured a danceable sound that often veered into infectious funk.

Fronted by the openly gay and utterly fearless Randy ‘Biscuit’ Turner – who was known to taunt University of Texas frat boys and local rednecks from the stage while wearing a tutu and makeup – Big Boys channeled joy above all else. Entire audiences would be invited onstage to dance and sing along to classics such as ‘Fun Fun Fun’ and ‘We’re Not In It To Lose’.

Since the breakup of Big Boys in 1984, Kerr has restlessly explored various musical styles ranging from gospel-inflected garage rock to celtic folk through bands like Poison 13, Bad Mutha Goose, Monkeywrench, Lord High Fixers and his latest project, Up Around the Sun.

As a visual artist, his paintings have been shown in museums and galleries around the world. Today, Kerr is something of a paradox: a punk legend who rejects the very label of punk, preferring instead to see his work as a part of the long history of DIY self-expression.

“I’m not stupid – I understand categories,” he says. “But when I started, some of these categories didn’t exist.”

While many punks didn’t know what to make of Big Boys’ genre-bending music at the time, the band has only grown in stature.

In recent years their records have been reissued by the likes of Light In the Attic, while the group is also the subject of You Can Color Outside the Lines, a new documentary tracing their skate-rat origins in the ditches of central Texas to their nationwide tours during the 1980s. 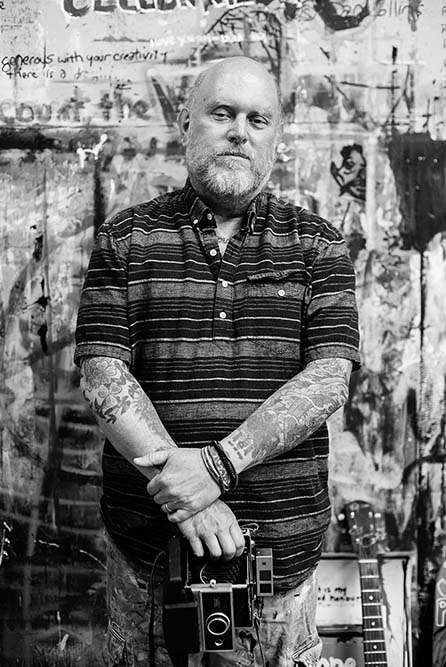 But for Kerr, the development of the band or even punk–rock itself always represented a contingency: the result of a desire for self-expression mixed with pure chance.

Kerr loves telling the story about how he and Gates flipped a coin in a skate ditch to decide who would play guitar in their new band. Kerr, who had already been playing guitar since elementary school, just happened to win the toss. His brighter style of playing and open tunings, filtered through the volume and intensity of punk, would help shape the band’s signature sound just as much as Gates’ propulsive bass.

“By the time I was in high-school, my guitar playing was heavily influenced by British folk along with David Crosby’s first record, John Martyn, Bert Jansch, Joni Mitchell, early James Taylor, etc. A lot of that music was played in alternative tunings and I got really into playing that way.

“Chris was really into things like Ted Nugent – really riff-heavy rock – so we would have sounded quite a bit different if he had played guitar. Let’s just say if Chris had won the coin flip, I doubt anyone would be talking to us about the Big Boys today!” [laughs]

So Big Boys’ classic hardcore sound was based on Joni Mitchell! [laughs] How punk is that?
“Well, eventually punk got a name. It got a uniform. But when it got rules, it had nothing to do with what we were doing. Chris has a good line in the Big Boys’ documentary about that. He says: ‘By 1983, it was possible to do punk–rock wrong.’”

Kerr’s quest to discover and create new things feels refreshing in an era haunted by zombified versions of ‘classic’ bands from different eras and genres – the ones who reunite decades after their initial recordings to tour the world and play their most popular records in sequential order. Sadly, Biscuit Turner passed away in 2005, so Big Boys can never play a true reunion show – not that they ever would.

“I call those [kind of shows] re-enactments!” says Kerr, laughing. “I swear, it’d be so great if they did the hardcore reunion shows like they do the Civil War re-enactment stuff. You could have everybody dress up in the same clothes they wore back then and play the same roles.

“They’d all have the Docs and the spiky hair and the chains. And then you’d have, like, three guys dressed as the three skinheads who would come and mess with everyone and ruin the show. All that shit! Let’s have the Civil War re-enactment of hardcore! I would go to see that!” 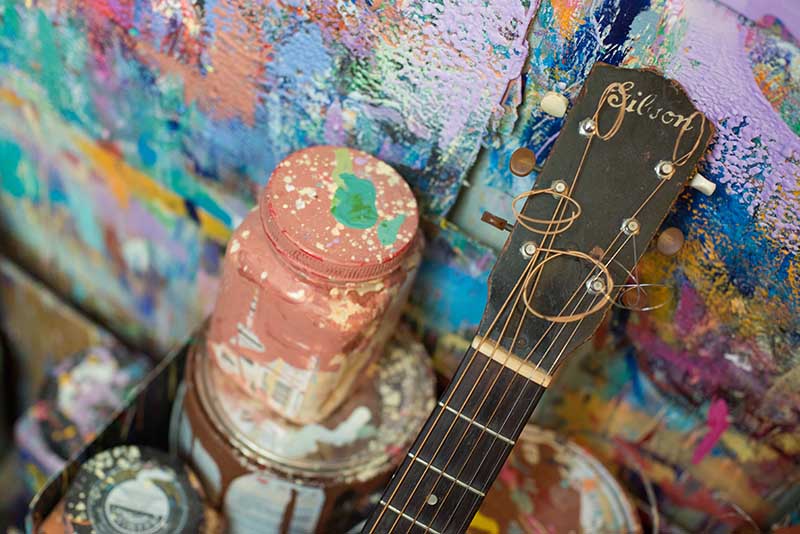 A free-standing garage in Kerr’s backyard, jammed to the ceiling with colourful scraps of his art, now serves as a creative studio. For Kerr, painting is an extension of DIY community – just like being in a band.

It’s become a way for him to travel around the world and meet new people. Kerr has no gallery representation and seems altogether unconcerned with pushing his art, relying instead mostly on word-of-mouth and invitations from friends of friends to exhibit.

During our conversation, Kerr prepares paintings for an upcoming show at the Rosa Parks Museum in Montgomery, Alabama. The exhibition came about after Kerr painted a portrait of six lesser-known African-American women who refused to give up their seats to white people on segregated buses before Rosa Parks made her famous refusal in 1955.

A friend bought the painting and posted a photo of it online. The photo happened to be seen by the director of the Rosa Parks Museum, who then offered Kerr a show.

“People who know me realise that this was a bigger deal for me than if I would have been asked to show in the Museum Of Modern Art,” says Kerr, mentioning the opportunity he had to meet Rosa Parks’ minister while in Montgomery. “Meeting him and all the people that were – and still are – involved in doing things for their community was inspiring and humbling. I was honoured to be there.” 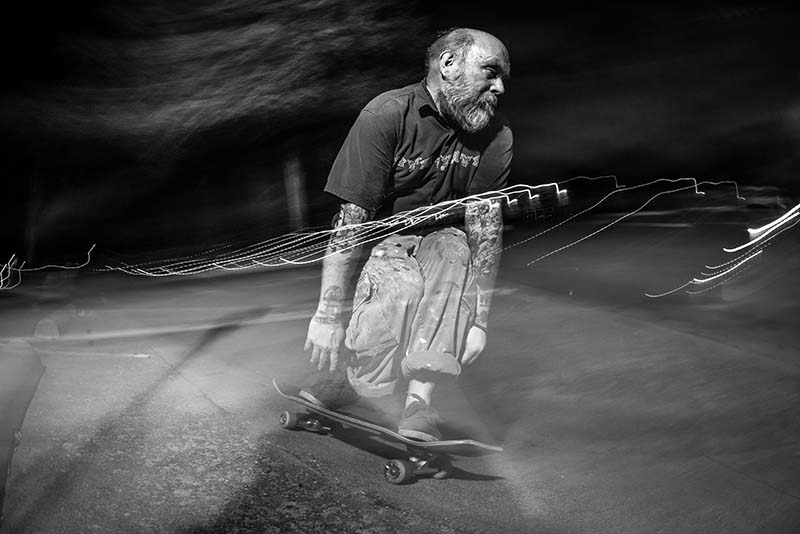 Given his passion for art, it’s natural to wonder if a tension exists between the reverence for Kerr’s storied past and his own desire to express himself anew through experimentation.

“For me, there’s no tension. It’s all ongoing. It’s all just one long piece of string,” he says. “I paint portraits of people who have inspired me through their words or actions in the hope that it plants a seed in the viewer to go out and discover their own self-expression, passion and history.

“Sometimes, when people want to talk to me about the old days of punk, I can tell they’re really excited. But when I start talking about what I’m doing now, I can see it in their eyes – it’s like a blank. That bugs me. How could you be that much into this thing I did a long time ago without learning what we were trying to say about living life?” 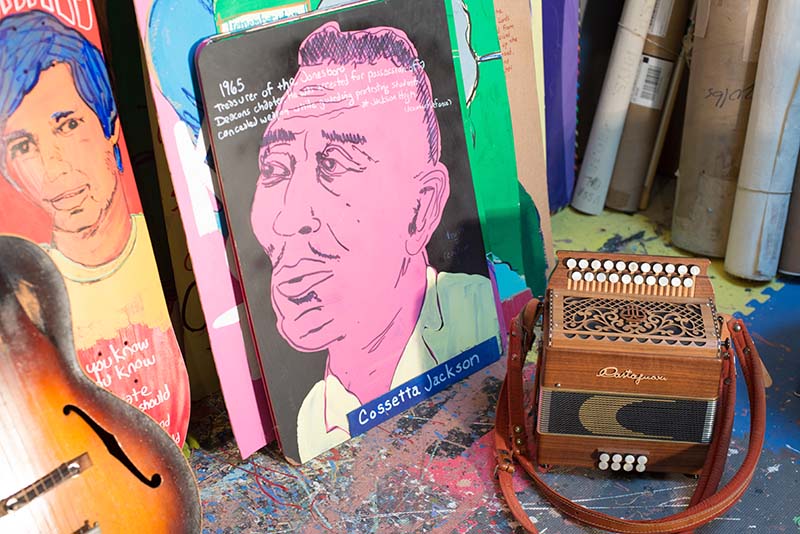 So how does what you see as the Big Boys’ message about life find expression in your painting today? Can you discuss why you choose the subjects you choose for portraits?
“The first painting I did when all this started, back in the early 2000s, was John Coltrane. I don’t think it was too long after that that I painted Rosa Parks, then Claudette Colvin, Jim Thorpe, Aretha Franklin, Jack Kerouac… The more I find out, the more people I want to celebrate. In my own way, it’s also a ‘thank you’ to them.

“My art starts from the idea that, whether we know it or not, we are all making history. You have no idea who you might influence or when or how you might influence them. To each their own… but I take that responsibility seriously and try to live my life as a positive influence.”

You often paint portraits of figures from the civil rights movement. How does that movement connect with your ethos or understanding of DIY culture?
“It comes from the same seed of not liking the choices you are given – so you make your own. Period.” 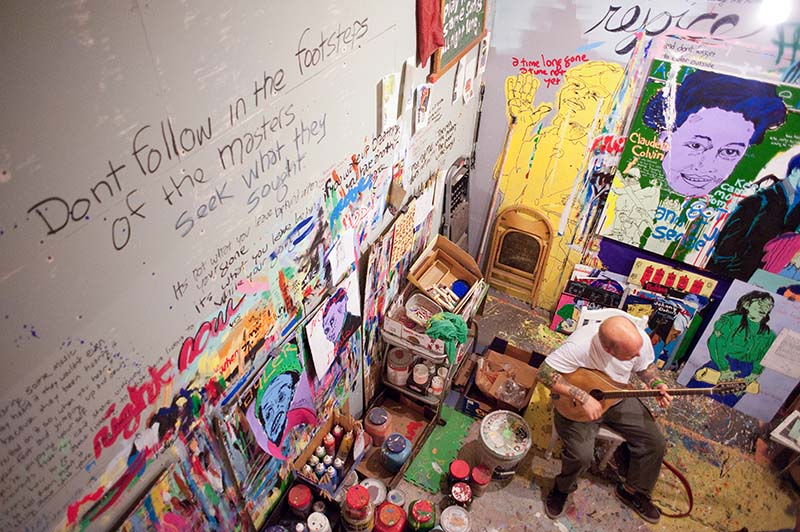 Standing in Kerr’s studio, taking notes on our conversation while he painted, my visit seemed to parody a kind of spiritual pilgrimage: the younger seeker climbing the mountain to seek wisdom from the old master… only to find that the master just wants to talk about anything else. It’s a dynamic that, for Kerr, brings a particular story to mind.

“A couple years ago during South By Southwest, Beth [Kerr’s wife] and I went to this late night punk party at a house over by the tracks. All these bands were playing there and it was really going off: people dancing and singing along; just a great, packed gig. So when [those] people ask me what the old days were like, I say: ‘It was exactly like what you’re doing right now.'” 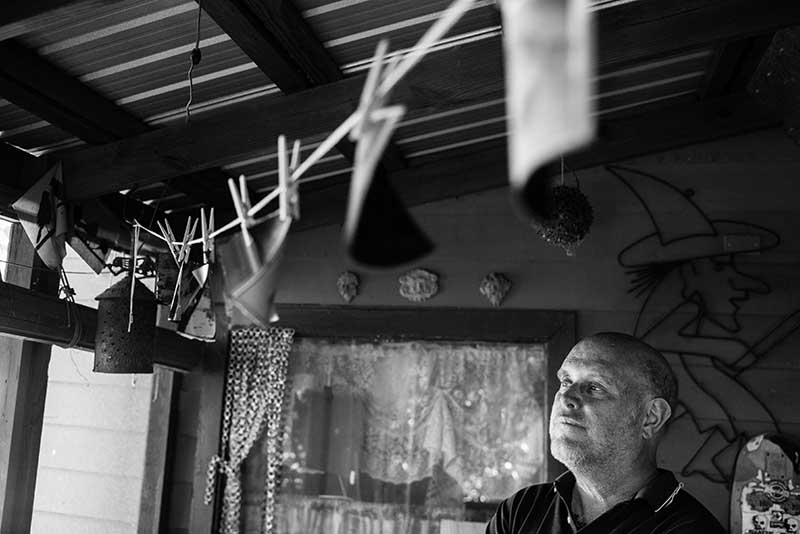 Linkedin
RELATED ARTICLES
OTHER ARTICLES
In our first OFFF Dispatch piece, the Arce Studio founder shares her tips on standing out from the crowd.
The revered showbiz chronicler recalls his journalistic beginnings, documenting subcultural scraps in the ’80s.
After news broke last week around an expected reversal of the 1973 landmark law that made abortion legal in the US, protestors gathered in the UK in support of American women.
Over the weekend, London locals came together to resist a pre-planned police raid targeting delivery drivers.
Following the release of his latest album God Don’t Make Mistakes, the rapper talks horror villains, police brutality and being unafraid to show his vulnerable side.
The situation in Afghanistan remains dire, with many groups facing persecution at the hands of the Taliban.