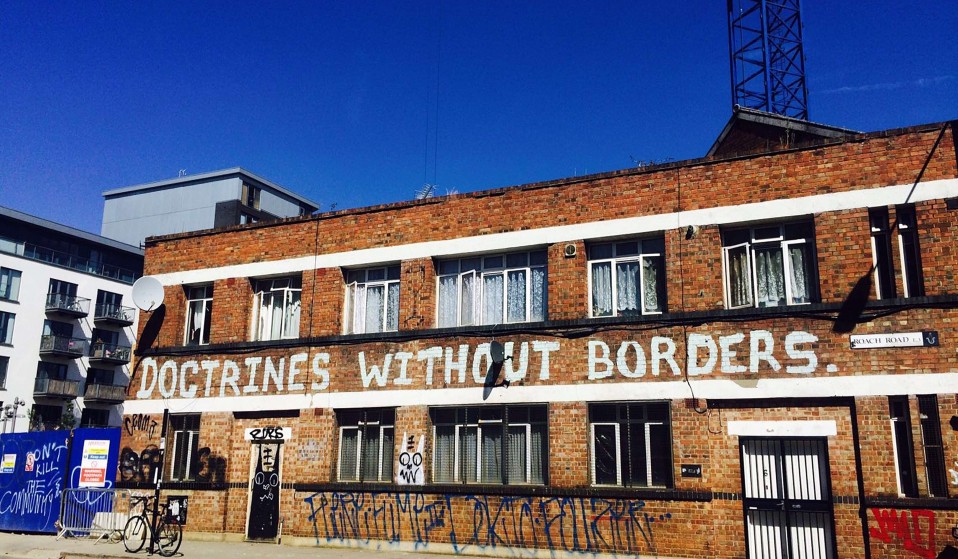 Between London and Chicago, street artists Dont Fret and Edwin are turning their Whatsapp exchanges into pointed political displays scrawled across each other's cities.

Between London and Chicago, street artists Dont Fret and Edwin are turning their Whatsapp exchanges into pointed political displays scrawled across each other's cities.

Over the last year or so, text messages between Dont Fret and Edwin – two graffiti artists from Chicago and London respectively – took a turn towards the political.

But where most people would prefer to keep their Whatsapp conversation private, the pair splattered their exchanges on public walls, making us all spectators of their socially conscious “observational commentary”.

Along the way, the refugee crisis, Brexit and the US election gave the project added urgency.The highlights are documented in their book The Distinct Sound Of Laughter In The Distance, which aims to the reflect not just the personal, social and political thoughts of the artists, but of the wider population on either of the Atlantic. 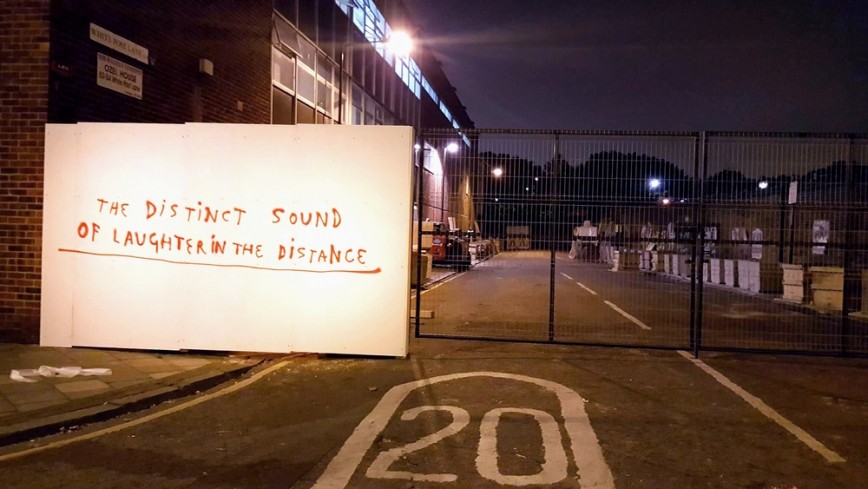 Tell us the origin story: how did this collaboration start?Dont Fret: I came to London in 2015 and didn’t know anyone. In what would prove to be somewhat ironic, Edwin and I had communicated a few times through the internet, so I asked him if I could stay with him for a few days and make some work.We ended up finding so much common ground – revolving around graffiti, street art and friendship – that I ended up staying with him for almost three weeks. We did a lot of work together in the streets and when I finally returned to Chicago, we continued to keep in contact and brainstorm future projects.

How do your exchanges make the jump from your smartphones to walls?

Dont Fret: It was a little different every time but essentially I would think of a phrase or text, then send it to Edwin via Whatsapp. Edwin’s task is to graffiti the text in London, and vice versa for me in Chicago with Edwin’s text. It could be a tag, a roller, a marker tag.

In most cases we were both totally open to interpret the other’s text and to re-contextualise it based on our own execution.

As the project became more political, following the events of 2016, a lot of Edwin’s text interpreted what’s happening in America from an outsider’s perspective, while mine interpreted Brexit from afar. 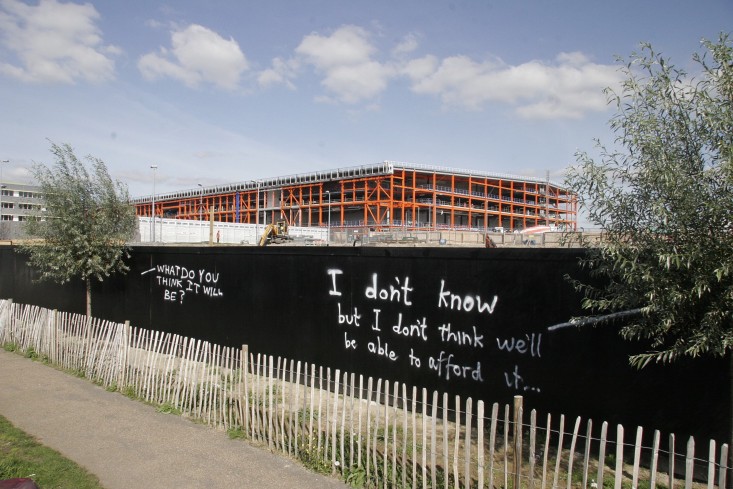 You finished the book before Trump became president. How has the US election influenced or changed the project?

Dont Fret: In the simplest sense, Trump and his cronies certainly provided some content (“Alaska Is Pretty Far Away”) and a few laughable lines.

But what began as sort of a “graffiti pen-pal project” and a bit of fun suddenly seemed like an important opportunity to talk about what’s happening in the world, both as two international artists and just as two friends going, “What the fuck?” an ocean away [from each other].

Also I think it was important that the project promoted international dialogue in a time when the powers-that-be seem to be keen on pushing a nationalistic, anti-immigration platform.

Which message from the other most struck both of you?

Dont Fret: I don’t know why, but writing Edwin’s “Jewelry Of A Dead Relative” in a Chicago neighbourhood where people are selling 100-year-old buildings for millions of dollars before knocking them down to make way for cheap condos felt oddly fulfilling and appropriate.

Edwin: For me, Dont Fret’s “Dark Times” was an obvious standout. Personally, socially and politically it had – and still has – a strong resonance to both of our situations. 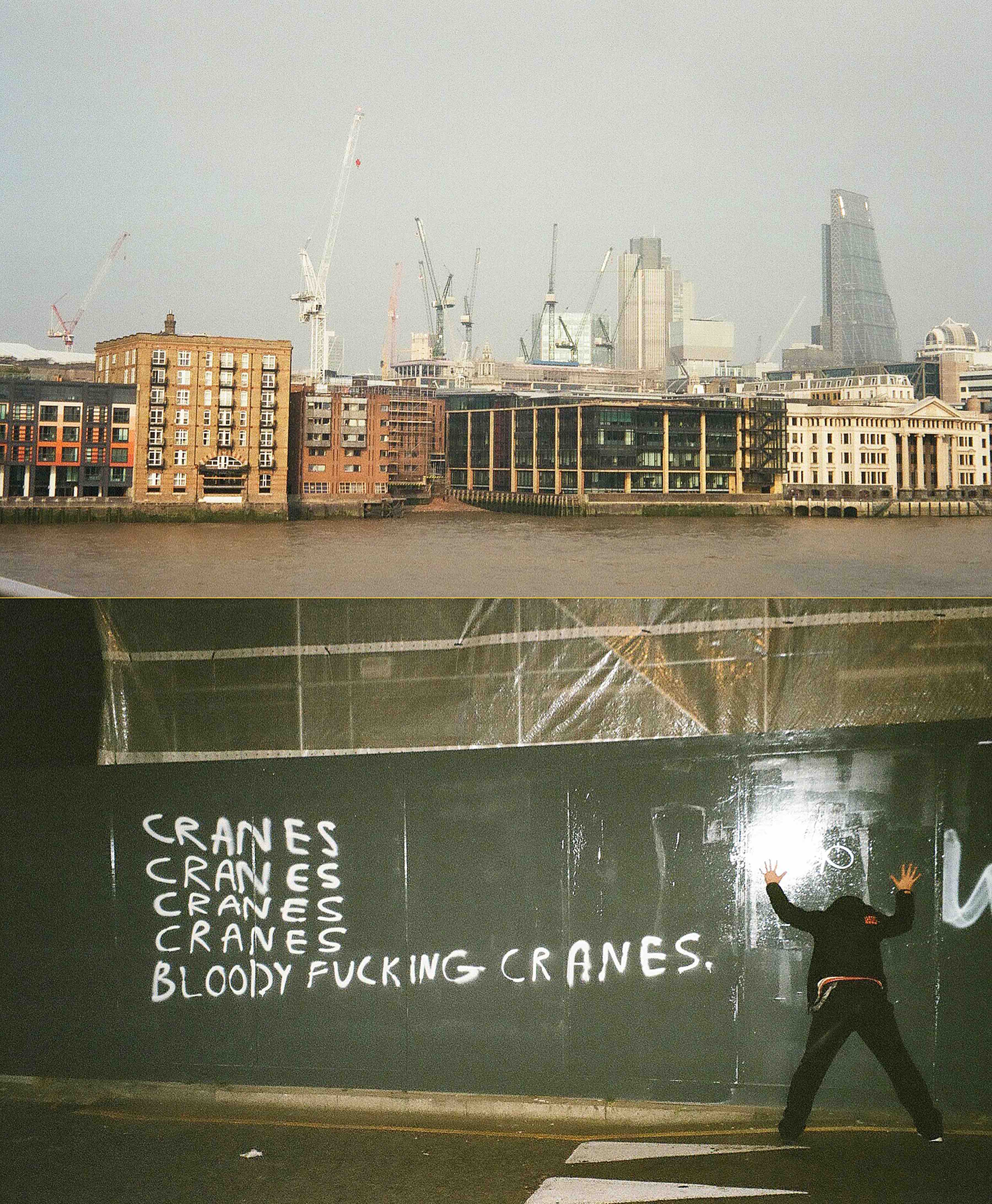 You guys are prime examples of how art and activism intersect. In your view, what’s the role of the activist artist – and especially of the street artist – in 2017?

Dont Fret: I’m interested in using my work to talk about issues I care about: issues relevant to my neighbourhood, my city, my country and my sense of humour.

I think humour is a really important tool and I am grateful I’ve found it in my work as a way to deal with the “dark times”. Otherwise I’d probably just be under my bed in the fetal position screaming about the lack of soy products in public schools.

Street art has taken a few unfortunate turns in recent years, but bluntly: placing art in the streets illegally is an inherently political act and, in my view, an extremely important one in this time, as many artists move into more commercial work and purely legal muralism.

Edwin: Nailed it. I think that’s why we naturally gravitated to the other’s work, both in aesthetic and execution. The energy in applying the (illegal) work is something I value highly and is lacking in most muralism.

Also the restrictions that I, and many others, encounter when working legally – especially when it comes to discussing political issues – are numbing the audience. Unless those restrictions are challenged, that could completely jeopardise the power that this avenue of public art has. 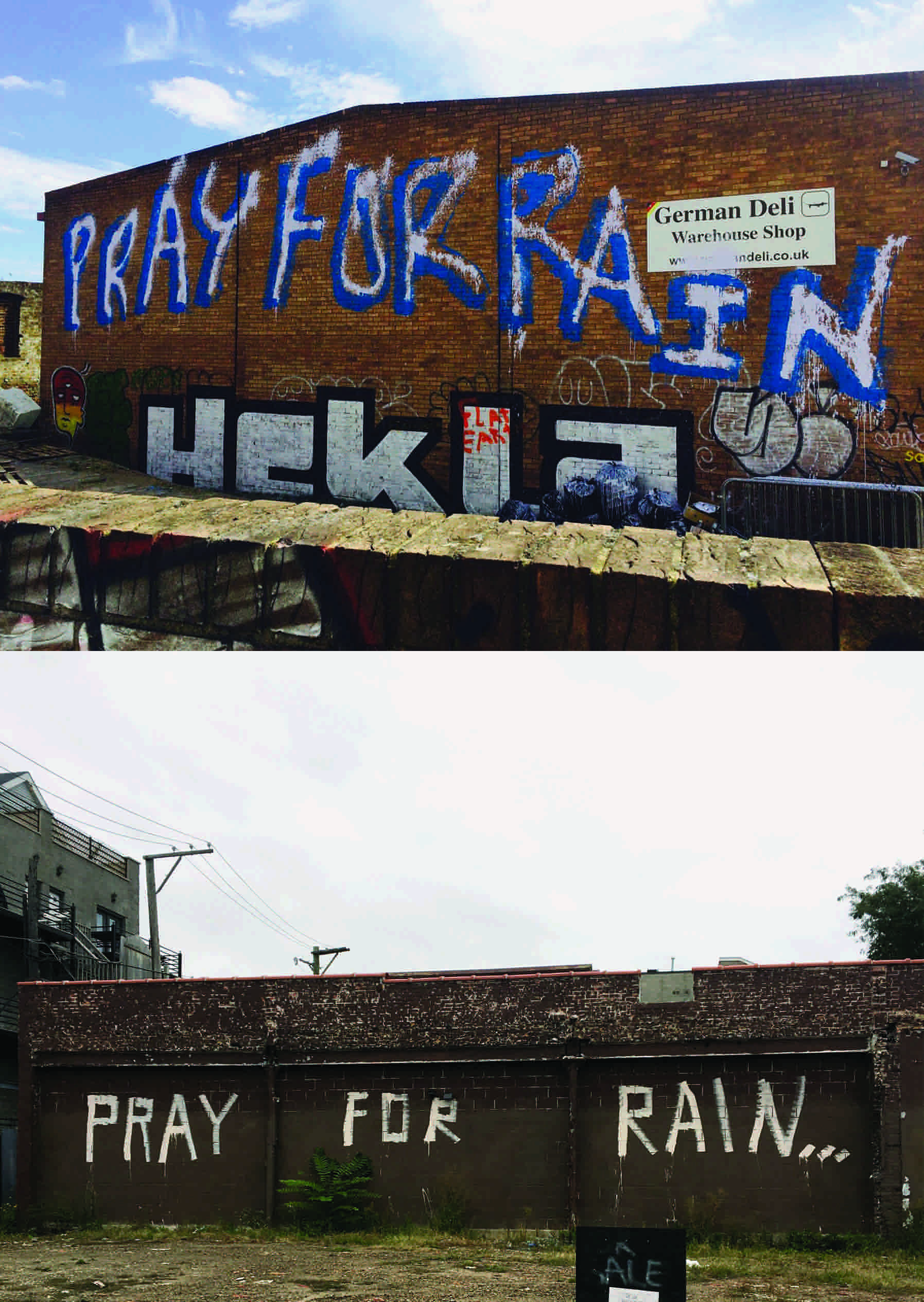 Where did the title The Distinct Sound of Laughter In The Distance come from?

Dont Fret: We are now – perhaps more than any other point in human history – capable of communicating with one another, yet we’re maybe also the least capable of learning from that exchange.

Have you noticed any difference in the ways people in both cities have reacted to the messages?

Dont Fret: We didn’t announce the project until the end of 2016, so it was interesting to see people react over a course of a year to what’s essentially Edwin’s work in my handwriting… to see Chicagoans’ react to graffiti and text written by an Australian that has never been to Chicago.

Edwin: In London, there seemed to be a hesitation to even post the pieces [online], let alone give them the time of day to be to be understood, if there was no claiming of it by legible signature.

For me that has always been interesting territory, as there is such a reliance on the celebrity element to a lot of work out here on the streets. It’s nice to be reacting to and, in essence, rejecting that notion. 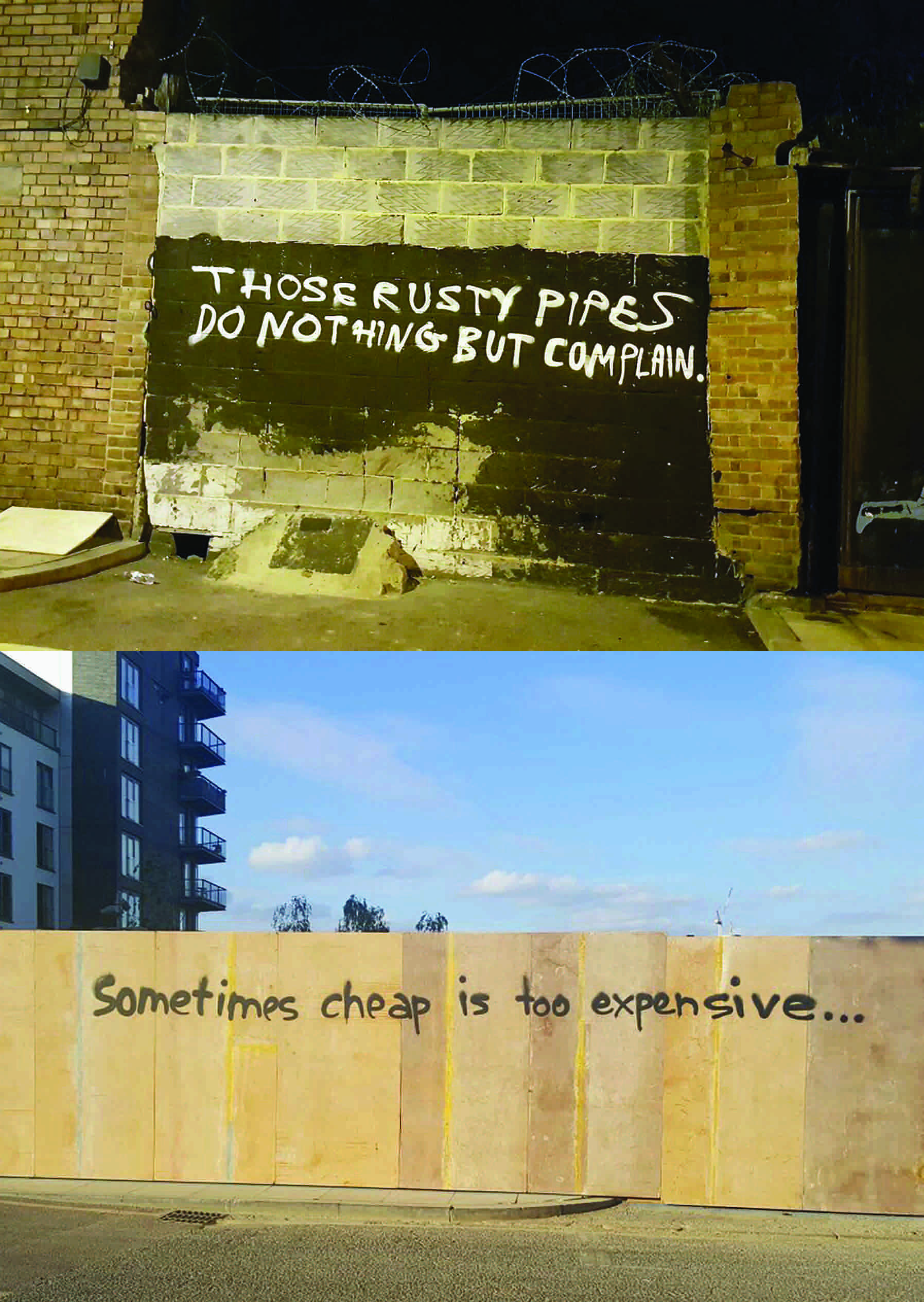 Are you planning to continue the project over the next few years?

Dont Fret: What’s exciting is that the project really just feels like it’s beginning. I am still writing some of Edwin’s text in the streets of Chicago and as I travel.

Edwin: I think it’s more important now than when we began the project… and due to the nature of this as an exchange of ideas between two people on different sides of the planet, there’s never a shortage of inspiration. 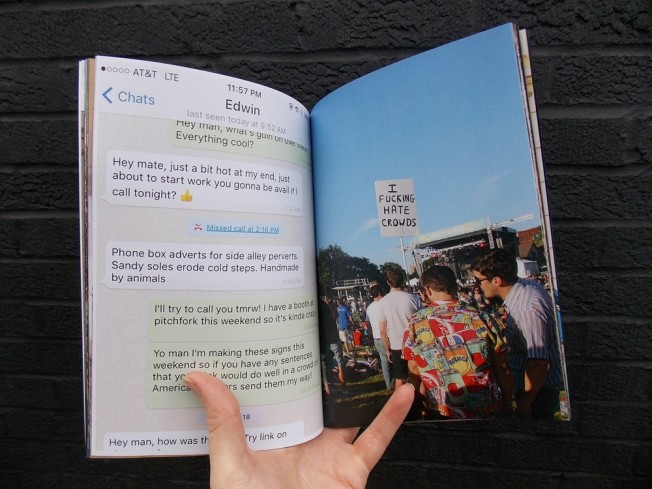 The Distinct Sound Of Laughter In The Distance is available to buy at Unit 5’s online gallery (UK), and at Dont Fret’s personal website (US).

Linkedin
RELATED ARTICLES
OTHER ARTICLES
The revered showbiz chronicler recalls his journalistic beginnings, documenting subcultural scraps in the ’80s.
Over the weekend, London locals came together to resist a pre-planned police raid targeting delivery drivers.
After news broke last week around an expected reversal of the 1973 landmark law that made abortion legal in the US, protestors gathered in the UK in support of American women.
From the Yakuza to a biker gang, Bruce Gilden recounts capturing Tokyo and Osaka in the ‘90s.
The author discusses her blistering new novel about history, revolution and queer love.
The government is scrapping the Human Rights Act in a move that will hit marginalised people hardest.