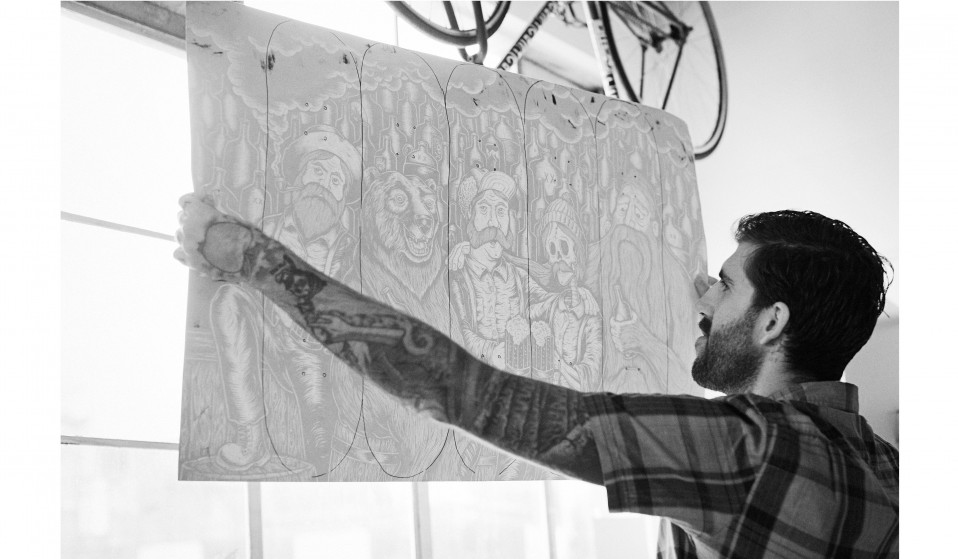 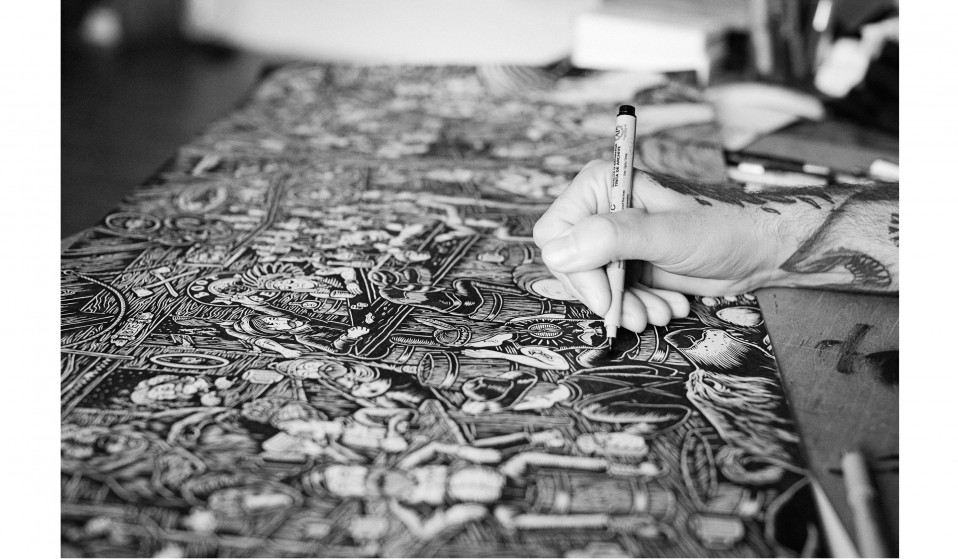 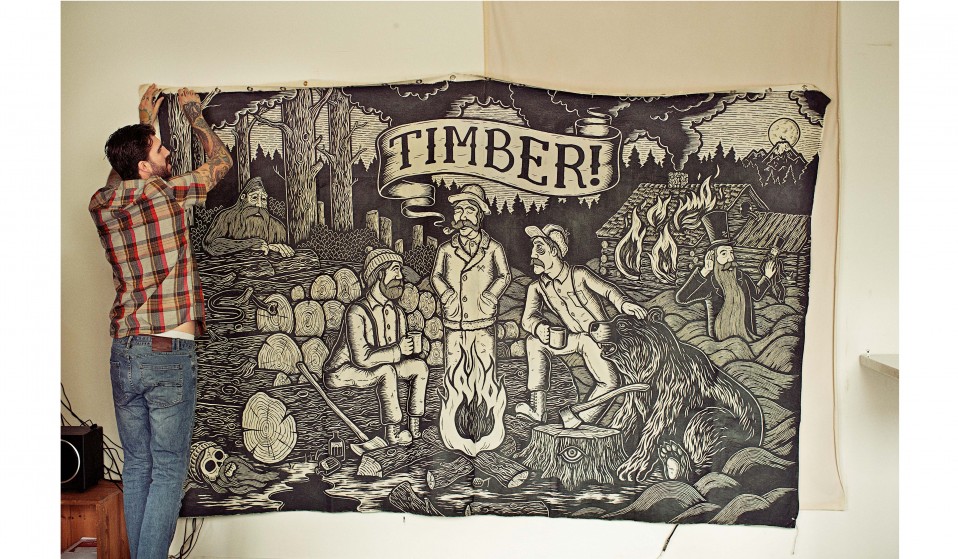 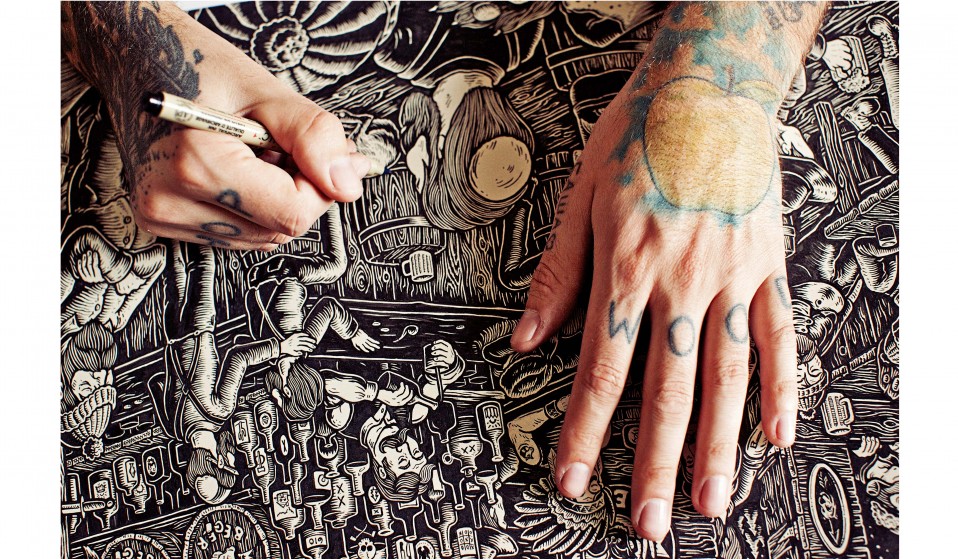 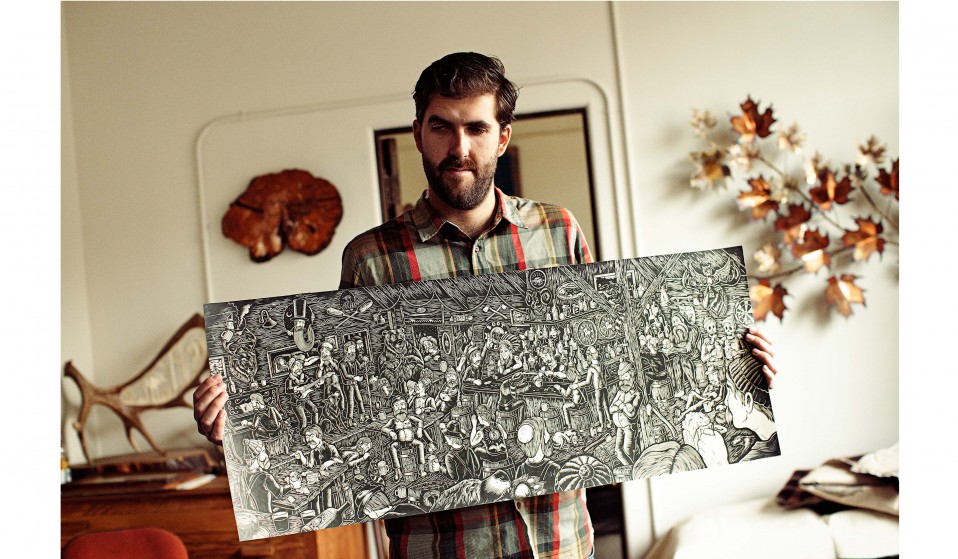 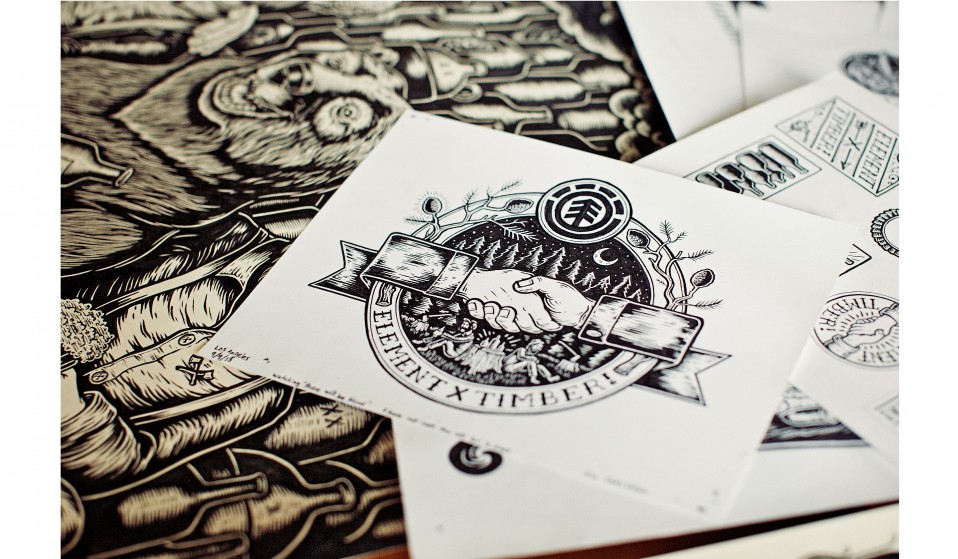 Enter Timber!’s weird woodland world of lumberjacks and liquor-stealing racoons on the Boot Beer Tour to celebrate the launch of the Fall 2014 Element x Timber! collection.

Enter Timber!’s weird woodland world of lumberjacks and liquor-stealing racoons on the Boot Beer Tour to celebrate the launch of the Fall 2014 Element x Timber! collection.

Los Angeles may not be a natural terrain for lumberjacks, but that doesn’t stop California’s Chad Eaton from weaving them into his work. The self-taught artist and skateboarder – who works under the playful moniker Timber! – has spent the best part of a decade dropping axe-wielding beardies, feathered Native American chiefs, and beer-glugging bears into an expansive body of black-and-white work. It’s one giant adventure – straight to the heart of blue-collar Americana – and it just keeps on going.

Now, having teamed up again with longtime collaborator Element, Timber! is bringing his characters together in one giant piece, a ‘Last Supper’-like bar scene that took 400 hours to complete and has inspired a denim collection and line of graphic tees.

“I can’t seem to draw anything without making a story out of it,” smiles the bearded artist, whose four groups of characters have inspired a cut-n-sew collection of denim jackets and jeans. “There’s The Bygones, they’re skeletons; The Fallers, who are lumberjacks and workers; The Traders, who are the bosses – kinda like the villains; and the there’s The Keeper, who’s a Big Foot character.”

Summing up the collection is a drawing of handshake that’s as solid as they come. “That’s meant to represent the workmans’ bond,” says Chad. “Everything I do pretty much leads to the next thing – my next group of projects will probably have a lot of hints from this drawing – so if you want to watch the story continue, stay tuned.”

Now you have the chance enter Timber!’s offbeat world of hard-drinking lumberjacks and beer-swilling blue-collar workers on the Boot Beer Tour. Celebrate the launch the Fall 2014 Element x Timber! capsule collection by dressing as a workman and becoming part of Timber’s bar scene. You could win your favourite Element x Timber! garment and a Polaroid camera from Impossible Project. 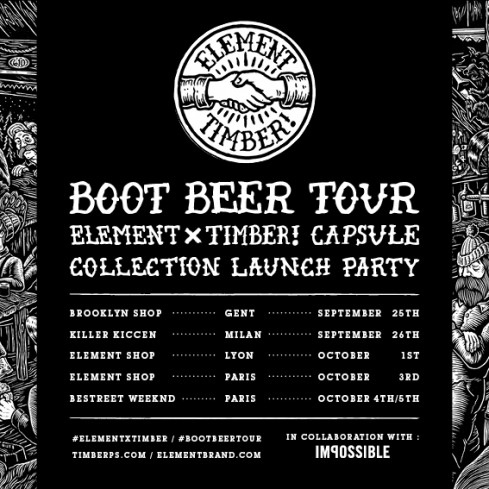 Head over to Element to find out more about the Boot Beer Tour in your city.

Linkedin
RELATED ARTICLES
OTHER ARTICLES
Yesterday, rail workers came together to protest poor pay, working conditions and job cuts in their latest round of strikes.
In the latest instalment of Photographers in Conversation, the creator talks portraiture, platforms and taking inspiration from Little Simz.
A new series of photos by Johny Pitts shines a light on communities and subcultures that have all too often been overlooked.
With the UK now set to run out of vaccines, people working in the sex industry – particularly outside of major cities – have been left especially vulnerable, reports Brit Dawson.
Steel City is often overlooked when it comes to the country's cultural radar despite its role in shaping electronic music.
To mark the premiere of his new documentary on surfing giant Gerry Lopez, the filmmaker and former pro skateboarder sits down to share his unique brand of wisdom.