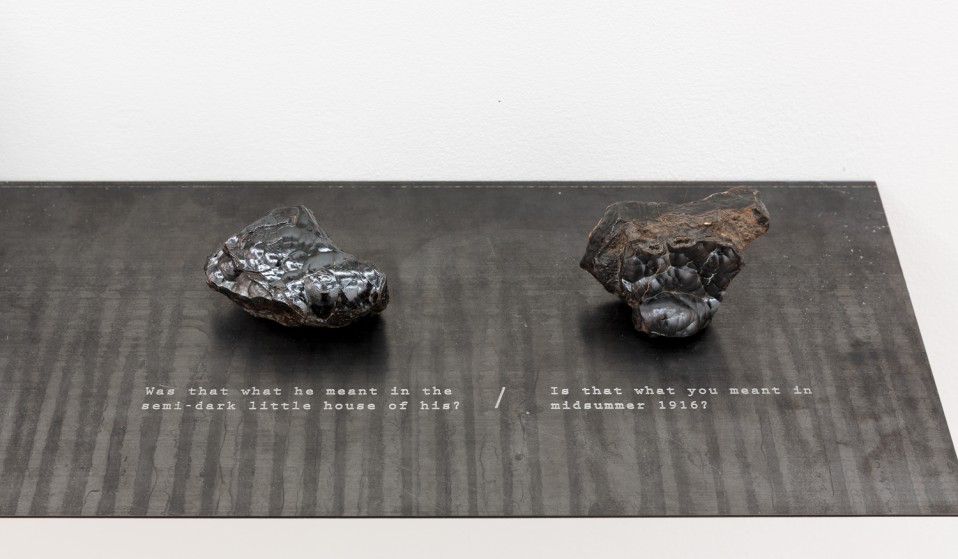 'As long as the occupation lasts, every action in every field of life has a political role in the conflict.'

'As long as the occupation lasts, every action in every field of life has a political role in the conflict.'

What do plants have to do with politics? It turns out even the weeds that grow on the land in Israel/Palestine can be related to the conflict. Let’s not forget the Oxford Dictionary definition for weed: “A wild plant growing where it is not wanted and in competition with cultivated plants.”

Artist Ella Littwitz plays a game of mirrors. Presented with her artworks, you might think you’re deep in a botanist’s study: casts of plants, landscape chalkboard drawings, organic looking models. But what reflects back at you is a deep investigation into roots; into what is made to look natural; and on how this can be exploited for political gain.

In Seam ReZone, made out of altered footballs, she looks at the 19 years in which Jerusalem was divided in two parts between Jordan and Israel, cutting off neighbourhoods and houses, kept separate by a minefield. An Arab school was located on the border of the Jordanian side, with the children often kicking their balls into no man’s land.

In December 1965, the UN requested that Israel collect and return the balls to the children as a Christmas gift. As the UN officials looked on, an Israeli officer marched through the no man’s land while Jordanian soldiers directed him from the other side of the border, yelling “go left” or “go right” to prevent him from stepping on a mine. He collected 28 footballs.

In No Place, Good Place, Littwitz plays with a series of sketches she found at the Central Zionist Archives in Jerusalem, depicting the new forests that were to be planted after the establishment of the state of Israel, “following the desire to ‘make the desert bloom!’ while gradually concealing the existence of what came before under imported trees,” she says. 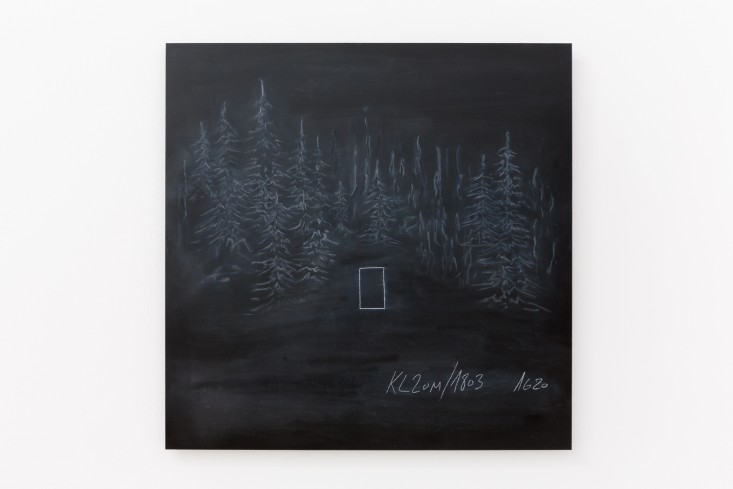 More Poetry than Instruction, More Instruction than Poetry, made of chalk on blackboard.

Littwitz was born in Haifa in 1982 and has studied and exhibited across Europe.

Tell us more about what you do – and why.
I think the best definition for what I do would be “archival artist”. A quote from critic Hal Foster’s essay An Impulse does something to explain this: “to make historical information, often lost or displayed, physically present. To this end [archival artists] elaborate on the found image, object and text, and favour the installation format”. I believe that the place I am coming from and the multiple narratives bound up together in my work are directly connected to this kind of approach.

Why did you decide to use plants and botanics in particular to talk about the situation in your come country?
The first trigger was an old book I found while researching: The weeds of Palestine and their control, published in 1941 by Dr. M. Zohary in Tel Aviv. I was intrigued by the definition of what is considered a weed and the way it maps a portrait of a place by determining what should stay and what should leave. The more I delved into the world of the botanical, the more surprising the socio-political parallels became in terms of terminologies and behaviours.

The fact the book was published in 1941, just before the establishment of the state of Israel, made me think about the use the Zionist movement made of nature and making things appear natural. One of the slogans the Zionists used was “making the desert bloom”. The link to the ground and the fact Zionists described the land they found as “desert” are important to understand the construction of a new identity for land and state. 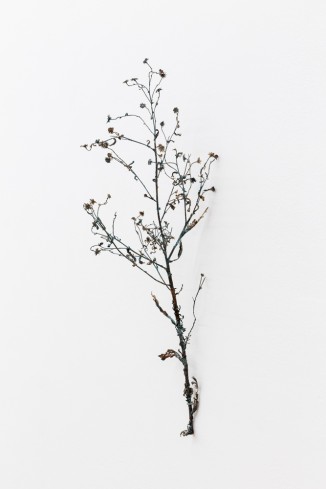 The Act of Going Up, a bronze cast of the plant Dittrichia Viscosa.

Let’s talk about you piece The Act of Going Up, the research behind it, and the parallels with Zionism.
The artwork The Act of Going Up is a bronze cast of Dittrichia Viscosa, a very common plant throughout the Mediterranean Basin. It has sticky leaves and a strong unpleasant smell. The Israeli poet Yehuda Amichai wrote “that it is the real smell of Israel, a bit sweet and also bitter, a little dry and also strong”. The memory of that strong smell is very much a part of my childhood growing up in Israel.

The interesting fact about this plant is that if the soil in Israel is cleared (say for a building site) it will always be the first plant to grow, thus it is one of the “pioneer” species, and on top of that it has what is called an “allelopathic” character, which means that chemically it prevents other flora from growing around it.

Language and terminology is again is very important in this case – the hebrew name of this plant, Tayun Davik, is partly a Hebraization of its Arabic name and is translated rather fittingly as “sticky mud”.

Could you talk a bit about the role of archaeology in the territorial conflict in Palestine/Israel, and how you incorporated this in your work?
As I see it, as long as the occupation lasts, every action in every field of life has a political role in the conflict. The land and the soil are the core of the conflict and thus everything buried under it, metaphorically and physically, is charged. This place was a crossroads, everybody passed here in a certain moment and left something behind, if you dig deep enough in every random spot you will probably find something which will be important to someone.

I worked with archeology both in Israel and in Berlin. I find many similarities between the questions I’m asking and those the archeologists ask, although the practice and the aims are different. 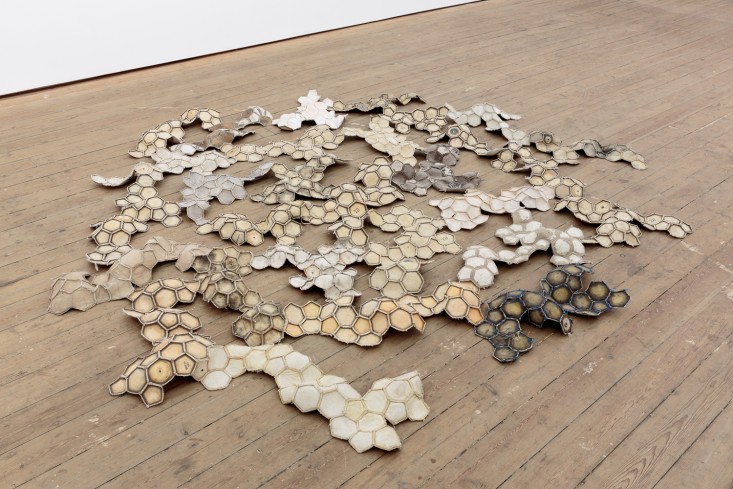 Seam ReZone, made out of altered footballs.

You are careful “to present, not comment”. Do you think about the viewer when you work? What message do you hope they take from your art?
I am not into preaching, the works present a series of facts, objects and marks. I think about the viewer when I construct these works but I am not constructing facts. People may take from the work what they wish, I hope only that they are intrigued enough to enter a thought process of their own around the work. I am not expecting that viewers necessarily come to see the exhibition with any former knowledge of the history it engages with but I believe there are few levels one can read the works.

The works are coming from a certain place but I hope that they do not necessarily stay there. I have lots to comment on personally when it comes to politics but I believe that the works, distinct from me, should draw attention to curious facts rather than make comments, ask the questions rather than give answers.

What’s your life like in Israel?
I just moved back to Israel a few months ago after seven years in Europe. I was occupied with the complexity of this state while I was away in the same way it bothers me here. Culturally and financially it is not simple either.

I live in Jaffa and from my roof terrace I can see two mosques, a synagogue, a church and one palm tree which moves from the wind of the Mediterranean sea. I think this says it all.

Linkedin
RELATED ARTICLES
OTHER ARTICLES
A new series of photos by Johny Pitts shines a light on communities and subcultures that have all too often been overlooked.
Following the release of his latest album, the rapper talks about finding a new approach to songwriting, attitudes to poverty, and why his music is more than a political statement.
The author discusses her new memoir, which offers a sobering reflection on the racism and otherness she’s experienced along with a joyful celebration of her culinary heritage.
A series of photos by the late Jerry Dantzic taken in 1957 show a tender side to the iconic Jazz musician.
With the virus now a global health emergency, we must take steps to fight misinformation and demand a swift UK-wide vaccine roll out, writes Phil Samba.
Students are being left to languish in unsafe housing, in some cases leading to serious health complications.