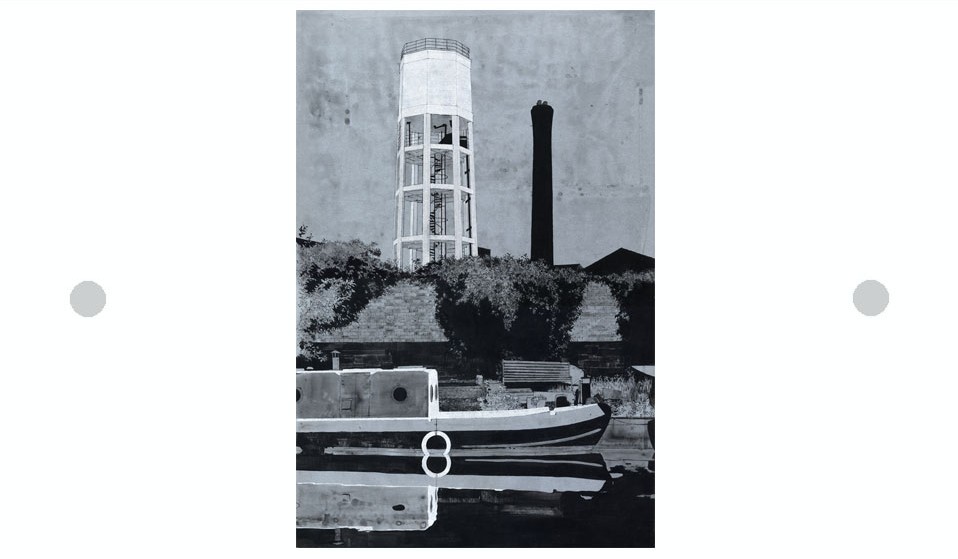 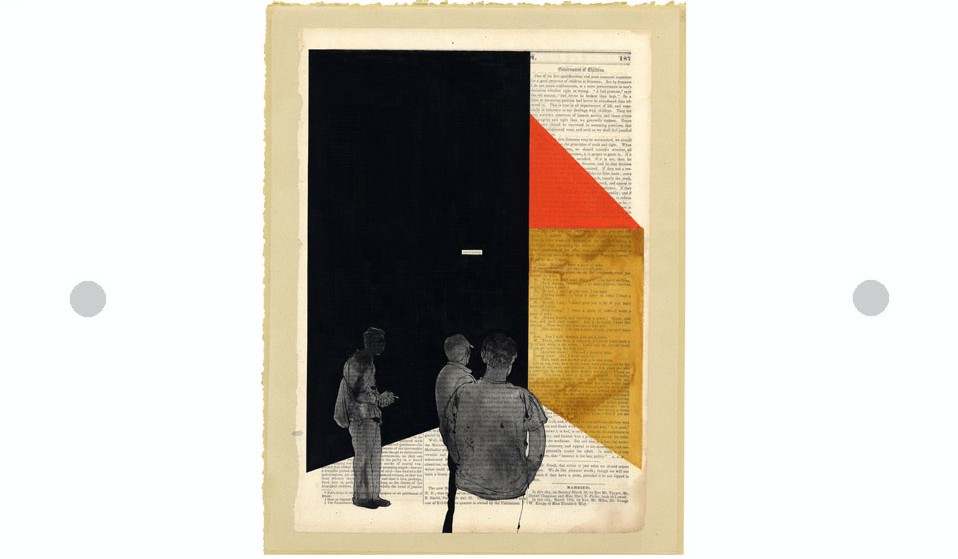 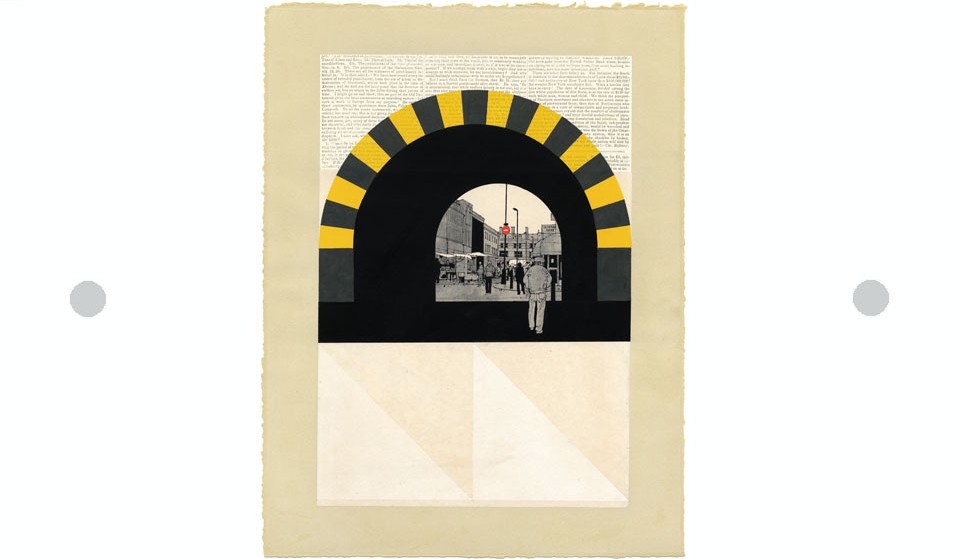 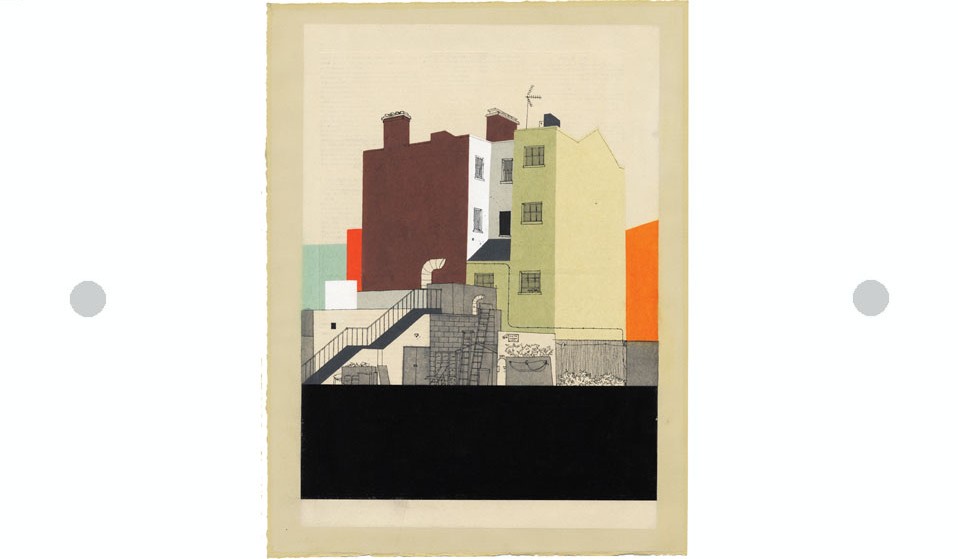 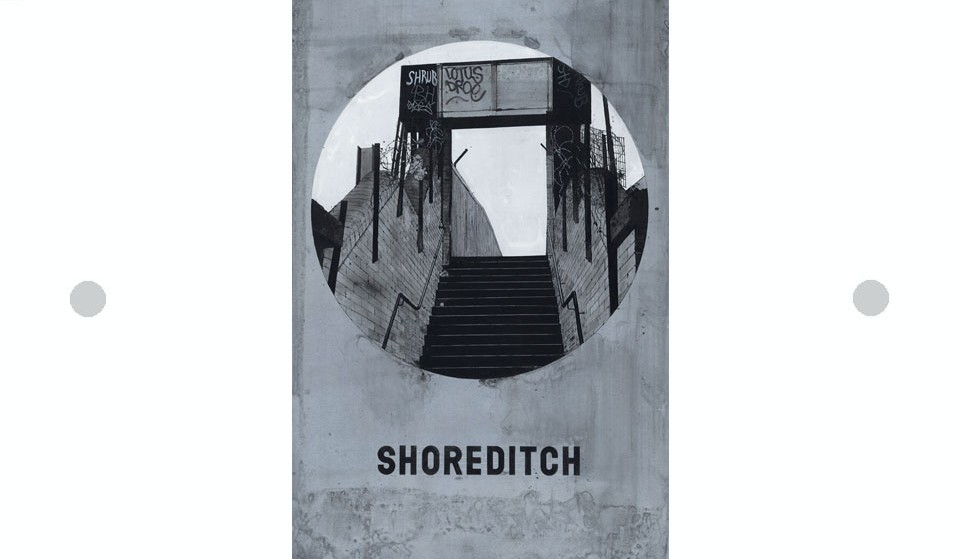 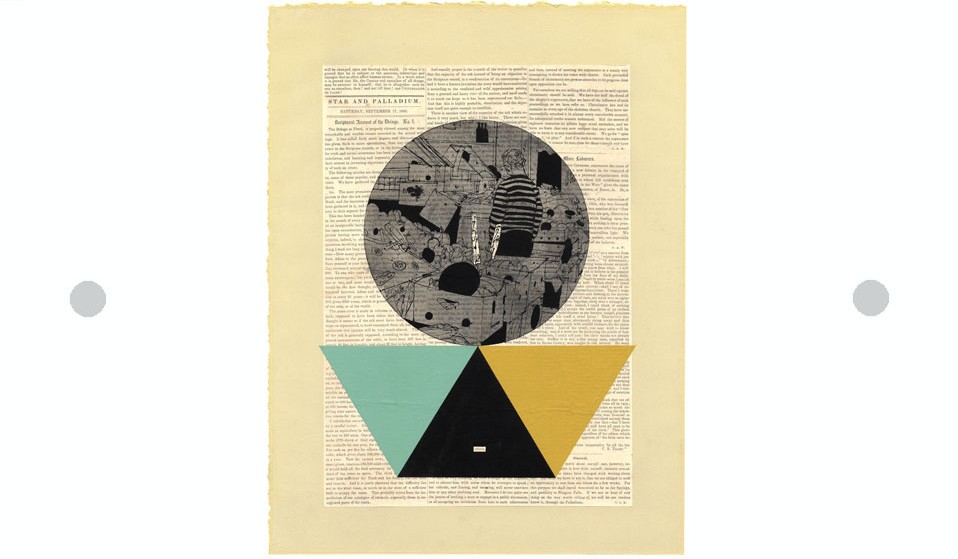 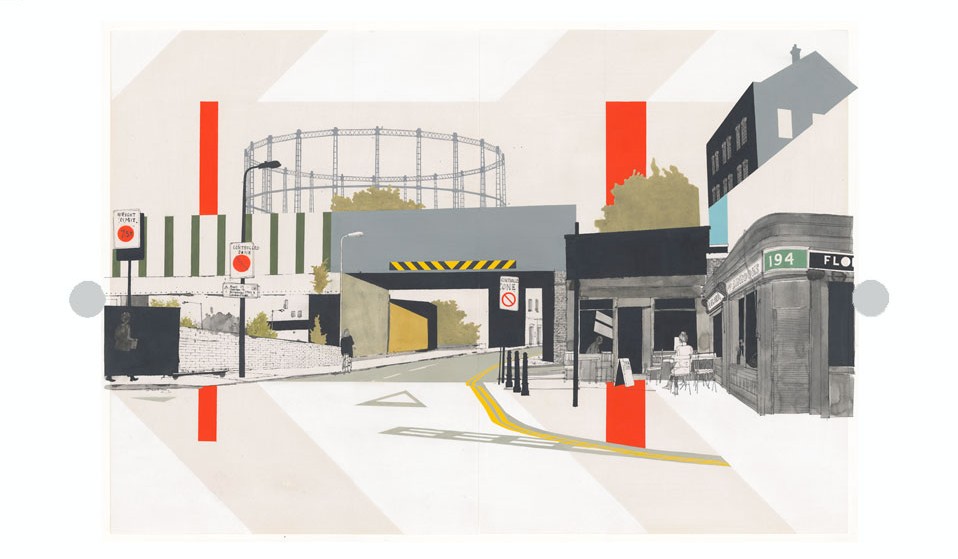 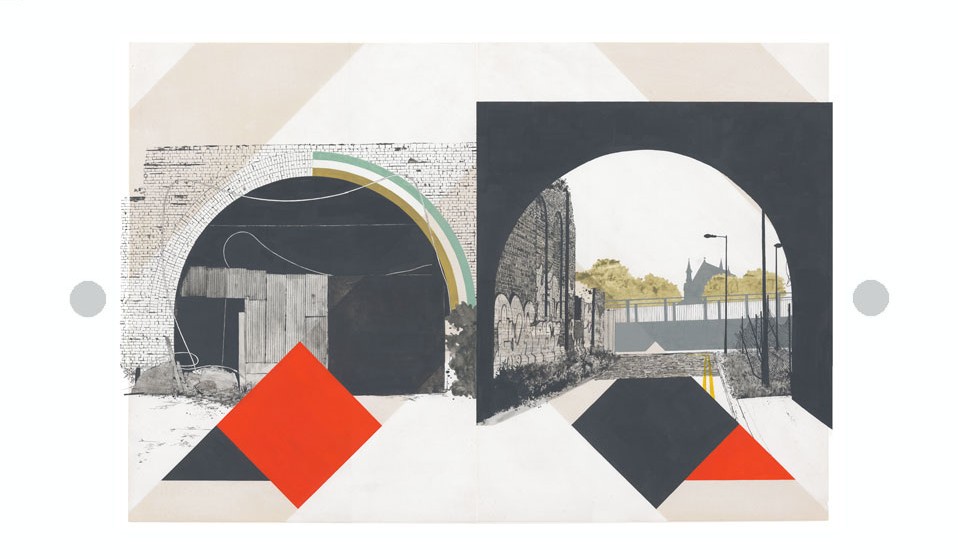 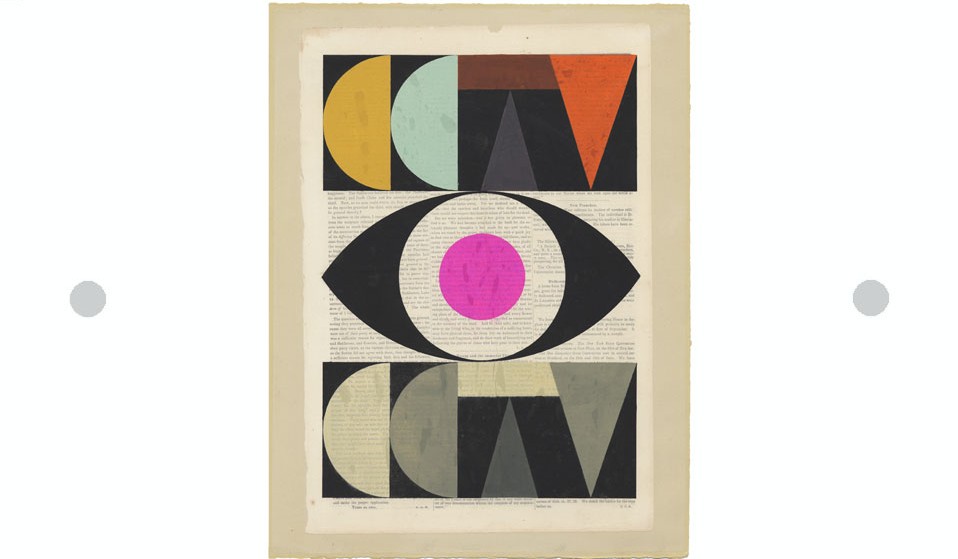 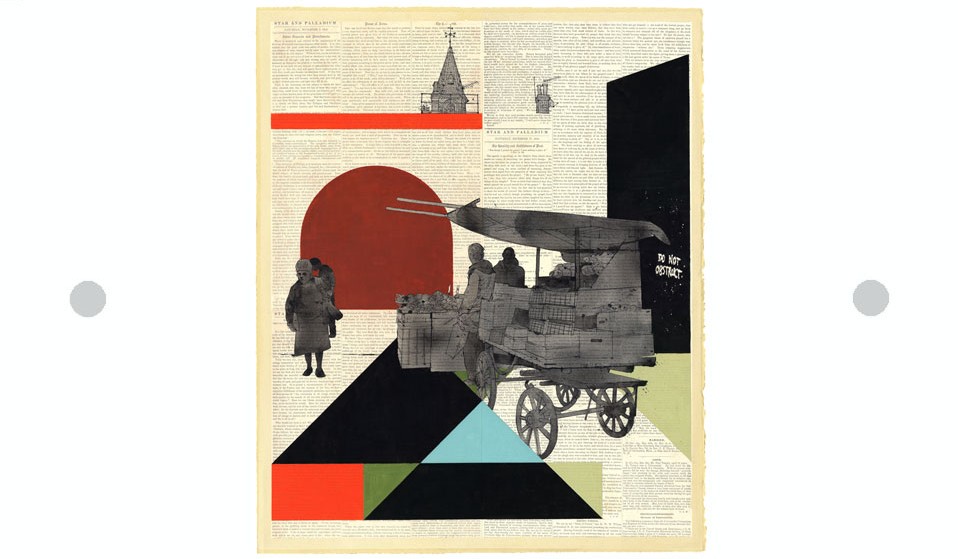 Evan Hecox likes to keep things straight. When we meet on a rainy afternoon in east London before the private view of Borough & Lane – a show inspired by London’s post-industrial landscape – the Colorado-based artist is in a characteristically matter-of-fact mood. He’s also drenched. Stepping inside the gallery, he tips off his hat, brushes raindrops off his coat, then methodically sets up a camera in the centre of the room. Our conversation, for the next forty-five minutes or so, becomes something of a pivoting ballet; every few minutes we swivel around, turning the tripod inch by inch, so that he can snap his work from every angle. Geometry, it seems, is a recurring theme.

“I’ve always tried to reduce the landscape into abstract things,” says Evan, meticulously lining up a shot. “Like, some of these shapes are just the suggestion of a window. With these pieces, I took it to another level by adding in geometric forms that have nothing to do with anything real.”

This perfectly simplified urban world, where “really organic line work contrasts with geometric shapes”, has become the Hecox staple. Since landing in San Francisco in the mid-nineties – a time and place synonymous with Mission School artists like Barry McGee – Evan has taken everyday city scenes, from Mexican taco shacks to suburban LA, and found something vibrant in the mundane.

“Coming from Colorado, it was always fascinating to me, being in a city so busy and dense,” explains Evan, who became ensconced in the art scene ballooning around The Luggage Store, a gallery that showed the likes of Chris Johanson and Margaret Kilgallen. “I had this fishing stool and I would go sit and sketch architectural things, but people would always bother me. So, I found this old Polaroid camera at a thrift store, and started taking black and white shots around San Francisco.”

Working from photographs – in a pristine studio built onto his Denver home – Evan breaks down the image into its basic components, amplifies the shapes that catch his eye, strips away the rest, and then methodically works into the piece with line work and bold blocks of colour. It’s an aesthetic that skateboarding has lapped up. Since 1997, Evan has been Chocolate Skateboards’ go-to guy, lending his tonal style to over 300 graphics. “In high-school, I would read Thrasher cover to cover and draw pretend skateboard graphics for nobody in particular. Now, I do my best to stay a little bit naive to skateboarding trends, so that I can produce work that doesn’t look like everything else.”

With a New York show planned for May – “an opportunity to produce some larger, more ambitious pieces” – and a public wall to paint in Sydney, Evan’s ready to up-size the scale of his work, regardless of “whether they sell or not”. As he explains: “It’s not easy, when my basic collectors can’t afford a ten thousand dollar piece. But you can’t have aspirations without actually doing it; you can’t just talk about it.”

That evening, Evan’s show attracts a mixed bunch: there are beer-swilling drifters with skateboards hooked under arms, and meticulously dressed designer-types whose pockets are brimming with thirty-something cash. In the middle of it all is the unassuming figure of a man – neat shirt, short hair – taking in the sheer scale of it all. “London is a huge, vast, old place; you have to live here your whole life to fully comprehend it,” says Evan. “But hopefully, from an outsider’s point of view, I see little things filtered through my own perspective. I think it’s always interesting to see someone else’s take on a place.”

Linkedin
RELATED ARTICLES
OTHER ARTICLES
After rewriting the indie rulebook with her devastating songs about romantic longing, the singer-songwriter is now imagining a future in which the artist is no longer a product.
In the latest instalment of Photographers in Conversation, the creator talks portraiture, platforms and taking inspiration from Little Simz.
Photojournalist Fiora Garenzi spoke with people still living in Eastern Ukraine, an area which seen some of the heaviest fighting since the war began.
Last week, Tower Hamlets council removed its nudity-restricting licensing conditions in a huge win for London’s kink community.
With the virus now a global health emergency, we must take steps to fight misinformation and demand a swift UK-wide vaccine roll out, writes Phil Samba.
Yesterday, rail workers came together to protest poor pay, working conditions and job cuts in their latest round of strikes.