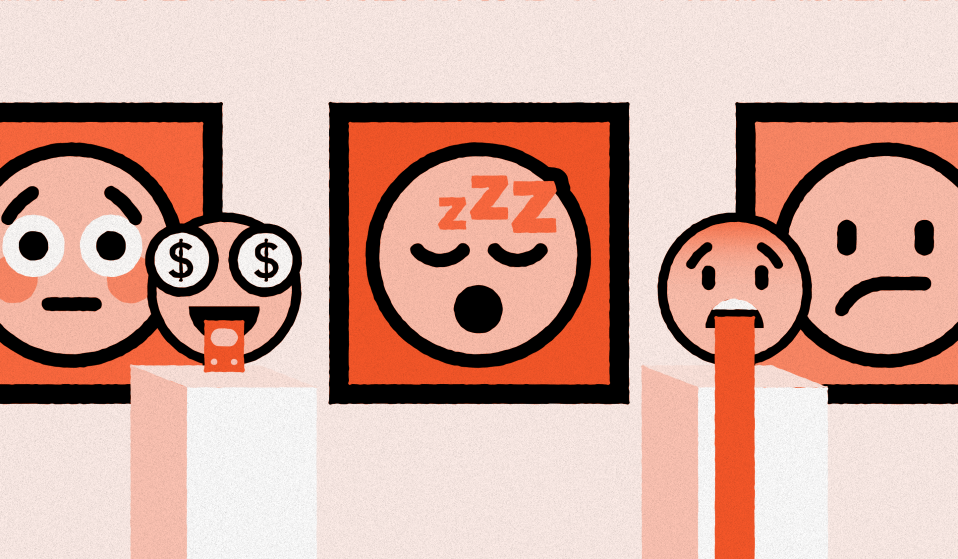 London-based art collective The White Pube are taking on the sexist, whitewashed London art world, one DIY project at a time.

London-based art collective The White Pube are taking on the sexist, whitewashed London art world, one DIY project at a time.

The White Pube, a two woman strong London art collective, currently consists of Zarina Muhammad and Gabrielle de la Puente – both recent graduates of world-renowned art school Central Saint Martins. It might seem an odd name, The White Pube, but for those in the know it’s a clever play on words.

The old theory known as The White Cube dictates that art is supposedly best viewed and appreciated in a sterile, white space. For these young women, removing these outdated boundaries allows them to stick their middle fingers up to the mainstream.

They curate as well as create, write weekly art criticism, produce podcasts, and host a monthly online residency on their website.

Zayn Malik Zindabad is a 50-minute screening of work from moving-image artist who are all exclusively South-Asian. “We wanted to give these artists an opportunity to show their work in a vacuum”, explains Zarina, who is also one of the artists profiled.

“It’s creating an environment where if you ask, ‘Is this about brownness?’ It’s like…of course it is, we’re all brown here. The question becomes completely banal, and forces you to move beyond that.”

“We wanted to give them the audience that they deserve.”

Providing a space where colour and race can be momentarily put to one side helps people engage with the art, and focus on what else a piece may be saying. “It’s always a question of your identity when it comes to your art being talked about,” says Zarina. “It’s a question never asked of a white man when they show a painting”. she continues, so why should non-white artists always be forced to respond?

Take Selvi, a five-minute video from Rathai Manivannan. The piece shows two side-by-side videos of Rathai in traditional south Indian dress. “You can take this either way: as beautiful synchronicity moving in tandem with your past self or you can say, ‘Okay, this is about Indianness’”, explains Zarina. “There’s always a chance that someone isn’t going to take it the right way.” 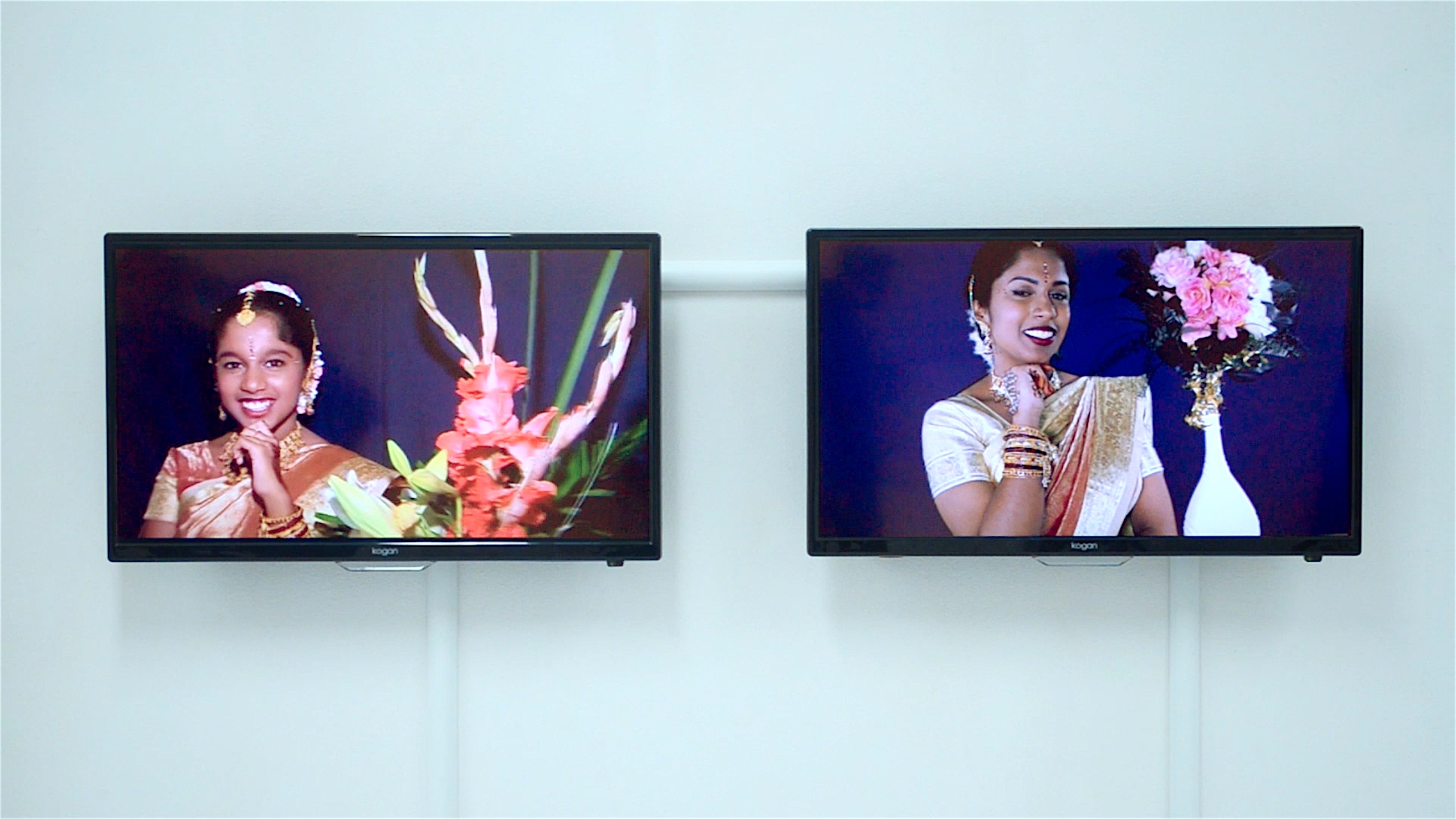 Representing marginalised people, giving them a platform and a voice, is one of the core aims of The White Pube: “No one listens to women of colour or working class people when it comes to the arts, so we’re going to self-aggrandise ourselves until they do listen, because we’re great,” laughs Gabrielle.

They’re in a unique position in that their collective began as an art criticism website, allowing them to not just curate and showcase, but to critique their work and that of their contemporaries too. “All art criticism was shit before us and we never read it”, Gabrielle says bluntly, no hint of sarcasm seeping through. Now they write what they want to read. Instead of giving stars, they summarise exhibitions with emojis.

“It’s made our art very self-conscious, but in a good way,” Gabrielle continues, highlighting how Shape Arts has recently commissioned the pair of them to travel to Glasgow to cover Unlimited Festival, which celebrates the work of disabled artists.

It’s a label that they shy away from, but both Gabrielle and Zarina are also straight up activists, but rather than just shouting or complaining, they focus their efforts on taking action. There’s no preaching, no demanding reform, they don’t have time for that. Instead these two are building new structures where their voices and those who we neglect to listen to can be seen and heard.

They’re also aware of their own relative privilege, a refreshing sight. Central Saint Martins is a world class institution: students struggle to get there and during their studies, but a degree can open doors. “We need to be calling out bullshit even when we’re part of that ableist bullshit,” says Zarina. “We probably do problematic things but it’s about recognising your privilege in other situations.” 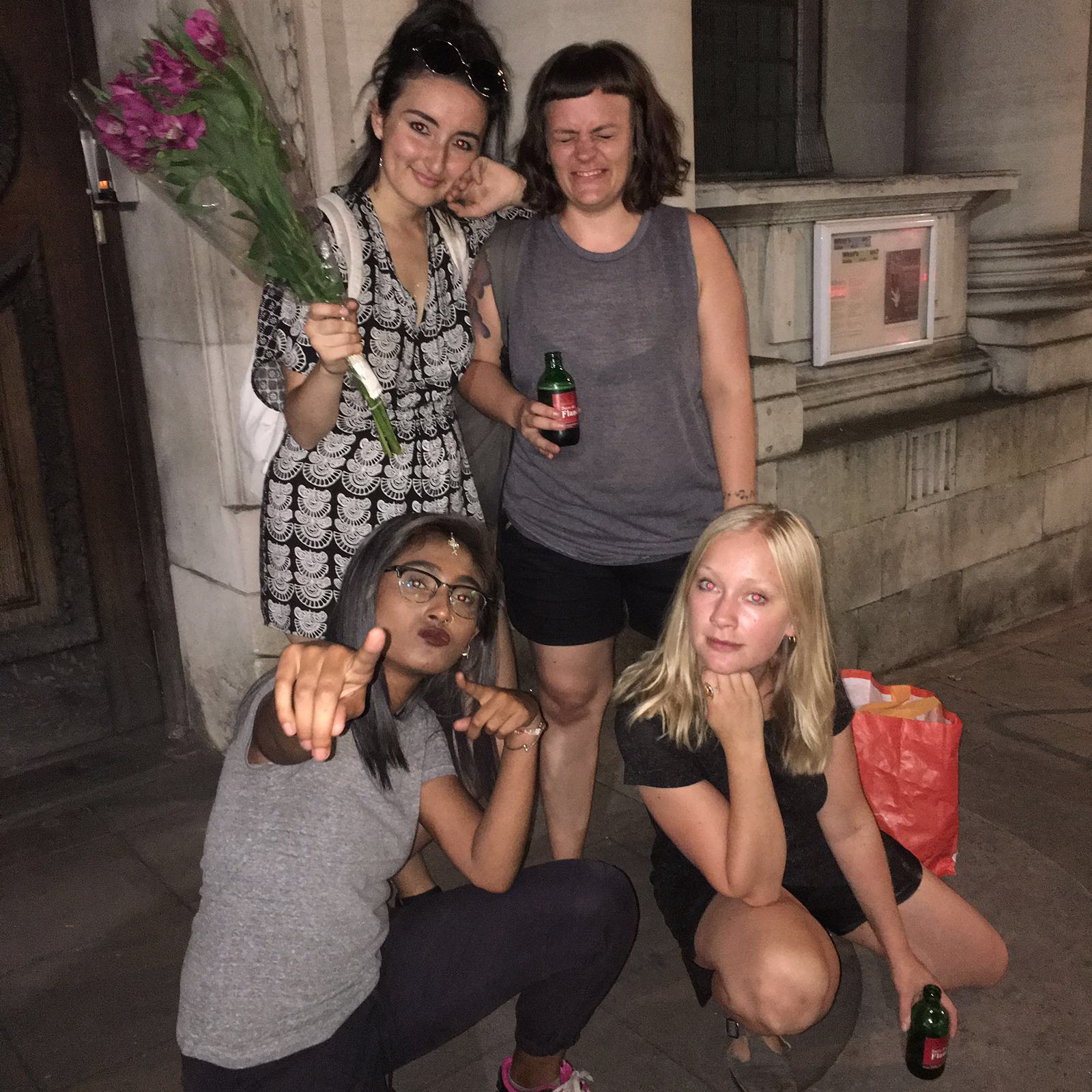 Gabrielle and Zarina with two friends

For many in their shoes, a chance to exhibit in the world’s major galleries would be nothing short of paradise, but not for these maverick artists. “We’re not making the kind of work they’re interested in. We slag them off time and time again. Everything we do is against that,” they each say.

But just because they’re not dreaming of the ‘big’ galleries, there’s heaps of ambition in their plans. This Autumn Gabrielle will be moving back to her hometown of Liverpool but instead of worrying about the distance, they’re excited about the prospect of not being tethered to the capital.

“Liverpool doesn’t have this commercial gallery [scene] which is quite difficult to navigate. Most of the projects that do happen there are artist-led so I’m excited to have one foot in a place that’s so different to London,” Zarina tells me.

They currently have an open call for artists to submit their work, and the only criteria for submissions that artists have no formal art training. “They’re not outsiders – why aren’t they just called artists?” they groan in unison.

It can be difficult to stand up against inequality or discrimination, especially for two young women in a world dominated by old white men. “It just so happens that we’re gobshites and we’re not afraid, but there are so many people who are afraid, in case they’re attacked in any way,” she pauses. “You have to be brave enough to make people uncomfortable.”

The White Pube are planning on touring Zayn Malik Zindabad (“if anyone will have them…”). Check their Twitter for updates.

Linkedin
RELATED ARTICLES
OTHER ARTICLES
In the last of our dispatches from OFFF Barcelona, Rufus Deuchler and Vincent Gault discuss the future of creative process.
The author discusses her blistering new novel about history, revolution and queer love.
Members of the collective share some of their reasons to run as part of #UnitedBySummits, a campaign that looks to uncover transformative power of the outdoors.
Photographer Robin Graubard’s debut book offers an unflinching record of turbulence and change across the Balkans.
To mark the anniversary of the mass trespass of Kinder Scout, a group of hikers came together with the intent of creating a new, fully inclusive culture for rural spaces.
After news broke last week around an expected reversal of the 1973 landmark law that made abortion legal in the US, protestors gathered in the UK in support of American women.