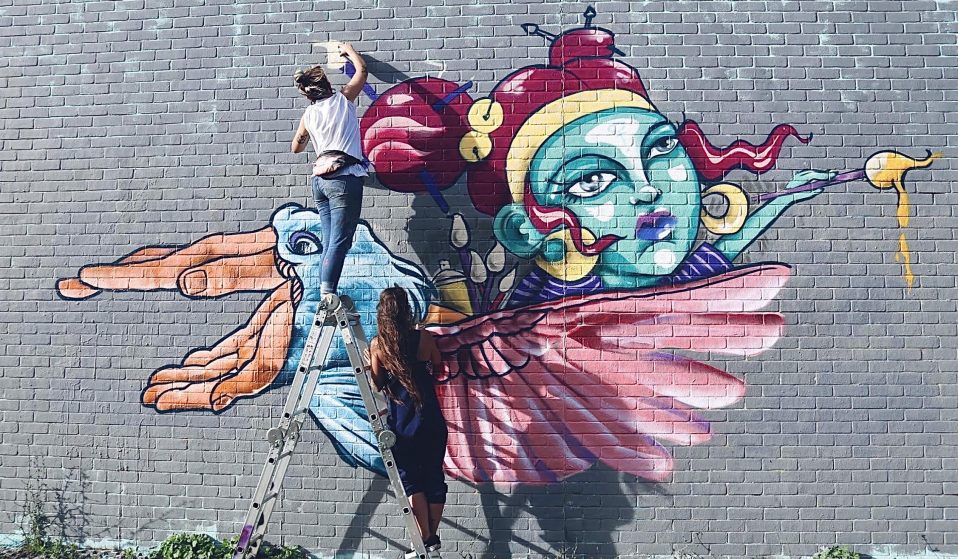 From the early originators to the female writers at the forefront of today’s scene, we talk to the artists redefining graffiti’s consciously macho origins.

From the early originators to the female writers at the forefront of today’s scene, we talk to the artists redefining graffiti’s consciously macho origins.

In its early days, graffiti-writing meant scaling walls to get into abandoned buildings, walking along train tracks in the dead of night, and battling with other writers to gain notability. Influenced by the originators from 1970s New York, the UK graffiti scene began to take its own form. But from the get-go, men dominated proceedings, with women writers few and far between.

In her 2001 book, The Graffiti Subculture: Youth, Masculinity and Identity in London and New York, ethnographer Nancy MacDonald explains how the appeal of graffiti was originally rooted within the idea of “challenge and male bravado”, as the likelihood of violence within the community meant the subculture was seen as macho and dangerous.

MacDonald writes: “[Graffiti] is presented, firstly, as a masculine resource; a tool which young men can use to confront risk and danger and gain, through this, the recognition and respect of their peers and the defining elements of their masculine identities.” She explains that through graffiti, early writers sought to gain “fame, respect, autonomy, self direction and some sense of masculine status”.

But in 2022, women writers are recognised for their contributions to the scene, in a landscape where graffiti and street art have long existed as legitimate art forms. Last year, for instance, all-girl crew WOM Collective was invited to create an exhibition in Brixton Village to celebrate International Women’s Day. With councils, agencies and brands jumping to commission spray-painted murals, and legal walls popping all over the country, those who previously felt marginalised in the scene are finding greater access.

Girls on Top (GOT) crew was one of the first all-women graffiti crews in the UK. Founded in the ’90s by the artist known as Chock, it started as a two-person group and is still thriving 20 years after its inception.

When the group formed “there was like one girl in 100,” says Chock. At the time, she sought out other women to feel safer around the “macho” energy of other writers. “Back then it was pretty violent. People would rob each other, they’d steal each other’s paint, there were fights. I’ve been punched and bottled… people wouldn’t believe that I would do my own pieces, or they’d just accuse you of sleeping with people. I was like I really just need to find some girl mates that do this,” she remembers.

But recruiting other women wasn’t always easy. She started out using a website called Graff Girls, then MySpace, before emigrating to Facebook, where the group now resides. 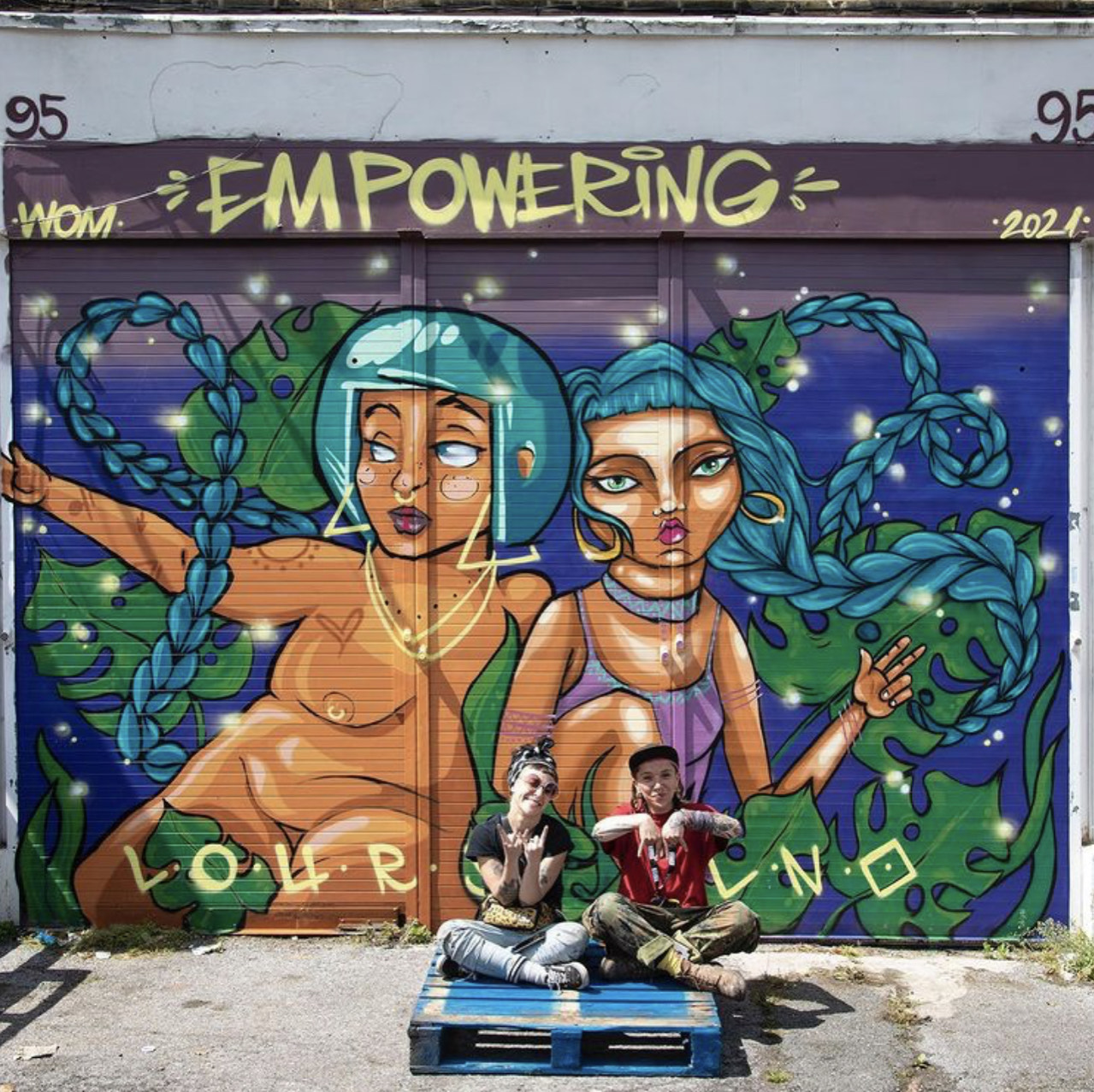 “To address the balance of girl writers in the scene, Chock used to put on girl-only jams which was a really amazing thing at the time, and actually she got quite a lot of stick for it,” says Candie, one of GOT’s earlier members.

Candie joined the crew with SHE, a friend of hers since college. As women, they found their artwork was never taken seriously. “I was in the era slightly after Chock where girls were starting to be allowed on the scene, whereas before it was very much a boys’ club, and as a girl writer you weren’t really accepted or seen as credible,” says Candie. “You basically had to be twice as good to be taken seriously as any guy.”

“As a female graffiti artist getting started you’re sort of put into one of two camps,” adds SHE. “You’re either a good writer, and then you’re allowed to be playing with the big boys, and it always comes with the tag, ‘Good for a girl.’ Or, you’re put in the camp of a ‘fangirl’, and they have a really awful term for it: basically, ‘graf sket’ or, ‘graf slut’. It means, ‘She’s only doing it because she’s trying to get guys.’”

But being a woman had some advantages. Both Candie and SHE were able to carve out their own niche as writers by adopting distinctive styles. The two favoured colours and fonts that were considered feminine, creating murals of pink and purple bubble writing.

“It was very heavily male and I actually chose [my tag] at the time as a reaction against that,” says SHE. “I want people to know this is a girl out here doing it.”

Sophy Robson, or SOFLY, is a street artist based in East London. She also uses an intentionally “bold and feminine style”, often talking back to the criticisms she’s faced as a woman. In an Instagram post, Sophy proudly points to a mural with curly pink lettering. Around her name tag are speech bubbles scrawled with derogatory messages: “not a real writer”, “biter”, “toy”. (A toy, Sophy explains, is an insult amongst writers, meaning someone with no skill or experience.)

She joined the graffiti scene relatively recently compared to Chock, Candie and SHE. Although it’s not as violent as it once was, she feels that misogyny is still very much present. For Sophy, it’s the “all-boys-together attitude and territorialism” that sticks out the most. “My experience of graffiti is that it’s one big boys’ club… Whenever I’m in [Shoreditch] I feel the dominance of masculinity in the graffiti there. It’s not all by men, but most of it is. It’s the subject matter and style that most overwhelms me,” she says.

Sophy recently painted a mural that she wanted to “stand up for women”. The striking pink and black sign read ‘97% Women’, referencing last year’s UN statistic that revealed that 97 per cent of women in the UK have experienced sexual harassment. However, as soon as it was finished, it was defaced by a male writer.

Although it’s fair game to go over another writer’s work, Sophy thinks her mural was covered a little too hastily. “If you are painting on a public wall you have to expect it to go. However, after I went and spoke to the guy and challenged him for going over an important message for women, he told me he didn’t care. I felt like the need for me doing the piece was justified,” she says. “As a woman you’re an easy target for them to go over – whether they want to admit it or not.”

Sophy isn’t alone in feeling that graffiti is a ‘boys club’. Ethnographic studies into street art have mapped out how the risk-taking culture has created a space for men to flex their bravery and construct their own ideas of masculinity. Sofia Pinto, PHD researcher in Cultural Studies, raises some vital questions in her 2020 article ‘Why can’t Banksy be a woman?’. 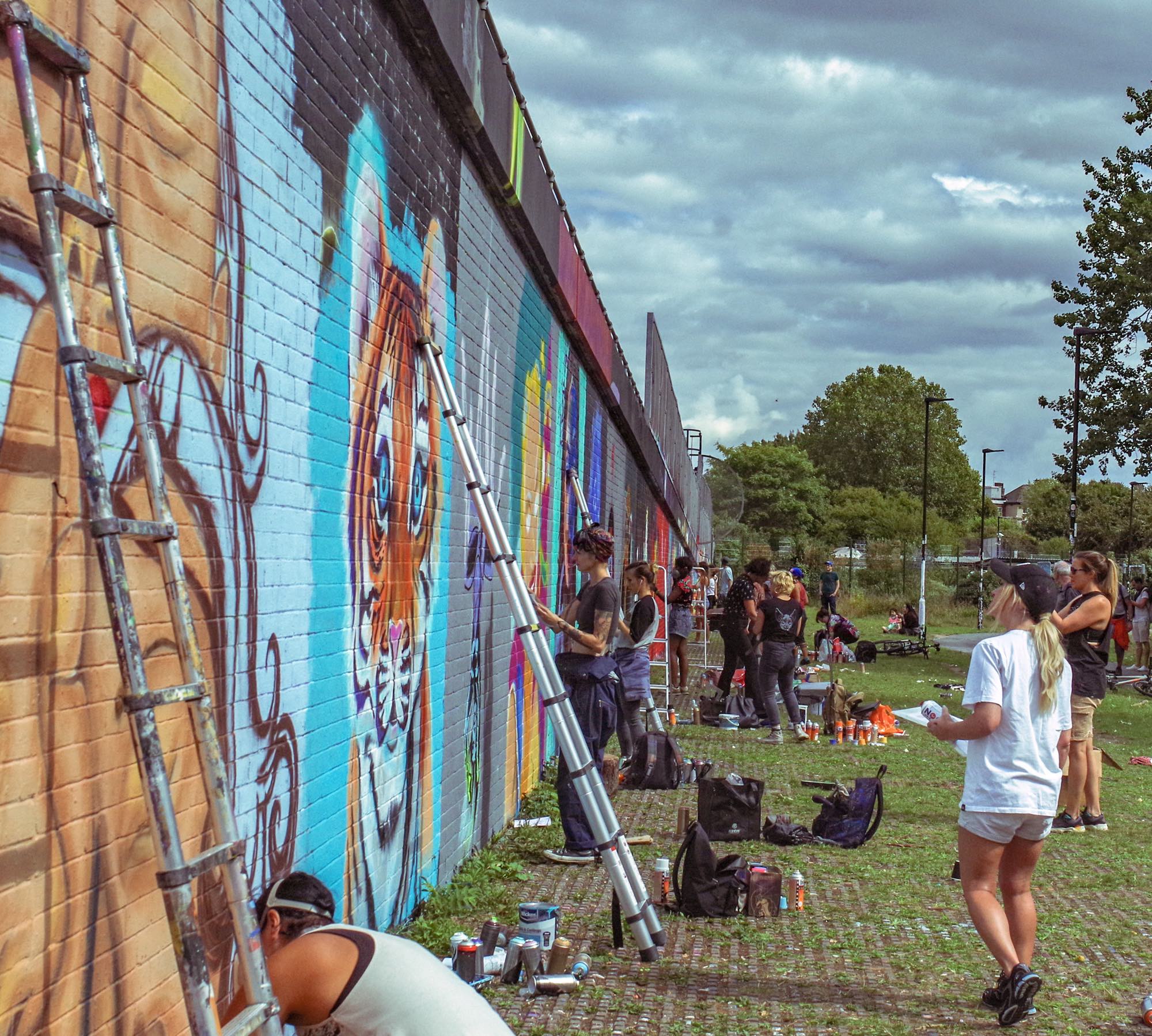 In conversation, Pinto explains how, culturally, graffiti has consistently been posited as something that is inherently masculine, despite there being a number of female writers on the scene. Women were often seen as the “exception”, rather than the rule: although women have always been there, they’ve never quite been allowed into the club.

“Because it’s an activity that is sometimes illegal, even if it’s not illegal, writers tend to write in the most inaccessible sites, [to] prove that they are courageous and defiant,” Pinto says. “This is maybe why graffiti writers may be hostile towards women. When a mural is explicitly political, and in this case feminist, I think it’s even more vulnerable to being defaced.”

Artists like Sophy, however, are hoping to inspire a new generation to do things differently. Her graffiti workshops are one such example. “I feel like it’s empowering especially when boys are first introduced to graffiti by a woman as it’s turning an established gender role on its head,” she says. “Quite a few girls have written to me online so I’m hoping it has inspired them.”

Another group of women hoping to change the scene is WOM Collective, who claim to be London’s only other all-girl crew.  Whereas Girls On Top got their start illegally tagging and painting on trains, WOM operate differently. They have a website, official social media accounts with thousands of followers, and organise official events like their popular all-girl paint jams. WOM even have their own studio, where co-founder ELNO calls me from, her pink hair clashing with paint-splattered wall behind her.

Although she faced her own challenges coming into the UK graffiti scene from Barcelona, she found power in the strength of the community. For ELNO, being part of a collective is about inspiring other artists to believe in their own work. “Any gender, as artists we suffer sometimes as we don’t value ourselves properly,” she says.

While ELNO acknowledges the patriarchy in which she exists, she is passionate about fighting the idea of women artists as victims. When she’s painting her fantastical women characters, ELNO celebrates the power of femininity. She hopes that WOM will one day be a global crew and inspire similar grassroots collectives around the world.

“We have to show our talent and we have to work hard … There are more platforms for women and it’s a good time for women to join together. I can see, there’s love and female empowerment around.” 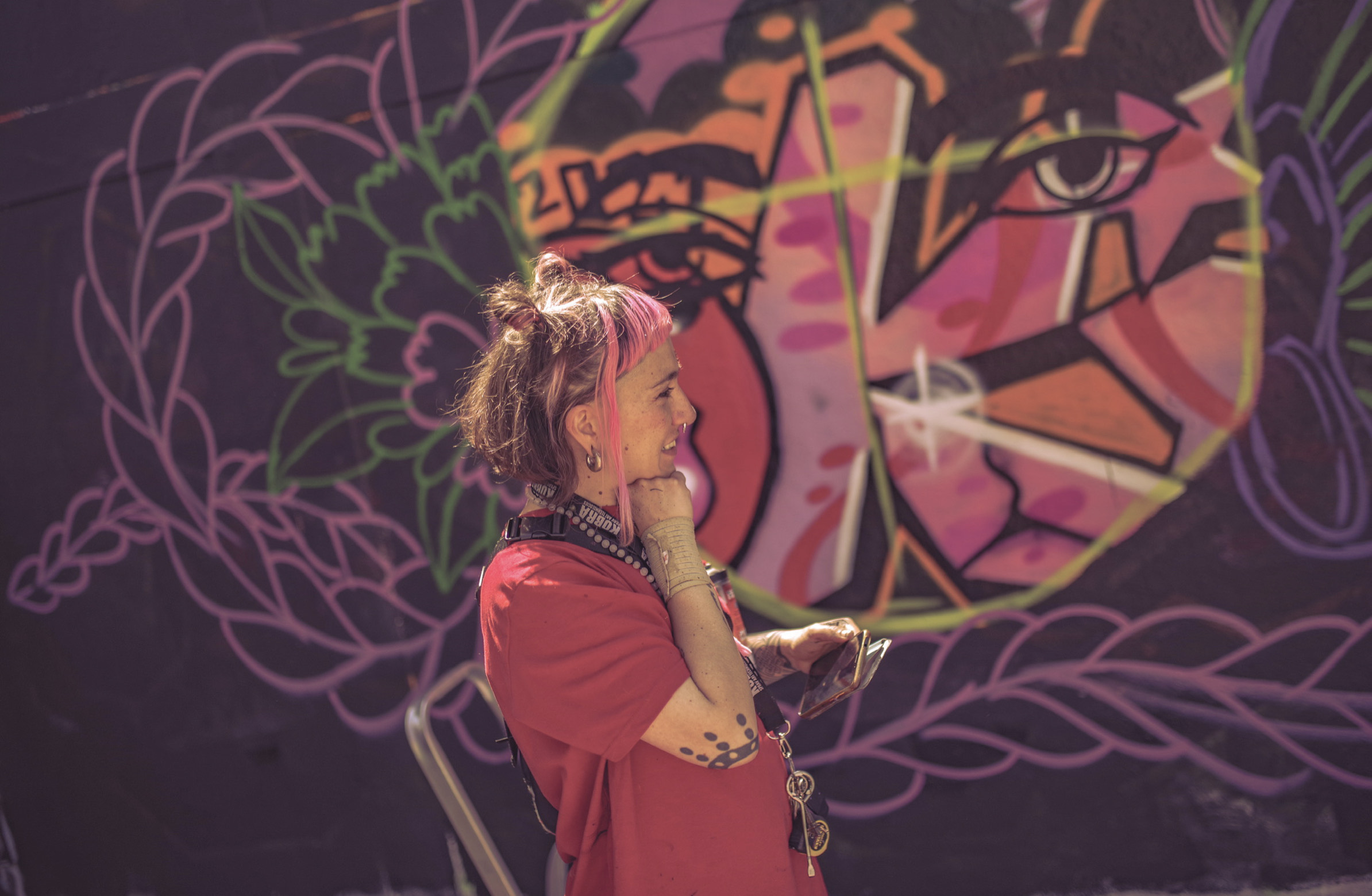 Linkedin
RELATED ARTICLES
OTHER ARTICLES
By turning a real-life crisis into daytime television fodder, TV bosses have once again shown themselves to be completely out of touch with audiences.
With skyrocketing rents, packed out viewings, bidding wars and more, renting in London has never been harder.
Rogue landlords are exploiting young and inexperienced renters and leaving them in mental and financial turmoil, reports Niall Hignett.
In his 2008 series, the photographer pictured himself as Angela Davis, Martin Luther King Jr., Malcolm X, and other prominent figures.
For over a decade, gamblers have won big by employing people to place live bets from the court. But does this dubious method still work?
Sean Maung’s photos are a love letter to the Black and brown communities that make up New York.