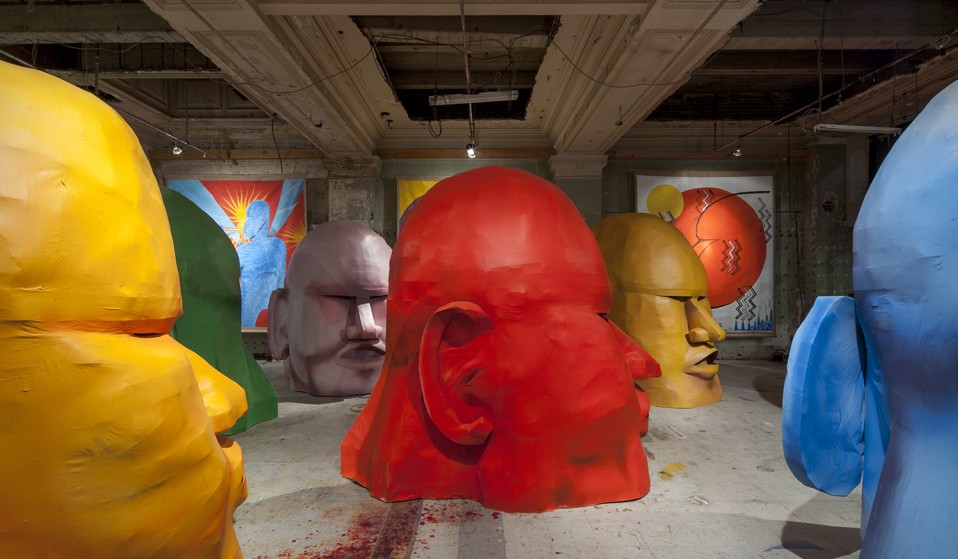 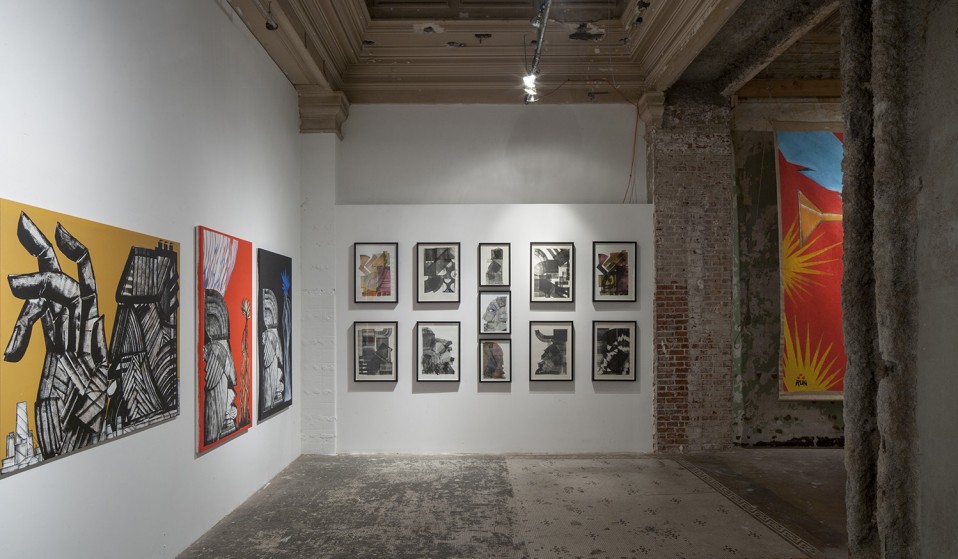 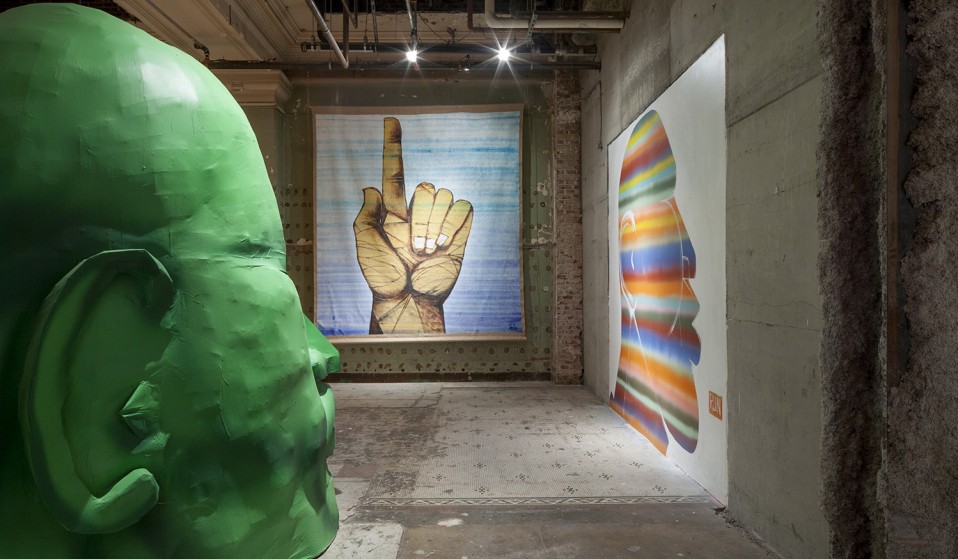 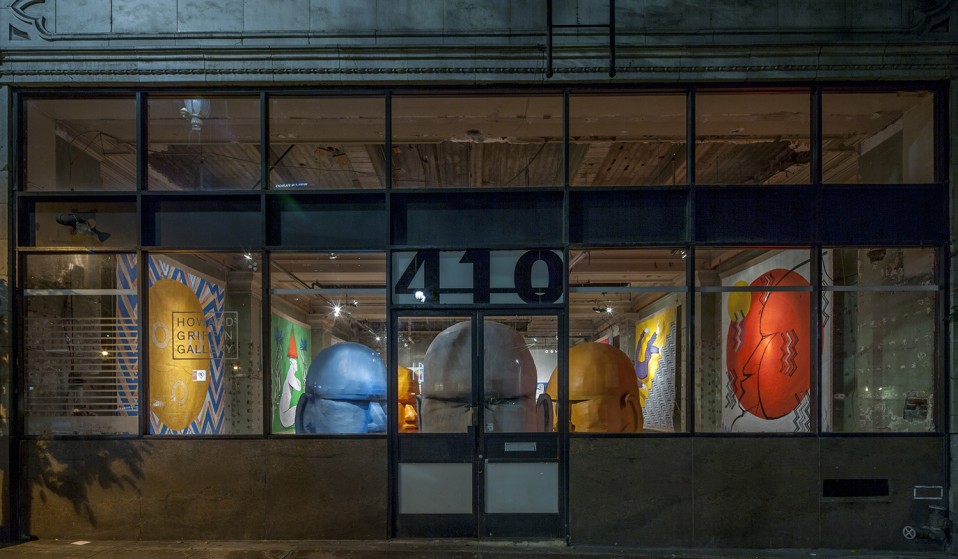 Have we become 21st Century gods? Giacomo Bufarini aka RUN’s new show Man is God questions our relationship to the world around us.

Have we become 21st Century gods? Giacomo Bufarini aka RUN’s new show Man is God questions our relationship to the world around us.

When RUN was living in squats and painting on trains and lorries in Bologna and Florence during the early ‘90s, he wasn’t thinking too philosophically about what he was doing. But as he powered the Italian underground’s march across Europe, his trademark hands and interlocking faces helped inspire a revival of muralism across the continent.

Eventually, as he moved from the street in to the gallery and began displaying under his real name Giacomo Bufarini, he began to consider deeper questions in his art. His new show Man is God at Howard Griffin Gallery asks viewers to consider humankind’s place in the world, and poses the question: has 21st century man become his own god?

Wandering among the huge heads that dominate the gallery space, the combination of neolithic and modern imagery presents a world where man and nature live together, intimately connected with one another.

Do you remember the first time you painted on the street?
It wasn’t my very first painting on a wall, but the most important in the beginning was in an abandoned building in Florence, a theatre from the 1600s where me and another hundred people squatted for at least ten days before the government moved us out. I painted a three-storey character by climbing a ladder made out of wooden pallets and found pieces of scaffolding. The piece was a man with four arms and it ruled the space. From that moment on I understood the importance of leaving a mark wherever I went. 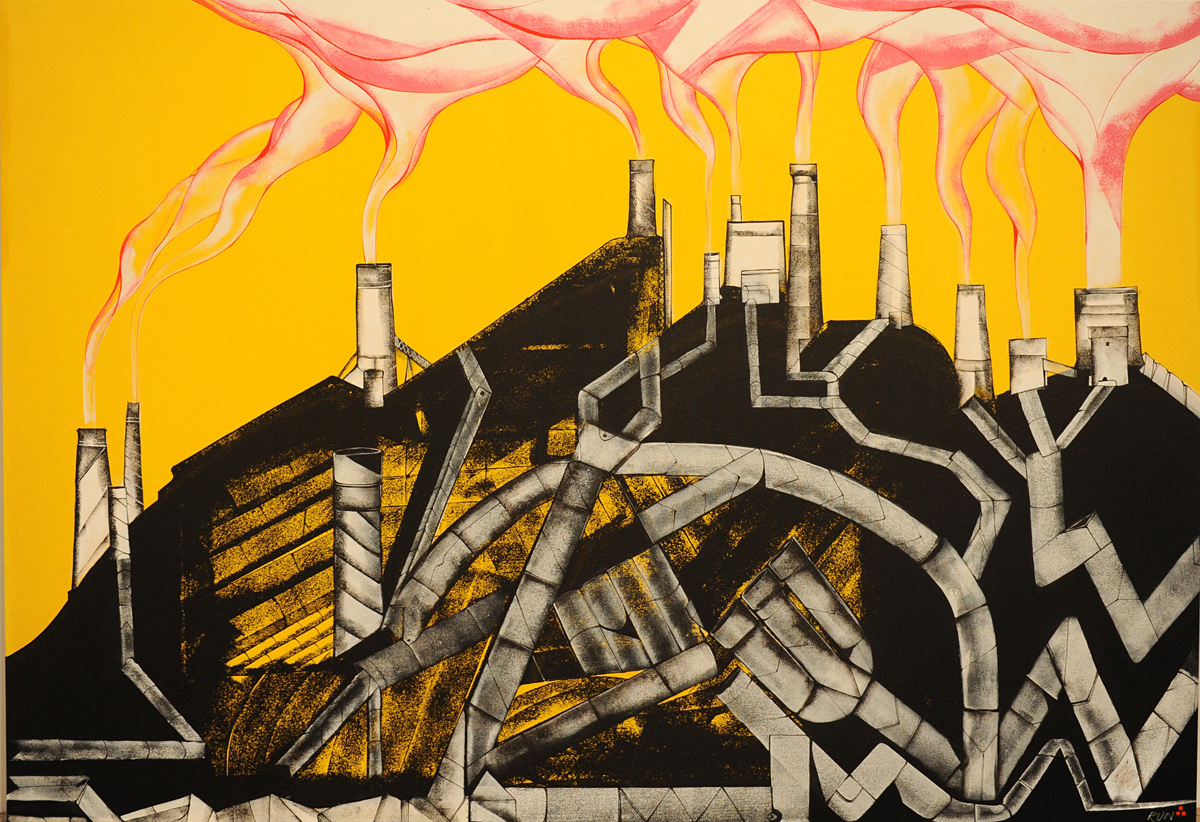 Street art has exploded over the last few years to become an incredibly broad church. What are the new developments that particularly excite you right now?
The interaction with the space around it is what makes street art relevant. The building or the wall is a canvas but it has much more potential than a canvas stretched in a frame. It has limbs and mazes and extensions to it. Street Art could potentially expand forever, everywhere. 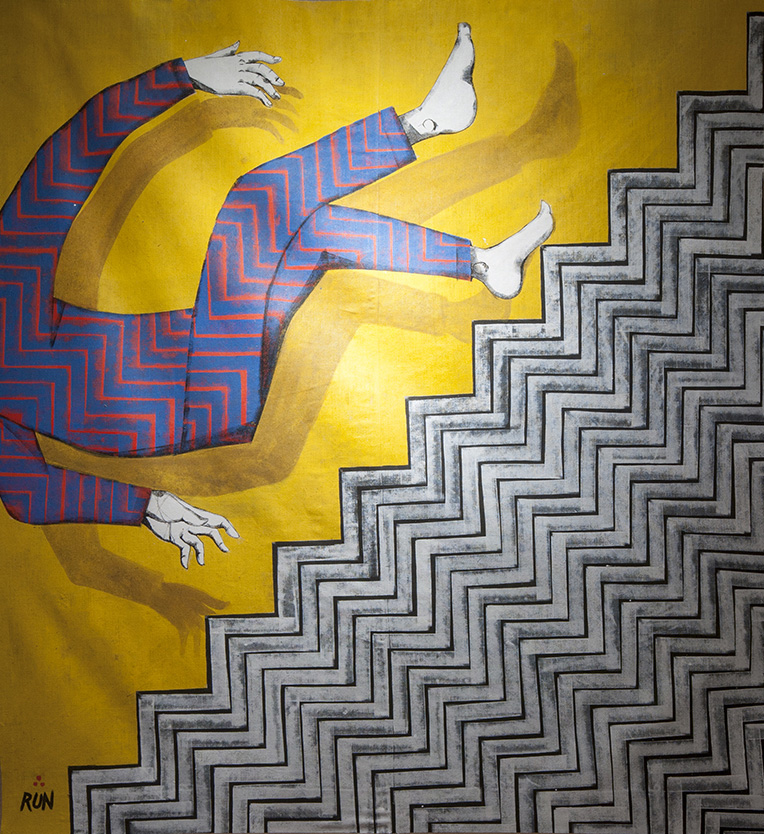 The Pride Of Man Before The Fall

How did the Man is God show come about? What do you mean by ‘Man has become his own god’. Is that something to celebrate or be wary of?
I was influenced by a trip I took early this year during the Summer Solstice to the Avebury stone circle in England. During a walk in the countryside with some of the Radical Anthropology Group of East London I learned how the primitive society had built these massive monuments to celebrate not only pagan Gods but also themselves, their unity and their power and strength when they act together. I don’t think things have changed that much. We still need each other and we still celebrate life in many different ways. 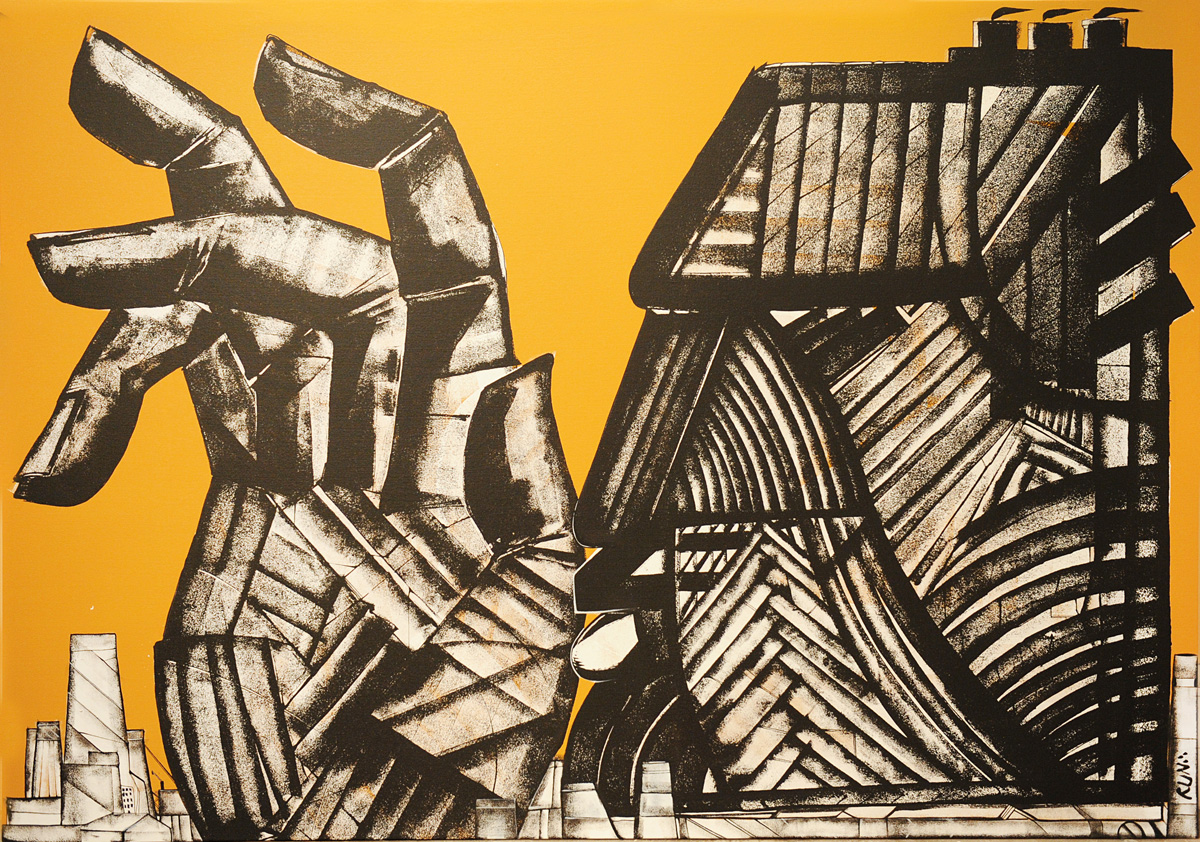 One thing I found amazing – one of the theories about the stone circle – is that these monuments were an alternative to war. When a clan built a circle of stone it was proof that they were strong, well organised and united in hunting and celebrating their tribe. It was a signal to others that said: ‘Don’t mess about; look at us, look at what we can do.’ I found the same in graffiti when it started in the 1970s – it was a way to challenge gangs without guns and knives but with spray and dance and rapping. 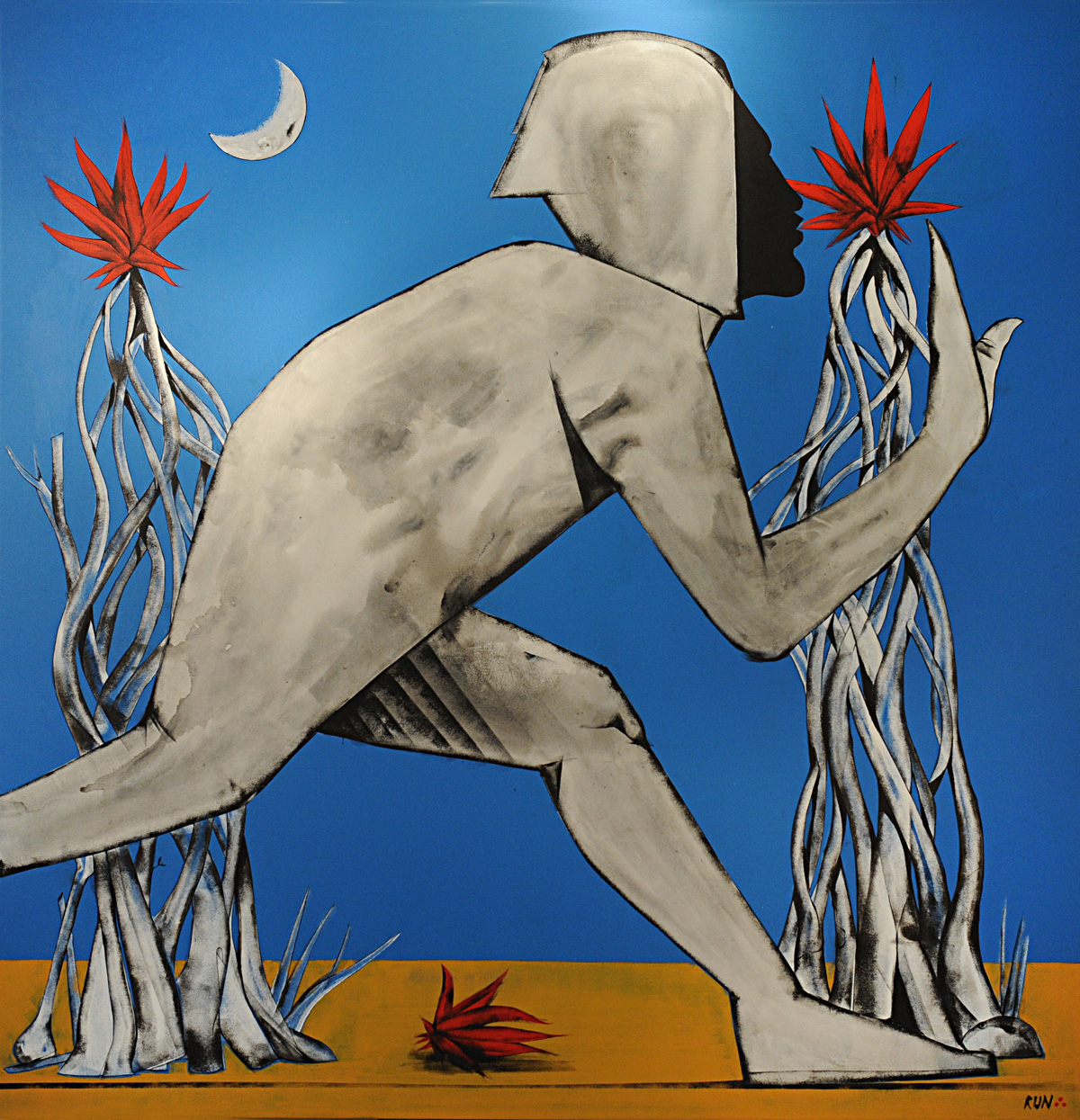 Could you talk about the heads? What inspired them, how did you build them and what do they mean to you?
The heads have multiple functions. They tell the story of ancestral monuments. They create this separation of tribes that live in the same environment (the city) and they interact with the space of the gallery which is huge. The heads also inspired the title; like other ancestral civilisations, building human heads is for celebrating life and nature. God is Man could be the title. 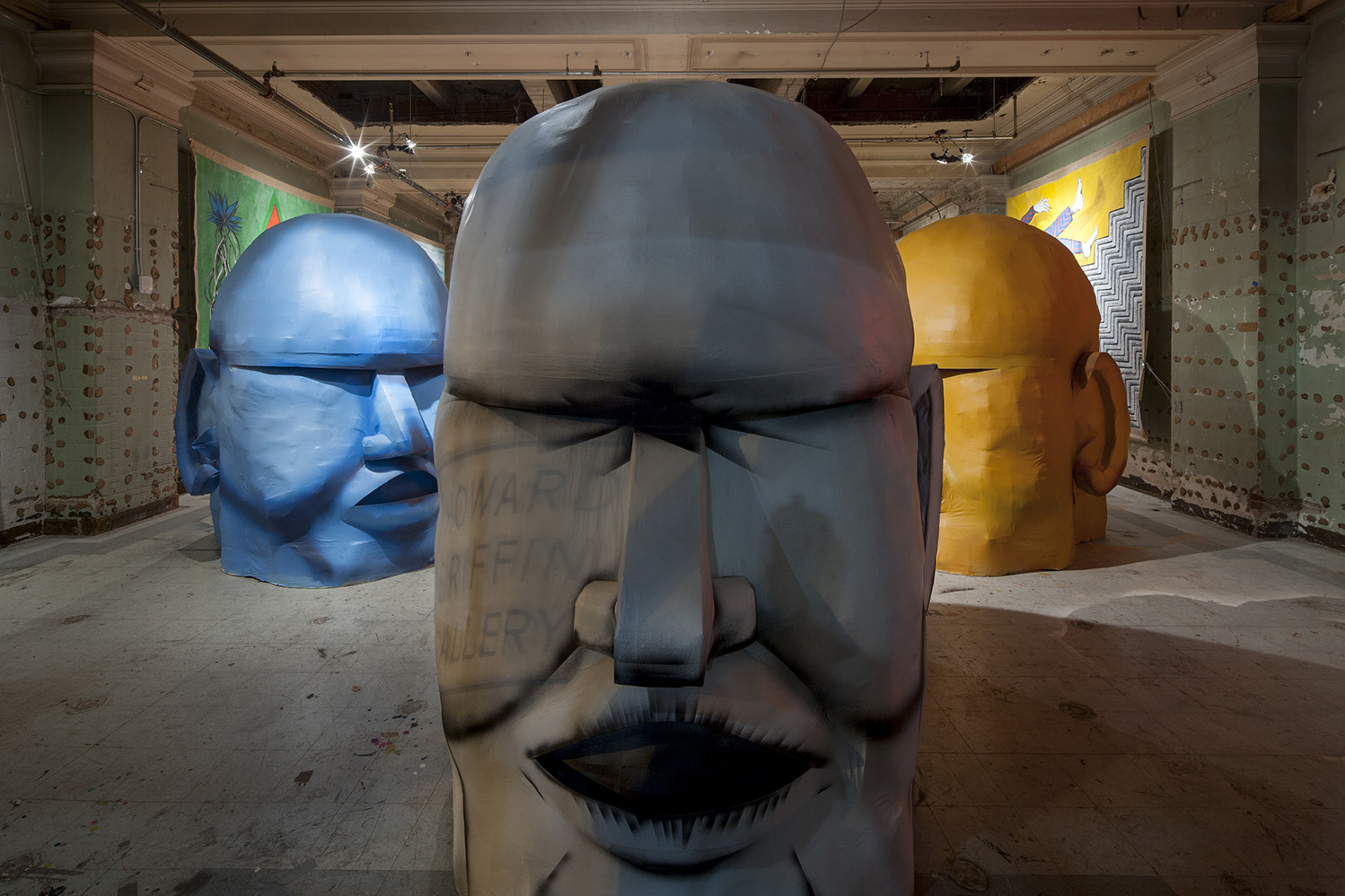 The title is ambiguous; it could seem arrogant. What I believe is that man is not God, God can be found outside in nature, but God is also inside of us, certainly not for me in a church or in any temple. God is the sensation that we are here and God is what we breathe. It all sounds very spiritual, and yes, why not! We are spirit after all – and spirit is all that is left at the end. 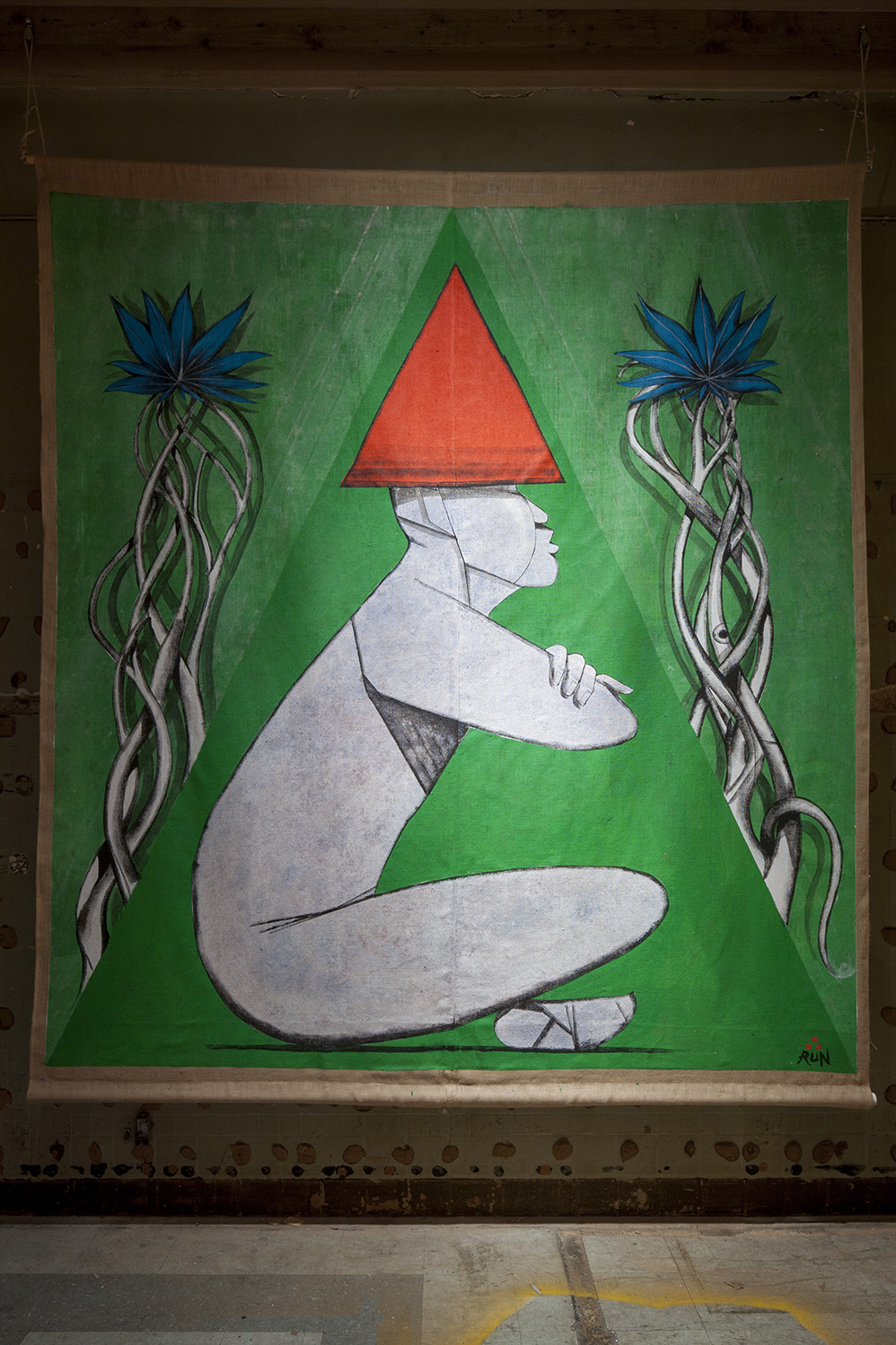 Are there any indigenous cultures that have particularly inspired you? Have you ever visited an ancient site or seen an ancient artwork that has particularly inspired you?
I’ve seen Hindu temples, Buddhist temples and the stone circle in England. I’ve visited the Vatican and many churches. I’ve been to a mosque in London, and I’ve been to cemeteries that are as big as a city. In all of those places you can feel the presence of something, a sensation that is different, but all of it has been built by the hand of man, with labour and sacrifice. A wood or the ocean contains God more than everything and is there and always will be. Amen 🙂 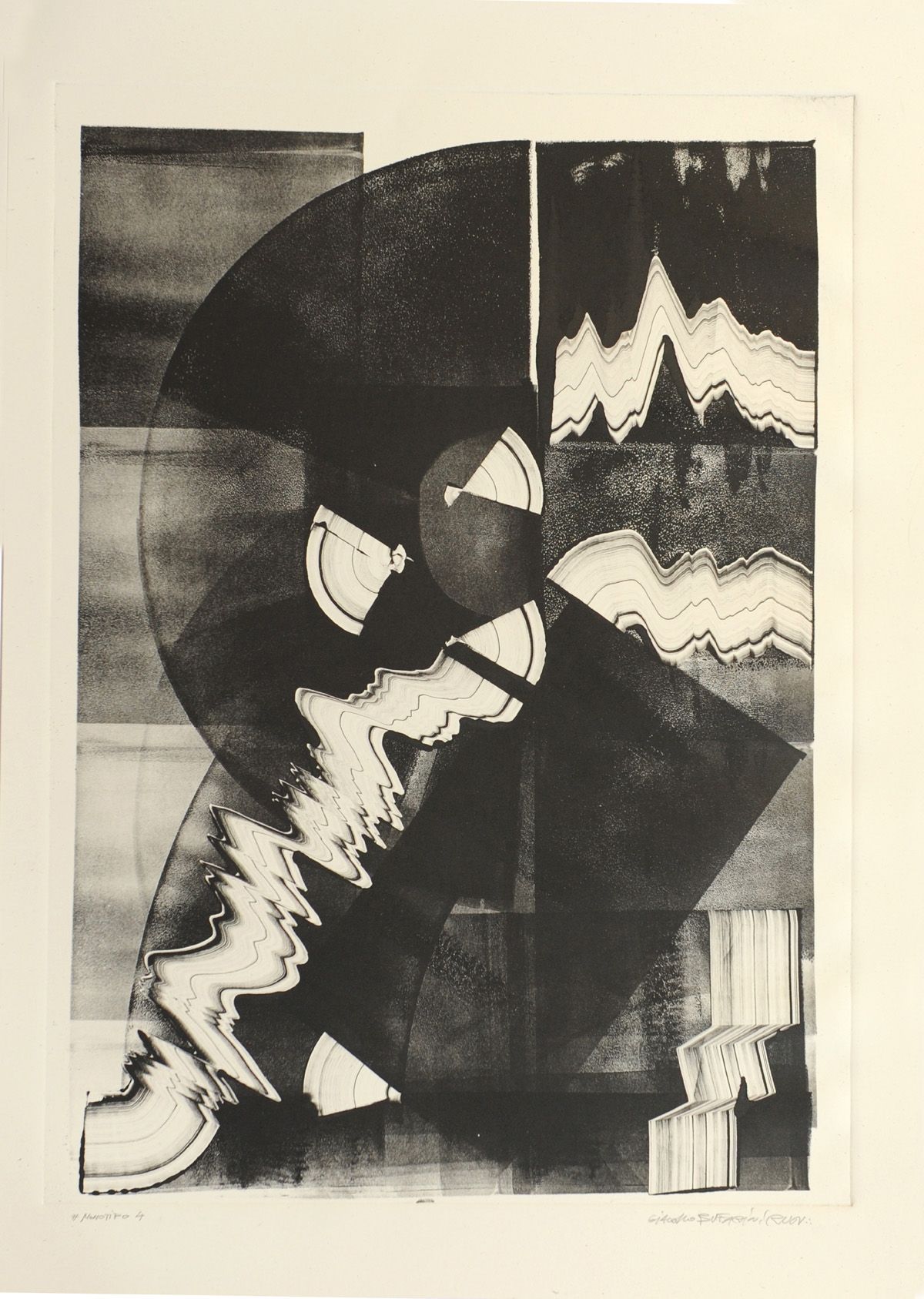 I love your Constructivist-style pieces. Are there any other artists or art movements people might not expect you to be into? If so, what do you love about them?
These pieces are the beginning of something new for me. I’ve discovered that I can be abstract but it took a while; it’s almost against my rules. After a long time I’ve been able to break those rules and be free. 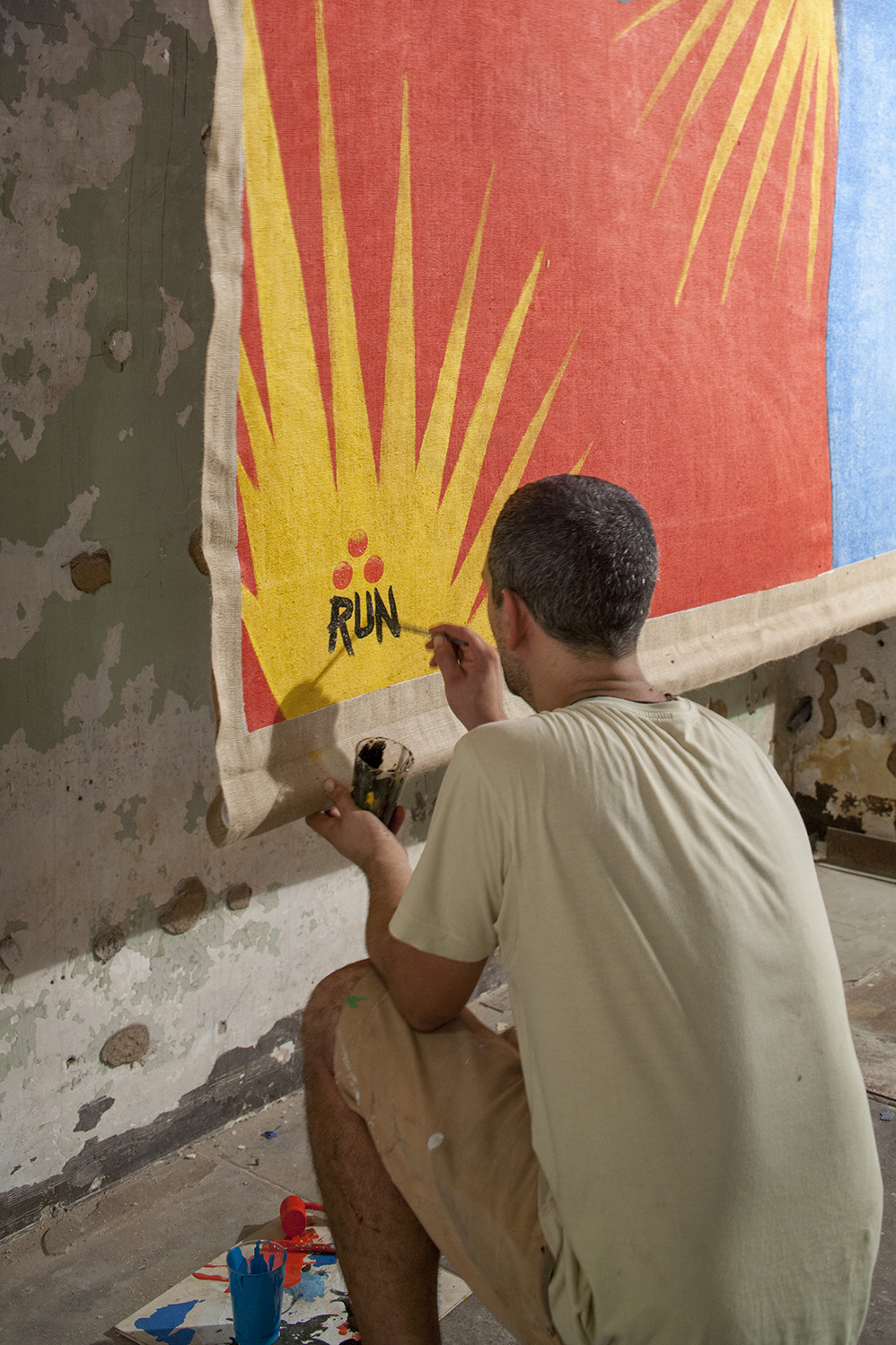 I love pragmatism applied to Art. Constructivism in Art and Futurism are a big focus for me now, because I think so differently than that, and I want to learn how to think that way. At some point I wanted to avoid using my own brushstroke. I am trying to have another me inside and see what happens. I almost want to tie my hand up with a rope and try to draw like that. It would be a challenge, a sacrifice and a spiritual exercise. I want to learn more every day and I’d like my art to have a social purpose.

Giacomo Bufarini aka RUN’s Man is God is at Howard Griffin Gallery, Los Angeles until October 31.

Linkedin
RELATED ARTICLES
OTHER ARTICLES
Artist Clet Abraham’s mischievously modified signage subverts authorities’ attempts to make us obedient citizens.
Underground graffiti collective Broken Fingaz spring up in LA for a mesmerising show that takes on sex, death, Indian spirituality and capitalist advertising.
Street artist Bleeps.gr was making street art long before the economic crisis hit Greece. But with the social and cultural impact of the nation's turmoil, his art has reflected the changing views of the dissatisfied voices he comes into contact with. His identity is anonymous, but he won't stay quiet.