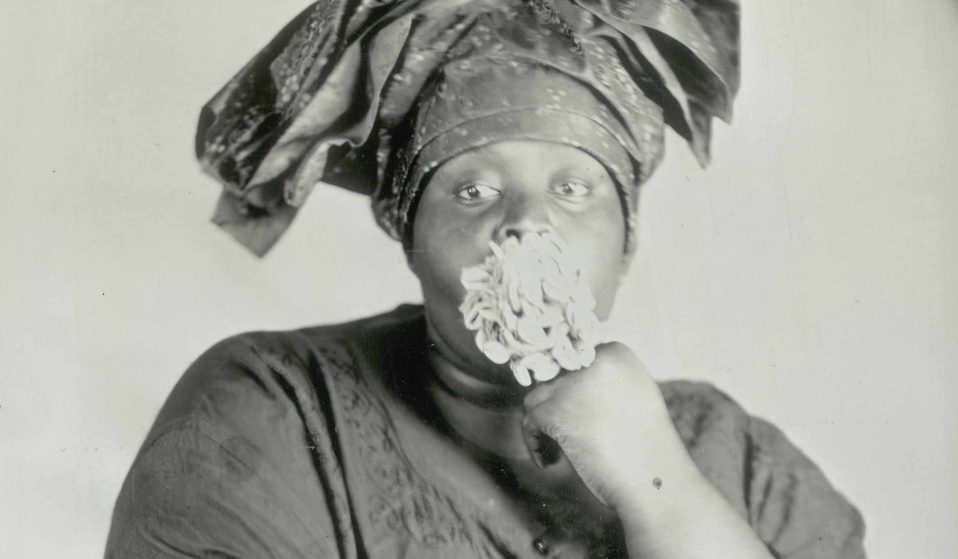 The Gambian-British photographer, who tragically died in the Grenfell Tower fire in 2017, is being celebrated in a new public art project.

The Gambian-British photographer, who tragically died in the Grenfell Tower fire in 2017, is being celebrated in a new public art project.

Born and raised in London, Khadija Saye was a young, talented artist on the verge of international success, when her life was tragically cut short in the fire that engulfed Grenfell Tower in the early hours of June 14, 2017. Earlier that year, Saye had reached a spectacular milestone in her career, as her work was exhibited at the Venice Biennale alongside some of the biggest names in British art.

Saye was given her first camera by her father at the age of nine, but never considered photography as a career until years later. At 16, she won a scholarship to the prestigious Rugby School, before studying photography at UCA Farnham. It was there she began making work exploring her personal, cultural identity and multi-faith heritage.

Her graduation project, titled Crowned (2013), was a photo series celebrating Afro-Caribbean hairstyles, in which she photographed friends, family and neighbours in her family home on the 20th floor of Grenfell Tower. Following university, Saye found a mentor in artist Nicola Green and befriended Green’s husband, Labour MP David Lammy.

Saye was politically engaged in both her work and personal life, and passionate about social justice and educational inequality. In her spare time, she volunteered at Jawaab: a charity that educates and empowers young Muslims. 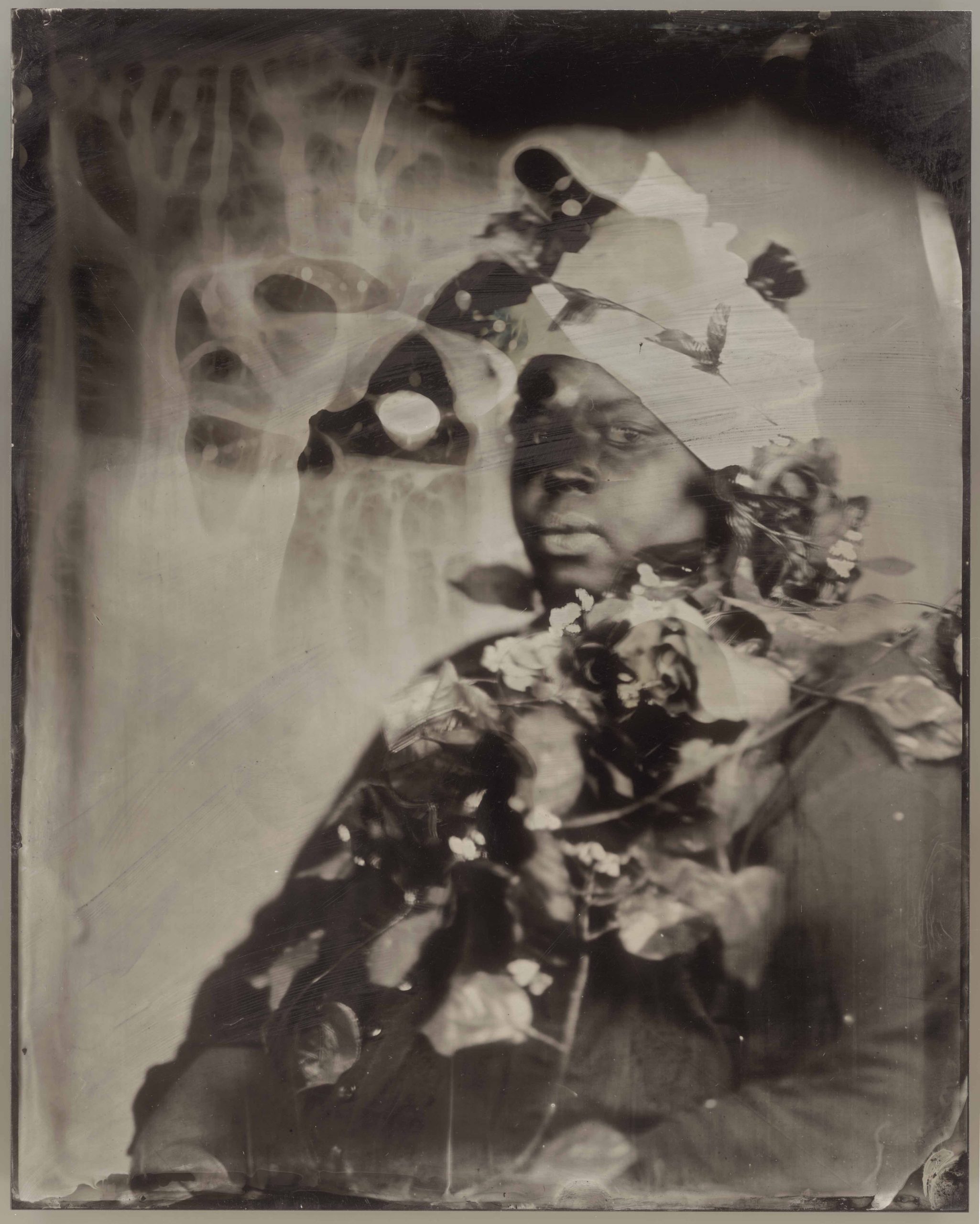 Now – three years after her death – her photography is being exhibited in the streets of Notting Hill to commemorate her talent and legacy. In this space we breathe (July 7 – Aug 7) is an installation of nine large-scale prints of Saye’s most acclaimed works shown across the façade of 236 Westbourne Grove. Created using the 19th-century tintype technique, Saye explores the migration of traditional Gambian spiritual practices.

She said of the series: “[it] was created from a personal need for spiritual grounding after experiencing trauma. The search for what gives meaning to our lives and what we hold onto in times of despair and life-changing challenges.”

“Using myself as the subject, I felt it necessary to physically explore how trauma is embodied in the Black experience. Whilst exploring the notions of spirituality and rituals, the process of image-making became a ritual in itself.”

Portfolio sets of Saye’s silkscreen prints are now available for sale, with the proceeds going to directly support both The Khadija Saye IntoArts Programme and the Estate of Khadija Saye. 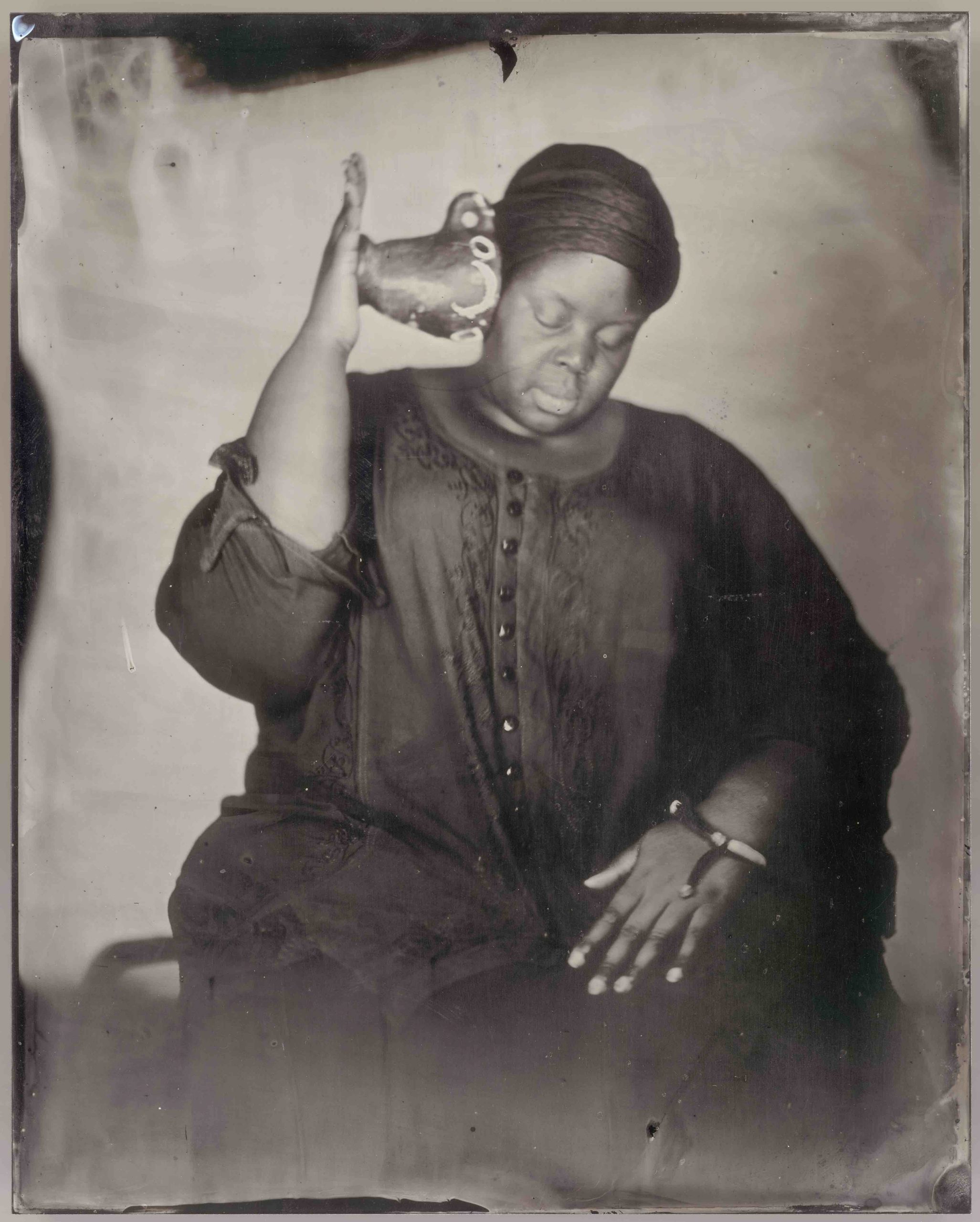 The exhibition – founded by Eiesha Bharti Pasricha and curated by Sigrid Kirk – coincides with the launch of the Khadija Saye IntoArts Programme. Started by Kaye’s former mentor Green and IntoUniversity, which nurtured her artistic talents from a young age, the initiative aims to address the lack of diversity in the UK arts sector by providing opportunities to young people from deprived and ethnic minority backgrounds.

Working collaboratively with young creatives and local arts organisations, Breath Is Invisible was born out of an urgency to address issues of inequality and social injustice. Saye’s work is the first in a series of three exhibitions. Later this summer, artists Martyn Ware, Zachary Eastwood-Bloom and Joy Gregory will exhibit new commissions developed in partnership with the local community.

Following from Saye’s exhibition, Martyn Ware will present to be invisible (11 Aug – 4 Sept), an aural-visual 3D installation based on Curtis Mayfield’s song of the same name. Inspired by current events associated with the Black Lives Matter movement, Ware’s soundscape overlays the sounds of the city with a narration of Mayfield’s emotive lyrics to produce a meditative ‘fever dream’. 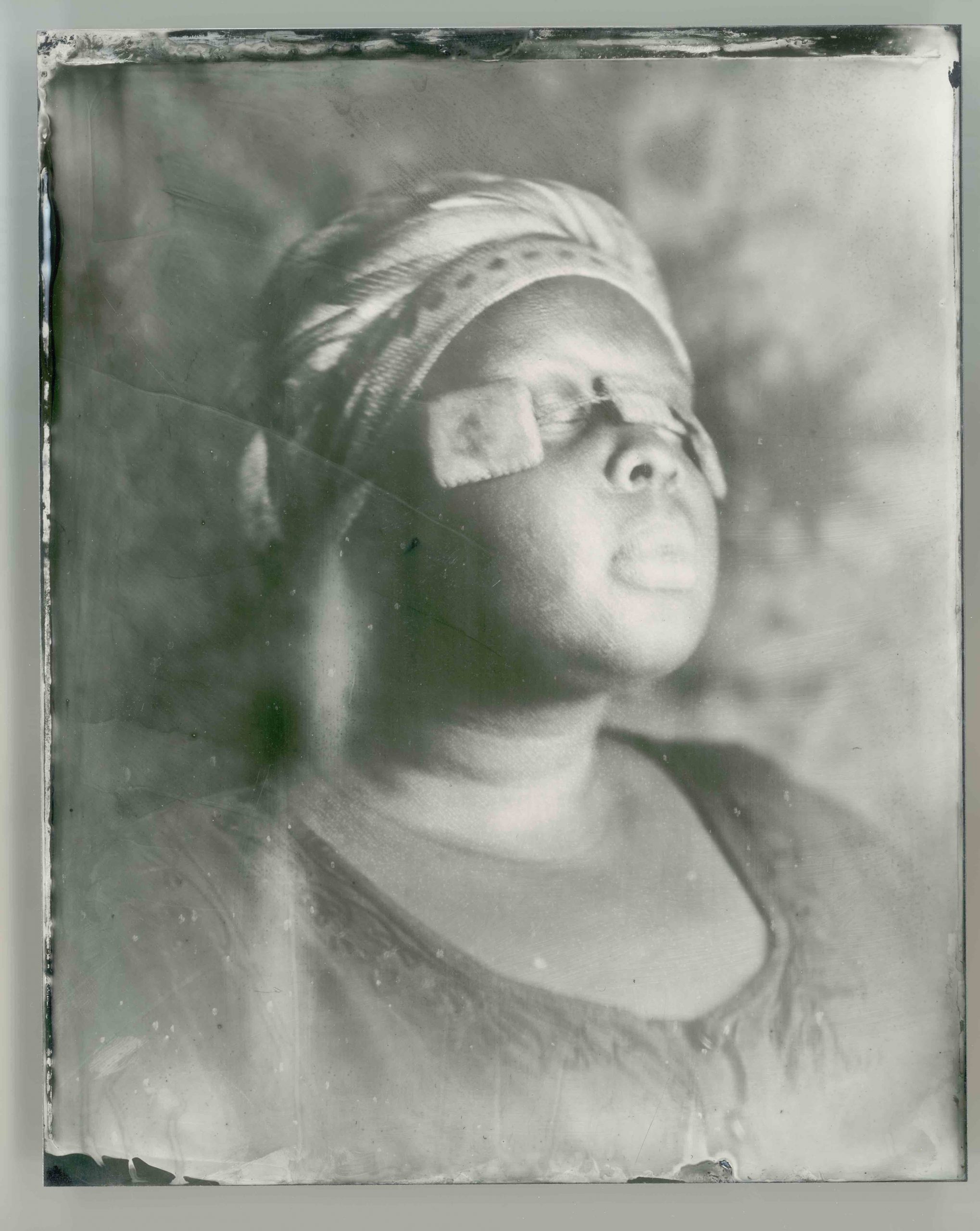 The work also features audio contributions from young musicians from Amplify Studios on Portobello Road. Using bio-feedback from the composition, artist Zachary Eastwood-Bloom has created a generative digital 3D rendering – a visual representation of the effects of racism that will be projected on the windows of the building.

To round off the series, Joy Gregory will showcase The Invisible Life Force of Plants (8 Sept – 9 Oct). Her research-led project examines the history of botany between the 17th century and the 19th century. She reveals how plants we think of as ‘native’ to this country often have origins elsewhere.

Gregory says, “my research led me to look at my own personal history through the narrative of plants, their relationship to human ecology and the environment and the idea of plants as a life force.”

Working with local youth from The Harrow Club, Gregory has collected and dried plants gathered from West London’s community gardens, parks and pavements, to create a collection of lumen prints and cyanotypes. 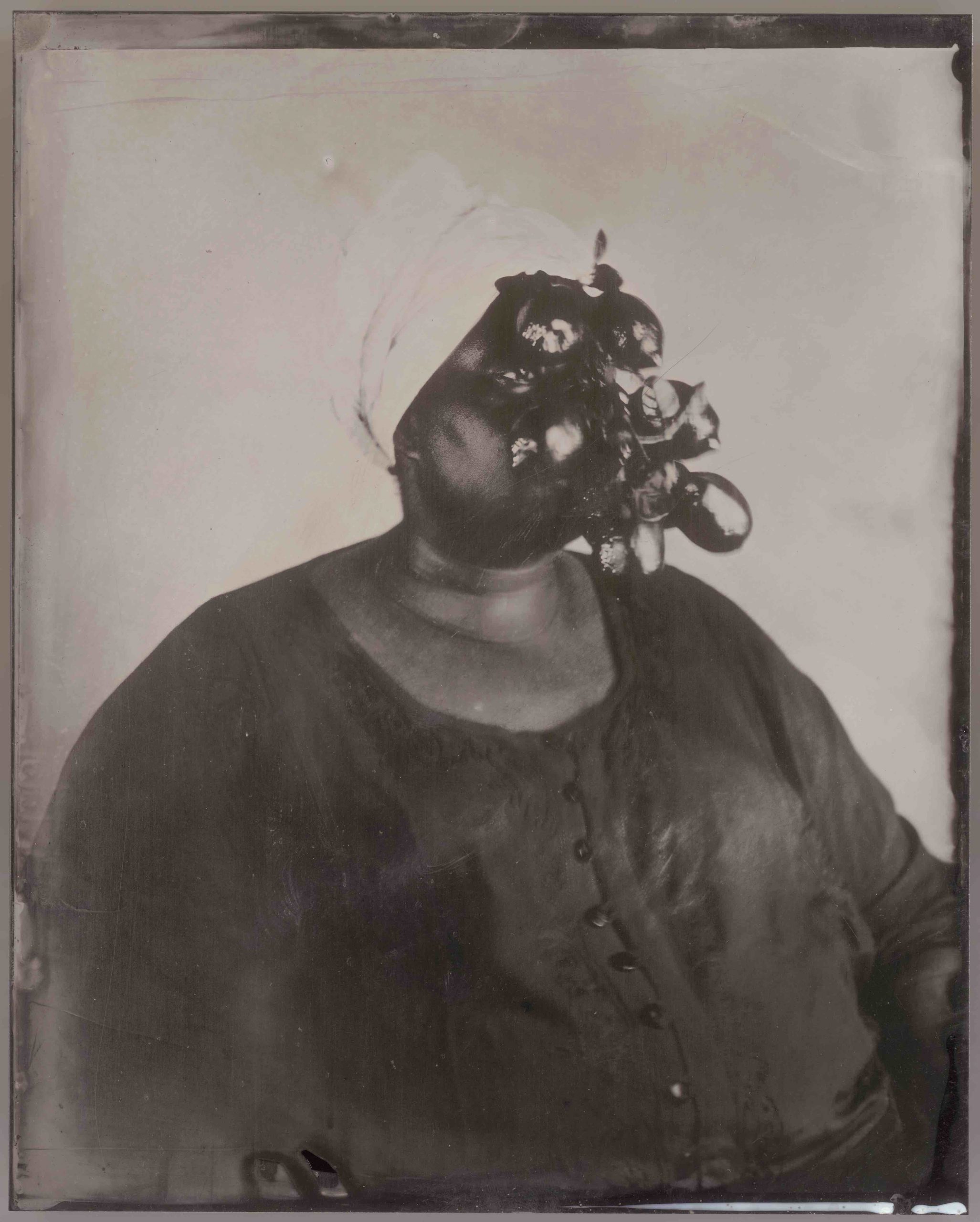 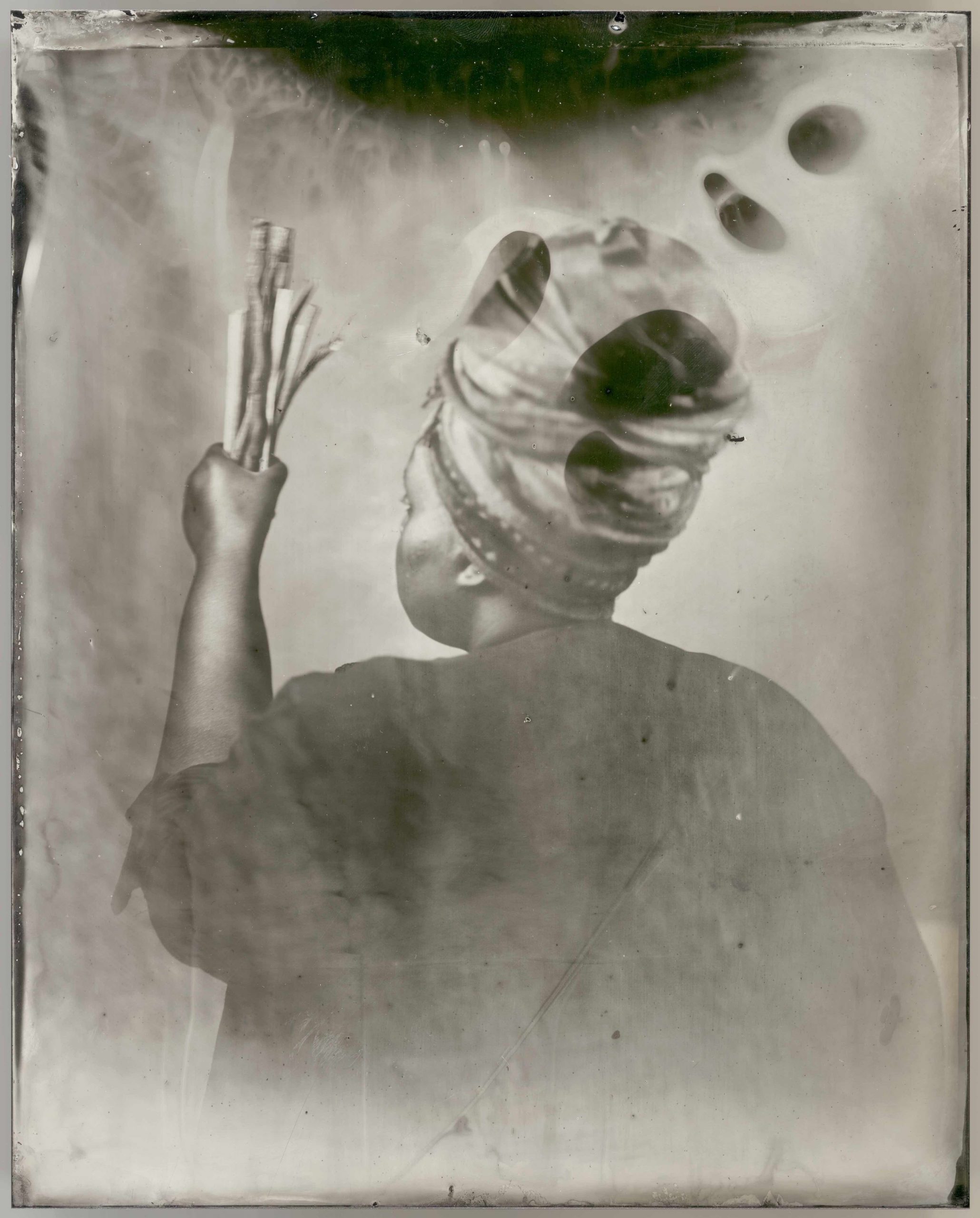 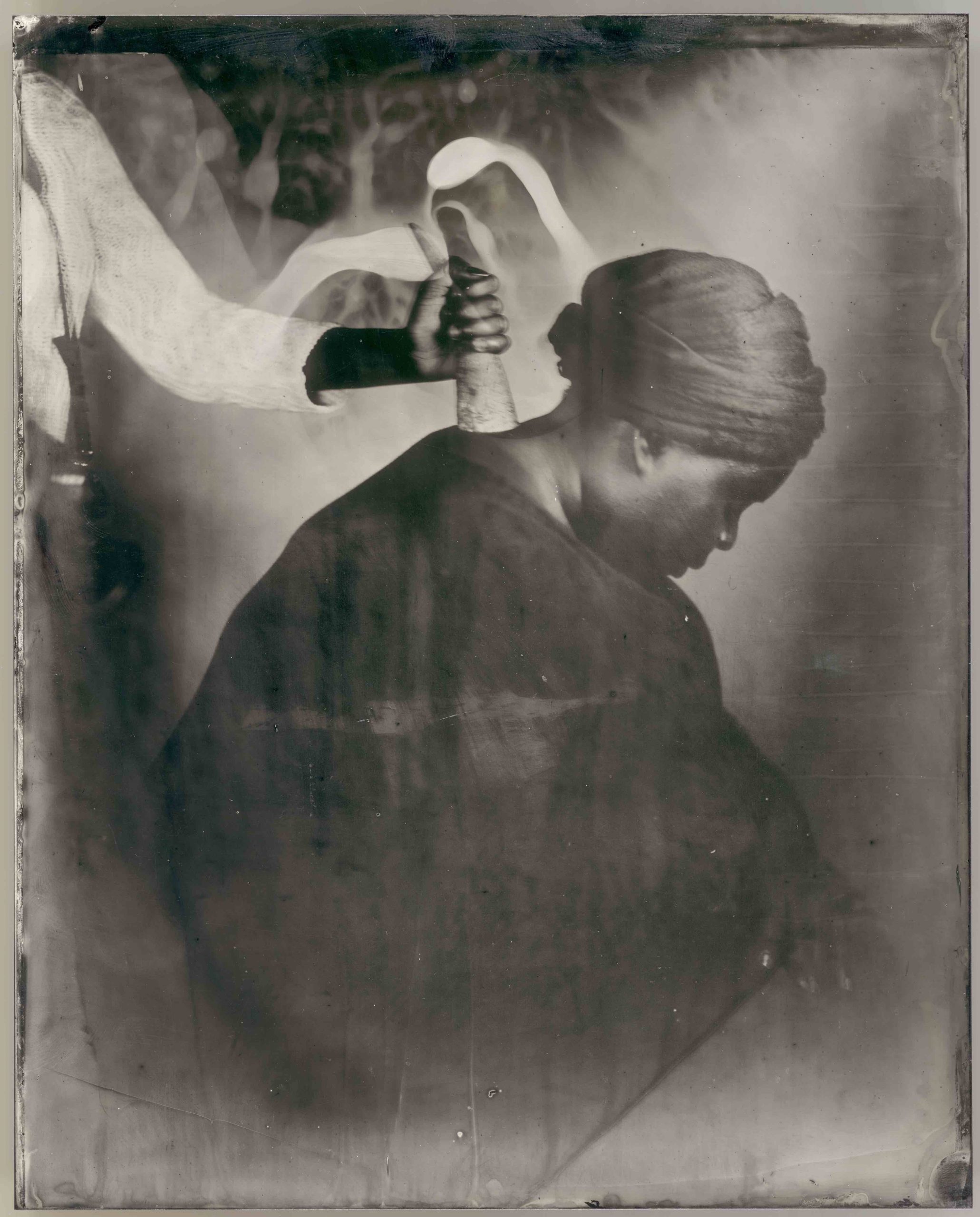 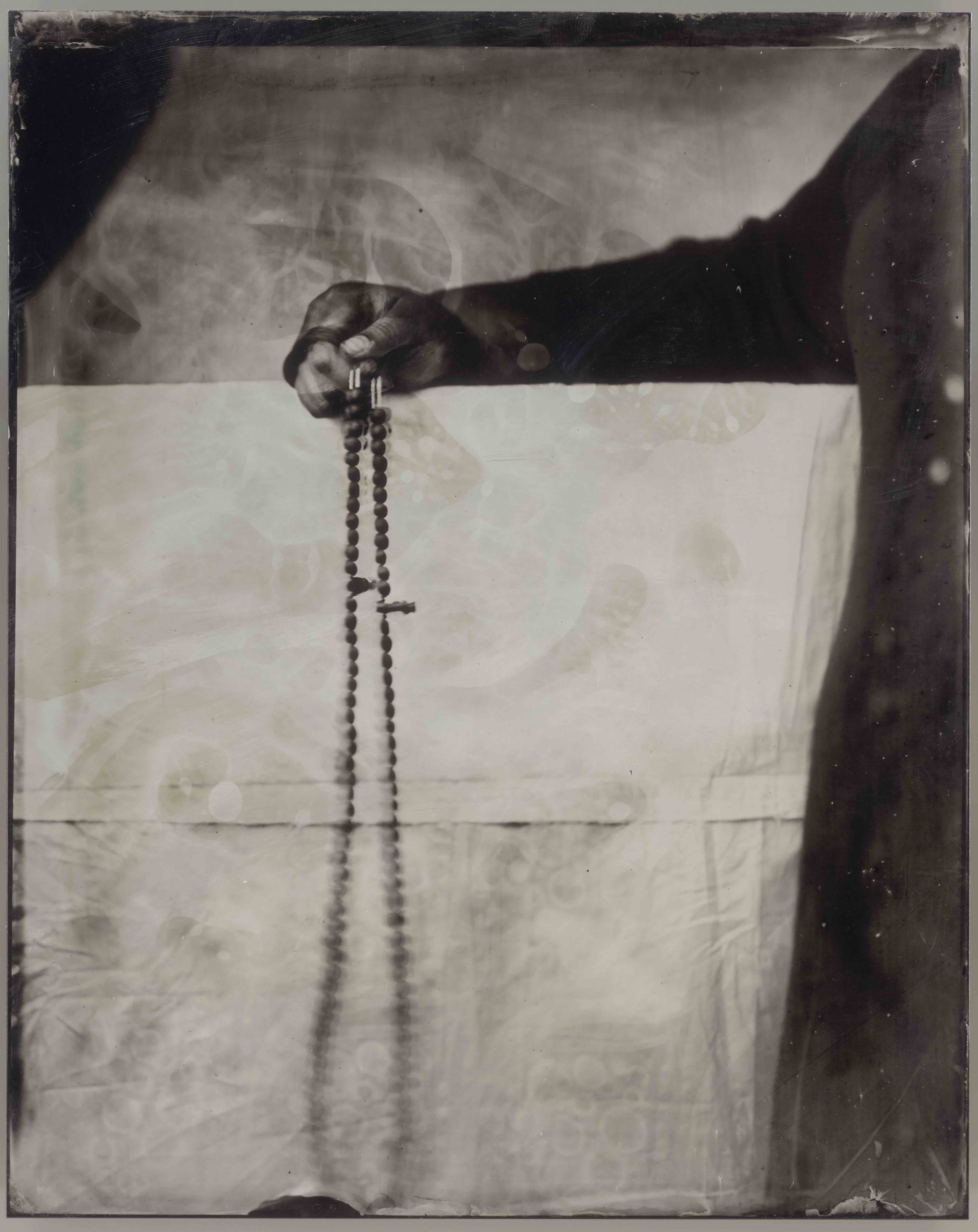 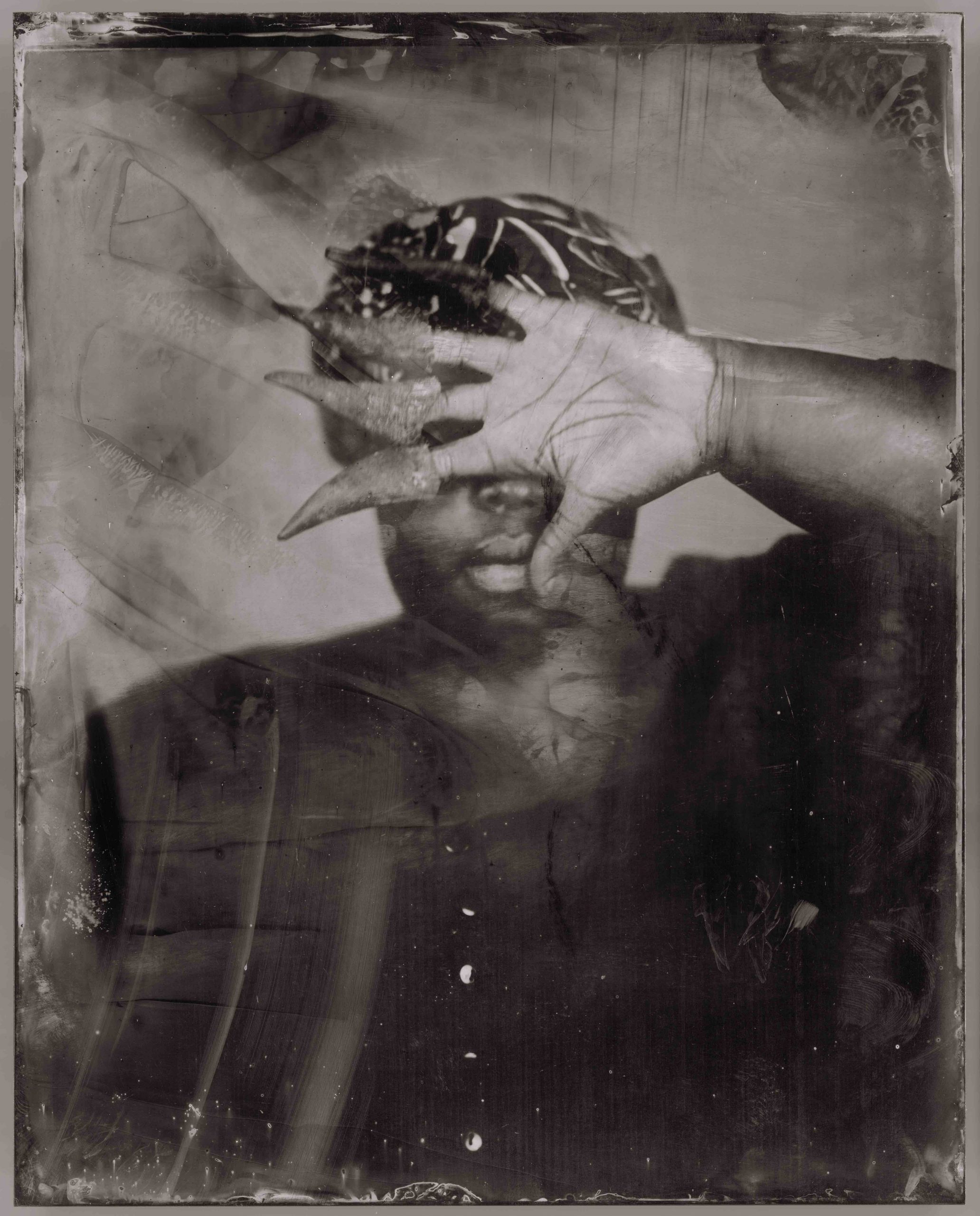 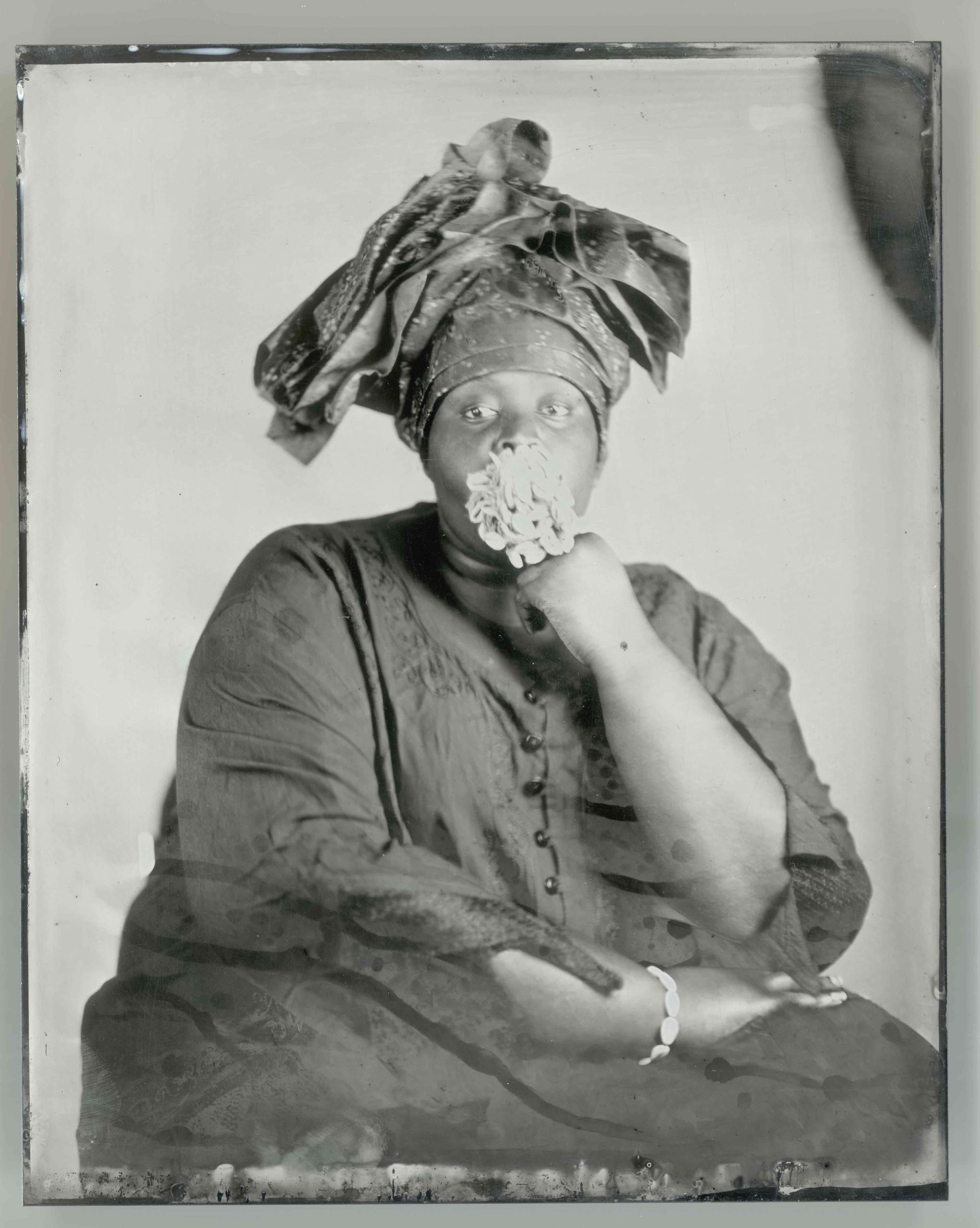 You can see Khadija Saye’s work in the first instalment of Breath is Invisible at 236 Westbourne Grove, London W11 2RH from 7 July – 9 October 2020.

Linkedin
RELATED ARTICLES
OTHER ARTICLES
After building his reputation covering the US civil rights movement in the 1960s, the photographer went on to produce some of the most enduring images of the past century.
The pro skateboarder withdrew from the 2020 Olympic Games so he could come out as trans. Now, he’s hoping to encourage others to live as their authentic selves – within the sport and beyond.
Taking us through one of the most dynamic years in recent history, Laylah Amatullah Barrayn new photo book contains tender yet confrontational portraits.
Photographer Sean Maung reflects on documenting a small town in Pennsylvania afflicted by high levels of unemployment, poverty, violence, crime, and addiction.
Activists and campaigners are fighting back against new laws that would seriously undermine the ability to take industrial action, calling it an attack on fundamental workers' rights.
The first-generation graffiti artist reflects on the tagging’s emergence as an art form and the players who pushed the medium forward.