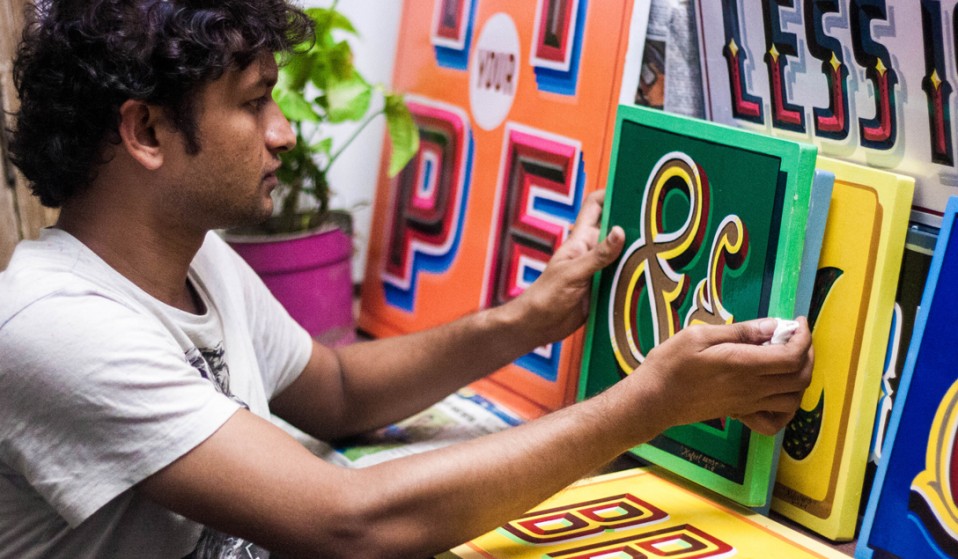 Will the internet save this dying skill?

Will the internet save this dying skill?

Delhi’s shopping hot spot Hauz Khas is bustling with the young and on-trend. Away from the hubbub, up a steep flight of stairs, lies the HQ of handpaintedtype.com – the virtual home of an ancient art form.

The website’s story starts with founder Hanif Kureshi, who was born in the small town of Talaja, Gujarat. “Sign painters are as revered as MF Husain in my town,” he says, referring to late artist Maqbool Fida Husain, known to many as India’s Picasso. “That’s what I wanted to be, before I realised that the world [of graphic design] is bigger than sign painting. Today you see a lot less handpainted type on the street and more printed vinyl. So I started to wonder what could connect these [old] painters with the present?”

In 2010, Hanif took it upon himself to preserve India’s rich heritage of handpainted typography – an influential precursor to artists like Aaron Rose, Stephen Powers and Margaret Kilgallen – by ensuring it remained a viable trade. He scoured the brimming labyrinth of Old Delhi for the typographic artisans responsible for the once-ubiquitous rainbow letters blanketing shop signs, tuk tuks and billboards across the city. “I asked them to design their own font, then we digitised them.” Today, handpainted.com is an ever-evolving catalogue of vintage Hindi, Arab, Urdu and English lettering and Hanif’s team work with a sense of urgency to make sure it keeps growing as cheap plastic vinyls, manufactured by desktop publishers and digital agencies in mere minutes, push the street craft to the brink of extinction.

For Hanif, this “fate of change” saw the demise of the Bollywood poster painter. “It’s not about saving, the times are changing,” he says. “New technology is much faster, sharper, cleaner and more professional than these painters. But before they disappear, if I can get them to contribute, at least their kids can go and see what their father did.”

In this spirit, Hanif names each font after its painter. The first typeface was called ‘Painter Umesh’ and could be downloaded for free for non-commercial use. One free font has over 3,000 downloads, while another has been used by Heineken, though Hanif is currently in talks to address their requisition. “They understand we need to come to an agreement. But the great thing is it means I’m seeing the font in other places; it’s becoming a thing from India. Digitising typefaces is what new India is about. It’s not about kitsch, which has been done to death. That’s old India.”

But it’s $50 font ‘Painter Kafeel’ that really gets Hanif going. “I’ve gone through many painters, but only a couple take it seriously, like Painter Kafeel,” he explains. “He has a finish, a polish. I give him jobs as a typographer not as a street painter, and since he started his life has also changed. Before, his audience was Old Delhi’s streets. He’d get maybe 300, 500 rupees. After handpaintedtype.com, he paints in offices, he was featured in The Independent in the UK, people from around the world try and find him to give him a job where he can earn 5,000 rupees. And as he’s gone on he’s earning more and more, because that’s what he deserves. I want more painters like him, but I can’t find them.”

In the walled city of Dilli 6, down a maze of streets brimming with heady spices, Kafeel Ahmed Ansari welcomes us into a two-metre-squared-room with plastic cups of fizzy orange Mirinda, introducing us proudly to family members like his son. Surrounded by life size canvases and piles of poster rolls, we huddle together and talk in Hindi, the only language aside from painting he knows.

Originally from Bareilly in Uttar Pradesh, Kafeel recounts his story. “My father was a shopkeeper but he was also dharmic – an imam in the mosque. He was educated, cultured and cooperative with my dreams. My teacher was an ustad [highly skilled person], he used to teach me calligraphy, so my classmates would get me to write in their notebooks for them. Then there was an artist that used to paint on boards outside his house in the gully. I used to come from school and stand behind him for hours, watching him work.” Kafeel kickstarted his own career by investing in some improvised self-promotion. “I bought a bicycle in 1980 and bolted a signboard on the front and back That’s how I started to get work when I moved to Delhi.”

Today, Painter Kafeel’s folksy truck-art type can be seen on the book cover of Akash Kapur’s India Becoming: A Portrait of Life in Modern India, raved about by NYC critics as the New Republic’s Editors’ and Writers’ Pick, 2012. It’s also graced the sleeve of Amit Chaudhuri’s  Calcutta: Two Years in the City. If the job comes to the artist via handpaintedtype.com, fifty per cent of profits go to the painters, the other half goes back to the cause.

“I get more orders from outside,” explains Kafeel. “Foreigners want more in depth work. Hanif sir gets me orders off the internet, and calls me every two weeks to pass them on to me. My wife complains I haven’t painted her yet, but I am just inundated with work.”

As he rummages through the mass of paintings, brushes and art equipment in the tight space, we discuss the industrialised factories wiping out his craft. “Even a machine needs an artistic operator. If they don’t have a creative brain, they won’t produce the results,” says Kafeel, who’s taught himself to be computer literate through experimental button bashing. Adjusting his glasses, he explains why he believes his work will still always have a place. “Generally you will find thousands of these fonts, but there is something new about my fonts, it can’t be recreated on a computer. There is a finish and accuracy. When I paint, I don’t get up. I really sit and focus, it takes at least twenty hours. There will always be a demand for art, but the artists will wither. Some will stay, but most will go. Of my generation, most have died and only five or so really good ones are left.”

Kafeel’s words echo something Hanif said back on his balcony. As the sun set behind him on an open vista, Hanif contemplated India’s colourful typographic history, which may soon be under the veil of dusk, too: “The transition time is almost over, we’ve almost completely changed. Maybe if you go elsewhere in India, you may see more handpainted type, but not so much in Delhi. If I don’t do this for the next five years, it will be gone completely. As long as it stays on web, it stays. It’s kind of immortal there.”

Linkedin
RELATED ARTICLES
OTHER ARTICLES
Founder of the Third Floor Gallery in Cardiff, Wales, explains what street photography means to him.
As the world celebrates the 25th anniversary of the fall of the Berlin Wall, one of the city's most famous artists Thierry Noir describes how things have changed.
A journey through Britain's most remote, and world-class, waves.
US indie documentary 'Sign Painters' pulls viewers into the story of America's artisanal hand-lettering past and present.
Sixty of the world's most prolific mosaic artists flooded the Santiago, Chile, suburb of Puente Alto with a sea of coloured tiles as part of the First International Mosaic Intervention.
A homemade video by The Gonz of him painting a new piece of art.