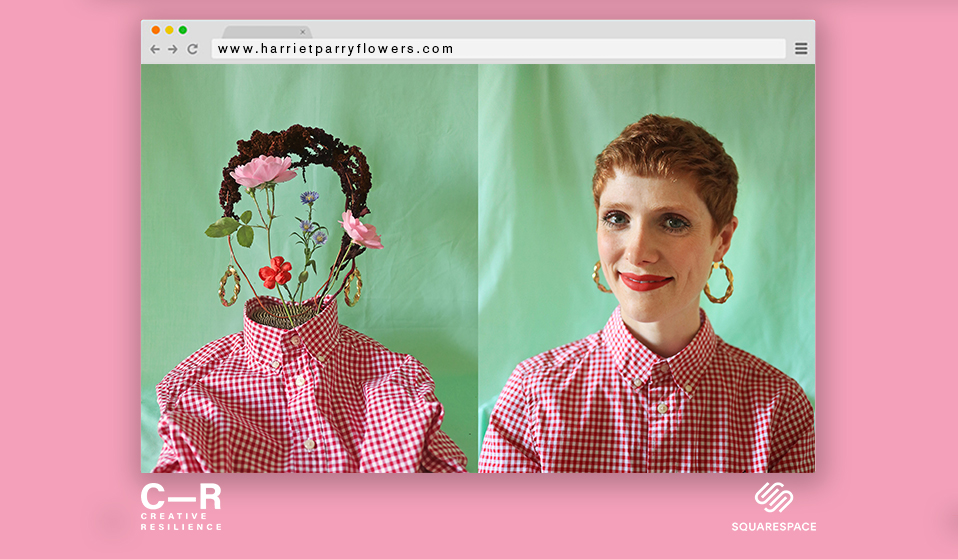 In the latest instalment of Creative Resilience, we profile Harriet Parry, an inventive force known for her floral interpretations of iconic artworks.

Surviving the perils of being a freelancer is tough – now more than ever. In partnership with Squarespace, we're supporting independent artists to create original work that responds to these testing times. In the latest instalment, we profile Harriet Parry, a creative force known for her floral interpretations of iconic artworks.

Floristry has changed a lot in the last few years. What was once the preserve of suburban gardens, memorials and Radio 4 programming has since flowered as a legitimate part of the modern creative universe, drawing from every imaginable discipline and aesthetic. At the heart of that transformation has been Harriet Parry.

“Floristry has become this huge, very complex world,” says the south Londoner. “You have a lot of fashion kids who have moved into the world of floristry… loads of very hip, very creative, and often very young people [are] starting to make things with flowers.”

“I still see myself as a florist, it’s a really lovely craft – a wholesome and friendly thing to be. But I think that because of the way I present and construct my work; the references I use, the way I tell stories… I am able to push things within the craft and the medium.”

Harriet graduated from Leeds Beckett University in 2007, where she concentrated on performance and video, as well as watercolour. During her time there, she found that there were always two sides of her personality that she was trying to reconcile in her art. “There’s this delicate, very English watercolour painting style… but at art school I’d also make these mad videos in which I’d inhabit these idealised, over-the-top characters.” 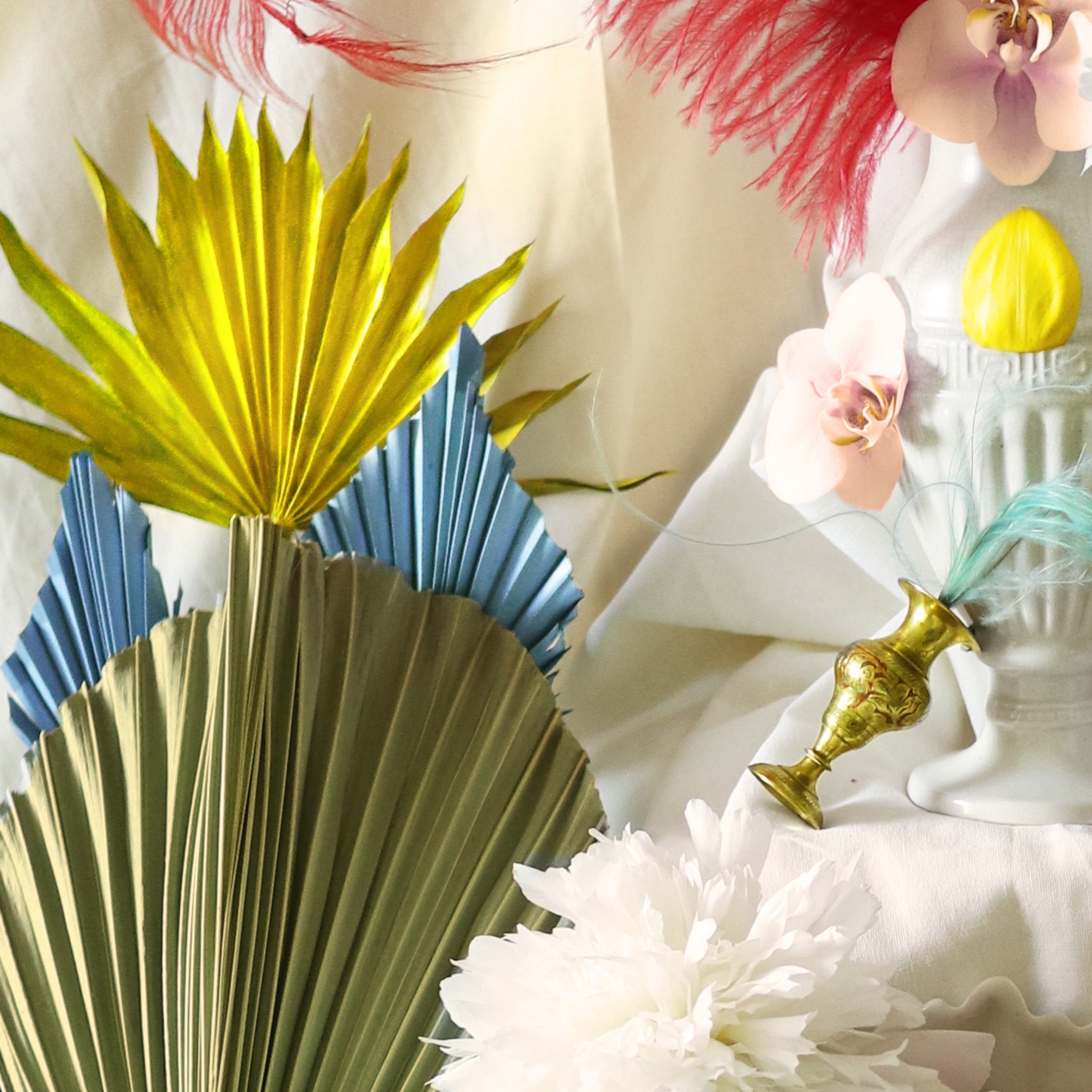 Harriet began working with flowers through a post-grad job in visual merchandising for a property developer. The role saw her creating arrangements for show homes.

Today, it is the interaction between the two that helps create the unique energy in her work: the world she inhabits is a colourful, far-reaching one which reflects her character perfectly. The broad sweep of things that Harriet does – from location work in film and fashion, to commissioned studio-based projects and personal work – is all tied together with a playful lightness of touch. “It really is this very fluid art practice. When I first set out using flowers, I don’t think the industry was as geared towards seeing them as another form of art.”

The 34-year-old’s love of working with flowers began after university, when she started working as a visual merchandiser – first for a property developer, and then for a fashion brand. While the work was challenging, it lent itself to the creative approach she’d honed during her time at Leeds: she was often tasked with doing fake flower arrangements for show homes, during which she’d have to adopt the personas of “stereotypical characters” from specific demographics. It’s an approach she compares to method acting today. “I’d have to become these people and make an interpretation and create something that would resonate with them,” she remembers.

In 2009, though, Harriet upped and moved to London, where she began getting commissions as a freelance illustrator. At the same time, she started working as a traditional florist at a local studio in order to help pay the bills. Her art and design background, paired with the previous experience she had working with flowers, meant that she got to grips with things quickly – there was a lot of learning on the job, which suited her. 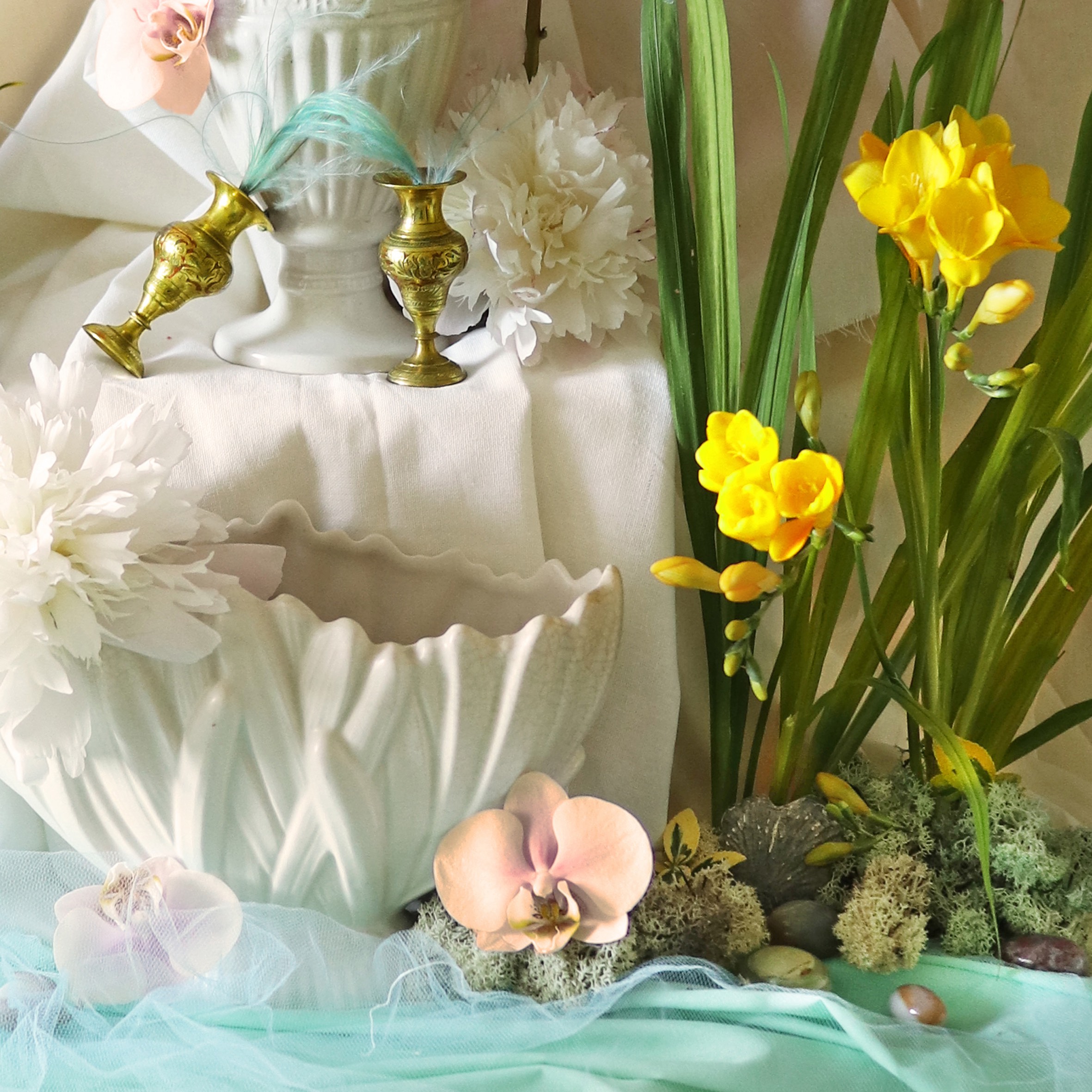 Harriet’s process is all about layering and texturing. Her ongoing series, ‘Flower Interpretations’, is based around the idea of reworking iconic artworks as floral arrangements.

It soon became clear that, with floristry, she was onto something. So in 2012, she decided to go full-time and made the jump to self-employment. From the beginning, her individuality was clear to see: Harriet uses flowers across various artistic disciplines, blending art, fashion and film with her designs. This multi-textured approach has since seen her work appear at workshops, exhibitions and weddings, as well as in films and magazine editorials.

But it was her Flower Interpretations series that really began turning heads. The ongoing project – in which Harriet reimagines history’s iconic artworks, scenes and images as floral arrangements – started organically, evolving out of her tendency to see the flowers in everything. “Every time I go to an exhibition, I buy a postcard,” she says. “These postcards are put up on my kitchen cupboards, so every day I think about the shapes, textures, patterns [in them] and see the elements as flowers. It just seemed natural to start this series.”

The first instalment saw Harriet reworking one of Charles Rennie Mackintosh’s famous bouquet motifs, followed by her take on Pablo Picasso’s Woman with Hat (Olga). Since then, she has gone on to reinterpret works in a variety of different spheres. One of her favourite pieces was a floral take on a portrait of the singer-songwriter Douglas Dare, by the artist Furmaan Ahmed. Harriet’s version went on to be included as an exclusive artwork in Dare’s Milk Teeth album – it also became a limited cover for his EP and appeared in the video for his single ‘Silly Games’. 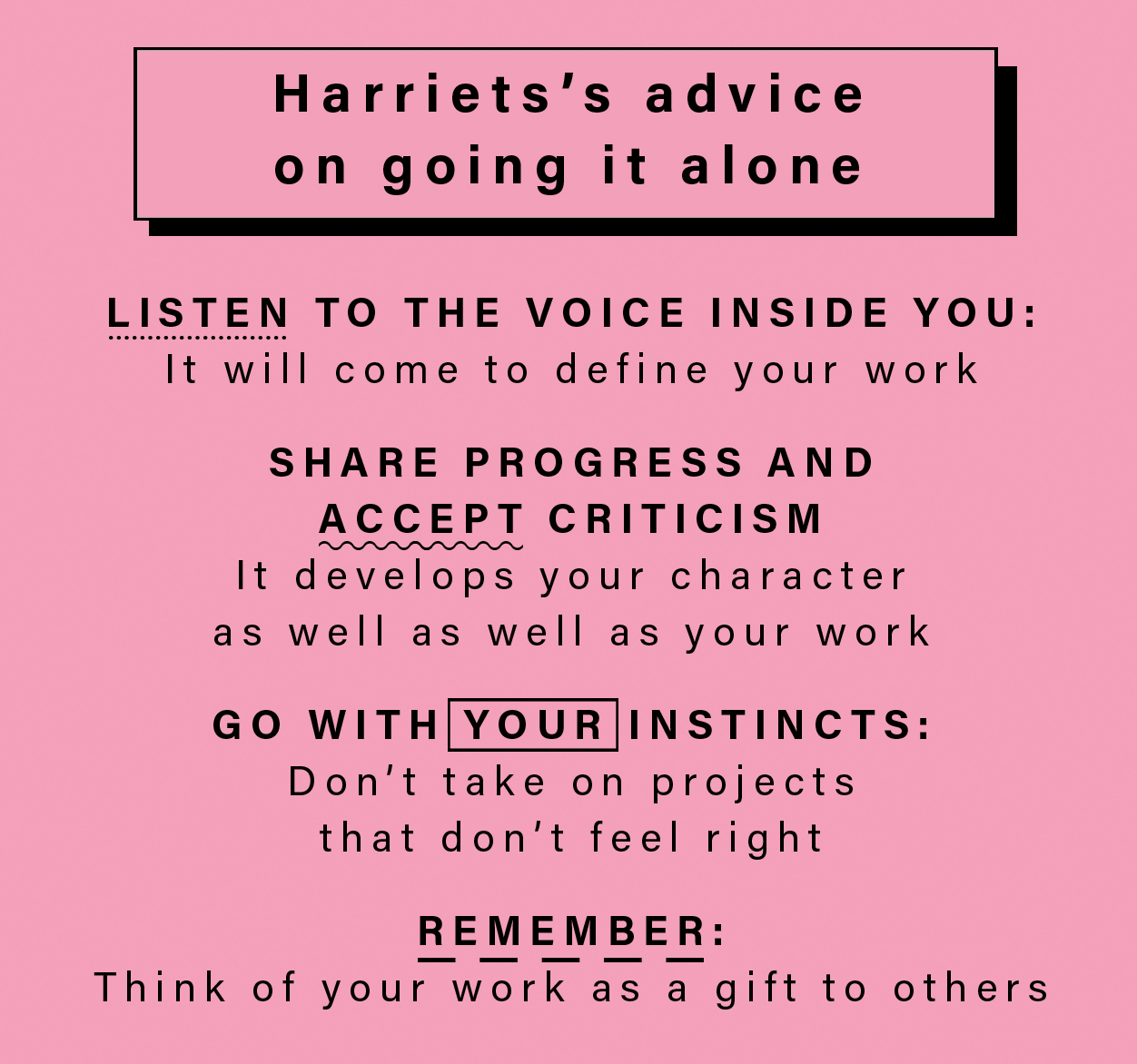 Another highlight saw her working in collaboration with the artist Kapwani Kiwanga on her ongoing piece Flowers for Africa, which appeared as part of A Time for New Dreams, an exhibition curated by Grace Wales Bonner at The Serpentine Sackler Gallery. “I was asked to recreate arrangements from a series of historical images shared with me by Kiwanga. Each image is related to a historical event or ceremony, related to the independence of an African country. The flower arrangements reactivated a certain moment in time but were left to wilt over the course of the exhibition. This was a comment on the fading memory of the historical moments and the fragility of sovereignty.”

As an artist, the main challenge for Harriet was always how to exhibit this kind of work digitally. She needed a platform where she could bring the different strands of her creativity together in one place, allowing people to understand the scope of what she does, as well as a space that exhibits the ever-changing nature of her commissions. “The Squarespace platform was really vital in enabling me to get my story out there,” she says. “Creating is what grounds me, gives me purpose and, by sharing what I love online, it has enabled me to stay connected with others, to bring about new collaborations. It has hopefully enabled me to brighten peoples’ days and bring joy to these odd moments.”

The odd moments have, of course, increased recently. Lockdown in particular has drastically impacted the availability of materials available to Harriet, pushing her to adapt and evolve the way she makes her art. “I’ve been forced to revert to making do with stuff that I can forage and find… I have a stock of dried flowers. But I am forced even more to look for the little nuggets of beauty around me – that’s been the main process for me lately, and it’s been an interesting, fun challenge.” 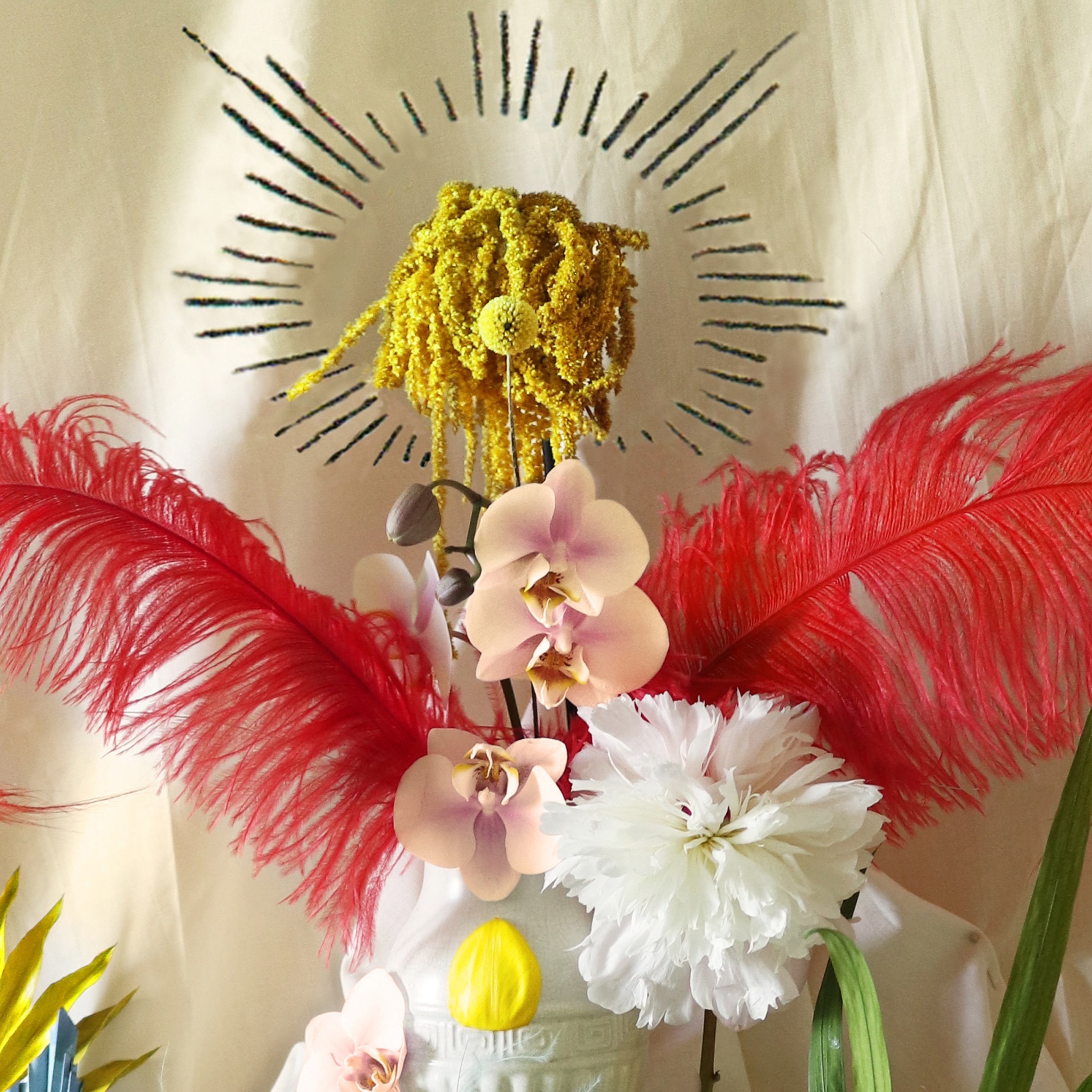 Throughout lockdown, Harriet has been working with foraged flowers and dried materials. “I am forced even more to look for the little nuggets of beauty around me,” she says.

In fact, given the paucity of materials around her, she’s found herself reacquainted with aspects of her working process that she’d begun to neglect. “I realise that I had forgotten about the scent of peonies,” she explains. ‘How they fade with time from pink to white, how they open up in the daylight like ballerinas and then close down and sleep during the night – how their petals fall and scatter when they come to the end.”

For this commission, Harriet created a flower interpretation of the ‘Temperance’ tarot from the Rider-Waite deck by Pamela Coleman-Smith. For her, it’s an image that represents the feelings and ideas that have come to the surface during lockdown: ones about her life, work and creativity. These might change over time as her work and life progress. But in a way, given her approach to creativity, that feels fitting.

“This [work] symbolises for me a sense of balance, patience and the idea of leaning into a new situation, accepting and adapting with it with love, kindness and resistance,” she says. “It is about connectivity, re-evaluation of what is important to us collectively and individually.”

“It also speaks to me about connecting with yourself and nature, of remembering that life is fluid and ever-changing and trusting in yourself. It has reminded me to take some time to reflect and step back. It has encouraged me to keep creating during this strange uncertain time.” 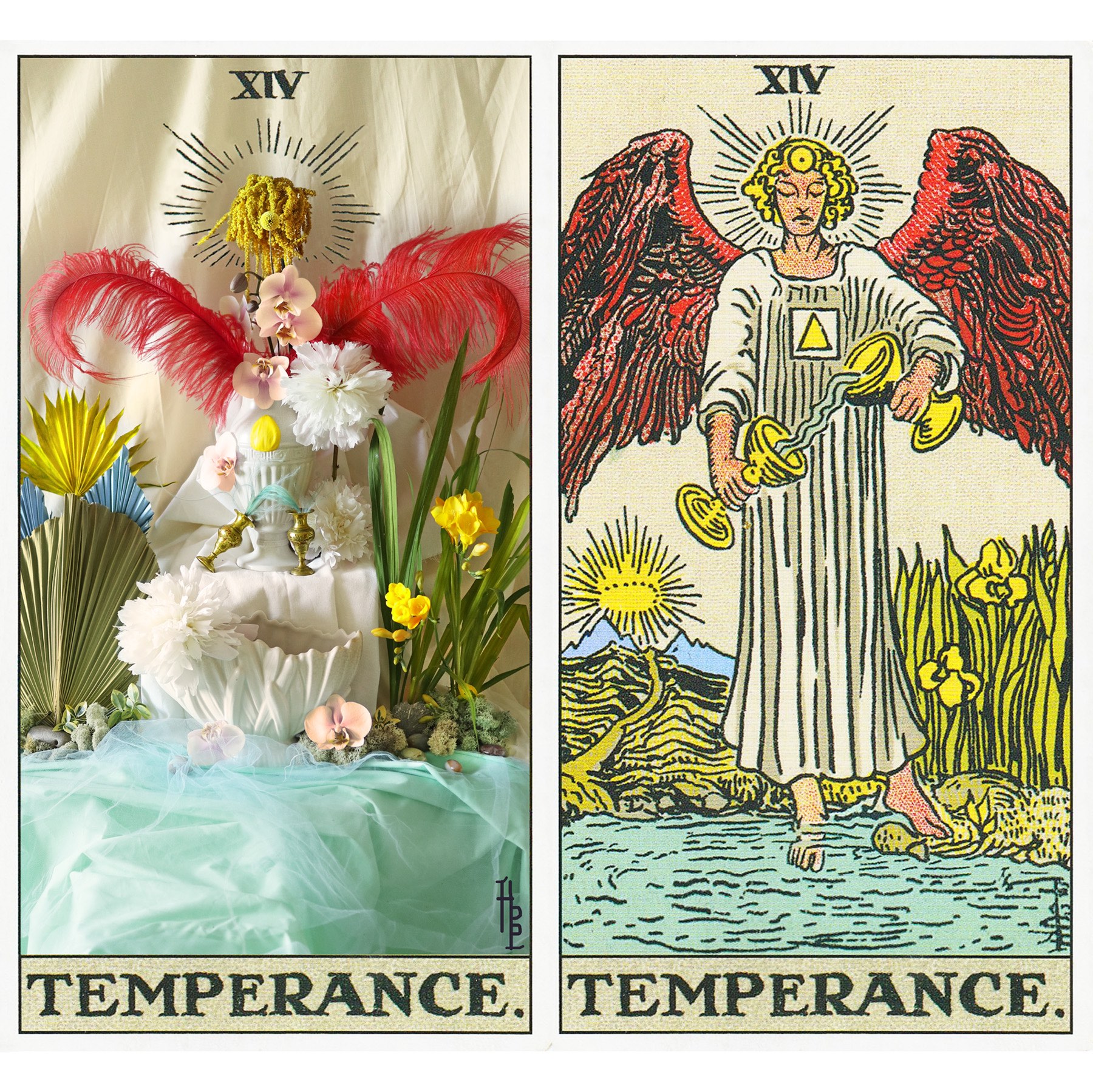 Are you ready to share your vision with the world? Start building today: use the code HUCKMAG for a discount on a new Squarespace website.

Linkedin
RELATED ARTICLES
OTHER ARTICLES
In 1984, Martin Shakeshaft set out to document the miner’s strike as it really happened, using his photography as a tool for activism.
In Sheffield, food delivery drivers are fighting back against one of the giants of the gig economy.
Those set to be impacted by the governments ’undemocratic’ bill explain why it risks silencing them.
The novelist discusses his electrifying debut, which offers a deft examination of masculinity under late capitalism.
From the queues outside to the last ones standing, Francesco Mellina’s new photo book follows a night that has gone down in the Northern-Soul history books.
Ahead of the policing bill reaching its final stages in the Lords, protestors came together to rally against the legislation.