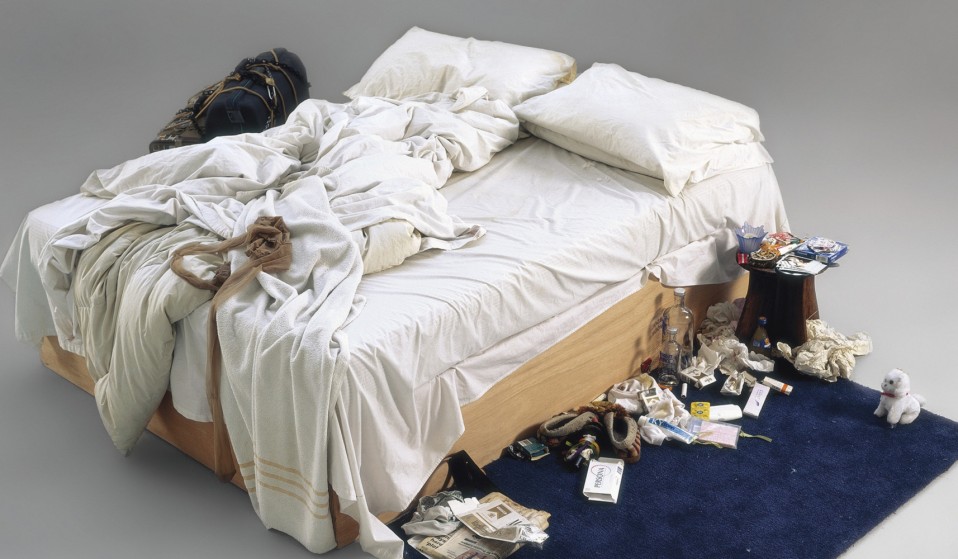 British artist Tracey Emin is showing her messy bed, which was bought for £2.5million last year, at the Tate Britain for the first time in 15 years. I called my dad to see what he thinks about it all.

British artist Tracey Emin is showing her messy bed, which was bought for £2.5million last year, at the Tate Britain for the first time in 15 years. I called my dad to see what he thinks about it all.

One of Tracey Emin’s most famous and most controversial pieces of work ‘My Bed, for which she was nominated the Turner Prize in 1999, has gone on display, for the first time in 15 years, as part of the permanent collection at the Tate Britain.

Emin describes the messy bed – littered with bottles of alcohol, empty cigarette packets, used condoms and dirty underwear – as a portrait of a young woman. It is Emin’s real bed from 1998 when she was living on a council estate in Waterloo and going through a particularly difficult breakup.

The work – which now stands in the Tate Britain next to two pieces by Francis Bacon – has divided opinion from the get-go. Some see it as a raw piece of work that communicates a ‘sense of inner turmoil’ and others see it as ‘pretentious rubbish’ that takes advantage of the market.

I remembered my dad really hating it first time around so I thought I’d drop him a line – at home in Swansea, Wales, where he works for a charity – and get his take on its resurrection.

Me: ‪Great! So am I right in thinking you dislike Tracey Emin’s ‘My Bed’ quite a lot?‬

Pops: ‪I dislike it and I dislike what it represents.‬

Me: ‪Do you remember the first time you saw it?‬

Pops: ‪No. I have never seen it in real life, just in the media‬.

Me: What was your initial reaction when you first saw it – maybe that was in 1999?‬

Pops: ‪I thought what a load of pretentious rubbish. It has no aesthetic quality and no artistic value‬.

Me: ‪Haha, don’t hold back. Tracey Emin says it’s a self-portrait; that it represents going through heartbreak. You didn’t get anything like that from it?‬

Pops: To be fair, perhaps I cant really judge that without seeing it live, but I doubt my reaction would be any different. If it had any value to me it would be obvious with the artist having to tell me what to feel about it‬.

Me: Do you feel the same about other contemporary art? I know you’re not a Damien Hirst fan…‬

Pops: Yes, there’s an awful lot of contemporary art I feel the same way about. No I am not a great fan of Hirst either, but at least a lot of his stuff is visually striking‬.

Me: I find it interesting because you’re a fan of quite experimental literature – Kerouac etc. – and you were part of that liberated sixties mentality. But you feel that art should still have a strong aesthetic quality?‬ It can’t just make you think?

Pops: ‪Kerouac, etc., had strong aesthetic qualities. They may have been different or experimental but they had artistry. ‘My Bed’ has no artistry, anyone could make it, it’s just a concept, but a worthless concept for me‬.

Me: I see what you mean.‬ Do you know it’s been reintroduced into the Tate Britain’s permanent collection?

Pops: Yes I read that, which sort of raises another issue. This kind of art becomes valuable because it’s valuable. Certain artists like Emin are collectable because they make a profit for people. Their monetary value makes artistic value irrelevant. That’s what I mean when I started by saying I dislike what it represents, i.e. money‬. 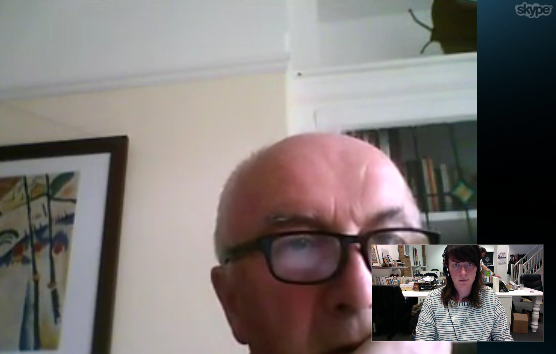 Me: ‪But is that her fault or the art dealers?‬ Do you think the monetary value of her work invalidates the message?

Pops: ‪Not in itself. However much someone paid for a Vincent van Gogh would not change its artistic value, but there is a collaboration between a lot of contemporary artists and dealers to produce something that will make money‬.

Me: ‪The British public seem very interested in her work. She had a retrospective at the Hayward last summer and it was really well attended.‬

Pops: So was the Spice Girls’ farewell concert‬.

Pops: ‪I think people buy into the mystique, because something is worth millions, because it’s famous, so they feel they must see it‬.

Me: I see. What about the curator at the Tate Britain?‬ She said this: “It’s a new moment for ‘My Bed’ and a moment to reassess it. It is not just about the media hype, it is about looking at the formal qualities of the work and thinking about the work in more historical terms alongside other major figures.” They have put it next to two pieces by Francis Bacon!

Pops: What can I say, she is deluded as to the worth of ‘My Bed’. What is there to reassess? Except reassessing its financial value. I am not great fan of Bacon but I can see the appeal and value and artistry of his work, likewise Mozart. But ‘My Bed’ has no value or artistry (other than financial, which is a self-fulfilling bubble).‬

Me: Okay, say a young woman goes to see ‘My Bed’ and it makes her think differently about her life, and the role of women in society, has the work served a purpose? Even lacking artistry as it does?‬ Like, could a viewer make it a better art piece than Tracey Emin did?

Pops: ‪Art is anything you want it be, but is it any good? Of course that’s subjective, if you love the Spice Girls then that’s good art for you. But there is a kind of ‘The Emperor Has No Clothes’ conspiracy between artists like Emin and the art establishment. For example, probably her next most famous piece is all the people she has slept with; their names stitched to a tent. That’s the same thing; all concept, no artistry, no intrinsic aesthetic value, worth millions. She knows when she’s onto a good thing, and so do the galleries and dealers.

Me: ‪I see what you’re saying. I guess, going back to one of your earlier points, if her work isn’t understood by people, it has kind of failed. Is there any part of you that might be intrigued to go and see ‘My Bed’ in real life?

Pops: ‪I don’t think so. I think it would just make me angry. Also I don’t need to, because I can’t see how it would be different to what I can see in the media, whereas I can see why seeing a Pollock or hearing Hendrix live, adds to the experience‬.

Me: ‪Amen Pops! Thanks for the interview x

Linkedin
RELATED ARTICLES
OTHER ARTICLES
Conceptual American artist lends his subversive images to social project The Skateroom, which raises money for charity through high-profile deck collaborations.
As the world celebrates the 25th anniversary of the fall of the Berlin Wall, one of the city's most famous artists Thierry Noir describes how things have changed.