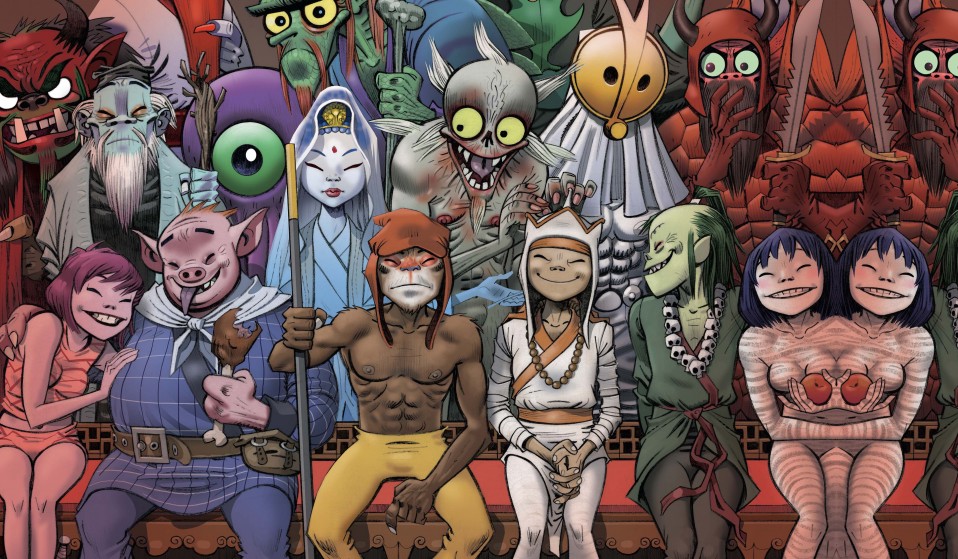 25 years of Jamie Hewlett's work are catalogued for the first time in a new book by Taschen, looking at the artists' iconic style and legacy.

25 years of Jamie Hewlett's work are catalogued for the first time in a new book by Taschen, looking at the artists' iconic style and legacy.

It doesn’t matter where you come from or how you first saw it – anyone can recognise Jamie Hewlett’s work from a distance. Juxtaposing hyper-detailed scenes with hollow-eyed, intricately dressed characters, the artist’s brain contains a multitude of universes that defy classification, teetering the line between comic books, fine art and performance.

Although Hewlett’s legacy has been widespread, be it via Gorillaz records, Saatchi exhibitions or Tank Girl comics, it has never been comprehensively catalogued – until now. Jamie Hewlett, published by Taschen, contains 25 years of the artists’ work, containing everything from finalised pieces, to drafts and projects that never saw the light of day.

The book opens with a candid conversation between Hewlett, the renowned French photographer Jean-Baptiste Mondino and the actress Emma de Caunes, who also happens to be Hewlett’s wife. They discuss longevity, big and small dicks, punk rockers, DC comics, and MAD Magazine.

The casual approach to the conversation is fitting with the rest of the book – it’s haphazard, not overly precious or hyper-complex, but filled with happiness and detail. Halfway through, talking about his characters, Hewlett says: “I like misfits. I like ugly people who are interesting. Ugly-looking people who dress well are more interesting to me.”

And it shows. The women he creates steer away from the hyper-femininity and traditional – instead, they exist in their own right. They are not solely decorative. Tank Girl, for example, was born in the creative unconscious of Jamie and Alan Martin during the Thatcher years, and came into the art world like a punch in the face. Gleefully bruised and battered, she drank, fucked, and ran through the Australian desert with her kangaroo boyfriend, Booga. The pages transported the reader into the mind of tank girl, who became an icon for misfit women all over the world.

The book goes on to explore his other successful projects from the past 25 years. There’s Gorillaz, the only entirely manufactured band during the age of fake-reality popstars; heartfelt documentations like the Bangladesh series; and his latest projects, like giant tarot cards The Suggestionists, shown at the Saatchi in late 2015.

Ultimately what is incredible about Hewlett’s work is that it continuously defies definition and continues to expand itself without losing character. It’s clearly identifiable even when it changes medium. It borrows from all aesthetics and DIY cultures and creates something brand new – a dirty, gritty world of wires, cock shuttle ships, giant eyes and red-eyed beasts that a lot of us would love to live in.

Jamie Hewlett is out now, both living his life and in book form, via Taschen.

Linkedin
RELATED ARTICLES
OTHER ARTICLES
After fleeing the war in Ukraine, people are finding it impossible to secure affordable and decent housing in the UK.
After building his reputation covering the US civil rights movement in the 1960s, the photographer went on to produce some of the most enduring images of the past century.
A new law change is enabling Britain’s donor-conceived children to know the truth about their origins – but campaigners say the fertility industry must do more to protect people.
The pro skateboarder withdrew from the 2020 Olympic Games so he could come out as trans. Now, he’s hoping to encourage others to live as their authentic selves – within the sport and beyond.
Campaigners reflect on what the supreme court’s decision to allow buffer zones in NI means for the future of reproductive rights in the UK.
A new film from Berghaus traces the story of Adam Raja, who left behind a turbulent upbringing to discover the healing power of climbing.