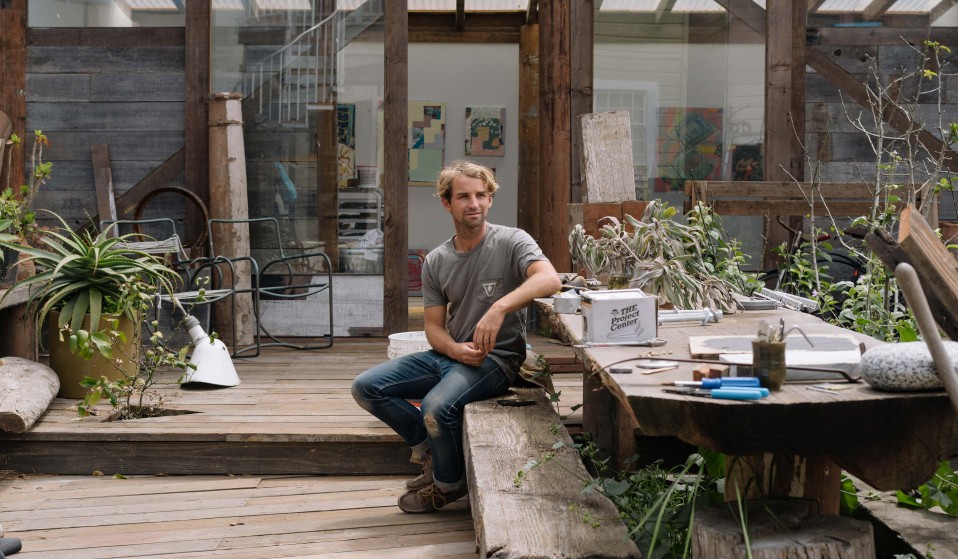 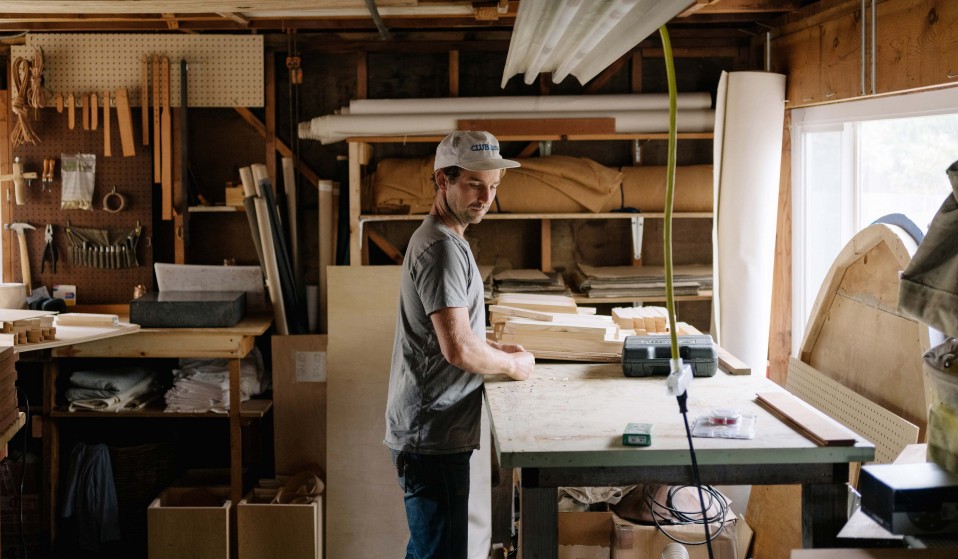 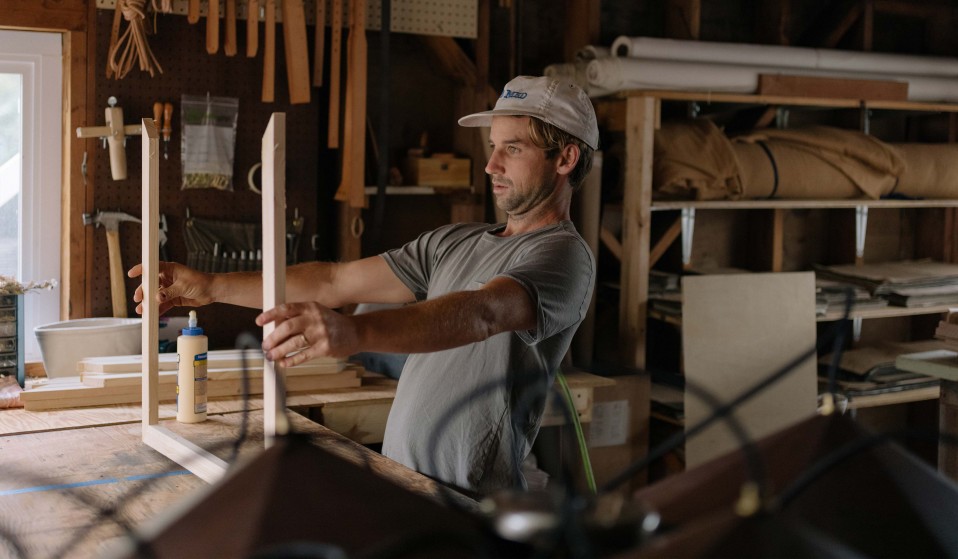 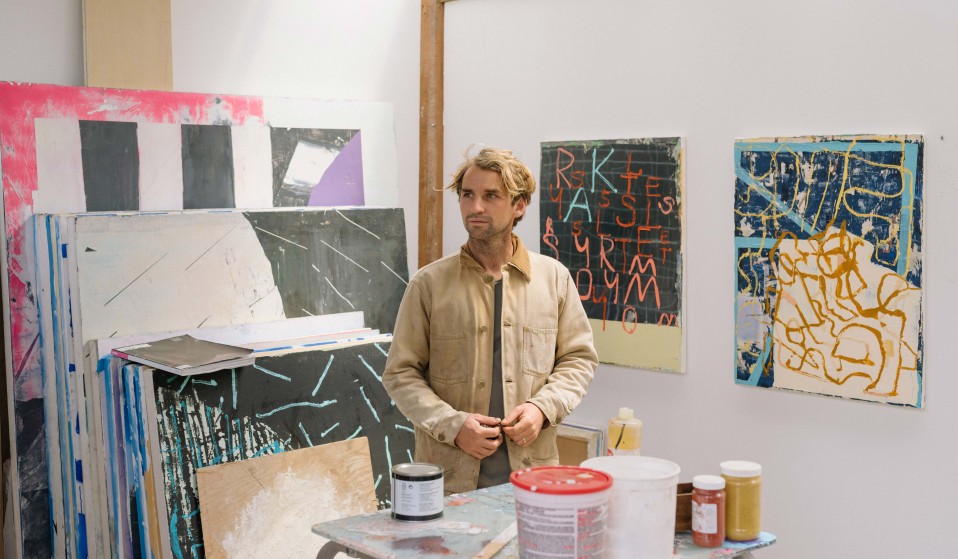 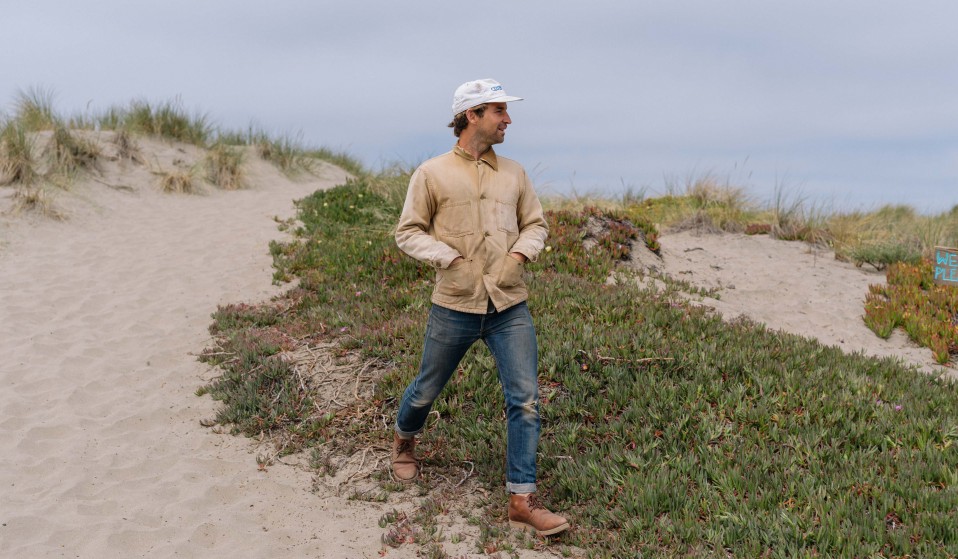 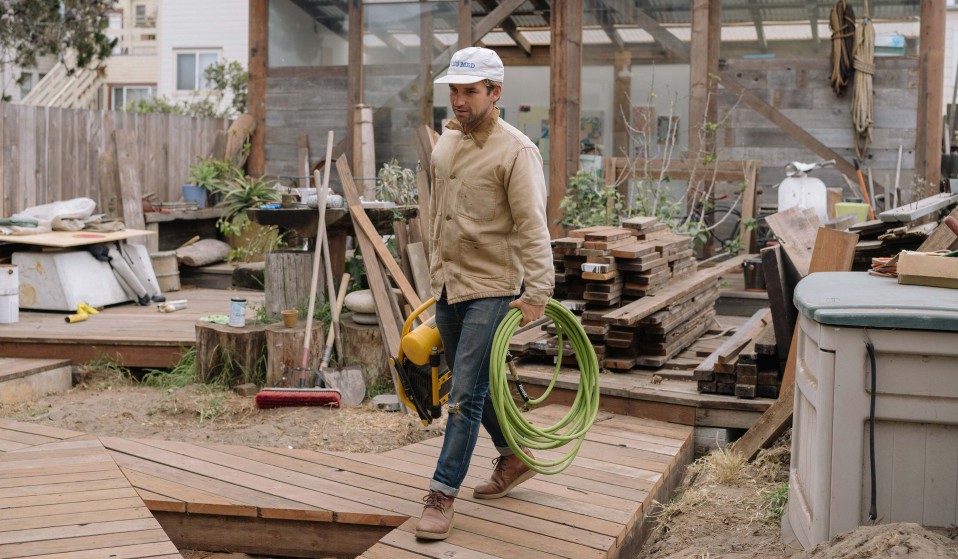 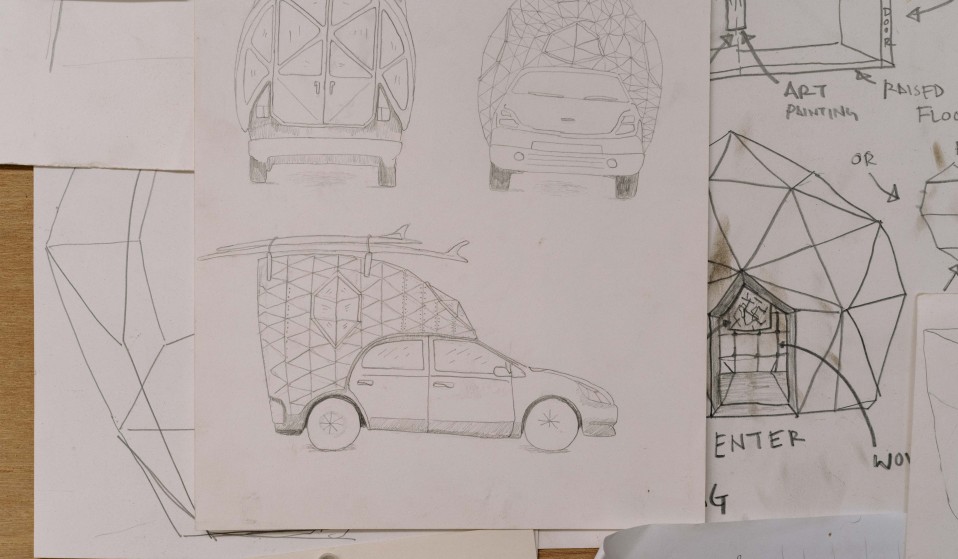 He makes wild contraptions out of wood that are the stuff of surfing lore. But for artist Jay Nelson, adventures only really kick off when things begin to go wrong.

He makes wild contraptions out of wood that are the stuff of surfing lore. But for artist Jay Nelson, adventures only really kick off when things begin to go wrong.

“Adventure is such a broad term,” muses surfer and artist Jay Nelson. “It could be going to Disneyland or it could be hiking Mount Everest. To me, it’s lost its meaning. It doesn’t really have any real significance to me anymore.”

While many people look to photographs, or scars, to mark the passage of time in their lives, Jay has the objects he’s built. The treehouses, scooters, boats. The evolving studio growing out from the rear of his house. And most of all the beloved campers that have taken him on meaningful journeys around the world. Together, these handmade ‘things’ have all helped bridge important chapters in his life. 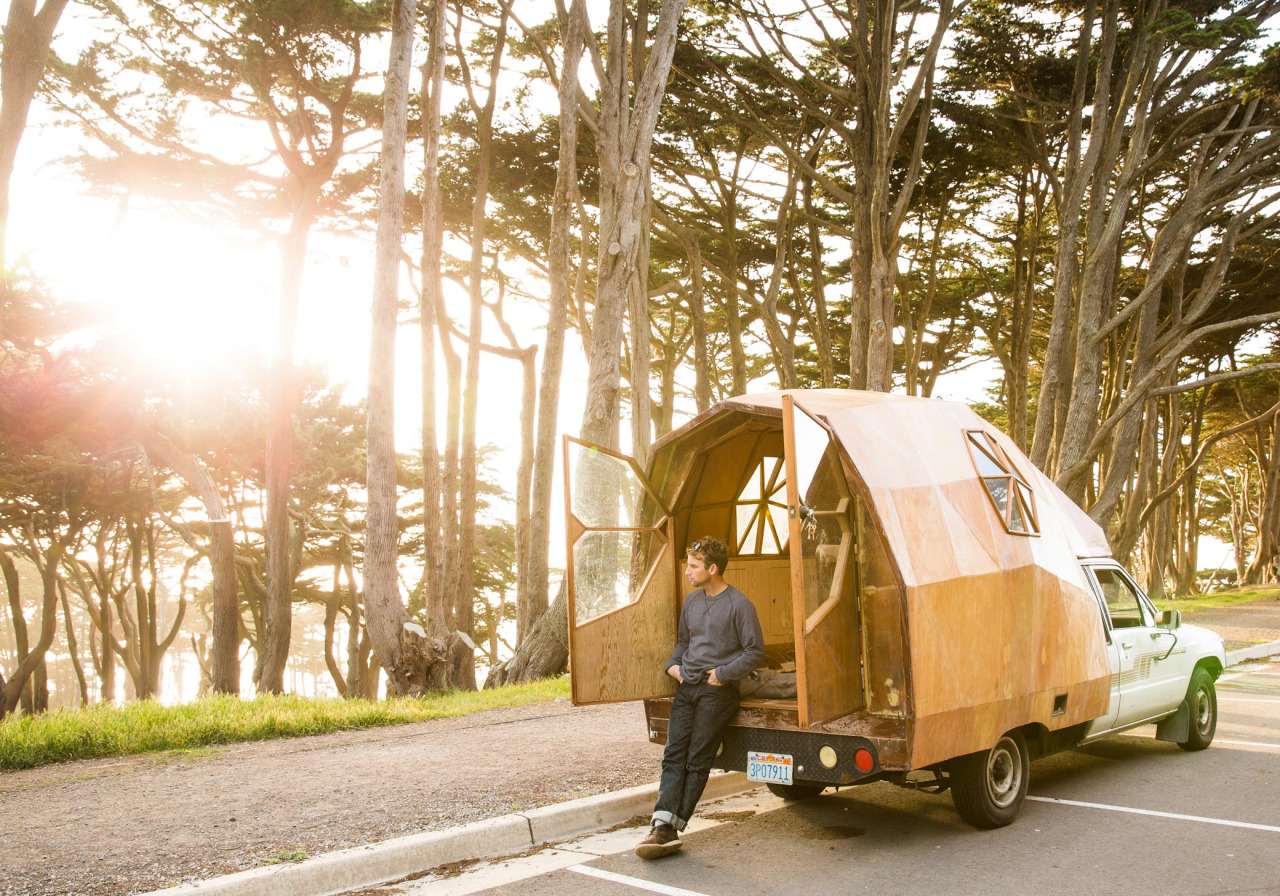 Jay’s first-ever build as a teenager was a make-it-up-as-you-go-along treehouse. But over the years he’s refined his craft, designing and building the interior of San Francisco’s iconic Mollusk Surf Store and creating incredible wood-panelled wanderlust machines, like the customised Toyota pick-up truck – complete with wooden sleeping pod – that he gifted to friend Rob Machado for his pro surfing adventures.

Originally from Los Angeles, Jay now lives in a quirky Victorian duplex in San Francisco’s wild and windswept Ocean Beach. As the tram out from the centre of town peaks the top of the hill, Judah Street stretches out below. Beyond the tangled telegraph wires, the pale, faded buildings come to an abrupt halt and through a break in the sand dunes you can see the surfable waves of the Pacific Ocean crashing against the shore.

Jay moved to the cold and foggy western-most corner of SF a decade ago after reading it’s the only place in the world where rent gets cheaper the closer you are to the beach. He joined a new generation of artists and progressive surfers centred around John McCambridge’s Mollusk surf shop-come-community hub. Living in the attic room, he helped shaped its early growth alongside the likes of surfer-artists Thomas Campbell, Tyler Manson and Kyle Field. “My idea at the time was paying no rent,” he explains. “If I can make my living expenses as small as possible then that equals more freedom. To be able to surf whenever I want to surf or be able to work on art when I want to be able to work on art.” 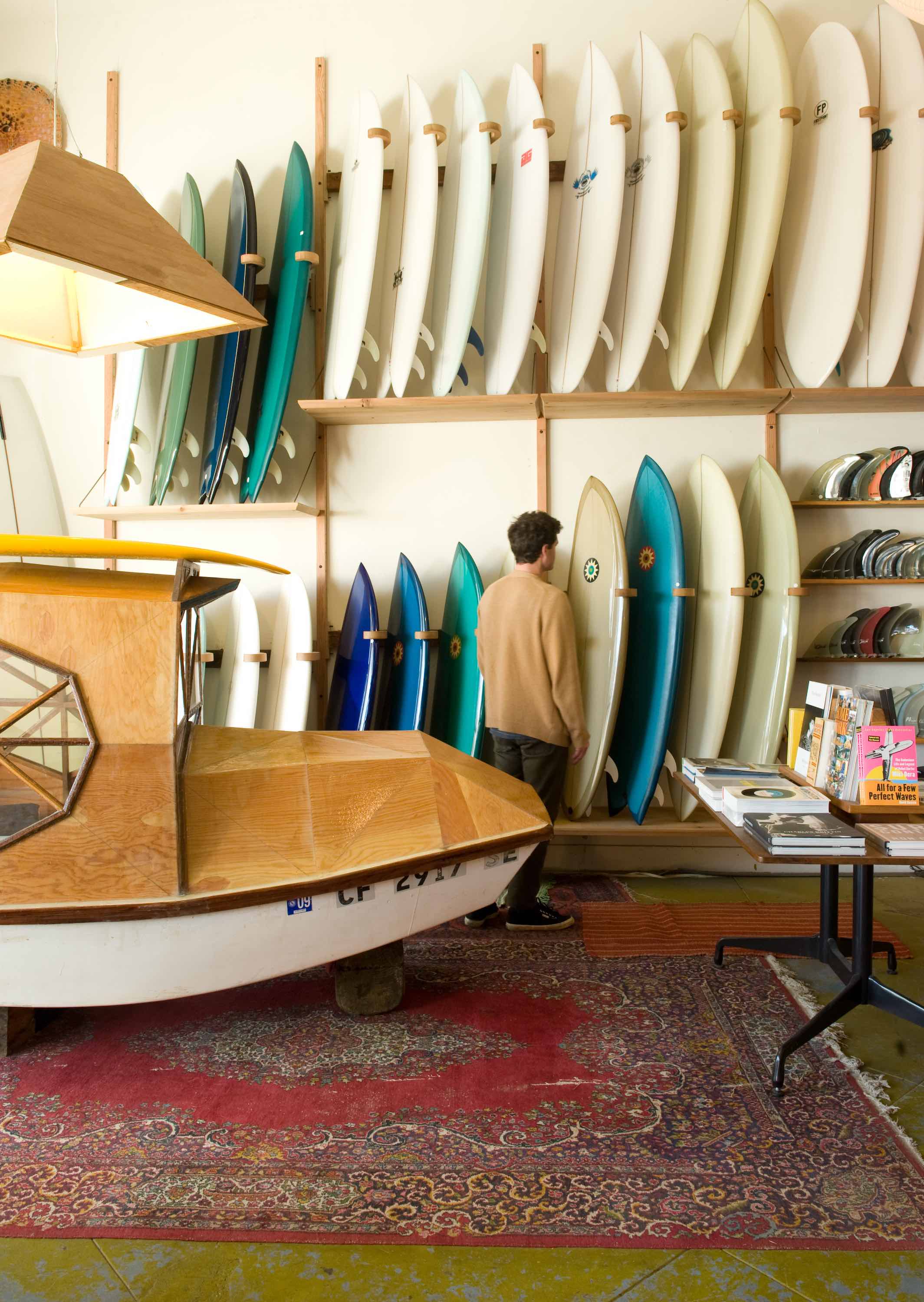 While working at Mollusk he built the first in a long line of modified vehicles, a ’91 Honda Civic. He put it together and drove across the country to New York, where he picked up his estranged girlfriend (now wife and daughter of his two-year-old daughter Romy) before heading north to Nova Scotia, Canada. “I built that camper because I felt like the extension to living at Mollusk in the attic was having a vehicle to go places in. [At the time] I was really inspired by this book, The Temporary Autonomous Zone by [anarchist writer and poet] Hakim Bey. The idea is to set up these situations in your life of temporary autonomy and that camper was kind of like a temporary autonomous structure to go out into the world. It was the most exciting for me, because it was the first one I ever made – and it worked the best.” 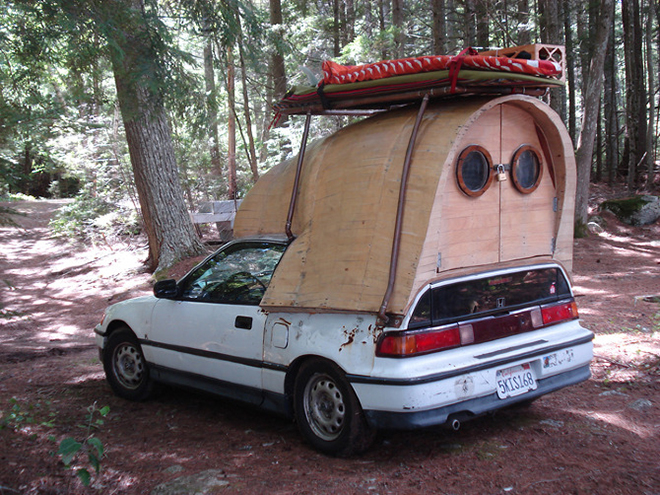 After walking out Jay’s backdoor – through the work-in-progress wooden living space, into his backyard, and past the self-built studio he shares with Rachel, who’s also a painter – we wander the two blocks to Mollusk, with Johnny his energetic terrier in tow. On the corner outside the store, Jay spots a battered, boxy little mail truck as it rolls past. “You could build something so radical with that right there!” he remarks. 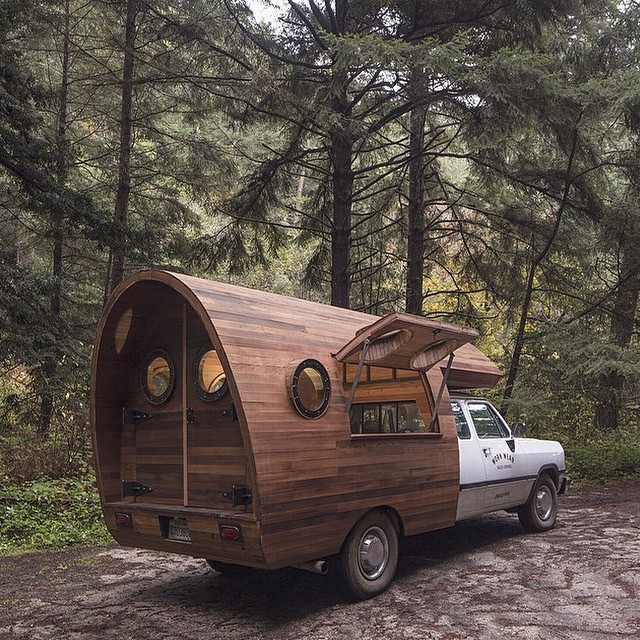 Inside the store, the geometric but playfully organic shapes of Jay’s striking creations immediately jump out: there’s a giant pod above the changing rooms; his miniature camper boat complete with surfboard strapped to the roof; and above the entrance, the treehouse he built on a friend’s land in Hawaii and then recreated here from wood he found around Ocean Beach.

“There’s a similarity with building campers and treehouses where you kind of have to work with what’s available,” Jay explains. “When you can do anything it’s almost like you can’t do anything. But give me that Mustang and I can work with what I have to make a camper on it. With a treehouse you work with what the tree has to offer. So there’s this creativity that comes out of that. To me, that’s where the art is.” 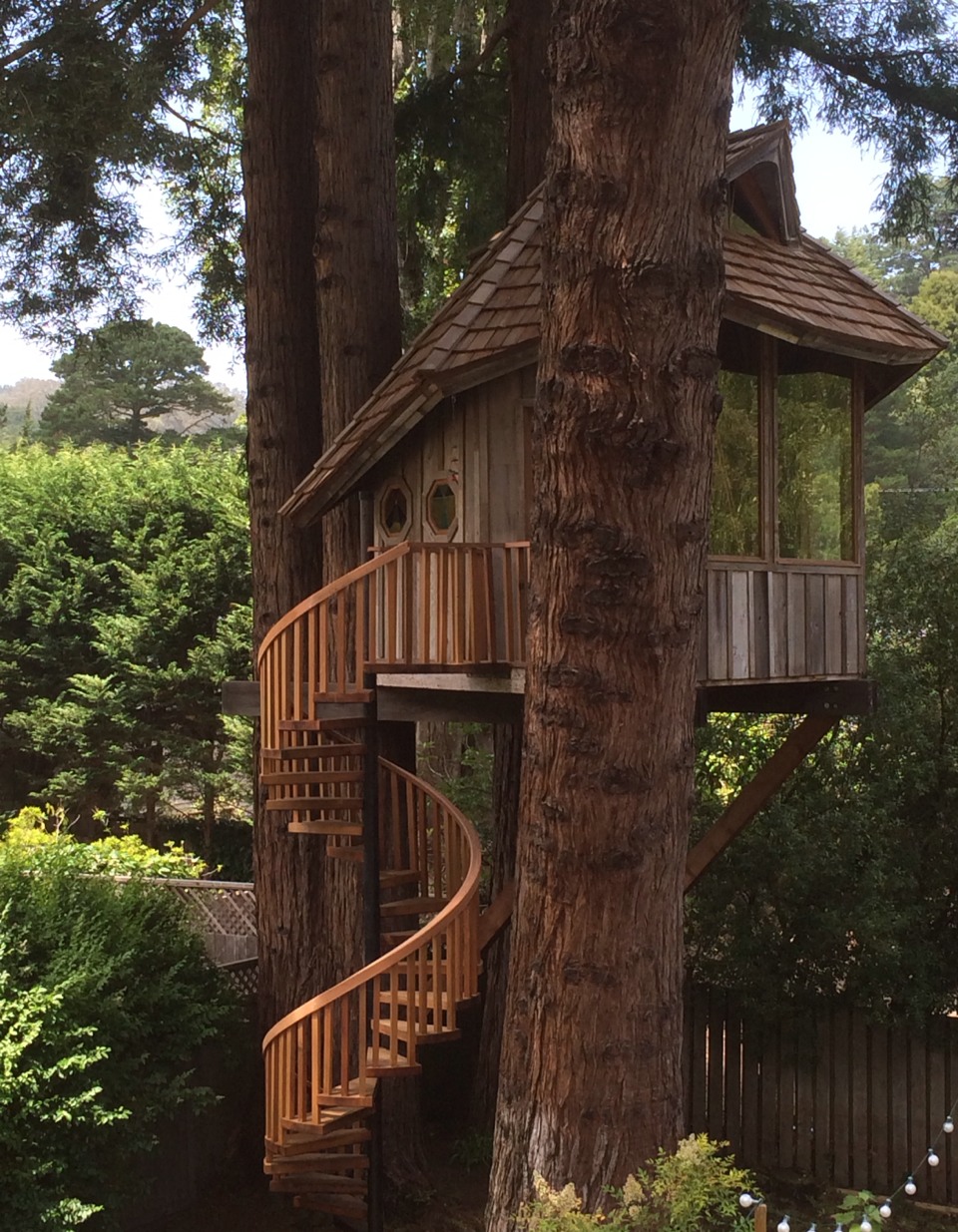 Leaving Mollusk, we follow Johnny on a walk and talk. Along the way, Jay checks out some kids’ bikes left on the kerb then spots a pile of discarded perspex windows in a neighbour’s driveway. “They’d be great for a camper,” he says, seeing new inventions everywhere. 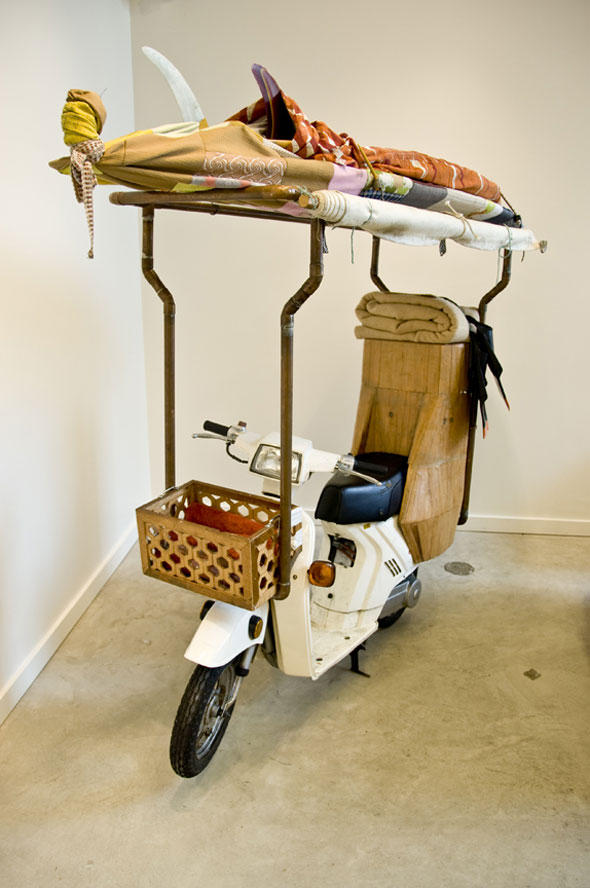 “[The way I built my first treehouse] is the same way I approach all the things I make now,” he explains. “You start with one two-by-four, you nail it to a tree and then you use that to climb to the next two-by-four, you nail it in and then you keep going. You just let it unfold naturally and become inspired by what the tree has to offer. You have to start something and you get to a point where you’ve no idea where you’re going. With that always comes this deep feeling of despair. You’re really scared and you feel like it’s going to be a failure, this is going to be embarrassing. Then you have to work through that. When you come out the other end you see the project in a whole new light, it’s totally unexpected. I remember Yvon Chouinard [Patagonia founder] saying that an adventure doesn’t begin until everything goes wrong.” 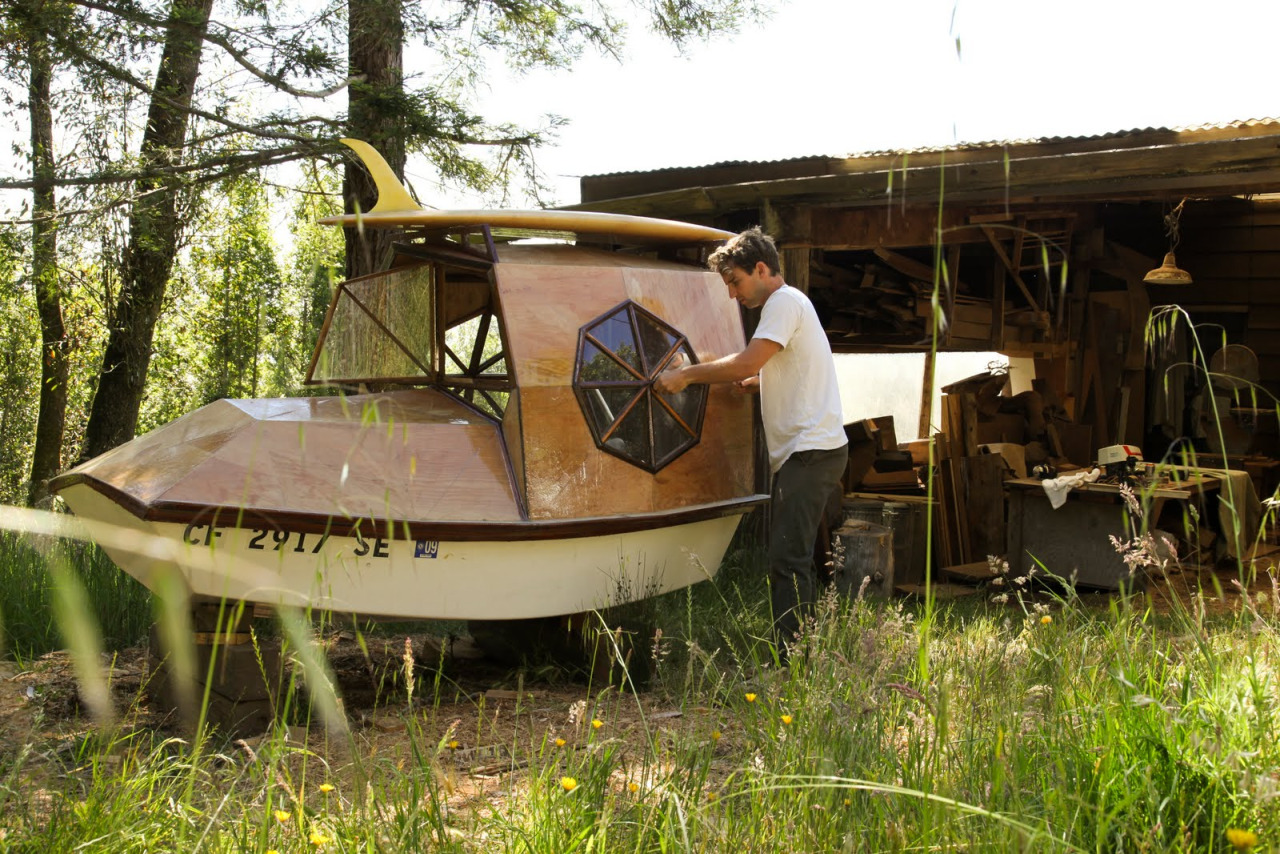 He turns to me and pauses. His face brightens. “There you go, that’s the adventure for me – it’s building them. The actual travelling in them is also awesome and great, but that’s the most exciting part for me. The mind adventure of figuring out how to do something. I’m not interested in just going out and buying something, I like learning and the excitement of coming out of complete despair.”

Linkedin
RELATED ARTICLES
OTHER ARTICLES
Jermain Cikic reflects on his experience of visiting the island of Samos, Greece, in the summer of 2021.
A new book traces the legislation’s tumultuous history and the lasting impact its had on LGBTQ+ activism today.
With abuse of call-centre staff on the rise, many are now speaking out about the hostility they’ve faced.
The musician, DJ and founder of Monika Enterprise reflects on a career defined by revolution and rule-breaking.
From the queues outside to the last ones standing, Francesco Mellina’s new photo book follows a night that has gone down in the Northern-Soul history books.
Photographer Alice Mann reflects on capturing the camaraderie and discipline it takes to succeed in a highly-competitive sport.