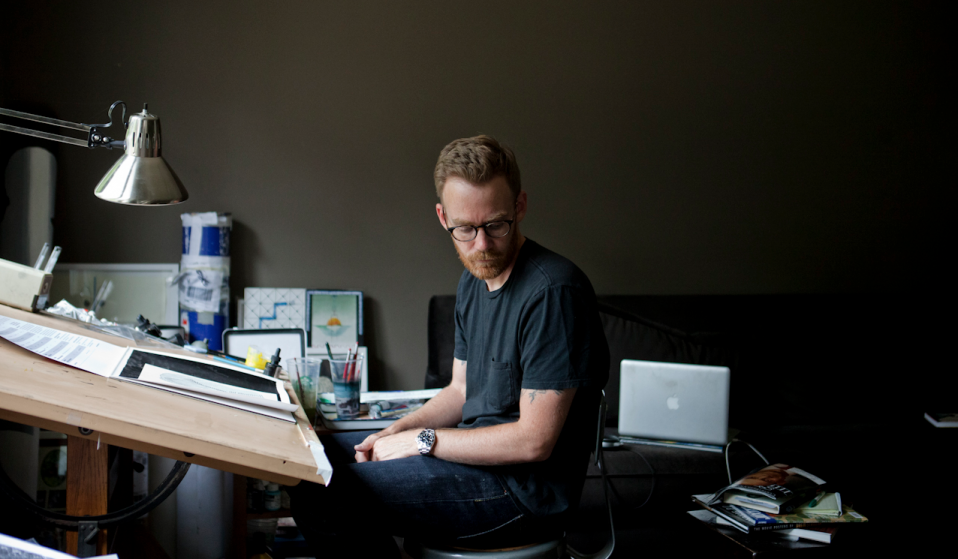 “I just ate hot shit. I bombed so hard. And then I kept bombing for three years.”

“I just ate hot shit. I bombed so hard. And then I kept bombing for three years.”

For Toy Machine founder Ed Templeton, hiring Kevin Christy to do a series of deck designs was a no-brainer. Christy’s a deeply talented, ferociously independent artist. But their collaboration didn’t come about during a skateboarding session. It happened at Disneyland.

“I met Ed through an artist friend of mine called Ashley Macomber,” Christy says. “Ed has shown [his work] at a gallery in LA called New Image Art that I’ve shown at, so we’re in the same circle. Ed and his wife [photographer Deanna Templeton] love going to Disneyland. My wife at the time and I loved going too, so we all started going.”

The Templetons knew that Christy was an accomplished artist. On one trip to Disneyland, they got talking about a potential collaboration, and Deanna suggested that the series be based on Christy’s often hysterical Twitter feed. Christy loved the idea. “I started culling jokes which I thought would be good visually, that would match the Toy Machine aesthetic,” he says.

The decks that came out of all this are provocative, tongue-in-cheek and wonderfully weird. His tweet that read ‘Whenever I see a hitchhiker, I think they’re giving me the “thumbs up” for being too smart to pick up an obvious murderer’ became a grinning demon flashing a monstrous thumb.

And again: fucking Disneyland. It seems strange that the most corporate, controlled, sugary place on the planet could result in such a great independent collaboration, but it fits in perfectly with Christy’s story. He’s a walking whirlwind of contradictions and creativity who does everything and draws his inspiration from everywhere.

“I could walk around Disneyland and go on rides all day,” he says, laughing. “The rides are sweet. Whatever you want to think about Walt Disney, the man was an artist. It’s a pretty huge thing for an artist to make things out ideas, and he made some pretty huge endeavours. He was insane.”

Christy grew up in La Crescenta, a quiet Los Angeles suburb north of Hollywood. His dad taught elementary school, and his mom worked for the phone company. Christy got into skateboarding when he was nine years old – this was the mid-1980s, the time of the Bones Brigade, Vision Streetwear, Santa Cruz. It was a good time to be a kid in Los Angeles.

“I was already into drawing, and that style of art was so good, it drew me into the whole culture of it. And skating in general was the most fun I could have at the time. I didn’t know how the graphics were made, or how to draw that way, or half-tone dots or screen-printing. They were not only beautiful but unattainable. Like, I don’t know how to do that yet, but I want to figure it out.”

Christy started drawing, and he never stopped. He went from skate art to comic books, ploughing through issues of arts bible Juxtapoz Magazine and attending art school. He idolised companies like Toy Machine and skaters like Templeton, adopting the latter’s brown Dickies and trucker cap style. Christy was never going to be a professional skateboarder, but this was around the time where he needed to start paying bills. With his art not quite at the paying-bills level, he turned to LA’s career of choice: acting.

LA does this to people. It’s always been a place where anybody can express themselves, where corporate monoliths like Disneyland can comfortably share space with independent creators. In a city that rewards creativity, Christy was never going to be just a starving artist.

“I acted in a commercial with a comedian named Bobby Lee, and I went to see him do standup,” says Christy. “That was my first exposure to it, where I thought, ‘I could do this!’”

His first show was on a Sunday at the Comedy Store on Sunset Boulevard. He was up for three minutes and did “Okay, pretty good.” Encouraged, he went back to the next open mic on Monday. “I just ate hot shit,” he says. “I bombed so hard. And then I kept bombing for three years.”

But he didn’t stop. LA doesn’t just reward people who are creative; it rewards people who don’t quit. Ask any of the dozens of actors who hit it big later in life – and ask Ed Templeton, whose first two companies ate a spectacularly large amount of hot shit before he finally started Toy Machine in ’94. For Christy, sucking at comedy was no reason to stop. “What I really liked about it was that I was so terrible that I realised it was going to take me a tremendously long time to get good at,” he says. “There was something appealing to that; I was going to have to earn every bit of success.”

Christy doesn’t bomb anymore. He’s a recognised standup talent, a respected actor – most recently starring in Showtime series Masters of Sex and, above all else, an accomplished artist. His watercolours and inks show a huge number of influences, ranging from surrealism to comic art.

They’re also not what you’d expect from someone like Christy. Onstage, he’s open and self-deprecating, and in person he’s got an even more wicked sense of humour. But his art is often ominous, provoking some uncomfortable responses. Mouths yawn in huge, black voids. Geysers erupt from screaming zombies. Christy says he deliberately steers away from easy explanations for his art – he wants everyone who sees it to draw their own conclusions. Unlike his comedy, there’s no punchline.

And there’s a sense that while he loves comedy, while it’s a rich vein of experience to draw on, he knows just how fleeting it is. His jokes will vanish. But his Toy Machine decks, and his paintings, will stick around for a while.

To work in so many fields, you have to have a level of independence – and, Christy says, it’s easier to do that in LA than in most other big cities. “There are still pockets of Los Angeles that are inexpensive to live in, if you can find them. You can do your own thing. New York and San Francisco are so expensive, but you can live cheap here, do your thing, and make it work. LA is an open space, and you can make your own way.” 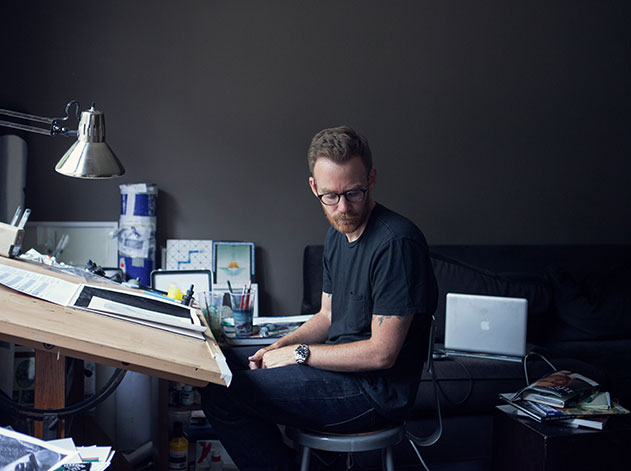