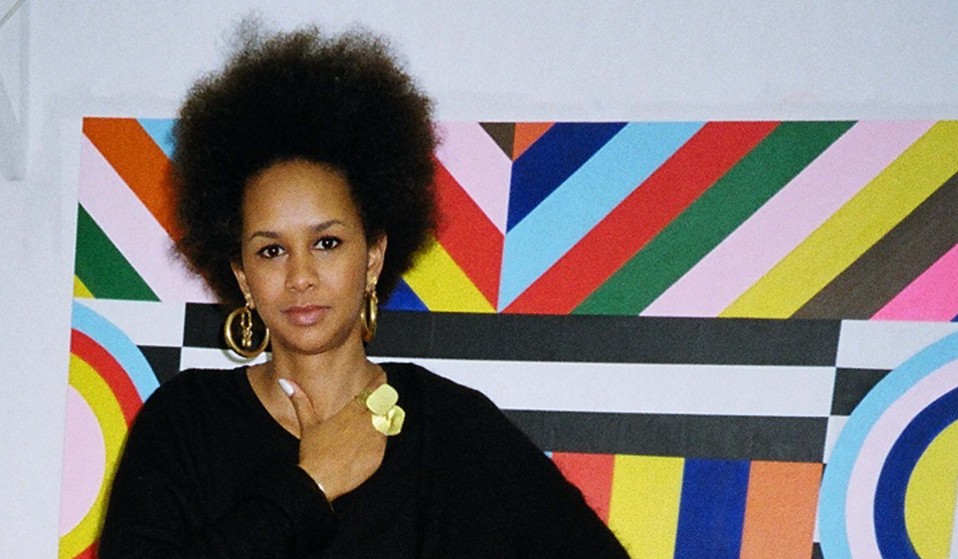 Known for her blend of colour, dialogue and decoration, London street artist Lakwena Maciver brings her signature murals to Shoreditch’s Boxpark. Huck caught up with her as she was putting the finishing touches on with her new exhibition, Up in the Air.

The sun has made a surprisingly long appearance in Shoreditch, London’s creative hub, perfectly setting the scene for street artist Lakwena Maciver’s colorful new show, Up In The Air. It’s Tuesday afternoon and Lakwena, along with her team, is putting finishing touches to her new pop-up space at Boxpark, adorned in her signature style that combines bold inspirational words with bright colours and kaleidoscopic patterns.

Taking a break from painting at the coffee shop across the street, I ask her to describe her work in three words. Mid-bite of her smoked salmon sandwich, she pauses, thinking deeply: “Bold, gold, and electric!” she replies.

Exploring concepts of mythology, philosophy and faith, the North London-born artist has the ability to turn heads and touch hearts at the same time. Her murals – featuring phrases such as ‘You’ve Been So Good To Me’, ‘The Highest Love’ and ‘The Power Of Girl’ – serve as vibrant symbols of positivity and affirmation within the city landscapes she paints in.

Reflecting on her influences, faith and goals as an artist, Lakwena sat down with Huck to talk about her new exhibition, which she describes as a “contemporary expression of worship”. 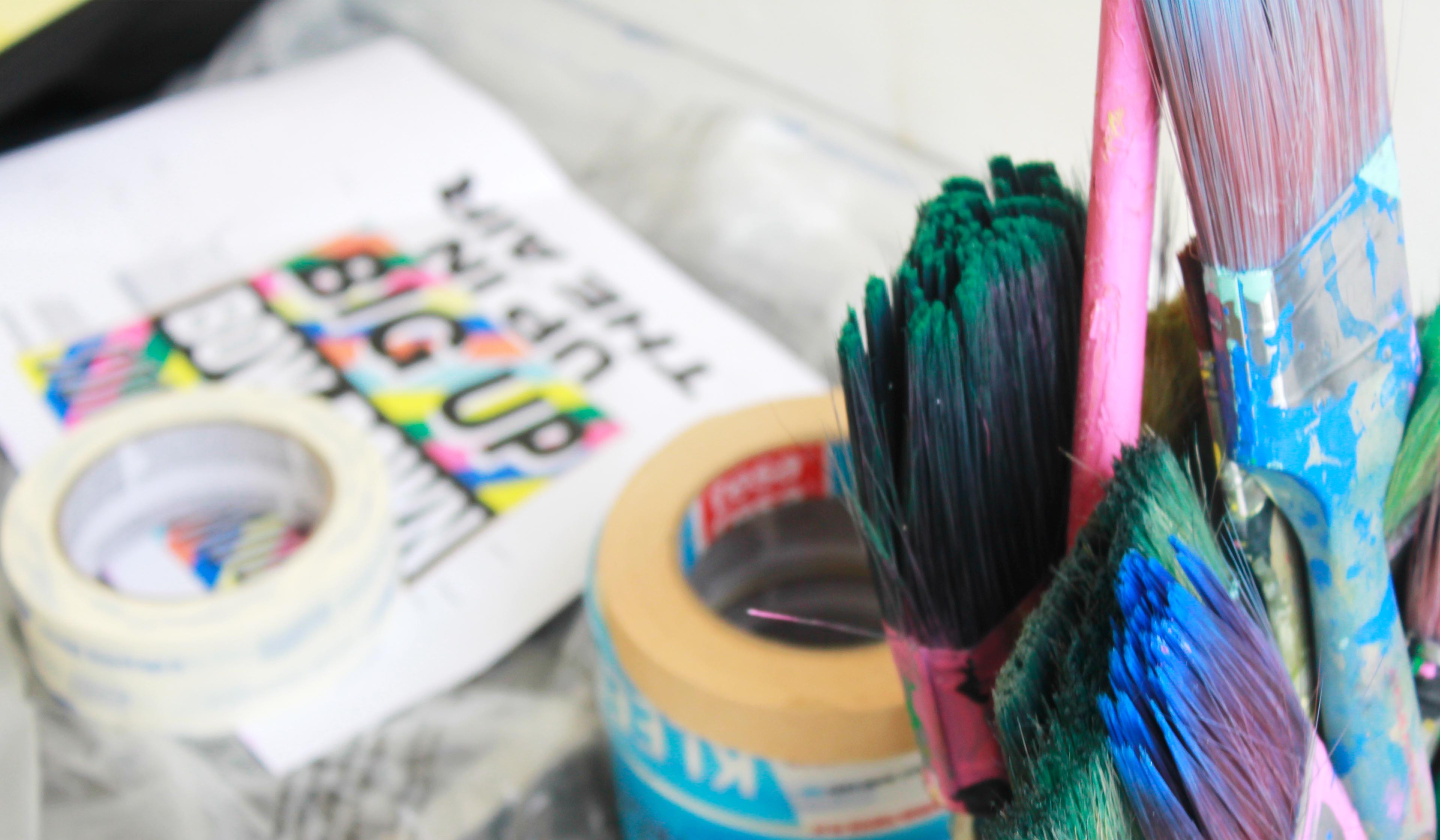 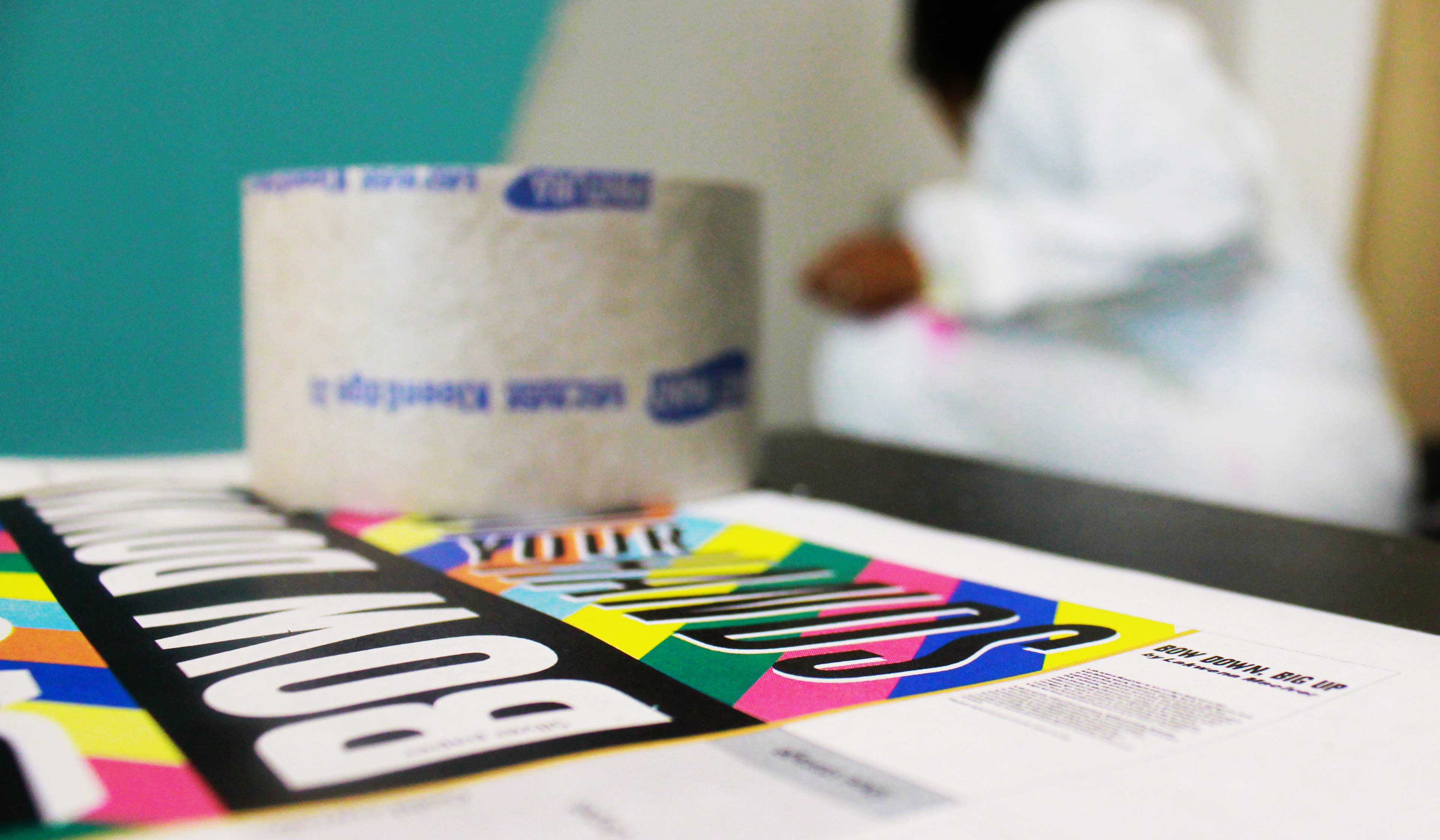 At what moment did you decide to literally be vocal in your work and use words?

I think I’ve always used text and typography, even when I was a child. Words really interested me and I used to draw them a lot.

My childhood was kind of varied; having different experiences and living in different countries definitely influenced my work aesthetically. My mum and dad were both quite political. My mum used to do protest marches in London and I remember making protest signs and posters for her, and using a lot of text. That helped me understand the importance of words and how much power they have.

Are there any particular words that mean a lot to you now?
In terms of words that get me through the day, it’d definitely be The Bible – that’s also added to my understanding of the power of words. Naturally I’m a bit of a pessimist so it helps to meditate on words of truth and encouragement. 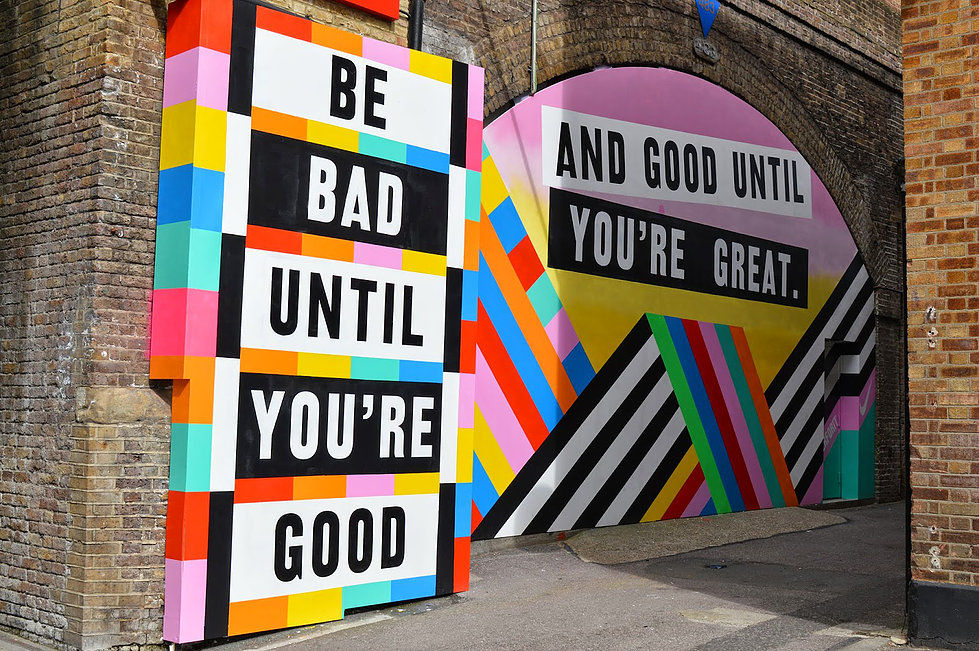 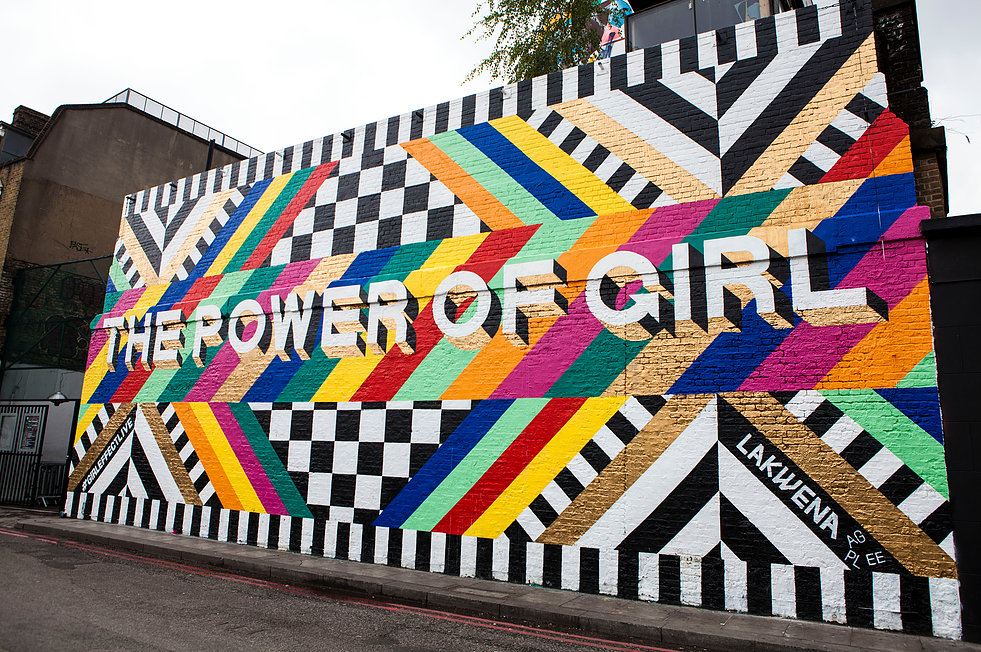 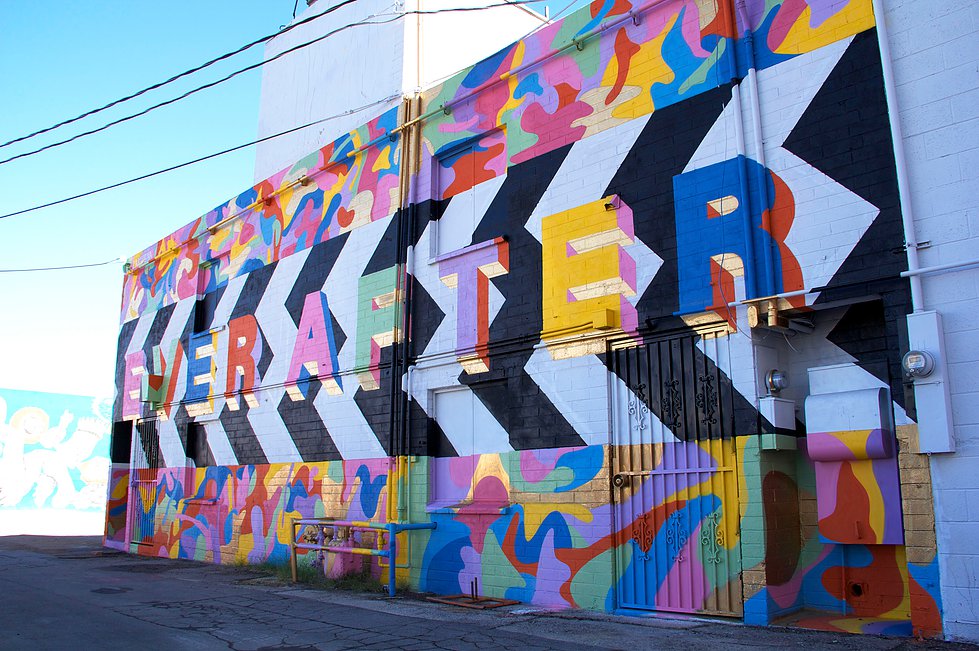 What’s your approach to making art?
A lot of my work has to do with reading and writing, and just thinking. Before I even start painting a wall, I think a lot about the concept and what I want to communicate. I love the colours and the patterns and all that, but that’s almost secondary to what I want to say.

So what would you say is the main inspiration behind your work?
I don’t get loads of time to read, but when I do it’s usually stuff that talks about philosophy and the power of art. It all started when I was in university and I studied work by a French philosopher and theorist named Roland Barthes. He wrote a lot about art and mythology, and how all artists are essentially mythmakers. And I found that interesting because artists really are just telling stories, whether it’s through making a film or painting a picture. It excited me to see myself as a storyteller and pushed me to make things. 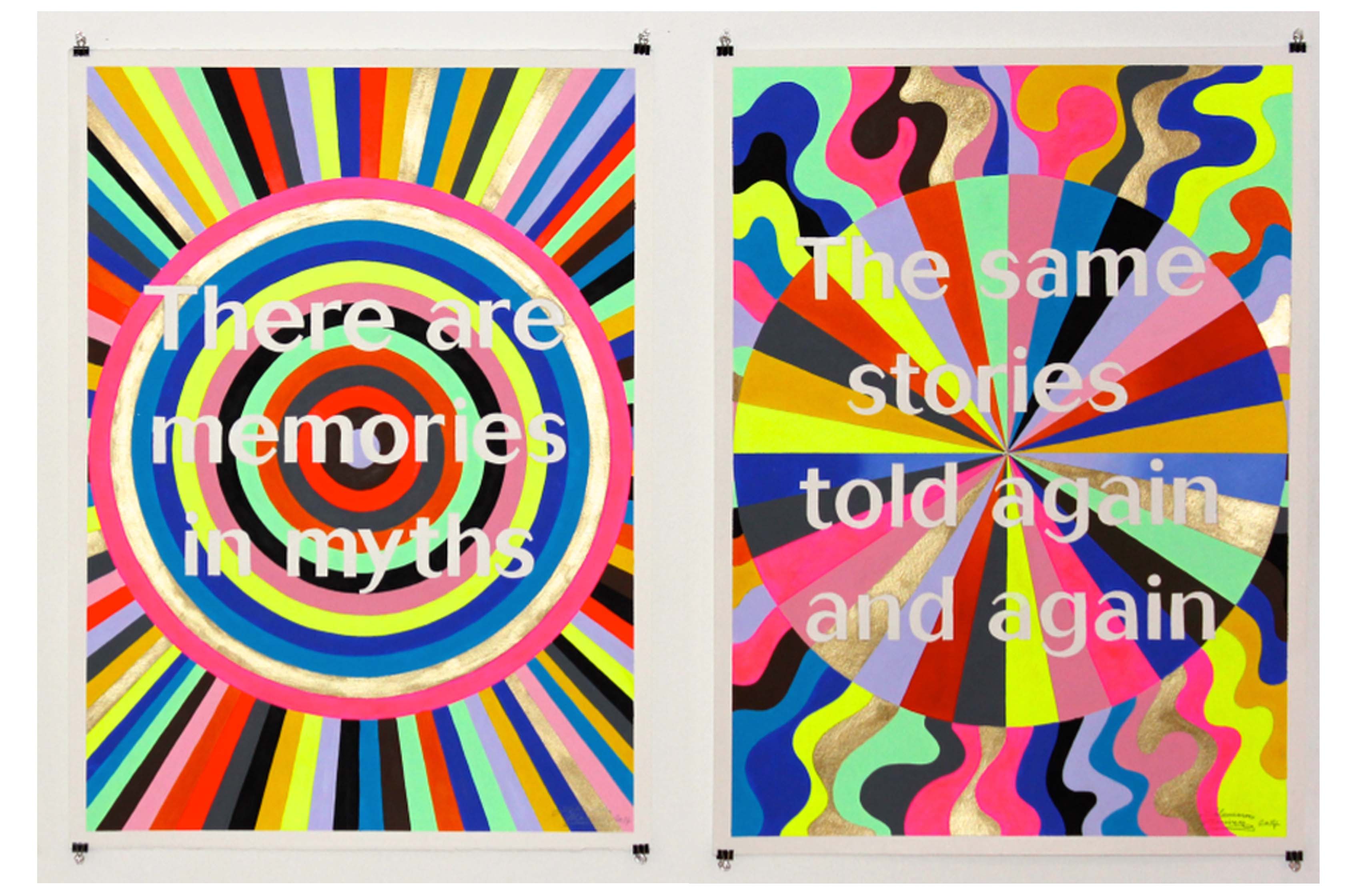 So what’s the story behind this upcoming show?

A few months ago, I read in the news that Gucci was going to have a fashion show at Westminster Abbey in June. That really interested me because there are loads of traditionally sacred spaces in this country that are now either flats, shops, or restaurants. It’s just interesting how much commerce and entertainment has kind of encroached on places like this. When Boxpark invited me to show my work at their space I was aware of how commercial the space is. So I thought, “how about I flip that?” and instead create a sacred place in this very commercial space.

It also has to do with timing. I’m having a baby in June, and there are so many other things that have happened that I’m really grateful for. So I think that also provoked this as well and made me want to do a show that’s about worship and thanks and praise, but it’s a very contemporary expression of that. 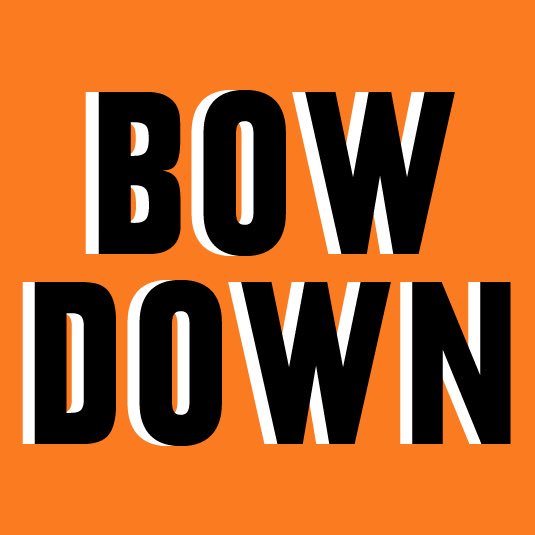 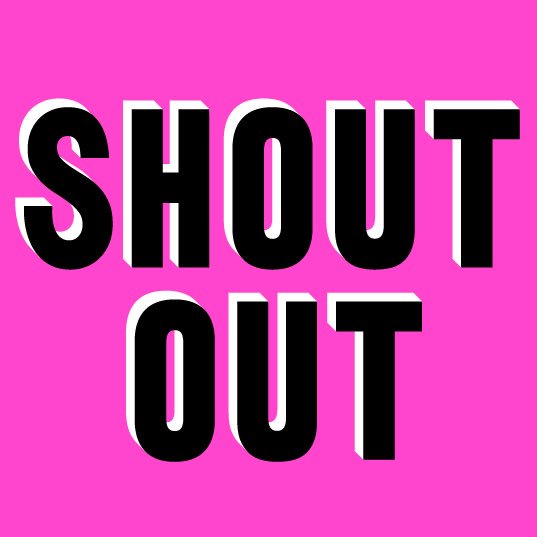 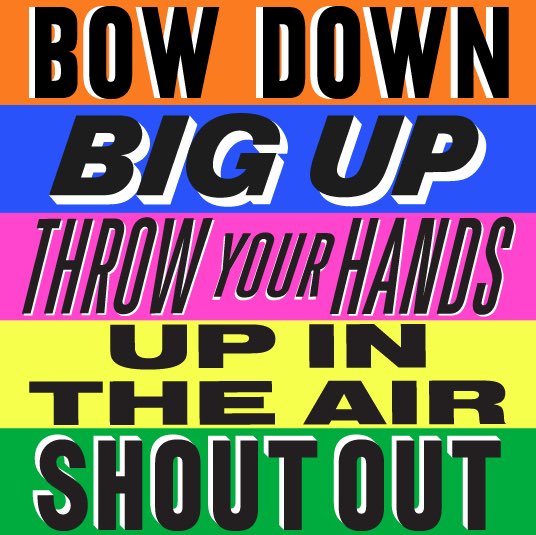 That’s interesting because when I first saw phrases like ‘shout out’ and ‘throw your hands’, I looked at that from a perspective of pop culture. It’s very hip hop-driven, but I guess it’s also a huge reference to gospel and Christianity.

Yeah, exactly! I was basically looking for ways to say ‘thank you’. There aren’t that many besides ‘thanks’ and ‘cheers’ – those are pretty much the only way. So I started thinking about how else you can be thankful and give praise.

What do you think is your role in society as an artist?

I think there’s a traditional idea of what God is; a lot of people see God in the colour of grey. I see God in fluorescent pink and gold and glitter and all of those neon textures – all of that is God to me. So I try to reflect that in a lot of my work.

I once read this quote [by philopsher Calvin Seerveld] that said as an artist it’s important to “fire your art until it emits sparks that warm, or burn, those it reaches.” And for me that how I see my work and my responsibility as an artist. 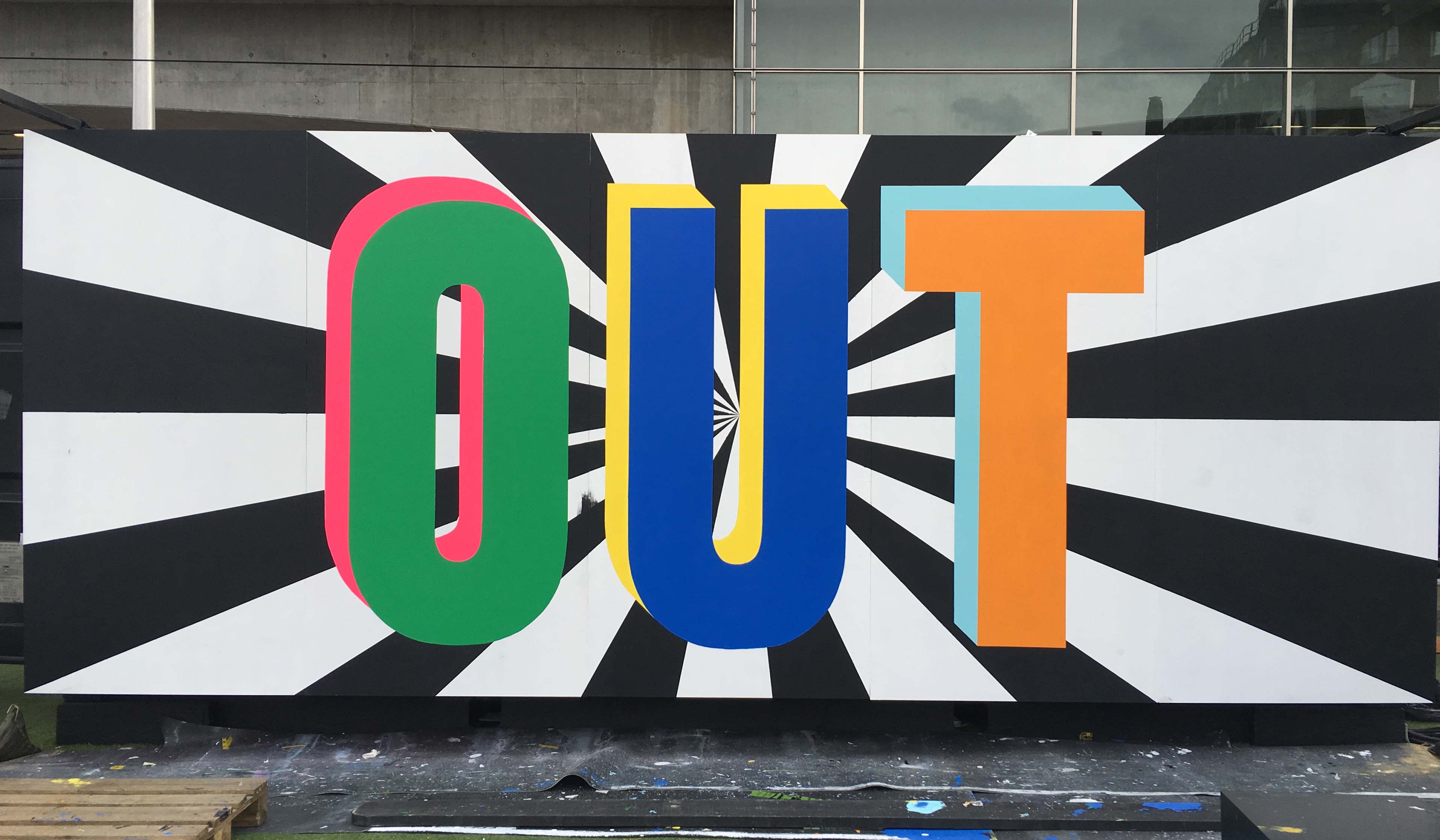 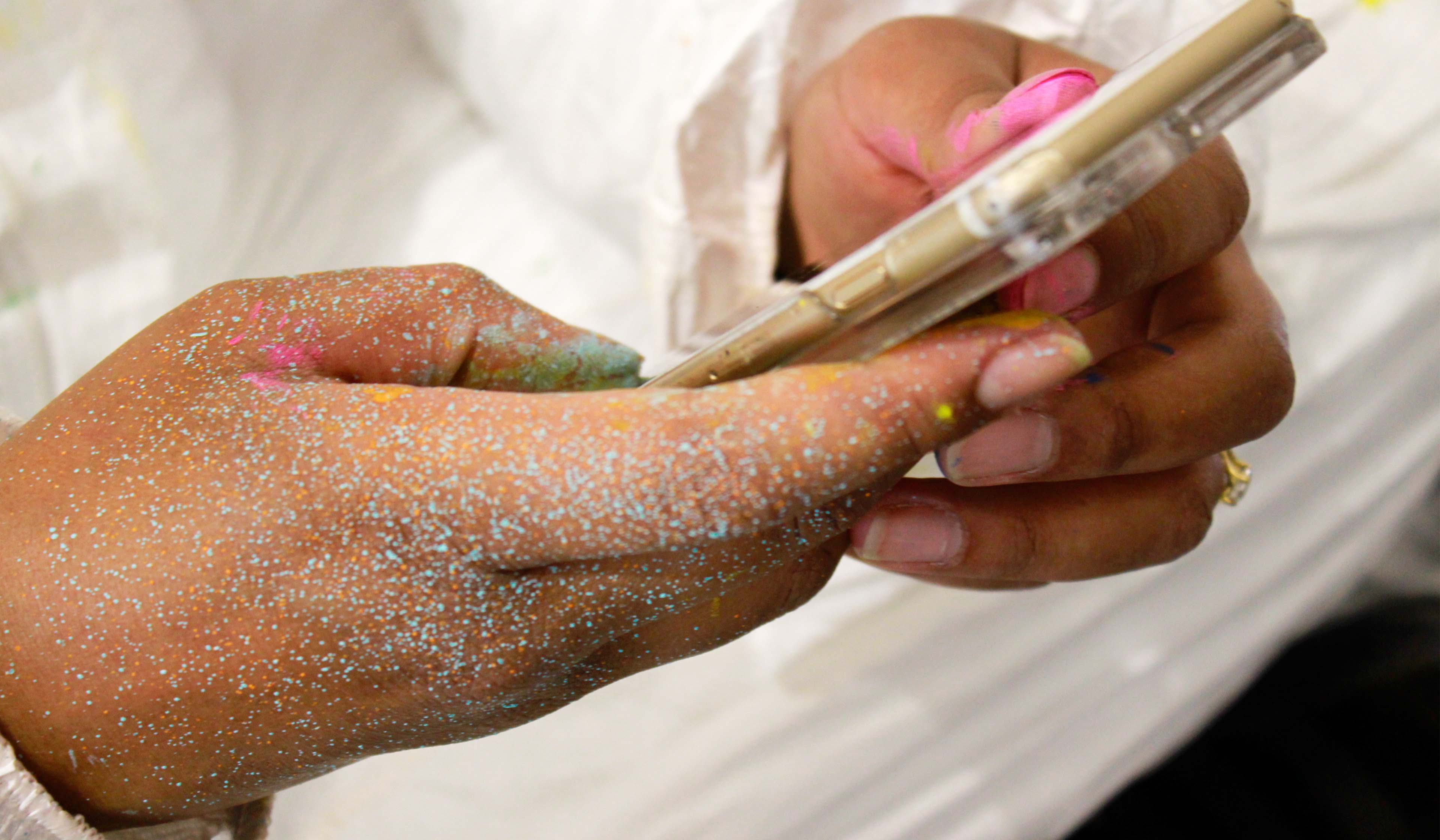 Lakwena Maciver’s Up in the Air exhibition runs from April 7th-17th, 2016 at Boxpark in Shoreditch.

Linkedin
RELATED ARTICLES
OTHER ARTICLES
Photographer Becky Tyrell went down to the fading banger and stock raceway to meet a community desperate to keep it alive.
A new law change is enabling Britain’s donor-conceived children to know the truth about their origins – but campaigners say the fertility industry must do more to protect people.
Photographer Sean Maung reflects on documenting a small town in Pennsylvania afflicted by high levels of unemployment, poverty, violence, crime, and addiction.
Activists and campaigners are fighting back against new laws that would seriously undermine the ability to take industrial action, calling it an attack on fundamental workers' rights.
A new exhibitions brings together the work of photographers who documented the deep unrest of these pivotal decades.
Following the release of his debut single, Deyaz talks battling addiction, dealing with his struggles through music, and building a budding music career from his living room.