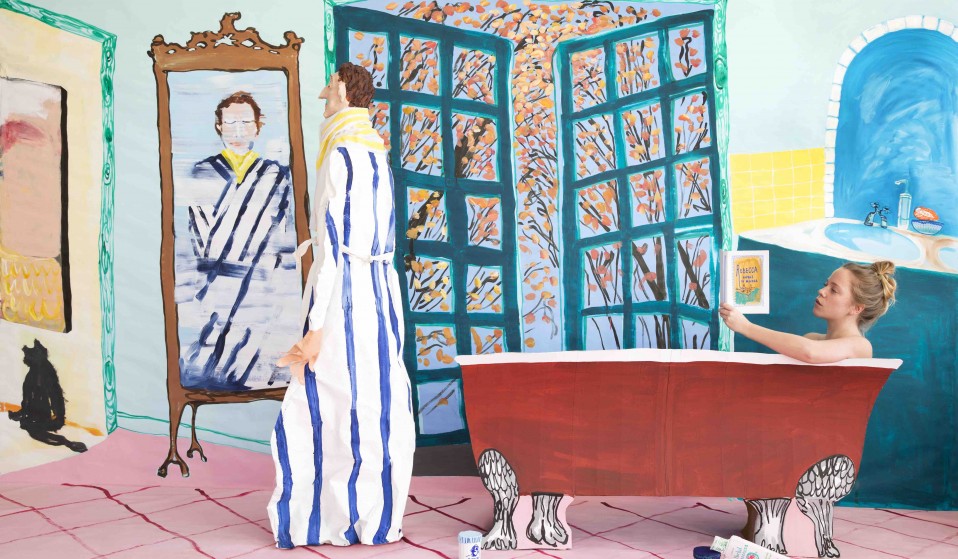 Mary Stephenson got so sick of being single that she created her own imaginary dates. Now she's using art to poke fun at society's perception of romance.

Mary Stephenson got so sick of being single that she created her own imaginary dates. Now she's using art to poke fun at society's perception of romance.

Artist Mary Stephenson has been single for a while. Once, at a wedding, some guy took her aside to offer some feedback, commenting: “What a waste.”

Mary wasn’t necessarily offended, she says, but thought, “‘How interesting that we have all these perceptions of each other.’ And it made me think about my internalised anxieties about relationships or love – how obvious are they? And what is that we have planned for each other?”

In her latest project, My Man, she stages and photographs her romantic fantasies alongside clay partners, creating the scenes with painted backdrops and props – from an impressionism-style picnic, to a date at a noodle bar, via a domestic scene in the bath. 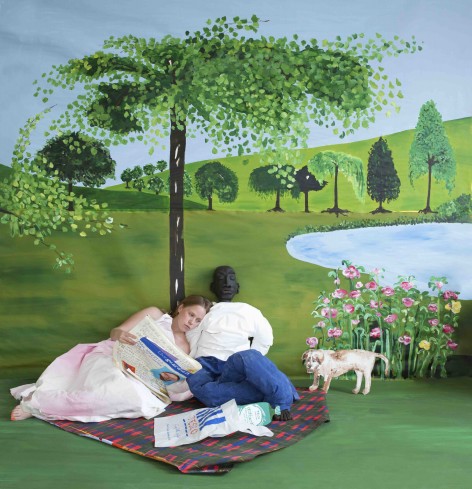 The men’s heads are made out of clay and their bodies are stuffed, like rag dolls; their eyes are closed. “It’s not meant to be about the men, they’re placeholder figures. You can read too much into people’s eyes, so if they were to have them, it would be too misleading. They put too much character and identity into people.”

Instead, My Man is about getting to the bottom of these fantasies and exploring whether she does actually want them, and where they came from in the first place.

“I find it quite difficult to detach my imagination from reality, and I think I tend to live in my projections quite a lot and get caught up in anticipation. So this is a way of controlling, constructing them, and almost playing out anxious thoughts.”

“Even if you start dating someone, the amount of images that go through your head at the start… are these valuable? Sometimes they feel much more vivid to me than real life. And what’s the difference? What I find interesting is the disconnect between our internalised thoughts and the way we construct things physically – choosing this café to come to chat, working in that office or wearing this jumper – what we want to portray about ourselves. I find that gap really confusing but forever interesting.”

Mary explains that during the staging of each scenario – which all take a considerable amount of preparation – there’s a lot of turmoil. “I find it hysterical when I’m making it. It’s quite frantic and I get caught up in small details. I think it’s very playful and fun, and I want it all to be humorous, but I do find that I end up feeling quite solemn.”

Her look in the pictures does come across as more melancholy than cheeky, and she confesses to even mourning each of her fake men. 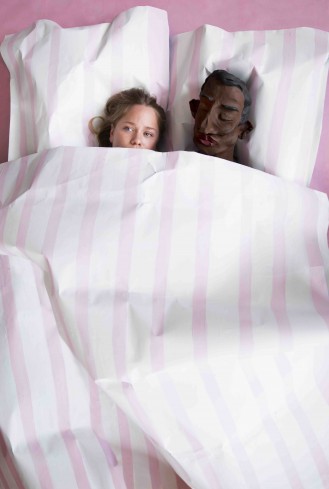 “They’re very passive, and you’re constructing a whole scene that someone else is in. But what remains – the final piece – is someone sitting on their own, just in your own head. I think there’s a release in it, but there’s also a weird mourning period when I take them down. Not even that it’s to do with wanting a relationship or anything like that, it’s realising that they’re just ideas in your head. And the process of playing them out is more cathartic than the actual final piece, maybe.”

There is one picture that looks out of tone compared to the vulnerable, sparse feel the rest have: the house party scene.

“I normally put so much pressure on myself to create such a particular space and to photograph it on my own and have quite a specific idea,” Mary says. Here, I had to give it up to 25 people and just be like ‘it’s up to you now’. There was quite sweet relief in that.” 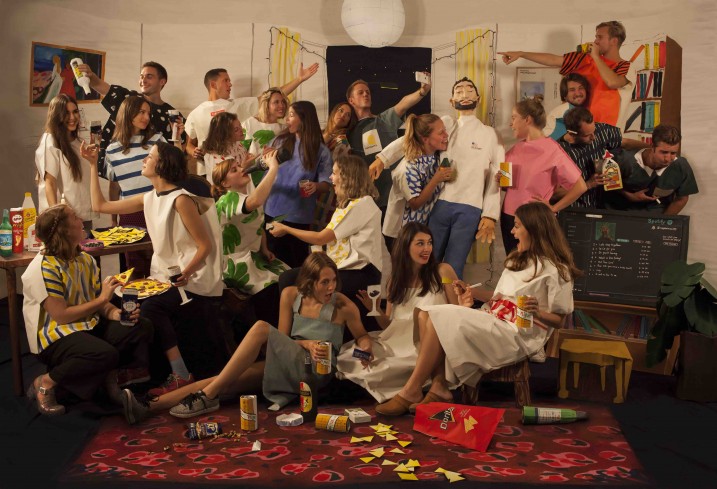 She traces back her obsession with the theatrical elements of life to being an identical twin and growing up with a “self-reference” in front of her. “You’ve got this marker of someone like you who is doing something really different; you look the same, have the same morals, but you’re playing out two different roles.”

Mary still hasn’t figured out where all her fleeting romantic images came from. “You don’t want to think all your ideas are from films and music, you want to be so much deeper than that! But maybe I’m not,” she laughs. Her real-life dates know about the project, too. “The ones who have heard about it generally find it very interesting and funny. I wonder whether they find it threatening or not! I don’t think they do.” 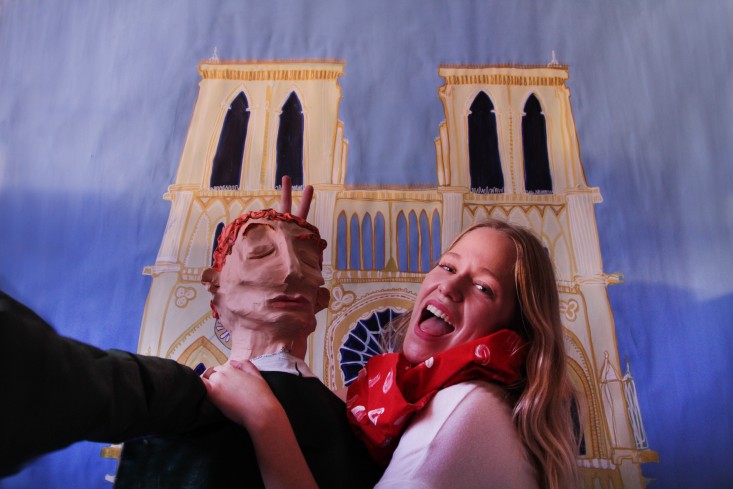 Seven clay dates in, she finds the process quite liberating, and says these date scenes don’t actually “evoke” that much for her. “The scenarios are definitely idealised from what’s been projected upon us and what we expect ourselves. There’s actually relief in feeling that I don’t want to be in those things. But then I have been dating clay men, so … Maybe there’s something else I need to work out!”, she laughs. 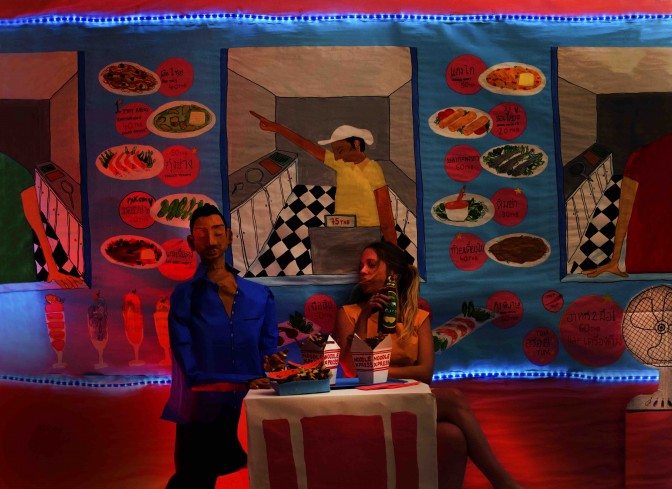 My Man opens at Downstairs at Mother on 27 February. Find out more about Mary Stephenson’s work.

Linkedin
RELATED ARTICLES
OTHER ARTICLES
Photographer David Corio’s archive offers a glimpse inside a revolutionary era of music and nightlife.
A group of young Palestinians have found temporary freedom in the act of parkour, reimagining wreckage and ruins as a series of high-octane playgrounds.
Sean Maung’s photos are a love letter to the Black and brown communities that make up New York.
As the Scottish government announces a rent freeze, an activist with Living Rent who fought and won shares how they did it, and what must come next.
Cindy Campbell recounts how her brother ushered in a new era of musical culture at a party she held in the Bronx in ‘70s.
Thousands attended the annual event this year to wheelie through the city and call for ‘knives down, bikes up’.