Art & Culture / Art / Is Lebanese cartoonist Mazen at the forefront of resistance culture in the Middle East? 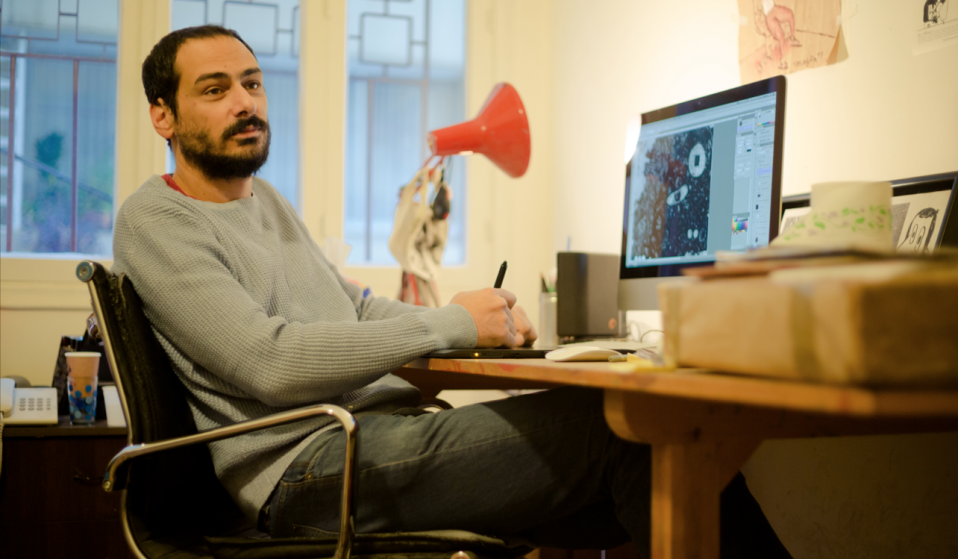 A wry take on life in Beirut into hard-edged comics and bomb-fuelled jazz.

A wry take on life in Beirut into hard-edged comics and bomb-fuelled jazz.

“It’s a fucking outlaw place, no one respects any laws here,” says Mazen Kerbaj, laughing and gesticulating at the Beirut skyline from his sixth story apartment, discussing the insane cab ride I endured getting to his place. “Sometimes it’s funny, sometimes you go fucking crazy. We always say in Lebanon that outside is civilisation; you have laws, people wait in line. But somehow, despite this, day-to-day life in Lebanon is easy, everything works.”

Arriving in Beirut a week previously, the taxi journey was the least of the challenges I faced trying to meet with the Beirut-born artist. After weeks of emails arranging times and places, US intervention plans for neighbouring Syria almost triggered an evacuation of international visitors from the city, necessitating some last-minute renegotiations. “Same shit, different day,” Mazen muses by way of explanation. “It’s not something we really worry about, war is always present here. When we were young, we understood what was peace, but it was an abstract concept. It’s like we’re always living in-between wars in Beirut. We have times of peace, and we’re in a time of peace now, but I always think that in this region, especially between Syria and Israel, you can never plan your future.”

It’s easy to see how this ‘live today’ philosophy informs Mazen’s work. For years he spoke through Cette Histoire se Passé, a cartoon in Lebanese newspaper Al-Akhba that documented a life beset by war, gaining international recognition more recently with his Kafka-esque tribute to Beirut, Lettre à la Mère. Mazen’s comics depict everyday life in Lebanon through satirical observations of the socio-political landscape, channelling a cultural situation that is surreal to outsiders, but that’s been a reality his entire life. 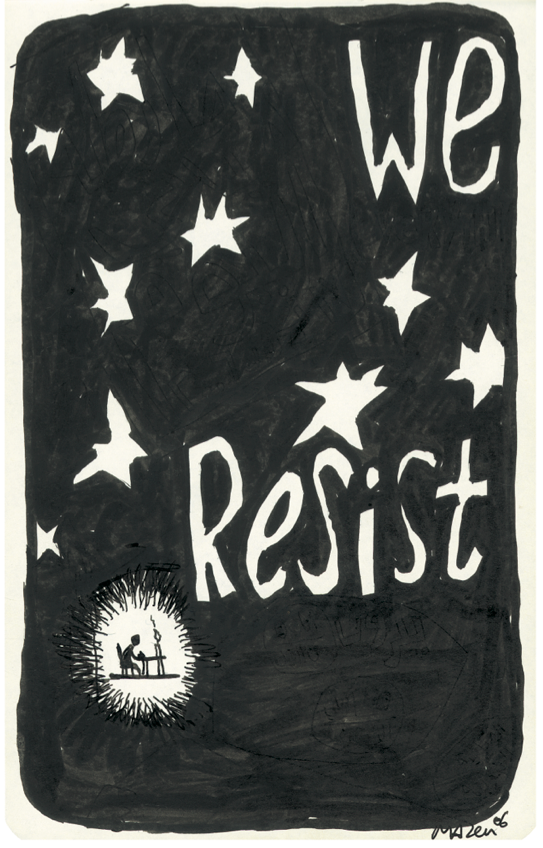 “In Lebanon there was no publisher of comics, no culture of comics,” he ventures, kicking back on his sofa surrounded by a library of graphic novels and art. “So I published my own books and sold them for a price that was suicidal. But they needed to exist. People were amazed that there is this guy drawing himself, drawing Lebanon, with drugs shit in there. I mean, most people thought it was a little fucked up.” His books found a select audience and acted as a catalyst for a now thriving underground comics scene in Beirut. “Some very successful Lebanese artists told me that it was because of this they started doing comics.” Mazen continues. “I was never conscious that I was doing something big, but it gave an idea to many people.”

Despite his role in the city’s nascent comics scene, Mazen is possibly best known as an accomplished improv musician and the man behind Beirut’s annual experimental music festival Irtijal, as well as independent record labels, Al Maslakh (The Slaughterhouse) and Johny Kafka’s Kids Menu. “It all really started as a joke for me, I never thought I’d play music for real or become a musician. But my long-time musical partner, Sharif Sehnaoui, offered me a trumpet and I got hooked. Eventually I thought that I could fuck around, do some experimental music, add tubes and shit. The funny thing is that, while becoming more and more advanced in regards to this technique-less style, I really created my own musical language.” 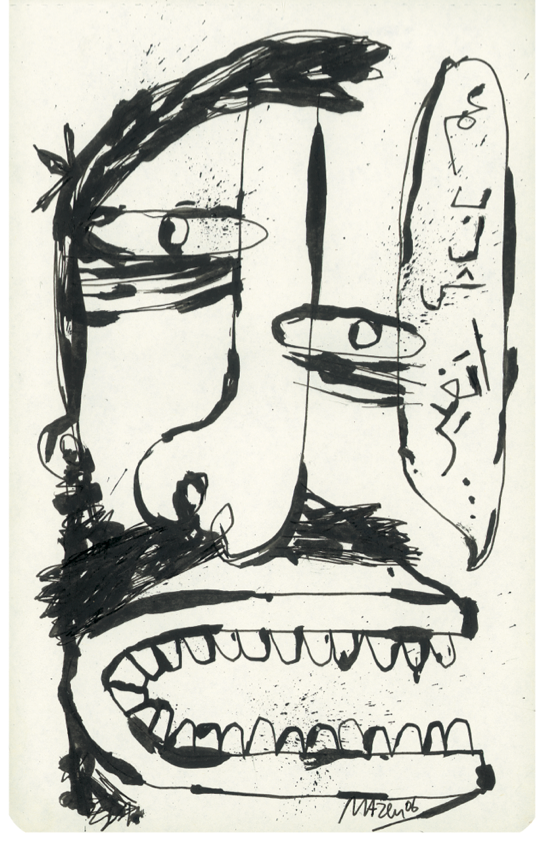 This language was never more realised than during the July War in 2006, thirty-four days of conflict between Israel and Hezbollah paramilitary forces that. It was during this time that Mazen established his improv credentials with the composition of ‘Starry Nights’, a free-flowing soundscape that marches on for forty minutes. While Israel relentlessly bombed the city, Mazen took to his sixth-story balcony each night to record against a bomb-filled backdrop, weaving his trumpet through explosions and car alarms, punctuating the flow with, at times, an unbearable silence. The result is a portrait of life in war that most journalists will never realise.

“My wife would go to the bedroom and I would go outside to record,” he recalls. “I’m no hero, I was really shitting in my pants, but I thought, ‘Fuck it, I can defy the situation.’ I felt like I was defending my country, and fighting back with my trumpet, but I was freaking out. This situation puts you in an emergency, and gives you an energy for working because you have nothing else to do and you have to fight back. I was very lucky to live this as an artist; I was very unlucky as a human being, it was terrible. But as an artist it was really a very intense period of work.” 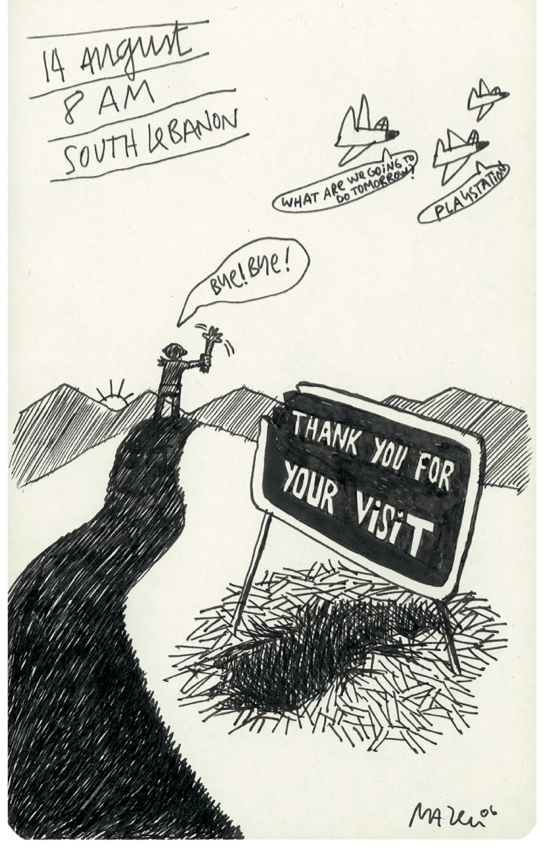 Constantly pushing boundaries, Mazen is currently working on two projects fuelled by improv: Wormholes, an audio-visual performance with partner Sharif in which Mazen paints live in response to Sharif’s guitar; and a minimalistic drawing style that sees him use both hands simultaneously.

“[Wormholes] is something I’ve been wanting to do with Sharif for a long time,” he explains, “but could never figure out how. I didn’t want the picture to exist at the end, I wanted it to be gone like the music. I eventually found a way by drawing on glass, using inks and solvents with light projecting up through the glass to create these shifting patterns, and then wiping it away. I’ve also been developing a two-handed style of drawing for comics, one with a big thick pen or brush and one is with a thin pen or pencil. People see me do it and say, ‘What the fuck, this is totally crazy’. It/s kind of ambidextrous, but I’m not really. It’s just a really spontaneous, fast way to work.”

It’s hard to contextualise Mazen’s place in Beirut which, like the artist, is a city of contradictions; liberal yet governed by deep cultural and religious values, although at times its hard to think of it actually being governed at all. “It’s really strange in all senses,” muses Mazen. “There is no separation between rich, poor, Arabic, French, religious extremist, liberal. Everybody lives together in a very small area, and there is one street between rich and poor. Outside it might be easier to see the ‘culture’, but we have no roots that everybody agrees on. So it’s a really strange situation. I have no idea what [Beirut culture] is or what it looks like.” 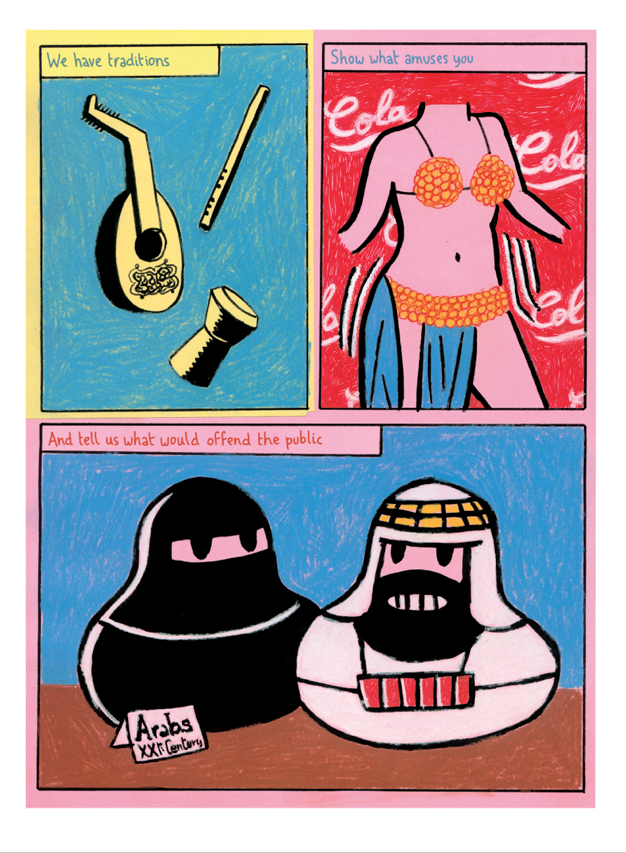 As we chat over strong coffee, it’s easy to pick out Mazen’s Arabic roots in the pictures that adorn his walls, modern illustrations with a distinctly Middle Eastern styling. Internationally, he’s often cited as an Arab artist at the forefront of resistance culture in the Middle East, but does he feel comfortable with that tag? “I’m very reluctant to use the term Arab artist. I am an Arab for sure, I’m not questioning this, but I wish to see myself as an artist or a musician, in that my work should be evaluated regarding the history of art and music, not smaller. What people expect from me as an Arabic artist is to talk about war, always. It’s normal; we are ‘exotic’. If I come and speak about spring, or the flowers, I don’t fit any more with the expectations of the audience. But we can also talk about other things, I mean, you also fall in love, you can also get sad, and you can also lose someone. Being Lebanese you are not just living the war, you have day-to-day life. You eat, you shit – same as everyone.”

Linkedin
RELATED ARTICLES
OTHER ARTICLES
A new documentary tells the story of an unassuming cul-de-sac of 13 timber framed houses built by Fusions Jameen – London's first Black housing co-op.
Alternating between colour and black-and-white, the photographer chronicled sexual liberation, economic crises and the repercussions of the war in Vietnam.
Proponents of personality tests argue that they’re necessary to find the best person for the job – but in practise, they’re often discriminatory.
Ireland’s national sports are modernising. At the forefront of this movement is Na Gaeil Aeracha, the country’s first ever queer GAA club.
Meg Handler’s photos capture diverse groups of New Yorkers coming together for the collective cause of civil rights.
Jack Lueders-Booth reflects on capturing the community that lived and worked along the city’s busiest railway route during the 1980s.