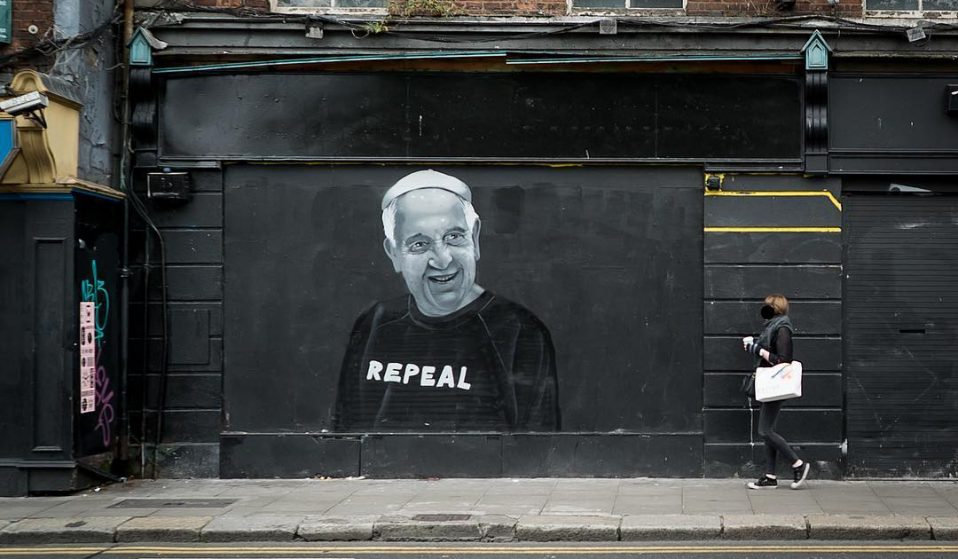 With their bold ongoing project, Grey Area, Irish collective SUBSET are protesting the criminalisation and censorship of street art.

With their bold ongoing project, Grey Area, Irish collective SUBSET are protesting the criminalisation and censorship of street art.

There wasn’t much of a fuss when a 40-foot mural dedicated to the grime rapper Stormzy first appeared on the outset of Dublin’s Smithfield Plaza in March 2017.

Erected by the art collective SUBSET ahead of a string of shows that the rapper was set to play in the capital, it became a local hit right off the bat. As well as being a go-to photo-op for Instagrammers, the mural stood, more importantly, as one of the few Irish artworks to celebrate black artists (the only other example being a statue depicting Thin Lizzy’s Phil Lynott on Grafton Street).

For many people, this was their first exposure to the collective. In fact, SUBSET – which consists of 10 artists – had been in existence some eight years prior, initially under the banner of Rabbit Hole Promotions. However, this mural marked their tipping point. Each subsequent work became a social media event, until eventually they were being featured on Jimmy Kimmel Live after Conor McGregor commissioned them to create a mural for his training gym.

This success streak momentarily stalled in November last year, when Dublin’s city council ordered the removal of the Stormzy mural. Having not obtained the required planning permission, SUBSET was informed that they had until December 15 to take it down.

Responding first by inserting a council worker painting over the rapper, once Stormzy was finally erased, they mounted to the wall a fake exhibition plaque, sarcastically describing the grey paint job as an aesthetic choice. A smaller monochrome mural appeared in the city centre thereafter, showing Donald Trump in a ‘Make Dublin Grey Again’ cap.

Despite this setback, SUBSET has clarified that they won’t be applying for permission in the future, due to the process being both too expensive and time-consuming. Their aim, they say, is to continue making their own rules.

“[Dublin’s] Planning and Development Act, which governs the production of large format art is not a suitable framework for creatives,” explains a SUBSET representative. “It’s prohibitive to the progression and evolution of artists, which has a negative impact on the city and its youth.”

“City Council has one idea of how this city should be run. We have another, and we don’t recognise their authority. The laws which govern them, we want to change. Why can’t we?”

By using predominantly empty spaces, the group draw attention to the hypocrisy of a city housing countless vacant properties in the midst of an escalating homeless crisis. As well as that, their work casts a light on the harsh legal ramifications currently faced by street artists, who can be hit with up to 12.5 million euro in fines and between six months to a year in prison.

“For most people, the quality of our work is good and that’s despite this environment,” add SUBSET. “If we had a more supportive one, [where] we are not made into criminals, then the sky’s the limit, really.”

This argument has taken shape with Grey Area – a new project which has seen the collective collaborate with over 20 other artists on 52 murals across the city. It also includes a short documentary of the same name, which was filmed concurrently.

Drawing parallels with the silencing of other such Irish artists as Brendan Behan and Samuel Beckett, Grey Area is a terse, stern and poetic statement of intent, which shuns the classic Irish narrative of exiling oneself as a result of these constraints.

“We have decided that if we are to go down, then we are going down swinging,” SUBSET explain. “The best people to throw a punch at are Dublin City Council, because they are public servants who we feel aren’t serving the public.”

“In relation to Grey Area, they have already requested we stop… We’ll do what we do and they’ll do what they do and we’ll have to see what happens.”

So far, only one of the project’s murals has been removed, but all of them are likely to be taken down if a single complaint is issued. This applies to privately owned buildings too, even if a proprietor grants SUBSET permission.

The irony is that the stand-off has created a version of the Streisand Effect: the more the council attempts to remove these murals, the more support of SUBSET increases.

This appreciation makes sense – as the Grey Area documentary shows, the collective is focused on repurposing the more decrepit corners of the city. Having taken up residence in the city’s Point Village, an almost derelict shopping centre in the Docklands which halted development following the 2008 financial crash, SUBSET’s artists are erecting temporary canvasses and 3D installations on its empty walls and shop-store windows.

“We were able to inject life into a place that fulfils no purpose,” add the collective. “This was a blank ghost shopping centre. Now it’s a vibrant cultural hub.”

Linkedin
RELATED ARTICLES
OTHER ARTICLES
The revered showbiz chronicler recalls his journalistic beginnings, documenting subcultural scraps in the ’80s.
While protests over abortion rights rage in the US, access to abortion services is still almost nonexistent in parts of the UK.
In the last of our dispatches from OFFF Barcelona, Rufus Deuchler and Vincent Gault discuss the future of creative process.
The situation in Afghanistan remains dire, with many groups facing persecution at the hands of the Taliban.
In the latest OFFF Dispatch, the enigmatic designer dives into his process, connecting the dots between his unique and varied creative output.
Writers Matt Foot and Morag Livingstone explore how four decades of collusion between the government and the police have slowly eroded our right to protest.