Text By Interview by Samantha Maine

As his hilarious Hate Mail Kickstarter video storms the internet, here’s illustrator Mr Bingo on making fun of serious business and learning how to say no.

As his hilarious Hate Mail Kickstarter video storms the internet, here’s illustrator Mr Bingo on making fun of serious business and learning how to say no.

“My name is Mr. Bingo and I’m an illustrator and person. I’ve worked with people like the Washington Post, Byron Burgers, Jimmy Carr, The Mighty Boosh and Doritos, but what I’m really good at is drawing dicks on postcards and sending them to strangers; that’s my Hate Mail series which turned into a book. Some people say I’m the Justin Bieber of drawing; others say I fuck about for a living.

‟I was always into drawing from an early age and it was the only thing I ever really wanted to do, so throughout school I was really clear that I wanted to do something ‘creative’ and art based. I was really lucky when we were sent on ‘work experience’ when I was sixteen; I managed to wangle a place with my Auntie Penny who is a self-employed silkscreen printmaker. I realised at this point that you could work for yourself and there was such a thing as an ‘arty’ career. I just couldn’t ever see myself doing a ‘normal’ office job. 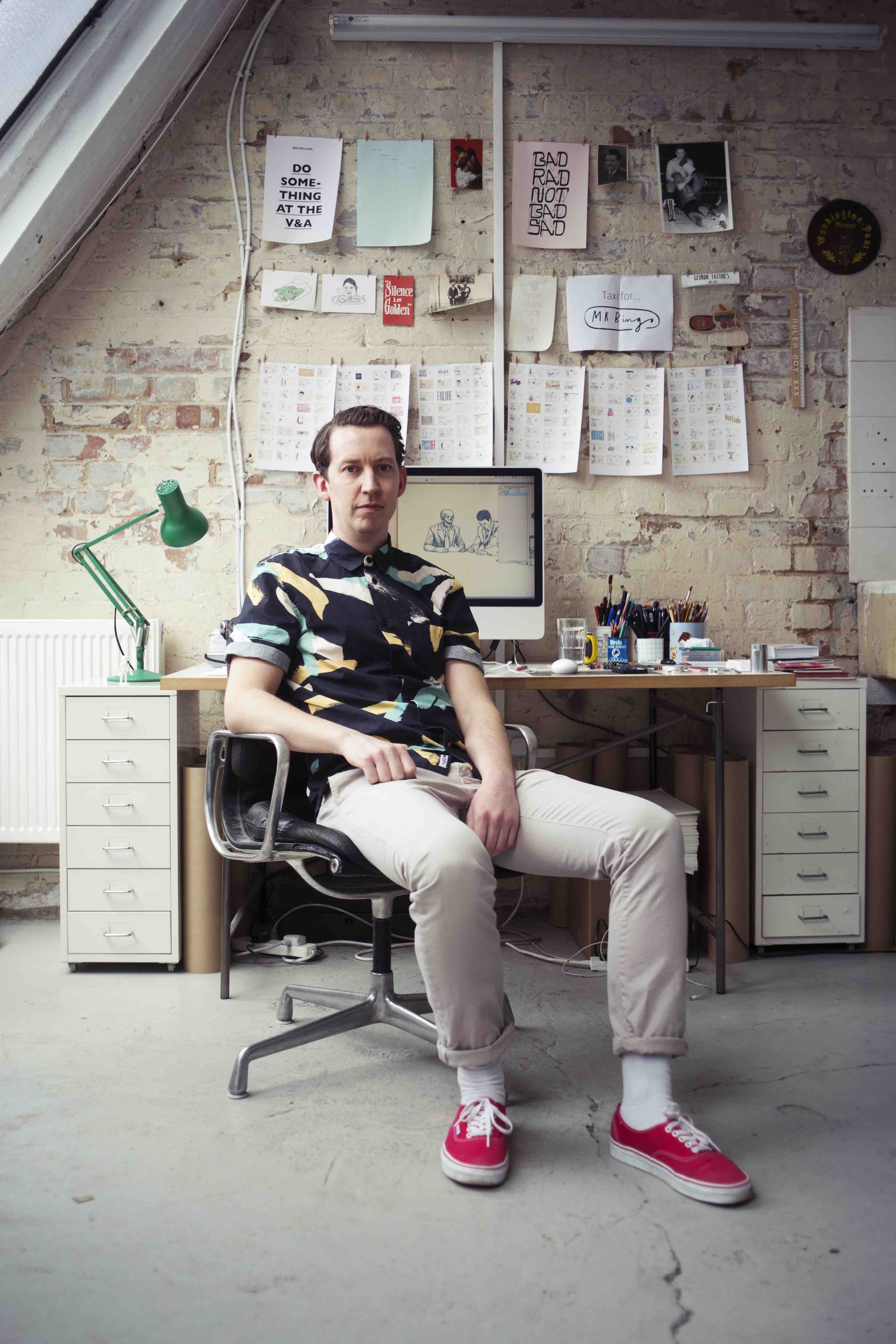 ‟When I went to art college, there was a moment at the end of my first year where we had the chance to ‘specialise’ in Graphic Design or Illustration. I didn’t know what I was good at, so the tutor put it to a class vote; I was voted into going down the path of illustration, so thank fuck for those people in that moment as they kind of decided the direction of my future!

‟When I left university I still didn’t really know what I was good at, I just knew I loved drawing, animation and humour and wanted to carve some kind of a career out of these things. I was working at a PR agency back in 2003, and I remember getting an illustration job that was paying £1,000 – which seemed a lot at the time – so I made the decision to quit my day job. Somehow it worked out and I’ve never had a proper job since that day. It made me realise that you can take risks and things will work out. I always advise people to do this. If you’re not happy with something, change it, throw yourself into the unknown and it’ll probably be fine. 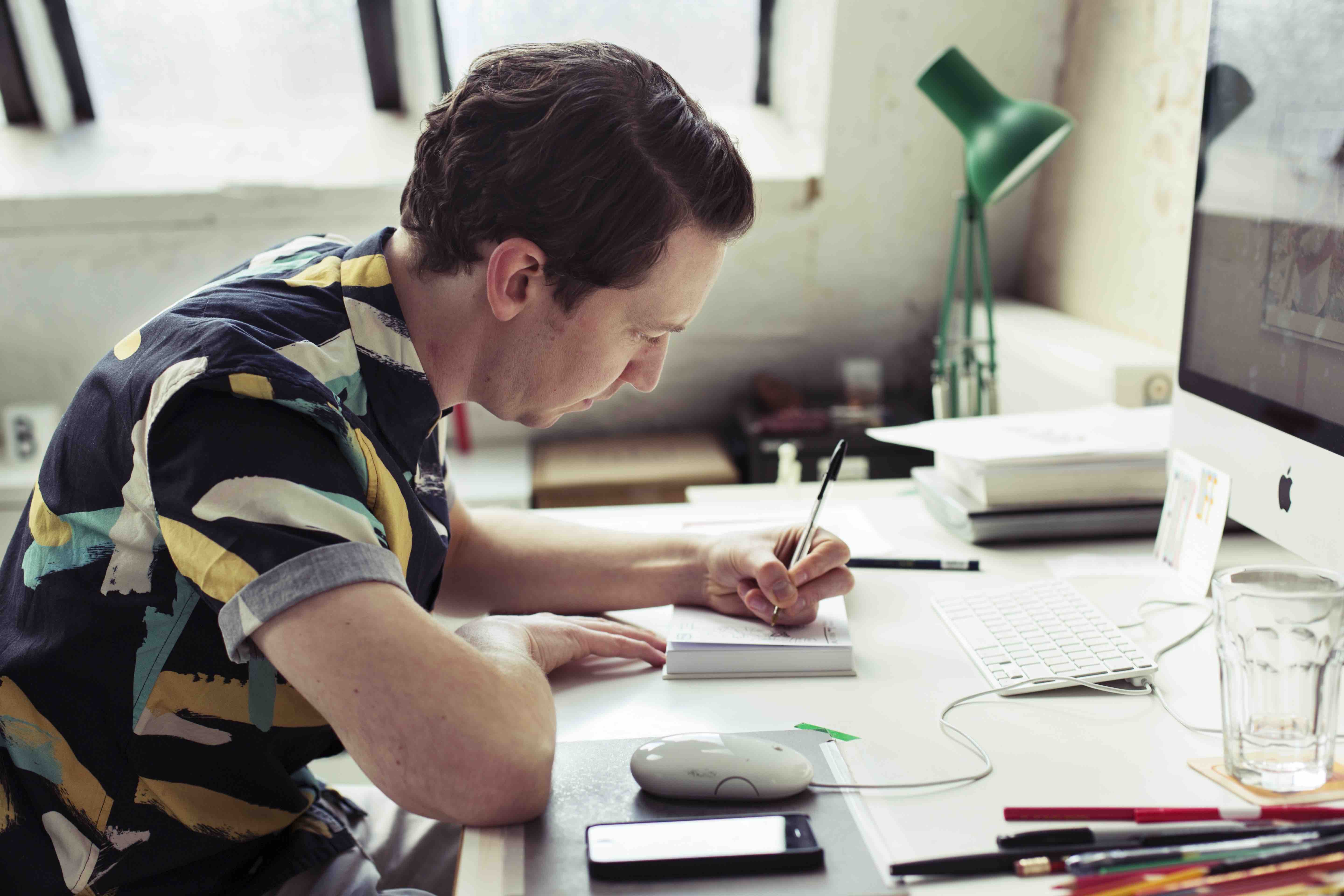 ‟One thing that’s always been really good for me is being able to make funny work. People like funny stuff, it sells things so you can work in advertising and it makes boring stuff more interesting and fun, so you can do a lot of editorial work. Funny work is also very shareable so the Internet likes it and my work often ends up reaching big audiences. It isn’t particularly current or ‘on trend’ in terms of style, so my secret to staying on top of things and staying relevant is to constantly come up with new ideas. Funny illustrations will always be more memorable than pretty work or illustrations that don’t say anything. It’s lucky for me that humour is my strength because if you’re making funny work, it’s easier to stay in favour and on people’s minds. 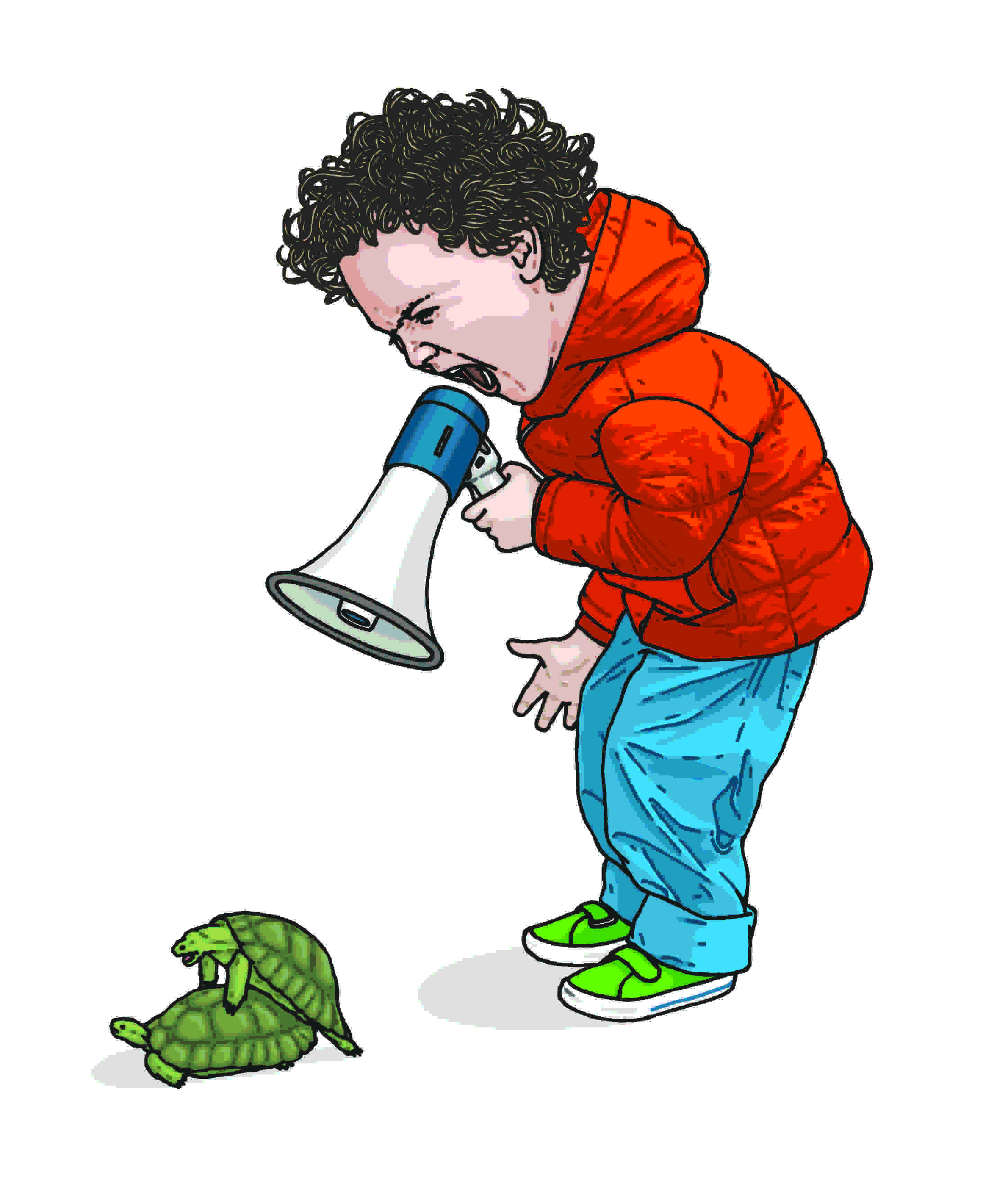 ‟You definitely have to be fairly thick-skinned and cynical in this industry; in the last four months I’ve been offered (and lost) over £150,000 worth of work, where for various reasons the jobs have just gone away! You can never get too excited when a great sounding job is in the pipeline. Saying that, I’ve also learned to say no to clients. In the early stages of an illustration career, you feel like you have to say yes to everything that comes your way. You say yes because you kind of feel grateful that someone is actually offering you money for this fun thing that you do, and you say yes because you’re afraid to say no. 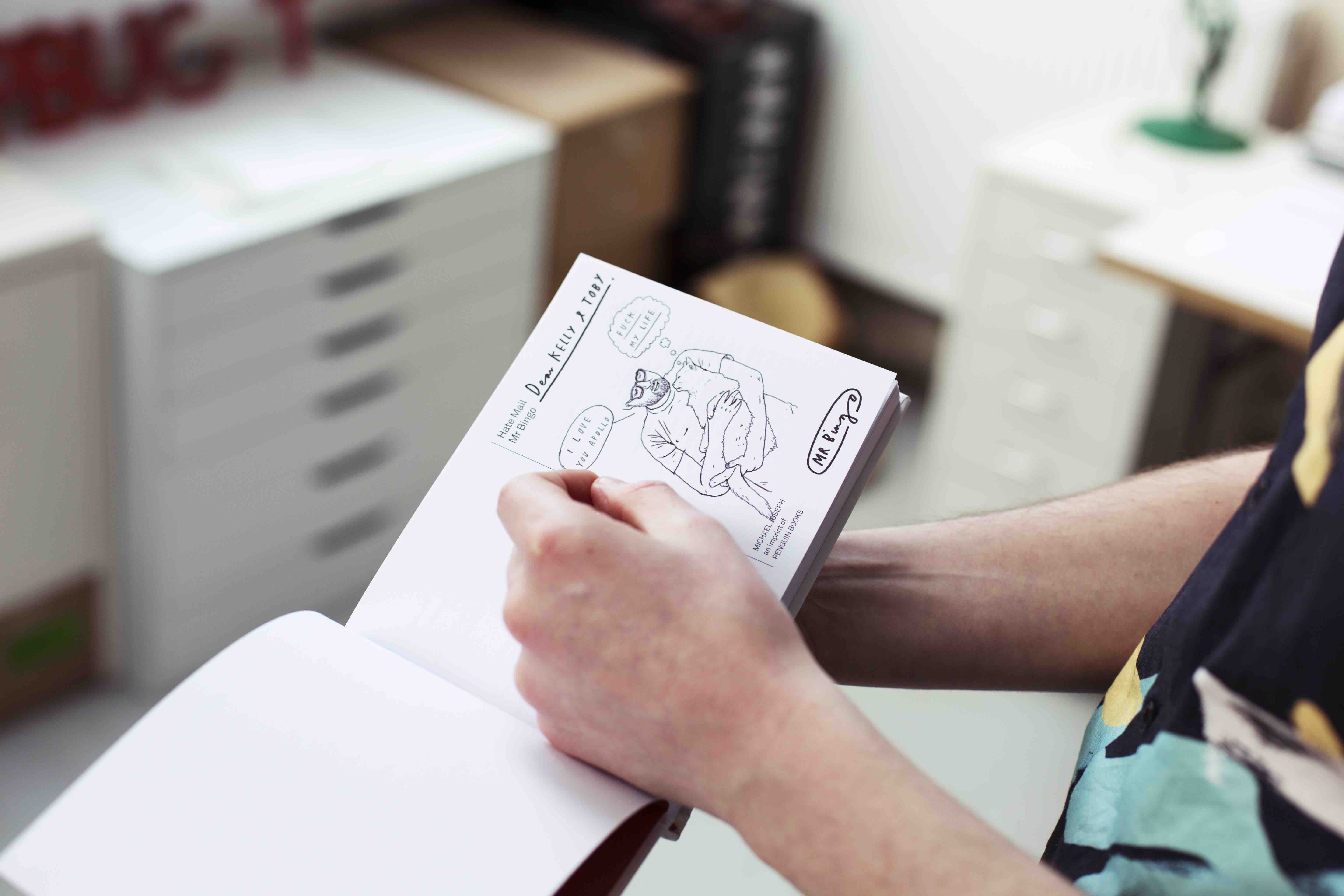 ‟You’ll learn what you’re good at, what you enjoy, how much you should be getting paid for something etc. And all of these things help inform your decision over whether to take on a job or not. Also, don’t expect instant success. This stuff takes time and you need patience and you also need to really want it. You can’t do something like illustration as a career in a half-hearted way. 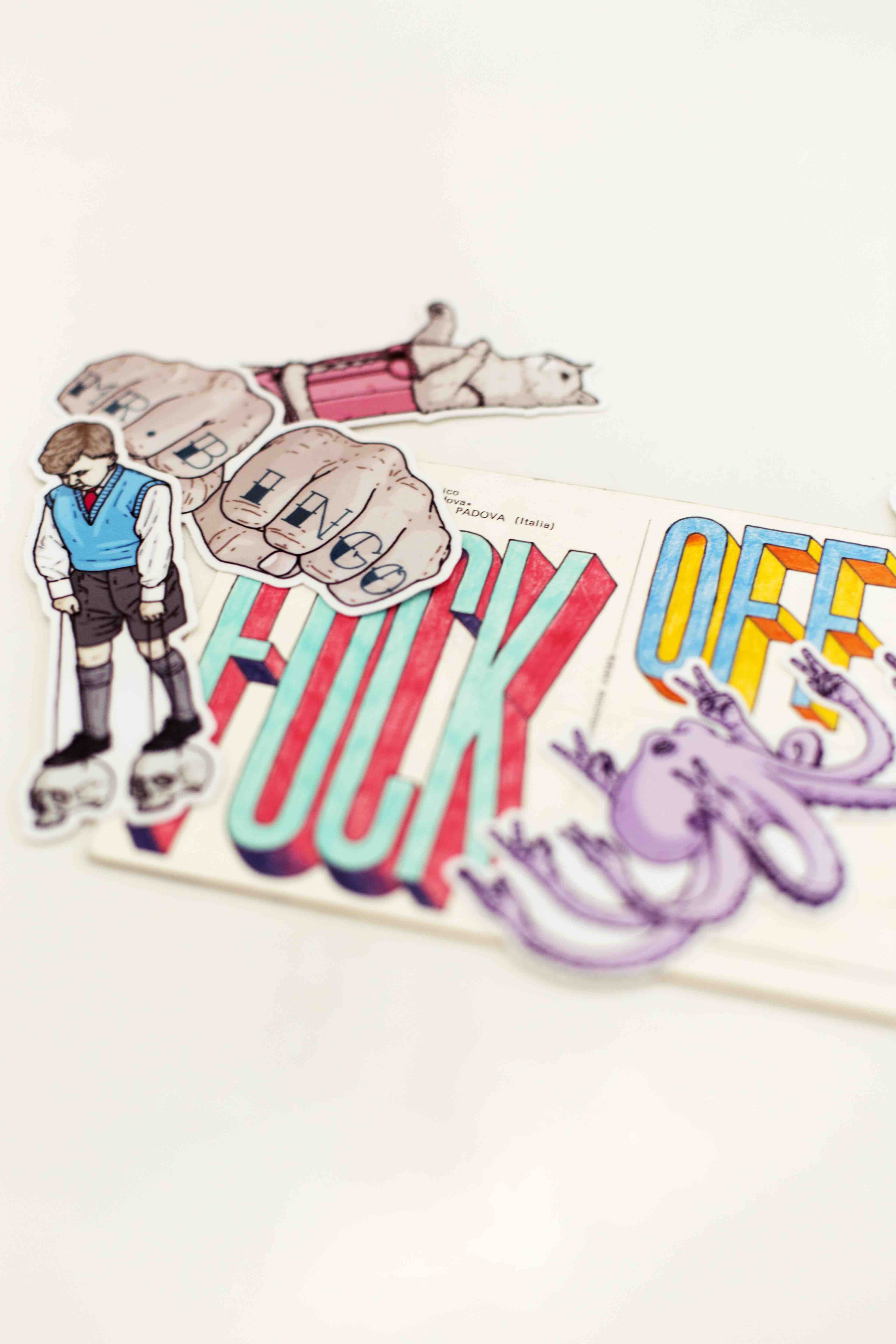 ‟When you’re a kid, you think adults are a different type of person, who are special and know exactly what they’re doing. They know the answers to everything, they can drive cars and fix things and they know how to deal with any situation because they are trained to do so. Then you become one and you realise that none of us know what we’re doing, we’re just roaming around on this big ball, floating in space, trying to make sense of everything. It doesn’t come easy but when it works, it’s one of the best ‘jobs’ in the world.”

Linkedin
RELATED ARTICLES
OTHER ARTICLES
The government’s brutal crackdown on NGOs has left victims of rape without anywhere to seek help. And now, as the country plays a key role is Russia’s war, things are only getting worse.
After rewriting the indie rulebook with her devastating songs about romantic longing, the singer-songwriter is now imagining a future in which the artist is no longer a product.
With the virus now a global health emergency, we must take steps to fight misinformation and demand a swift UK-wide vaccine roll out, writes Phil Samba.
A series of photos by the late Jerry Dantzic taken in 1957 show a tender side to the iconic Jazz musician.
The Conservative leadership contest has exposed an obvious truth: whether our next prime minister is a woman, or a British-Asian man, they will continue to fan the flames of division.
The author discusses her new memoir, which offers a sobering reflection on the racism and otherness she’s experienced along with a joyful celebration of her culinary heritage.