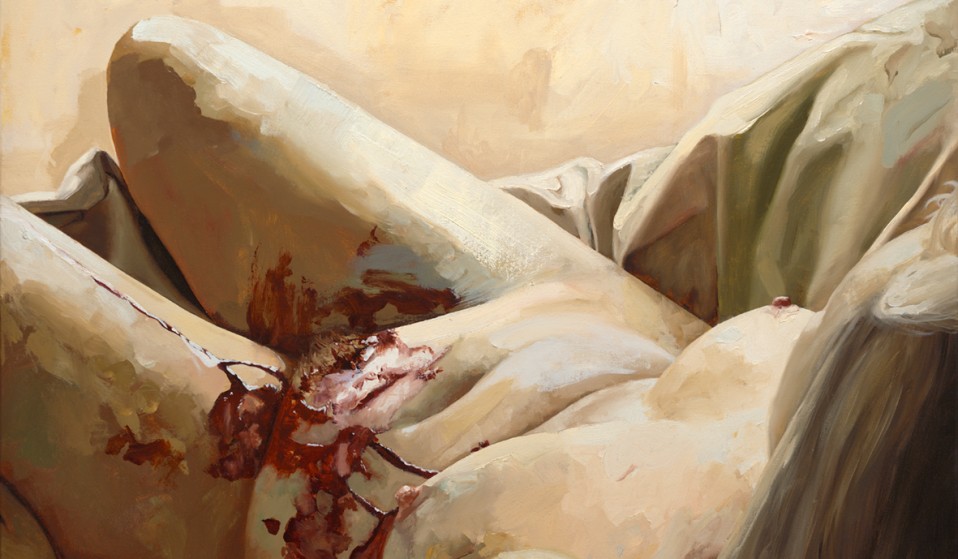 Ellie Kammer is tired of the lack of awareness about endometriosis, a life-changing and debilitating gynaecological condition that affects one in ten women.

Ellie Kammer is tired of the lack of awareness about endometriosis, a life-changing and debilitating gynaecological condition that affects one in ten women. So she decided to turn her suffering into art, in the hope it will get you speaking.

Ellie Kammer was 24 when she was diagnosed with endometriosis, a gynaecological condition that occurs when the tissue that normally grows inside the uterus grows instead outside of it, putting women in chronic, often excruciating pain that sometimes results in infertility. Still shockingly misdiagnosed and under-researched, this condition is estimated to affect one in ten women worldwide, and around 2 million women in the UK. Frustrated mostly by the lack of awareness, Kammer, an artist based in Adelaide, Australia, puts brush to canvas and makes spectacular paintings out of the condition.

How would you describe your experience of endometriosis for someone who has never heard of it?
It’s different for everybody. For me, the pain is always there, every minute of every day, which is limiting in that I have to make decisions that I never used to have to make and consider how long I will spend on things, like how long I’ll work, or whether I have the energy to make myself dinner. I have to really think about how I’m going to trade my energy for the day, whether I can actually work or I need to sit down and rest all day so I can work for the rest of the week.

It’s constant pain, and it affects my mind, how I handle situations, and how I talk to people. Sometimes I become a little impatient, or I just spend an entire conversation focusing on breathing through the pain.

How did the diagnosis change your life?
It completely shook my world. It happened in December 2015, after I had spent four months in Europe, and I’d actually had a miscarriage there. I had been in physical pain for years, so the diagnosis was both comforting and disturbing.

I had never heard of endometriosis before, and when I started researching it, the more I read, the scarier it became.

What had doctors been telling you about your pain, before you were diagnosed?
Sometimes they thought I just had really bad periods. But the biggest problem for me was that I was having urinary tract infection symptoms, so they kept prescribing me antibiotics – to the point that I developed an intolerance to antibiotics in my teens.

I went to several doctors about my pain and eventually it was through describing my symptoms to a friend who had endometriosis – and who had never told me about it –  that we realised what I had sounded really similar. So I took it to a doctor, investigated, had surgery, and eventually got diagnosed.

Did things get better for you afterwards?
Recovering from surgery was a pretty painful process, it took a long time to get back to normal. Pretty quickly, I started having the same symptoms again. The treatment is to go on a form of contraceptive, so I was on the pill, and then I was also encouraged to eliminate certain things from my diet, like bread, meat and diary, to manage the pain. I recently had another surgery that got rid of it, now it’s all gone and I actually feel amazing for the first time. But it does eventually grow back – there are a lot of myths around eliminating it, but it’s completely incurable. All you can do is treat it the best you can.

Why did you decide to turn this pain into art?
The experience I had adjusting to having the disease for rest of my life, and how isolating the misinformation out there is, inspired me to inform people through art. It’s the only way I know how to communicate.

You’ve said that the most frustrating thing of all is this lack of information. We all know that if men had this, there would be a load of research about it…
Yes, I have to agree with that. Being a gynaecological disease, it’s still unbelievably something people are uncomfortable talking about in 2017. It’s a “women’s disease”, you know. It also doesn’t help that symptoms are so variable and it’s so difficult to diagnose.

Who are the subjects of your artworks?
They are empowered women that I chose because they were opening to channelling my expression. I put a call-out on social media, and women all over the world contacted me wanting to tell me their stories. They really felt passionate about what I was doing and wanted to help me. So it’s not so much about me anymore, it’s about the bigger picture. I’m going to make a few more paintings for my exhibition in July, and then I might explore different facets of the disease.

What do you ultimately hope to accomplish with the paintings?
I hope they inspire people to speak, and to create a community where there’s a safe space to speak about it. And also, to touch people who don’t know about endometriosis and inform them so they know how to deal with someone in their lives who has it. I found that so difficult when I went through it. I already feel like I’m making a difference because people are talking to me openly about it. If everybody who suffers it becomes a little more comfortable speaking about it, that’s how we make change happen.

Find out more about Ellie Kammer’s art. Her solo exhibition will open at Adelaide’s Light Square Gallery on 6 July 2017.

Linkedin
RELATED ARTICLES
OTHER ARTICLES
Photographer Robin Graubard’s debut book offers an unflinching record of turbulence and change across the Balkans.
Following the release of his newly republished 1991 book, Redheads, the American photographer reflects on his celebration of ginger people and their magnetic power.
In the last of our dispatches from OFFF Barcelona, Rufus Deuchler and Vincent Gault discuss the future of creative process.
The failure to hold landlords to account is denying tenants their basic dignity, writes Bella Saltiel.
The situation in Afghanistan remains dire, with many groups facing persecution at the hands of the Taliban.
The author discusses her blistering new novel about history, revolution and queer love.