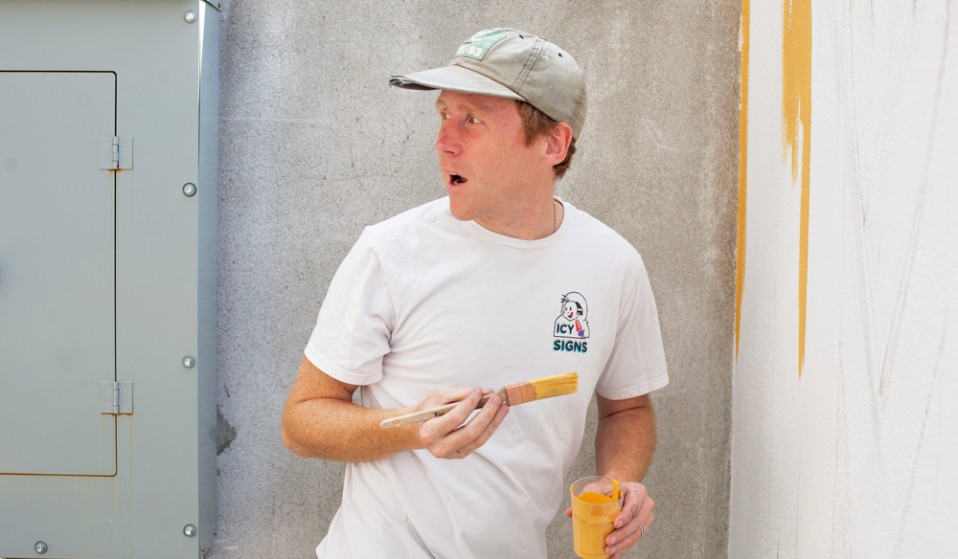 “If you really think you are punk or DIY, you can’t just sit around and think you know it. You’ve got to put it to the test every day.”

“If you really think you are punk or DIY, you can’t just sit around and think you know it. You’ve got to put it to the test every day.”

Dan Murphy is a sucker for junk.

The self-taught, Philadelphia-based artist, photographer, curator and publisher takes a special interest in things other people throw away.
Take his most recent creations; colourful twisted heaps of cultural ephemera – like cycling shoes, empty coffee cups, baseball cards and utility gloves – placed together for a group show, Department of Neighborhood Services, with Barry McGee and Isaac Tin Wei Lin at the Fleisher Ollman gallery.
Or look at Megawords – the experimental media project he founded with artist Anthony Smyrski in 2005 that brings art from the fringes into focus through a biannual photography magazine and ad hoc exhibitions.

Whatever his outlet, Dan seeks to celebrate the overlooked. Scrap bikes, burnt-out bums, discarded mannequins, fading graffiti and derelict demolitions are just some of the recurring motifs that run through his wayward world. Whether he’s shooting or collecting photography for the magazine – which has featured subculture documentarian Angela Boatwright and Magnum-nominated photographer Zoe Strauss – or intervening in public space – converting an abandoned newsstand into an active kiosk, opening a pop-up art space in rundown Chinatown, organising free film screenings in abandoned lots – Dan Murphy seeks to turn the ordinary into the extraordinary.

In the spirit of collaborative conversation, essential to Megawords’ egalitarian approach, we invited Anthony to interview Dan about the roots of his obsession with independence.

Anthony: How would you describe the art scene here in Philadelphia?
Dan: Philly is one of the biggest cities as far as DIY. It provides a lot of opportunities for a scene to exist because it’s affordable. It’s as big as it could get without being commercial. Cultural spaces, events and happenings are put on by individuals or small groups as opposed to companies or institutions. It’s a not-for-profit thing. No one is expecting to get paid out of it. It’s self-governed and self-motivated. I’m just a participant. I’m here, I do my thing. I don’t see myself as a pillar of the scene or an elder. I’m not interested in that or in taking any ownership of it. I’m just happy to participate and do things for the same reasons I did in the past.

How did your youth shape the way you do things now?
Skateboarding and graffiti and zine-making. All of those things fit into the DIY ethic. Skateboarders improvise and writers improvise. They don’t wait for other people to tell them to start or stop, or to join the team or pay the fee to be involved. It’s not about being on time or anything like that. But at the same time, to be DIY you have to have a lot of your own willpower to want to participate.

That’s always been really interesting to me. People can criticise DIY as a slacker thing, but people who create things off their own back have a lot of motivation and creativity – they really believe in what they do. Artists are not slackers.
Yeah, for people who work in high-stress corporate stuff, their job description is in front of them every day. As an artist or an improvisor, either as a job or a hobby, you don’t have that. If you play hockey, you go to hockey practice. If you skateboard, you run from the cops, skate stuff, learn how to use public transit. You have to constantly improvise.

I always go back to an example from a conversation I had with a guy from the Rec Department about these skaters who wanted to build a skatepark. They said they would get the money and materials and make it themselves, all they wanted was permission. The official commented on how crazy it was and said that no basketball player would come in and offer to build their own basketball court. No soccer player would build a soccer field. But give a skateboarder a little bit of land and they’ll turn it into the best place ever.

Music is also always important. I watched all of these scenes develop with the same spirit and lack of official support and they’ve all thrived.

How do you keep that same spirit as an adult? I often feel pressure or criticism that I might not be DIY enough any longer. How do you reconcile getting older and realising that DIY in some ways is an ideal?
I think you have to evolve. You can’t just think DIY or punk is one specific thing and you’re going to do it one way for the rest of your life. That’s just a stubborn attitude. I don’t care, I don’t need to be a punk or a skater or anything. I don’t need any title. It’s about constantly evolving and bringing with you a confidence and self-reliance. You have to trust yourself and know that you can do things, like fixing up a house or whatever on your own. If you really think you are punk or DIY, you can’t just sit around and think you know it. You’ve got to put it to the test every day.

Right! Your philosophy has to go out and ram up against the rest of the world.
And you have to change it when you need to!

How about Ed Templeton? The Beautiful Losers, Alleged [Aaron Rose’s gallery, where they showed] etc. Why do you think this world is so productive?
For the same reasons. If you let skateboarders and graffiti writers into the art world they are going to take over. They are so resourceful and they aren’t waiting for anyone’s approval. So many graffiti writers were able to step into the art world because they weren’t physically or mentally scared of anyone else. They’ve already been through so much shit. I don’t mean in a snotty way – they just aren’t waiting for approval.

Has that community supported you personally?
Definitely. Directly of course with Megawords, but in a bigger sense they created an art scene that didn’t exist before, that I’m now a part of. It’s a whole other part of the art world. People like Steve Powers and Ed Templeton pushed the door open and made the template for what we are doing now. There were things going on before in hot rod art and surf art, and SF Grateful Dead poster art. But it was still fringe.

Find out more at Megawords.

Linkedin
RELATED ARTICLES
OTHER ARTICLES
“Route 9 may well have sparked my fascination with opposite ends of the spectrum.”
“I just ate hot shit. I bombed so hard. And then I kept bombing for three years.”
Pioneering street shredder and impressionist painter Brian Lotti is switching up the way we see skate.