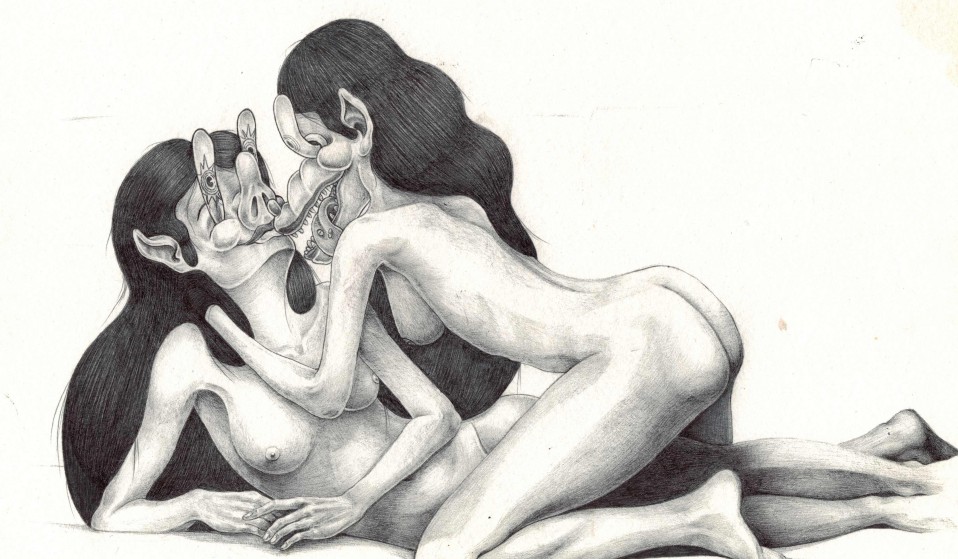 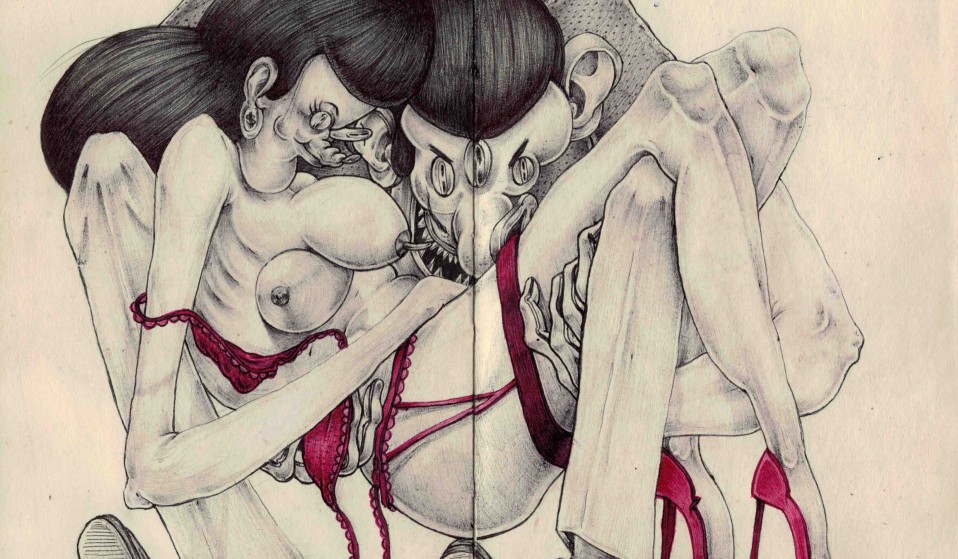 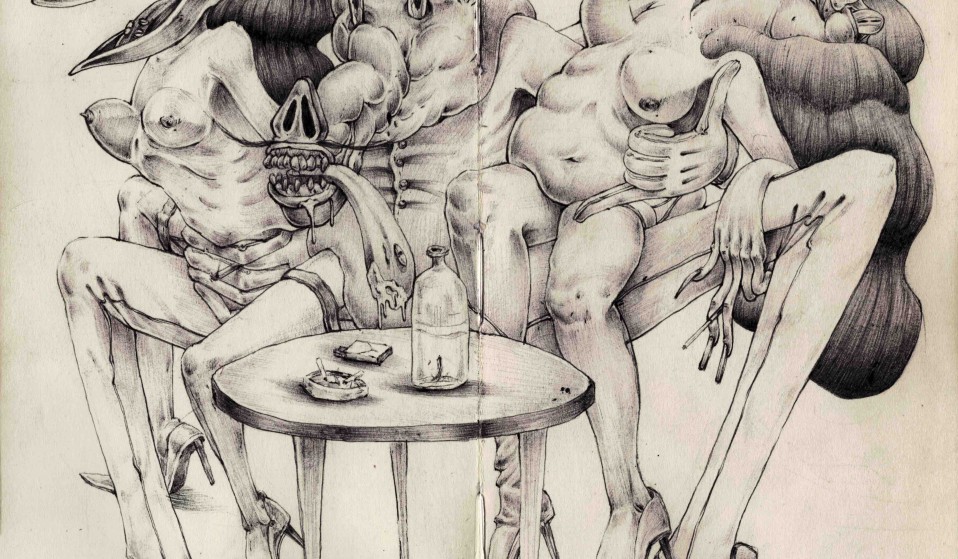 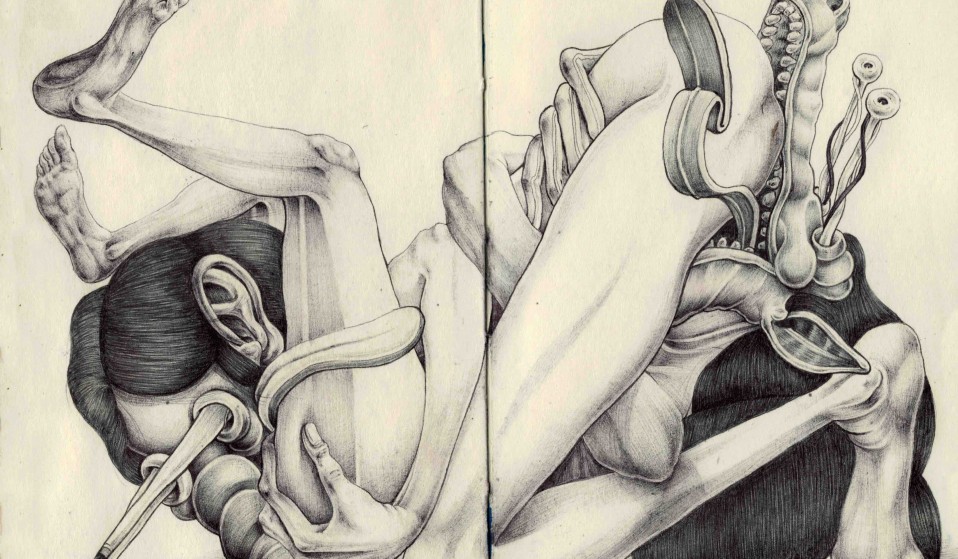 Artist Mario Maplé’s discomforting biro illustrations caricature our dirtiest desires. We reached out to ask what gets his blood pumping - artistically, that is.

“Hidden in the darkness of a motel room, a club or our own bedrooms, we are transformed into animalistic, cartoonish characters which are often grotesque and bizarre,” explains artist Mario Maplé.

Mario’s Canícula series (which means heatwave or midday sun in Spanish) explores sexuality, eroticism and how humans crave pleasure and desire: the urges that make us do bad things in dark places.

He twists his outlandish and misshapen characters to play out decadent, amorous scenes that are as strange and surreal as they are beautiful – all executed in flawless ballpoint pen. 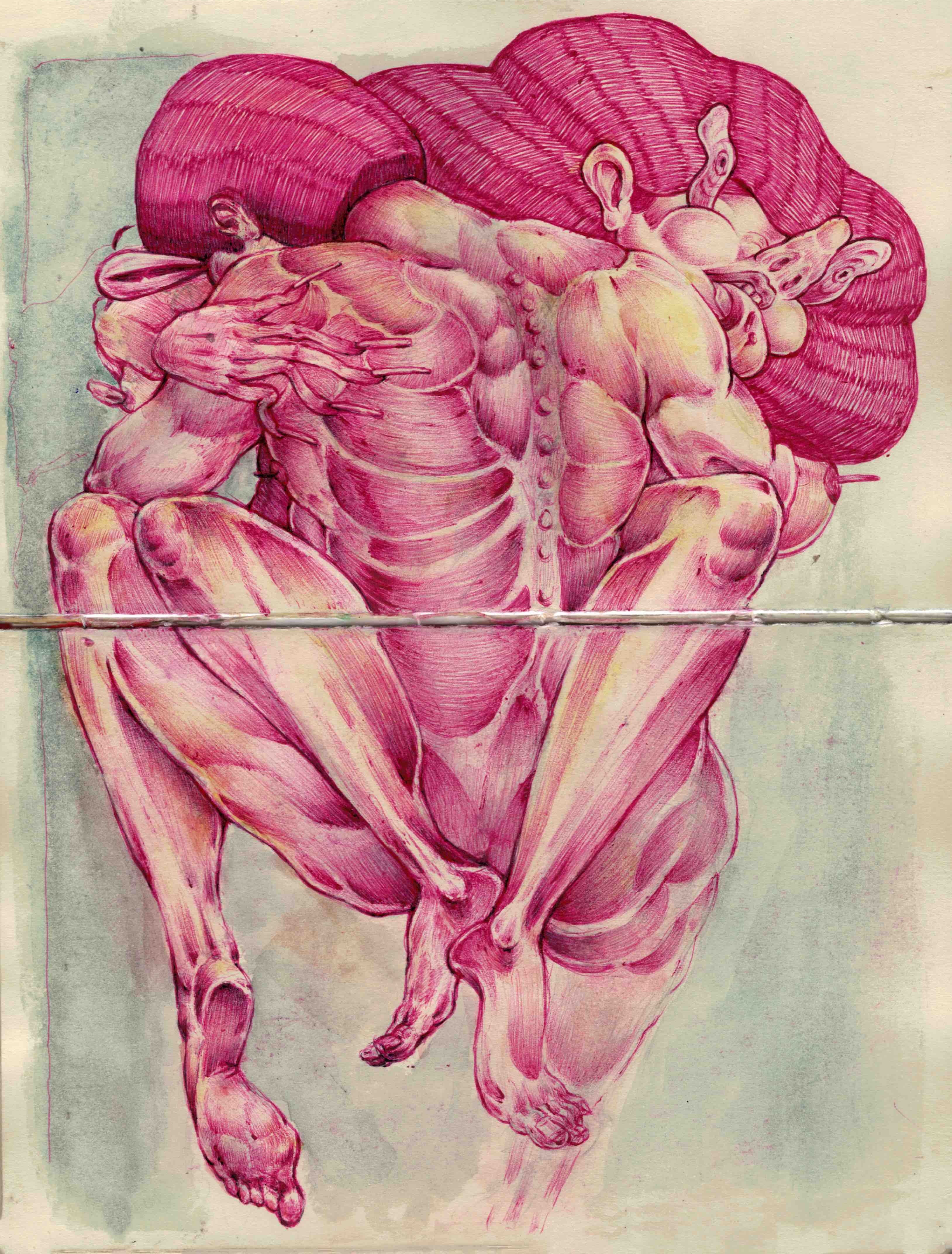 Now 23 and from Guadalajara in México, Mario’s art career started out so innocently: as a child he began drawing characters from Cartoon Network, The Simpsons and skateboard mags like Thrasher. “My brother was the one with the skateboard talent,” he explains. “I was more into the board graphics of and the stickers that came with each of issue of the magazines.”

Exchanging his notebooks for the walls of Guadalajara, he began to paint more ambitious and challenging work in the street. “There it was capable of being contemplated or ignored – but also erased, which happens a lot because my work tends to be a little bit aggressive, grotesque, visually violent and so on,” he explains. 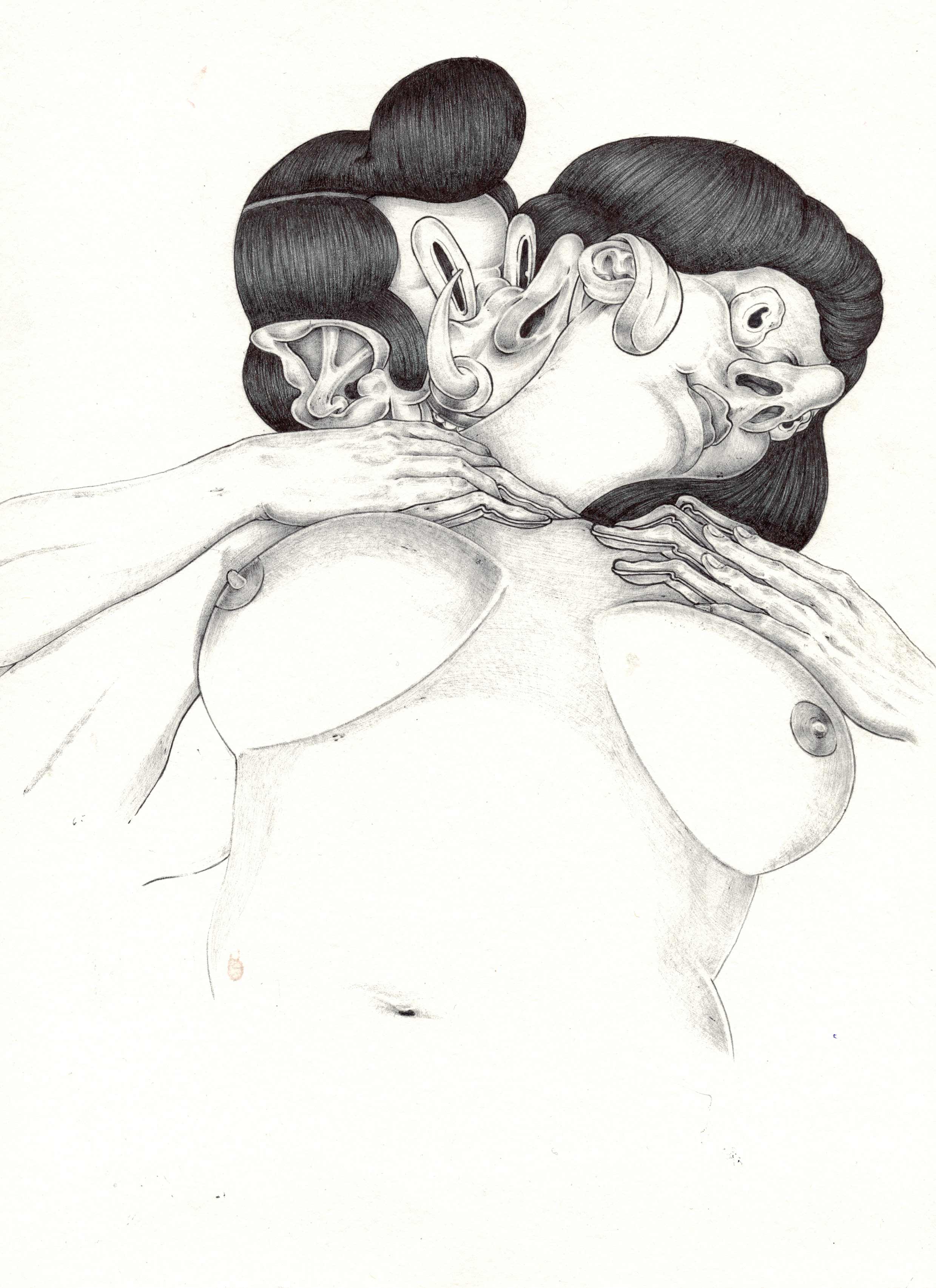 We got in touch to find out his biggest influences and inspirations.

Like every little kid I loved cartoons – but that fascination never went away with age and the social pressures that come along with it. My friends always tried to make fun of me when they caught me watching Looney Tunes instead of a football match. But I’ve always been fascinated by animation, character making and the satirical and exaggerated humour of old cartoon shows. It’s like they’re always making fun of human nature and our flaws, which makes them a delicious thing to watch and think about. The first cartoon makers that I came to recognise, visually speaking, and the ones I still love to watch are the ones that everybody grew up with: Chuck Jones, Bob Clampett, Friz Freleng, among others.

Since I grew up watching cartoons, I discovered weird stuff sooner rather than later. I remember the first cartoon that left me with a sense between discomfort, visual pleasure, laughter and nausea was Ren & Stimpy. I remember it was a shock for me, since I was only seven years old when I first discovered it. My older brother and I were zapping through the TV channels and we saw a semi-realistic cartoon of a dog with rheum eye, dental cavities and stinky breath. As a seven-eight year old kid, I was instantly hooked by that unknown weird paradise which explores the space between visual discomfort, acid humour and senseless themes. Later on, I rediscovered Kricfalusi’s genius, social criticism and his amazing influence in today’s cartoon world. 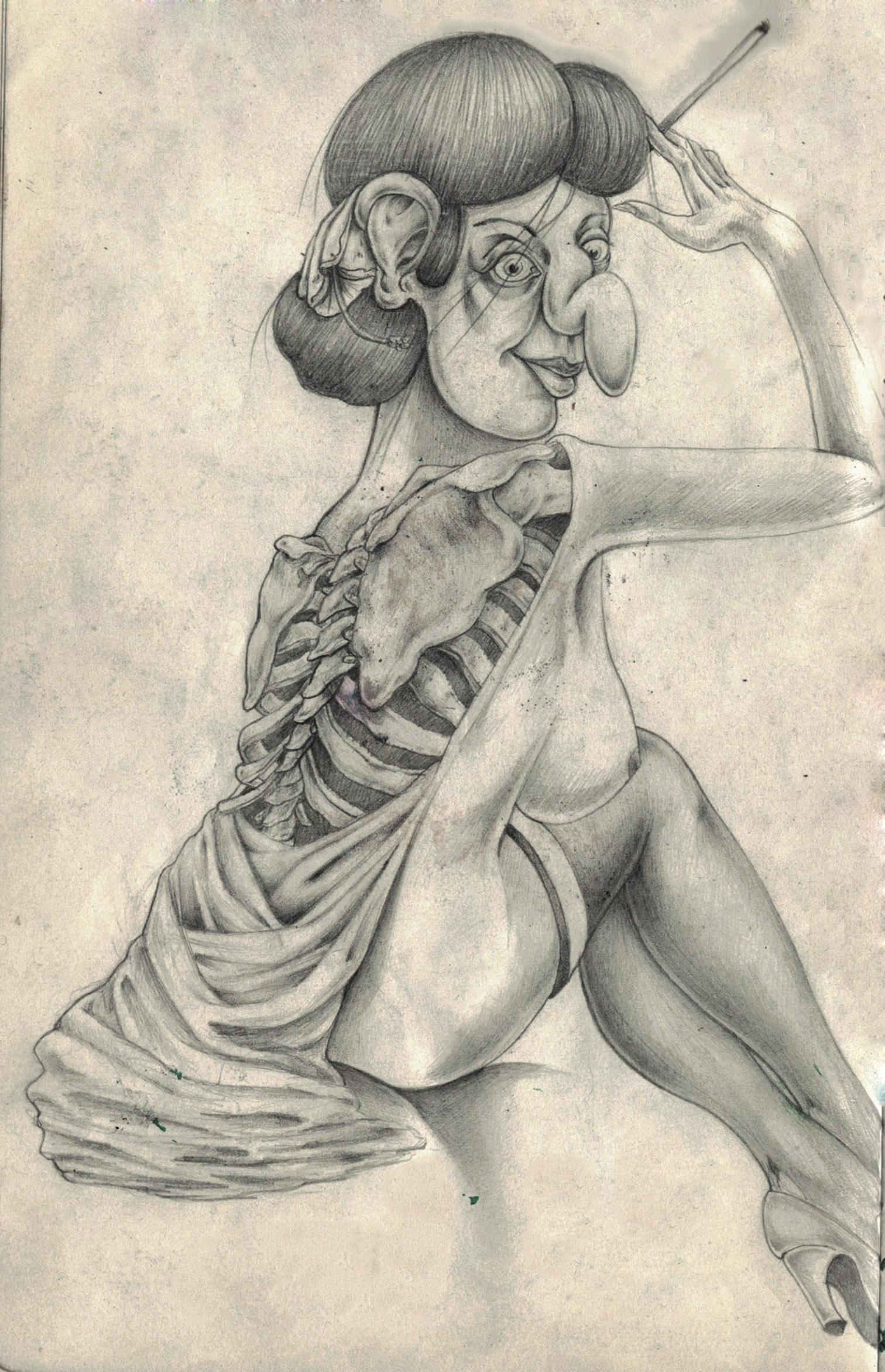 As a Mexican, we make fun of everything. I find acid/dark humour fascinating as it seems that everything can be a joke, you can laugh at every single thing. There are no limitations, you can laugh at death, sickness, failure, tragedy and everything. I personally think that more than a lack of respect, it’s a way of finding a little light in the dark. Instead of letting oneself feel devastated, you decide to make a little joke, even though it’s hard. That search for a laugh is one of the most important things for me, since it keeps me going even when I feel like there’s no lower point I could reach. I always find a way to laugh by just making fun of myself; in México that’s part of our culture. 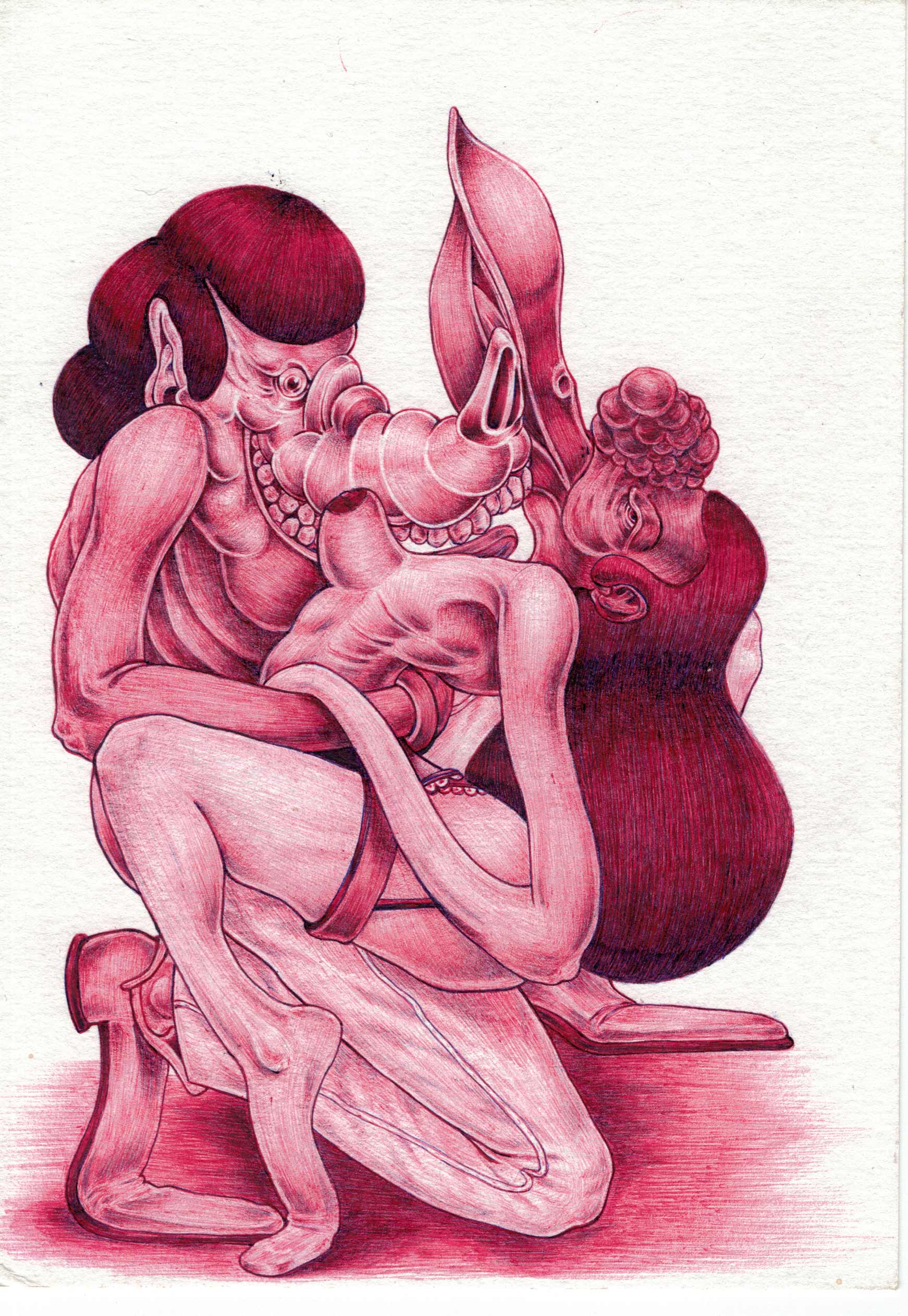 Even though I’m a visual artist, I find dance one of my main inspirations in life. I like to dance while doing almost everything and I used to do breakdance and poppin’. I had a girlfriend that did ballet and contemporary dance, who introduced me to that part of movement and bodily expression. I still find myself spending hours on the web watching short pieces of contemporary, modern and breakdance and the hybrids that they produce. While watching videos, I tend to write down the times where I see movements that intrigue me. Later on I go and sketch them out, to study technical elements and abnormal anatomical postures, which you can appreciate even better on a body paused in the middle of a movement. One of the most impressive dance presentations I’ve seen was in Barcelona, with Última Vez/ Wim Vandekeybus at the Mercat de les Flors. 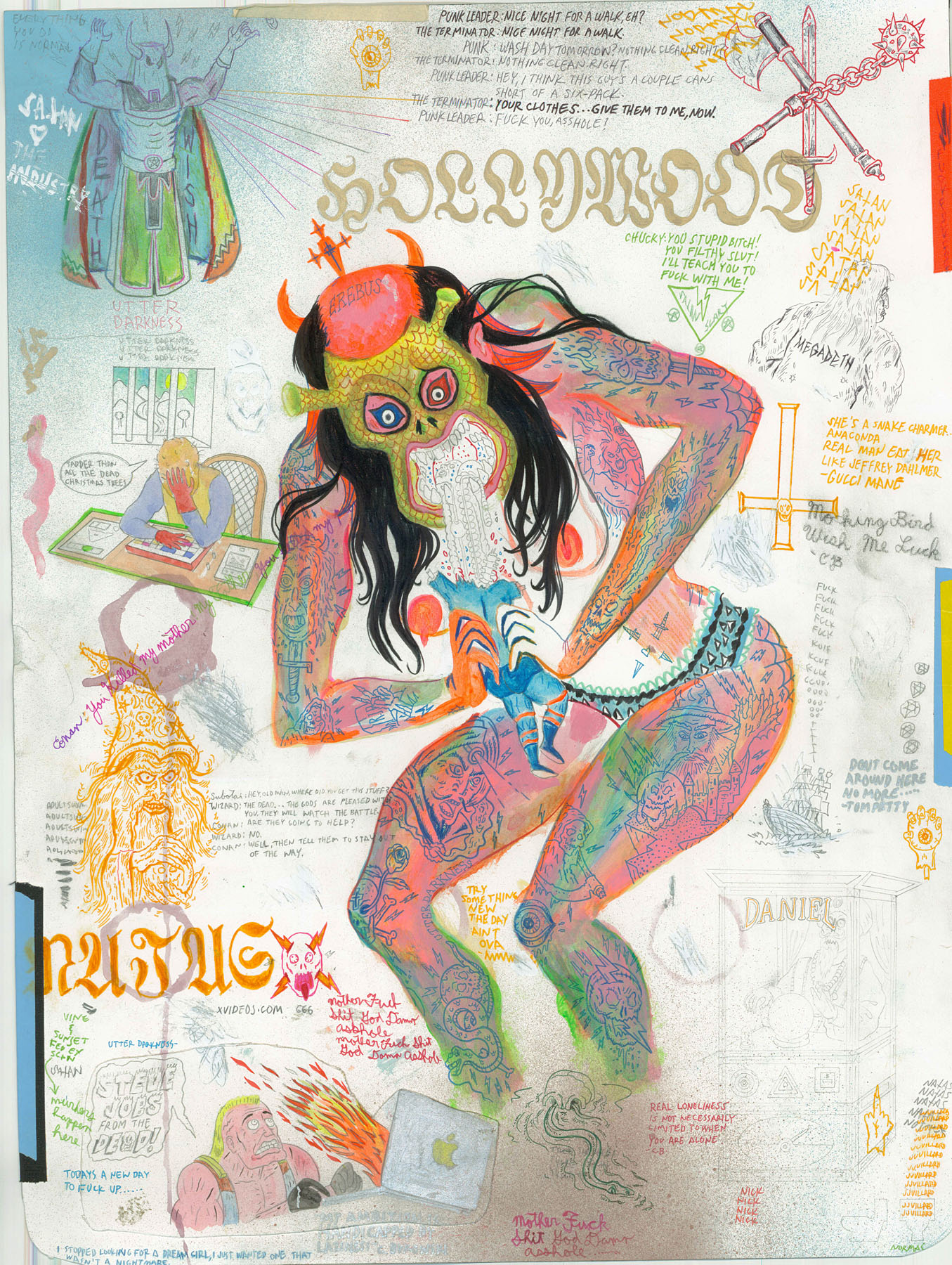 In my personal practice, sketching is one of the most important parts. For me, sketching is getting the ideas down in the most instinctual and natural way possible. Usually when you sketch, you get an idea and you write, draw, describe, paste it or whatever.

Later on, you can go and put some more visual and deeper concepts on them so you make it “better”. But for me, the sketch is a final piece of work in its own right – complete with its “failures”. Finding the imperfection and embracing it as a part of every process is a lesson that translates to every other part of life.

One of the things I enjoy most is looking at other artists’ sketchbooks. It’s like seeing directly into their minds. You can see that they also hide some stuff, and sometimes the part they left aside from the final piece is the most interesting part for others.

I really dig into the sketchbooks of James Jean, David Choe, JJ Villard, Apolo Cacho, Jesús Benitez, Smithe, and basically any sketchbook that I can get my eyes into.

Check out more of Mario’s work on Tumblr or on Instagram.

Linkedin
RELATED ARTICLES
OTHER ARTICLES
Sean Maung’s photos are a love letter to the Black and brown communities that make up New York.
By turning a real-life crisis into daytime television fodder, TV bosses have once again shown themselves to be completely out of touch with audiences.
With skyrocketing rents, packed out viewings, bidding wars and more, renting in London has never been harder.
Rhiannon Adam spent three months capturing an ageing society wracked by division, isolation, and the aftermath of scandal.
For over a decade, gamblers have won big by employing people to place live bets from the court. But does this dubious method still work?
The idea that a younger generation is abandoning work has become a popular narrative online, but it doesn’t necessarily reflect reality.