Art & Culture / Art / Made In America: The artist taking action on the right to bear arms 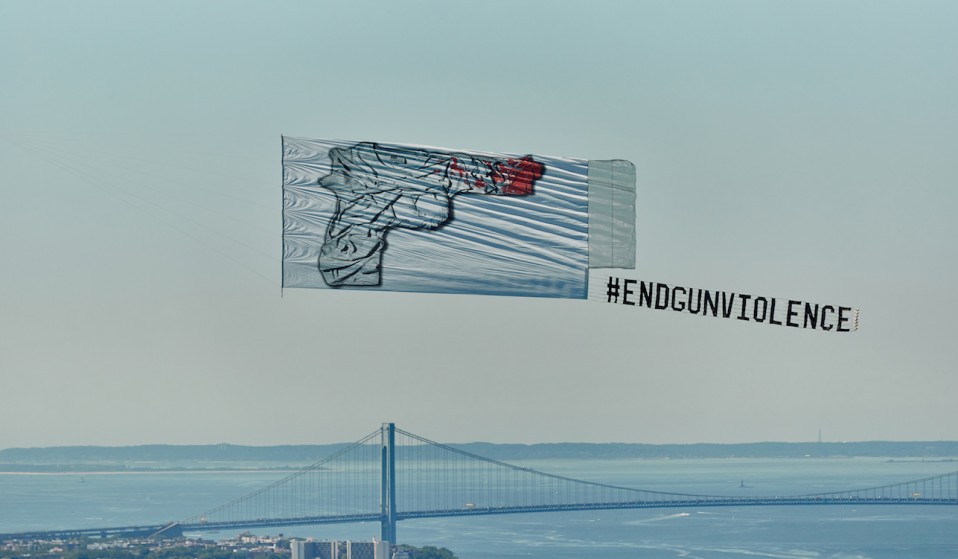 Inspiring change, one 3,000 square foot banner at a time.

When Australian-born artist CJ Hendry flew a 3,000 sq. ft. banner depicting a t-shirt twisted into the shape of a gun above a handful of U.S. cities - she did so as an act of protest. It's time to face facts, there's a crisis with gun control in the United States of America, and Hendry won't stop until the law is reformed.

The American love affair with guns, both long and tragic, has been playing out for centuries, ever since the right to bear arms was enshrined into the U.S. constitution in 1791. News stories telling of grisly shootings in America come thick and fast. Before we even had time to mourn those lost in the deadly shooting in Orlando – the largest mass shooting by a single gunman in U.S. history – five police officers had been shot dead in Dallas. It just goes on.

“After Dallas, I just felt like, ‘Oh for fuck sake'”, the Australian artist CJ Hendry tells me, clearly angered by the spate of shootings that have recently taken place across America.

CJ is an artist making a case for the ability of art to prompt people to rethink gun possession in the U.S. In response to the mass shooting in Orlando, in which 49 people were killed and 53 wounded, CJ set to work designing a 3,000 square foot banner depicting a t-shirt twisted into the shape of gun which was flown above New York, Orlando, and Chicago. The banner was flown by an aeroplane above three cities, which are all beset by gun crime. Take Chicago, a city that’s had 349 homicides in 2016 already, and counting. 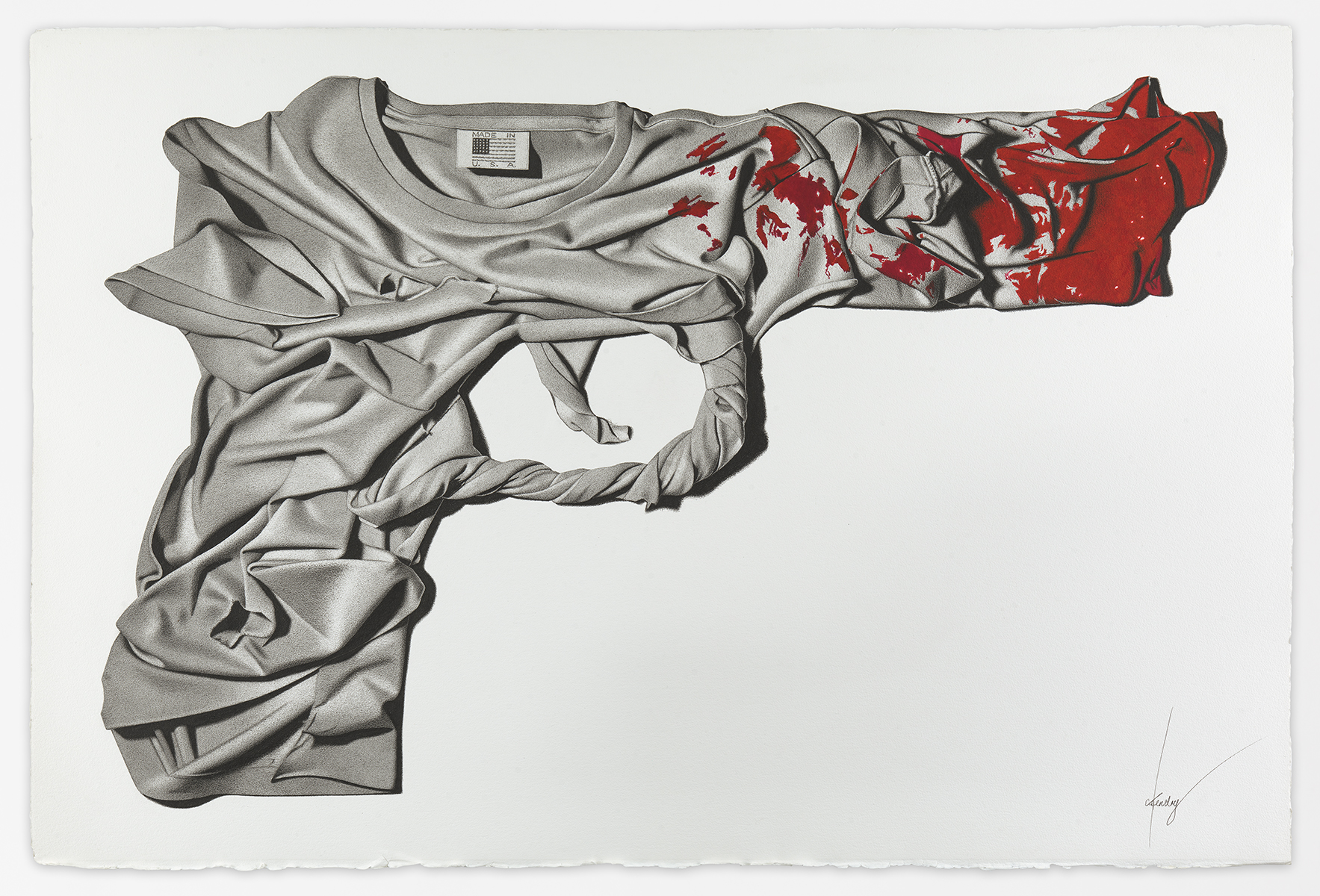 Despite the fact that the Orlando shootings were aimed at the LGBT community, and that the events in Dallas have been reported as a response to the disproportionate number of young black men shot dead every year by U.S. police, CJ wanted to find a universal symbol to put on her banner, something that could unify all those who’ve suffered or are angered by gun crime.

“It’s so simple, t-shirts represent everyone. It doesn’t matter about your race, your religion, you age, your sex, t-shirts are a common denominative for every type of person.” CJ’s hyper-real drawing of the pistol shaped t-shirt is bloodied at the muzzle and features ‘Made in America‘ written on the shirt’s label. Not only does this highlight how gun control is a very American problem, it’s a nod to the reality that despite the rhetoric, it’s Americans killing Americans with guns that is the true crisis facing the U.S. in 2016. 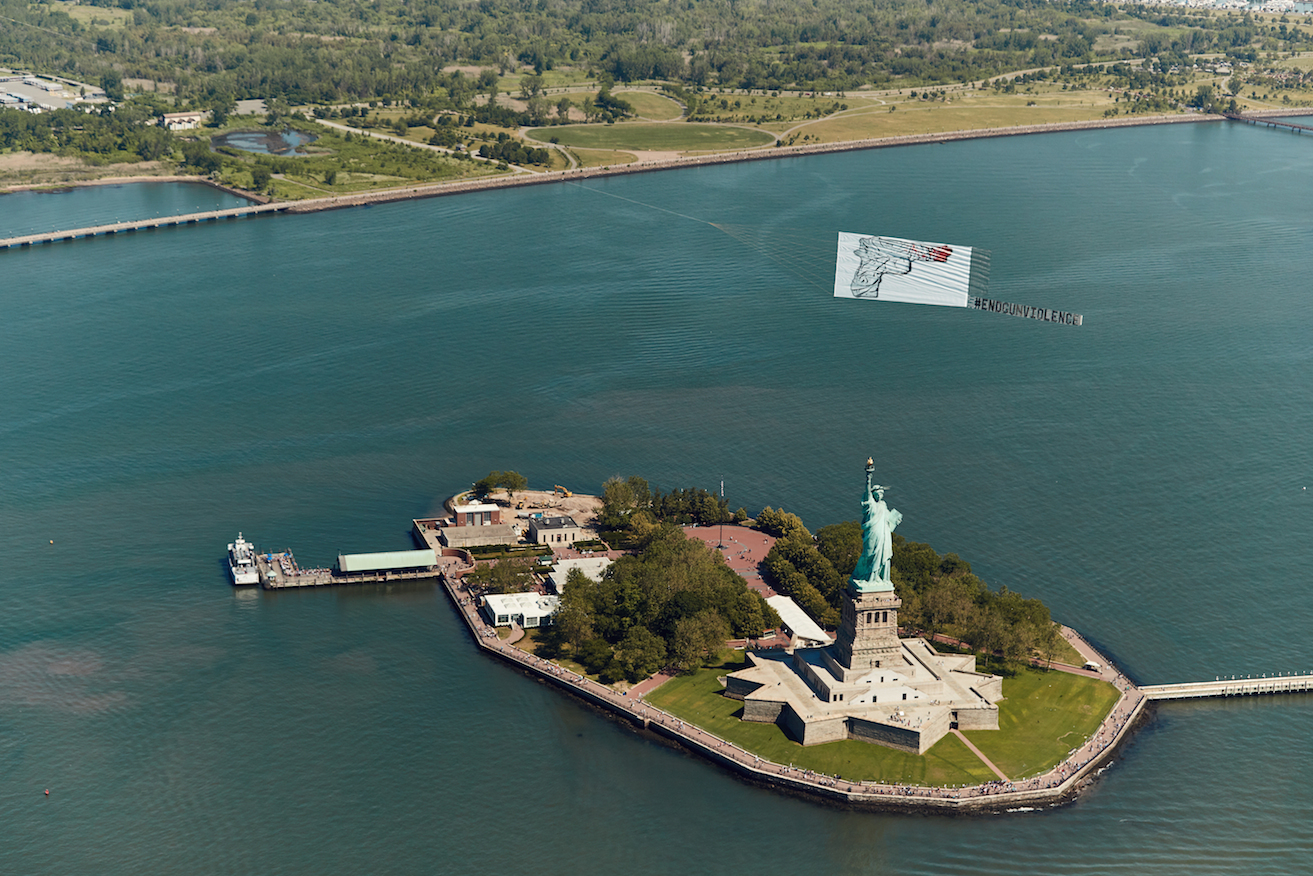 Her experiences of tight gun control laws in Australia have informed CJ’s desire to produce art that she hoped will motivate American gun-owners to divorce themselves from their love and need for weapons. “Our gun laws [in Australia] are so strict and stringent that it’s not even a debate”, CJ frustratedly tells me. “We don’t have mass shootings. We don’t have to worry about it at all. And then you come to America, and it’s just ridiculous. Ridiculous is the only word, although that’s insensitive … but to hear about it so much on the news telling stories of shootings here, there, and everywhere, it’s just baffling to me because America can change that.”

Perhaps CJ is exactly what America needs right now; someone who can speak from personal experience about how effective gun reform can be. Unsurprisingly, her artistic protest has been met with some resistance. “I have had opposition from individuals who say ‘well if you’re Australian and your gun laws are so great, go back to Australia,’” which goes to show just a fraction of how powerful and vocal pro-gun lobbyists are.

Can America ever follow the example set by John Howard in Australia? Sadly, the tightening of gun possession in the U.S. may remain a distant dream when pro-gun culture is so deeply ingrained within the establishment. Indeed, it might seem obvious to many, but it is worth remembering quite how much this is the case. “The NRA are so wealthy, and they control so much of the Senate and so many other things that I don’t even know about” she sighs. “This is something that is going to take a long time to pass in this country.” In 2015, for example, it was reported that the NRA gave 9 senators over $22 million to vote down gun laws.

The political climate in America at the moment may also not currently be suited to discussing gun-law reform with the presidential elections nearing and the openly pro-gun candidate Donald Trump has a chance of becoming president.

In light of this, there is the danger that the  question of whether or not there will be a tightening on the possession of guns will be co-opted for political gain, rather than for the purposes of reforming legislation: “In this super-competitive ‘Trump versus Hilary Clinton’ situation, it becomes more of a political tool rather than something that needs to be changed immediately. There’s too much money being injected into the wrong hands to make the changes that are needed.”

Until America wakes up and finally begins to retract the right to bear arms many more people will be killed. Time is ticking until the next shooting breaks the news. CJ, and people like her, will continue to protest, and they need to. “I’ve got a very small voice in comparison to this whole country so I’m just doing my part” suggests CJ. “But me along with millions of other people trying to do something to inspire change helps the situation.”

Linkedin
RELATED ARTICLES
OTHER ARTICLES
A sharp increase in officers armed with the electrical weapon is resulting in serious injuries and deaths.
With the virus now a global health emergency, we must take steps to fight misinformation and demand a swift UK-wide vaccine roll out, writes Phil Samba.
The author discusses her new memoir, which offers a sobering reflection on the racism and otherness she’s experienced along with a joyful celebration of her culinary heritage.
The government’s brutal crackdown on NGOs has left victims of rape without anywhere to seek help. And now, as the country plays a key role is Russia’s war, things are only getting worse.
Yesterday, rail workers came together to protest poor pay, working conditions and job cuts in their latest round of strikes.
A series of photos by the late Jerry Dantzic taken in 1957 show a tender side to the iconic Jazz musician.