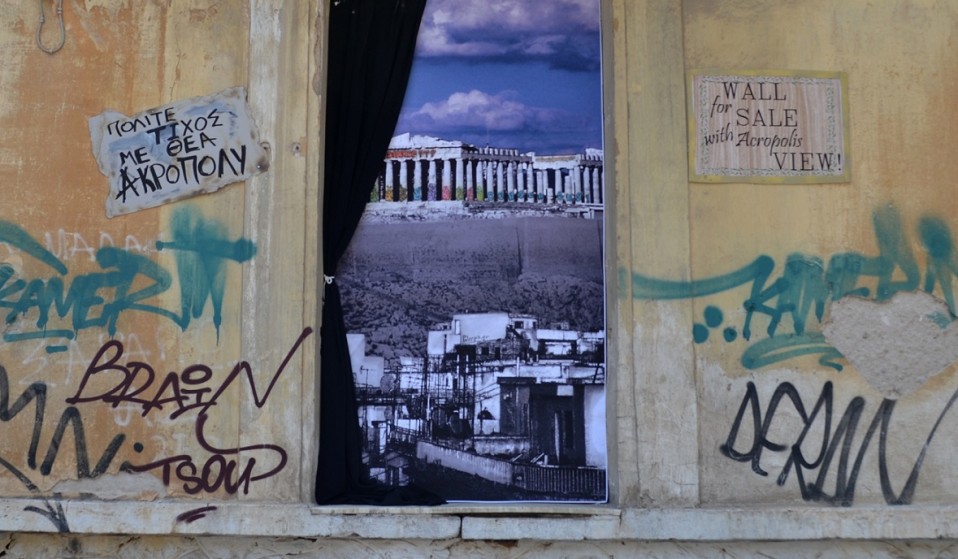 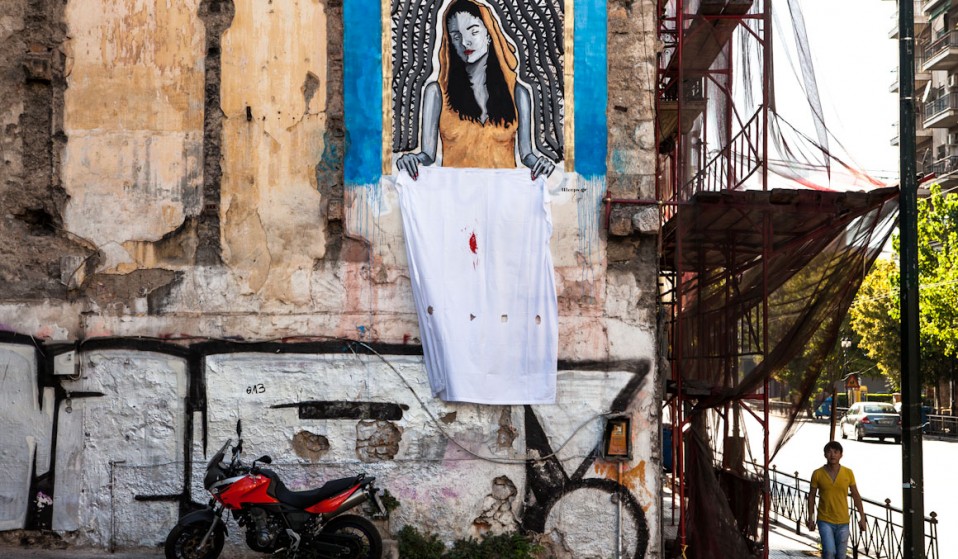 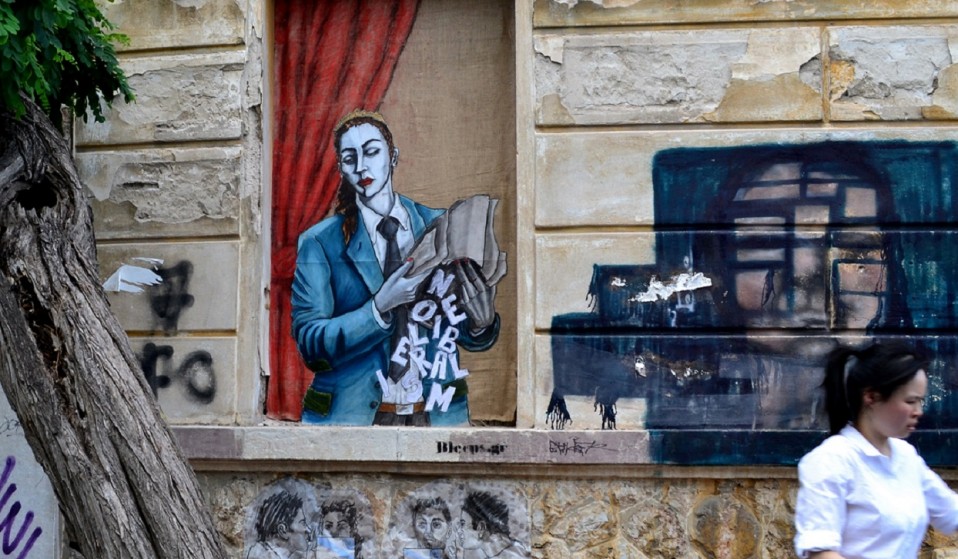 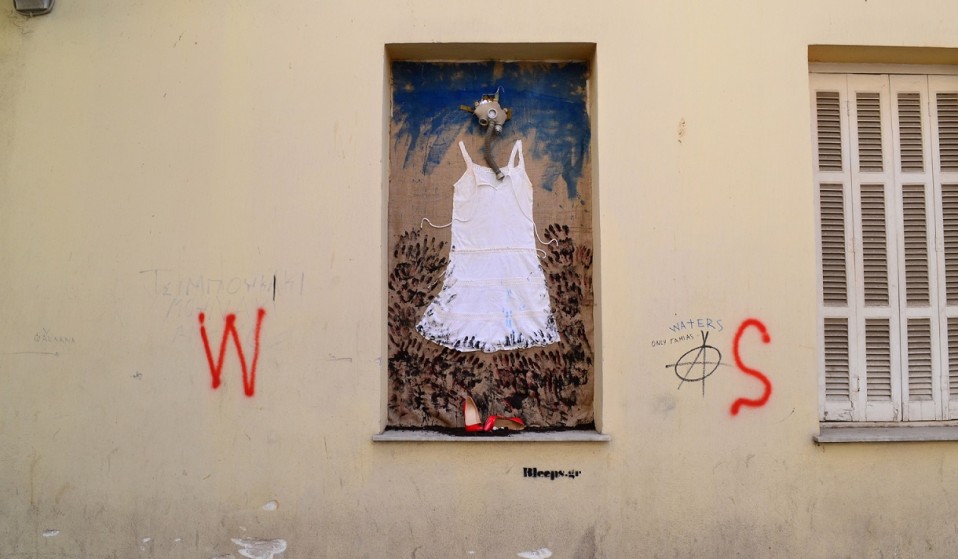 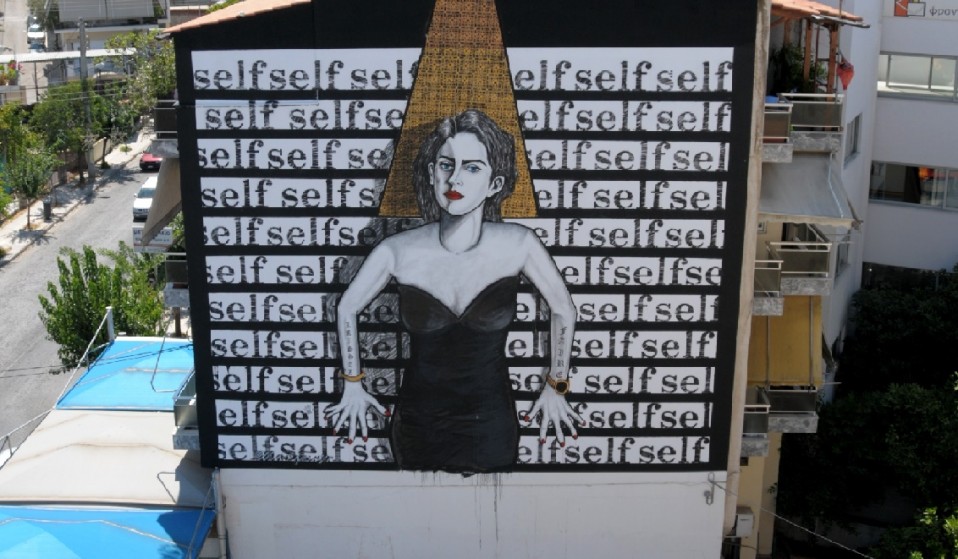 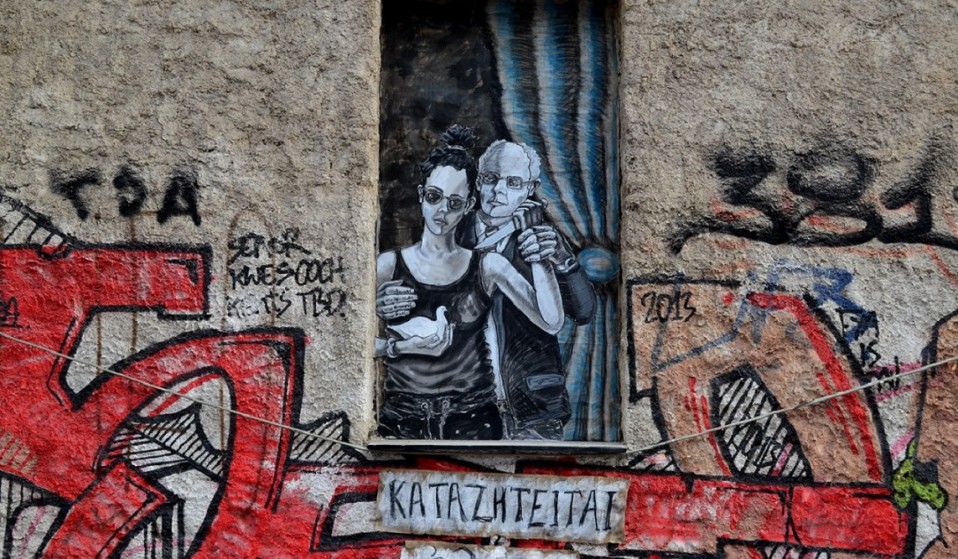 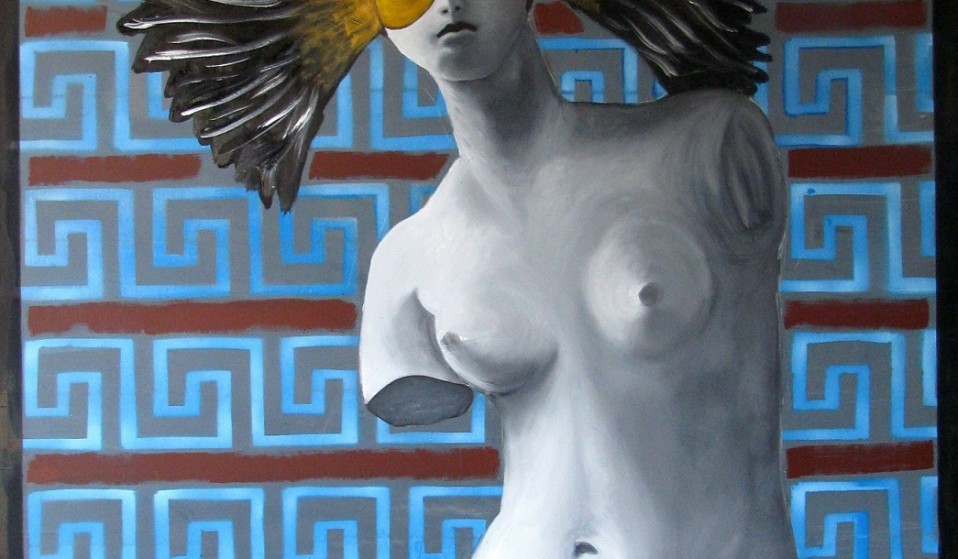 Street artist Bleeps.gr was making street art long before the economic crisis hit Greece. But with the social and cultural impact of the nation's turmoil, his art has reflected the changing views of the dissatisfied voices he comes into contact with. His identity is anonymous, but he won't stay quiet.

Street artist Bleeps.gr was making street art long before the economic crisis hit Greece. But with the social and cultural impact of the nation's turmoil, his art has reflected the changing views of the dissatisfied voices he comes into contact with. His identity is anonymous, but he won't stay quiet.

As paint chips off of aging buildings on the streets of Athens, decay gives way to colour. Street art is ever-present in the ancient Greek capital, towering over the city on housing blocks and reimagining great swathes of the city’s architecture.

Bleeps.gr has been at the forefront of the Athenian street art movement for over a decade. Growing out of the still-thriving underground graffiti scene in Bristol in the mid 00’s, his work has spread beyond his home in Greece to every corner of Europe. He has, typically, kept his identity under wraps – it’s a part of the game – but he refuses to stay silent on the political issues that he draws out in his work. “I don’t think I can compete with the mass media and the political elite,” he tells me via email from Athens. “I won’t keep quiet though.” 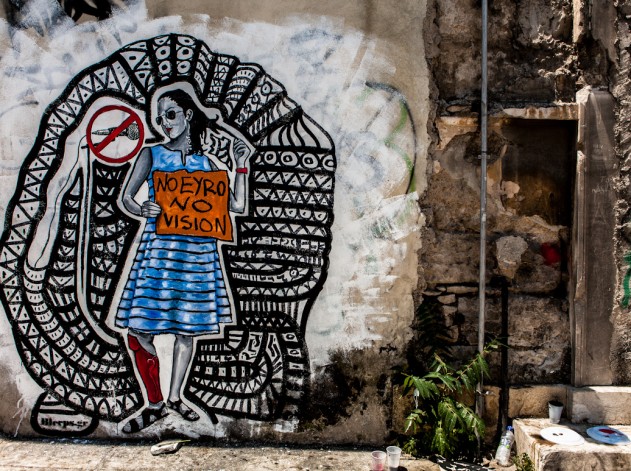 By definition, Bleeps’ work is socially involved. The use of public space at the heart of street art draws graffiti artists into a conversation about society before the content of their work has been considered. And over the last seven years, even in the last week, the existence and content of Bleeps’ work has been intimately concerned with the economic crisis currently dominating media coverage.

It’s easy to paint the current Greek economic crisis in block colours. On the left, we’ve mostly united in favour of SYRIZA, seeing them as the radical alternative to the country’s hawkish creditors and the European Union. And on the right, the general consensus seems to be based somewhere between misinformation and old-fashioned racism, painting the Greek people as lazy, tax dodging and, as a result, the architects of their own downfall.

“Will you people stay in this path or jump off the train? Pardon us, we forgot to mention that the train is going fast.”

But Bleeps paints a very different picture of the situation on the ground. He did not participate in Sunday’s referendum put forward by the government – “a fiasco in the first place” – and says the only source of encouragement that he found from the situation was the high abstention rate. The referendum, he says, was “entrapping voters to express their opinion on a single pathway provided by the marching neoliberal policies: ‘Will you people stay in this path or jump off the train? Pardon us, we forgot to mention that the train is going fast.’”

This commitment to non-participation in the political process set forth by either Greek or European authorities manifests itself in his art. Though he’d been creating art before the financial crisis became apparent in 2008, he says his worked changed shape as the turmoil “forced people to look around for alternative type of discourse.” That discourse is grounded in activism and its artistry. 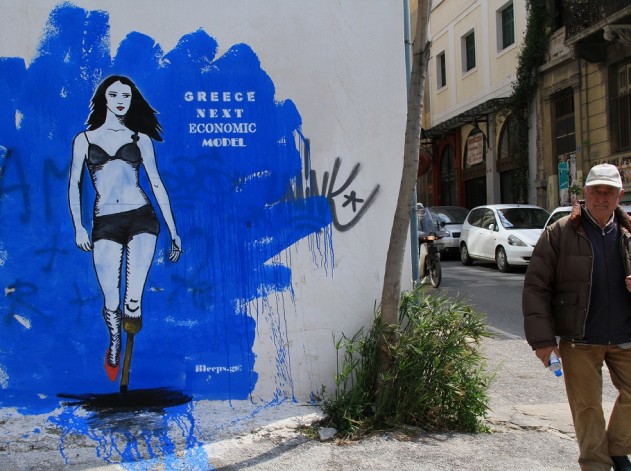 He is sceptical of a global media portraying Greece in foreign terms, an institution that he says aims to “support, fortify and spread their capability to form a global consciousness. The reality presented abroad is hyperealistically nourishing a viewer with a burger and a beer in hand. Independent voices cannot reach vast majorities of individuals.”

The situation, he says, is being poorly portrayed and, in turn, misconstrued globally: “I think historians in the future will accumulate all the details of the present and provide a more unconstrained description of what has actually happened.”

Check out more from Bleeps.gr

Linkedin
RELATED ARTICLES
OTHER ARTICLES
As the Scottish government announces a rent freeze, an activist with Living Rent who fought and won shares how they did it, and what must come next.
In his 2008 series, the photographer pictured himself as Angela Davis, Martin Luther King Jr., Malcolm X, and other prominent figures.
With skyrocketing rents, packed out viewings, bidding wars and more, renting in London has never been harder.
For over a decade, gamblers have won big by employing people to place live bets from the court. But does this dubious method still work?
Ahead of the release of their first collaborative album, the producer and rapper talk psychedelics and the state of UK hip hop.
Birdy Chu reflects on documenting the historic moment in which the territory was formally passed back from the UK to China.