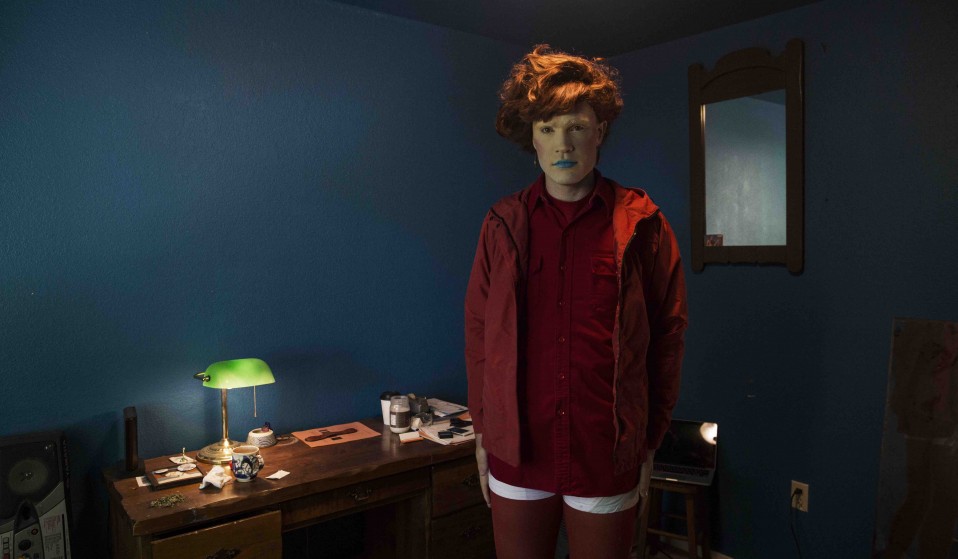 Guy Henry Mueller is channelling the countercultural roots of California’s drag scene to flip perceptions. But guess what? He’s not gay.

Guy Henry Mueller is channelling the countercultural roots of California’s drag scene to flip perceptions. But guess what? He’s not gay.

It’s Saturday night in Santa Rosa. A hundred or so people are crowded into the backyard of the Whiskey Tip, a venerable bro bar in this old California farm town. It’s cabaret night, with a lineup of local bands and comics on a makeshift stage, and three hours in, the drinking vibe has gotten loud and blurry.

After a particularly naughty jokeslinger exits the stage to cheering, the MC steps to the mic and announces, “Gay Henry!” The name elicits giggles as a strapping six-foot-plus fellow steps onstage in a fur coat, black tights, and cherry red stilettos, a demure Coach purse dangling from one shoulder. The powdered face glares white in the spots. “Hey everybody,” he waves goofily. “I just wanted to talk about why online dating sucks.” But then abruptly this voice switches to another, twinkishly earnest. He begins to deliver a kind of New Age soliloquy that eventually concludes with, “I do take you, precious moment, to be my moment… I… am yours.” The laughter couldn’t be more awkward, as now the voice of a small girl appears, dolefully advising among other things that “the reason we play sports is because we do not have suspense in our lives”. It’s slowly dawning on the crowd that Gay Henry isn’t speaking, he’s lip-syncing.

The performance hits a gallop, a fifteen-minute marathon of contradictory voices, boasts, observations, and weirdly channelled gestures and facial expressions. By the time he drops a show-stopping acid vision of Judy Garland belting ‘The Man That Got Away’, the crowd is screaming, the biggest ovation of the night.

Gay Henry is Guy Henry Mueller, a twenty-eight-year-old musician from the nearby hamlet of Guerneville. Populated by equal parts LGBT folks, old-guard hippies, and working-class descendants of its pioneer loggers, tiny Guerneville is a model of California tolerance. Guy grew up there. His mother, Laura, and a shifting scene of community characters were his family, watching and encouraging through years of dance lessons and music making. In his teens he formed and joined a succession of bands, admired for his abilities with drums, guitars, keyboards, songwriting, what have you. “He was an absurdly talented kid,” says a family friend.

In this hothouse atmosphere he was also accustomed to the theatrics of local drag queens. These included the Russian River Sisters of Perpetual Indulgence, a genderfuck contingent of Guernevillians who regularly appear in public as glittered-up nuns. They’re town heroes for both their cracked humor and relentless fundraising for local causes. Guy refers to his hometown approvingly as “definitely a place for freaks”.

Along the way a side project took shape. “Simply from me being bored with always doing rock ’n’ roll, I started making experimental sound collage,” he says. “That turned into performing to them, with video projected onto myself moving around, kind of Butoh-esque.” Eventually the collages grew speaking voices, bits sampled from YouTube videos that he lip-synced precisely in the performances, to odd and unsettling effect.

One night with friends at an Oakland bar that featured drag shows, he was handed an idea. “The queens weren’t very good and my friends all started telling me, ‘You should do this, Guy. You’d be way more entertaining.’” He quickly saw how drag held possibilities to frame the voices he was using. Something clicked. Soon enough face powder and peculiar combinations of feminine attire worked their way in. Classic drag hand gestures and sass began flickering across an otherwise masculine surface. Guy Henry, who years earlier kids had teased as “Gay Henry”, took on the intended slur as his performance name.

Many are surprised to find that Gay Henry is heterosexual, though he paradoxically considers himself anything but straight. “My upbringing was very queer, in every sense of the word. I was raised by a wild pack of lesbians, my mom and her friends. When I came into my own I realised that I did not identify with very many straight people, even some who were close to me. I found myself constantly challenging what they had to say.” 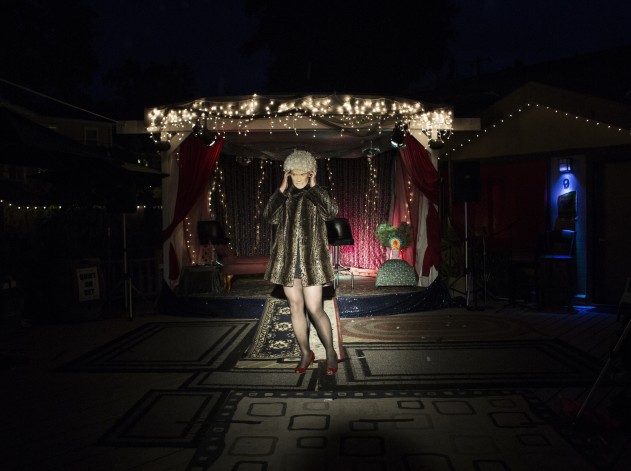 Sampling vlogs, infomercials, how-to videos, television dialogue, his performances are an antennae for the peculiar textual churn of the internet. On YouTube he came across a child on a swing singing ‘The Rainbow Connection’, his dad just inside the door on piano, mom videotaping it while prompting the kid with whispered lyrics. “I lip-synced the whispering,” he laughs. “That was at a hip hop show. I was the only non-rapper there.”

Indeed the venues for such odd work are surprising, an example of queer culture making inroads. At first he simply bombed shows guerrilla style, showing up and seeing if he could perform. “I didn’t really have any art contacts, just punk contacts. But I provided a change from their usual format. It became four bands of white dudes rocking out on guitars, and suddenly in the middle came me lip-syncing about sex and culture.” It’s punk in that it laughs at and embraces the egregious, the stupid, the human. Audiences saw what Gay Henry was aiming for, and now his name gets on the flyer too.

Women seem responsive to his dislocating sense of style. “That’s the interesting thing about stepping away from traditional drag, which is kind of I’m-presenting-as-a-real-woman-hence-aren’t-I-so-funny misogyny. Women have been made fun of enough.” And is he ever accused of cultural appropriation by the more PC gays? “Really only from reading my name on a flyer. Once they come and see who I am and what I do, that falls away.”

In a post-RuPaul world, he says, his generation has moved past old notions of crossdressing. “There are so many new drag subcultures. They’re nothing to do with what you’re seeing on television, which is being sold as the template still but is really just driving old archetypes into the ground. There’s so much more to be said now.”

Guy Henry’s story is part of Queer Habits, a collaborative multi-media documentary project about the Russian River Sisters of Perpetual Indulgence and those whose lives they’ve changed.

Linkedin
RELATED ARTICLES
OTHER ARTICLES
Photographer Becky Tyrell went down to the fading banger and stock raceway to meet a community desperate to keep it alive.
Photographer Sean Maung reflects on documenting a small town in Pennsylvania afflicted by high levels of unemployment, poverty, violence, crime, and addiction.
A recent High Court ruling against the right to wild camp in Dartmoor National Park sparked the largest land protest in history – and campaigners say their fight is not over yet.
As she gears up for the release of her first book, the 24-year-old climate activist talks standing up to authority and building a more inclusive movement.
David 'Dee' Delgado’s photo project is about honouring and uplifting the city of his youth, and a world rapidly disappearing under the relentless onslaught of gentrification.
After blocking the Scottish government’s gender recognition reform bill, Westminster is now devising further changes to the law to make it harder for trans people to self-identify.