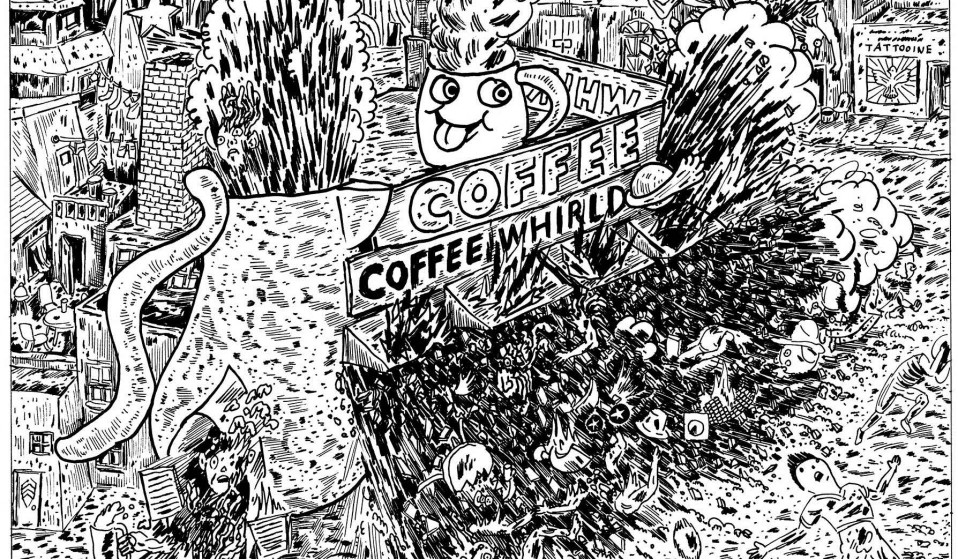 Artist and musician Brian Chippendale is a drummer in the chaotic noise duo Lightning Bolt and author of Puke Force - a riotous comic tribute to big city life.

Artist and musician Brian Chippendale is a drummer in the chaotic noise duo Lightning Bolt and author of Puke Force - a riotous comic tribute to big city life.

One of the best gauges of a comic’s quality is whether it makes you want to go out and draw comics. Like most of the stuff published by Drawn and Quarterly, Brian Chippendale’s Puke Force has exactly that effect. Starting off raw as a serial comic, Puke Force is depraved – full of messy masturbators and chemical burns.

Chippendale co-founded Fort Thunder, a massive repurposed textile factory that was home to a thriving DIY scene in Providence, Rhode Island during the 1990s.“[It] echoed a beat up neighbourhood, our rooms were handmade hovels that clustered around hallways like streets,” Chippendale tells me over email.

Lightning Bolt, a rowdy experimental noise duo Chippendale plays drums and sings (or should that be grunts? screeches?) for, found their first home in Fort Thunder, practicing, recording, and playing shows in the space.

Fort Thunder and Lightning Bolt have both found their way into Puke Force, which has an unruly amount of characters and absurd subplots converging on an explosion in a cafe but also shitty jobs, shitty punk bands, shitty politics and city life. 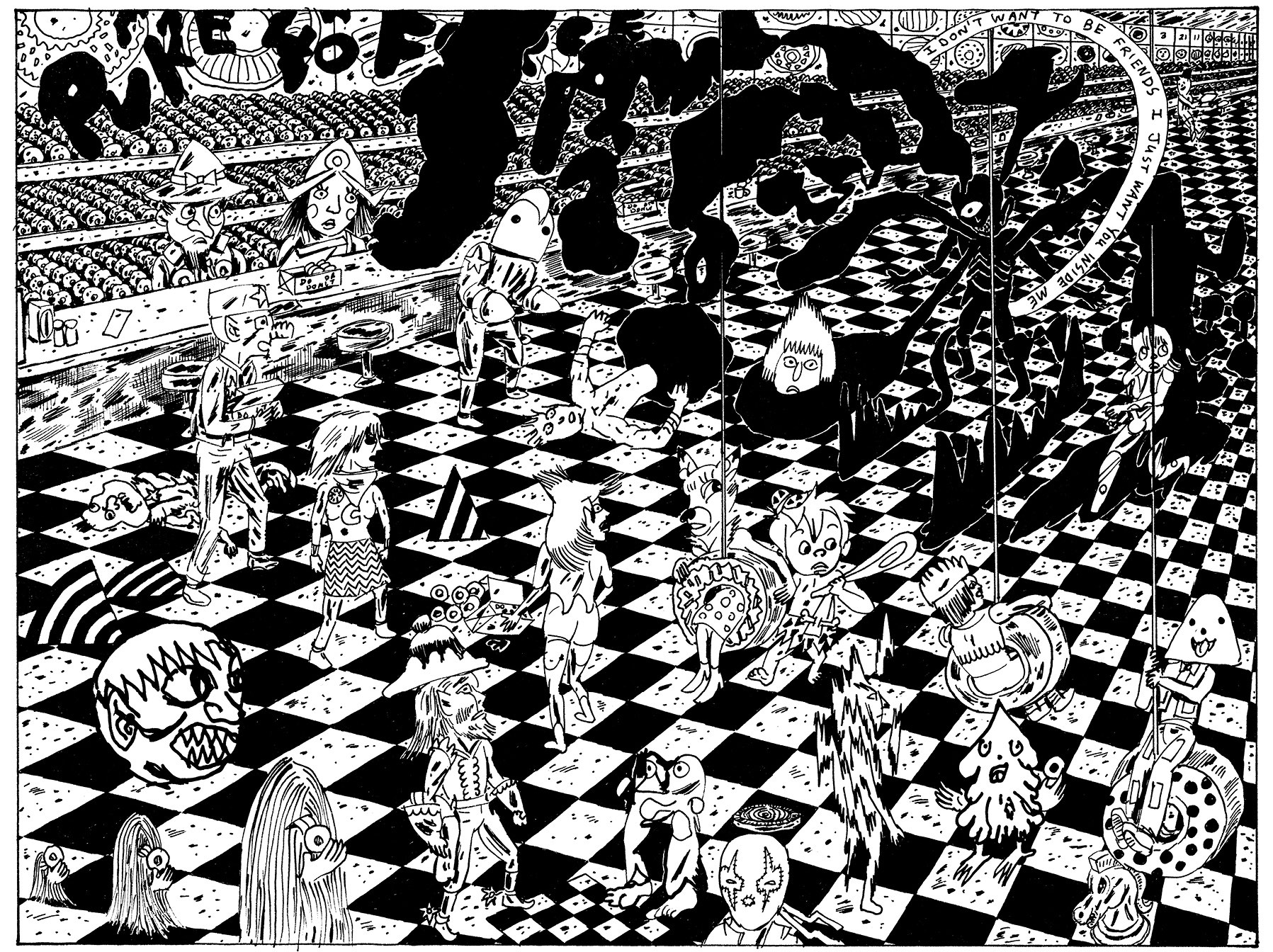 Puke Force is a world building project, but maybe that’s beside the point. “I think all art is world building really. What changes is the scale” says Chippendale. “It’s a strange position to be in – making money off dreaming up new worlds when this specific world has given you the freedom to do just that. If I lived in any of my worlds I’d probably be fucked.”

Huck spoke to Chippendale while he was on tour to talk about Puke Force.

Puke Force is sort of centred around a city –  what do you think it is about cities that make them such a hearty source of inspiration? Talk to me a bit about cities.
I’ve been obsessed with cities for a long time. Maybe because I live in such a small one, Providence,Rhode Island. Maybe because I saw Akira when I was a kid and got blown away by this imagined Tokyo; or Transformers’ Cybertron, a whole city planet. But my small city was maybe enough to give me a taste of a city and a want for more. I like the concept of a sprawling metropolis because anything could exist there. Anything could be hidden there. The city has always been the most complex character in my comics. City is a stand-in for “limitless potential”. 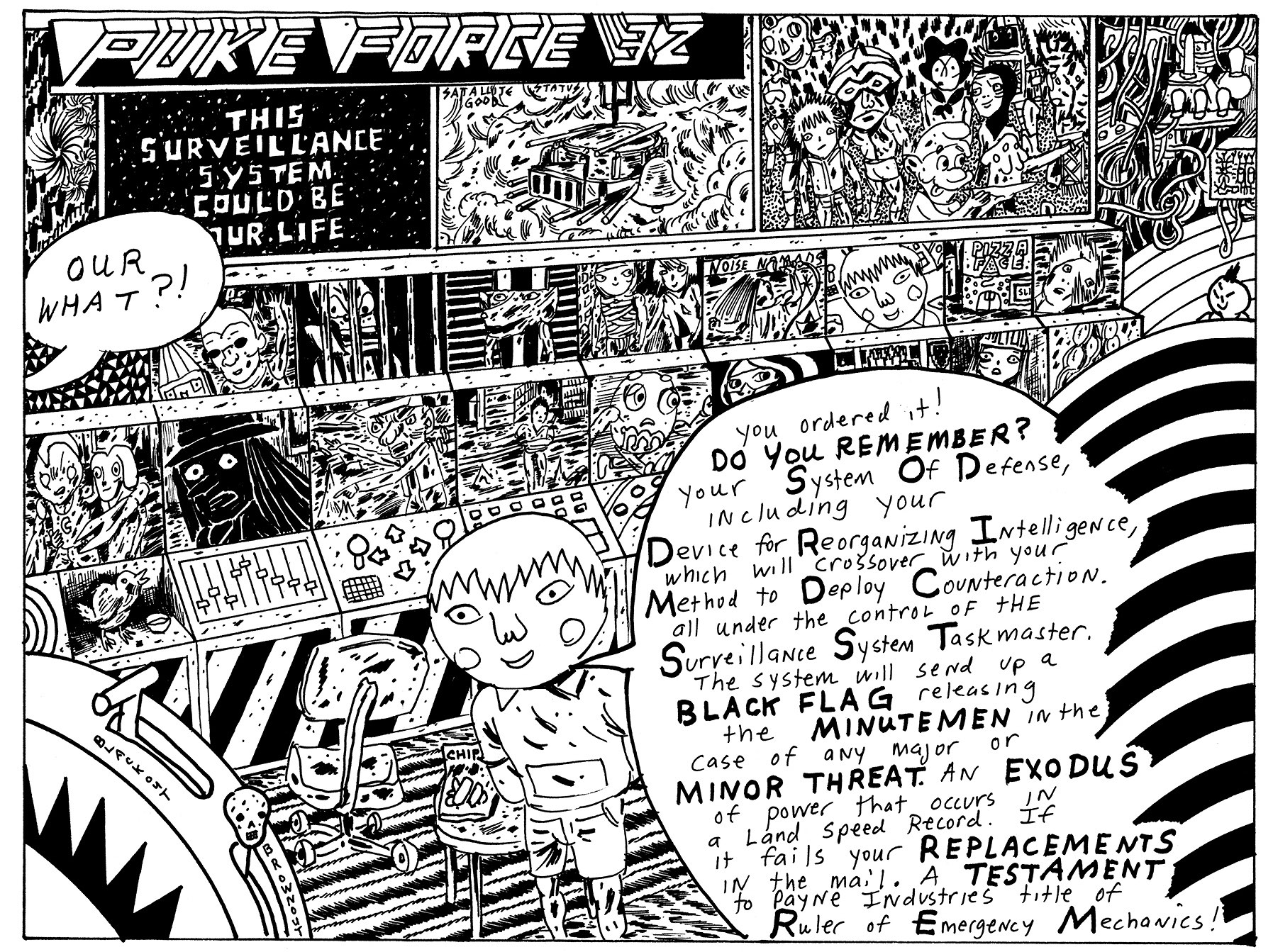 What about Fort Thunder? What was that like?
Fort Thunder was its own tiny city. Garbage town. Just a cheap warehouse space we rented full of mostly boys, cats, and weird colourful stuff we dragged in off the streets. We made a lot of art, a lot of comics, we had parties, played a lot of music. For the most part we shared a sort of cartoonish yet grunged-out Mad Max aesthetic; we were a team. A team of broke bicycle boys freezing away in a wonderland. Fairly romantic.

It was also the bulk of my twenties, and during your twenties you make bonds with people that are strong and go deep. Nothing was precious in the Fort but everything was precious. I’m so happy to have been there. 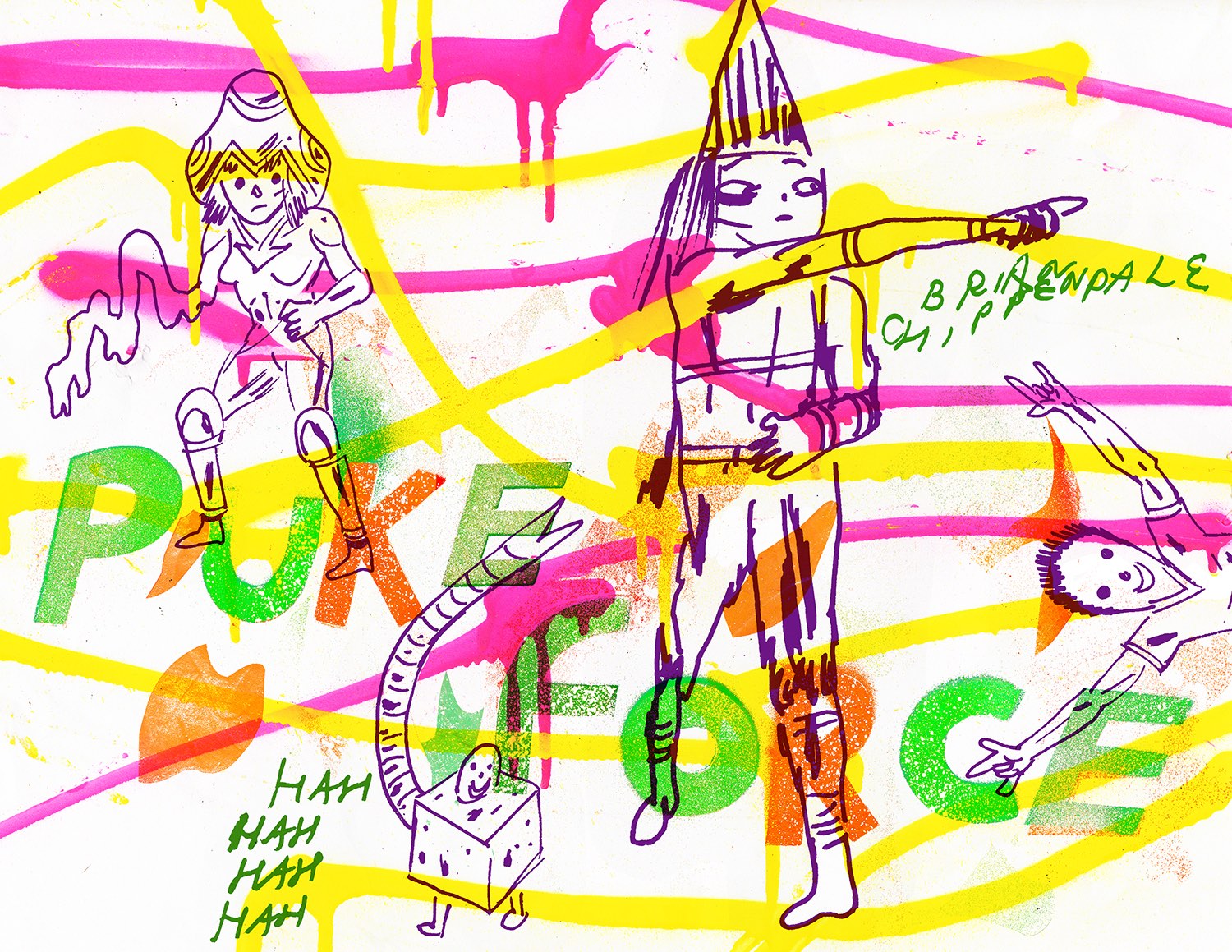 Tell me about some of the characters in Puke Force.
There’s so many! I’ll admit the characters are all somewhat secondary to the numerous plots, they kind of glide through with a purpose of holding stories together, but they have distinctions.

Probably the most established character is AW Dude. “All Wrong Dude”. His style is that he’s a guy who wears a shirt but no pants, which I think is a funny look. He doesn’t care what people think and can be quite obnoxious but he’s a kind person when it matters.

There’s Gregus Game Cube who is an out of date gaming system, basically a cube with legs and a metal arm. He’s a nice guy too. They’re all pretty nice. Gregus keeps things simple.

Babbit maybe is the leader, he also has a metal arm because his normal arm got torn off in my book Ninja. Rita is a shape-changing girl. Taffy is a girl who’s somehow tuned in to all things digital.

KK is a weird rocker girl who shows up in the middle of the book during a joke about a part of Babbit’s arm that no one noticed before. The joke being that no one noticed KK before either, even though she has been around. There’s Manny who is an M&M&M and then Budd who is a would-be assassin. There are lots of people in there. 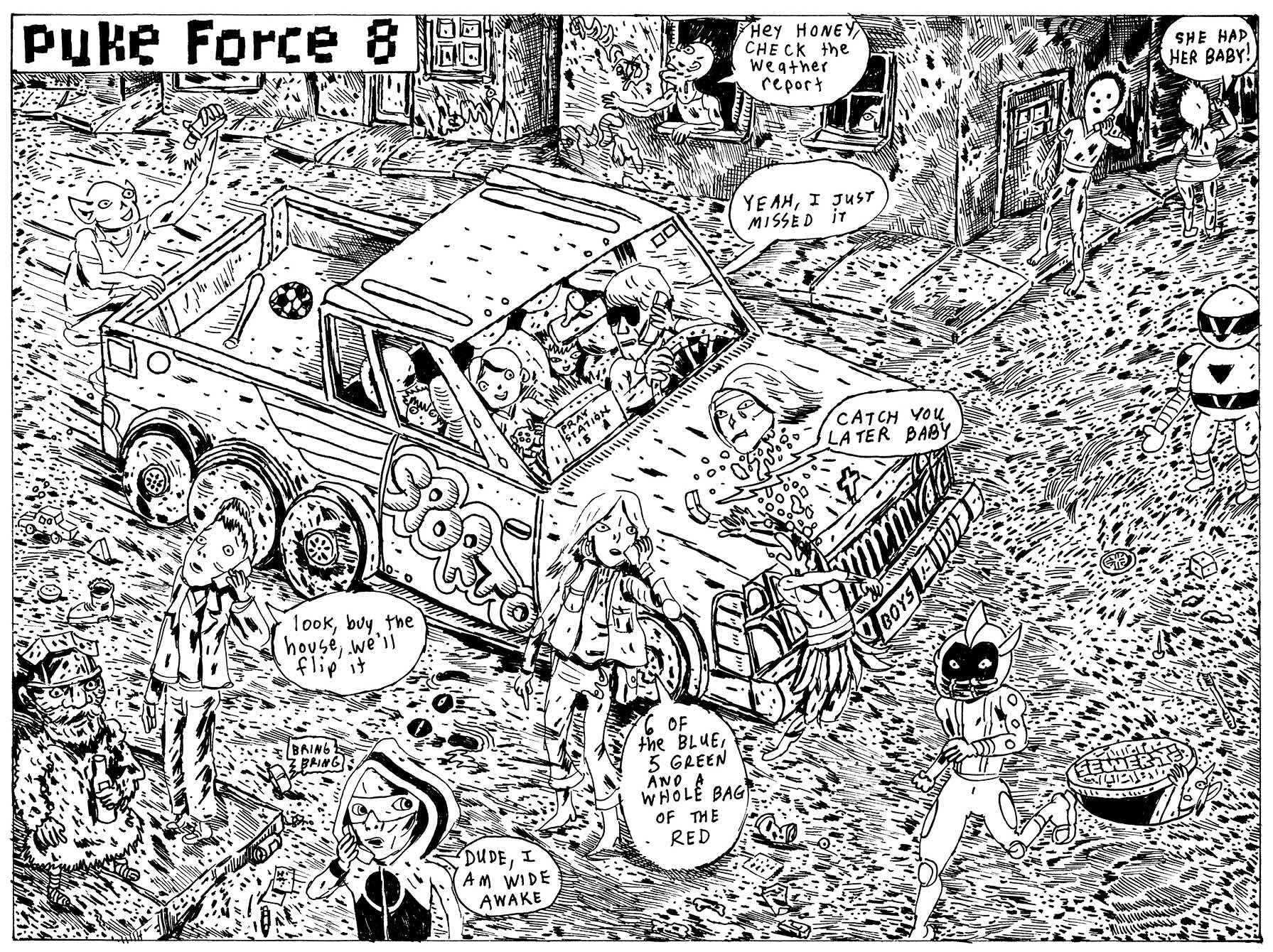 Can you describe the live shows you play with Lightning Bolt – what’s the rowdiest show you’ve played?
Historically we’ve played in the midst of the crowd and things can go a little haywire. Like drums getting knocked sideways or the bass wires being pulled out. Kids getting sliced by cymbals or whacked by drumsticks. You know, generally evil stuff happening to innocent youth.

Occasionally outlets have caught on fire or floors have almost collapsed. But we’ve survived. Amps have fallen on my head. I beat a skinhead once in London with my drumstick. Again, evil stuff. We’ve been doing more stages lately so it’s all mellow now, tables and people sitting drinking wine while we play our light rock numbers. I check my email between beats. 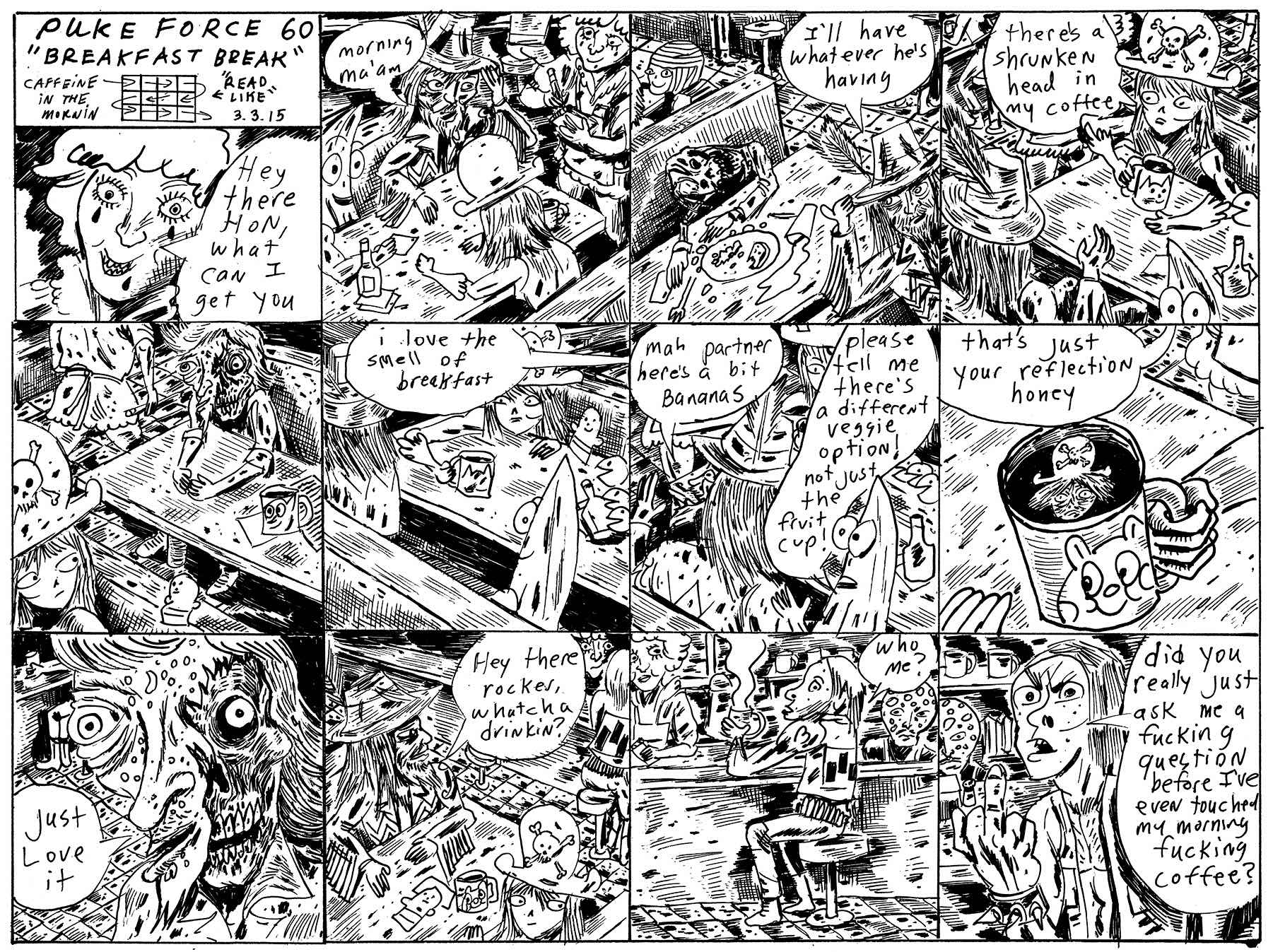 What’s your average day like? How do you make the most out of the hours in a day when it comes to doing both music and art?
I just did an art residency in an old barn in a scenic area outside of Portland, Oregon. It ruled. I would draw and work on these large painting collage things for maybe five or six hours a day and read, take walks or runs and play drums, (they had a drum set there!). That’s sort of my usual daily ritual minus the barn and the nature. Switch in a creaky old brick mill in a parking lot and add a bike and that’s life. Working on drawing, music.

I usually have a creative burst in the morning, then deal with sort of “real life stuff” in the afternoon whether it’s emails or errands. Or I pretend to work on real life stuff. Then maybe a burst in the evening if I’m not hanging out with my wife or going out to some show.

I travel a bunch each year for music or art, which is awesome but also disruptive to my creative process. But it’s healthy. I’m just chipping away at all the lingering projects I’ve cooked up. There’s no end to the shit I want to do. 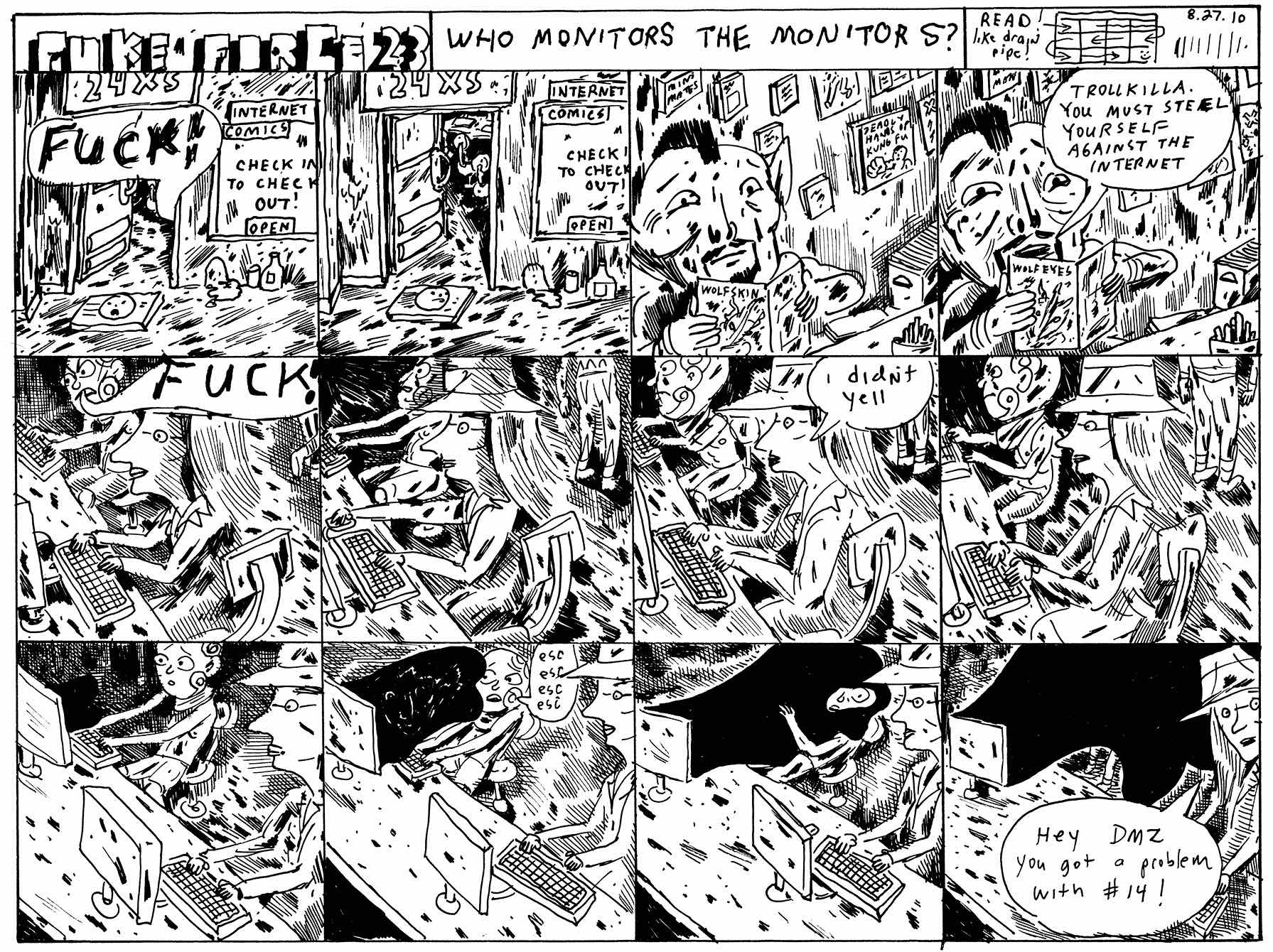 I really like the way you mess about with politics in Puke Force. Where do you see potential for interactions between art and politics? Is it better to just take the piss?
I use the comic form to distill my rage at the way things are. A lot of storylines are “ripped from the headlines” and elaborated on and filtered through my own aesthetic to fit into this world I’ve built. I think my net is cast wide enough where I can really write about anything and it will fit into the comics without a problem. That’s where the city comes in, everything is happening. Every kind of person exists and all sorts of issues are dealt with.

I get politically aggressive because I can, because politics fire me up. And I’m really just following creative fire, chasing energy. But generally I take bad things and mix humour into them so they come out somewhat funny and twisted. I don’t really think my comics can make a difference politically, I’m not really trying to preach.

I’m just organising my own thoughts, having some fun with some characters, taking them on a ride and maybe taking a few other people on a ride too. If a reader gets affected by the story then that’s a bonus. I am trying to peer through bullshit, I think art can cut through to the truth of the matter. 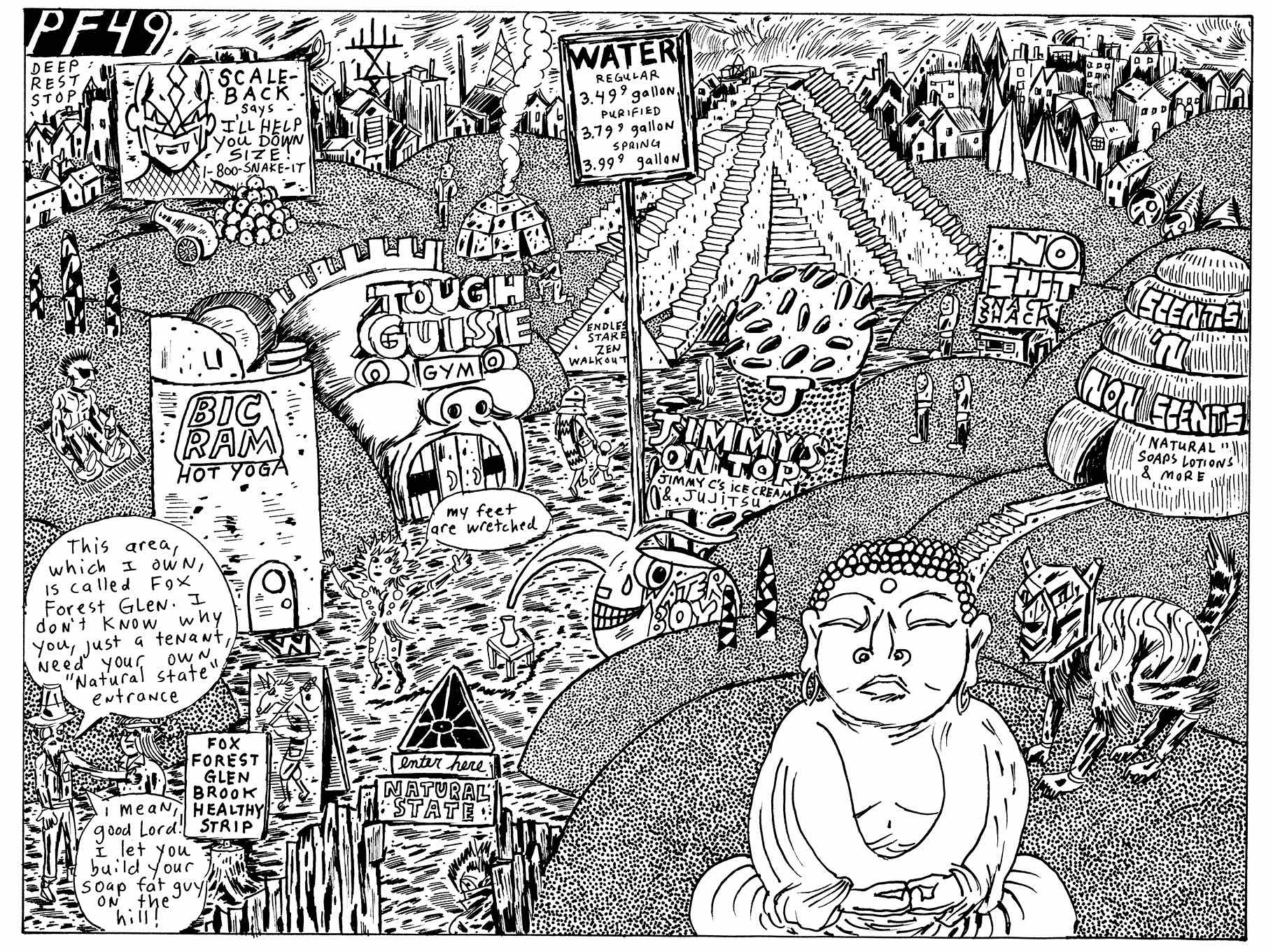 Puke Force is out now – you can find out more here.

Linkedin
RELATED ARTICLES
OTHER ARTICLES
Wealth inequality and the rising cost of socialising is placing a strain on people’s relationships, reports Eve Upton-Clark.
With inflation now at a 40-year-high of 9 per cent, demonstrations organised by TUC took place to demand action from the government.
50 years since its inception, and the campaign calling for recognition that capitalism depends on domestic labour is as pertinent as ever.
LGBTQ+ students are keeping the spirit of the original Pride alive by fighting for liberation for everyone, not just their community.
Freddie Miller’s new series of photographs investigates who today’s trainspotters are and what drives their unfettered enthusiasm.
Curator Antoine de Beaupré discusses his immense record collection and what it tells us about the intersection of music, photography, art, and commerce.