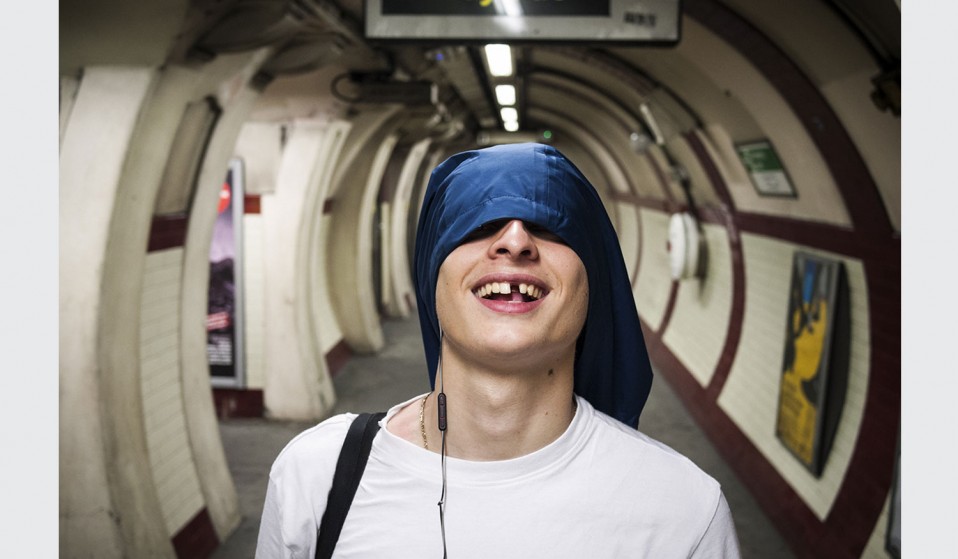 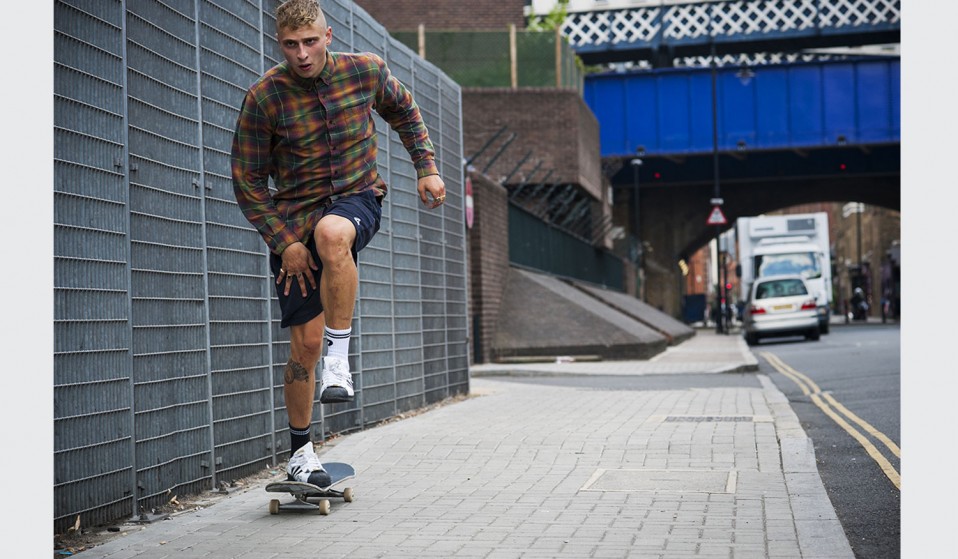 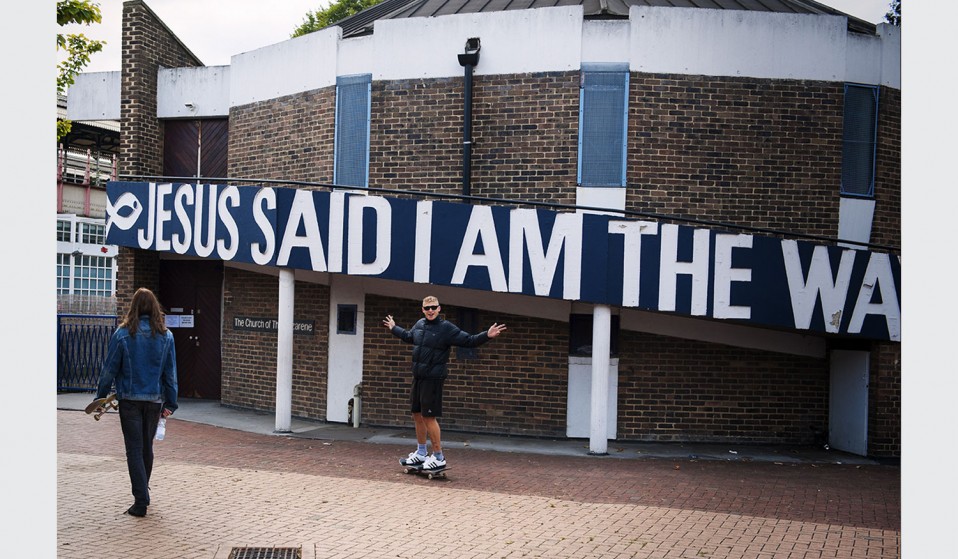 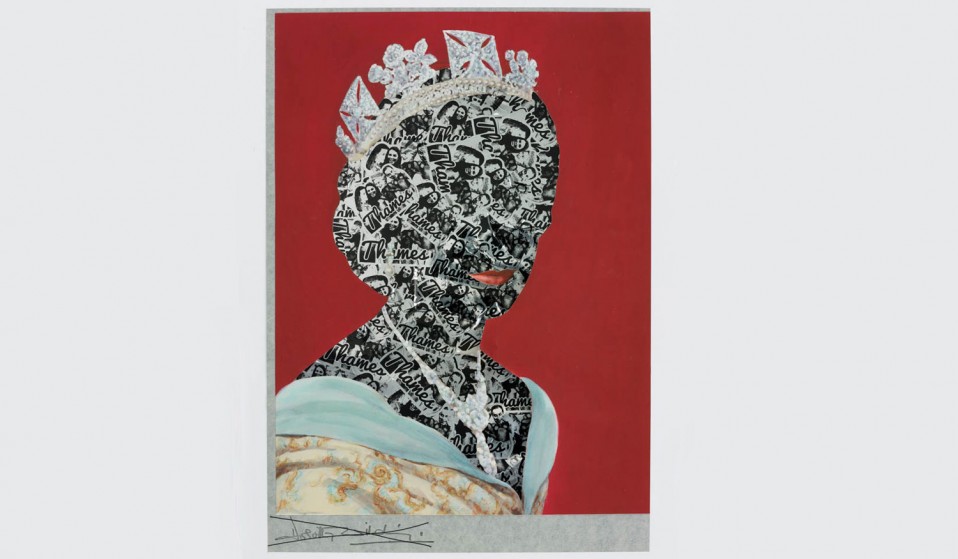 Rowdy, raunchy, bawdy and ballsy. I don’t think four words have ever made me want to attend an art show more. This is a description of 34 collages by London skater and Thames London founder Blondey McCoy, which will be exhibited this Saturday (Sept 12) at Soho’s Heni Gallery.

Acting in part as a launch for the new a/w 15 collection of Blondey’s signature brand Thames London, the show features “gleefully anti-monarchical images mashed up with the sensational bombast of the British tabloids, skateboard-style vinyl stickers and 1970s pornography that recalls the gloriously seedy heyday of the surrounding Soho streets.”

From the solitary image that’s been leaked so far the collages – which Man About Town have the post-show exclusive on – seem to recall an era of London when subversive institutions like Westwood’s SEX boutique and the Raymond Revuebar ruled supreme.

Recent closures (like that of Madame Jojo’s) and the boujification of much underground culture leave many disillusioned about Soho’s anarchic status but just this year Blondey’s sponsor Palace launched a game-changing shop on Brewer Street and events like his Thames A.D show are helping to put the lawless square of pleasure back on the map – just a week after the show London Fashion Week will descend on the neighbouring car park for its annual jazzfest (a reference I stole, like much of this intro, from the Thames A.D press release).

We caught up with Blondey to find out a little more.

How long have you been working on the collages for the show? What inspired them?
The ones I’m featuring in the show I’ve made over the last three or four months, really over about five bursts. Every now and then an idea comes along and you just see where you can take it and watch it evolve into something that’s often quite far removed from the original train of thought. It’s amazing to get on a roll. It’s a pretty big body of work I’m showing this time, 34 collages, some of them are massive too. I’m happy with all of them.

I think the whole monarchy thing is so funny, the Queen is such an icon and she’s interpreted so differently by all walks of life. Also whether you like them or not the monarchy has, in the same way religion has, always had such an impact on creatives. Some cases more obvious than others, for example the monarchy style thing is clearly linked to the late ’70s punk, ‘SEX’ scene in London, which is something Thames as a brand is massively influenced by overall.

Can people buy them?
Everyone’s welcome to buy them of course, I have an online gallery going up on the Saturday, where you can see the whole show and spend your money. We’re also making a perfect-bound book that’ll be available on the night and on the website too, which is going to be really good, and two special T-shirts as well.

The show seems like a real celebration of Soho – there’ve been loads of closures recently but do you think with events like yours, the Palace shop opening etc., it could be having another heyday?
I think there will always be entertainment in Soho. It’s always been that way, and as far as I’m concerned, geographically and traditionally it’s the only place certain types of entertainment can exist. For more youthful things like Thames, it’s not only the environment to surround yourself with, but to pay homage to as well.

For me there’s no other option, I work in Soho, my work is inspired by Soho, therefore I need to exhibit it in Soho, and always have done. As much as things move away or get forced out of business I hope there’ll always be new young things coming in like the Palace store, to sit next door to Randall and Aubin and Lina stores.

Do you think LFW moving there is a good thing?
Definitely, a change of scenery is always nice… and for the reasons I just mentioned, it’d be ridiculous for it to move and go anywhere else, haha.

What can people expect from the new Thames A.D a/w 15 collection?
Well there’s a couple of really graphic tees that are specials for the show. Aside from that the next line is much more personal, in that I put my own hand into it a lot more. There’s merky hawaiian style hand painted shirts, some with shiny stickers sewn onto them. A few of them will be exhibited in the show. There’s good denim, a bunch of embroidery as usual, and the first ever Thames jacket coming out, which is next level. Obviously still some illustration based and foil print based jersey too haha. All very graphic, Im really happy with it.

What are you up to next?
Going pub.

The Thames A.D exhibition opens at the Soho Heni Gallery, 6 Lexington Street, Soho, W1F 0LB, this Saturday September 12. You can keep up to date with all things Thames on their Instagram.