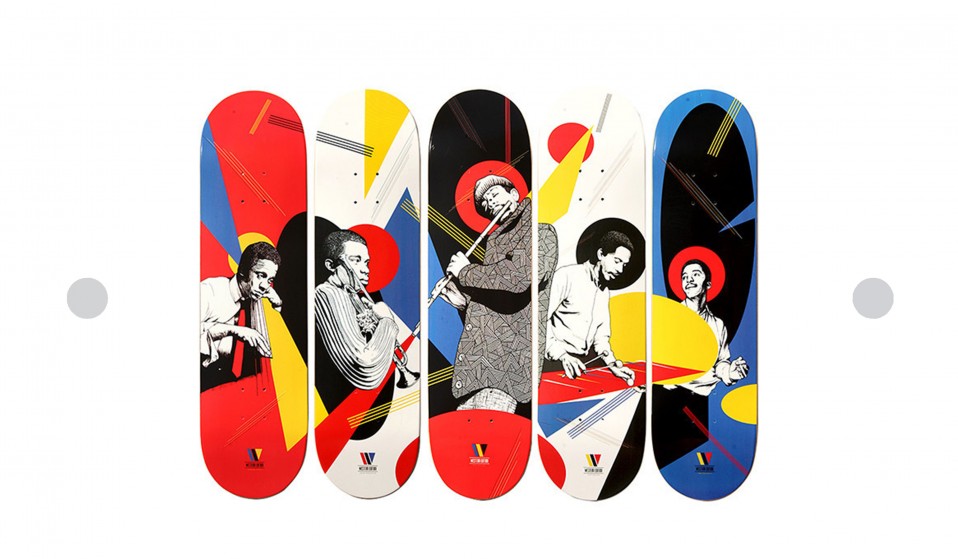 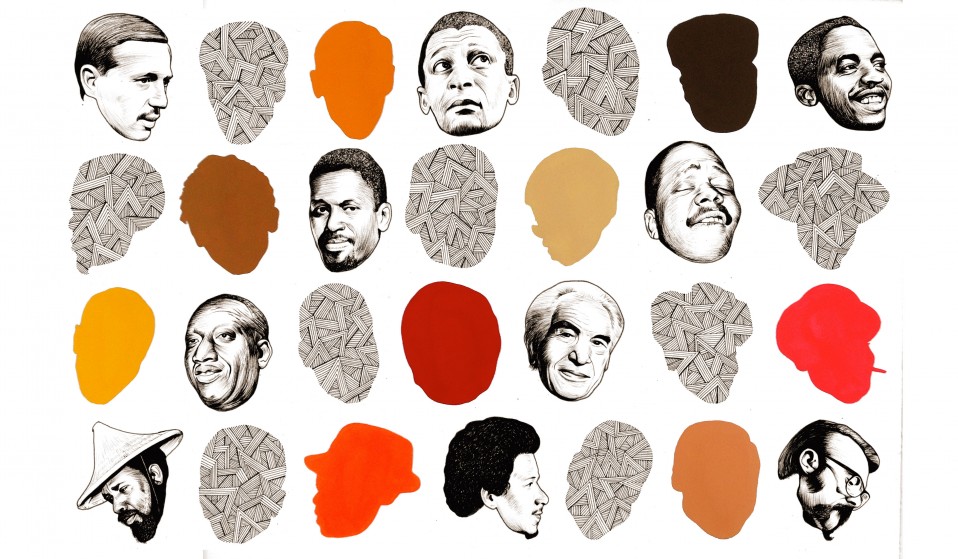 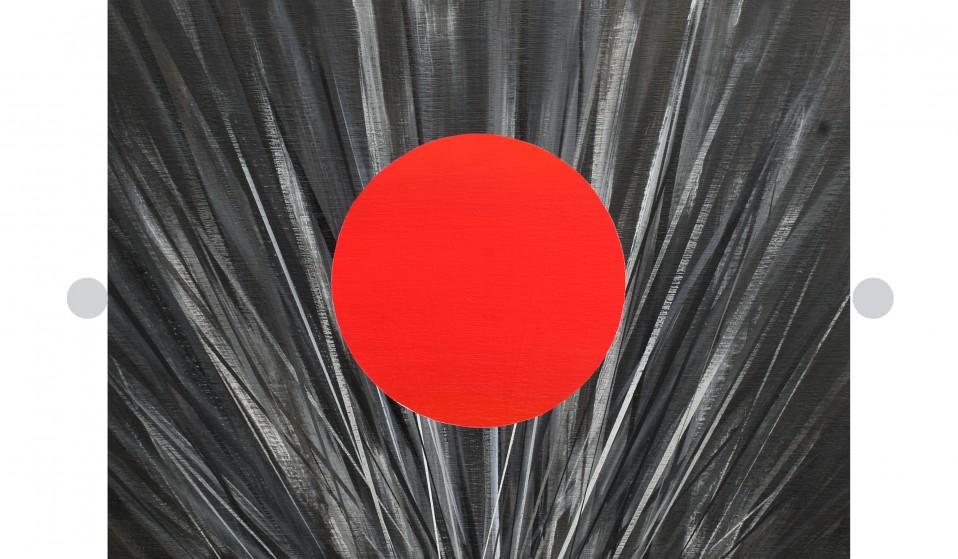 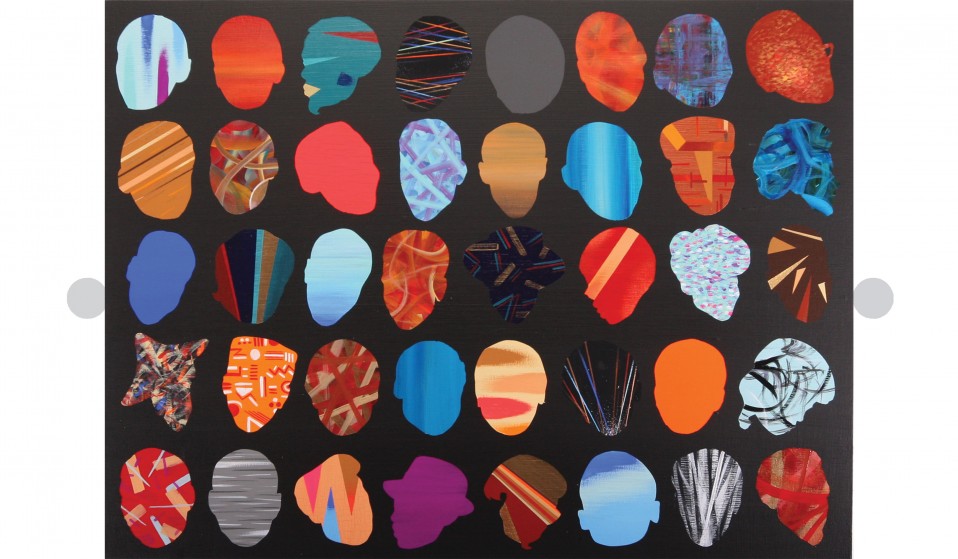 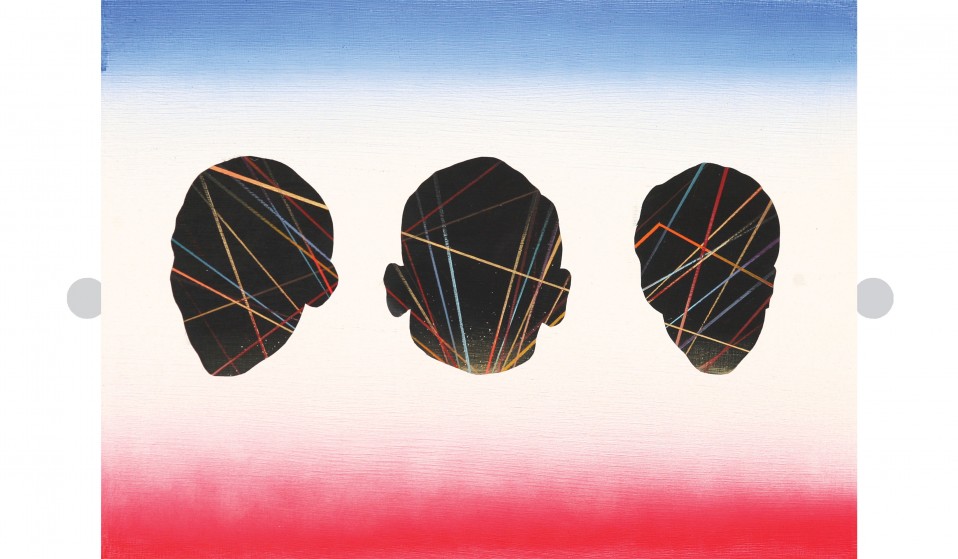 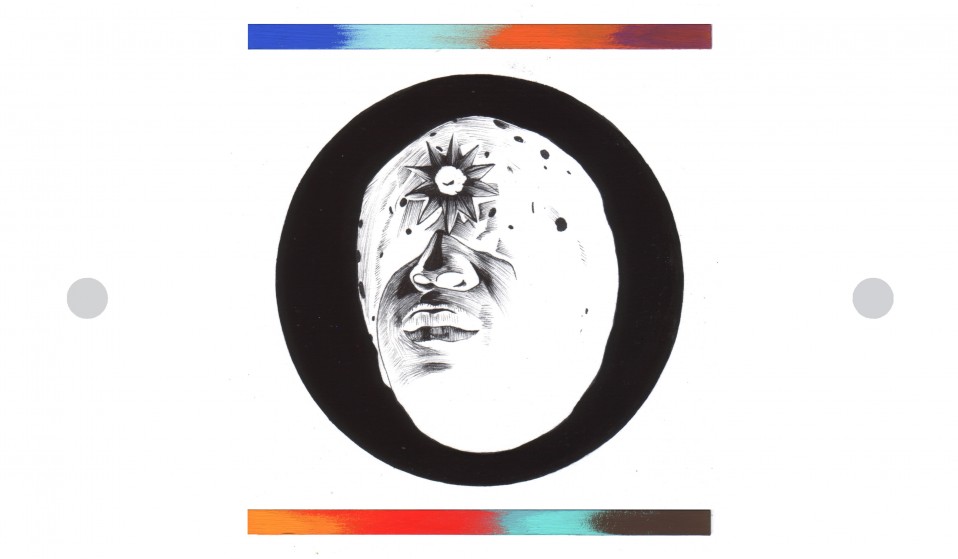 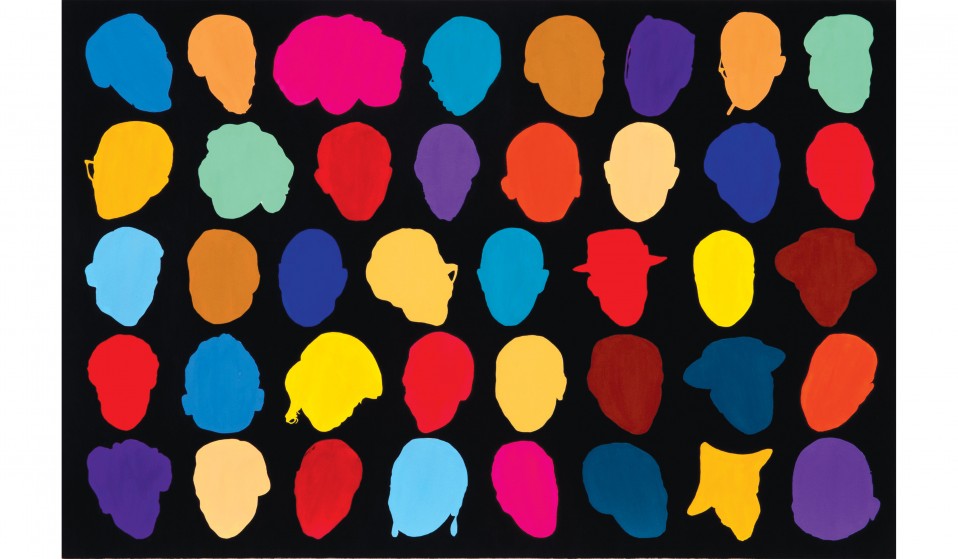 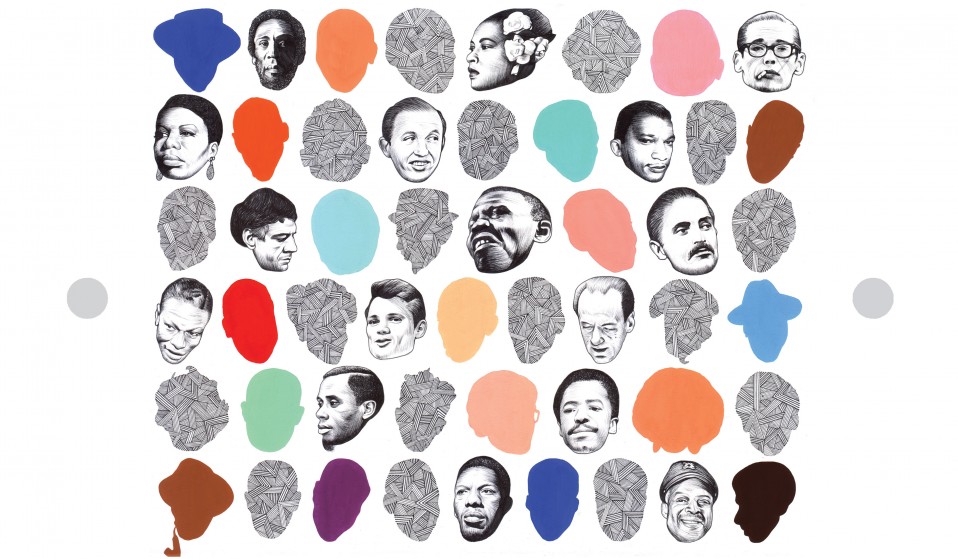 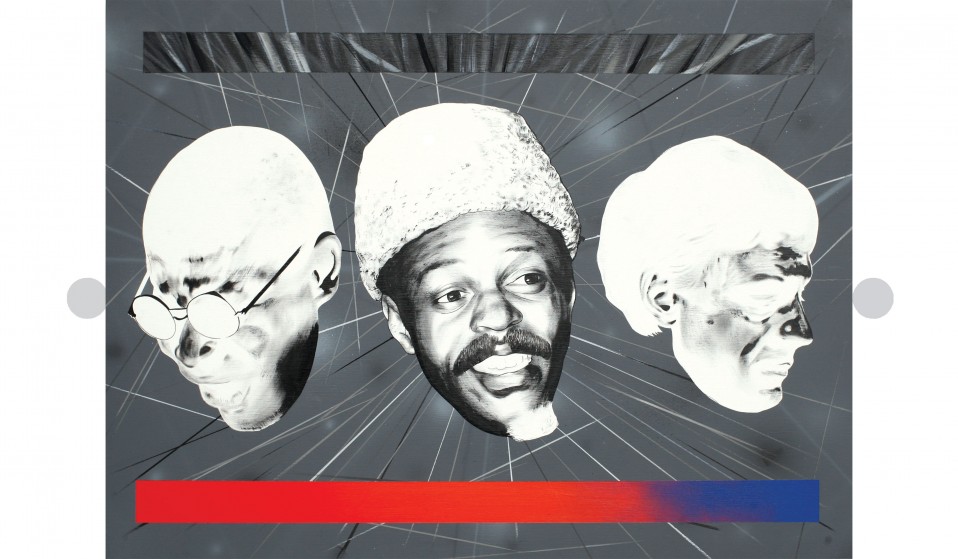 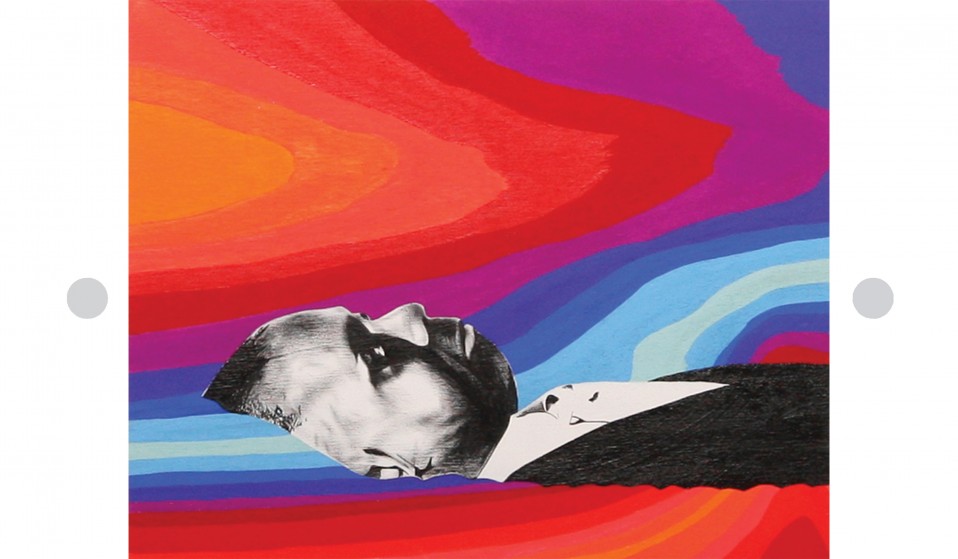 What’s your skateboarding soundtrack? For artist Ian Johnson, it’s the free flowing melodies of jazz that echo through his mind as he cruises the streets of San Francisco.

Skateboarding is most commonly associated with punk and hip hop, but jazz has had more of an impact than you might imagine. Aside from having a huge influence on both punk and hip hop, jazz’s free-flowing melodies and its emphasis on improvisation helped inspire Mark Gonzales’ revolutionary free-form approach to street skating – a debt he acknowledged by choosing John Coltrane for his part in Blind’s legendary Video Days.

Ian discovered jazz through skateboarding and the pair have gone hand in hand ever since. In his personal work and as creative director of Western Edition Skateboarding, Ian has been celebrating jazz’s pioneers and personalities in his distinctive style, which blends black and white portraits with colourful abstract geometric patterns.

Ian founded Western Edition in 1999 with Kent Uyehara, after moving to the City by the Bay from Syracuse, New York, and it’s the only place you’ll find a team series that pays tribute to Eric Dolphy (above), or see Billie Holiday, Sun Ra and Marvin Gaye-inspired boards.

Ian was recently selected to create the visual identity and the RIP tribute montage for Gilles Peterson’s Worldwide Awards at KOKO on Saturday, January 17, so we thought it’d be a good time to ask about his influences and inspirations.

This was a skateboard video by Stereo that came out in 1994. It pretty much changed the course of my life. It featured a primarily jazz sound track and used 8mm black and white film and photos. That kind of mid-century beatnik aesthetic resonated strongly with me and led me to start buying jazz albums and working backwards to learn about the music. I had had jazz around me as a child with my grandfather listening to it on the radio, but it wasn’t until this video that I really took to it and pursued it more seriously. 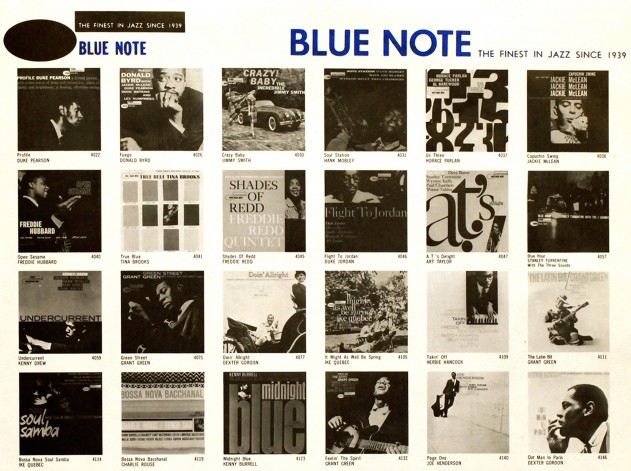 Once I got into jazz this was where I started. I love the label’s output from the 50’s and 60’s, the Reid Miles designs, Francis Wolff’s photos, Dexter Gordon, Art Blakey, Horace Silver, et al. Their music and style always seemed so sophisticated and continues to feel that way. 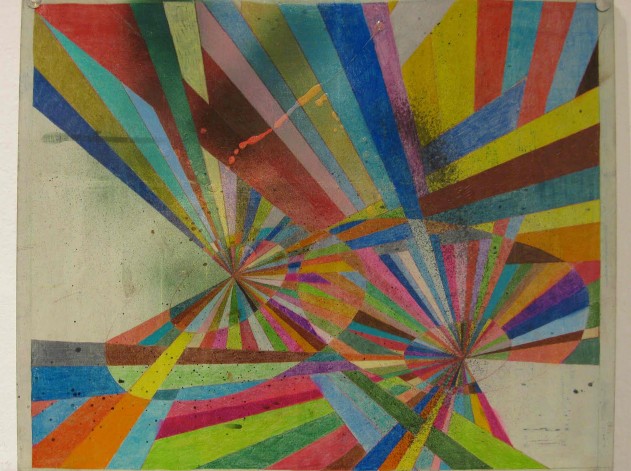 Barry McGee, Alicia McCarthy, Chris Johanson, etc. They were all doing really cool stuff when I was kid and moved to SF. Although my work tends to be a bit cleaner than some of them, elements of all of a lot them had a part in me developing my aesthetic.

Just a seemingly endless source of ideas and sounds. He made over 1000 songs and 100 albums that range from big band to pure noise to solo piano to spoken word and everything in between. The solar myth never ceases to offer something new all the time. 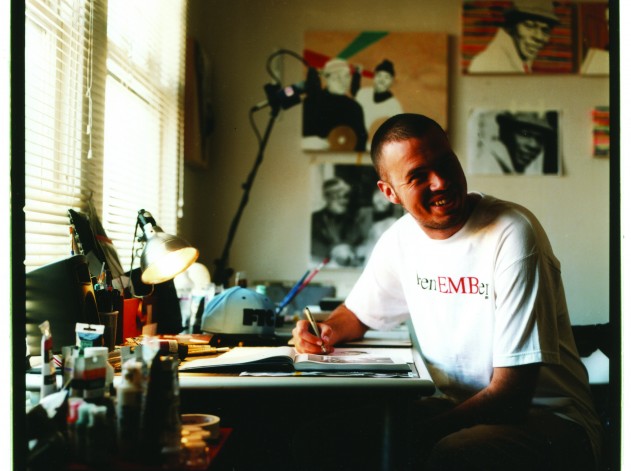 Ian in the studio

I come up with most decent ideas while drinking in my studio after my family has gone to sleep.  It’s easy to let your mind wander in the low light, listening to music and just thinking about what you can do and where you can take your work. I can’t actually execute it at that time then and there, but I do feel quite inspired about possibilities at the time.

Check out more of Ian’s art or see his RIP tribute montage at Gilles Peterson’s Worldwide Awards at KOKO on Saturday, January 17.

Linkedin
RELATED ARTICLES
OTHER ARTICLES
A new law change is enabling Britain’s donor-conceived children to know the truth about their origins – but campaigners say the fertility industry must do more to protect people.
Photographer Sean Maung reflects on documenting a small town in Pennsylvania afflicted by high levels of unemployment, poverty, violence, crime, and addiction.
Filmmaker Laura Poitras discusses her new documentary which traces the remarkable life of the artist-activist and the impact of her battle against the US opioid crisis.
Photographer Becky Tyrell went down to the fading banger and stock raceway to meet a community desperate to keep it alive.
A recent High Court ruling against the right to wild camp in Dartmoor National Park sparked the largest land protest in history – and campaigners say their fight is not over yet.
Tristan O’Neill’s shots of dancers caught in moments of reverie at the height of rave’s golden age are a testament to the UK’s legendary club culture.